artist li wei uses body as his artist medium of choice, a blank canvas in which in which he performs like a chinese version of ‘evil knievel’. his ‘falls’ series which began in 2002, has now become his most known body of work – a combination of performance art and photography. the series depicts li wei falling from the sky in various global locations, with head and chest embedded into the ground and legs erect, as if he were a human rocket that just crashed down on earth. all of the images are real. none of the art is computer generated. only the scaffolding and wires which keep him upright are the only things cropped out of the photos.

the work is a commentary on china’s continuously changing and unfamiliar society – the country’s globalization and rapidly changing economic and natural landscape, combined with personal concerns such as disappointment, family, happiness and love.

‘if you picture someone falling to earth from another planet, there would really be no soft landing, whether the landing were in china or in another part of the world. this feeling of having fallen headfirst into the unknown and of having nothing firm under one’s feet is familiar to everyone. one doesn’t have to actually fall from another planet to feel that way.‘ – LW li wei was born in hubei province 1970. in his late teens he moved to beijing and in 1993 enrolled at the oriental arts college to study painting. through some financial and artistic struggles, li wei taught himself photography and video and by 1997 he had adopted performance art which has become his preferred form of expression.

li wei is currently presenting his work as part of ‘china – contemporary revival‘, an exhibition at the palazzo reale, milan, italy. on display is a selection of more than 180 art works including paintings, sculptures, installations and videos by 50 contemporary chinese artists. on now until february 7, 2010. 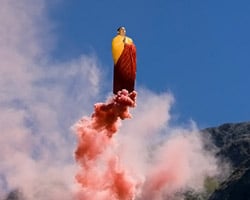 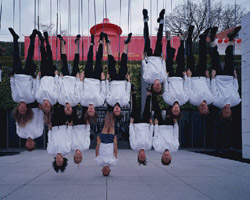