fiberglass figure from ‘my we’ 2011, commissioned by the singapore biennale 2011 image © designboom

the work of filipino painter louie cordero embodies contemporary manila culture by mixing together indigenous traditions, spanish catholicism and american pop culture, all stemming out of a long tension and history of colonialism. in the 2011 singapore art biennale cordero’s usual paintings of monsters and fantastically colored portraits take a secondary role to his cast fiberglass figures, graphically and fantastically impaled with as many ‘first-world’ cast off objects as could be found. blending visceral gore with seductive color and highly refined technique. cordero’s work draws on the aesthetics of b-movie horror films, heavy metal music, comics, local stories, street life and various mythologies offering a highly personal, idiosyncratic take on a chaotic world. 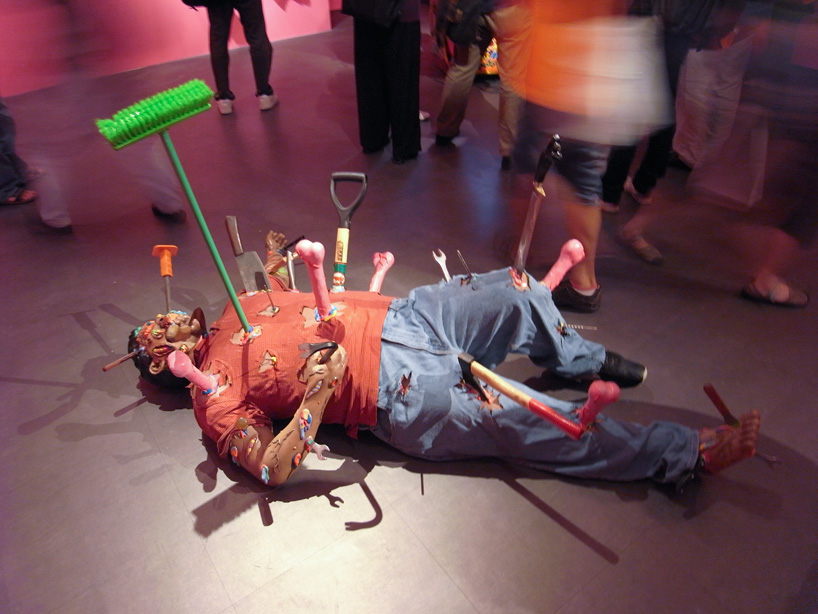 side view of fiberglass figure, metal frame with found objects image © designboomthe installation ‘my we’ comprising of four cast figures and a videoke machine  (an all in one karaoke machine, TV, and speaker system) is based on the recent spree of neighborhood violence between people singing frank sinatra’s ‘my way’ in filipino karaoke bars. the videoke machine features, on repeat, the words to the sinatra classic superimposed on video and tabloid headlines of violent fighting (and occasional murder) over how the song should be sung. 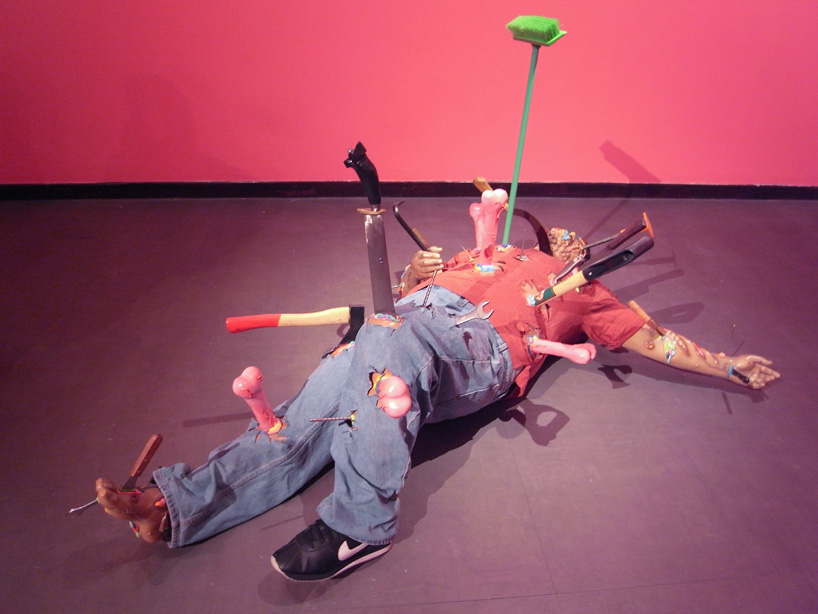 front view of fiberglass figure image © designboomone aspect of the work plays up the absurdities of a specific post-colonial situation, another milks the platitudes of ‘sorry’, chaotic ‘third world’ living, while a third aspect pays homage to the irrepressible ingenuity of humans and their instinctinve ability to adapt…the symbiosis of life and ruin, gaudiness and beauty, glut and control, are characteristic of much of louie cordero’s work. it is a raucous mix of sensory stimuli and local histories and (sub)cultural phenomena. (words from isabel ching, of the singapore biennale 2011 catalog) 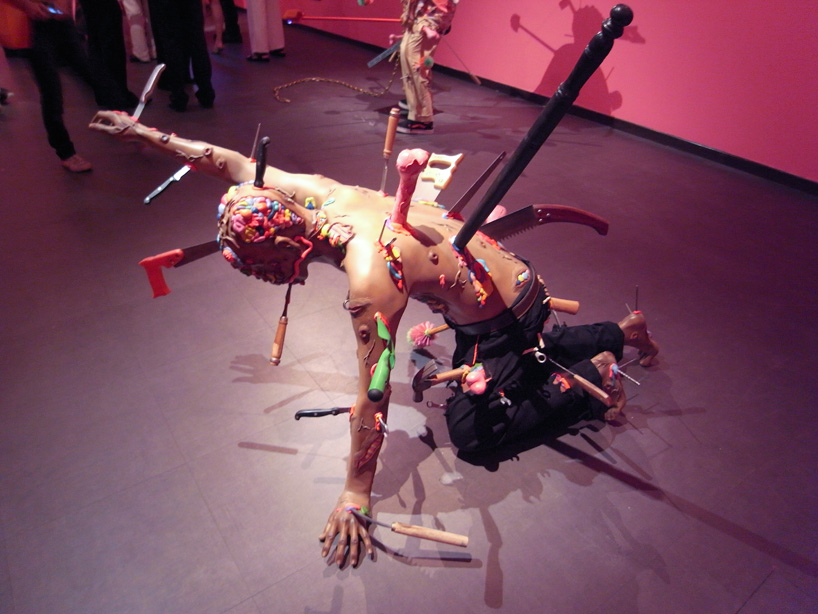 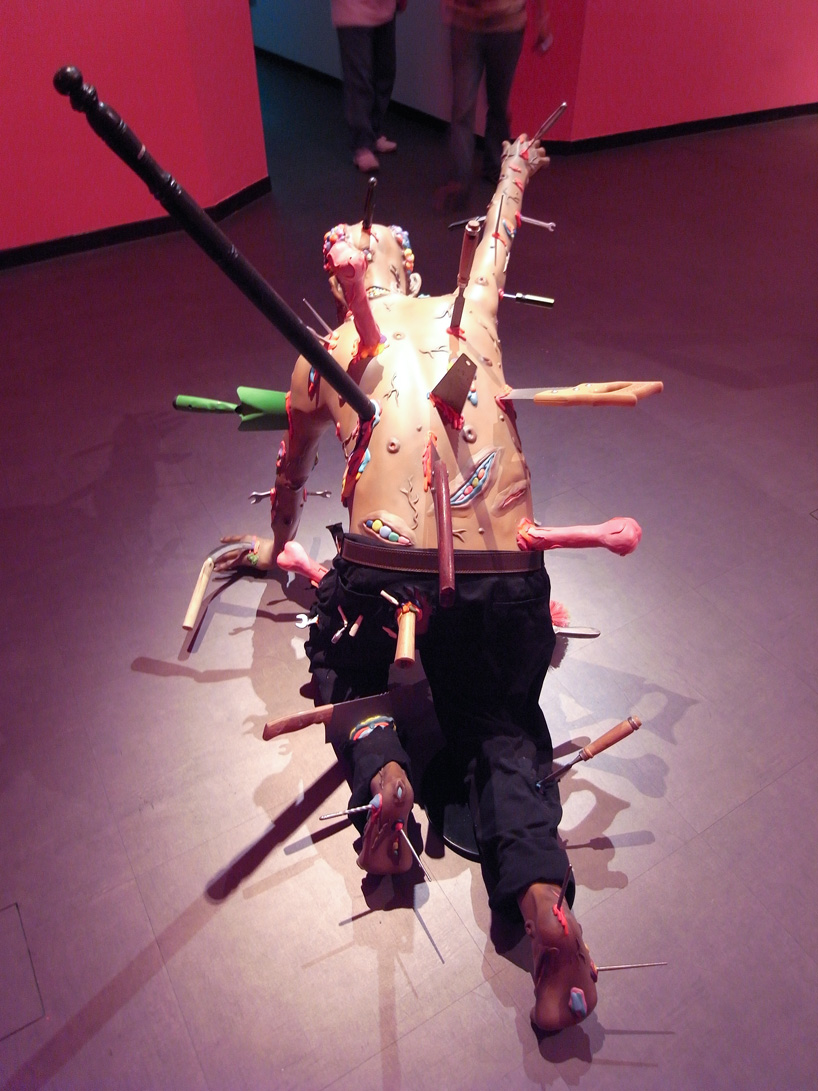 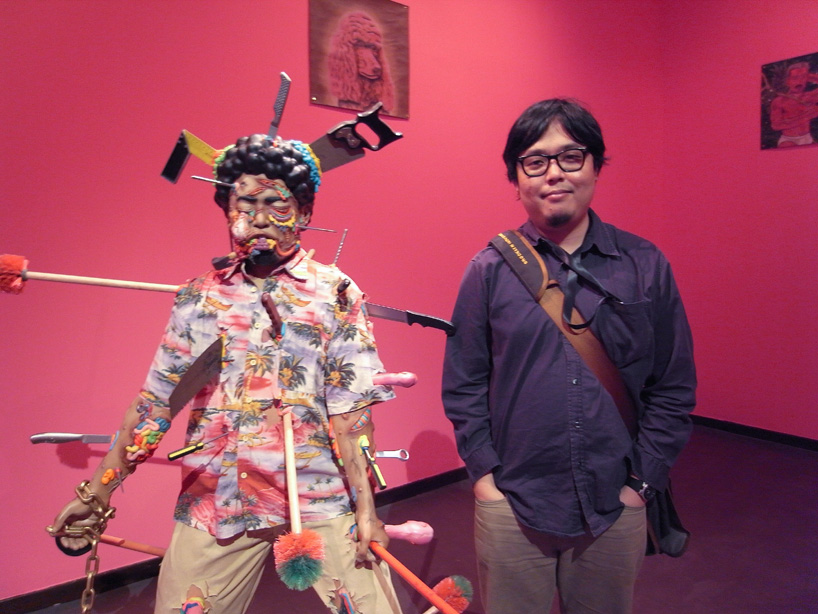 cordero with one of his fiberglass figures portrait © designboom 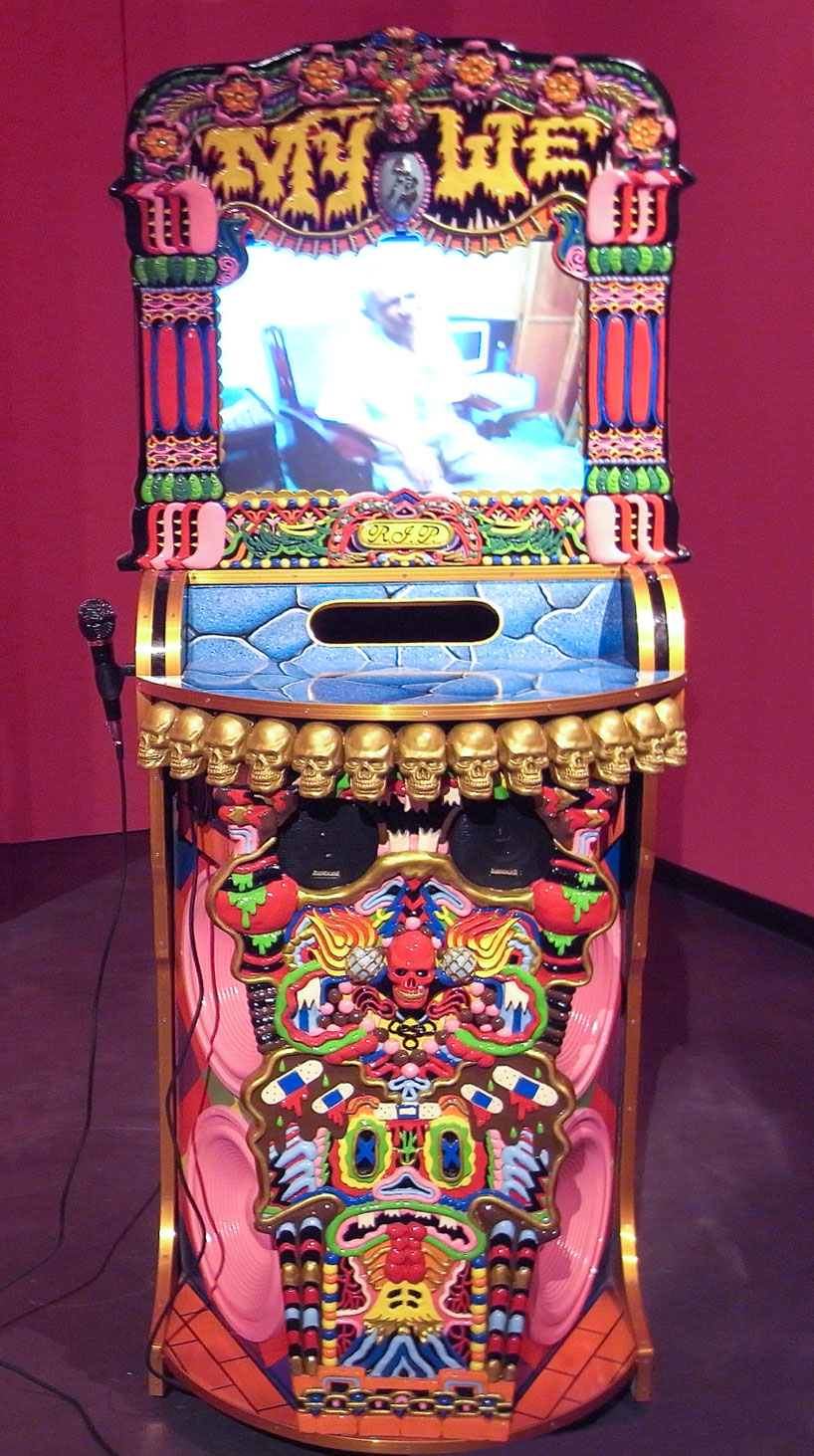 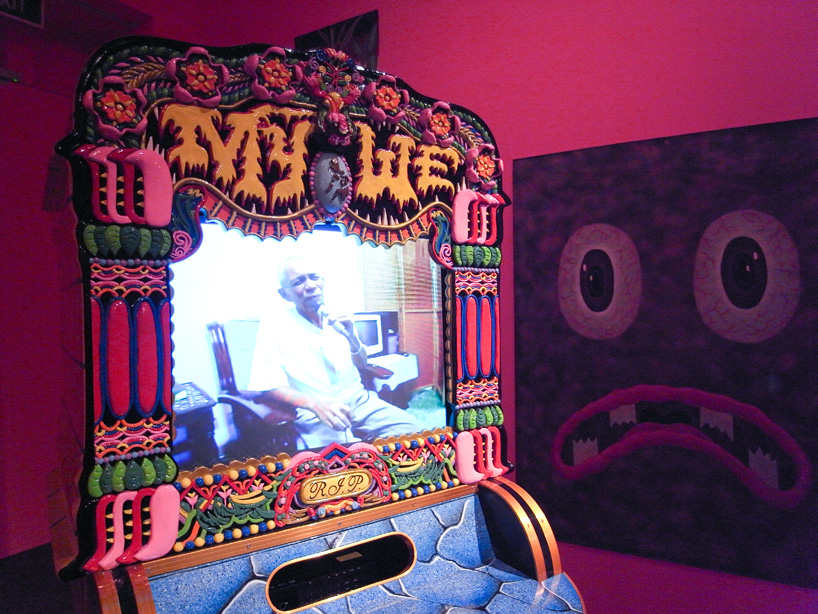 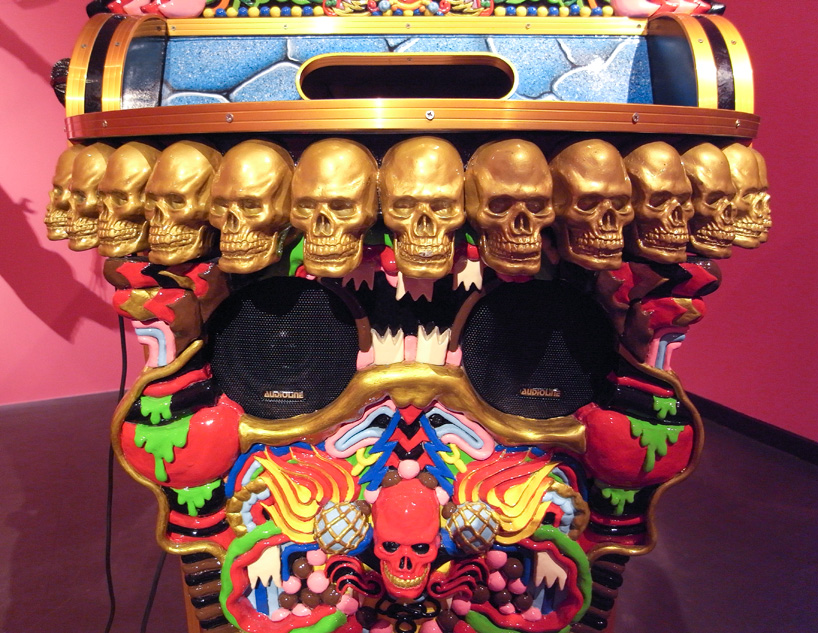 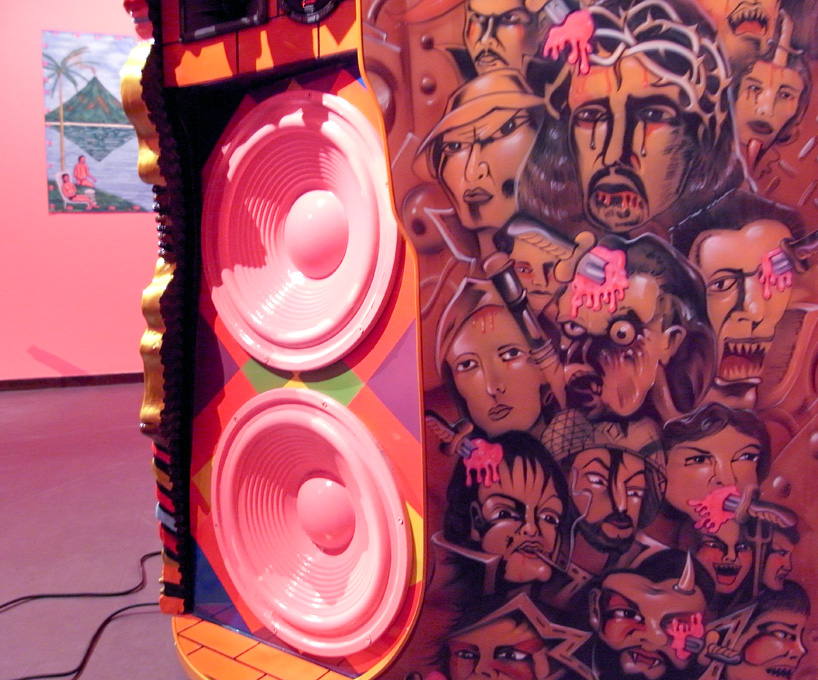 one of the side panels image © designboom 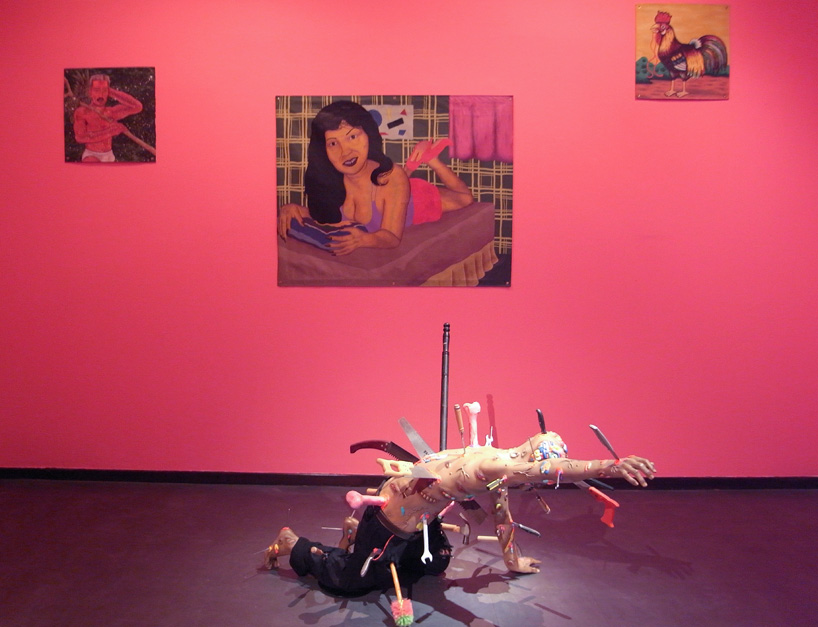 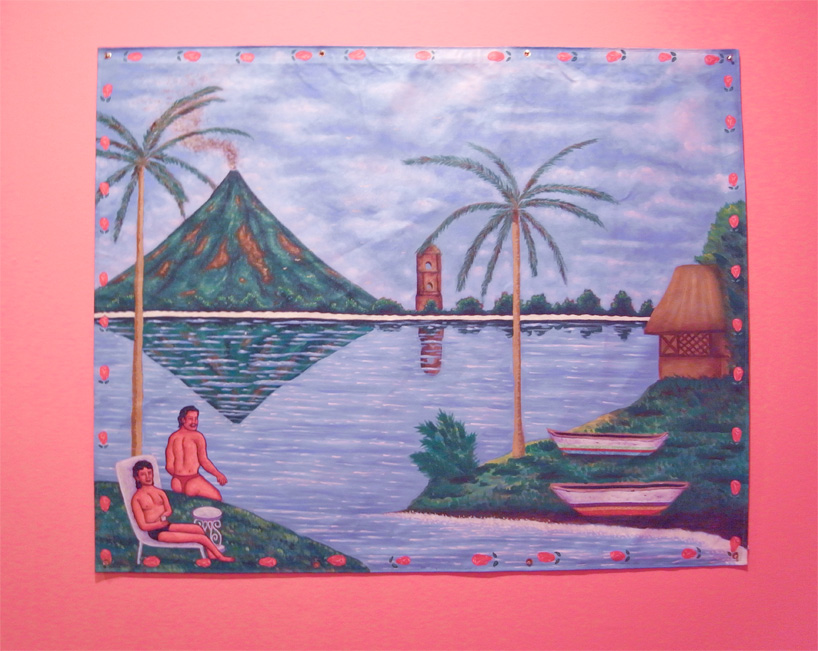 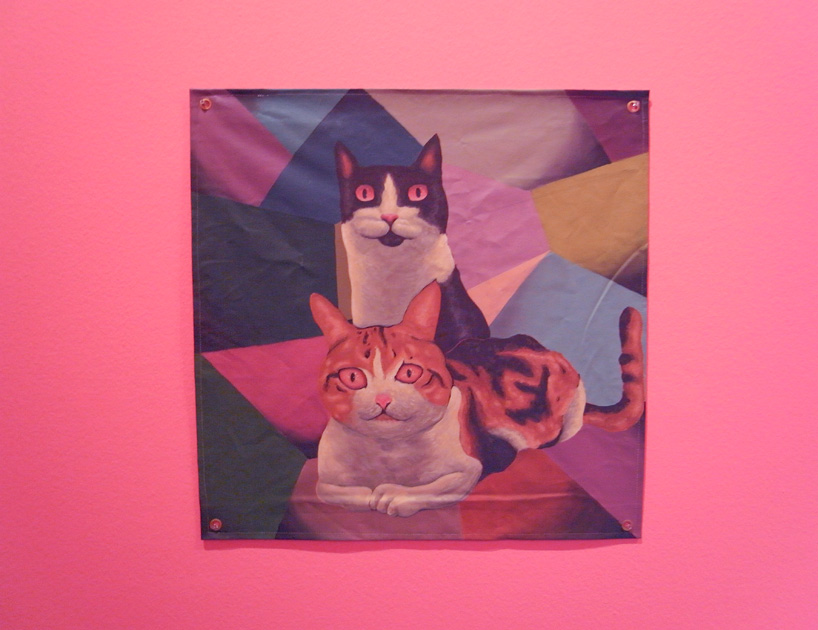 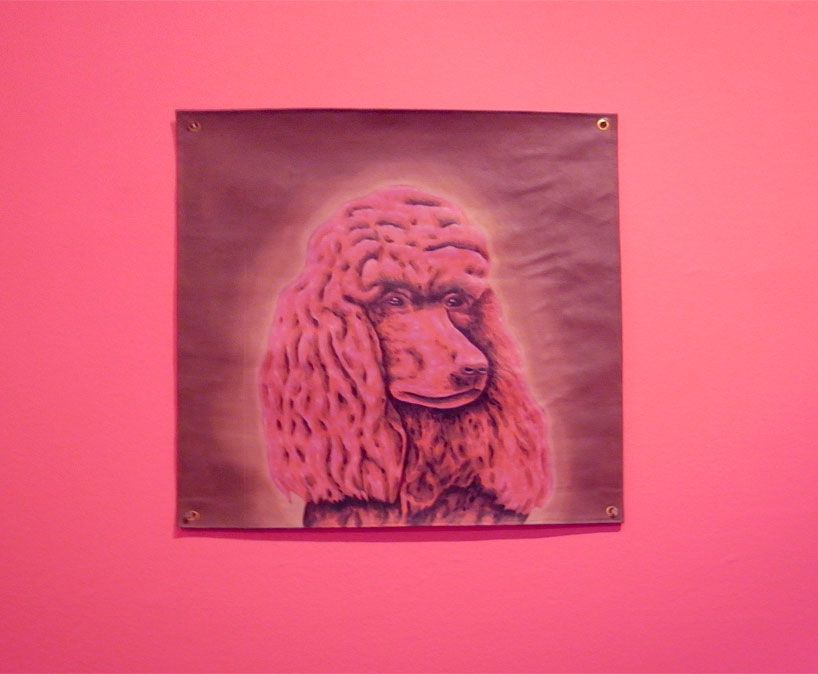 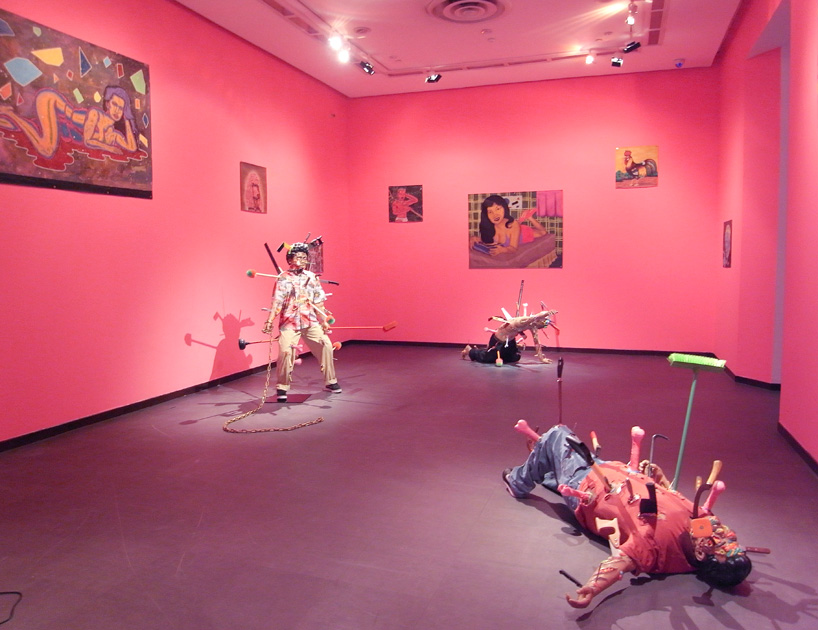 the exhibition in whole image © designboom

before meeting cordero at his exhibition, designboom first encountered his work through his comic fanzine ‘nardong tae’ chronicling the story of a moustached boy named bornek empowered by alien poo. basically, an extraterrestrial being excreted all the things that were possible to excrete from its body and threw it at earth in the form of a comet, unfortunately directly hitting bornek. becoming feces in human form with massively destructive farts, bornek tries to move on living a normal life but eventually destroys his university after being the constant butt of everyone’s jokes, and eventually labeled public enemy no. 1. first published in 2003 by abang guard productions and also released as a limited edition vinyl figure. 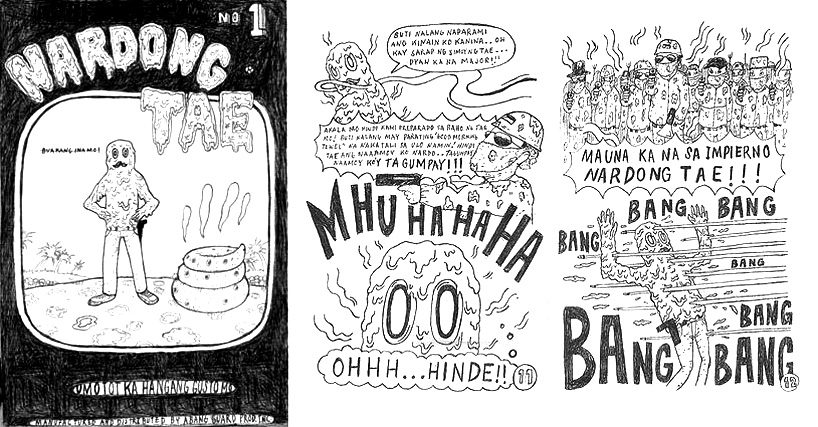 cordero has also been on an US exhibition at the new york jonathan levine gallery in 2010.