‘the global pursuit of happiness‘, or ‘the army of luck’, is an installation designed by german media artist boris petrovsky, comprised of 520 maneki neko (the japanese ‘lucky cat’ or ‘money cat’ talismans). these figurines are used in asian countries to bring luck and prosperity, and also purchased as souvenirs by many western tourists. each holds a coin or other object with its right paw, and waves with its left.

in the installation, petrovsky arranged 520 plastic cats into a grid of 40 rows and 13 columns, functioning as a kind of dot-matrix display in which each statuette serves as a ‘pixel’, with the position and speed of its waving hand controlled by a servomotor.

with the invitation, ‘your concept of happiness is our lucky command,’ visitors are encouraged to input up to 40-characters of text onto a keyboard, which the ‘army of luck’ then displays as a scrolling marquee. the letters are created by the difference in colour and form that results when certain cats raise their hands.

the installation is also pre-programmed with ‘spontaneous’ behaviours: 25 different gestures and salutations, including mass ‘mob’ activity like the ‘mexican (stadium) wave’.

in both circumstances, the display of words triggers sound samples of ‘mass or group events’: television shows, political speeches, demonstrations, sports events, and other happenings from the past century. 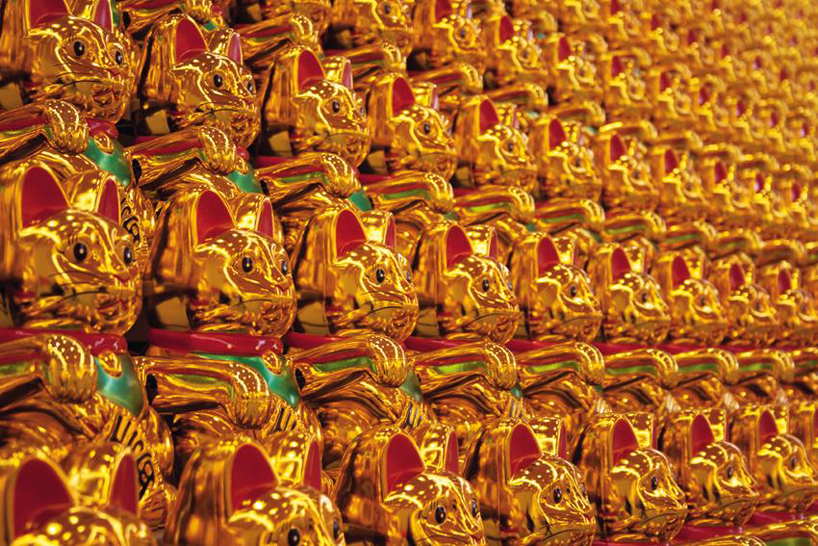 detail on the maneki neko in the installation

‘the global pursuit of happiness’ was on exhibition at the art karlsruhe fair 2012 in germany.