MOTHER OF CREATION, AN NFT TRIPTYCH BY MADONNA AND BEEPLE

Following a year of work, Madonna and Beeple have released Mother of Creation, an NFT triptych dropping today on SuperRare. The works, which feature animations of a fully-nude Madonna, explore the concept of creation, motherhood, and birth via darkness and light in our modern world. Received with some skepticism, the collaboration has many asking the infamous But Why? question. As artnet states,  ‘we live in a dystopia… and I feel nothing.’ It’s for people who live lives so media-saturated and irony-poisoned that nothing feels real.’

‘When Mike (Beeple) and I decided to collaborate on this project a year ago, I was excited to have the opportunity to share my vision of the world as a mother and an artist with Mike’s own unique point of view.’ said Madonna. ‘It’s been an amazing journey building this together from an intellectual idea to an emotional story, giving birth to art. I wanted to investigate the concept of creation, not only the way a child enters the world through a woman’s vagina, but also the way an artist gives birth to creativity. Most importantly, we wanted to use this opportunity to benefit mothers and children who are most in need right now.’

With Mother of Creation, Madonna and Beeple showcase the representation of three different forms of birth. The one-minute animations see Madonna’s Barbie-like body birth a tree in a lab, butterflies in a Mad Max-kind of city, and mechanical centipedes in an exuberant garden.

The first animation of the triptych has been titled Mother of Nature, and is set inside a cold laboratory with no sign of life. A close-up of Madonna’s digital vagina shows how a branch starts growing out of it, transforming into a full tree. While this happens, Madonna’s off-voice recites her own poetry: ‘My journey through life as a woman is like that of a tree. Starting from a small seed, always pushing against the resistance of the Earth, the endless weight of gravity… I’ve taught myself to be supple so that I won’t break….’

Titled Mother of Evolution, the second work alludes to the metamorphosis of a butterfly, hinting that even if the world is burning down, there is still hope. ‘We continue to give birth, no matter what destruction is going on, no matter what oppression we face,’ comments the official release. ‘It relays the important message that if you are waiting for the world to be perfect or for your life to be perfect to create art, it will never happen.’ The video is voiced with lyrics from Madonna’s iconic song Justify My Love.

The last work is Mother of Technology, and this time, Madonna births a swarm of centipedes in a lush forest while naked with black stilettos. The idea behind this animation is that ‘science can also give birth to light into the world, but only if used with the right consciousness.’ The centipede is the representation of technology, alluding to both its creative and destructive powers. The work features the poetry of Rumi.

The proceeds from the sale will benefit three nonprofit organizations — The Voices of Children Foundation, The City of Joy, and Black Mama’s Bail out — picked by Madonna and Beeple to further their missions in supporting mothers across the globe. Moonpay, whose infrastructure supported the creation of the triptych, will also contribute to each charity.

Since the beginning of time…….. Leaning into a new virtual world with @beeple

Check back here on Wednesday May 11 at 3pm PST / 6pm EST for the nativity. NFTs dropping on @superrare.

‘I was thrilled to connect artistically with Madonna to create this series of artworks,’ said Beeple. ‘Our collaboration was really natural and we shared a creative vision that has been so gratifying to realize and now share with the world.’ 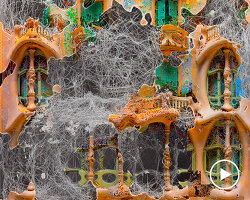 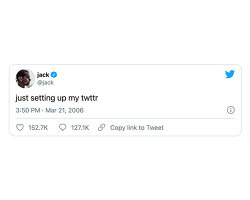 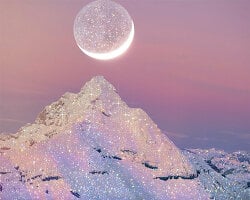 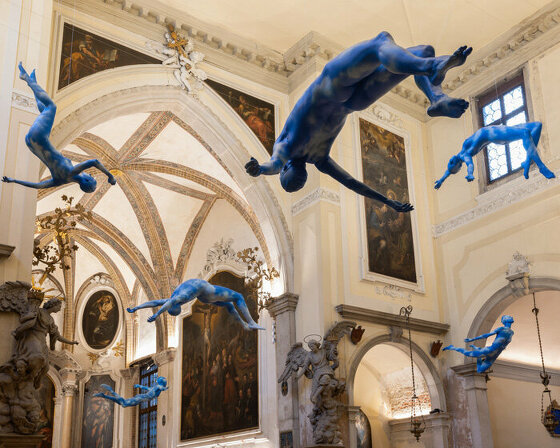 May 08, 2022
ugo rondinone brings human clouds, a gilded sun and colorful, burnt out candles to venice
set inside the historic scuola grande san giovanni evangelista, the exhibition seeks to 'dazzle us and send us into a deep reflection about the marvels and mysteries of life.'
art
415 shares
connections: +240

Apr 27, 2022
10-rule manifesto by ai weiwei for empowerment and freedom of mind
manifesto is a campaign on WePresent which invites activists and creatives to spread their message through '10 rules to live by'.
art
414 shares
connections: 81

Apr 26, 2022
louis vuitton takes over venice's historic news kiosks during the biennale
the temporary takeover is part of an initiative to celebrate these much-loved newsstands and return them to their former glory.
art
291 shares
connections: 81