qzina specialty foods has created the world’s largest chocolate sculpture in the form of temple of kukulkan at chichen itza, an ancient mayan temple found in modern day mexico. the massive dessert work weighs 18,239 pounds– this surpasses the previous record set in italy in 2010 by more than 7,500 pounds. the chocolate piece was developed for the company’s 30th anniversary and the opening of their institute of pastry and chocolate.

qzina’s corporate pastry chef francois mellet and meilleur ouvrier de france stephane treand, with the support of a small team, were able to build the gigantic chocolate formed sculpture measuring six feet tall growing from a ten by ten foot base formed proportionally to the true size of the ancient temple. the piece pays homage to the mayans’ role in the beginnings of the now world-wide sweet delicacy and the two culinary artists have chosen to develop a piece accurately recreating the details of the ancient peoples’ temple.

the chocolate temple will be on display at the qzina institute of chocolate and pastry in irvine, california, USA from june 4th until the date of december 21st, 2012 upon which the mayan calendar ends and the massive dessert sculpture will be destroyed. at this point, qzina has yet to decide how the world’s largest chocolate sculpture will be deconstructed. 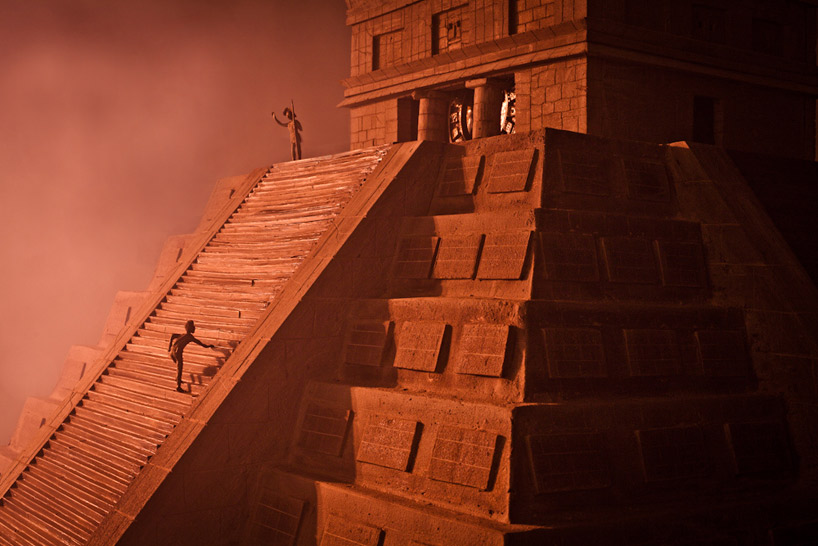 an additional view of the theatrically lit, towering chocolate artwork 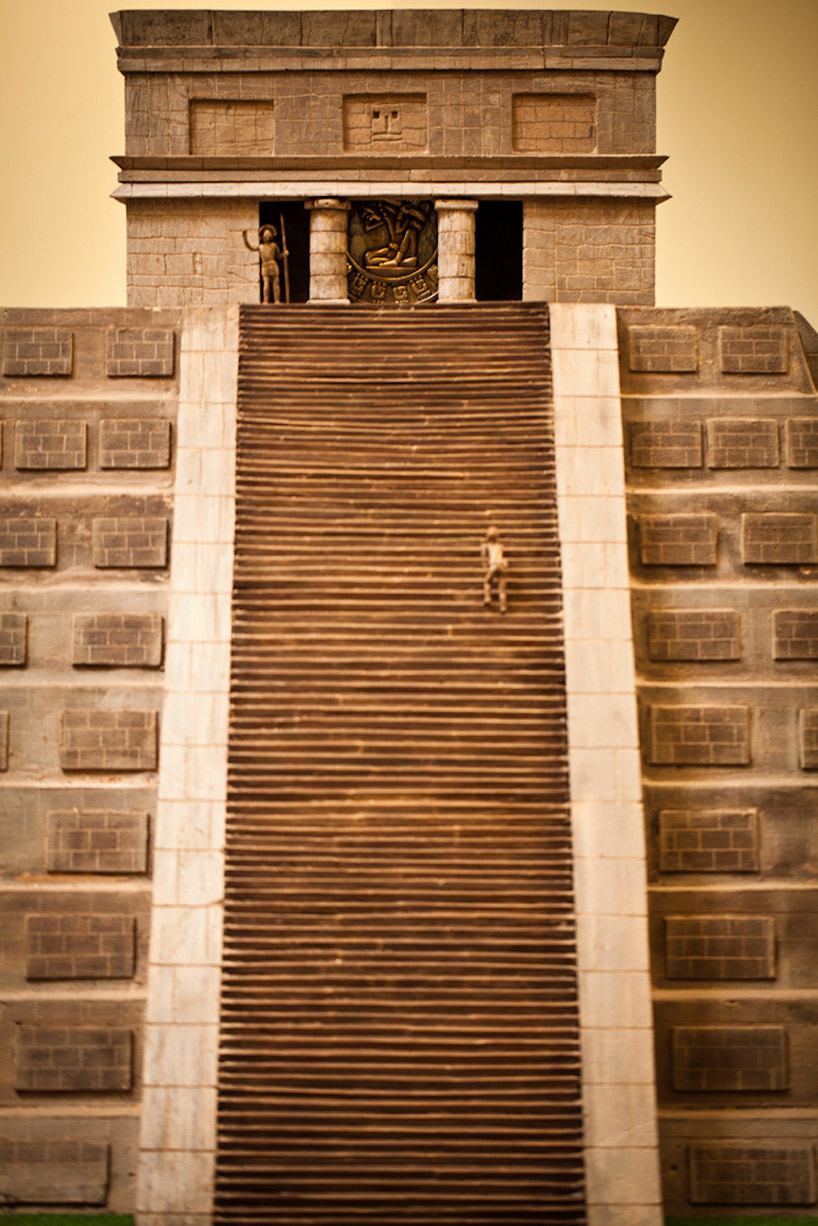 a chocolate figure climbing the stairs of the temple 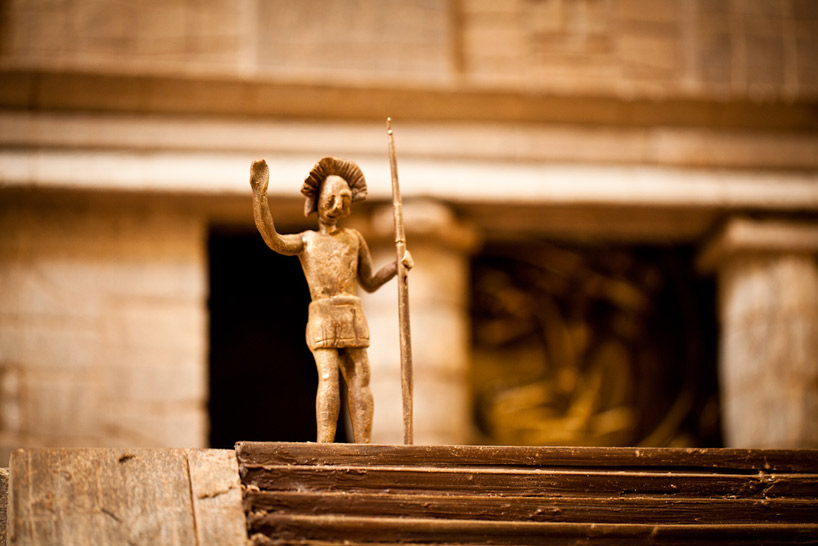 a detailed perspective of the edible figure

the specialty foods company says they ‘chose the mayan theme because of the crucial role the culture played in the origins of chocolate. the mayans were one of the first civilizations to cultivate cacao trees and discover the true potential of the cocoa bean. realizing the delicious possibilities of this powerful discovery, the mayans worshiped the cacao tree and praised its beans as the food of the gods‘. 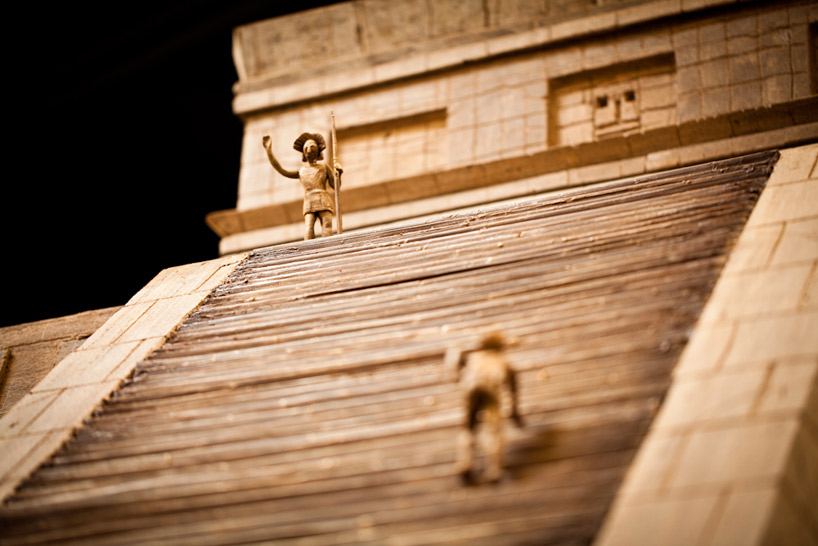 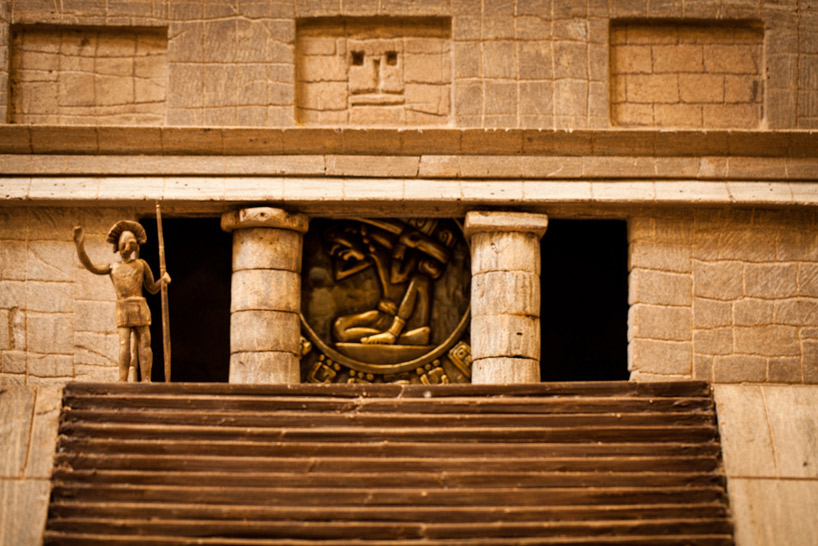 an additional vision of the miniature ancient mayan person 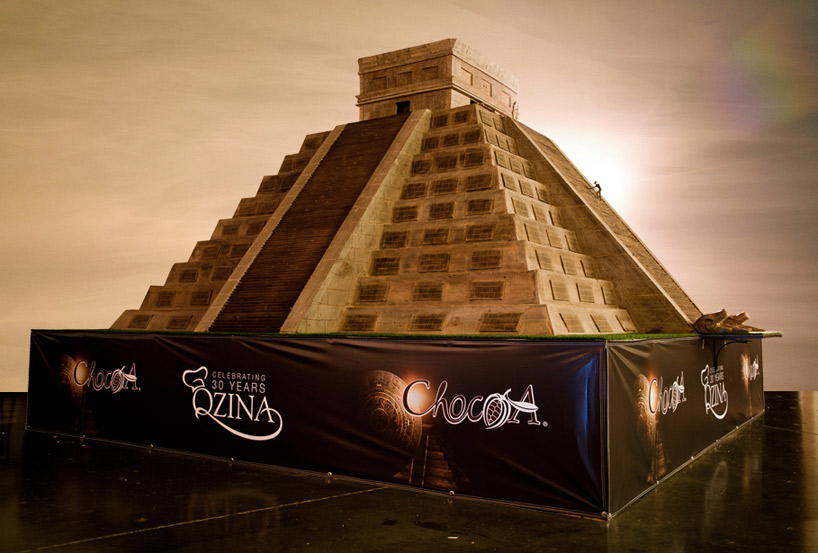 ‘breaking a guinness world record for building the largest chocolate sculpture will be qzina’s greatest masterpiece yet. we studied mayan pyramids at great lengths to create an exact replica of the temple kukulkan at chichen itza to honor the original chocolatiers. it was important for us to create something memorable in celebration of our 30th anniversary and the grand opening of the qzina institute of chocolate + pastry.‘ –richard foley, founder and CEO of qzina 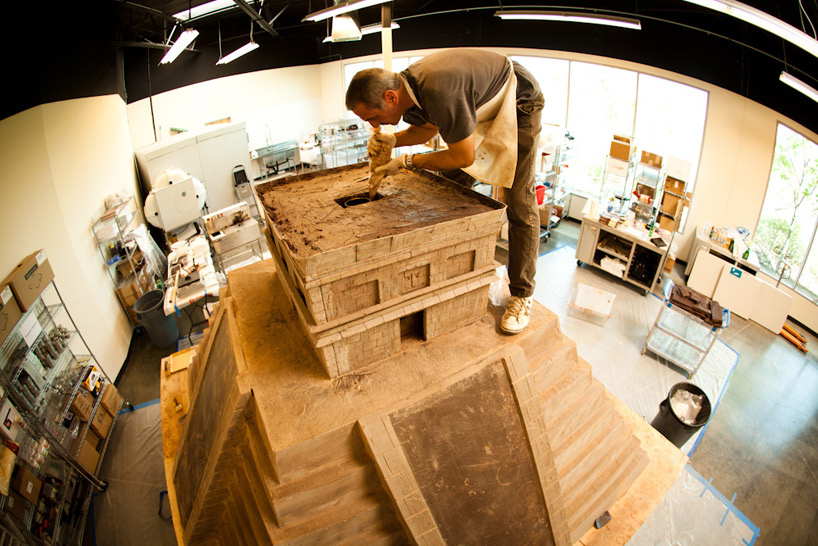 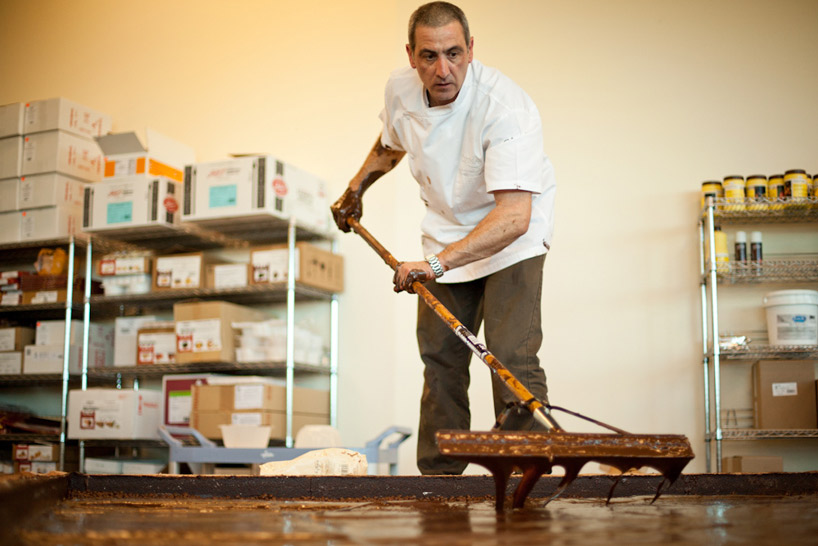 ‘mellet, together with his team, spent more than 400 hours constructing this magnificent structure of solid chocolate that was created using an assortment of qzina’s leading chocolate brands. extensive planning and research set the groundwork to accurately capture the details and intricacies of an authentic mayan temple down to the exact number of steps and panels representing numbers significant to the mayan calendar‘. -qzina company 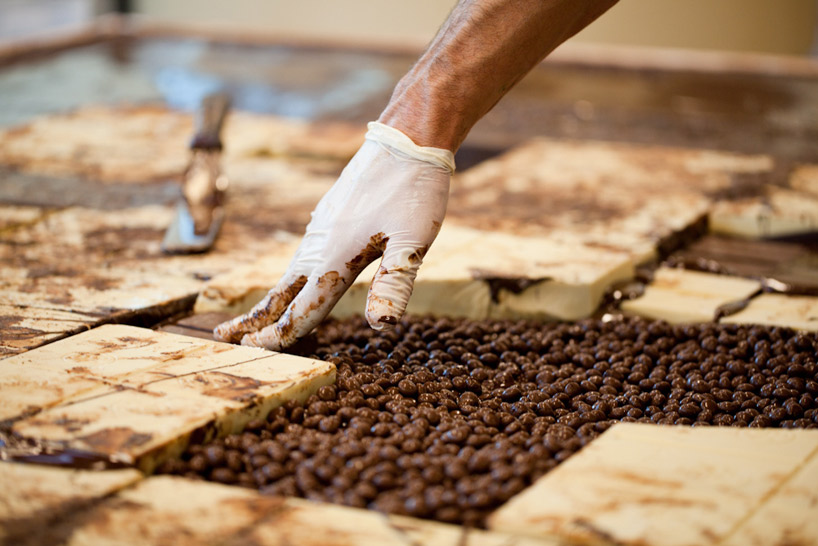 a detailed perspective of the work in progress 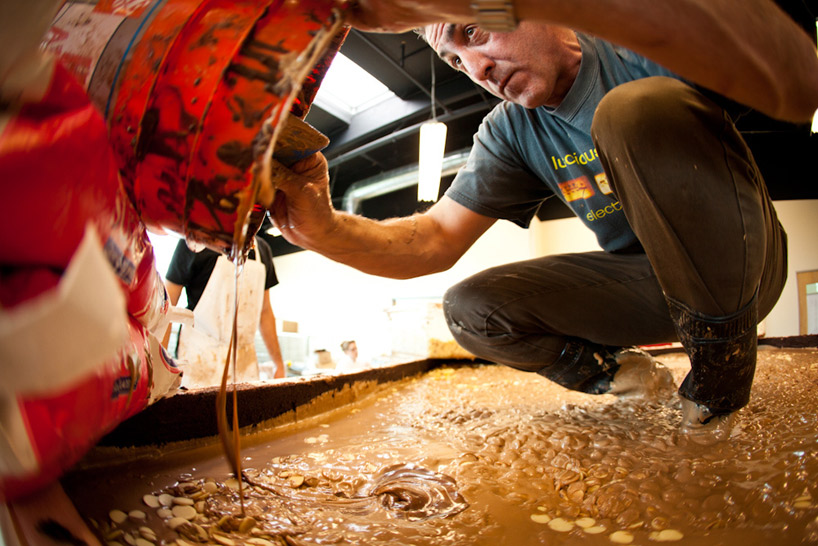 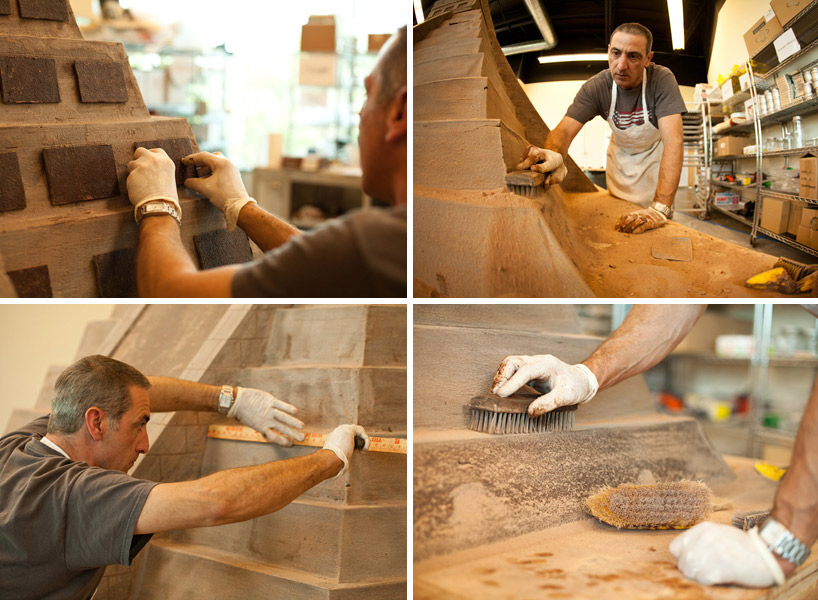 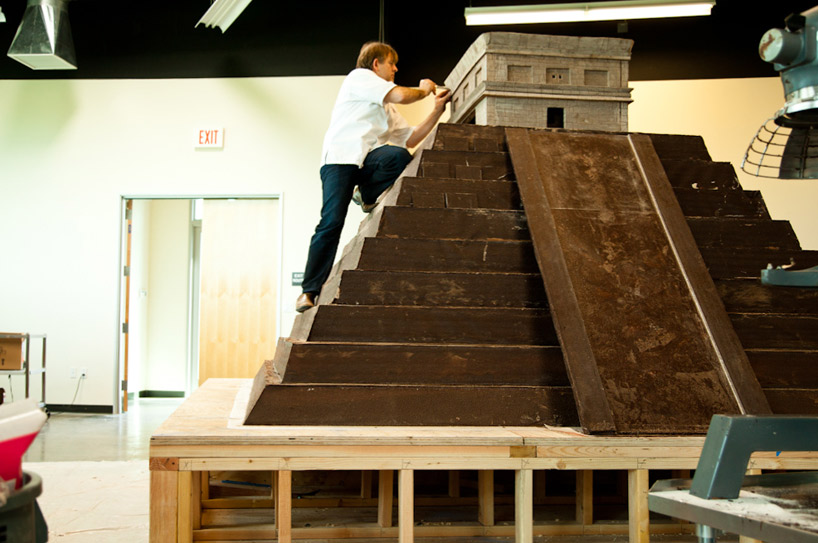 a wide view of the work in progress