dry-humored, direct, and permeated with historical, political and social references, venice-born and berlin-based artist monica bonvicini started exhibiting internationally in the mid-1990s. best known for her large-scale installations that include different materials and mediums, bonvicini investigates the relationship between architecture, power, gender, space, surveillance and control while questioning the meaning of making art, the ambiguity of language, and the limits and possibilities attached to the ideal of freedom.

following her solo show at milan’s galleria raffaella cortese and her As Walls Keep Shifting installation at OGR torino during artissima, designboom interviewed the artist who discussed her practice and what feeds it. 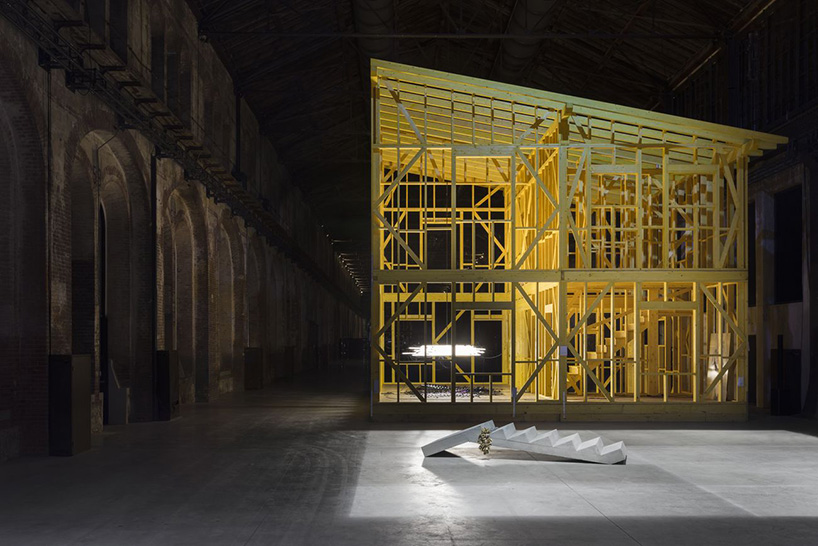 DESIGNBOOM (DB): with Unrequited Love at milan’s galleria raffaella cortese and As Walls Keep Shifting at OGR torino, it feels as if there’s a return to your homeland. is there anything that links these two projects?

MONICA BONVICINI (MB): this year I had several shows and projects in italy. in milan and turin for the two shows you are mentioning; in rome where I installed at the MAXXI museum’s piazza my public artwork Don’t Miss a Sec’ — making it the first time this work is shown in italy — and also in venice where I was invited by the director of the biennial  mr. baratta to make the  stage, costumes and concept for the turandot at the fenice theatre during the the venice art biennial. too sad the director of the opera house was not so keen on my feminist interpretation of the last puccini’s opera and canceled it just a few months before the opening

the two shows in milan and turin opened only a month apart so it has been fun for me to work on a variation of the documentary photography series Italian Homes. for one of the gallery’s spaces I had three pictures as wallpaper, covering up all the walls, from bottom to top. I was interested in bringing a suburbs’s architecture into the city center, and to play with a display related to fairs, like tourism fairs: instead of a sunset in some exotic beaches you get some exotic suburban houses… otherwise the two shows are totally independently from each other. at raffaella cortese gallery I had some works related to migration, art history and late capitalism, with a very large silkscreen of a marlboro ad, like the one I had in vienna for the I Cannot Hide my Anger show. and in the third space, the works concentrated on global warming, capitalocene, feminism and craft, with the piece Bent On Going: almost 100 neon tubes hold together with a thread of electrical cables in the fashion of a chain link, or a keffiyeh and black and white drawings of destroyed houses. 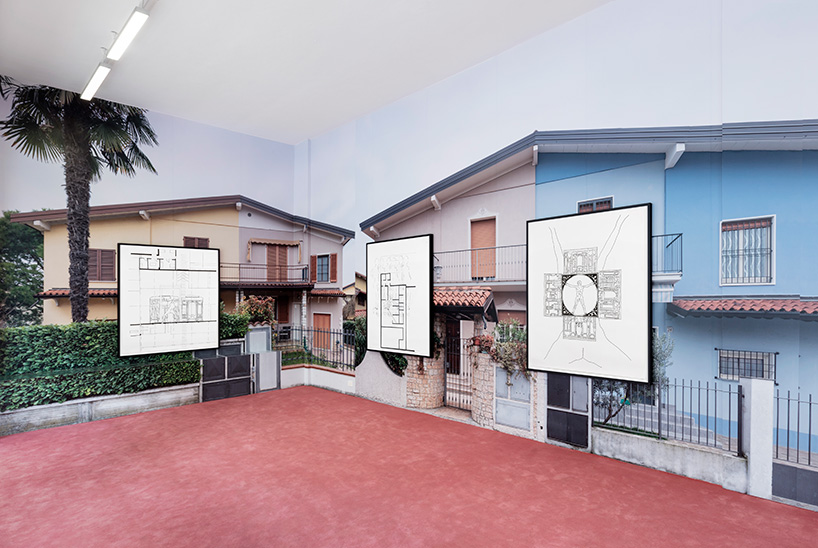 DB: you are italian but have been living away from your home country for quite a while. with Italian Homes #1 you’re documenting how italy has been affected by globalization. is there a romantic idea behind this project?

MB: the photographic series Italian Homes is documenting globalization, gentrification and how things change. architecture does not change so fast as you might think, most of it is still built to stay forever, but it does change and I am not only talking of the natural process of decay that doesn’t spare architecture as well. it is hard to say, from a façade, what is going on on the inside or what a bright blue color means, how it reflects the inhabitants or their political tendencies. but it does, for example, symbolize a sense for contemporary, compared to pale yellow. in the façades of the family-houses there is a lot to see, they are a display of history, local and not, of economical changes, of tastes. I have always found fascinating how much effort people put on the outside of their houses, their fences, something I was working already on when I was in LA with the work turning walls. italy certainly changed a lot since I left it, I can see very it clearly. also in the aesthetic of the urban structure. I personally think there is nothing romantic about a house, if you show a lot of them at once, even less. 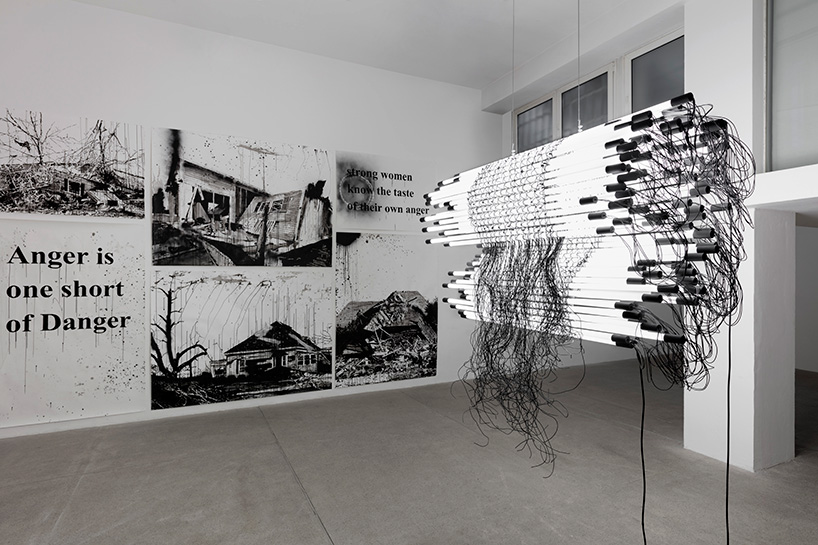 DB: your pieces, through the use of specific objects, question power, society and the male role in it. not sure if to call you a feminist, but to what extent has this ism influenced your work?

MB: the ism, particularly this ism, is just a little too short of a word to describe the movement, its revolution, history, development and gigantic potential for equality and a better world for everyone. so yes, feminism has always been something I have been aware of, and I always took care of involving, respecting and developing it within through my work. the feminists of the 70s initiated a lot of changes; they facilitated their younger generation. I always felt the responsibility to continue with their traditions, so that their fights would be not only honored but also carried on with. in terms of art, they didn’t just break through the glass ceiling talking about women’s work conditions in general, their right to a different economy etc., but they absolutely amplified what art was supposed to be. in an old video installation run, take one square or two from 2000, I talk about that: how feminist artists occupied the streets, invented new faculties and studies, did art outside of studios, brought sex and desire into art as nobody did before, they worked outside of galleries, outside of the markets, with texts, posters and actions, collaboratively.

I personally do not work much with everyday objects, and to consider an approach to art in that sense as feminist is a little old fashion. feminist art today does not have to happen in the kitchen… martha rosler made that very clear already then as well as mona houtum later on… 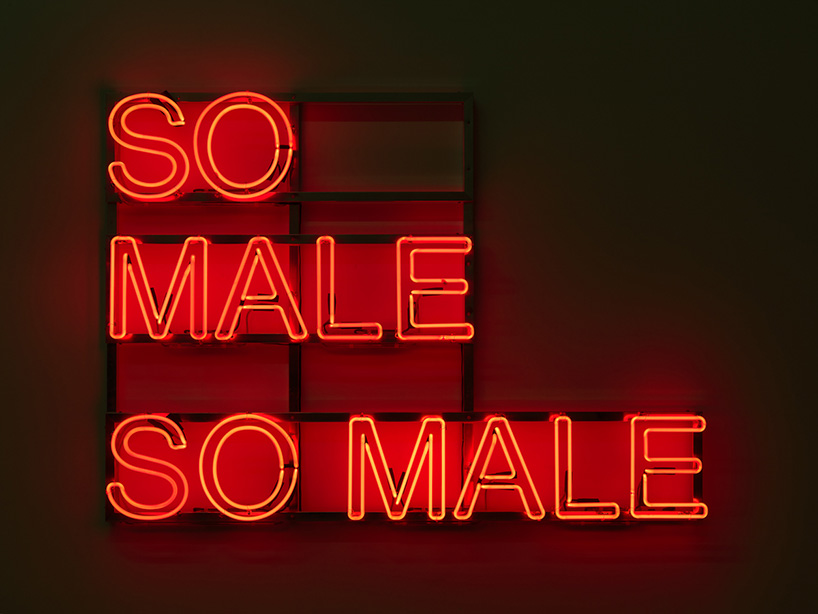 DB: the materials you decide to use are already charged with meaning, making the reading of your pieces quite straightforward. is this something you aim for?

MB: I dare you to find a material that is not loaded with meaning… for every artists the choice of material is like a vocabulary. questioning society, issues related to labour, to gender, to the politic of it is what I am interested as a cultural producer and I am surely not there to have everything shining in glossy glory… I have been working a lot with industrial materials, most of them being construction materials, like drywalls, bricks, aluminum, glass, mirrors and chains. the message is never just inherent in the material, it is what you do with that, what kind of connections and new forms you manage to introduce into a specific material that makes a certain reading possible. some of my works might be quite direct in the way they approach the audience. it is always about confrontation. 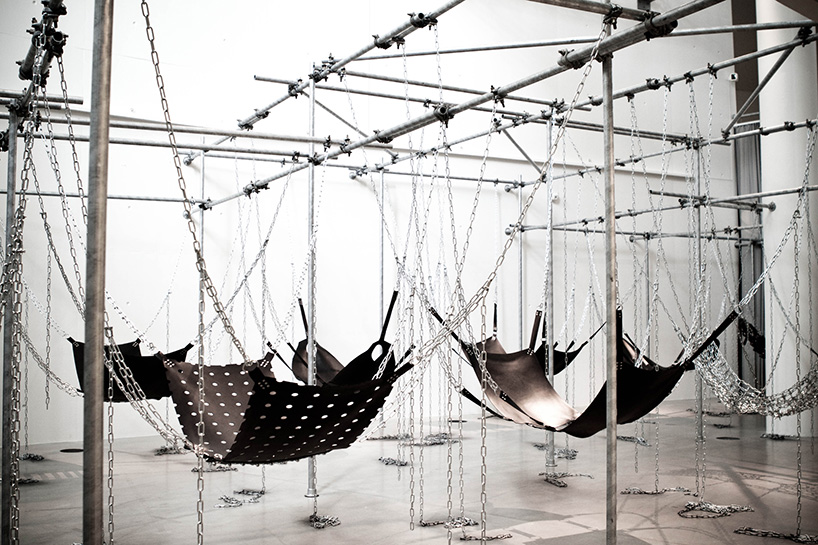 DB: can you tell me a bit more about your relationship with the german capital and how has it informed your work?

MC: well, I lived in berlin longer than I lived anywhere else and so sometimes I love it and I very often hate it. I do love that it is a city still totally changing. like a teenager… unorganized, angry, ruleless, always improvising. those are all great qualities but such an attitude can get on your nerves. lately I get a little annoyed of all those people who come to berlin thinking they are living in the 90s. not the same, definitely not the same… 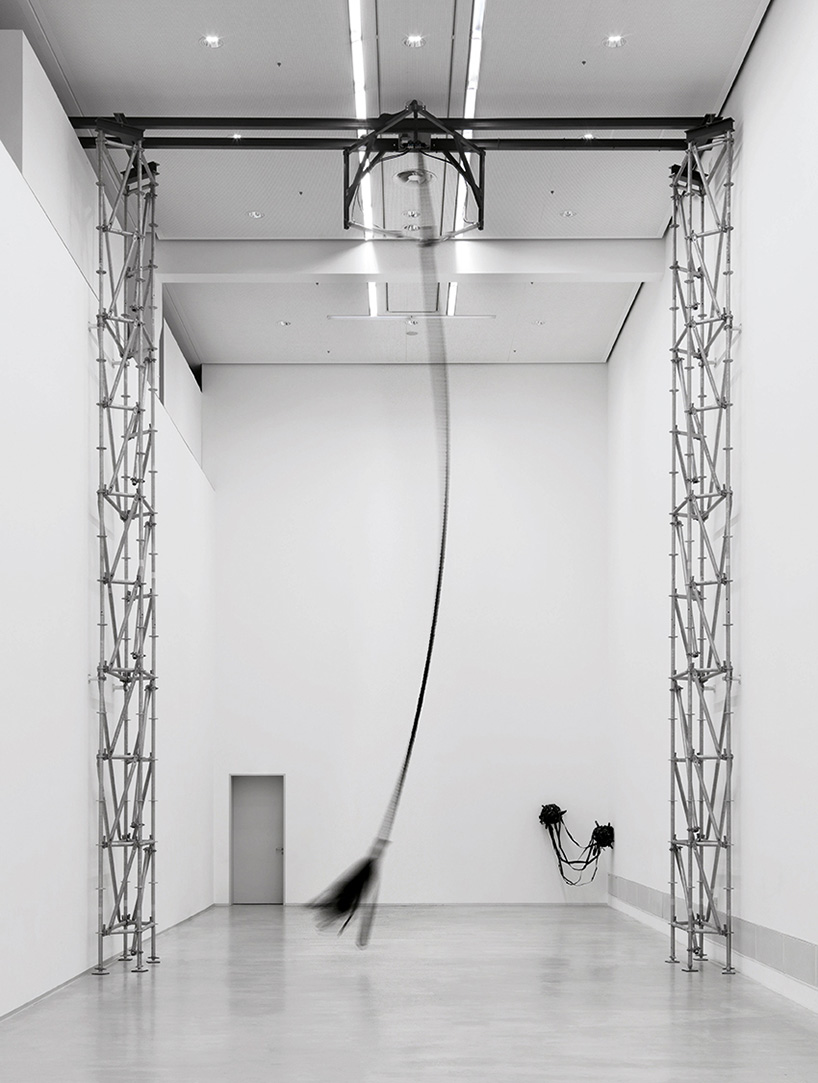 DB: can you guide us through As Walls Keep Shifting?

MB: As Walls Keep Shifting is an installation I have been working since a long time. I started taking pictures of typical 2-families houses in norther italy a long time ago. their façade, design and forms has been changing dramatically in the last 20 years, with the change of generation, politic, economic grow… the title comes from a book that came out 20 years ago called house of leaves by m-z. danielewski which I read at the time. it is a complex book that puts together a lot of styles and stories. but essentially it is about a family that buys a house in the countryside and wants to fix. all is good until they discover that the house is bigger from the inside than from the outside. something that is logically impossible and can only bring madness… I think it is a great image to describe how to relate to a house or to the notion of a family, identities etc…


I built half of one of those 2-family houses, I have the pictures in the show. it is a 1:1 construction. out of wood, a simple construction, a skeleton on which electricity, heating, water has to be add to as well as drywalls and all the rest that is considered interior design or ikea… on the outside of the structure there are papers with quotations from another book: the collected stories of diane williams by diane williams. she is a master of short stories, much of them quite disconnected from a literal logic, quite dark but humorous. like a lot of other writers, she writes from home so the domestic sphere is part of her writings, but also because all human memories are attached in a way or the other to a piece of a wall, of a door, window views… the installation is embedded in a sound-piece I edited on site. it is the song by nash our house, a song I thought about while working on the show. I always found the song embarrassing, it is so simple, and it describes the horror of bourgeois living, pretty much like the houses I portrayed in the photographs. but it’s also a very likeable song… 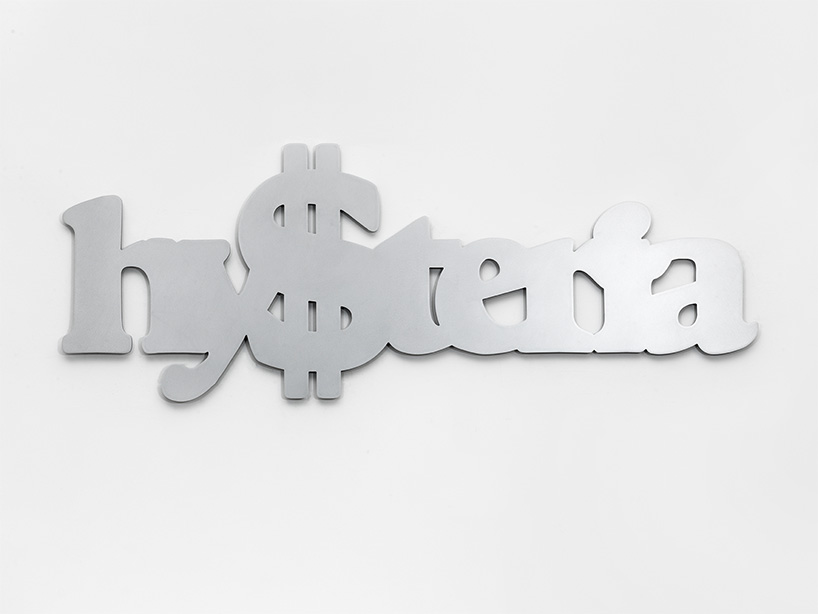 DB: where does your obsession with architecture come from?

MB: I never thought of it as an obsession… I just find architecture very interesting. as a young students I also contemplated for a while to study it..  I see often architecture as a form of sculpture, without the art-history I connect to sculpture… I also never find architecture as something that is just there and you use it. I am always questioning it. after all, isn’t architecture the mother of all arts? 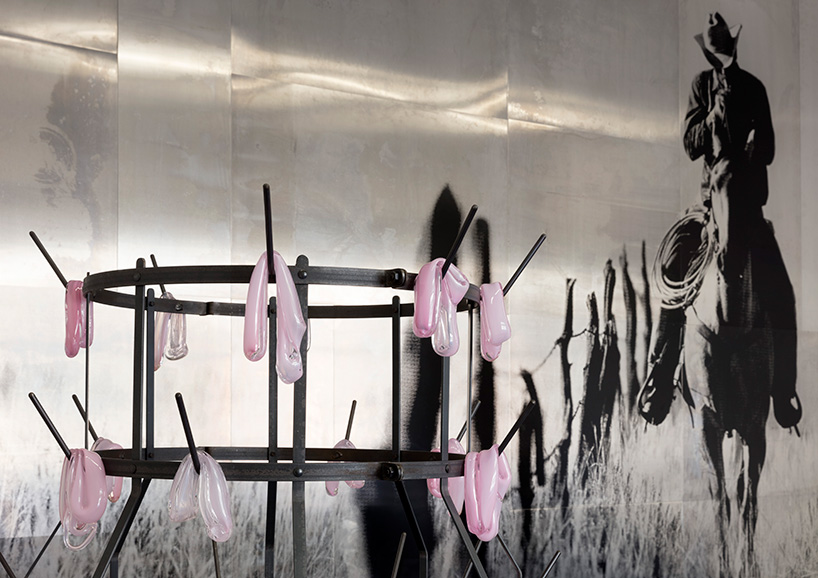 DB: what about humour? I think it’s present in your work and I’m really thankful for it.

MB: yes, works without humor are so boring and pretentious. smart works always deal in a way or the other with humor because otherwise you can go and kill yourself. DB: what are you working on next?

MB: this year I have some projects in public space to finalize, a book, and maybe I will do the turandot! 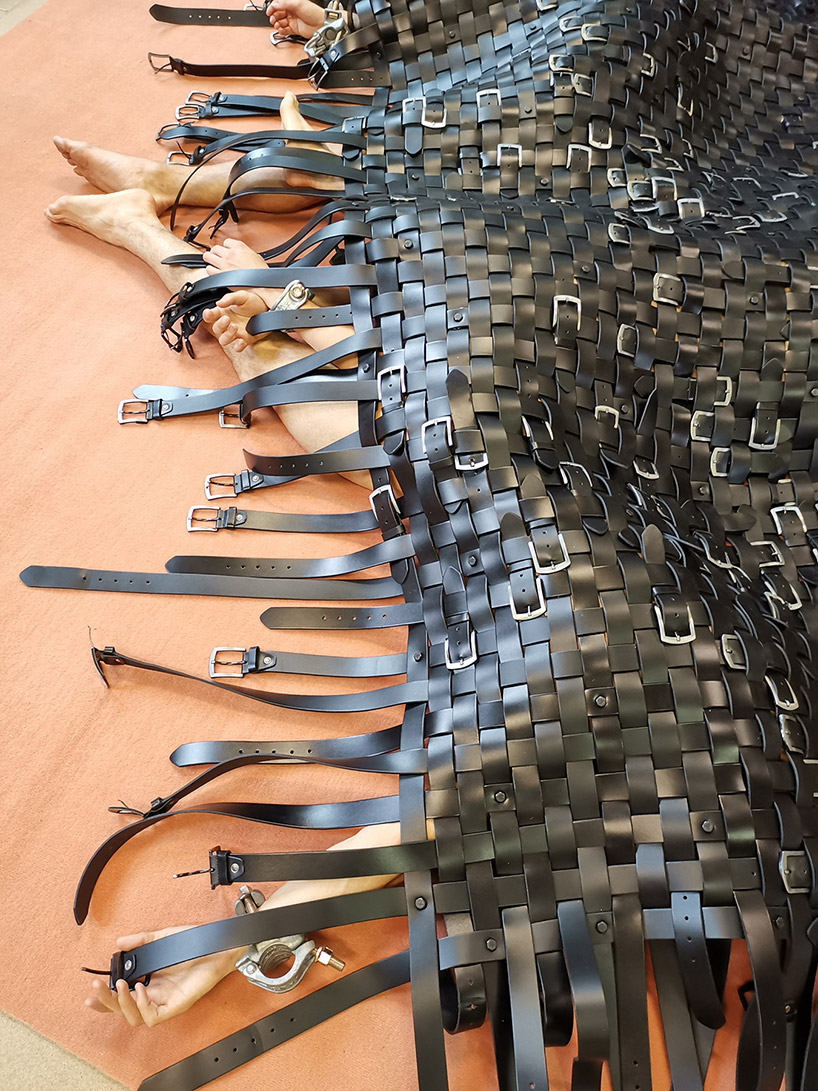 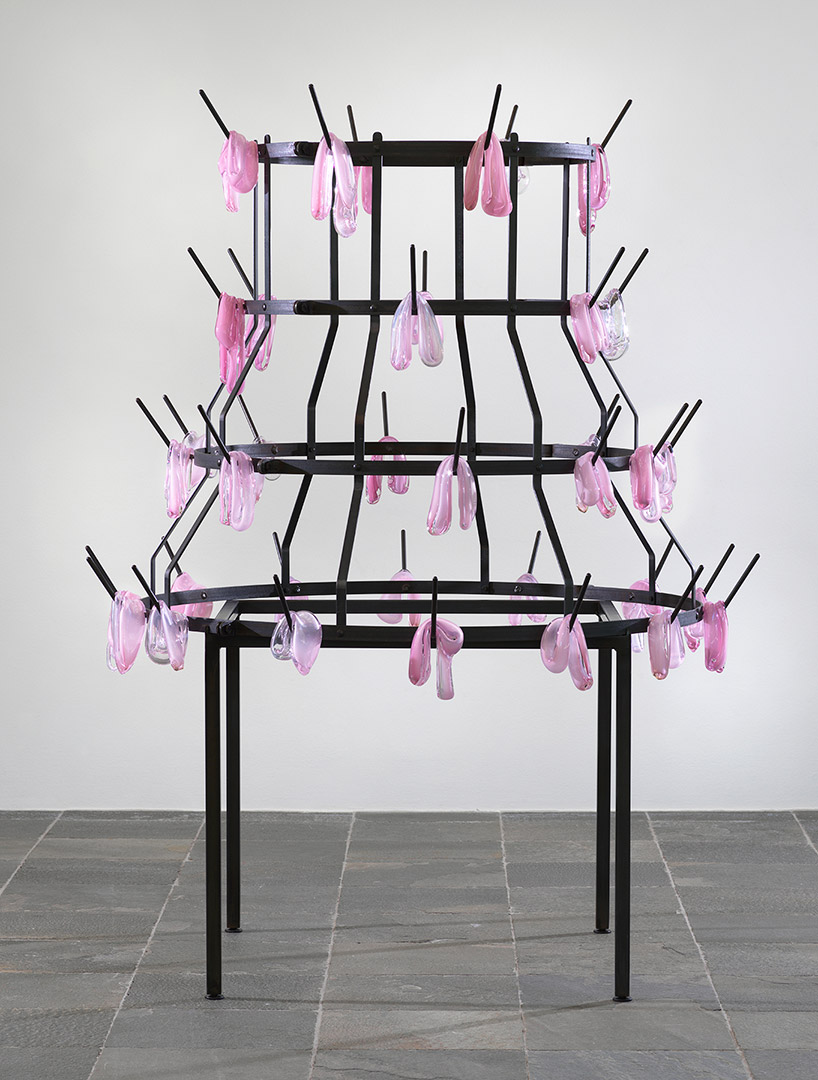 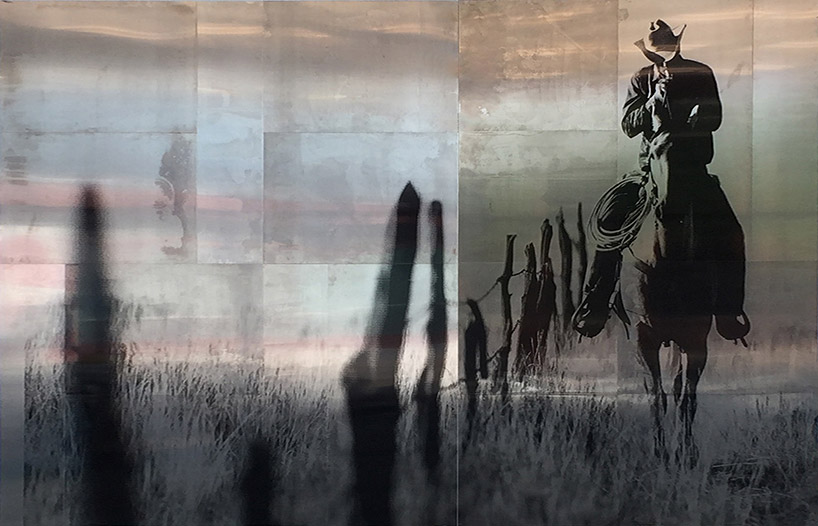 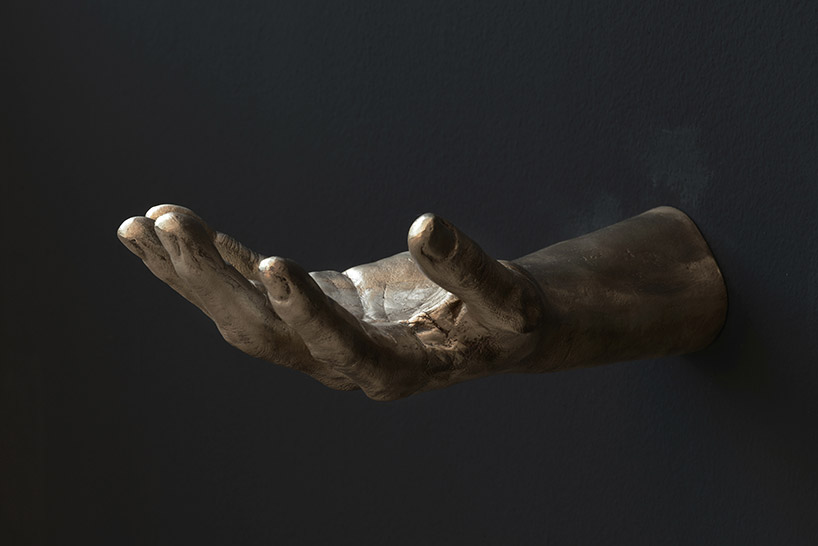 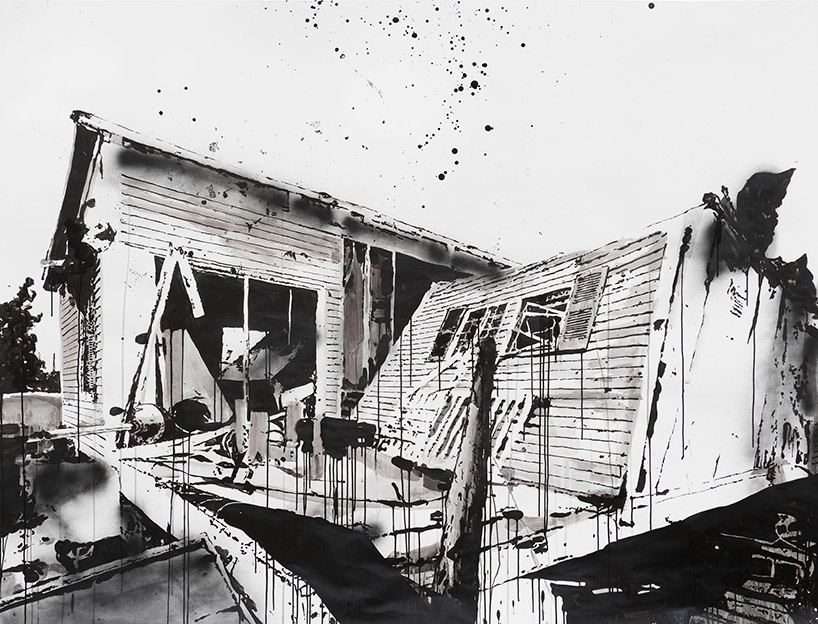 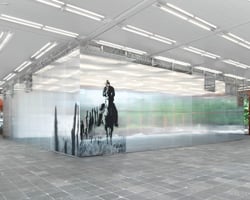 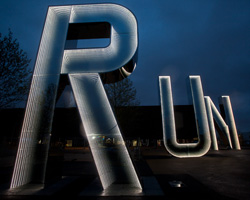