montblanc‘s patron of art edition 2016 pays tribute to the outstanding legacy of one of the most influential art collectors and exhibitors of 20th century art, peggy guggenheim, who dedicated most of her life to protecting the art of her time by discovering and nurturing new talent; while building an important collection of works housed today in a venice museum that still carries her name.

as part of its ongoing commitment to actively engage in the promotion of arts and culture worldwide, german luxury brand montblanc has recognized for over 25 years the invaluable contribution of modern day patrons of the arts in 16 countries. the prestigious cultural prize has been awarded since 1992 in 16 countries, honouring today’s patrons who continue to allow the arts to flourish by selflessly committing financial resources, time and energy to cultural projects. over the years, nearly 4 million euros have been granted, and 230 initiatives have been supported through the montblanc de la culture arts patronage award. 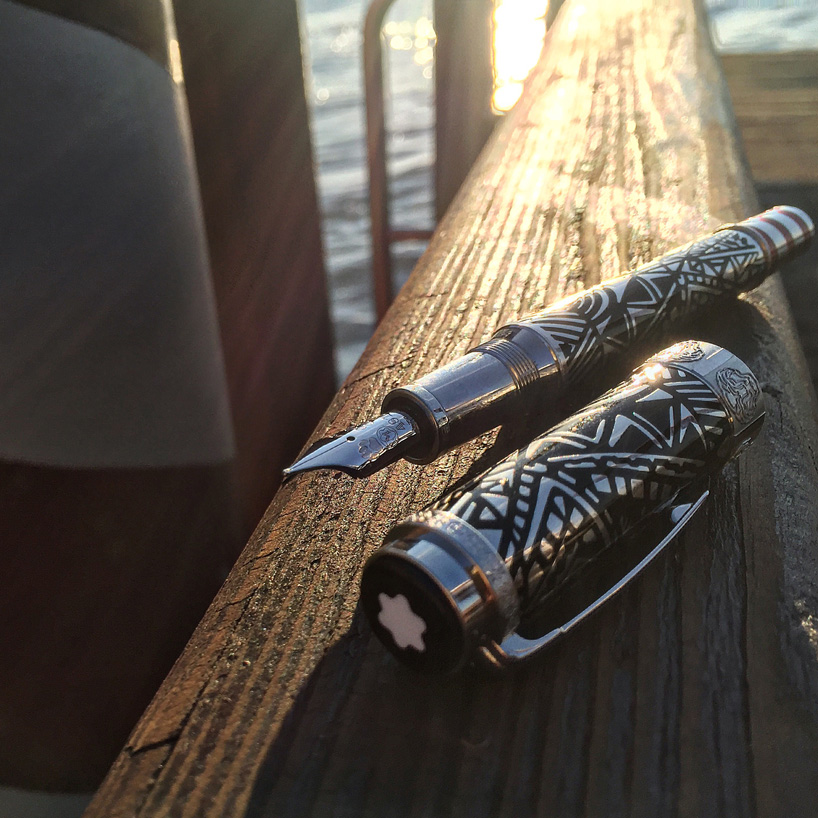 ‘the art of patronage award is a visionary prize and when the program was created, it surprised many with its unusual focus on those working behind-the-scenes and contributing their resources to the arts,’ explains till fellrath of the montblanc cultural foundation. each year an independent jury of eminent personalities selects and awards these global supporters of culture of our times. past winners having included HRH the prince of wales, queen sofia of spain, architect renzo piano and yoko ono. 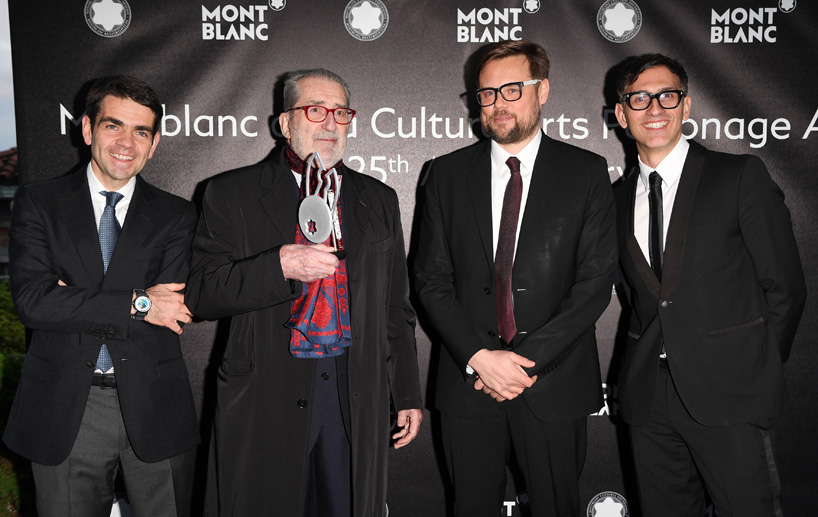 from left: montblanc CEO, jérôme lambert with gallerist giorgio marconi and the new co-chairs of the montblanc foundation, till fellrath and sam bardaouil at the 2016 montblanc de la culture arts patronage awards in venice

designboom was invited to the 2016 montblanc de la culture arts patronage awards in venice when montblanc honored the founder of the historic studio marconi in milan. gió marconi established the marconi foundation for contemporary and modern art in 2004, a non-profit institution for the promotion and diffusion of contemporary art and culture through exhibitions, publications, cultural events and meetings. marconi received a patron of art peggy guggenheim limited edition fountain pen encased in a trophy, and 15,000 euros ($17,160) to be donated to a cultural project of his choice. 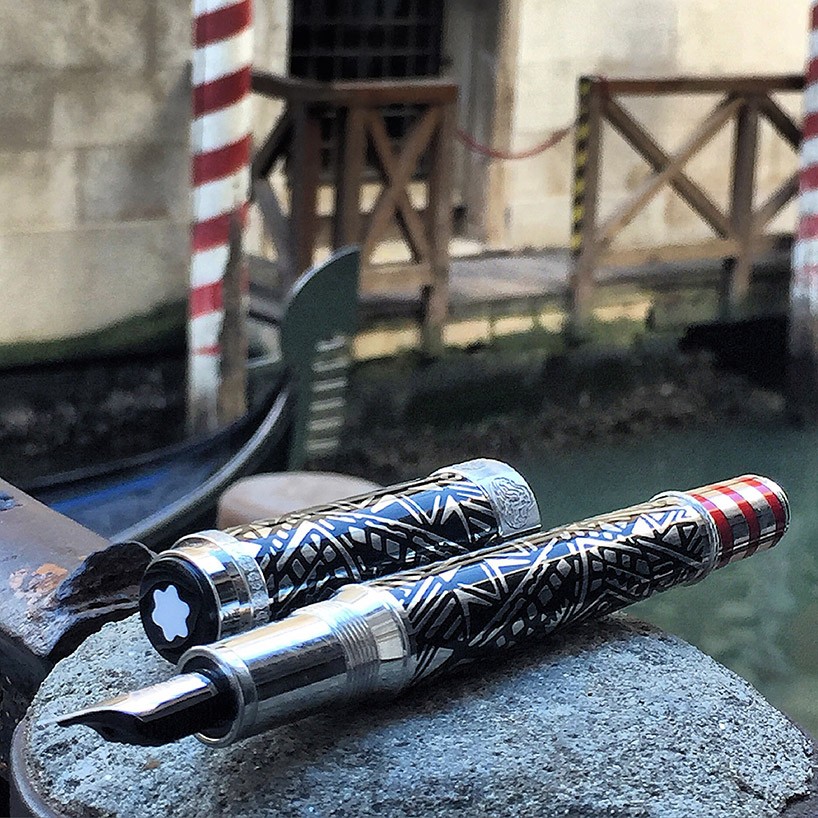 every year, to coincide with the award, a unique limited edition writing instrument inspired by a historical patron of the arts is commissioned to honour the contemporary ones. the montblanc patron of art 2016 peggy guggenheim fountain pen limited edition 4810 features the geometric art deco design on a black lacquered and platinum-coated cap and barrel, contrasting with the red and platinum-coated stripes on the cone of the writing instrument. the platinum-coated ring is elegantly embossed with the lion heads associated with peggy guggenheim’s venice. 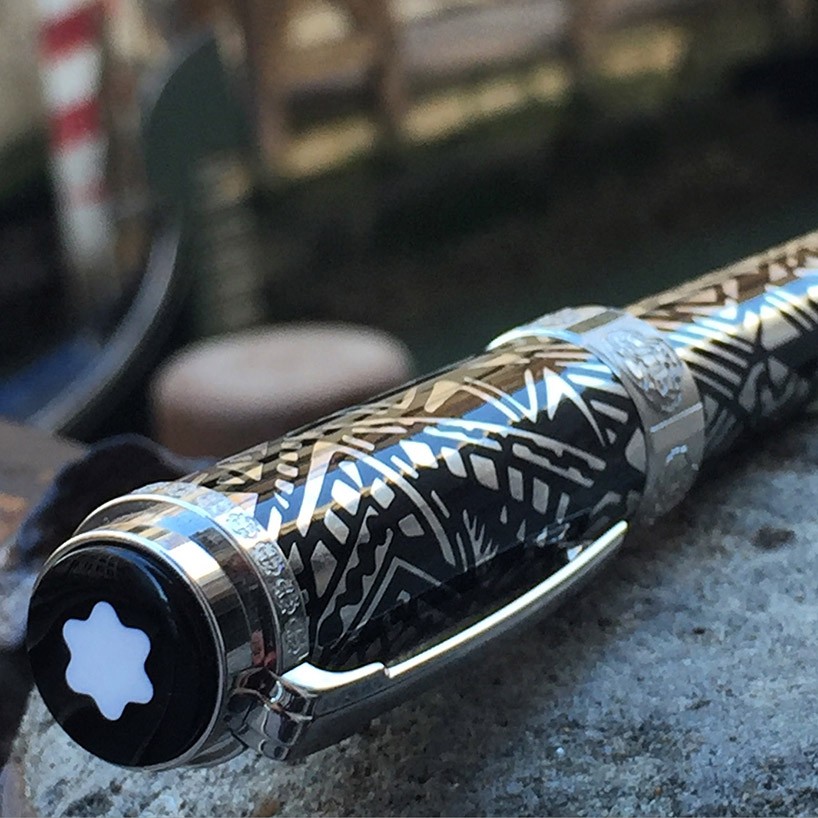 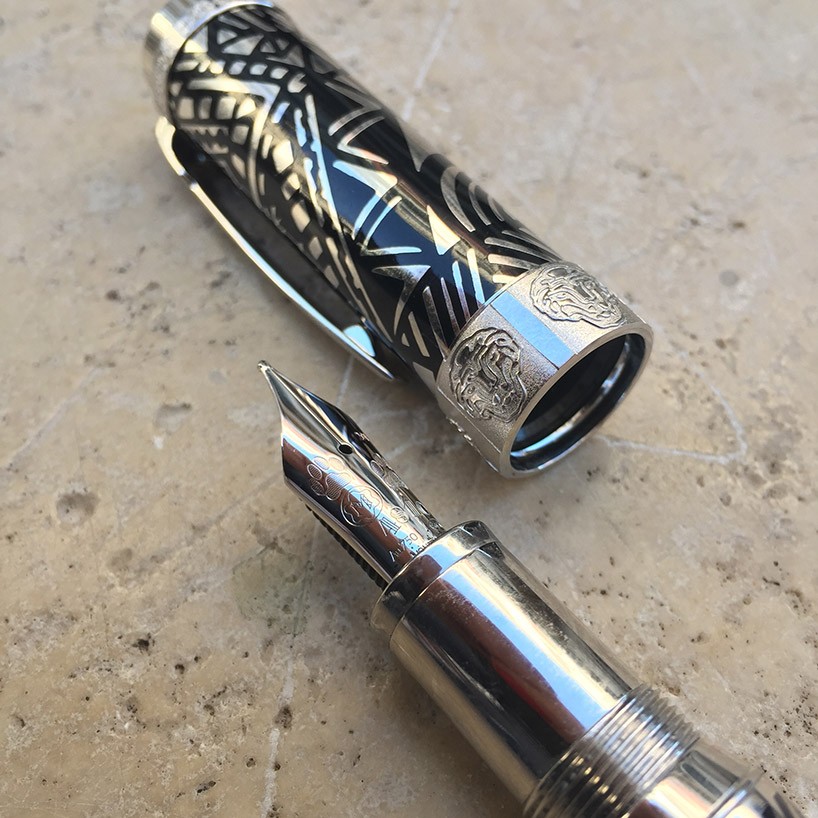 the platinum-coated ring is elegantly embossed with lion heads, referring to the lion of saint mark, symbol of venice
image © designboom 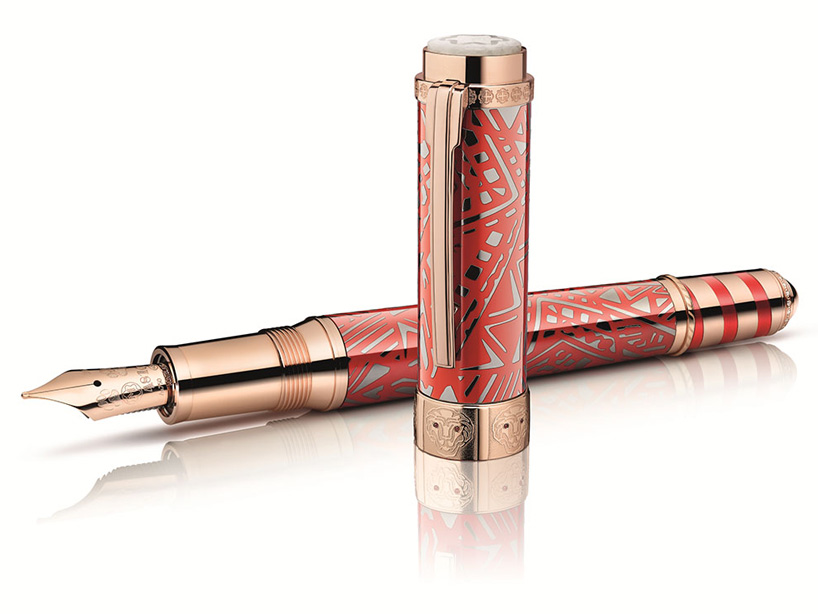 the engravings of lion heads on the red gold cap ring are inspired by the exterior of the ‘palazzo venier dei leoni’, peggy’s home for 30 years richly decorated with this symbol of venice. the cap ring has been embellished with a set of 10 garnets in the eyes of the lions, while the cone, designed like the red and white striped mooring pillars found on the venice waterways in red gold and translucent red lacquer, features a brilliant cut diamond ring at its end. the montblanc emblem in white marble crowns the art-inspired writing instrument. the paws engraved on the au750 solid gold nib recall the special affection she had for her 14 lhasa apso dogs. peggy guggenheim’s ‘beloved babies’ not only accompanied her on her gondola trips down the grand canal, but were laid to rest next to their eccentric owner in the grounds of her palazzo. 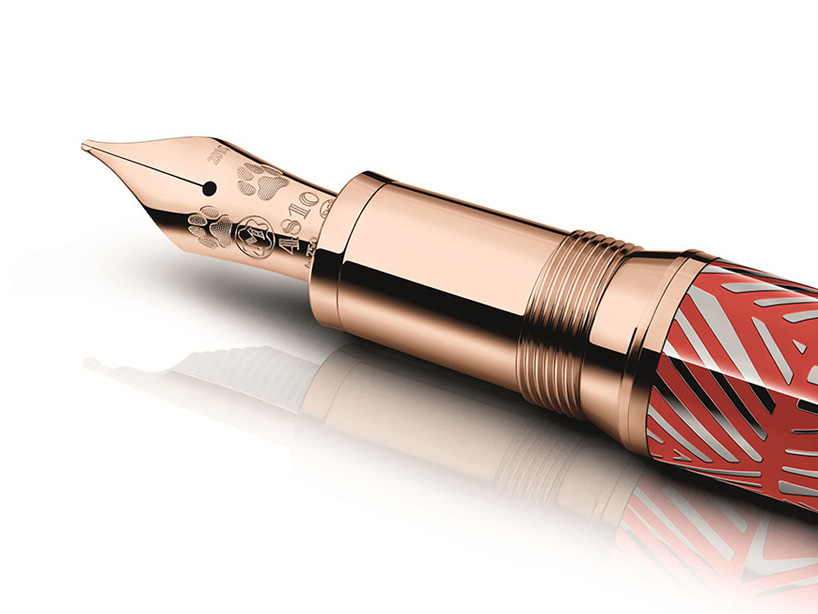 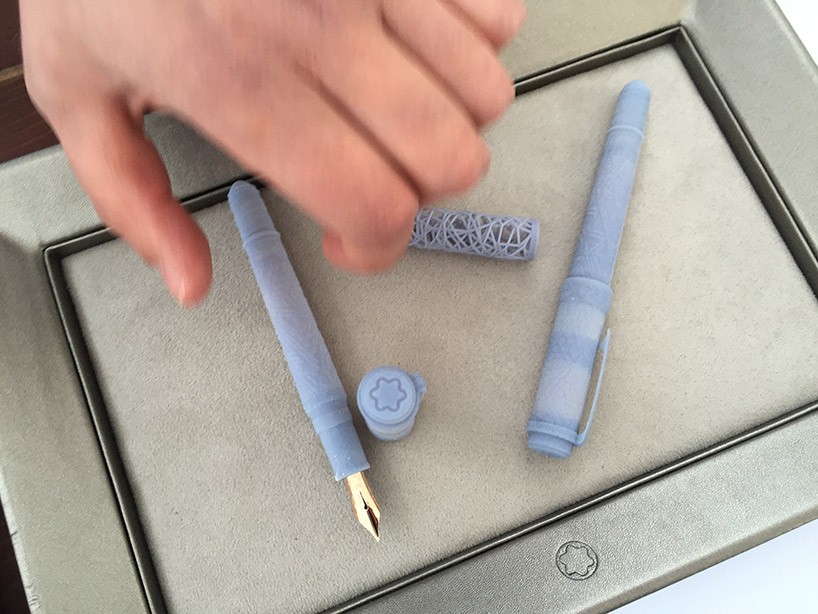 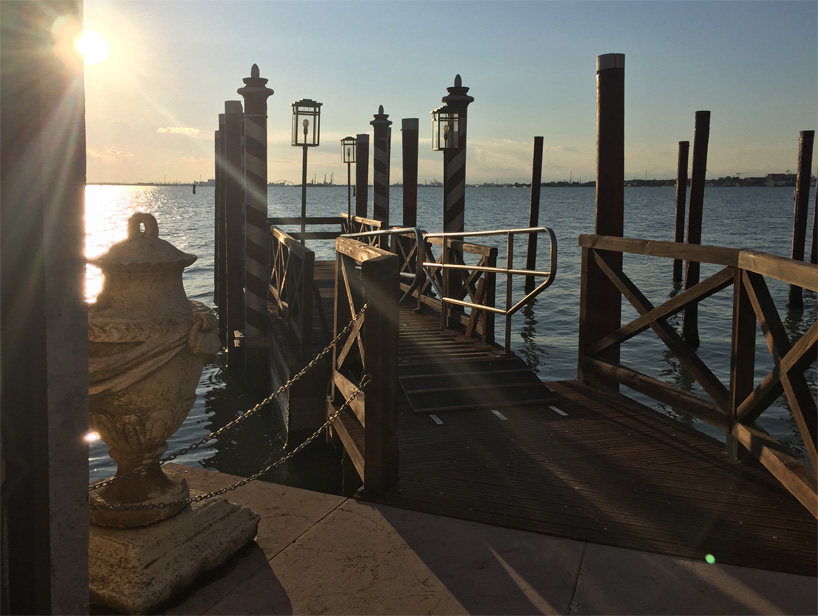 a cocktail party was held on the roof of the peggy guggenheim collection at the 18th century palazzo venier dei leoni on the grand canal, once inhabited by the great patron of art peggy guggenheim and now home to her significant collection of modern art. overlooking the canals, guests had the chance to enjoy a calligraphy live performance by french Star-calligrapher nicolas ouchenir. following the cocktail, an intimate seated dinner was hosted at the mid-fifteenth century palazzo polignac, a masterpiece of renaissance architecture with its remarkable stone and marble facade. inside the candlelit rooms of the historic palace, montblanc had brought together each of the 25 patron of art edition writing instruments that had been created every year since 1992 to honour historic patrons of art. 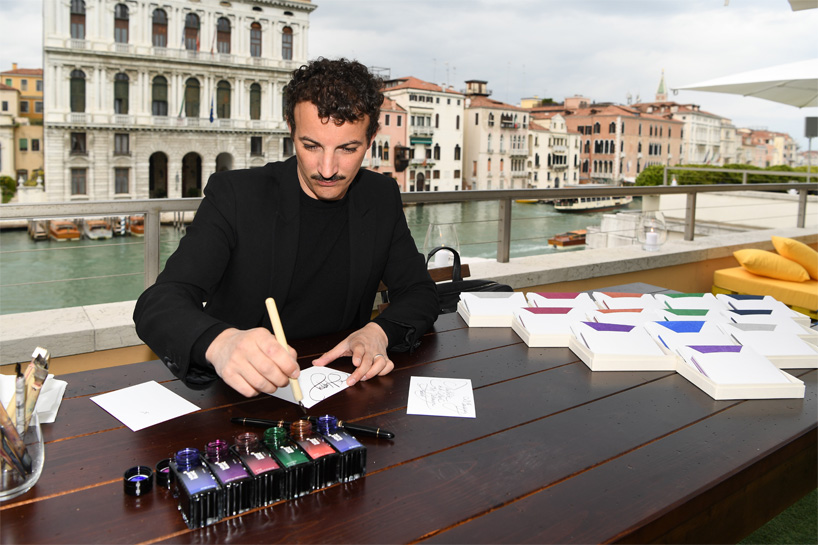 the french calligrapher nicolas ouchenir demonstrated the art of writing 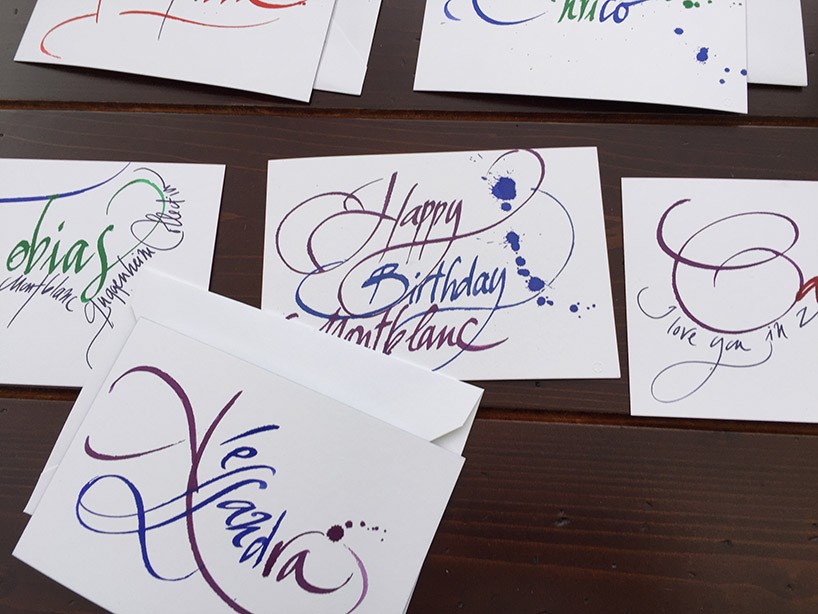 happy birthday!
the recently launched montblanc campaign celebrates the maison’s history of being the forerunners of innovation over the past 110 years — that its name has become one that hardly needs an introduction. artisanal dedication and fine craftsmanship reveal themselves through luxurious writing instruments, leather goods, timepieces, fragrances and eyewear, since montblanc’s debut in 1906.

hugh jackman presents the montblanc story: pioneering since 1906. for the pioneer in you.

the ‘making of’ the montblanc story

see images of the montblanc venice event and more information about the other winners in the gallery below:

limited to just 81 pieces as a reference to the age at which she passed away, the montblanc patron of art peggy guggenheim limited edition 81 is a personal homage to her life from her arrival in europe to her later life in venice. created in the montblanc artisan atelier from the finest materials and shaped by highly skilled master craftsmen, the design of the writing instrument echoes the art deco style that surrounded the collector as she arrived in paris in the 1920s, with clean lines forming the straight shape of the cap, clip and barrel. the skeletonized au750 solid champagne gold structure of the barrel mirrors the dramatic entrance gates to the guggenheim collection in venice, created by the prolific modernist sculptor claire falkenstein.

the other winners of the 2016 montblanc de la culture arts patronage awards are:
claudia hakim (colombia) receives the award for her role in supporting the development of visual arts in colombia and latin america. she is the director and founder of NC-arte, a cultural and educational space that is part of the neme foundation; maria arena bell (USA) for her philanthropy and patronage of the arts in los angeles; sir john CBE and lady sorrell (UK) for the contributions of the sorrell foundation; henry levy (switzerland) for the creation of BINZ39; andrea von goetz und schwanenfließ (germany) for her on-going patronage of artists. the collector and curator is also the owner of the VG&S art development in hamburg; elena ochoa foster (spain) for her extensive patronage of the arts and the creation of ivorypress publishing house; leonid mikhelson (russia) for his patronage of russian art and the creation of the V-A-C foundation; designboom's dear friend soumaya slim (mexico) for her vast initiatives for social responsibility and philanthropy, and especially her role in leading cultural activities - from 1996 to 2006 she was the director of museo soumaya; johnnie to (hong kong) is best known internationally for directing and producing action and crime movies, but he has also devoted much effort to promoting the development of the hong kong film industry and nurturing new talent; sang-duck yoo (korea) for his commitment to promoting contemporary art to the korean public through the songeun art and cultural foundation; the B&M theocharakis foundation for the fine arts & music (greece) for its commitment to promoting music and fine arts in greece; louis roederer foundation (france); and ryuichi sakamoto (japan) for his numerous projects supporting young artists in the field of music and performing arts. xu zhen (china) is being honoured for his outstanding contribution to the contemporary art scene in china as an artist, art promoter and curator based in shanghai. he has won many awards internationally and was the youngest chinese artist to participate in the venice art biennale in both 2001 and 2005; and laís bodanzky & luiz bolognesi (brazil), both award-winning screenwriters and filmmakers, are being recognized for creating cine mambembe.

view of the exclusive montblanc dinner in venice

view from the terrace of the peggy guggenheim museum in venice

view from the terrace of the peggy guggenheim museum in venice 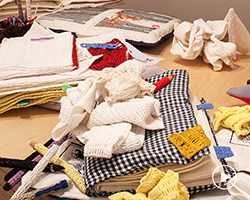 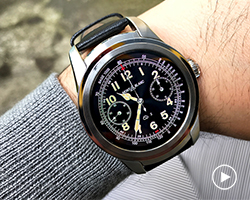 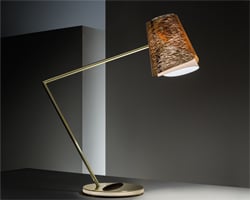 Apr 28, 2021
healed ghosts of history: jannick deslauriers on expressing ephemerality through fragile fabric forms
in an interview with designboom, deslauriers shares how her use of transparent fabric highlights the fleeting fragility of our surroundings.
art
225 shares
connections: +1320