as part of the festival of the fallas of valencia, a team formed by spanish studios nituniyo and memosesmas has designed a sculpture that acts as a blank canvas on which different artists express their ideas — a ‘falla’ with an indefinite shape that seeks to respond to a changing reality. on the last day of the festival, the monument was burnt along with hundreds of other monuments in the city, consecrating the ephemeral nature of the work. 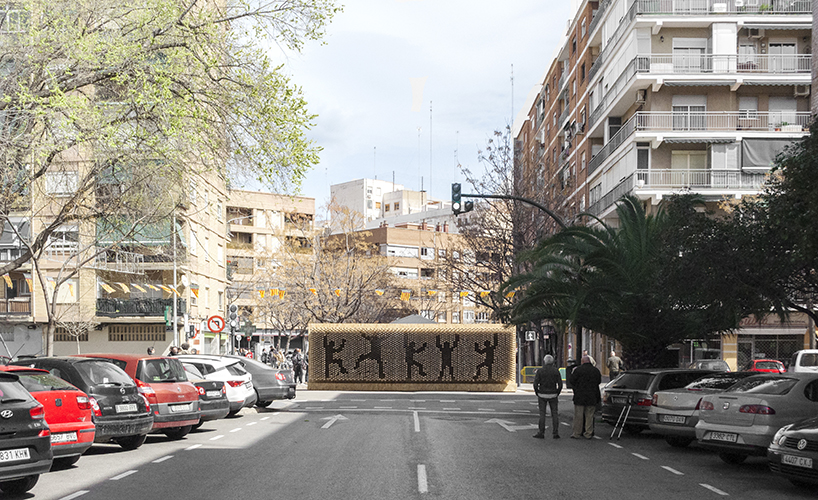 the intervention of luis demano is a reflection of immigration and borders, representing the migrants climbing

‘the theme of the fallas is usually determined by the events that occurred during the past year,’ explains the nituniyo and memosesmas team. ‘currently, events seem to happen at a pace that makes it very difficult for us to assimilate and reflect on what is happening. how can a falla reflect this fact? the impossibility of being a reflection of the vertiginous and changing actuality? would it have to renounce the falla to have form? could it have a mutable form? we propose a falla that is able to adopt different forms, a kind of blank three-dimensional canvas that can be modified daily and be the support of the message that is desired in each moment.’ 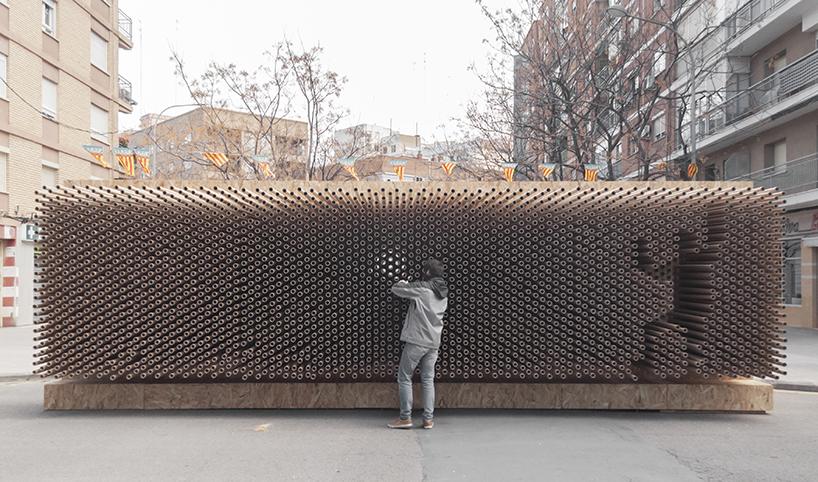 opposite side of the assembly, pushing the elements of the canvas, the silhouettes of the intervention are elaborated

the sculpture is a giant rectangle with multiple moving tubes, which allow the artists and the visitors of the festival to create their own art pieces. the team has invited three artists to shape the work during the days of the event: architect miguel arraiz, designer carlos tíscar, and illustrator luis demano. 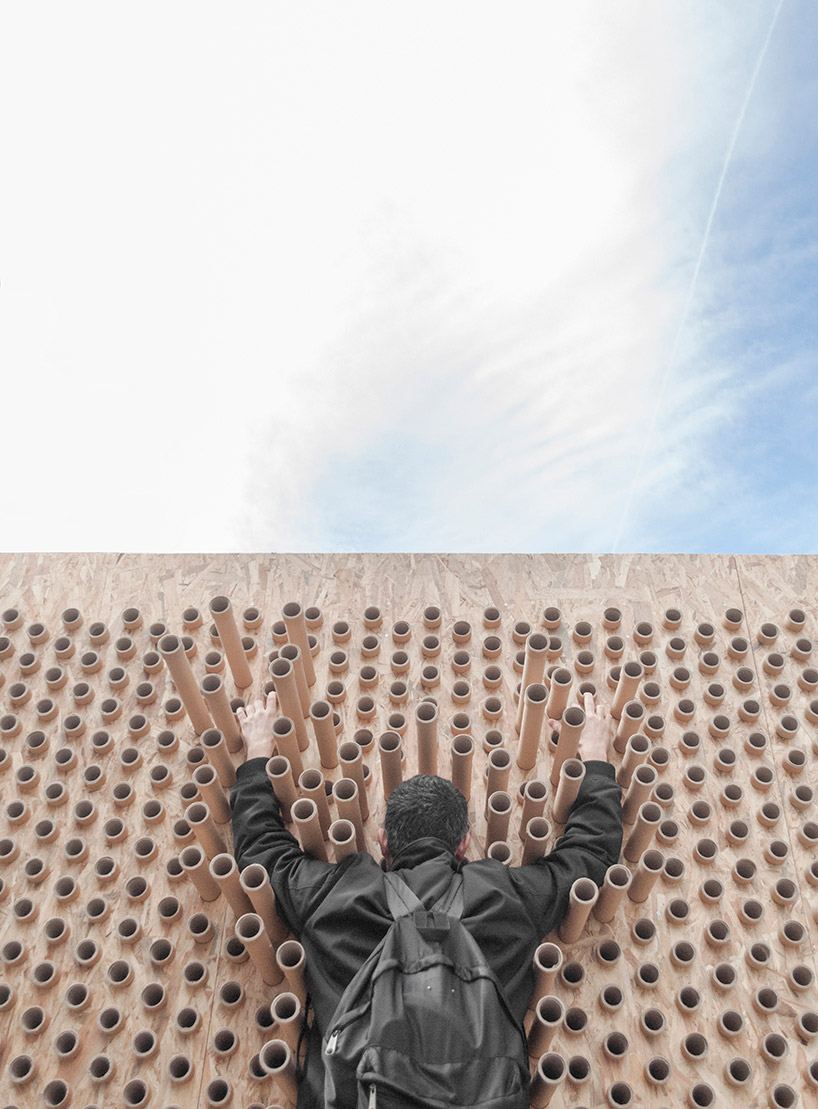 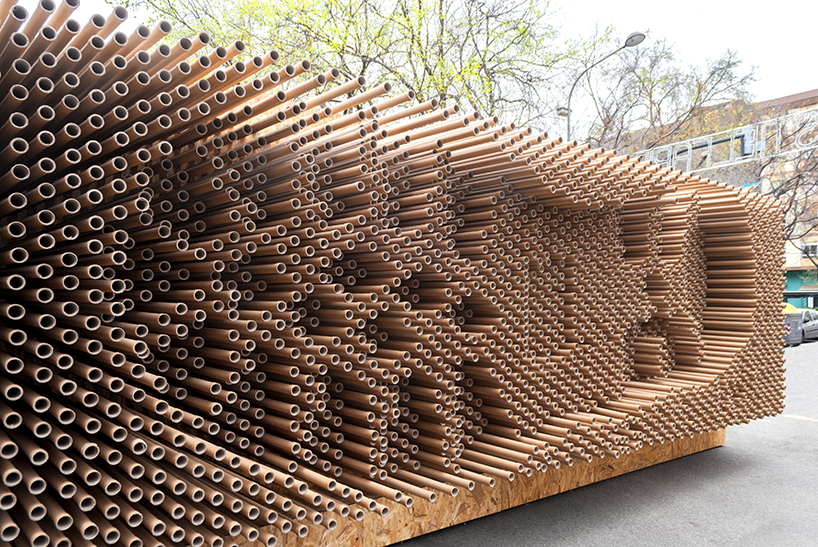 first intervention by carlos tíscar, representing the Footprint left by a giant 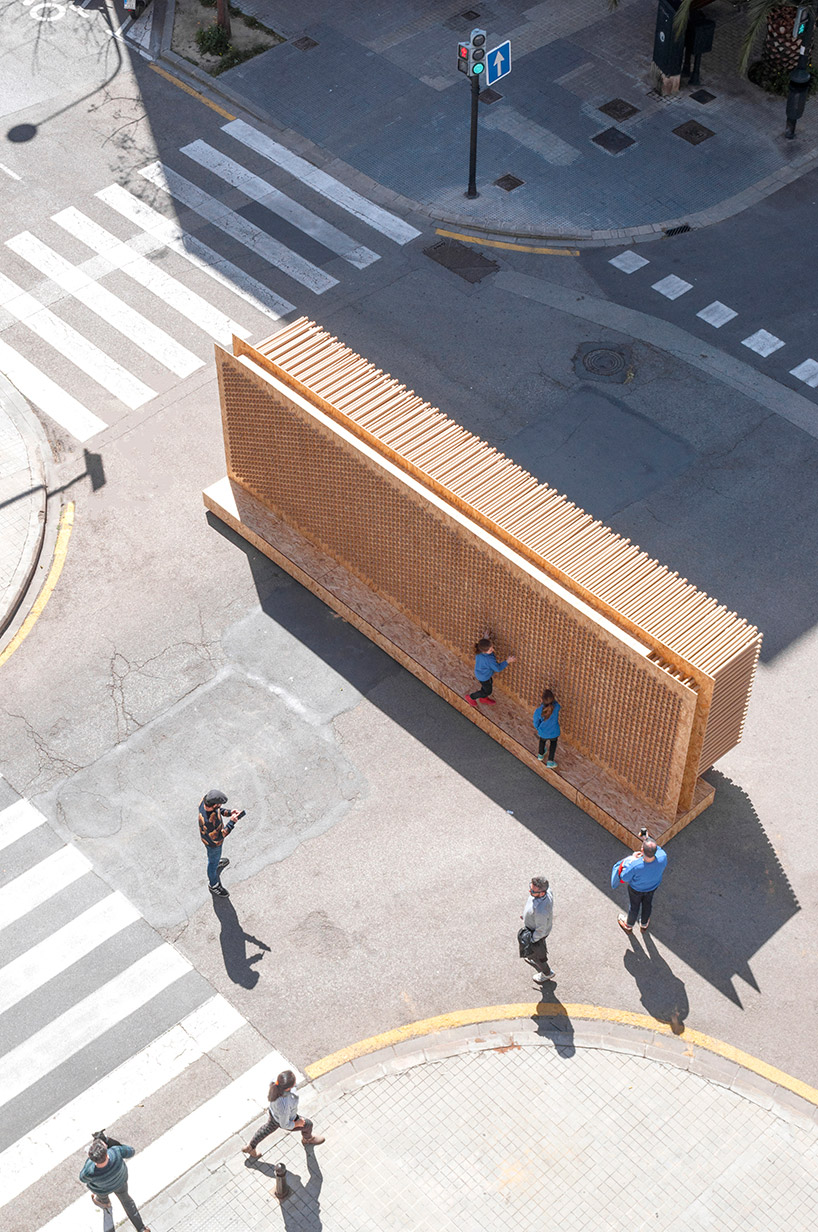 aerial view of the monument 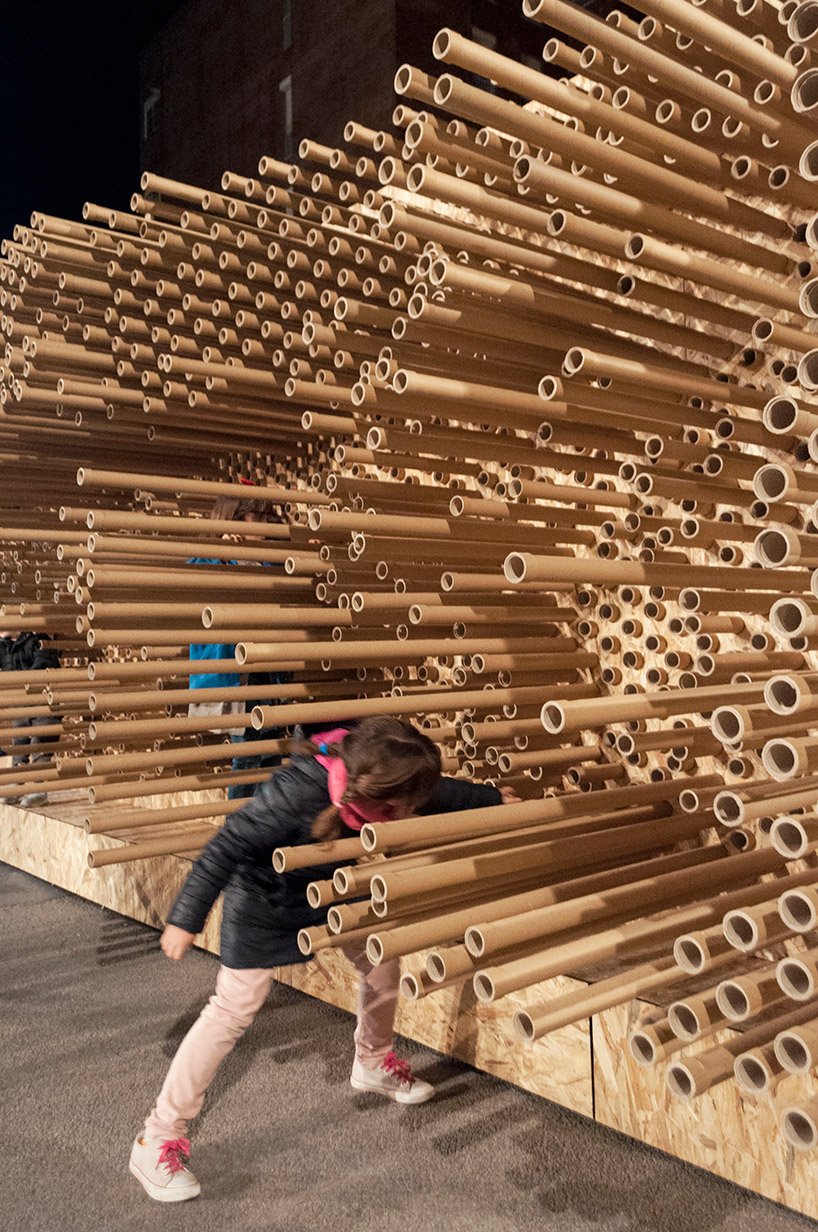 although there are 3 main artists, all the falleros are an active part of the falla 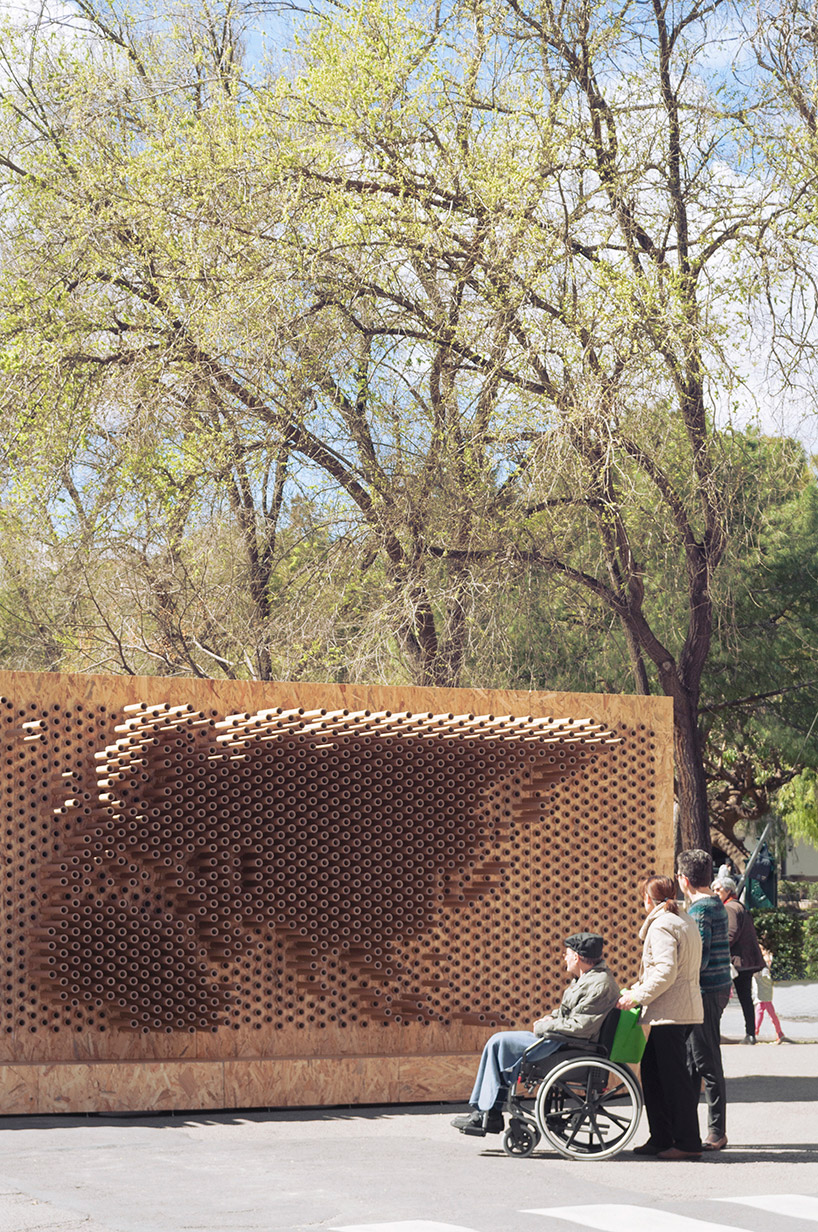 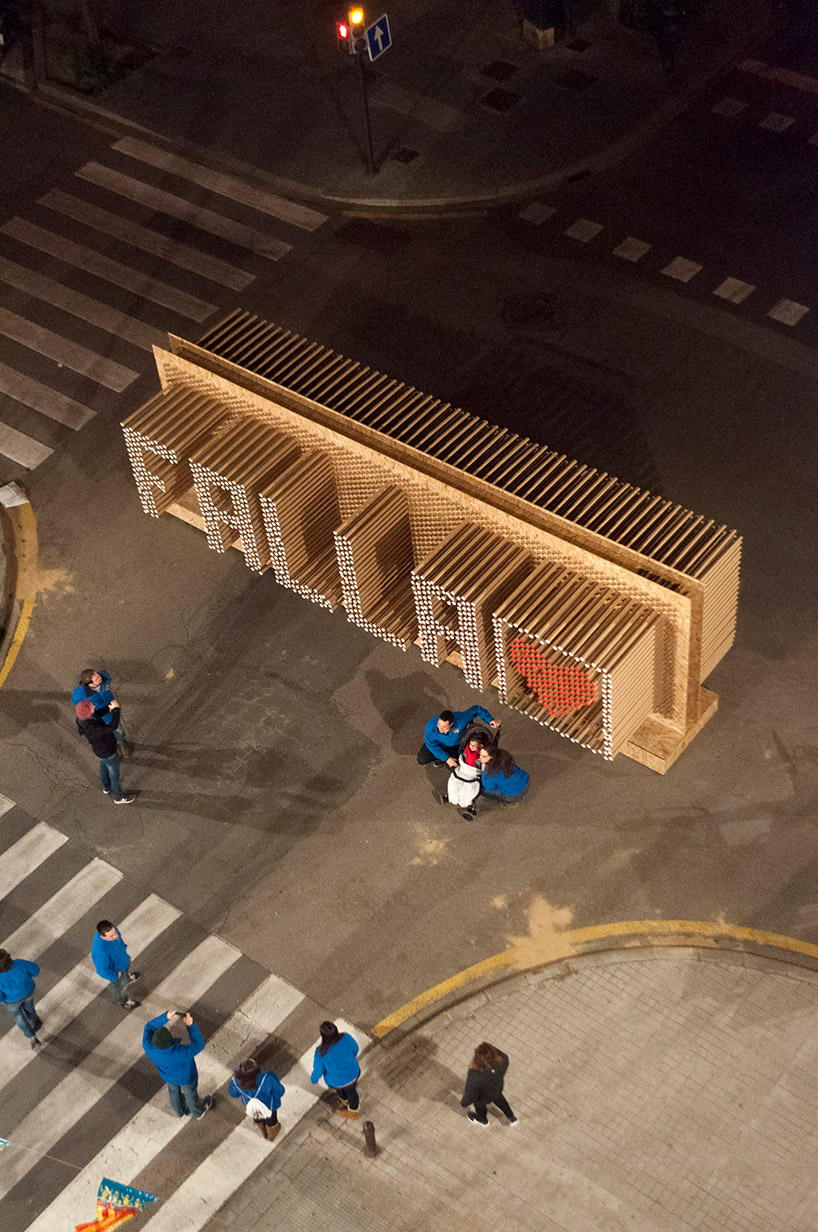 aerial view of the last proposal by miguel arraiz, a thought about what is really a falla 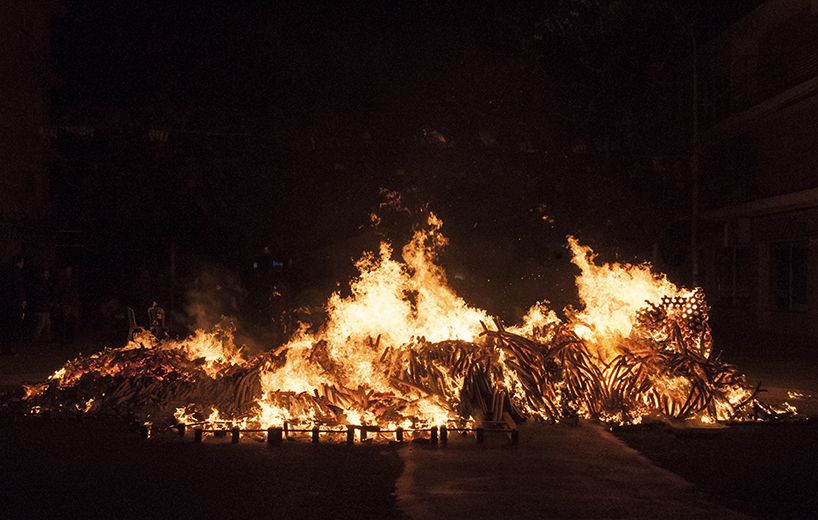 a fundamental part of the fallas festival, the hundreds of monuments scattered around the city burn on the night of san jose, turning the monument into a work of ephemeral art