kinetic energies power ‘no one is an island’ – a gesamtkunstwerk of artificial intelligence, contemporary dance and theatrical scores of music – on public show for the first time during frieze london 2021. fuelled by science, the performance is a future-oriented reflection on how the human mind empathizes with AI. the sculptural robot centerpiece, created by random international, evokes a feeling of likeness from the audience that is accentuated with movements from dancers of company wayne mcgregor.

follow the performance and read designboom’s exclusive interview with random international below. 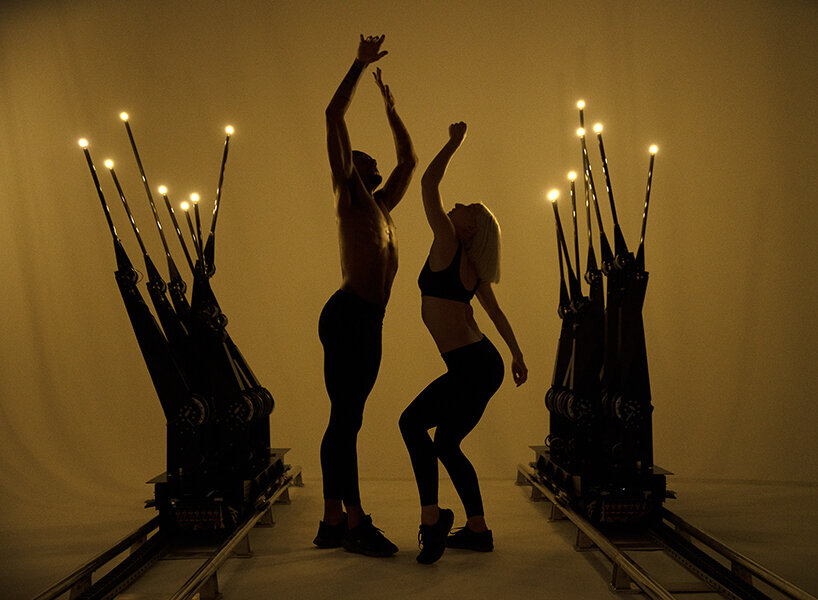 no one is an island: from preview to final performance

‘human beings are imperfect, even the top performers. it is interesting to work with something [the robot] that is so precise. it explores what it is to be living,’ explained wayne mcgregor to designboom at a special preview of the performance in 2020. since then, ‘no one is an island’ has been refined for over a year ahead of its public performances at frieze london 2021. firstly, the artists and partners – BMW i, studio wayne mcgregor, random international and superblue – needed to understand the possibilities of the robot before then exploring how to accentuate empathy. this is all moved by questions about how future generations will interact with automated and digitized processes and environments. 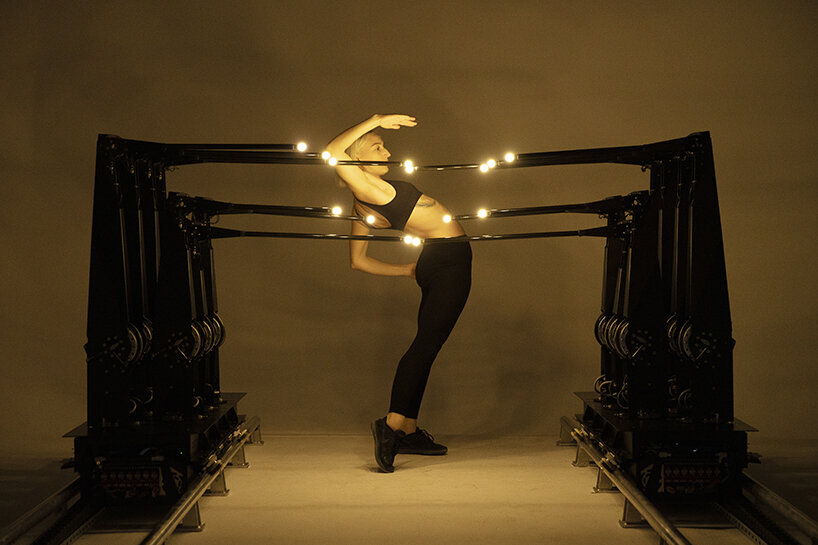 the sculptural robot centerpeice of the performance, known as fifteen points / ii, was created by random international. it sits atop two parallel rails with numerous spindles of arms spidering out of its bodies. these limbs are fitted with bulbs of lighting to illuminate its tips as well as flow of movement. the design experiments with the minimal amount of information necessary for an animated form to be recognized as human. 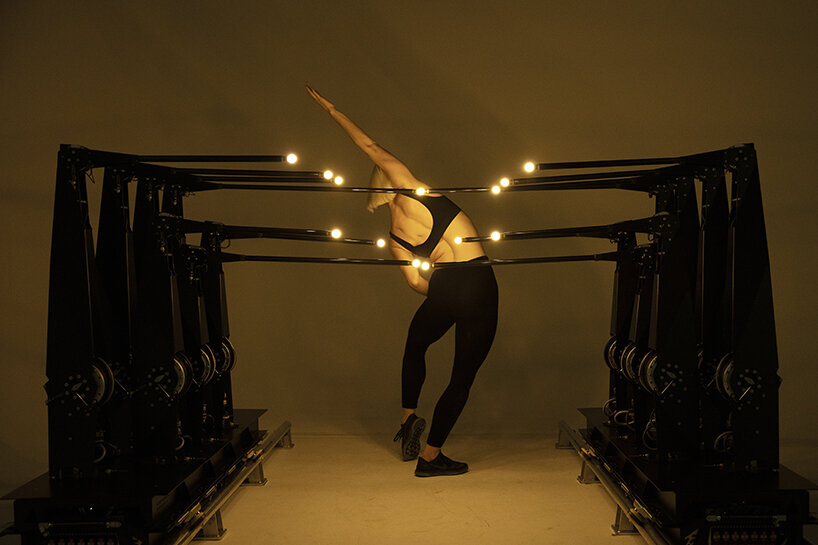 the sculpture – or instrument as studio wayne mcgregor describes it – transitions from a robot to human likeness. dancers from the choreographer’s eponymous company interact with the machine in a live, kinetic performance. energy appears to flow between the performers. the machine’s limbs form the outline of a human shape, mirroring the dancers, learning the freedom of movement, before finally achieving the most human trait of all – the two-legged walk. the audience sees this evolution to build a relationship and empathy with the machine. 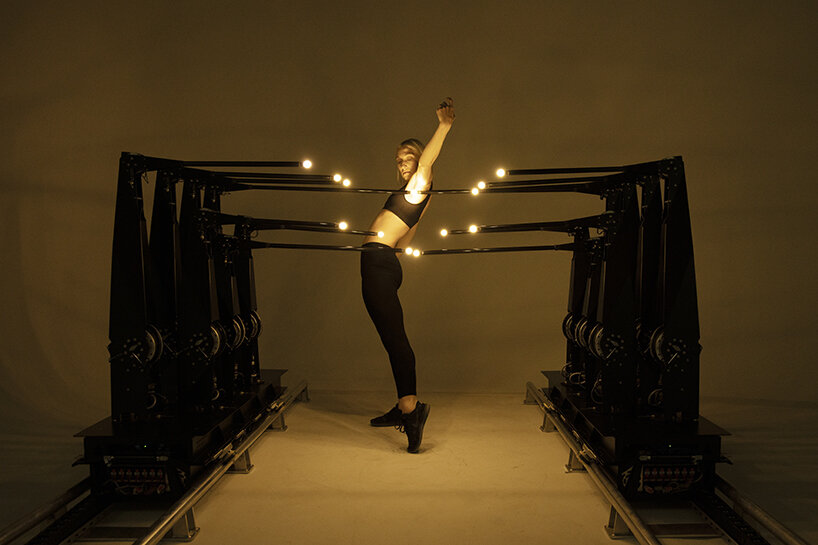 the dancers’ interventions are retranslated with a score by chihei hatakeyama, through the 12-minute performance of ‘no one is an island’. the audience witnesses the machine not only come alive but become human. the gesamtkunstwerk normalizes human interaction with AI for the future. 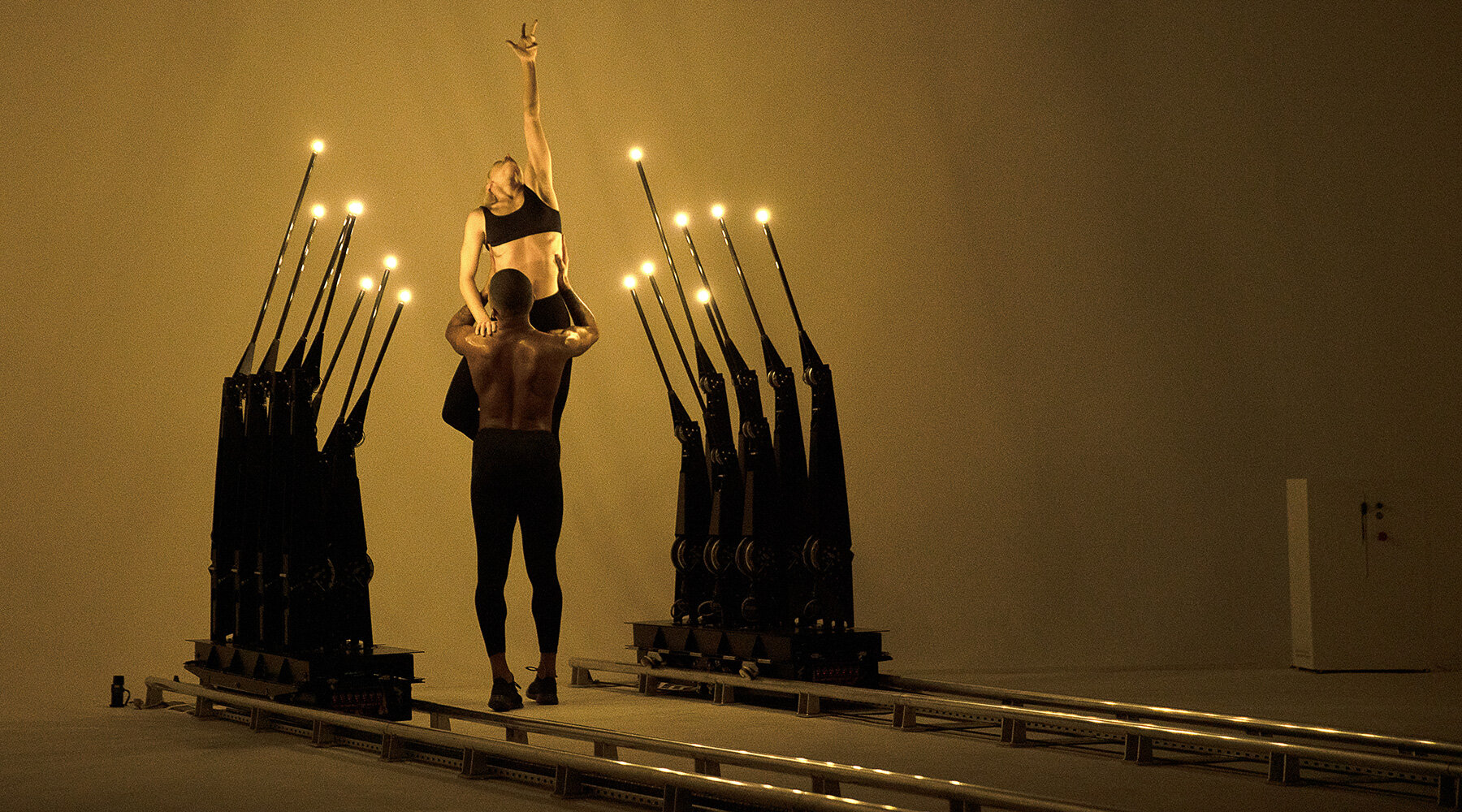 below, delve into designboom’s interview with random international for frieze london 2021, where the technologists also reveal a second artwork on show – body/light – that reinterprets pablo picasso’s famed ‘light drawings.

designboom (DB): what themes does ‘no one is an island’ address?

random international (RI): no one is an island explores our human need to connect with one another, and experiments with both the pitfalls and the poetry that occur when the other is not human but machine. do we develop a capacity for empathy towards that machine just because it tries to move like us? it’s fascinating just how little visual information it actually takes to open us up, emotionally and instinctively. we feel so very comfortable around something that seems to ‘want’ to imitate us. it’s something that leaves us vulnerable to the potential of a betrayal by the machine and, at the same time, offers the possibility of new, previously unfelt, sensations.

the notion of interconnectedness on a personal, as well as a societal level is a subject that we feel a strong need to explore in our work. the precision necessary for the machine to convey the human-like qualities that enable this kind of connection is the result of a delicate balance; the resulting dynamic cannot exist in isolation. the same seems true for the fragility of the parameters and values that hold our human societies together. 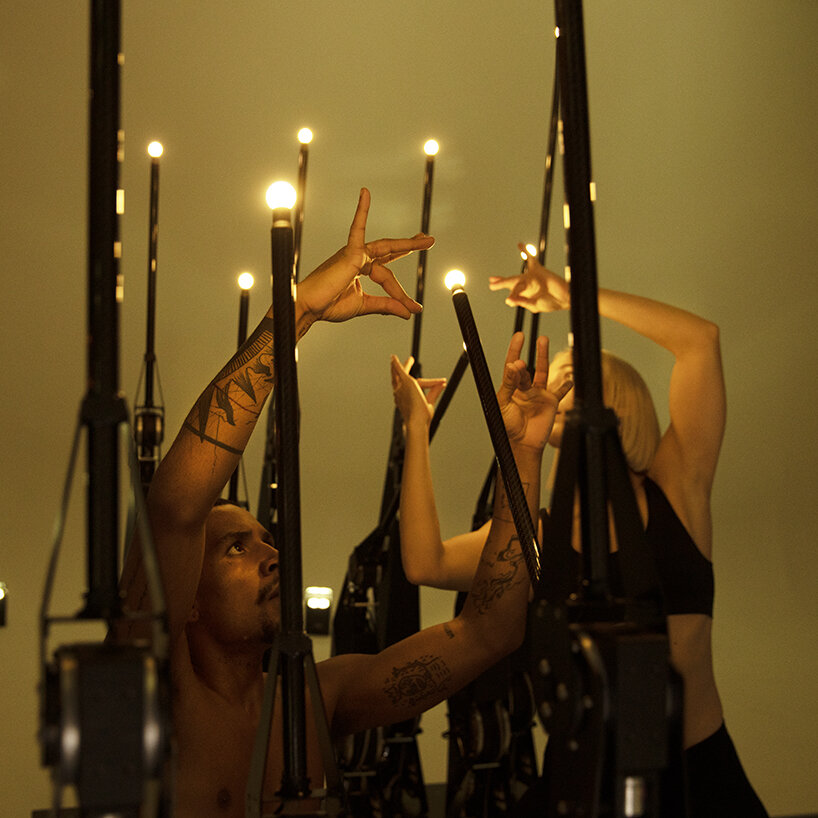 DB: in what ways does the centerpiece – the robotic sculpture ‘fifteen points / ii’ – interact with the dancers from company wayne mcgregor?

RI: the sculpture that lives in the gallery is essentially a machine whose constituent elements are robotic components, each one lifeless and mechanical on its own. throughout the performance, the two dancers witness what could be described as a self-diagnostic process through which the robot slowly comes to life. they are engaging with that process choreographically, responding to its mechanistic movement with their own human movement. as the performance progresses, the dancers seem to wrestle signs of sentience out of the sculpture, which the robot expresses through nothing but motion. by the very end, human and machine walk together. 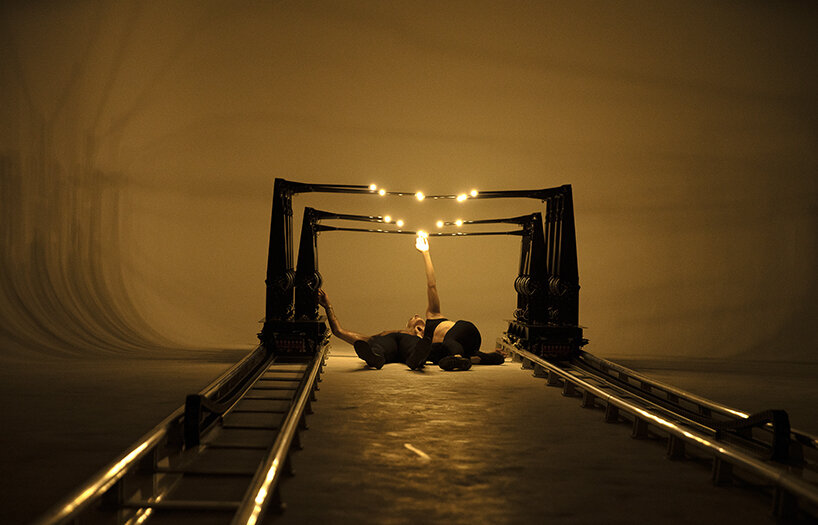 DB: the collaborative work premieres live during frieze london 2021, following an online launch in three chapters due to the exceptional circumstances of the past year. are there any additions/changes particular to the live experience?

RI: there was certainly a sense of evolution. our initial broad questions, surrounding the human capacity for empathy with machines, have developed into a debate about vulnerability as a concrete, emotional and practical consequence of our cohabitation with mechanical objects. if only they move like we do, it seems as though we have no alternative but to imbue these objects with notions of sentience. with regards to the performance of the work itself, the enforced slow motion of the project turned out to be an interesting catalyst for sustained refinement. the way that we set the performative aspect of the work, through the collaboration with wayne, has changed significantly over the year. in having to dedicate more time to the creation process, we ended up giving the sculpture more time to come to life in the performance. where initially we were working within a framework of brief walking and resting cycles, we now see a fifteen minute performance with a clear narrative arc. 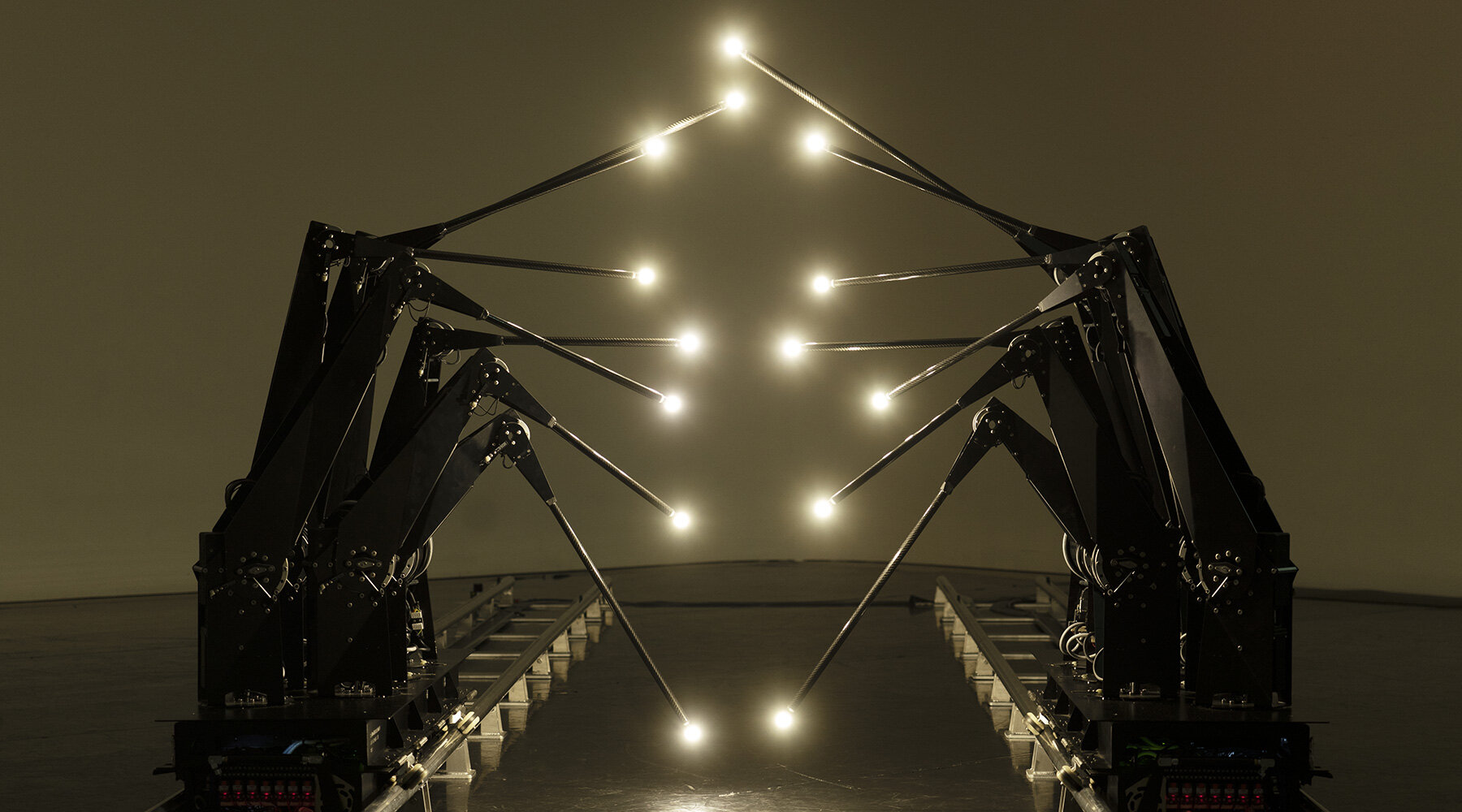 ‘no one is an island’ presented by random international, superblue, studio wayne mcgregor and BMW i. photo: ravi deepres. © BMW AG

DB: in novemeber 2020, designboom visited studio wayne mcgregor in london to preview the performance while the AI technology and the dancers were still learning from one another. how would you describe this learning process? what did each learn from the other?

RI: it’s been incredible to witness just how much of a relationship dynamic can play out through movement alone. it’s been even more noteworthy for us to understand how much capacity we have for a relationship with a machine, and how easily a machine can participate in that dynamic when it expresses itself through a kind of body language that we, as humans, can relate to. this has given us so much food for thought and learning that we are dedicating our next program of exhibitions, showing different bodies of work over the following year, to the overarching theme ‘a machine for living in’. 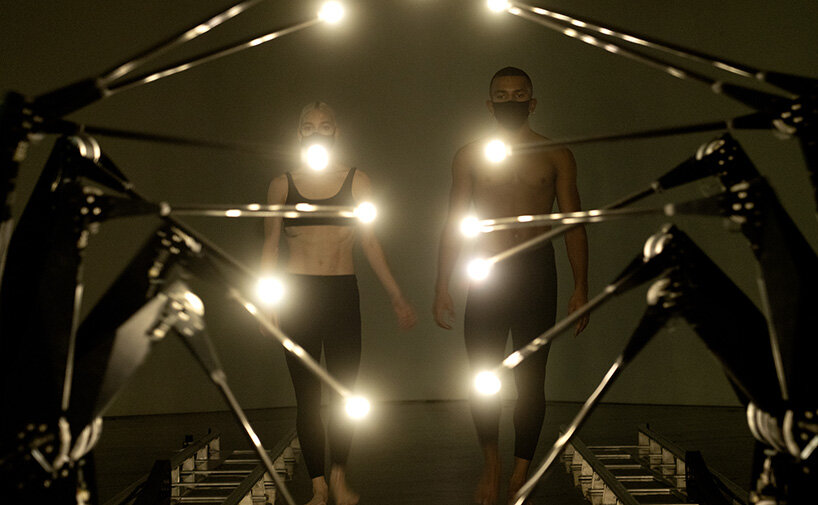 DB: can you share more about ‘body/light’, the second artwork that will be on view during frieze london 2021? in what ways does it reinterpret pablo picasso’s famed ‘light drawings’?

RI: we felt that ‘body / light’ was needed as a counterpoint to the precisely choreographed interventions with the sculpture. where ‘fifteen points’ clearly asks us to remain spectators, watching a machine that imitates the human solely by moving light points in space, ‘body / light’ invites us to engage ourselves on a physical level with the same medium. in ‘body / light’, a machine vision equips our augmented mirror image with a lit echo of our physical movement. these light traces, which follow the movement of our extremities, enable us to create instantaneous light paintings in the three-dimensional space that surrounds our body. it’s a playful way to raise a kinaesthetic awareness of how we move our bodies in space, and to encourage one another to claim authorship for that movement. 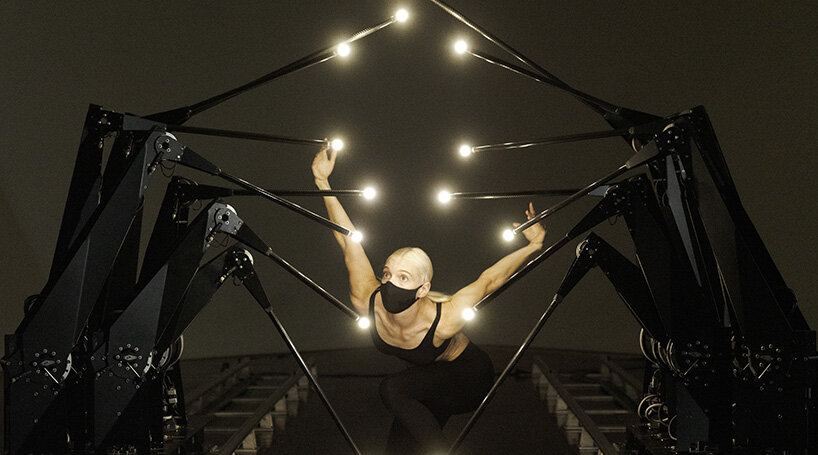 DB: how can viewers take part in the experiential installation? what is their contribution to the project?

RI: anybody can try it, even two people together. stand in front of the installation and start drawing all around your digital mirror image, with nothing but the light that traces the movement of your body. 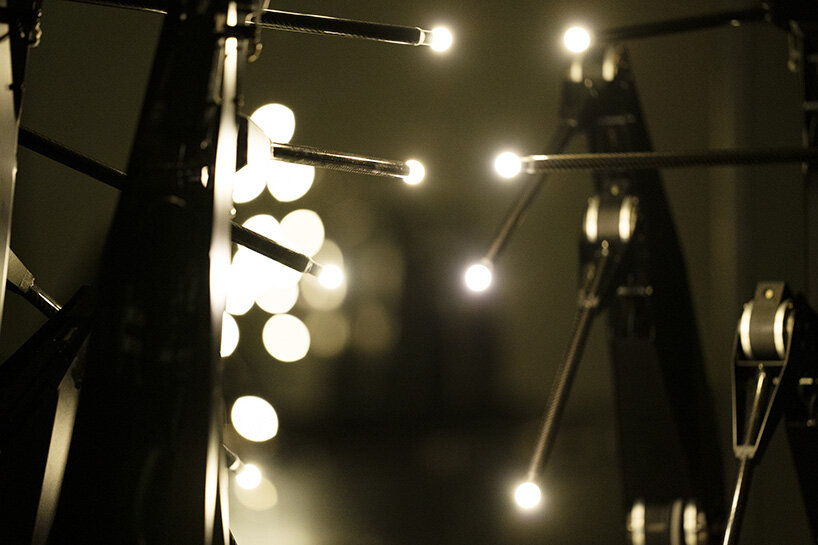 ‘no one is an island’ presented by random international, superblue, studio wayne mcgregor and BMW i. photo: ravi deepres. © BMW AG

DB: how does the expertise of each party involved feed into the final project? how did the collaboration between random international, studio wayne mcgregor, superblue and BMW i develop?

RI: it’s been a co-production in a true sense of the word: by bringing together choreography, music, sculpture and, in BMW culture and superblue, two strong partners that were confident enough to grant our open-ended experimentation a very public forum, we were able to create a performance that would probably be difficult to realise in any other context. for us, the addition of performative elements to the exhibition of sculpture is the future, as it allows for a whole new level of engagement. 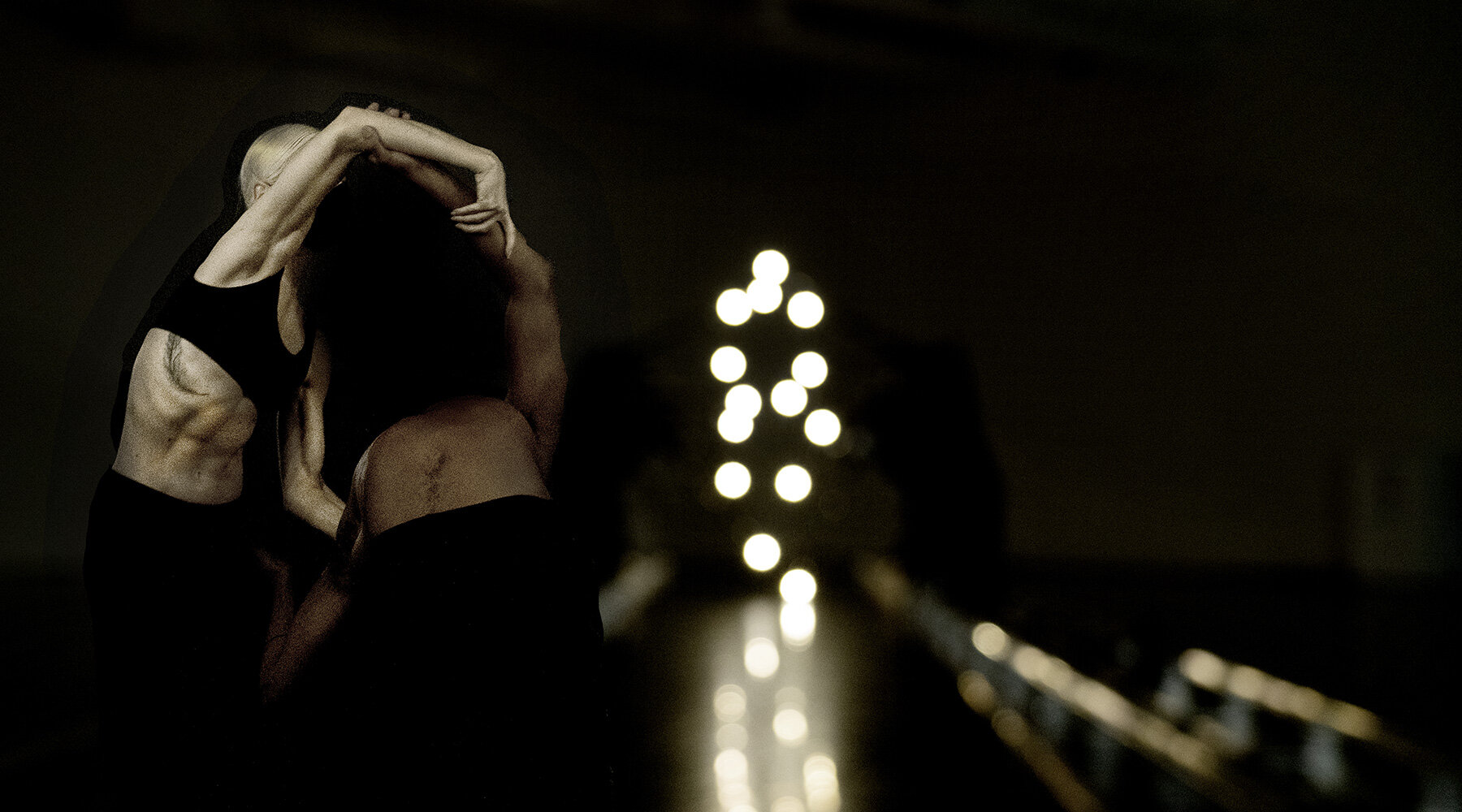 title: no one is an island