directed by oliver astrologo and nils astrologo, ‘venezia’ ventures deep into the hidden history and little-known locales of one of the world’s most magical cities. produced in partnership with rené caovilla, a master venetian shoemaker, the film journeys above the city’s terracotta terrain, through its crystal blue canals, and inside its otherwise unknown workshops. astrologo adventures to capture the everyday life of venice’s inhabitants, where original gondola wooden oars are still crafted by hand and luxurious fabrics are carefully woven on handlooms.

all images by oliver astrologo

astrologo’s short film uncovers venetian secrets that have been handed down from father to son for generations. as the camera pans from canals to bridges, and buildings to boats, the scenes subtly project viewers to a venice that existed 500 years ago. images of gondoliers immersed in their craft are shown in tandem with drone captures of the city from above, offering views of the extraordinary workshops from a long lost era, and the mesmerizing architectural quality of the city. see more of oliver astrologo’s films of italy here. 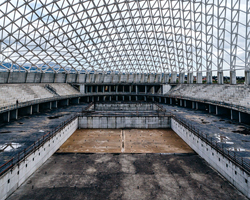