ON THE intersection of innovation, design, creativity and sustainability

Back in 2010, Swiss running shoe brand On (read more here) unveiled its first prototype. More than 10 years later, the brand born from garden hose experiments — which now counts tennis superstar Roger Federer as a co-owner and collaborator — continues to revolutionize the sensation of running with its CloudTec® technology.

On the occasion of Art Basel 2022, On invited designboom to discover art, both in the city and outside, and offered us to test the shoes, which we must say, lived up to the high expectations. 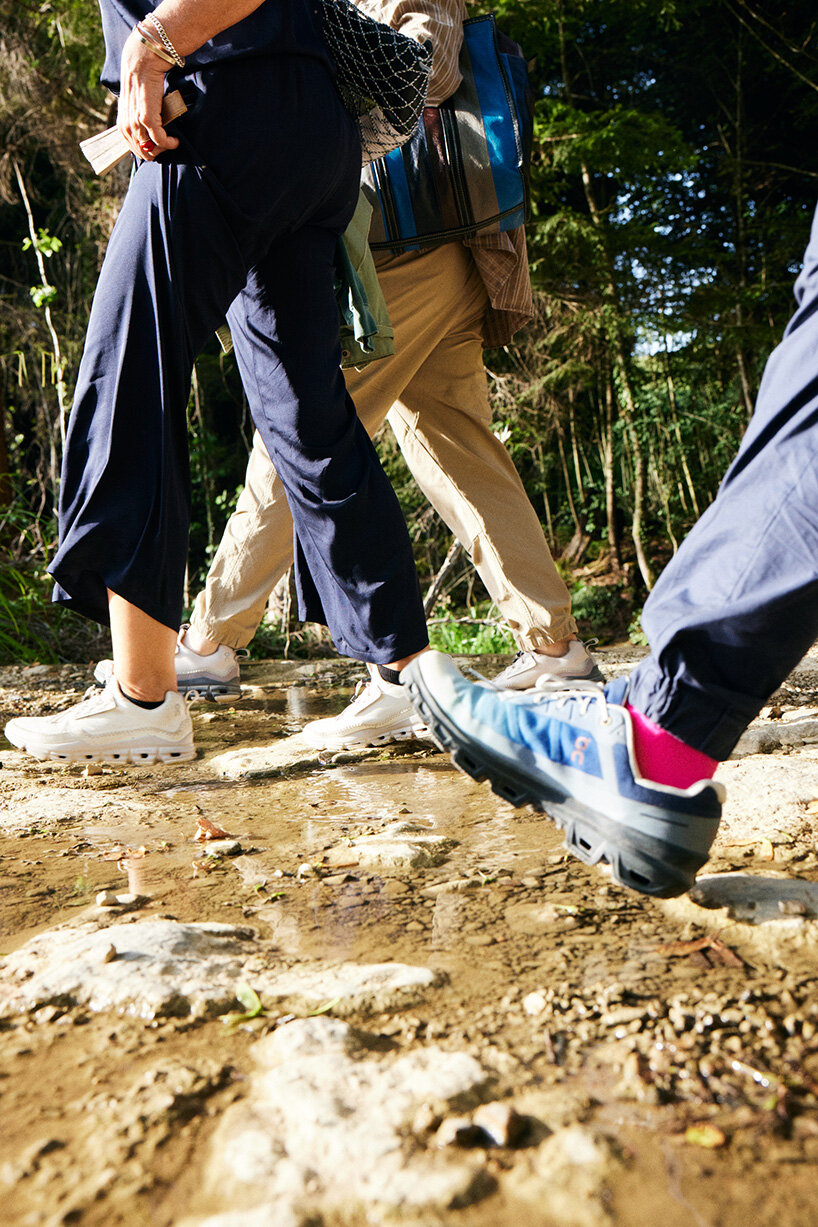 images by On unless otherwise stated

On was founded by six-time Ironman champion Olivier Bernard and his friends David Allemann and Caspar Coppetti with one simple mission—to create the ultimate running shoe. After making a quite primitive prototype with a cut-up garden hose, Bernard asked Allemann and Coppetti to try the shoe. Both saw the potential of the design, and the three men began building the first On business plan while hiking in Engadin. In January 2010, the company was officially founded.

From the initial hosepipe prototype, the On team developed their innovative CloudTec® technology, creating multi-directional cushioned soles for soft landings and explosive take-offs. ETH Zurich confirmed the effectiveness of the technology in a 2011 study that demonstrated test runners wearing On shoes ran at significantly lower pulse rates and lower blood lactate levels. 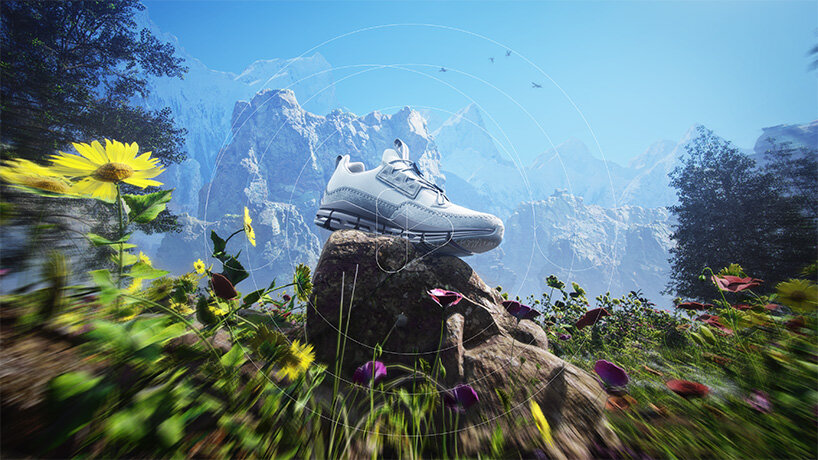 IT’S NOT JUST ABOUT SHOES…

But On doesn’t stop at developing impressive technology. In fact, the brand continuously reinforces the idea of the incomparable impact exercising outdoors has on our wellbeing. On different occasions, On has stated that its mission is to ignite human spirit through movement. 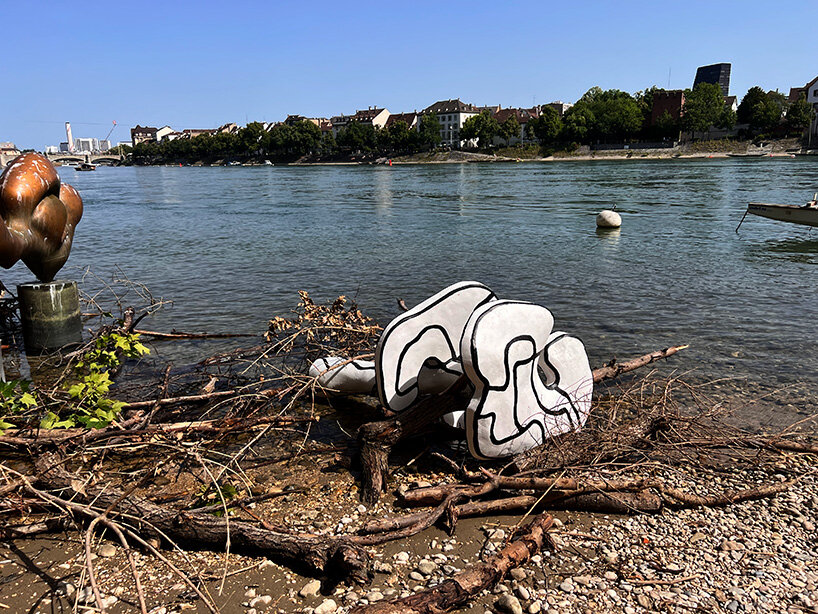 WALKING AROUND ART BASEL? ON HAD US COVERED

During Art Basel 2022, On amplified this statement by hosting two different activities where movement was always involved. Called Art Walks, the first activity allowed us to discover the highlights of Parcours, Art Basel’s public sector for site-specific works situated throughout Basel’s historic Old Town. The meeting point was the On check-in area on Messeplatz where we changed shoes and began the city tour. 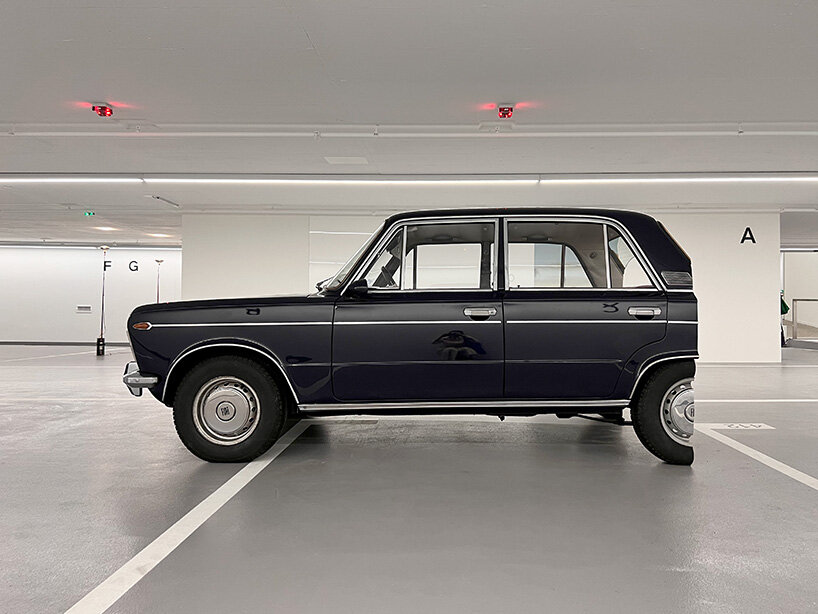 Led by independent curator Gianni Jetzer, the Art Walks were the perfect activity to enjoy art, discover new places in Basel, and hit the sweaty streets, not just comfortably but also in style. Highlights from the walks included Maria Loboda’s The Year of Living Dangerously — a kind of readymade mix-media installation occupying a strip on the banks of the Rhine featuring a series of renowned sculptures thrown in the water and surrounded by the usual rubbish; and Simon Starling’s A-A’, B-B’, which was installed in an underground parking, where the white walls resembled those of a gallery. The artwork is at its core the collision of two very different sliced objects — a car and a painting. The connection between these two, seemingly unrelated, is the former Fiat boss, Gianni Agnelli. 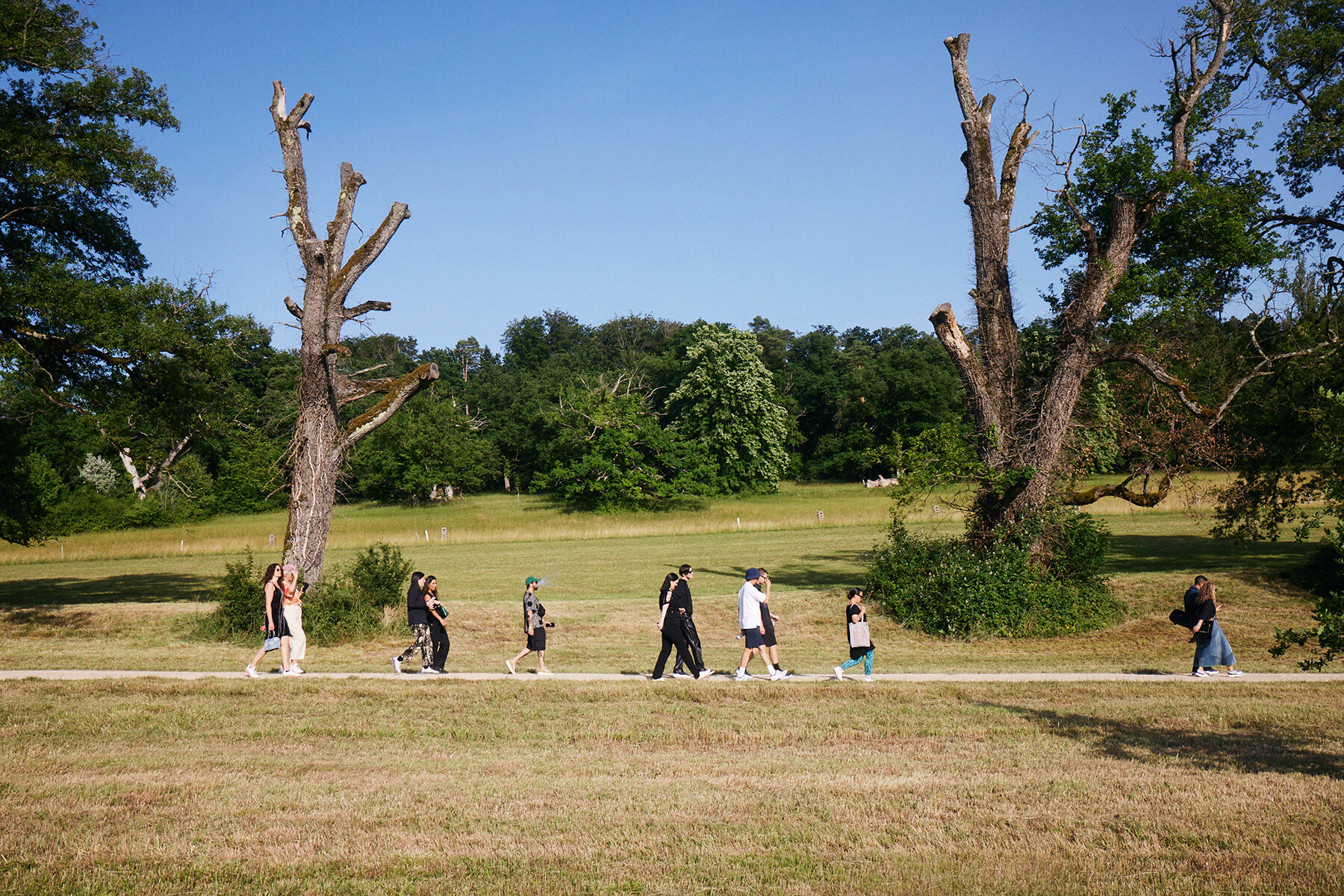 For the second activity, On took us to the countryside to test the shoes in a natural setting. Little did we know the brand had for us other surprises. We first encountered ourselves with massive five hundred-year-old oak trees, diving us into the past. Because of summer, we were not allowed to go off-trail, but we were able to enjoy them from afar. 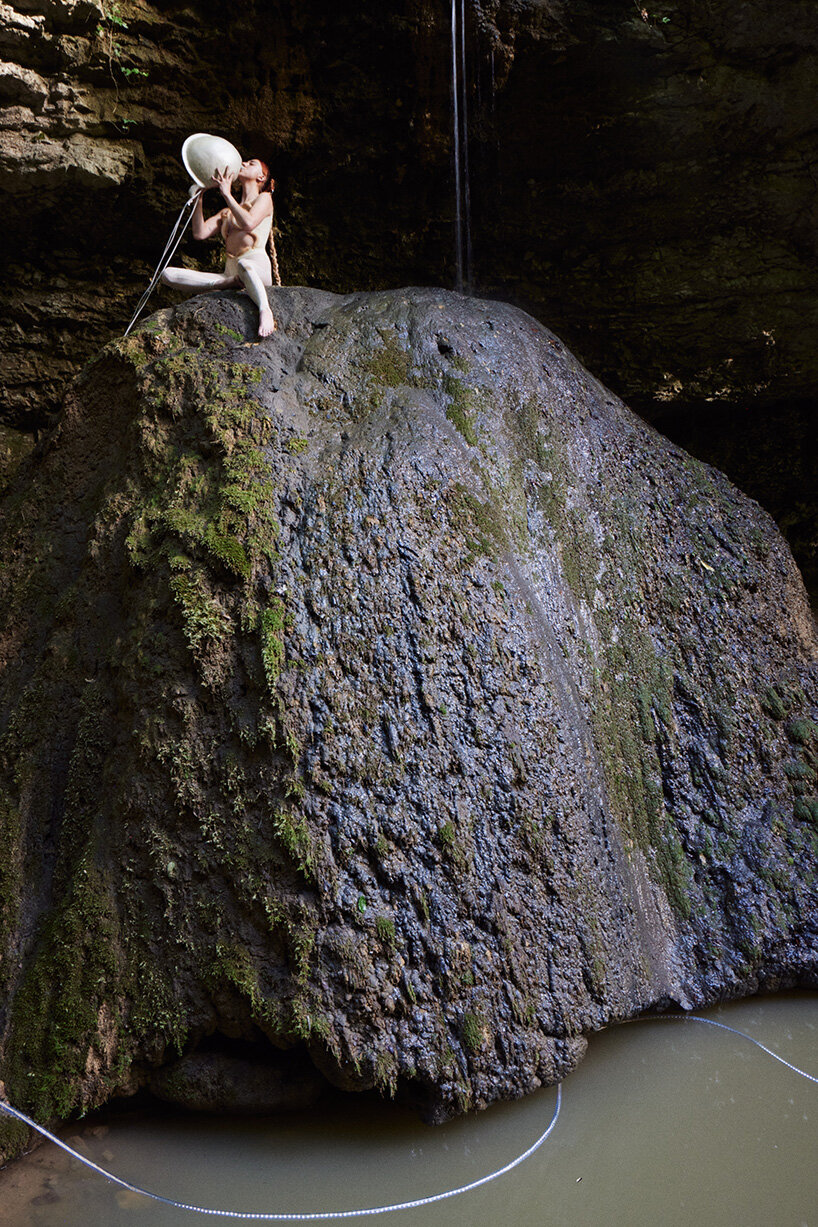 We then crossed the forest, and once we reached a waterfall, the first surprised was revealed. It was Salome Chatriot performing — just for us — with her breathing machine. Embedded in the natural landscape, Chatriot breathed the forest as we caught our breath back.

The second surprise was waiting for us at the end of the walk — a vegan dinner cooked by artist and chef Sandra Knecht. Her practice has seen her investigate the idea of home and identity, and food has been one of her mediums. From 2016 – 2019, Knecht hosted a dinner series in Basel titled Immer wieder sonntags (Again Every Sunday) where she explored what home tastes like. 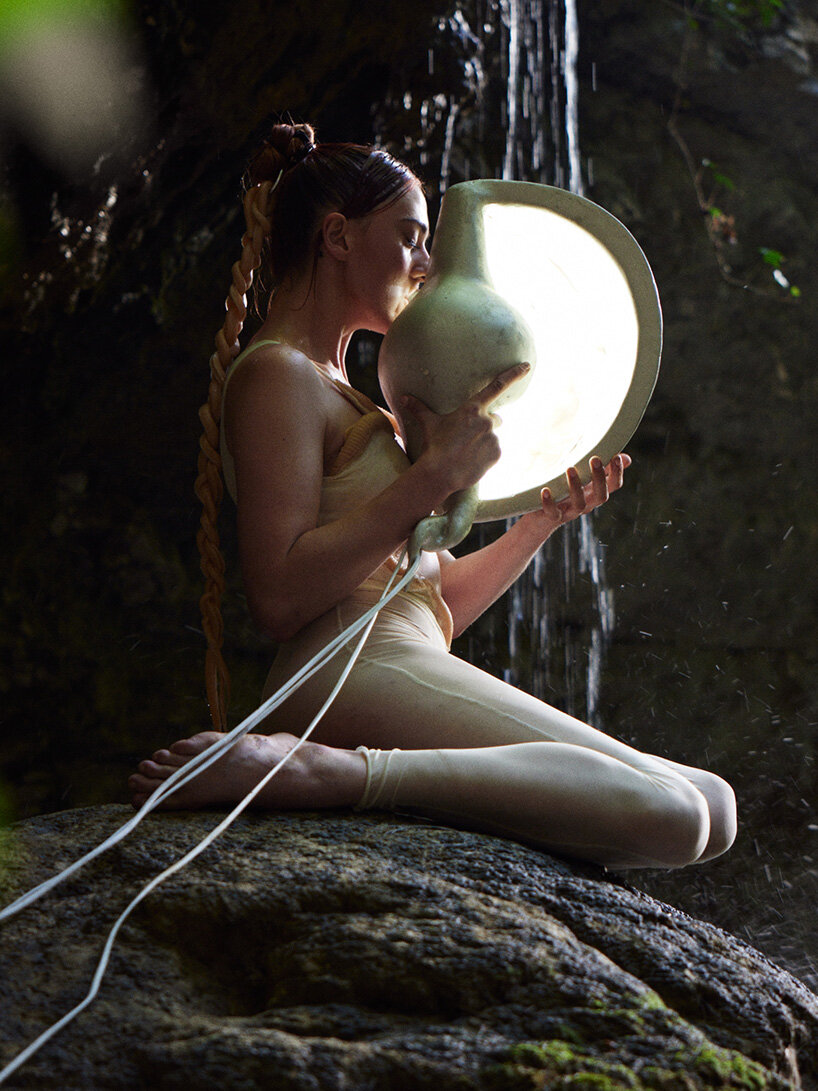 Knecht kicked off the On dinner with a cold white almond bowl, followed by a deconstructed vegan kebab, and closed it with cherry soup, vanilla ice cream and crumble. 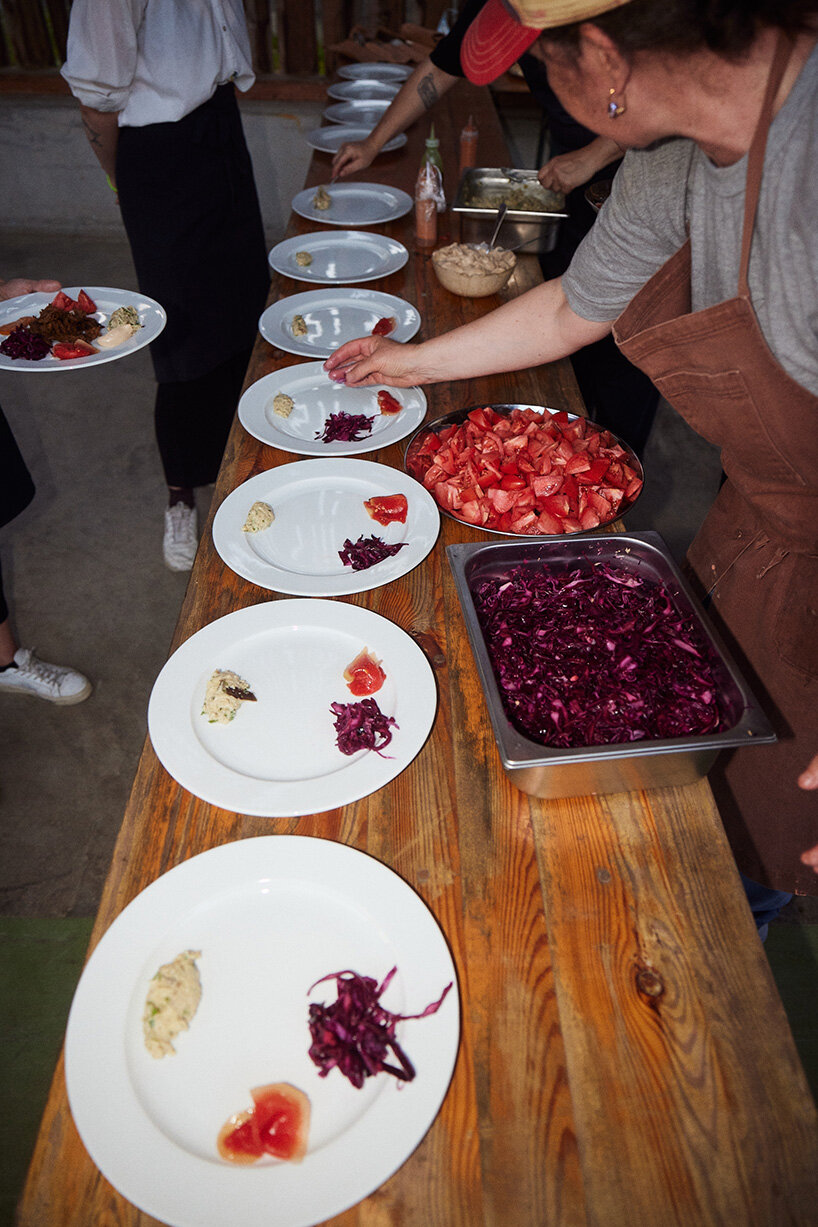 After testing the shoes and getting to know more about On, it was clear that its strongest asset is that the brand lies on the intersection of innovation, but also design, creativity and sustainability.

But On doesn’t doesn’t limit the Art Walks to those in Basel. In fact, the company is providing a new digital motion-activated platform called Sound Walks. The immersive sound and video experience features three different audio tracks, each composed by a different artist, inviting listeners to explore one of Art Basel’s three city locations: Basel, Miami and Hong Kong. Each 20-minute track offers a blend of the city’s genuine audio environment and experimental ambient elements, and is intended to be experienced while walking.

The visual and acoustic landscapes have been created in collaboration with the Bureau Borsche design studio and various audio artists and can be found here. 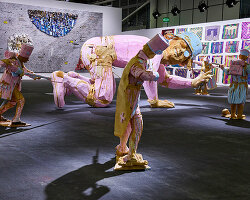