while the history of land art dates back to the 1960s, the movement is as boundary-breaking and abundant as ever. what emerged as a gravitation towards the use of natural materials in sculpture quickly developed into a thoughtful, conceptual, and process-driven approach to art-making — one forged by a group of pioneering artists. some made minimal, ephemeral interventions in the landscape, while others chose to use mechanical, earth-moving equipment to make their mark. typically, land art was documented through photography, film, and map-making for exhibition in galleries — records still widely observed and treasured to this day.

many of the early land artists were especially drawn to the vast emptiness of the american west, removed from the urban centers of the commercial art world. it was here that christo and jeanne-claude swept ‘running fence’ across the properties of 59 ranchers in northern california; that robert smithson coiled the earthwork ‘spiral jetty’ across utah’s great salt lake; and where james turrell is completing his monumental roden crater project in the desert of northern arizona. 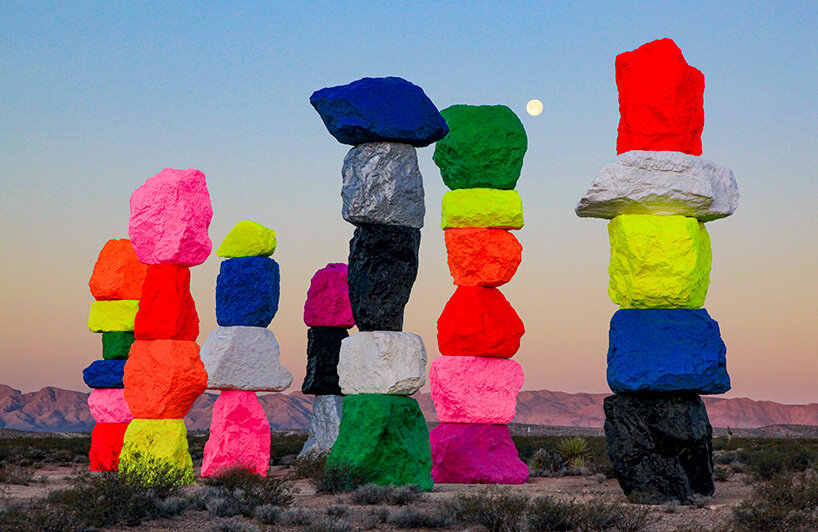 in a state whose terrain inspired numerous historic and contemporary land art interventions, the nevada museum of art will expand its signature ‘art + environment’ conference from a weekend event into a season of virtual and in-person components. with the support of the museum’s center for art + environment, land art: past, present, futures will be presented from september 23 – november 19, 2021, offering new opportunities to reflect on the interaction between the natural world and the built environment. the nevada museum’s center for art + environment supports the practice, study, and awareness of creative interactions between people and their environment. it is home to a research library with archive collections from over 1,000 artists and organizations, and has commissioned works including ugo rondinone’s las vegas public art installation, seven magic mountains in 2016; and trevor paglen’s non-functional satellite sculpture, orbital reflector in 2018. 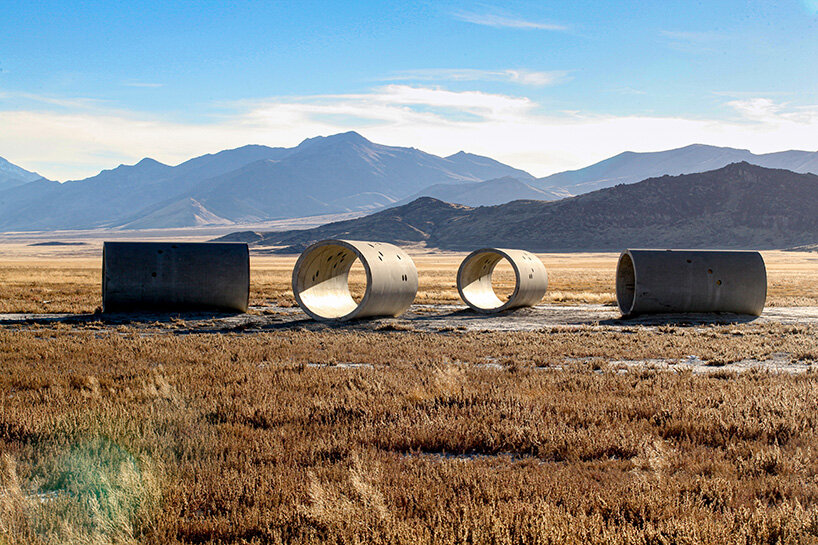 framing the ‘art + environment’ season are two major acquisitions by the museum. the first is a lifetime collection of land art contact sheets and full set of 50 large-scale prints by photographer gianfranco gorgoni — whose images brought worldwide attention in the 1960s and 70s to the work of michael heizer, walter de maria, and robert smithson, to name a few. the museum also acquired the archive of judy chicago’s ephemeral, outdoor atmospheres projects, also inaugurated in the late 1960s, which were initiated in an effort to ‘soften’ the heroic male posture of land art.

drawing on these sources and many others, land art: past, present, futures seeks to consider issues surrounding the histories of these landscapes, indigenous people’s relationships to the land, and gender attitudes and environmentalism. informing the presentations will be the history of the museum’s recent projects with artists ugo rondinone, maya lin, trevor paglen, and lita albuquerque, as well as recent acquisitions of artworks and archival material from andrea zittel’s high desert test sites group, cannupa hanska luger, cauleen smith, postcommodity, nancy holt, agnes denes, reko rennie, and cai guo-qiang. 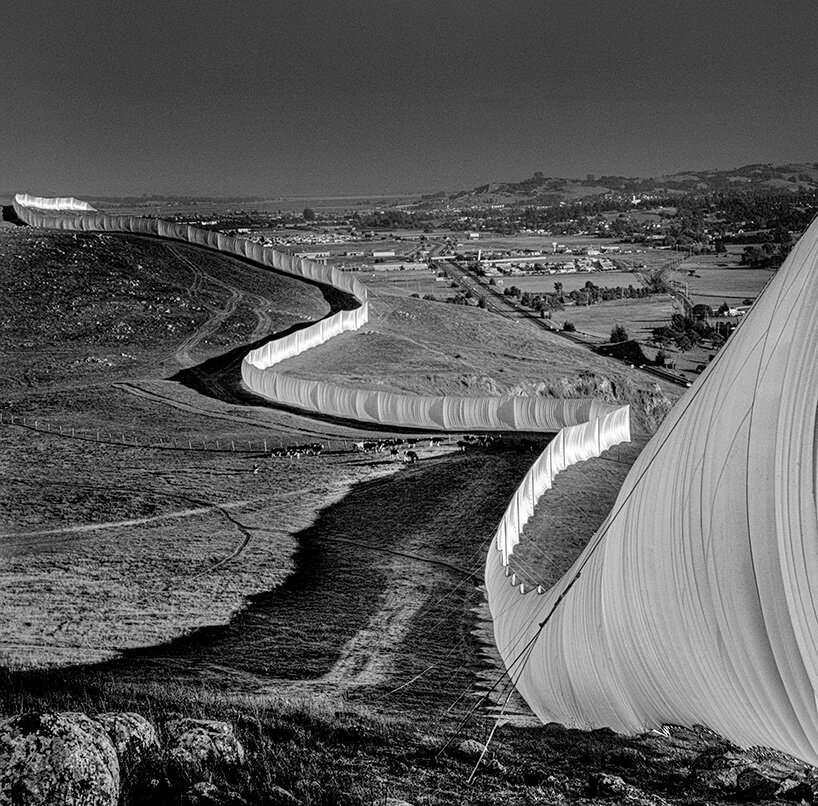 exhibitions on view throughout the season and into 2022 include: gianfranco gorgoni: land art photographs; land art: expanding the atlas; judy chicago: dry ice, smoke, and fireworks archive; and disturbances in the field: art in the high desert from andrea zittel’s A-Z west to high desert test sites. read more about each in more detail below — 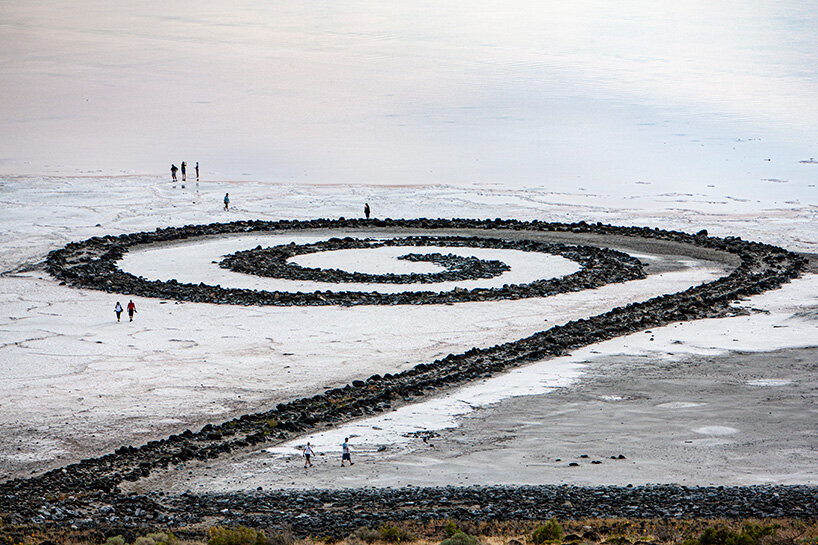 on view from june 26, 2021 – january 2, 2022, gianfranco gorgoni: land art photographs features over 50 large-format photographs, including iconic images of many first-generation earthworks in the american west. after meeting new york gallery owner leo castelli in 1969, gorgoni was invited to travel to the desert and photograph earthworks by christo and jeanne-claude, walter de maria, michael heizer, nancy holt, richard serra, robert smithson, and fifty years later, ugo rondinone. gorgoni was the first photographer to collaborate on the ground with many of these artists, and his images often serve as the definitive photographic record of their projects. 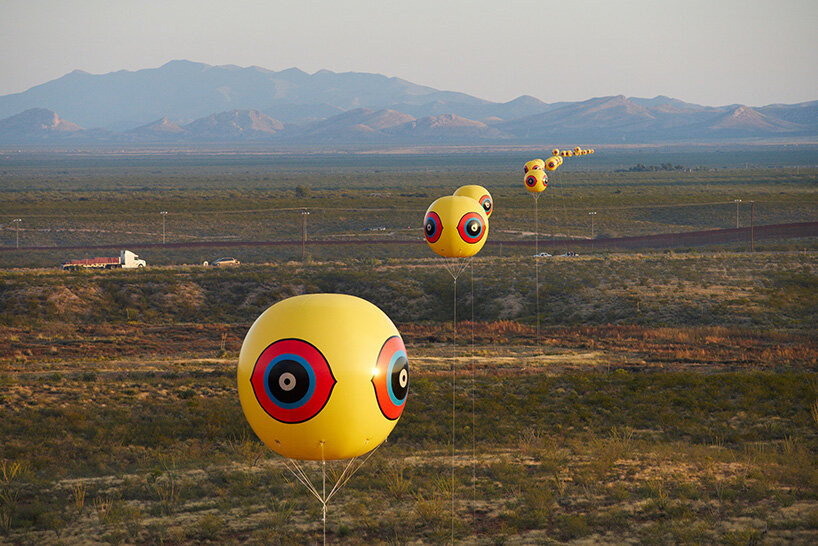 gorgoni famously shot the work of artist robert smithson, including spiral jetty, a 1970 earthwork located in utah. the holt/smithson foundation — which works to produce exhibitions, publications, programs, and research in continuation of the creative spirit of artists nancy holt and robert smithson — also recently announced public weekend openings from july to october for smithson’s 1971 earthwork, broken circle/spiral hill. located on private land near the city of emmen in the netherlands, broken circle/spiral hill is smithson’s only earthwork outside of the united states. smithson donated the artwork to the people of the netherlands, however the specifics of how the work should be cared for and who should take responsibility for the land on which it sits is unknown. in 2021, the wish is to secure the future of the artwork and to find support to bring the land into public ownership.

also from june 26, 2021 – january 2, 2022 at the nevada museum of art is land art: expanding the atlas, an exhibition drawn primarily from the museum’s permanent art and archive collections. the show combines work by both prominent and lesser-known artists, whose works interrogate the definition of land art and question the established canon. while much of the world remains enchanted by the monumental land-based desert works that emerged in the american west in the late 1960s and 70s, there is equal interest in creating critique and engaging in environmental and social dialogue. artists featured include justin favela, cauleen smith, postcommodity, and judy chicago. 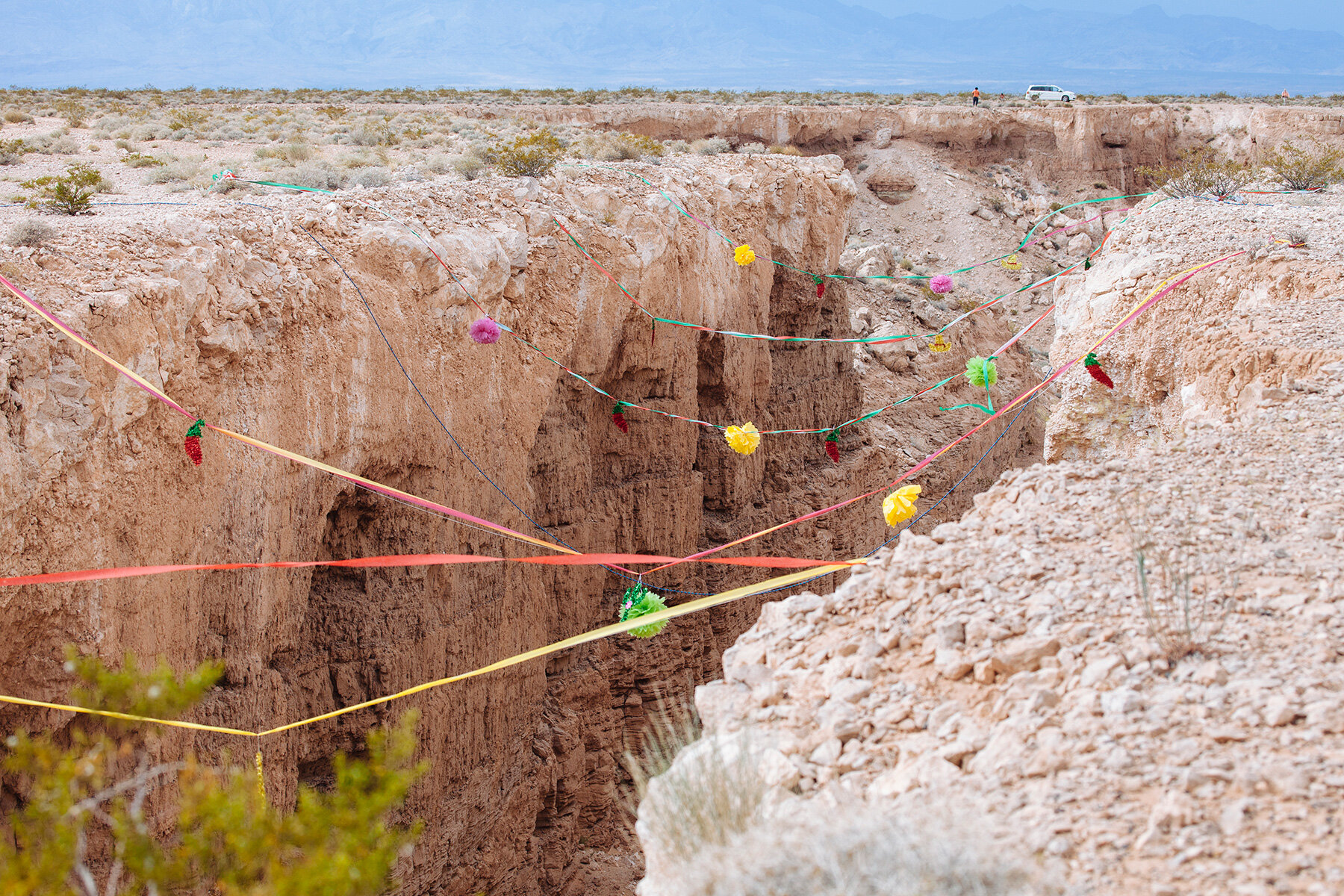 the ‘art + environment’ season also encompasses an exhibition from from august 28, 2021 – march 27, 2022 dedicated to artist judy chicago, who embarked on a series of ephemeral atmospheres performances using colored smokes and fireworks in the deserts of the american west in 1968. these projects were intended to ‘soften that macho land art scene,’ as she puts it. long overlooked by art historians and scholars, chicago’s atmospheres series provides a critical counterpoint and essential context to the predominantly male land artists working at the time. the exhibition at the nevada museum of art features selections from chicago’s fireworks archive, which was acquired by museum in 2018. 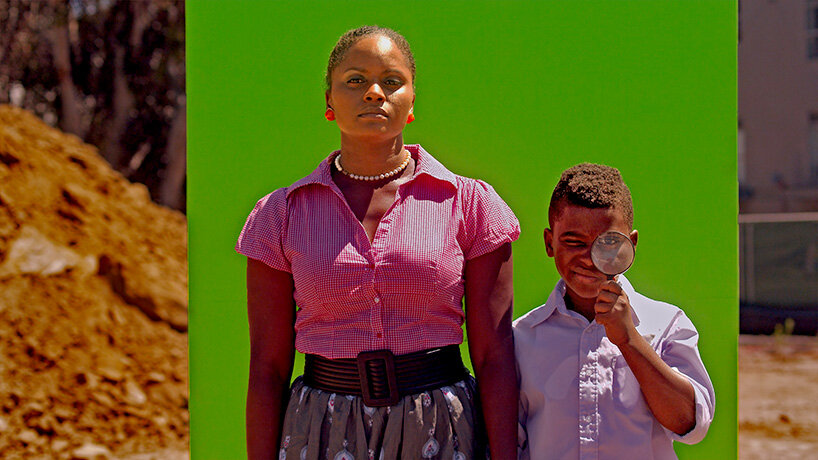 finally, from july 3, 2021 – february 6, 2022, the exhibition disturbances in the field: art in the high desert from andrea zittel’s A-Z west to high desert test sites, opens at the nevada museum of art. founded in 2002 by artist andrea zittel, high desert test sites (HDTS) is a nonprofit arts organization based in joshua tree, california dedicated to the belief that engagement with its desert community can offer new insights and perspectives. HDTS is known for its biennial events in diverse locations, performances, workshops, film screenings, publications, residencies, and excursions — as well as two community-based programs known as kip’s desert book club and high desert test kitchen. the exhibition features highlights from the HDTS archives. 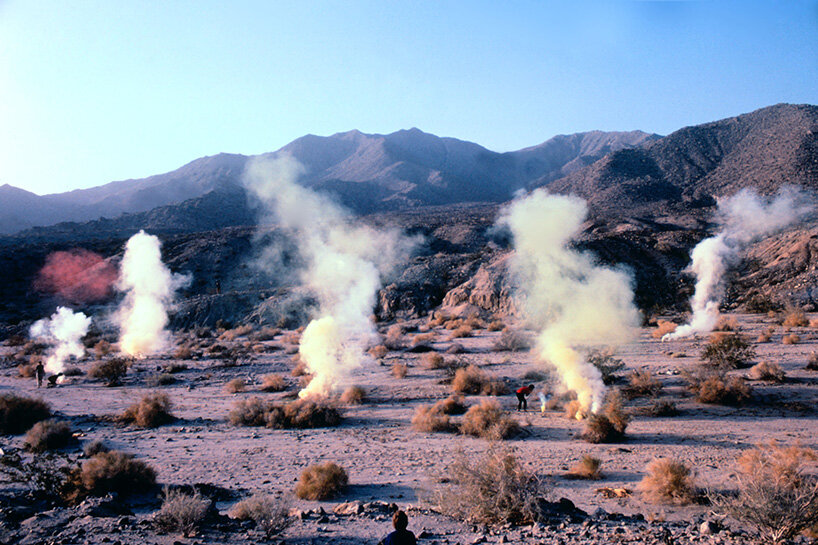 also on the site of some of zittel’s high desert test sites projects is the ‘wagon station encampment’. first covered by designboom back in 2012, the project comprises a series of sleeping pods adjacent to the artist’s home and studio amid the rugged landscape of joshua tree. twice a year, when the desert climate is mild, zittel invites artists, hikers, and researchers to stay in the encampment, facilitating social engagement and personal exploration. blending both communal and private spaces, the encampment reflects a ‘sci-fi pioneer aesthetic’ that zittel was innately drawn to. ‘everybody has their desert fantasy,’ she says, ‘my particular fantasy was probably living on an alien landscape.’ see a short film following life at the experimental ‘wagon station encampment’ by art21 on designboom here. 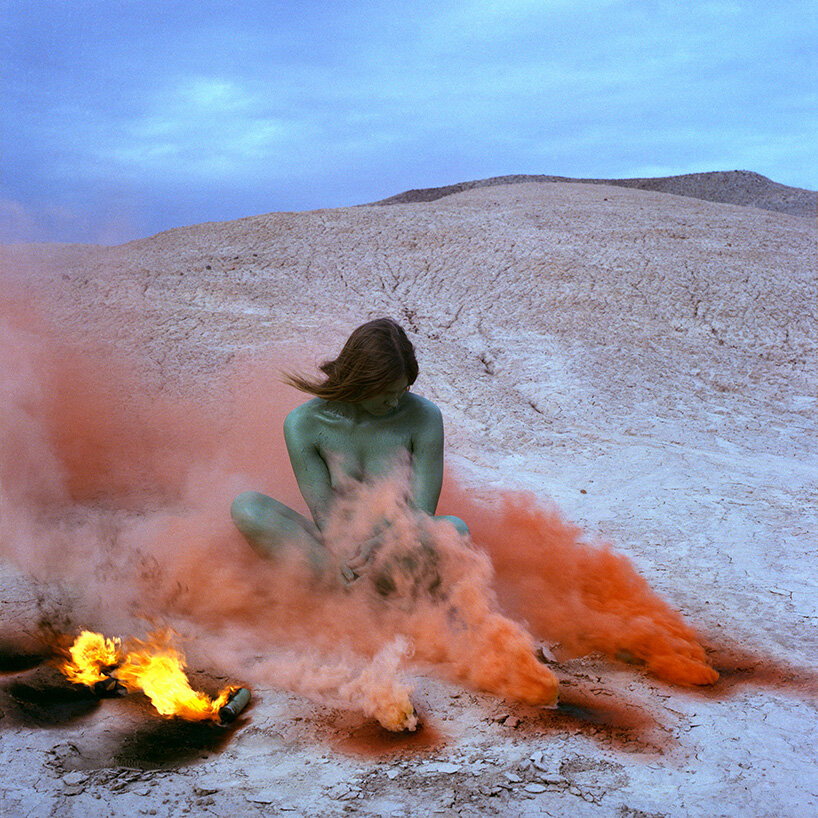 discover more land art projects on designboom here, including a ‘sinkhole floor drain’ in the village of yubulu zhai, china and the ‘walking wall’ by andy goldsworthy. 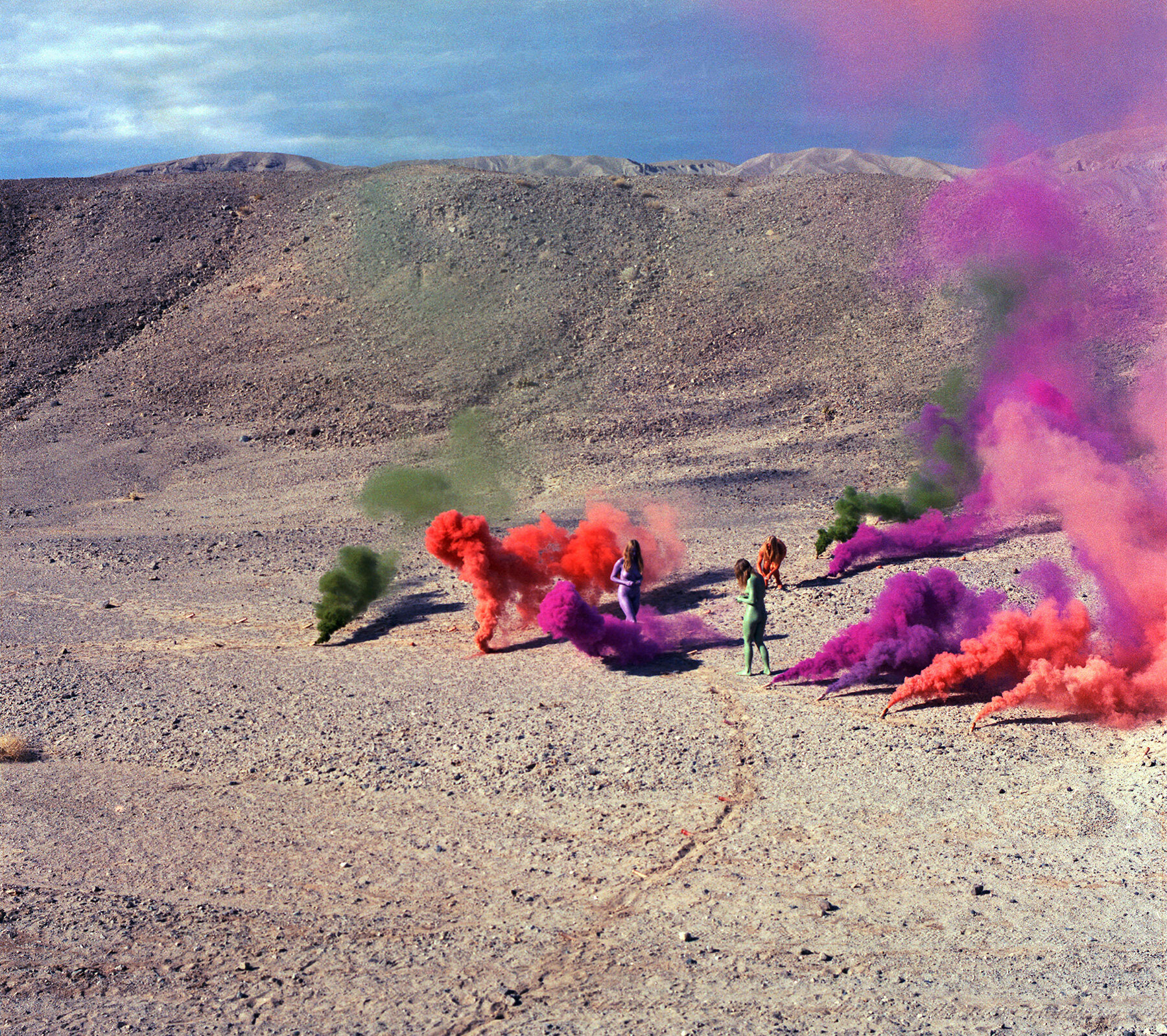 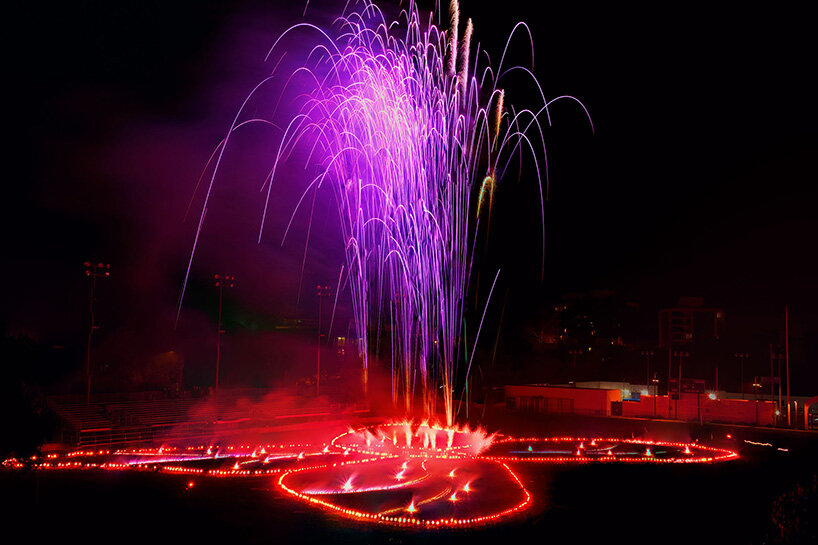 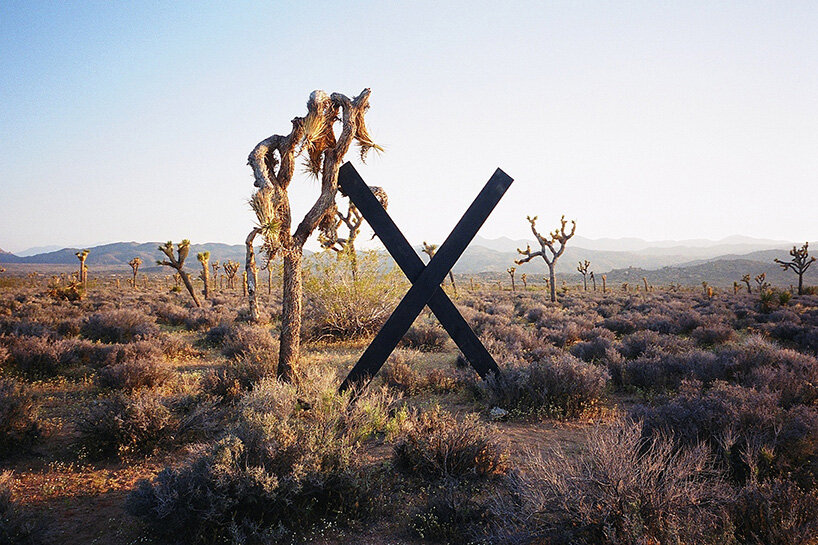 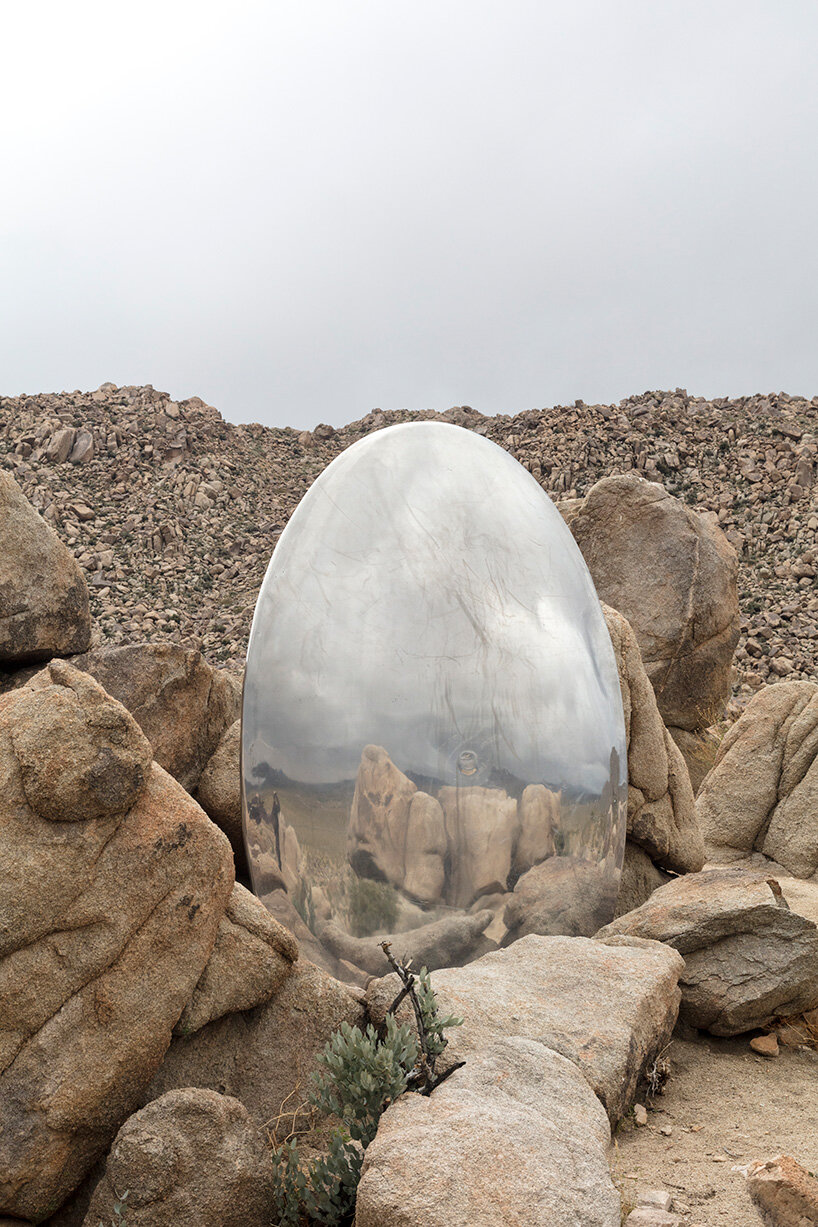 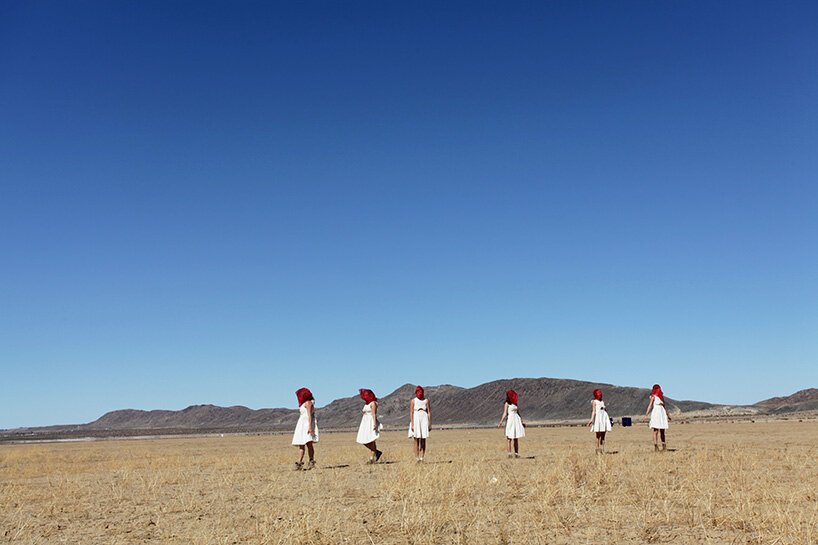 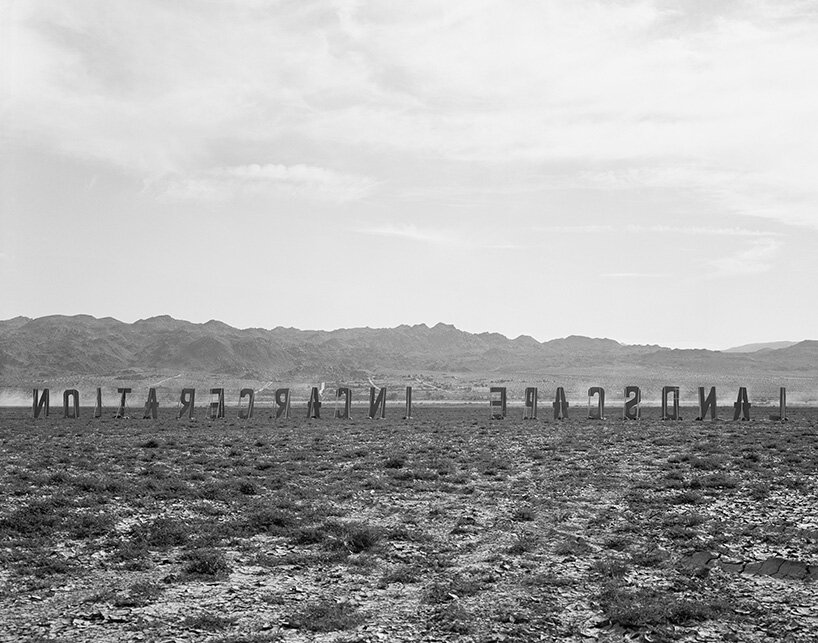 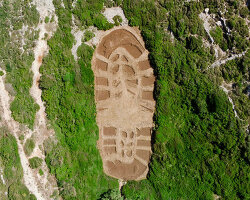 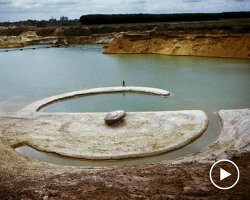