artist paul pfeiffer uses sophisticated editing technologies to dissect the role mass media plays in shaping contemporary consciousness and brings our focus to the often overlooked aspects of the media. in his video works which focus on professional sports events (including basketball, boxing and hockey) pfeiffer extracted the athletes who are normally the stars of the game and shifts our focus to the spectators, sports equipment or trophies won. meditations on faith, desire and contemporary culture, pfeiffer addresses our society’s obsession with celebrity. in combination with his videos, he also develops computer-generated re-creations of props from hollywood thrillers along with mini-dioramas of sets from films. for the biennale of sydney 2008, pfeiffer has brought together his interests and combined them in his mixed-media installation ‘vitruvian figure’, a futuristic sculpture which found its inspiration from the olympic stadium in sydney.

in close collaboration with bligh voller neild architecture – the architects of the original stadium – pfeiffer has created an eight metre model of the stadium which morphs the existing design which seats 80,000 – 10,000 to a structure, which if built, would scale almost 10 times the current seating capacity. with a spinning view inside and the revolutionary vision of its imagined audience, ‘viturvian figure’ evokes an eerie apparition of spectacle, paying homage to the modern visions of first-century BC roman architect, vitruvius. 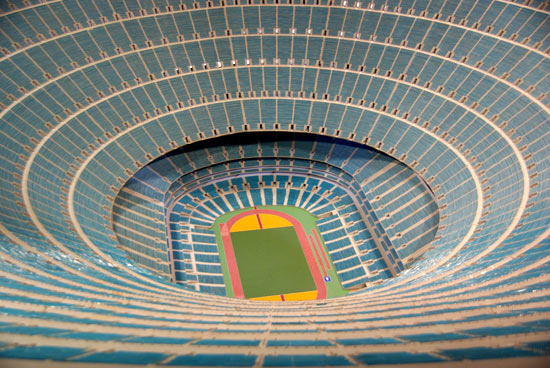 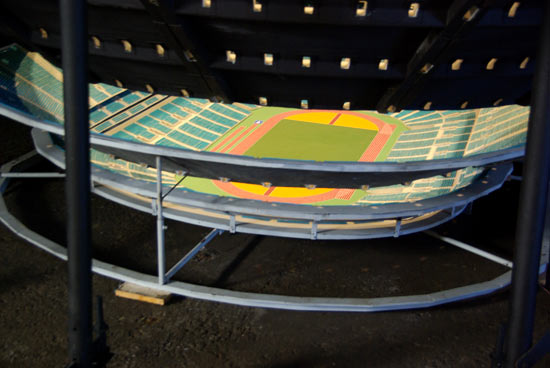 the biennale of sydney 2008
andrea chin I designboom