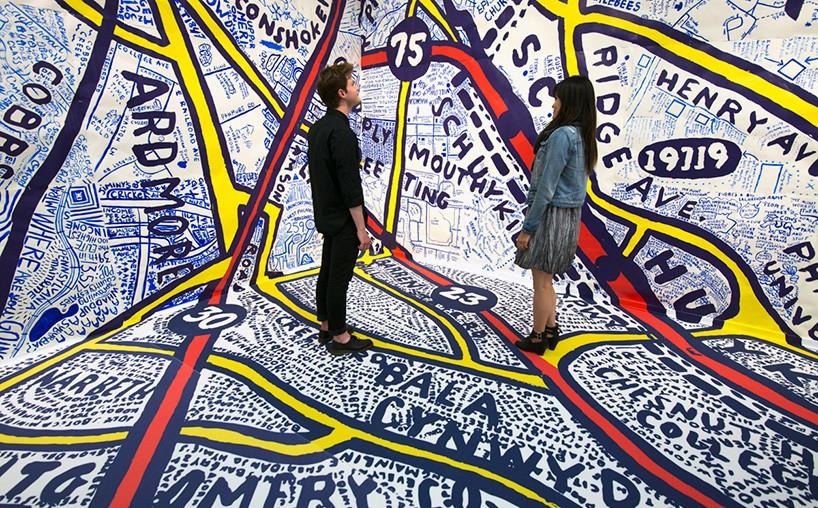 pentagram’s paula scher worked in collaboration with students at her alma mater, the tyler school of art, to create ‘philadelphia explained’ – a large-scale installation that details the city and its surrounding areas. the hand-painted map created by scher and 154 participants covers the walls and floor of temple contemporary, the school’s 2,100 square-foot gallery. ‘philadelphia explained’ is can be viewed from now until july 17, 2015. 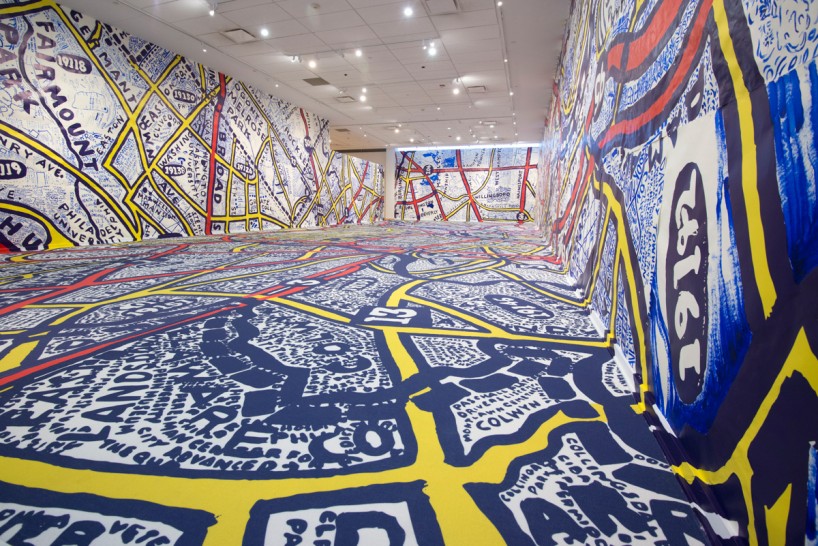 all installation photos by sam fritch courtesy of pentagram

scher was invited to create the installation as part of tyler’s distinguished alumni mentorship program. sponsored by the office of the dean of the tyler school of art, the program is designed to foster continuing relationships between tyler alumni who are established in their careers and recent graduates and students. scher selected as her mentee keith hartwig, a 2011 graduate from tyler’s architecture department.

hartwig was chosen because he has an interest in the subject matter and was capable of organizing the installation, working with 133 current tyler students. a personal reaction to information overload, scher’s map paintings recreate places around the world in multi-layered, hand-rendered typography, indentifying locations and landmarks and at the same as providing social commentary.

for ‘philadelphia explained’ scher asked students to join her in graphically describing the city they know and love. the participants were each given a portion of the map to complete, adding their own level of detail to scher’s larger graphic outline. 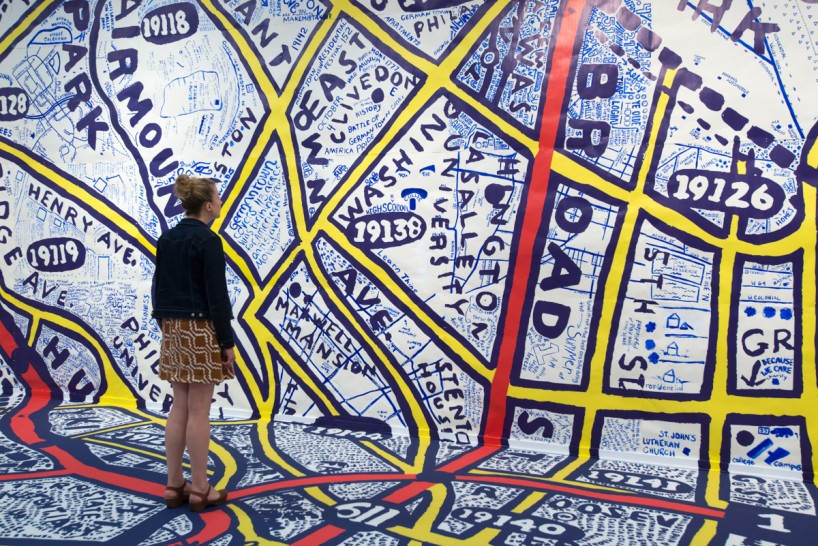 scher created a map that provided the basis of the installation, with additional details painted by 154 tyler students and other participants

to create the more expansive environment for this installation scher and her team at pentagram had to go through several stages of process. scher first created a 40 ½” by 60” (approximately 3 ½’ by 5’) black-and-white painting of the area. this map was photographed and vectorized into a graphic image. she then selected major roads and streets to be digitally colored red and yellow; the delaware and schuylkill rivers were colored blue.

scher then gave the file to hartwig, who used three-dimensional modeling to figure out how the graphic would wrap around the walls and floor of the gallery. hartwig segmented the map into 258 panels that would be given back to scher and the students for a further level of hand-drawn detail. 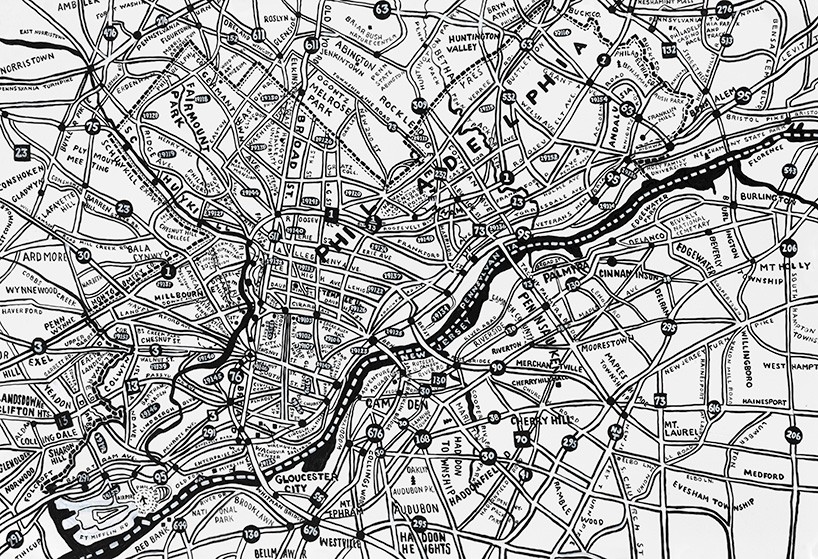 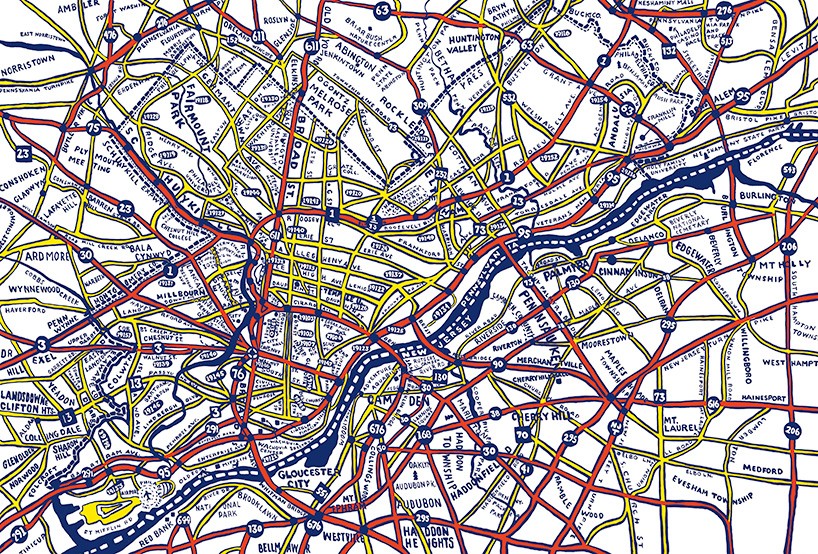 after the painting was vectorized, major thoroughfares were digitally colored red and yellow. rivers and type appear in blue

scher’s portions of the map comprised the floor (104 panels), while the remaining 154 panels were completed by students. there were actually more panels than student participants, so 21 pentagrammers—members of scher’s team and other staffers—jumped into the mix to finish the balance.

each panel was approximately 56″ by 42″ and was printed with a portion of scher’s original map. participants painted in their details with blue and white acrylic paint.

to create a cohesive environment and maintain a certain degree of consistency, the designers put together a set of guidelines for the students to follow that advised them on the scale of their strokes—highway brush strokes are wider than street strokes—and lettering. the participants were encouraged to use google maps to identify the landmarks and street-level detail of their area.

for the rug, scher completed a second painting that was 56” by 150 1/3” (approximately 4 2/3’ by 13’) and scaled up six times to almost the full size of the room (75’ by 28’). the painting was printed on a carpet—actually three long strips—and installed on the gallery floor – creating a seamless image. the small gaps between the walls and floor were color matched and filled in with acrylic paint. 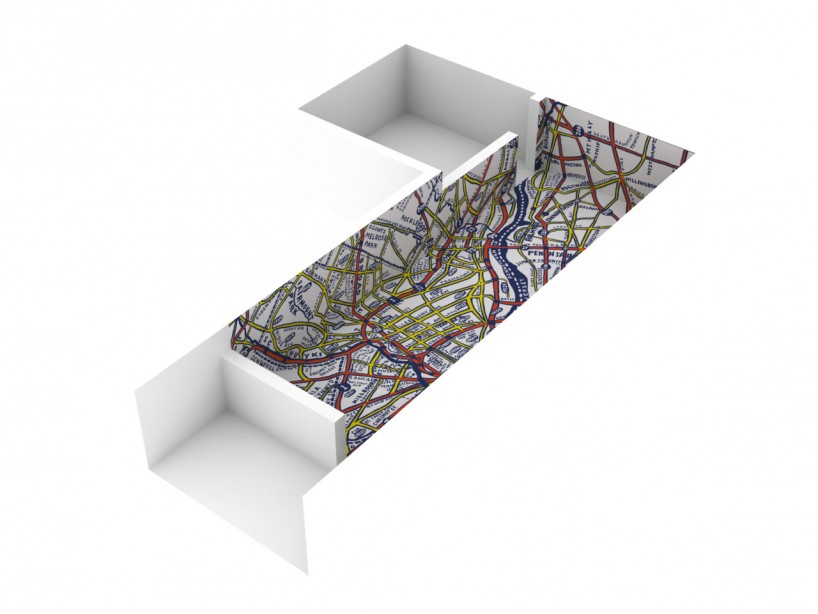 using dimensional modeling, the map was fitted to the gallery 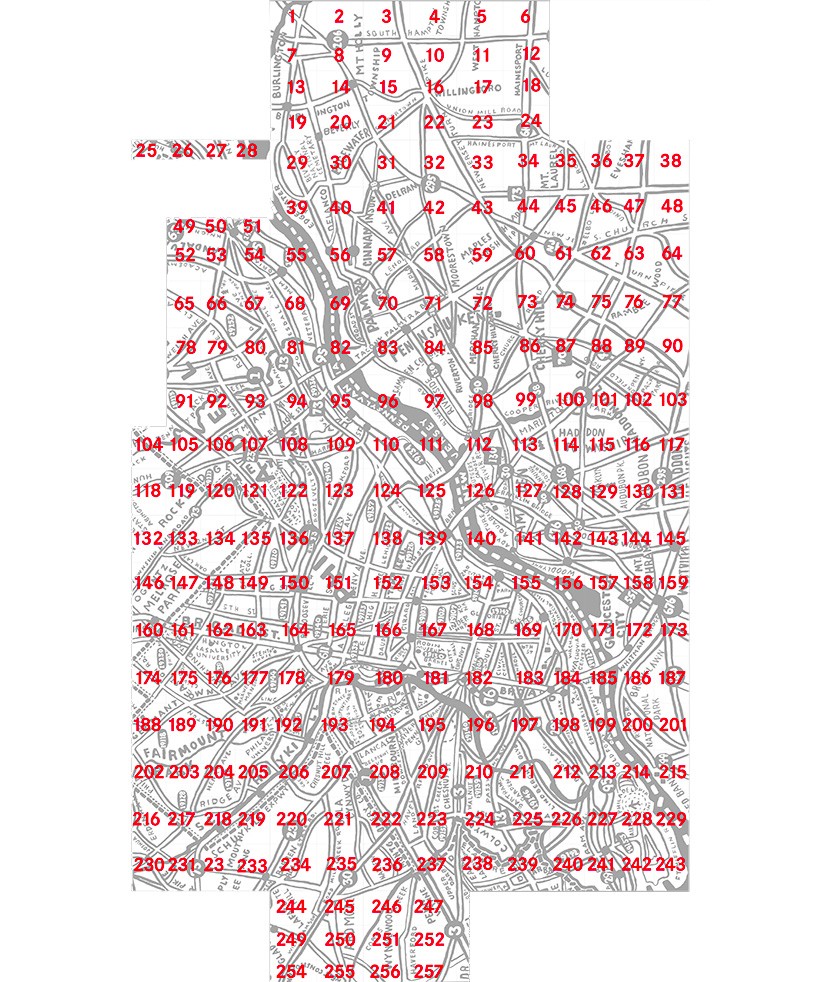 hartwig divided the map into a grid of numbered panels, seen here in a key that participants used to figure out where their piece was located in philadelphia. 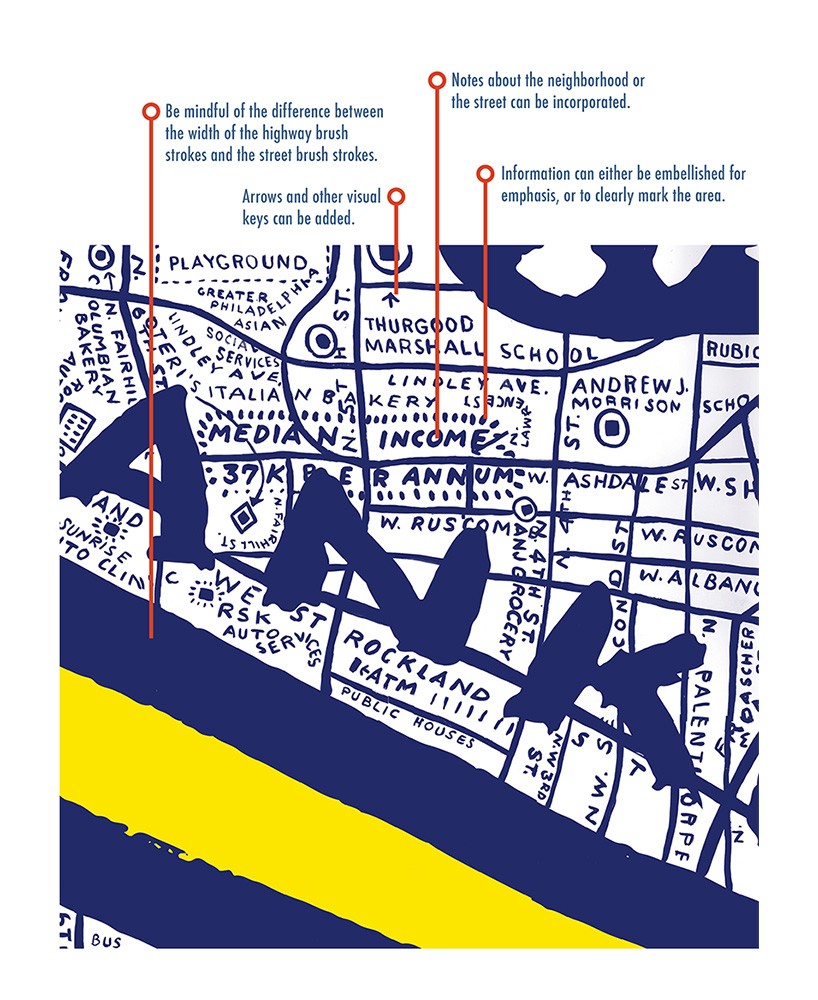 participants were given instructions on how to create their individual panels. 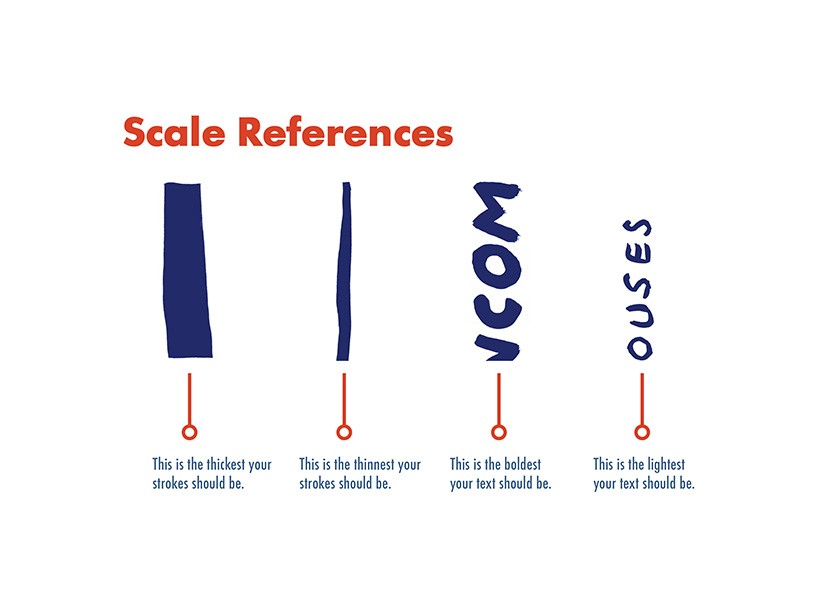 guidelines on stroke weights for participants. 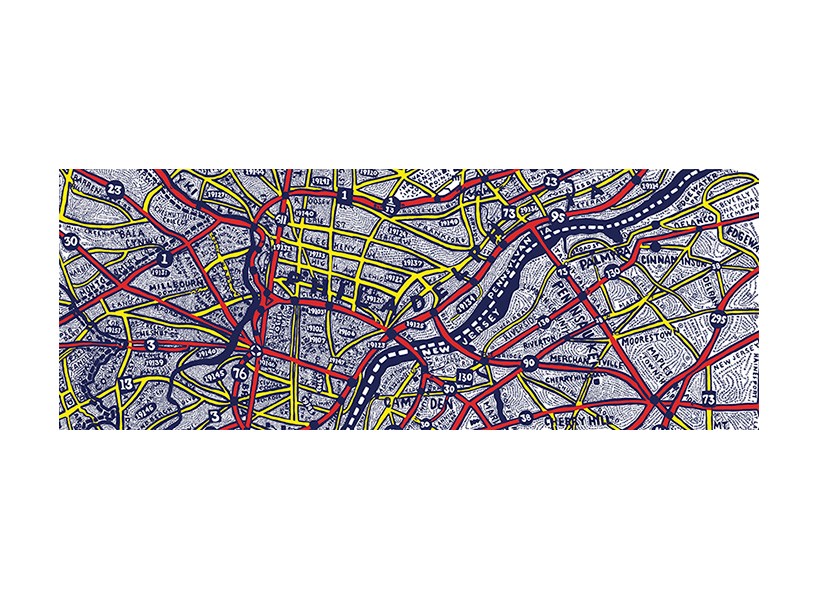 scher completed a second painting that filled in further detail in the portions of the map that would appear on the floor. this was then printed on a carpet. 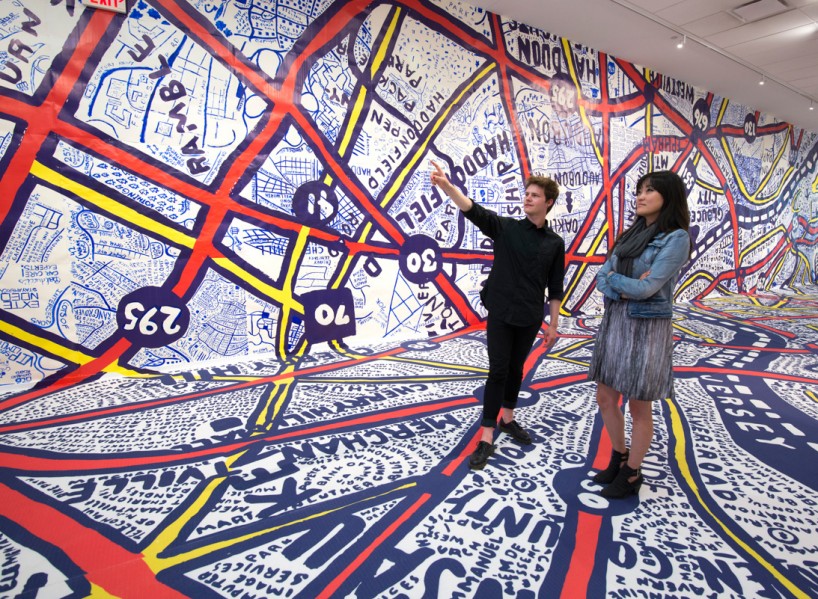 the space is anchored by the printed carpet. 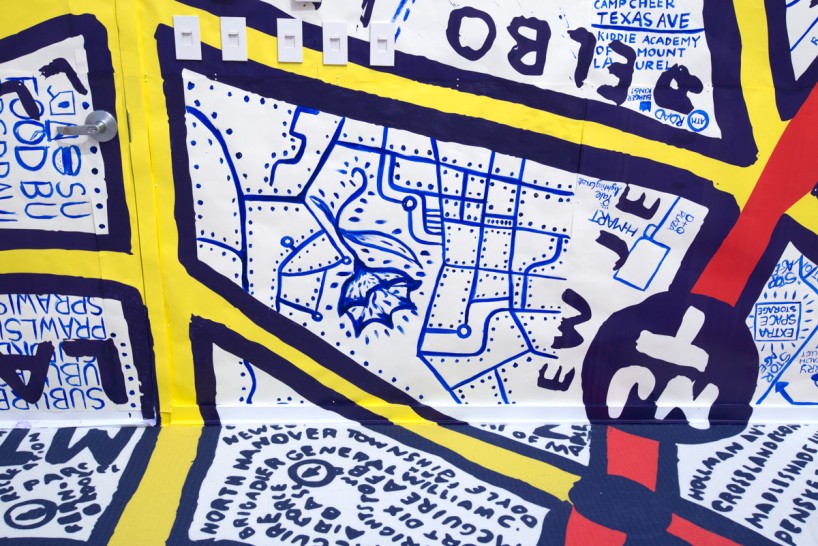 the gap between the walls and floor was painted to maintain the seamless environment. 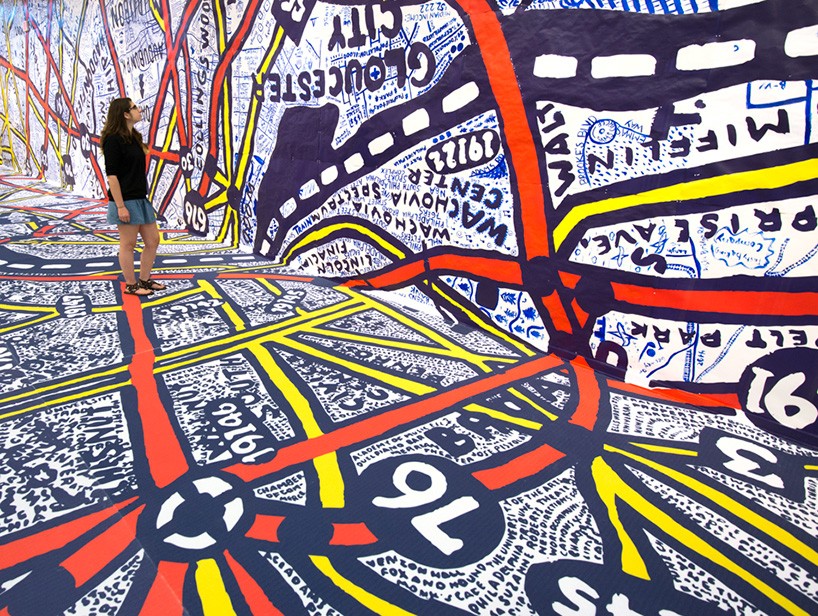 ‘philadelphia explained’ is can be viewed from now until july 17, 2015. 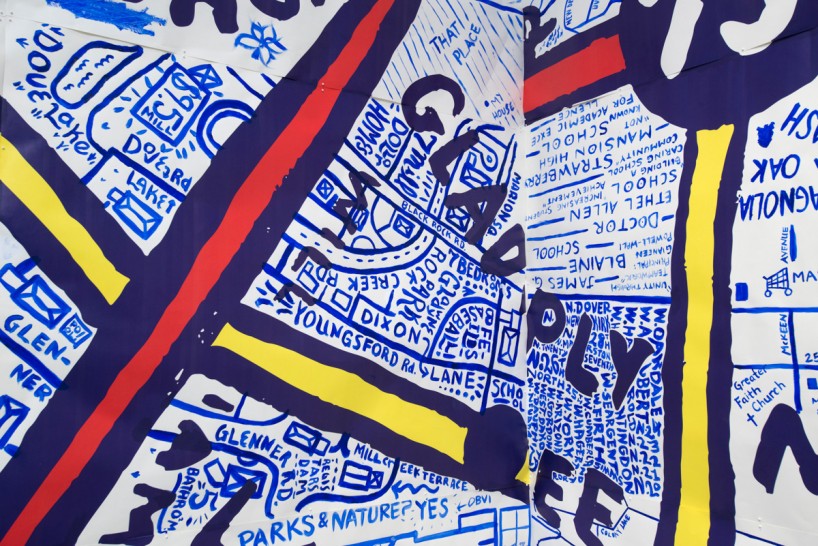 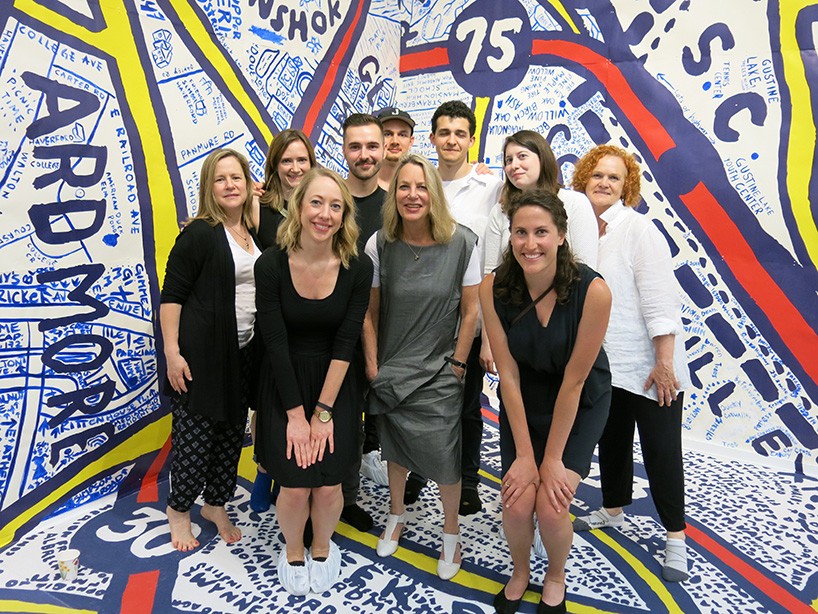 paula scher (center) and the team at pentagram who contributed to the project.

special thanks to: blick art materials, mega media concepts, and quaker chroma imaging for donation of materials and processes that allowed the exhibition to come together.