pentagram’s paula scher has designed a bold new identity for the philadelphia museum of art that’s both iconic and expressive, the logo customizes the letter ‘A’ in the word ‘Art’ to highlight the breadth of the museum’s remarkable collection. the new identity launched earlier this month with the unveiling of plans for a major renewal and expansion of the museum by the architect frank gehry.

one of the largest museums in the united states, the philadelphia museum of art has a world-class collection of more than 227,000 works and more than 200 galleries presenting painting, sculpture, works on paper, decorative arts, textiles, and architectural settings from asia, europe, latin america, and the united states. the museum’s greek revival-style main building is one of philadelphia’s great landmarks, and its 10-acre campus anchors the western end of the city’s benjamin franklin parkway.

gehry’s comprehensive plan reorganizes and expands the main building, adding more than 169,000 square feet of space and enabling the museum to display much more of its world-renowned collection. best known for the expressive sculptural forms of buildings such as the guggenheim museum in bilbao, gehry’s approach to the museum expansion is dramatically different and virtually unique. it focuses on the transformation of the interior of the main building through the renovation of existing spaces and the creation of new underground galleries. built behind the famous ‘rocky steps’ the renovation will not alter the existing façade. the project will proceed in several phases, with the first expected to be completed in the next five years and estimated to cost about $150 million.

scher worked closely with the museum to develop the new identity. philadelphians colloquially refer to the philadelphia museum of art as the ‘art museum’ and the new identity both brings art to the people and leads people to the art. ‘A’ stands for ‘Art’ in the new wordmark, which can be customized in certain instances with up to 200 different ‘A’s (and counting) that represent different styles of art and works in the collection, from pop-inspired graphic letterforms to sculptural and photographic interpretations. bringing an element of playfulness to the museum’s brand identity, the mark can be modified for specific exhibitions and collections, and is endlessly adaptable.

‘this first-rate museum needed an identity that is welcoming and inclusive, that leads the public to one of the broadest and best collections of art in the united states’ – paula scher.

horizontal version of the new logo 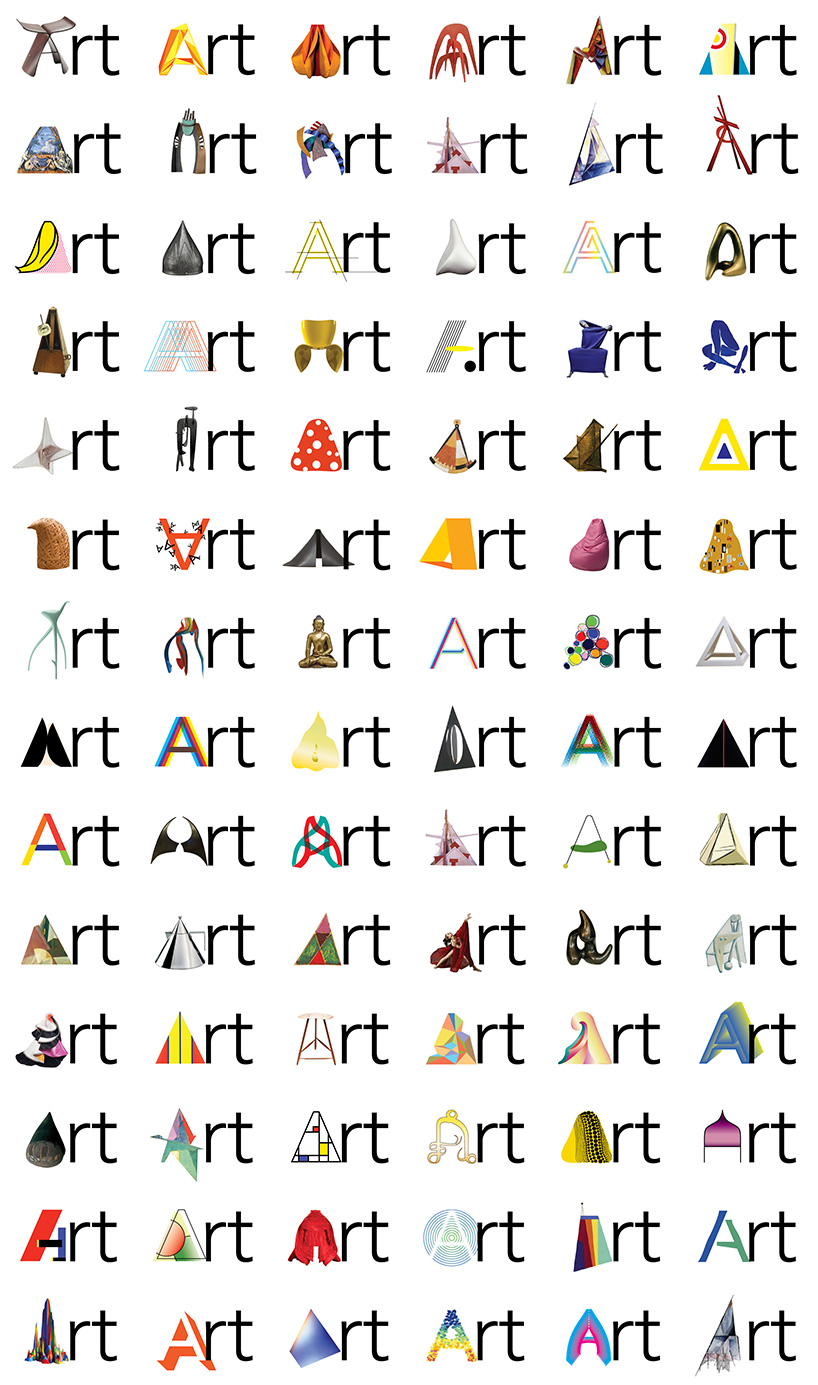 in certain instances, such as special exhibitions, retail, invitations, badges and tickets, special ‘A’s may be used to emphasize the breadth of art at the museum. a series of 200 ‘A’s were created representing different styles of art and works in the collection.

as the new expansion connects various sections of the museum, the new identity establishes a flexible branding system that ties together many different elements. scher was originally commissioned to design environmental graphics for the revitalization, but it soon became apparent that the museum also needed a new, contemporary identity that would both communicate its position as a world-class museum and provide a cohesive look and feel for its many programs and initiatives. the identity will be implemented in a comprehensive program of signage, wayfinding and environmental graphics for the expansion, as well as the museum’s publications program and website. 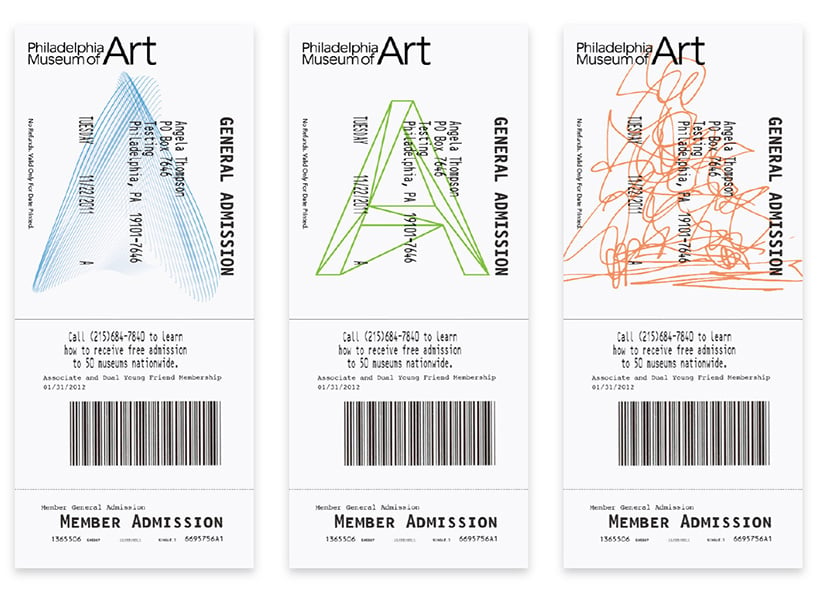 the new identity is set in the sans serif typeface avenir, which was also used in the existing identity. the font already appears on much of the museum’s signage and in publications and other communications. the implementation of the new identity on environmental graphics and other applications will be a long process—the program will roll out as construction continues over the coming decade—and it was advantageous to have the new system complement existing elements as work progresses. the designers customized avenir for the new logo, changing its weights to make it more contemporary.

the standard ‘A’ is used on all institutional materials, and can be used in a variety of color combinations depending on the artwork that it complements. the customized ‘A’ is used for special exhibitions and programs (like the frank gehry exhibition – see below), on tickets and admission buttons, and on retail items and other special promotions. 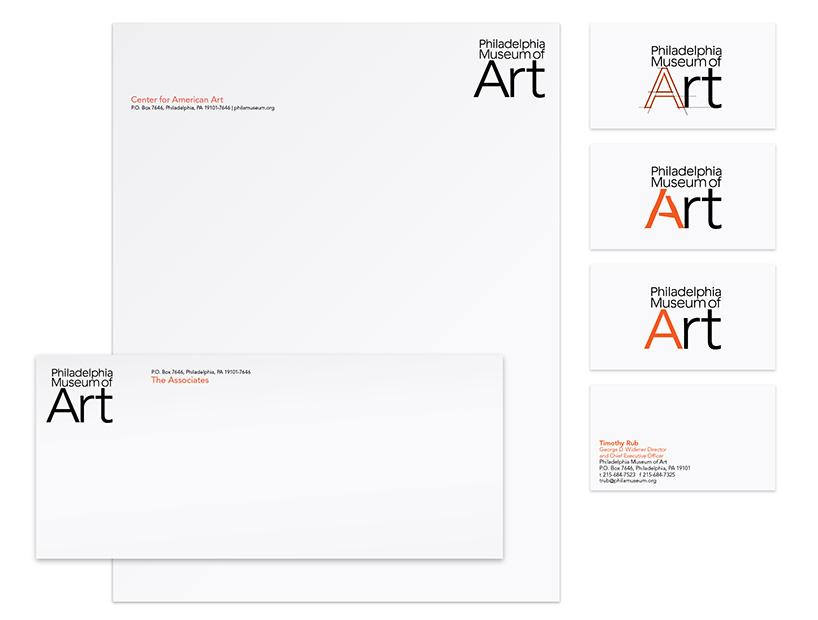 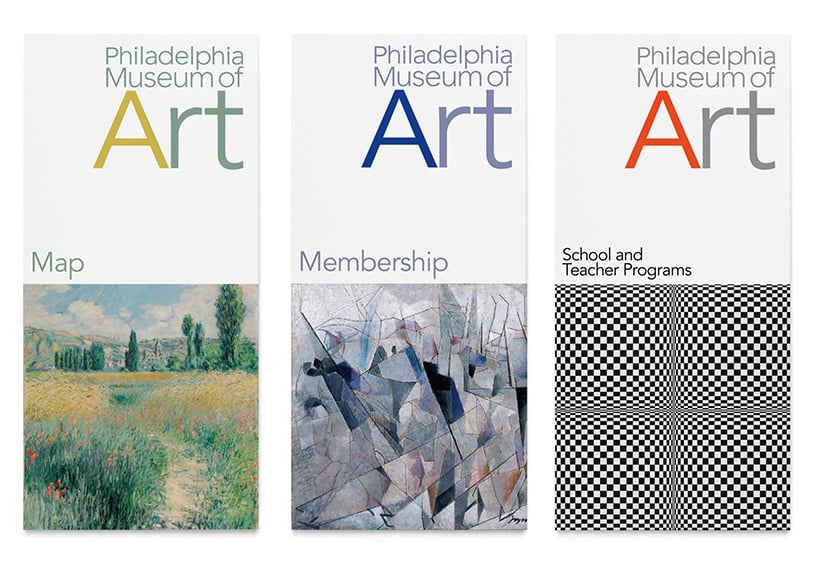 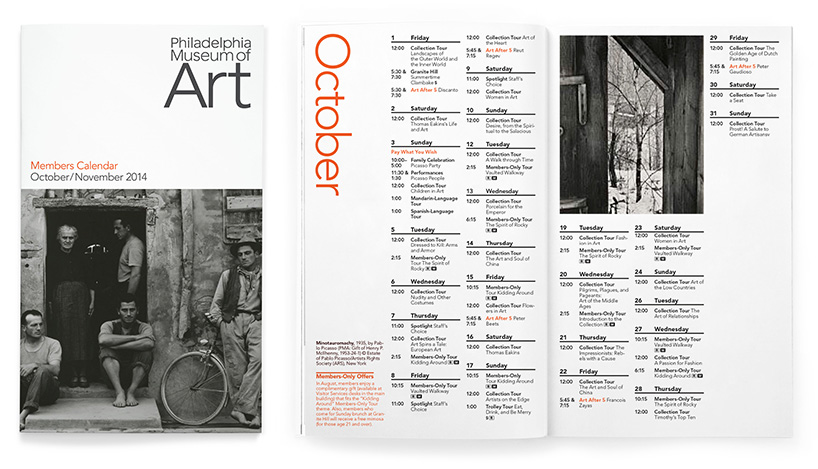 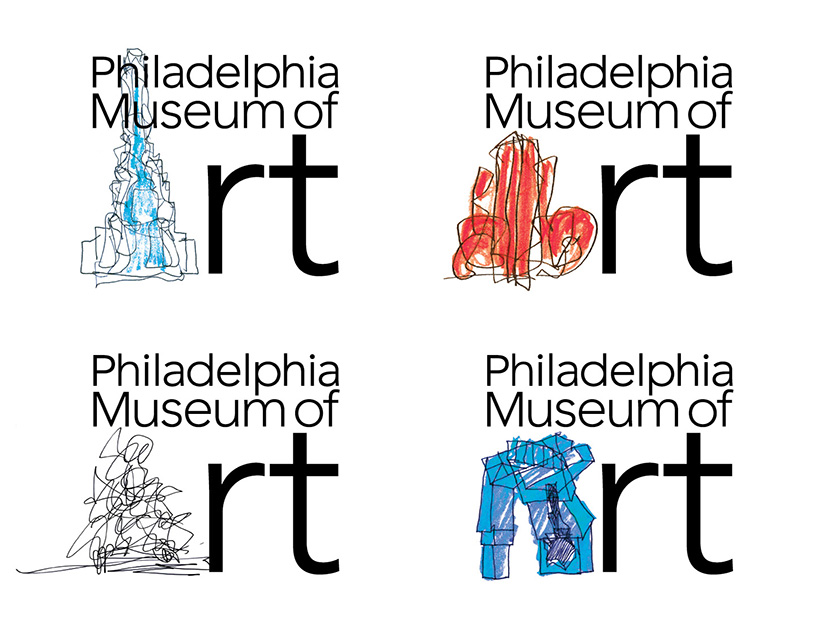 frank gehry created these special ‘A’s for his exhibition about the museum expansion.

the new identity launched with the graphics for the exhibition making a classic modern: frank gehry’s master plan for the philadelphia museum of art, that opened earlier this month. the exhibition displays large-scale architectural models, site plans, sections, and renderings for the expansion. gehry has created four sculptural ‘A’s that will be featured in the museum identity for the duration of the exhibition. 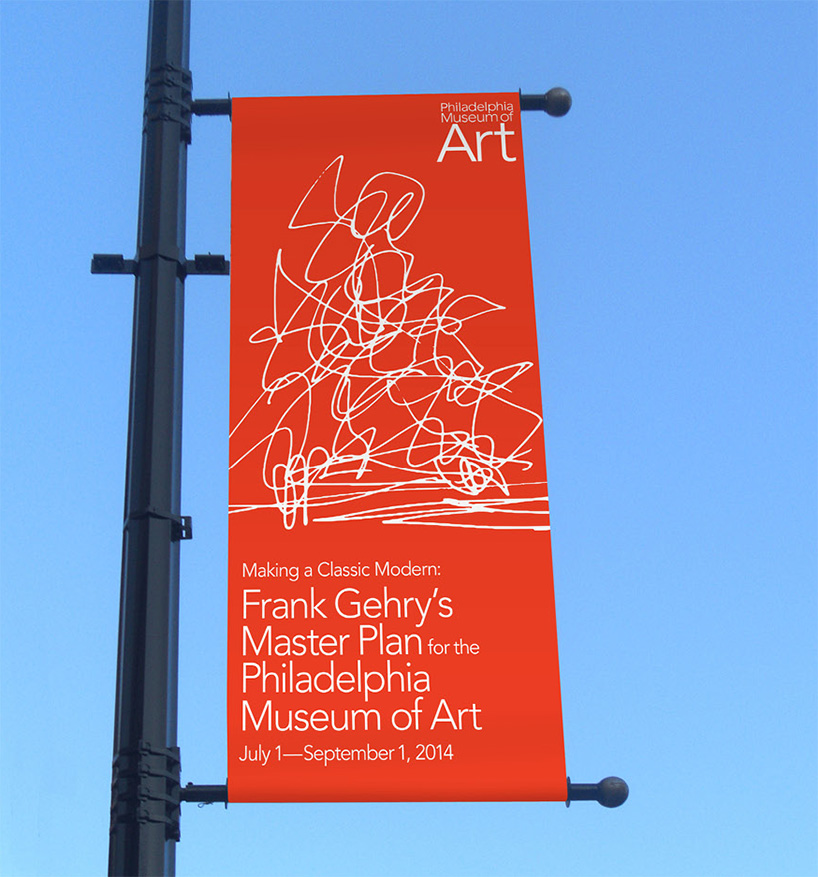 banner for the gehry exhibition. 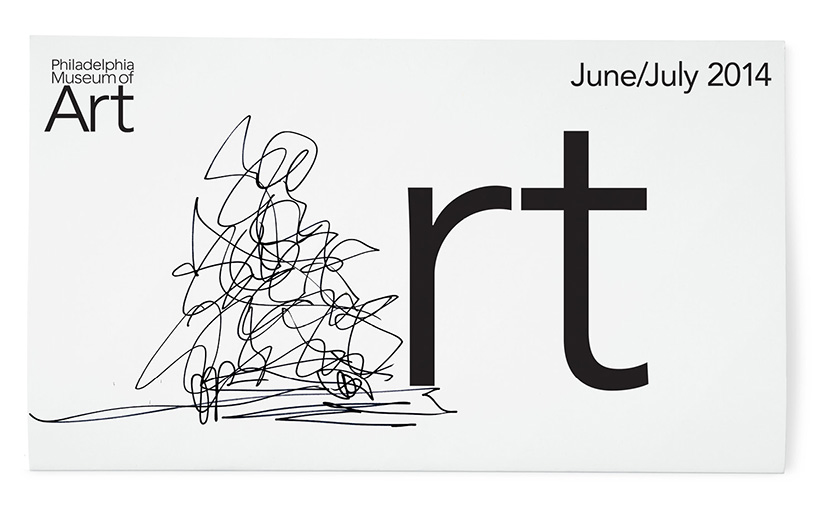 the philadelphia museum of art campus encompasses the landmark museum building on the benjamin franklin parkway, the ruth and raymond g. perelman building, located nearby on pennsylvania avenue, and the rodin museum, further east on the benjamin franklin parkway. in addition to improving interior wayfinding, scher’s program of environmental graphics will help create a recognizable district around the museum, linking the various sites and branding them as part of the institution. 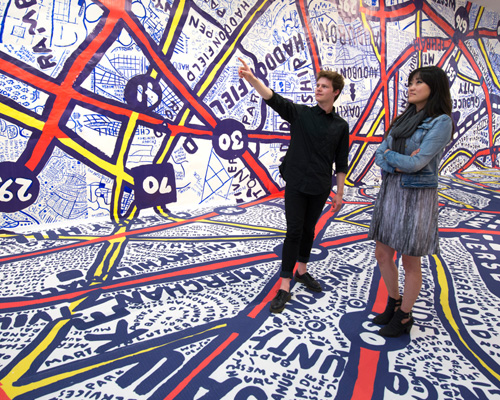