sheffield based street artist phlegm is throwing his weight into the fight to revitalize the area of yonge and st. clair in toronto, canada. the illustrator and muralist is best know for his collection of comics and charismatic graffiti presence, populated by long armed creatures with a penchant for the peculiar. now an internationally known artist, phlegm’s most recent work took an entire month to complete and is enormous in scale, covering the entire 12 storeys of the padulo building at 1 st. clair avenue. at first glance the mural appears to be of an enormous human figure, curled in an almost fetal position with its hands resting lightly on its knees. 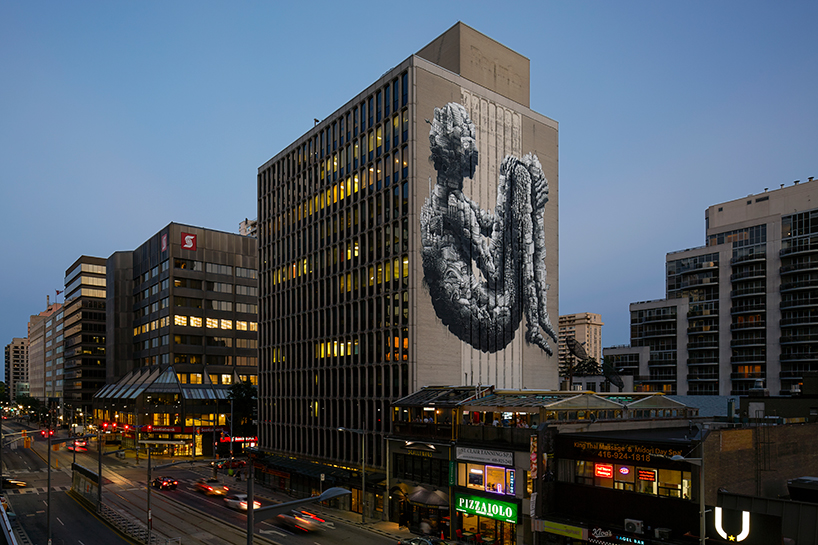 originally from sheffield, phlegm art can now be spotted in locations around the globe

upon closer inspection however, the giant-size human is made up of a myriad of houses, trees, bridges and buildings; a child of toronto, living in and born from the sights and sounds of the city. the toronto ravines are well represented with almost as many trees cropping up as houses, with other notable landmarks — such as the CN tower, the royal ontario museum, and st. lawrence market — making an appearance as well. the project is part of a wider attempt to revitalize the culturally neglected neighborhood of yonge and st. clair and was designed in conversation with the existing community of the area, incorporating locals’ suggestions into the new public landmark. weaving the feedback into the mural’s aesthetic, phlegm created a work authentically reflecting the neighborhood. 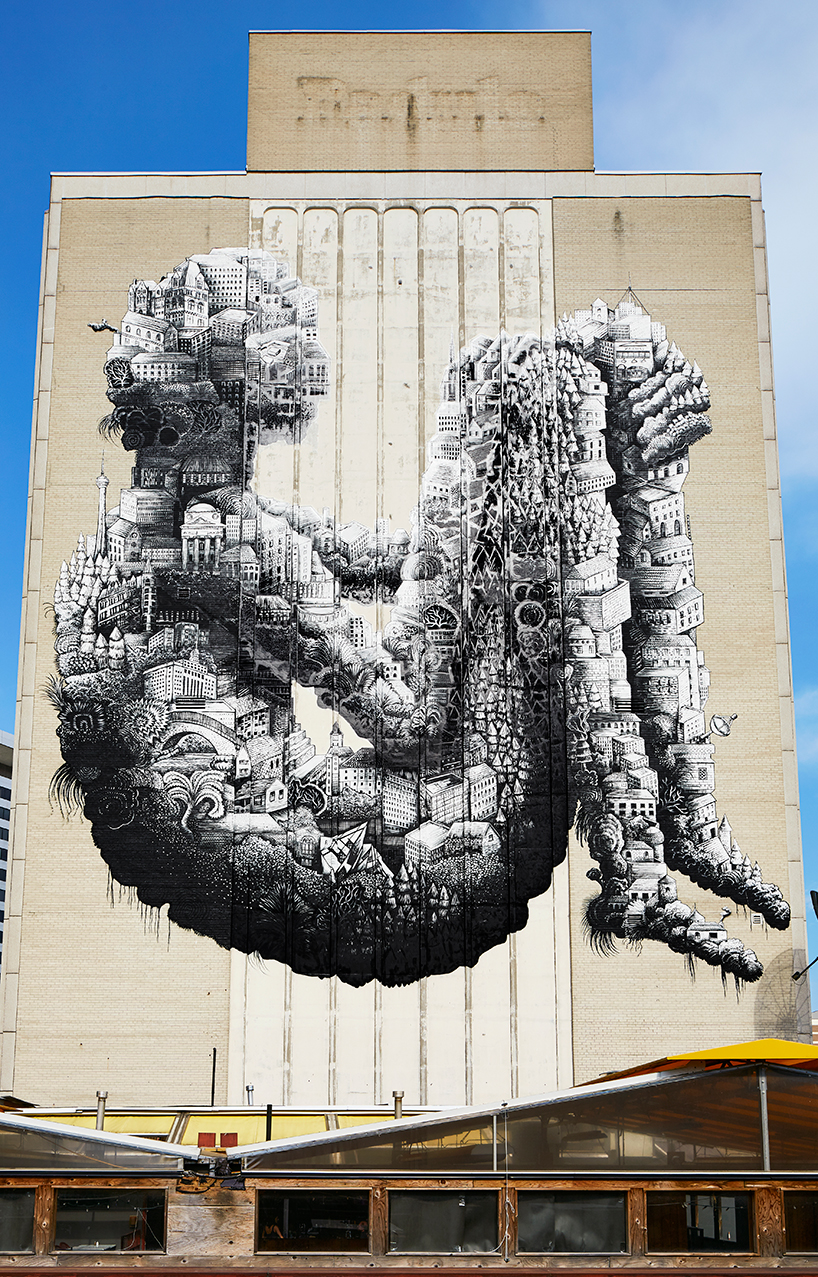 the figure is made of toronto landmarks — the CN tower, royal ontario museum, st. lawrence market and many ravines

the project was spearheaded by the STEPS initiative (a public arts organization) in collaboration with the city of toronto’s streetARToronto (StART) program.  SLATE, the asset management company that recently acquired all four corners of the yonge and st. clair intersection — as well four other buildings on the block — was the catalyst, providing the initiative with its vast urban canvas. ‘an important part of what we do at STEPS is produce public art in unlikely spaces,’ says STEPS founding director alexis kane-speer. ‘embracing the existing built forms of the city and challenging ideas around what constitutes cultural space is inherent to our approach. we see canvasses everywhere.’

the piece was completed using a scaffold and swing stage lowered over the side of the building, with painting taking place over two three-hour sessions a day. phlegm was aided in his work by assistant toronto muralist stephanie bellefleur. ‘I chose to work with the human form because it’s really what a city is,‘ states phlegm. ‘a city is really just a mark left by all those billions of people that added to it and made it what it is.‘ 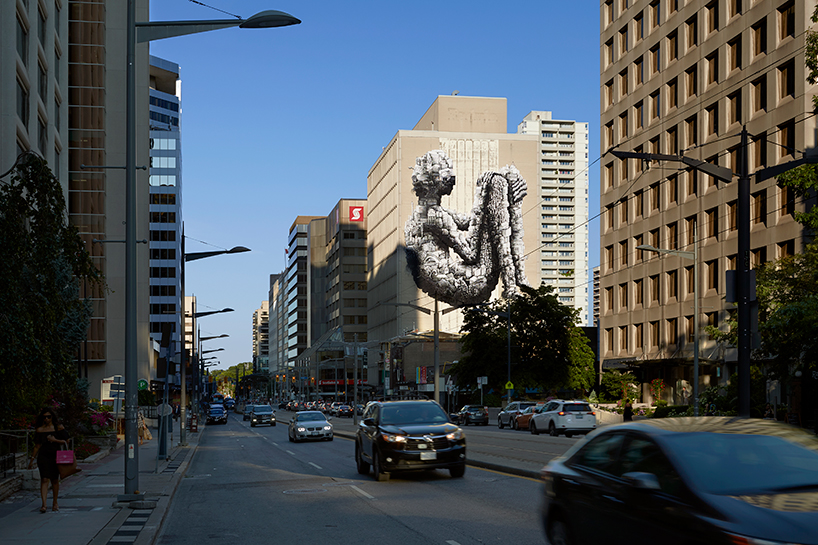 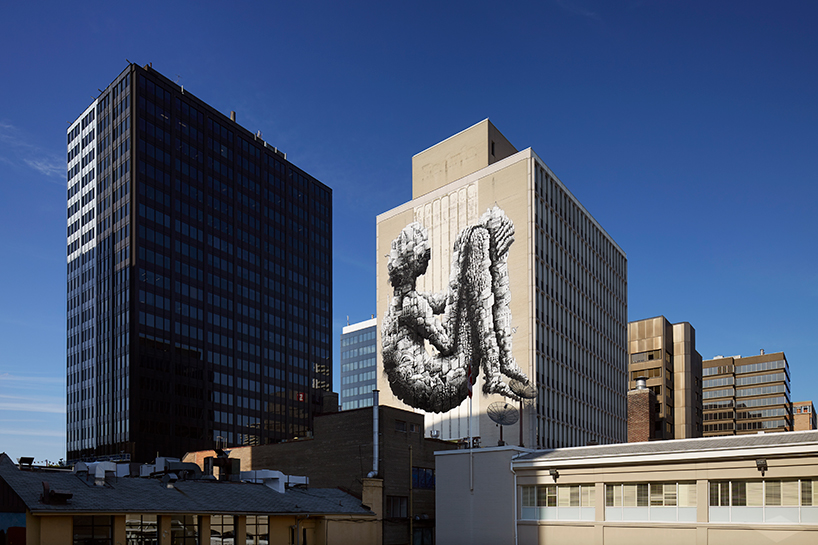 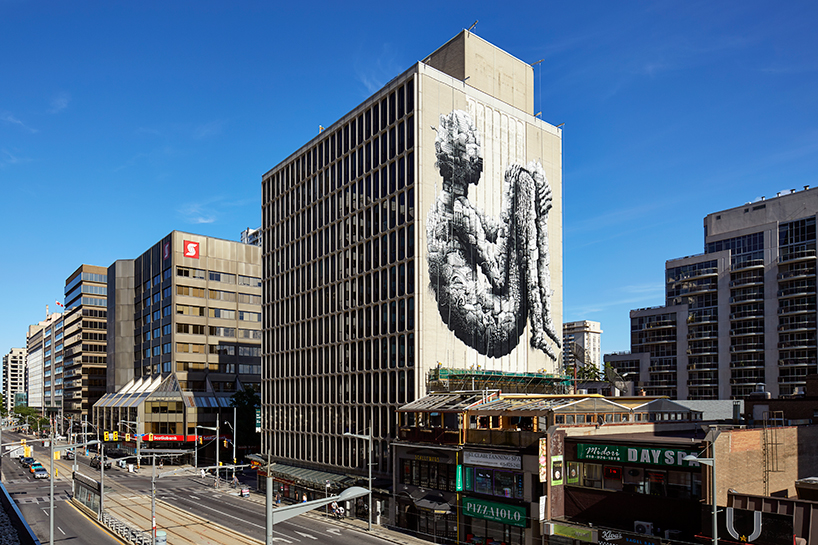 the image was designed in conversation with the yonge & st. clair community