what happened to the monument? the theme of this year’s international sculpture biennale of cararra is the ‘monument’, or rather the radical process of de-monumentalization which has freed sculpture from any celebratory, encomiastic function.

the monument is an emblem of power, a tool for controlling the masses and making them conform, but it is also a catalyst of national values and an irreplaceable piece in the jigsaw of collective memory. it has become one of the main targets in revolts and revolutions, wholly swept away when the ideas of democracy and freedom of our time took hold. however, in today’s changing scenario, in this atmosphere of fin-de-siècle and of the rewriting of history, alongside the predominant contemporary iconoclasm we can sense a gradual re-emergence of the codes and values of the past. will we again identify ourselves in new monuments?

the carrara territory of italy has always been connected with the quarrying and working of marble. it is where michelangelo and canova took up residence while they searched for the right material for their works, and has suffered more than others from the decline of traditional sculpture followed by the collapse of the 20th-century symbols and ideologies. the local context thus acts as a mirror for the cracks in the symbolic and productive system of the whole western world, and it is from a contemplation of this real situation that the guest artists of this edition of the biennale draw their influences.

the decision to involve the whole town of carrara, by issuing multiple exhibition sites (old sculpture laboratories and other abandoned buildings in the centre, where the signs of time and neglect are evident) further express the dimension of transition which is the leitmotif of the whole exhibition. it is perhaps easiest to find fertile territory for change where disorientation is most evident.

the dust of the long-abandoned venues constituted the background to the the theme of the exhibition: the transitoriness of the monument and therefore the questions regarding its future. the distinctive display of the historical works, eradicated from their original context of authoritarianisms and dictatorships in order to highlight how the fall of the ideologies to which they clung signifies also the fall of their presence in the world, is connected with the work of the 33 international contemporary artists, in full awareness of this dissolution. the section on the languages of architecture deals with the idea that it has taken over from sculpture in the monumentalization process, evidently still present in society. 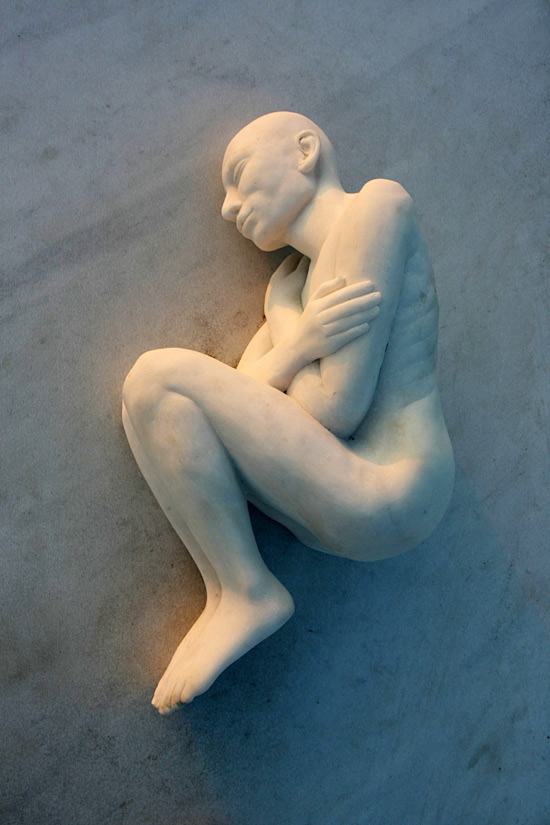 ‘I love simple things: poetry is my favourite form of art because it is simple, monochrome is simple, and I love the simplest white statues because they give me serenity‘. therefore, for the biennale of carrara, koh further elaborated on the theme, developing a sculpture which depicts him as a boy once again, curled up and in need of protection. located on the seashore – molo di ponente beach – the sculpture is expressed in simple, monochrome white marble. 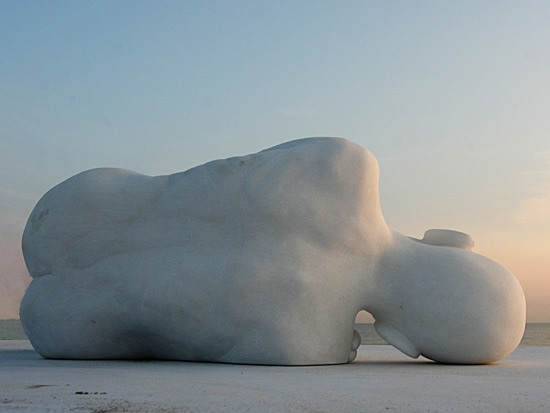 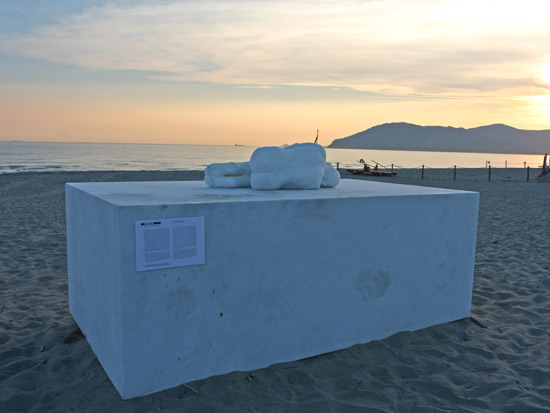 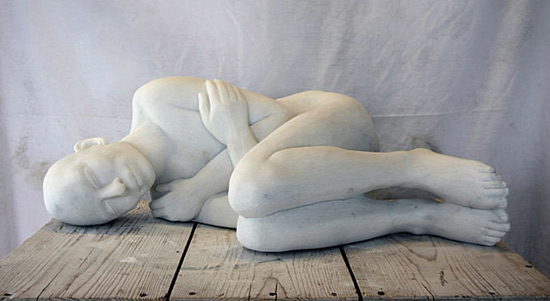 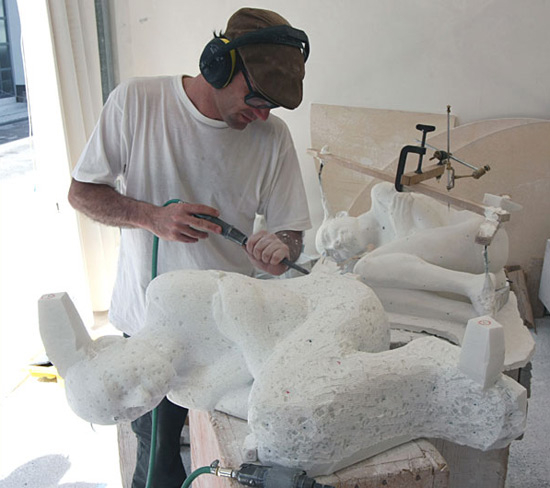 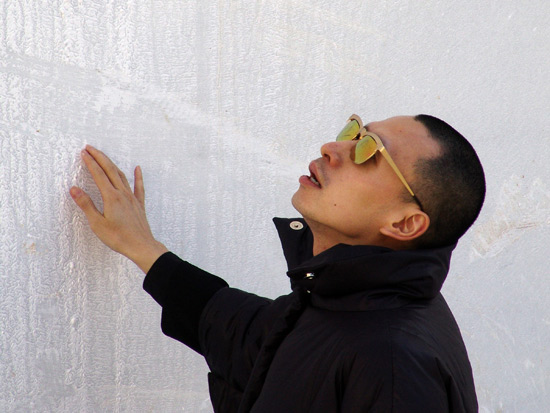 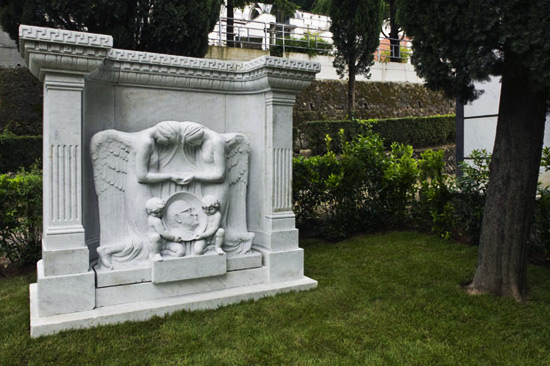 ‘untitled’ funeral monument by italian artist maurizio cattelan is an art nouveau-style sculpture dedicated to bettino craxi (a discredited italian prime minister who had a strong influence in the eighties).

cattelan’s work for the biennale began months prior to the inauguration. aware of the strong political identity of the carrara, cattelan saw the plaster for a sculpture of craxi in a laboratory. his idea was based on a logical subsititution: a marble statue of the socialist leader replacing the one dedicated to the italian icon giuseppe mazzini. it was the start of the typical cattelan case – a media event met with both favour and disapproval (e.g. via a group fighting to save mazzini on facebook and a republican meeting in carrara). regardless of the actual realization of the project revealing that the idea of the monument is still alive, in may the answer ‘no’ to the project came – for technical reasons – definitively putting an end to the possibility of seeing the work realized. however, in the end, cattelan was able to celebrate the death of his idea in the form of a liberty-style monument – two angles are depicted holding up a medal engraved with craxi’s profile – erected near the entrance of the monumental cemetery of marcognano. 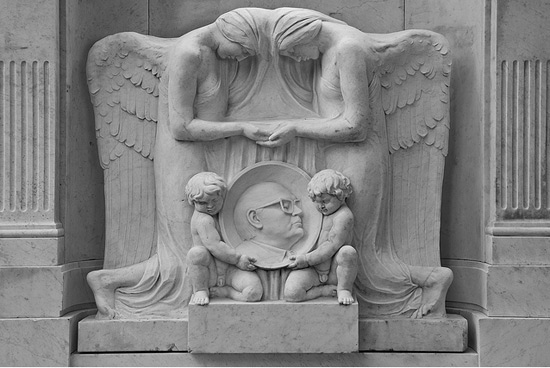 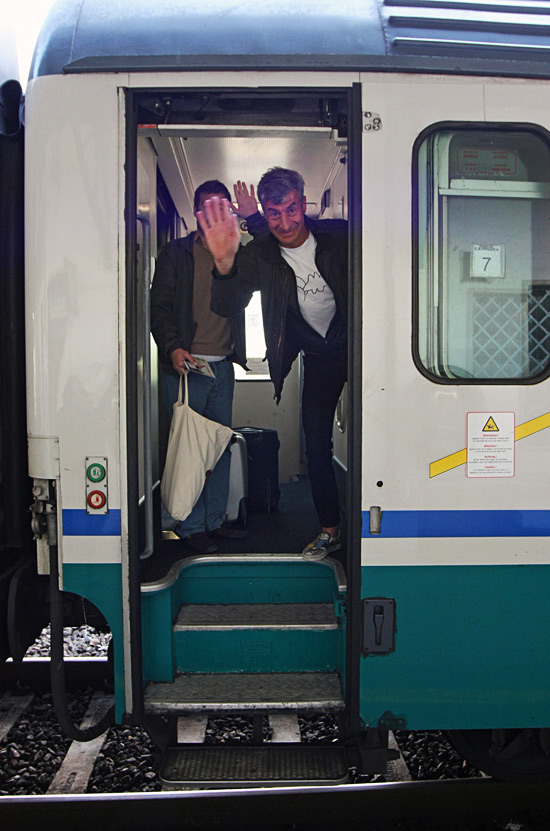 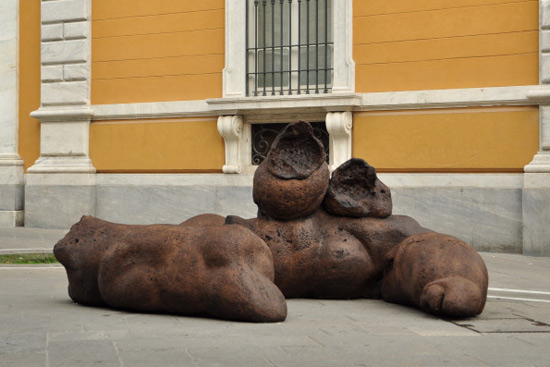 an irreverent artist obsessed with pop culture and the consumerism of american society, los angeles-based artist paul mccarthy discovered for the first time, on the occasion of the biennale, the potential of stone. creating the work ‘shit’, mccarthy’s sculpture is made from 15 tons of nut travertine and measures 3.60 metres long, almost the same in width and stands over 1 metre high, a huge mass in the shape of a turd. his choices, from the celebratory gigantification of the proportions, to the central positioning of the sculpture in the public space of piazza gramsci, mimick the old and recent canonical monuments which are present in carrara as elsewhere. everything is perfect except the subject, which is revealed by its unmistakable shape and the dark hues of the travertine stone. 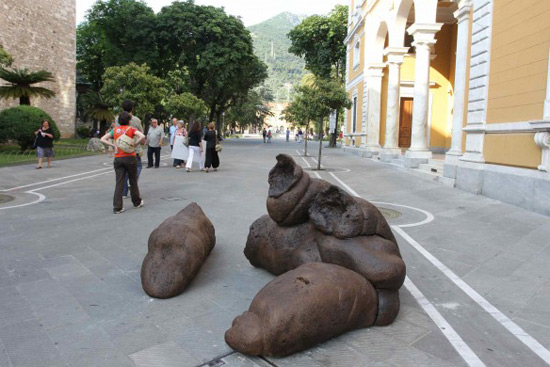 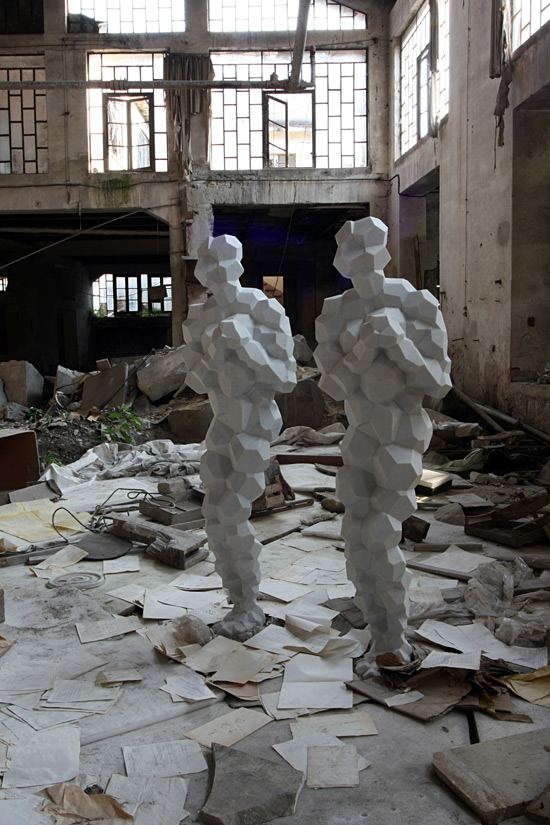 british sculptor antony gormley on his contribution ‘2×2’ to the biennale:

‘I first came to carrara in 1979 and made a few very small works in marble in saturnia, tuscany. I was amazed by the scale and beauty of the mountains and how they were cut by wires, and by the interface between the cuts’ absolute geometry and the chaos of the mountains. when arriving in carrara it’s possi­ble to mistake the marble for snow. the quarries are a primary carving, making space where there was mass. the work is cal­led ‘2×2’ and is a response to the demise of the workshops that I was shown which formerly produced funerary monuments and reproduction carvings in great quantities in the 19th and first half of 20th centuries, providing employment and community in the region; a practice which continues, but in a very diffe­rent way. my idea was to exploit the advances we have made in digital design and make a work with the minimum amount of hand work, where coordinates were directly transmitted elec­tronically to five axis routers working at the finest resolution. the work tests the evolution of art in the time of mechanical reproduction, translating bone, skin and muscle into a crystal­line packing geometry that is not dissimilar to the structure of marble itself. this is my conceit; to make a body image that in some way refers both to the great tradition of the naked body in art but also reflects our new understanding of the suboptical properties of matter. these nesting polyhedra are found both in foams and in the quasi-crystals that are the microscopic con­dition of the calcium carbonate that makes up the metamorphic rock structure of carrara marble. In making two figures for a 3 dimensional stereometry the aim is to emphasise both the lack of uniqueness and the relation between the virtual and the real.’ 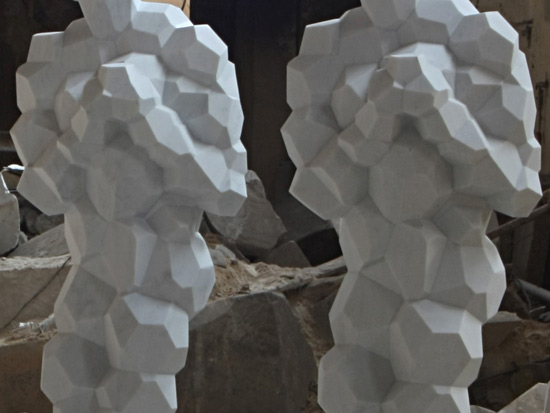 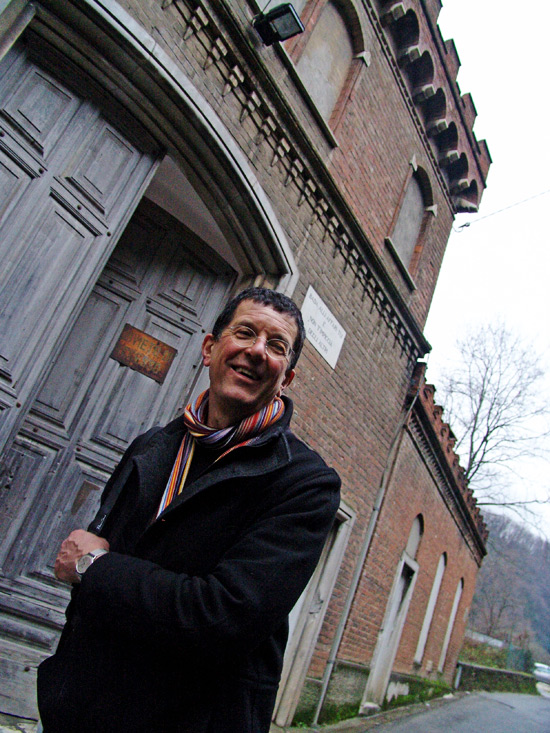 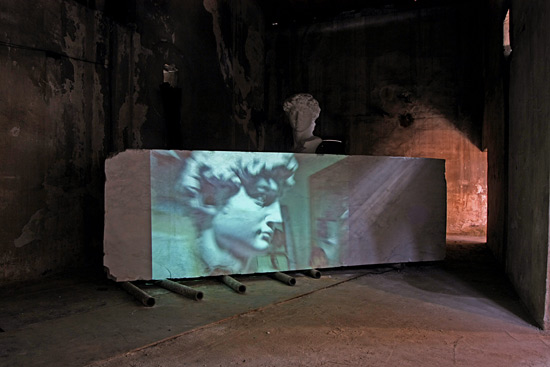 the work realized by chinese-born new york-based artist cai guo-qiang represents a new element in his research of unification between east and west. ‘one thousand youngsters drawing david’, consists of a large marble black which measures 620 x 200 x 140 cm, with a plaster reproduction of michelangelo’s david’s bust and a video projection. within the cave michelangelo, the primordiality of the block of marble from the apuan alps, from which michelangelo extracted his david, meets the emulative manuality of beijing academy students drawing reproductions of the famous sculpture. it is almost as if to say, having gone through centuries and having been expressed in millions of forms, the fetish-sculpture of the florentine master finally returns to the mountains from which it was born – but this time made in china. 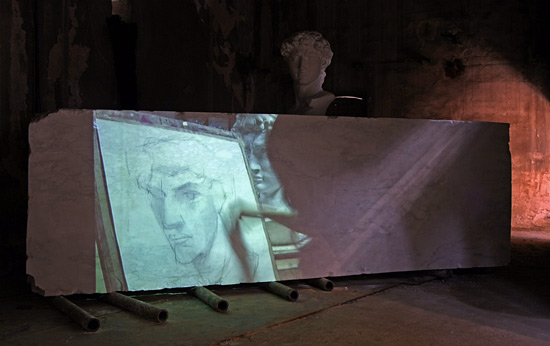 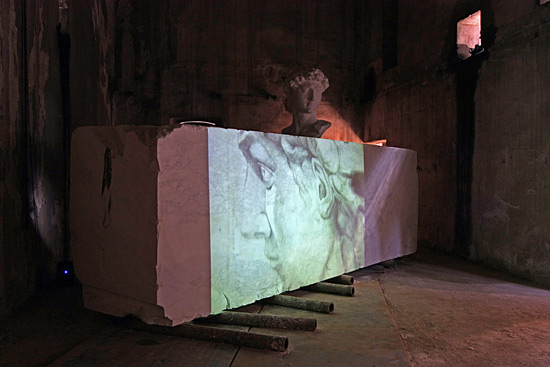 a clip of the video projection from ‘one thousand youngsters drawing david’: 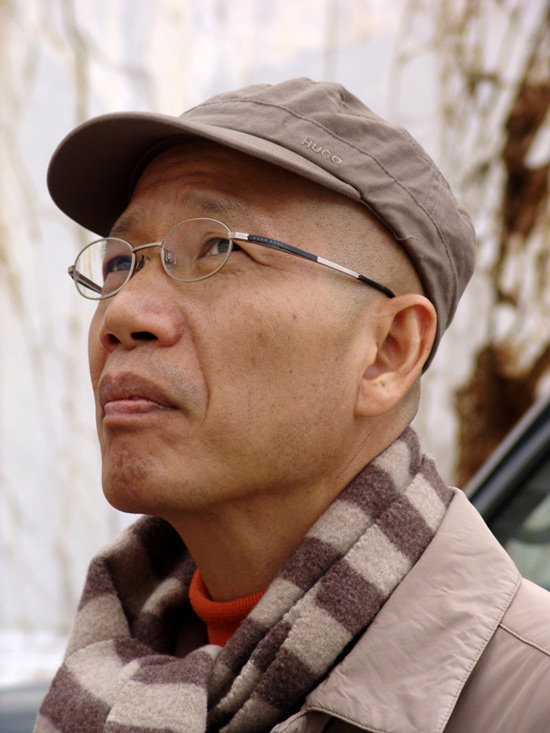 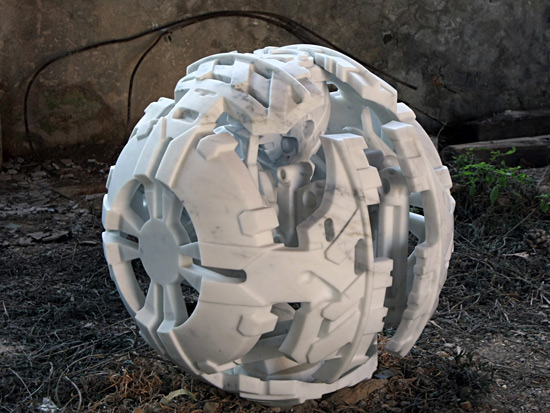 mexican-born berlin-based artist damián ortega declares that he wishes to set off ‘a malicious process of transformation and dysfunction of real things’ through the use of optical illusions, recycled material and the creation of a short circuit of space / time suspension. his work ‘l’uovo’ (the egg) is a reinterpretation in marble of one of the well-known ‘transformers’ – the japanese robots of eighties’ comic strips and cartoons.

at first glance ‘l’uovo’ reminds us of arnaldo pomodoro’s spheres, but a careful second look reveals the face of the robot within, ready to hatch inside it, alluding to the impetuous force of life. the sculpture is a reflection on the future. it was created with a robot which uses a modern 3D software, capable of reproducing all kinds of objects in stones, and looks like a mechanical embryo. if ‘l’uovo’ could hatch, take shape and stand up, we would be looking at a machine similar to umberto boccioni’s ‘forme uniche della continuità dello spazio’ (unique forms in the continuity of space). 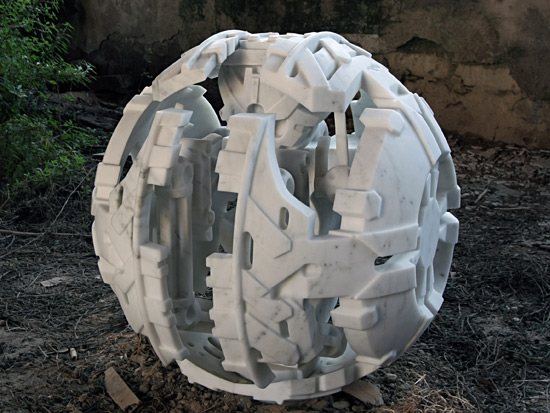 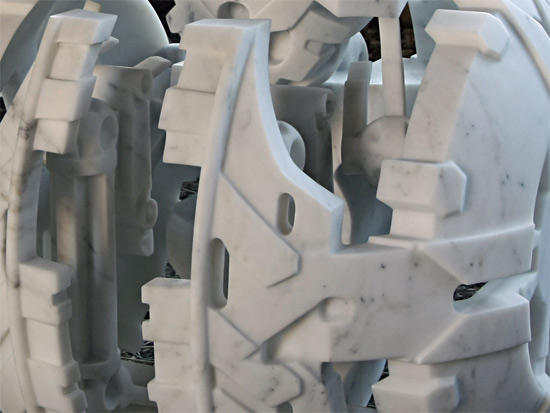 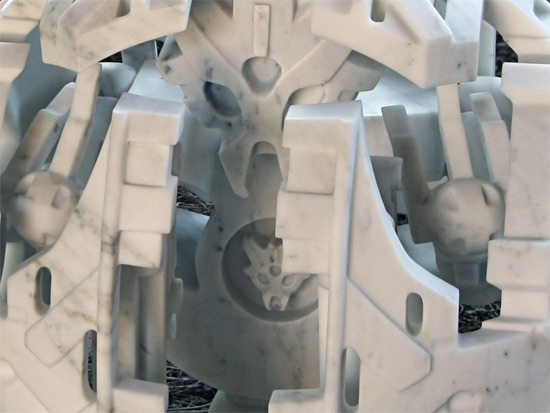 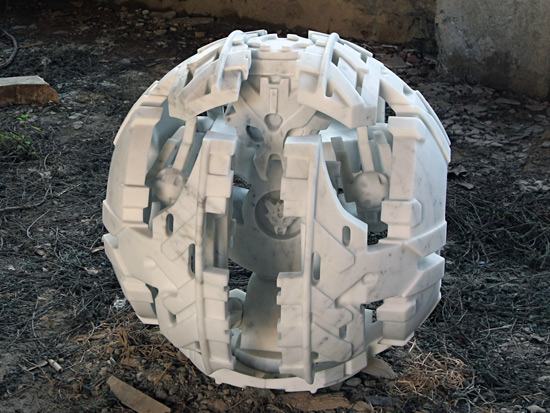 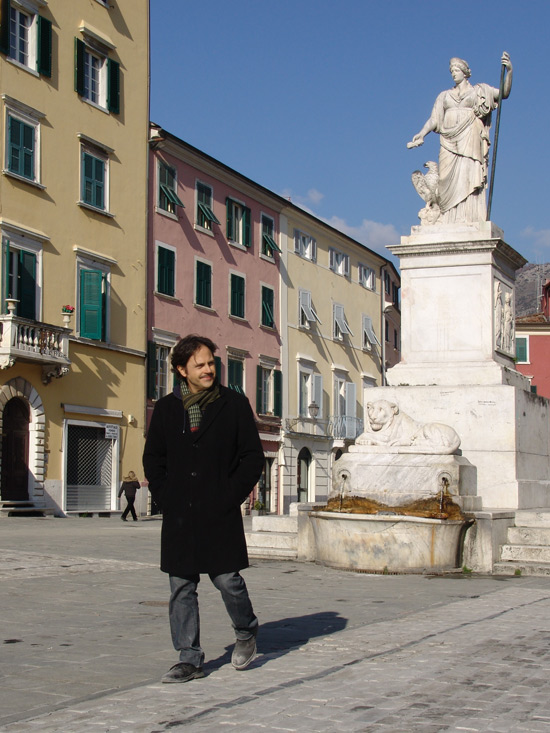