the mysterious venus of willendorf

according to a new study by the university of vienna, the 30,000-year-old venus figurine discovered near the village of willendorf, in austria, was likely carved from ‘oolite’ — a rock which is found neither in nor around the region. a research team led by anthropologist gerhard weber and geologists alexander lukeneder and mathias harzhauser, as well as prehistorian walpurga antl-weiser has employed the help of high-resolution tomographic images to learn that the material from which the statuette was carved comes from northern italy. this new piece of information sheds light on the archaeological mystery of the long-unknown origins of the venus which is one of the most important examples of early art in europe.

excavated in 1908, the venus of willendorf is an instantly recognizable figurine with an 11 cm long body. it has no face or feet, but physical characteristics that are typically associated with female fertility: exaggerated breasts and private parts. the iconic piece is completed with an intricate headdress or hairstyle. 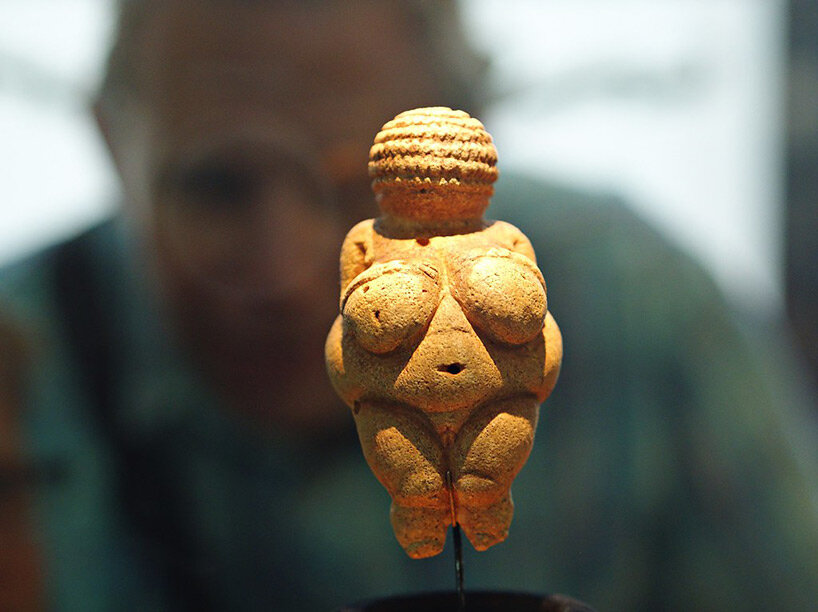 the original venus of willendorf on display at the natural history museum, vienna

examining the iconic statuette from the inside

before the study by the university of vienna (find more here), the miniature statue had only been examined from the outside. more than 100 years later, gerhard weber has used a new method to examine the interior of the figurine: micro-computed tomography. in this way, the team has obtained images with a resolution of up to 11.5 micrometers, a quality that is otherwise observed only under a microscope. recalling the interior examination, the anthropologist shares that ‘venus does not look uniform at all on the inside’, a special property that could be used to determine its origin.

along with the two geologists alexander lukeneder and mathias harzhauser from the natural history museum in vienna (find more here), who had experience in working with oolites, the scientists have acquired samples from austria and other parts of europe in order to evaluate and compare them. 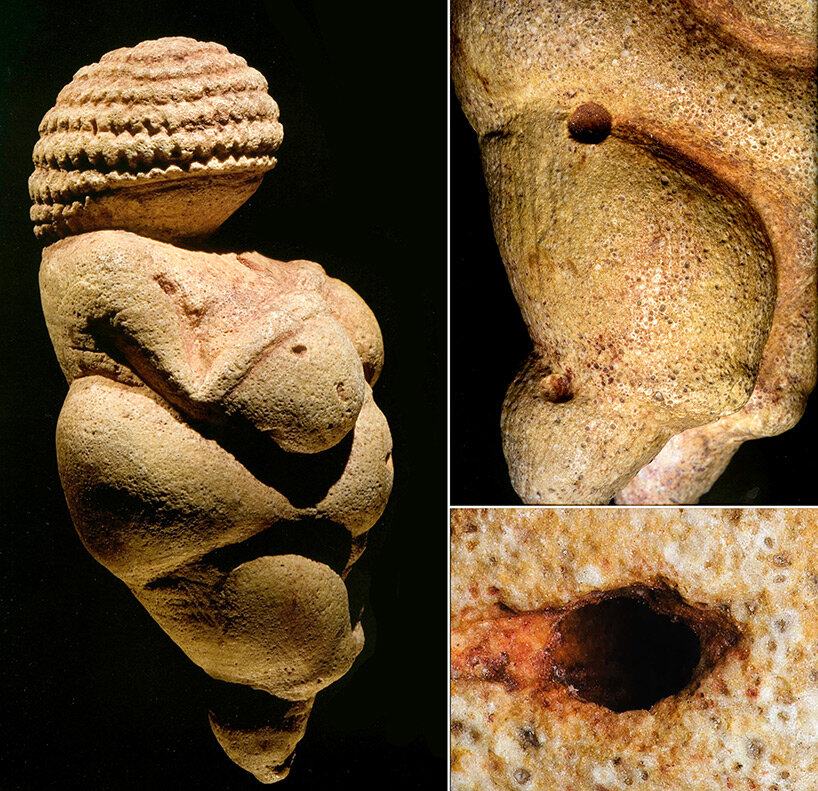 the tomographic data has shown that the internal structure of the stone is not uniform, as it contains layers of sediment with different densities and sizes. it also contains small remnants of shells, as well as larger grains called limonites. weber explains that the mysterious hemispherical cavities on the surface of venus were probably formed when the hard limonites broke away while its creator was carving it. ‘in the case of the venus navel, [the creator] then apparently made it a virtue out of necessity’ he adds.

in their research, the scientists have also identified a tiny shell remnant, just 2.5 millimeters long, and dated it to the jurassic period. this ruled out all other potential deposits of the rock from the much later miocene geological era, such as those in the nearby vienna basin. 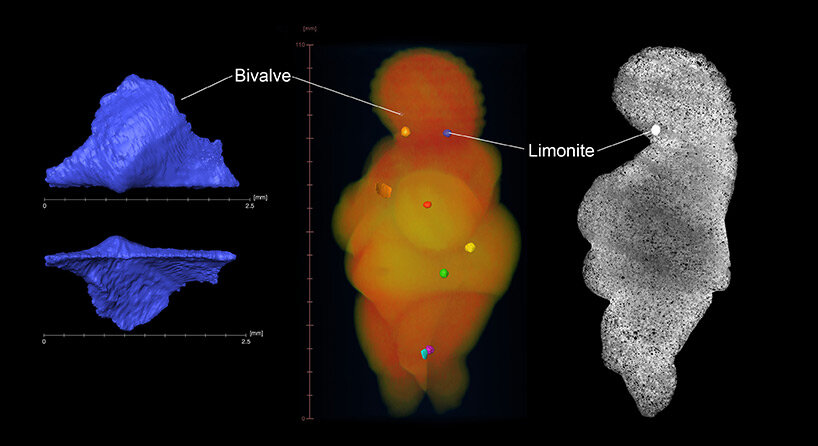 pictures derived from micro-computed tomography scans of the venus

traced back to northern italy

the research team analyzed thousands of grains with image processing programs or even manually. surprisingly, none of the samples within a 200 km radius of willendorf matched. eventually, the analysis showed that the samples from the venus were statistically indistinguishable from similar samples acquired from a location near lake garda in northern italy. this is a very significant conclusion because it means that the venus (or at least its material) started a journey from south of the alps to the danube north of the alps.

the statistics clearly point to northern italy as the origin of the venus oolite. however, researchers are also open to the possibility that the rock may have originated from eastern ukraine, located some 1,600 kilometers from willendorf. the samples there do not fit as clearly as those from italy, but better than all the rest of the sample. therefore, it’s a possibility that can’t be entirely ruled out. 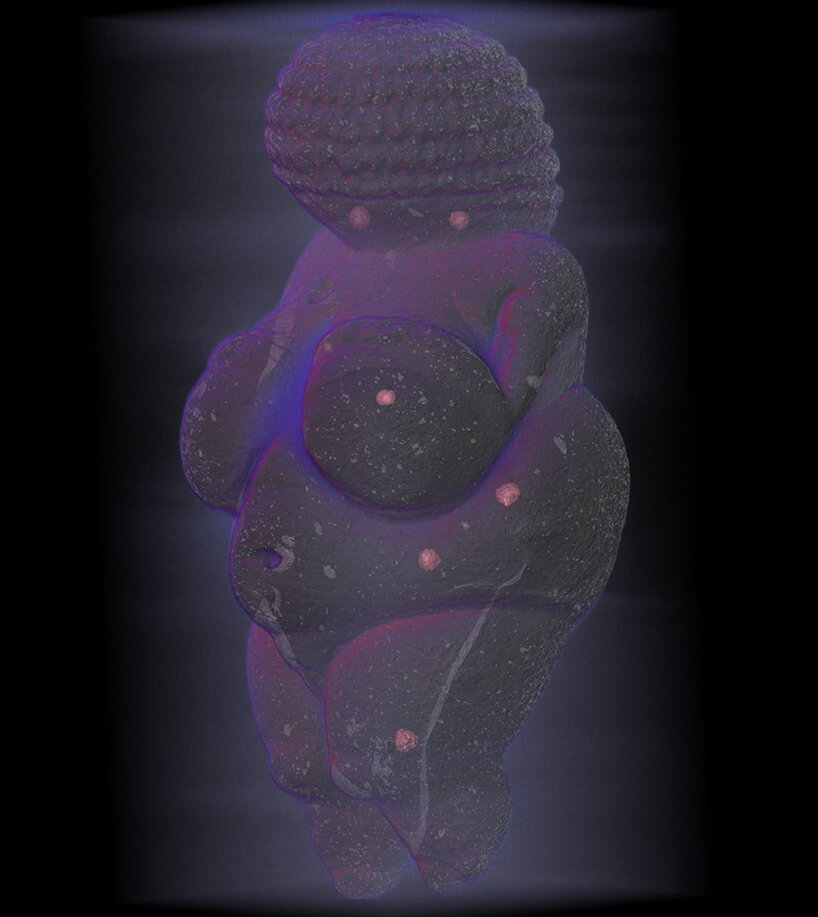