barcelona-based art collective reskate studio completed their 2019 would tour with three large scale glow-in-the-dark public art projects — ‘connectivity’ in china, ‘domestication’ in austria, and ‘the peace of belmonte’ in portugal. the street art murals are a continuation of the studio’s on-going ‘harreman’ series that aims to ‘light up dark corners of cities’ and spark conversation between the audience and the artwork on local issues. 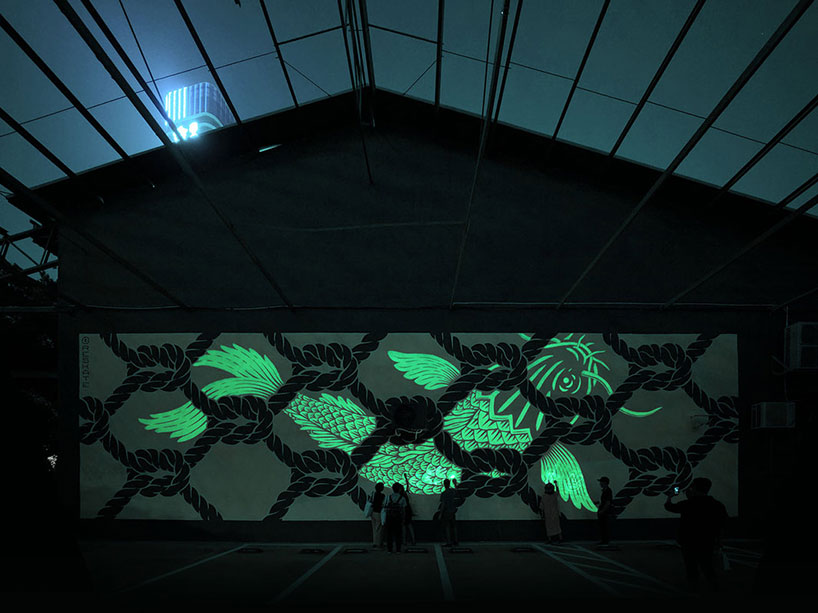 ‘connectivity’ 2019 | all images by reskate studio

‘through the use of lights, the observer becomes an active participant; interacting with the work and creating its response to those actions,’ explains reskate studio.

at night, each of site-specific murals illuminate a hidden illustration, painted with a photo-luminescent medium, which provides a new perspective into the neighborhood. with the help of community art centers, reskate studio was able to gain insight on the different cultures and curate appropriate messages behind the artworks. 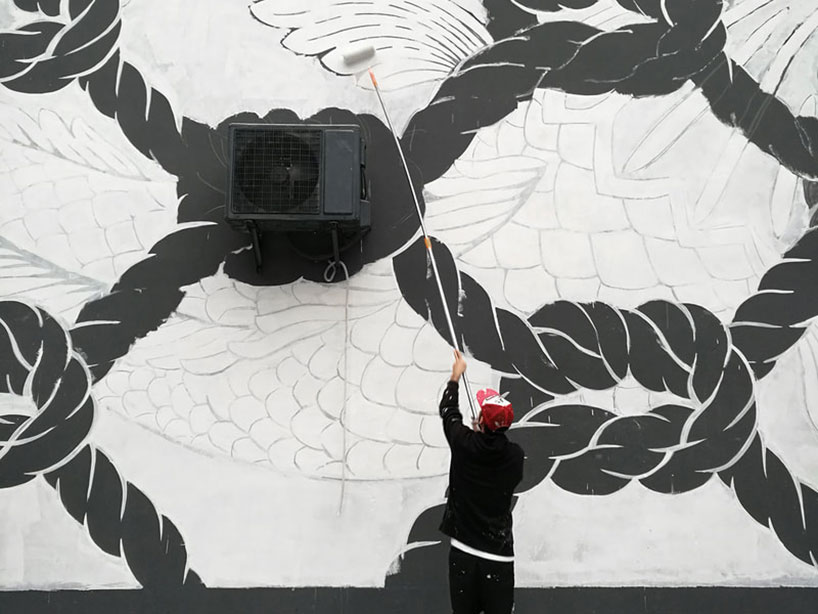 located at a public parking lot in shenzhen, china, ‘connectivity’ underlines the exponential growth of the community that was once a small fishing village of 30,000 residents. in a matter of a decade, shenzhen is now the flagship of the mobile phone industry housing up to 12 million residents. reskate studio illustrates rope knots as its base layer to question the role of the social network — a tool that connects civilians but also risks individual privacy. the hidden koi fish invites locals to look back to a certain time period when social networks were not as prevalent.

painted on the wien museum in vienna, austria, ‘domestication’ captures the community’s appreciation for their native dog breed, tiroler bracke. known for its natural predatory instinct to hunt wild foxes, the hound has always been taken advantage of by humans throughout history. at night, the silhouette of the dog unveils two foxes fighting one another.

dedicated to the jewish people that still reside in the small town of belmonte, portugal, ‘the peace of belmonte’ celebrates the integrity of the community during the portuguese inquisition. for five centuries, the jewish community had to live with their customs in hiding. at night, the illustration of the tree root can be seen transforming into a tight-grip handshake to symbolize the respect and tolerance that the bemonte locals showed to the jewish community. 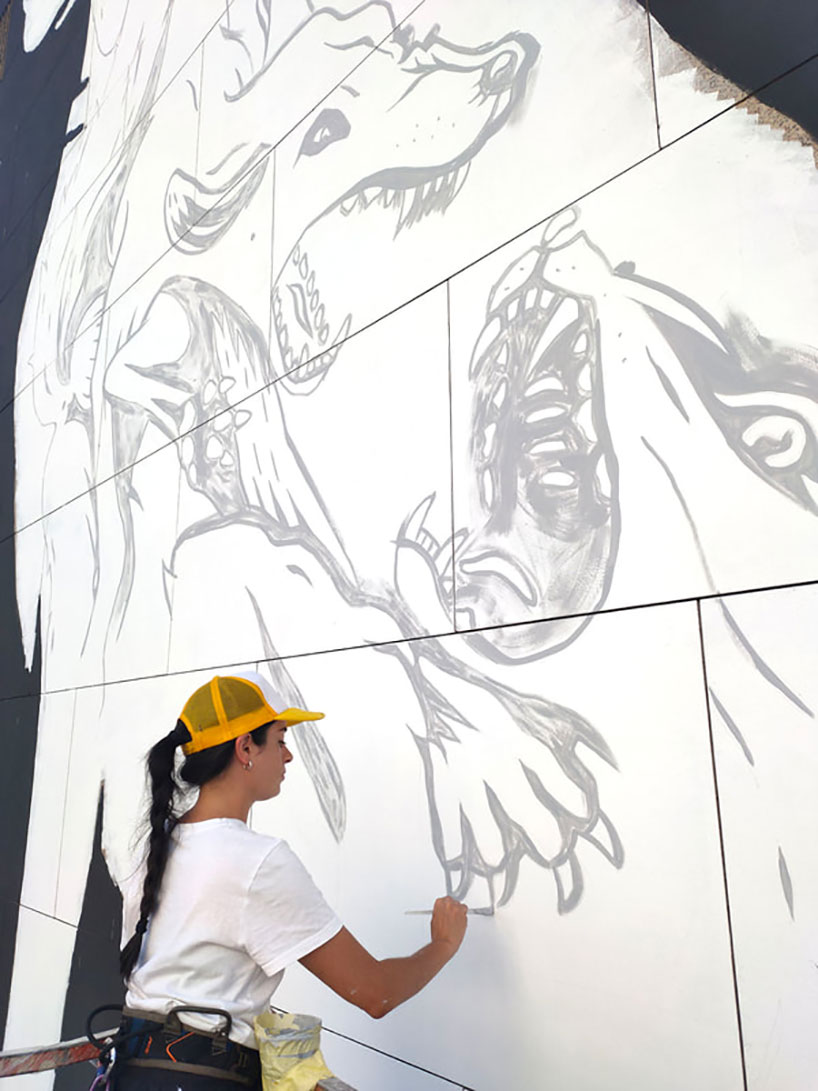 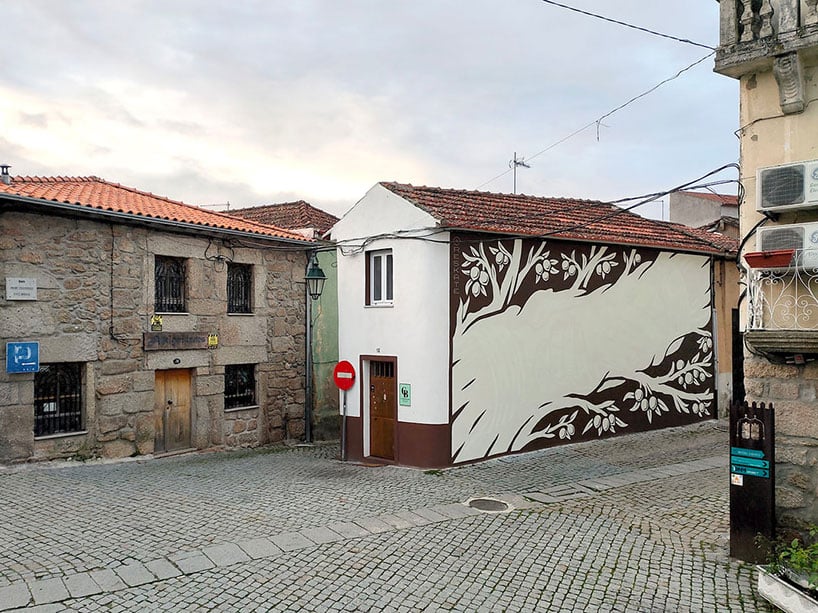 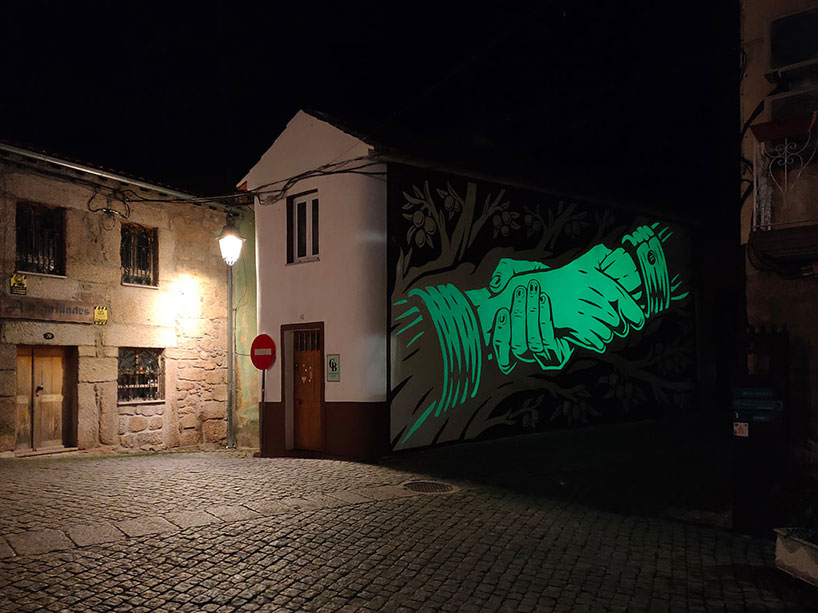 projects: ‘connectivity’, ‘domestication’,  and ‘the peace of belmonte’.