during design miami / basel 2010, gabrielle amman // gallery presented four new limited edition furniture and lighting pieces by swiss designer rolf sachs presented: his ‘alone in a crowd’ table (2010) and dome light series entitled, ‘curiosities’ (2010).  sachs continues to be seduced by the ongoing traces of life, depicting these many traits through his new work.

sachs gets a bit nostalgic in his dome light series ‘curiosities’ which consists of three lamps: ‘addict-us’, ‘pullus dometicus’ and ‘rattus maxiums’, each offering a surrealistic reinterpretation of the content present within typical museum displays. the mirrored domes contain an integrated light source, allowing the illuminated mirror coating to become virtually transparent, revealing a hidden surprise within its centre. the reflections created on the inside of the domes evoke a sense of intrigue and mystery. every time you look, you will discover something new. each dome light is available in a series of 17. 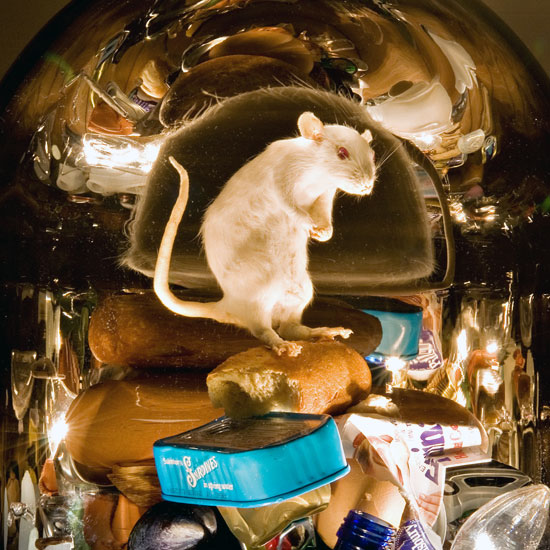 ‘rattus maximus’ presents an albino rat, standing triumphant like a ruler, atop a pile of random, mundane household rubbish which include: an analogue clock, cat food, coffee capsules, a peanut, egg and clam shells, sardine and coke cans and broken glass. amongst the items is a sponge printed with the word ‘leitkultur’ (translated as ‘common culture’ or ‘basic culture’), challenging the concept of the german terminology, mocking the concept of intellectuals that follow only one ruling paradigm of culture. 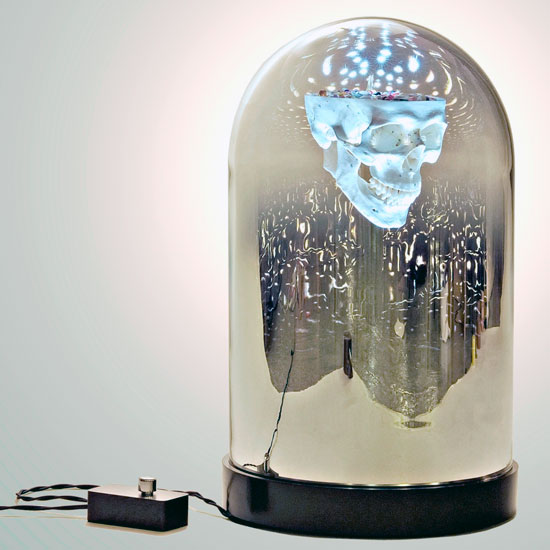 ‘addict-us’ was first featured in the selfridges surrealist window display in 2007. within its dome, sachs showcases a scientific skull filled with multi-purpose pills, demonstrating humans’ addictive tendencies in our modern society. 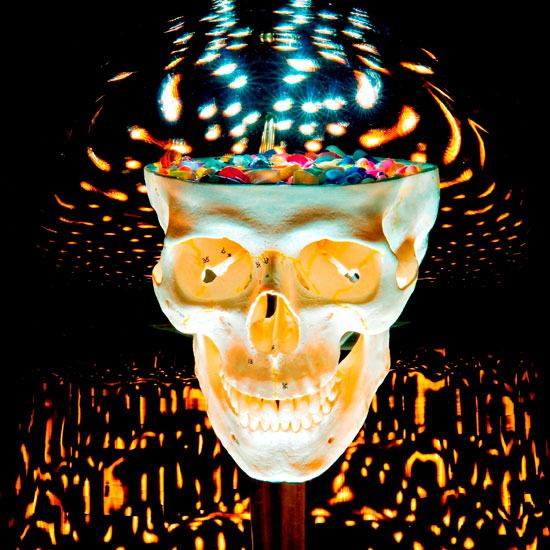 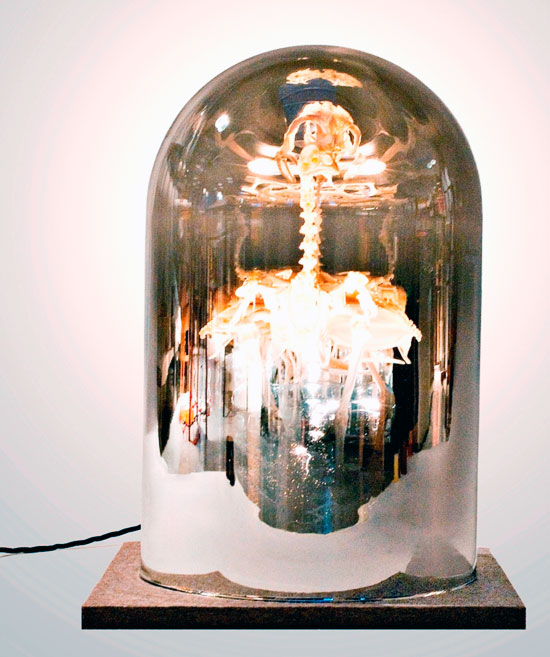 a pristine skeleton is situated at the centre of ‘pullus domesticus’. appearing at first like that of a small dinosaur, the bones however, actually belong to that of an everyday, domestic chicken. 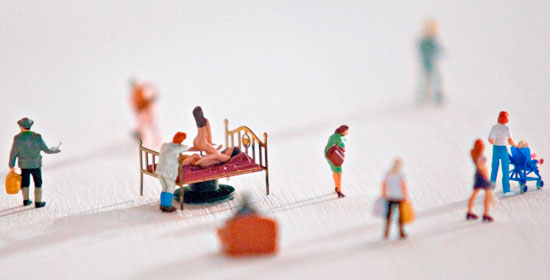 the ‘alone in a crowd’ table re-visits the theme of using miniature scale figures, similar in principle to sachs’ piece titled ‘alone’ from 2006. displayed under a glass surface are 511 preiser miniature figures representing all walks of life, genders and ages, which sachs has individually placed within. when viewing the figures from afar, one only sees groups and crowds, however, when seen up-close, you are able to recognize that each figure is entirely individual and that he has arranged them within random and humorous frames of everyday life. hardly any of them are interacting, with the exception of society’s crucial units such as couples, lovers and families. the dramatic juxtaposition of scale puts our own existence into perspective and leads us to realize that ultimately in life, we stand alone. the clock hands pass above the crowds,  demonstrating that we are only temporary. 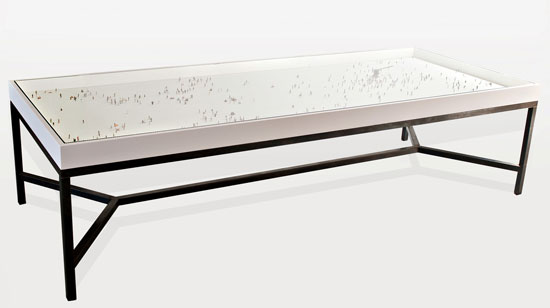 ‘alone in a crowd’ table 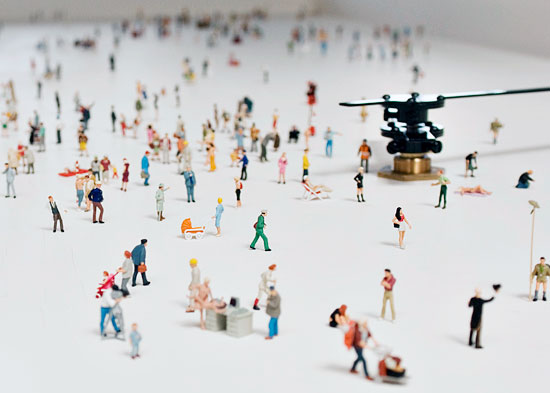 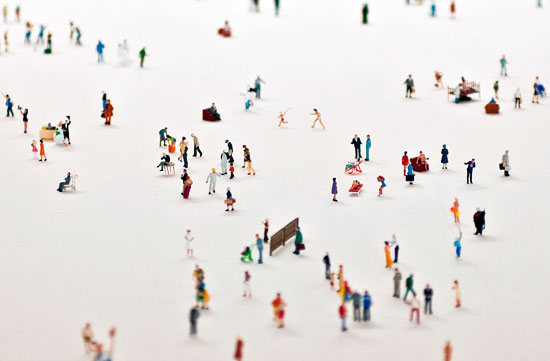 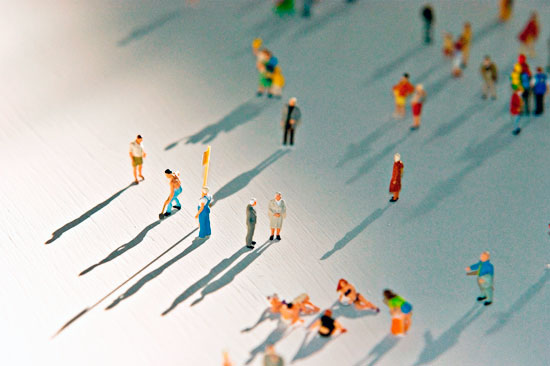 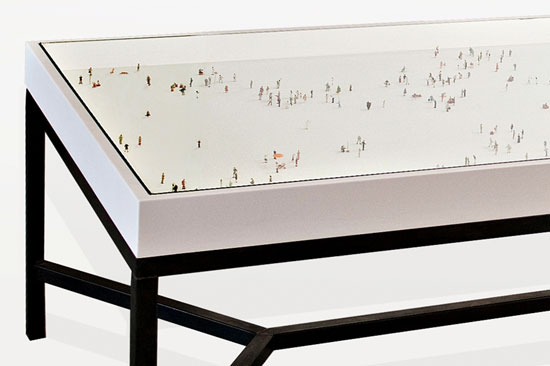