we’ve been a bit hungry for food art lately!

from more scientific explorations as seen in the decomposing silicon fruits by michel lamoller, to the perfect pantone palette pairings by david schwen, when it comes to the topic of food people go bananas!

the kitchen is where it all begins–the heart of the home which is not only a place of preparing and sharing meals, but also a social hub where friends and family gather. there was a time when it was defined more as a work space than a living space, but overtime its role within our domestic environments has evolved, and the distance between a cook and his guests has minimized.we see more and more in the design of new homes, the kitchen opening up onto other rooms, so that there is no longer a physical barrierbetween the culinary laboratory and the rest of the activities that are going on in the shared environment. in this way, he who prepares the food has now become somewhat of a performer. this is further evidenced in the many restaurants that have now adopted this concept of the ‘open-kitchen’, where patrons are able to watch their meals being made right before their eyes.

in short, the kitchen is a world of its own.one where food is cut and cleaned, cooked and seasoned, served and eaten. when there are leftovers they are put in the fridge, or frozen, then reheated in the microwave, and if we forget about it, it is thrown away, and left to decompose over time. 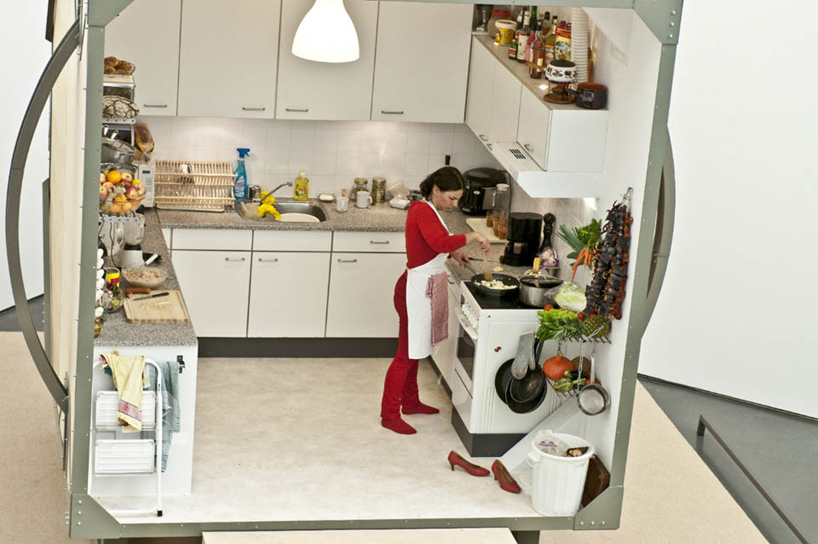 a cook performs on the kitchen stage, preparing food for gallery goers

zeger reyers explores these various ideas in his work ‘rotating kitchen’ in which he envisions the space as its own micrcosm.commissioned by the kunsthalle düsseldorf for their ‘eating the universe. food in art.’ exhibition, the dutch artist conceived a fully equipped kitchen,that was set on the gallery floor. within a cook was found preparing snacks and serving drinks to visitors of the vernissage.when more than half of the food had been, the dishwasher full and switched on, the cook left, with all of the containers of ingredients,cooking utensils, pots and pans on the counters, herbs and spices open, as well as open bottles of wine, for what seemed to be a temporaryperiod of time, perhaps for a smoke or bathroom break. upon is exit, the kitchen slowly began to tilt and turn, rotating a complete axis inapproximately fifteen minutes. this continued for the entire duration of the show, whereby everything inside the cubic space started to slide,then falling onto opposing walls, cupboards ending up on the floor… thus the kitchen turned into a giant blender, slowly mixing ingredients,as well as all of the tools, utensils, and tableware together, the resulting sludgy substance gradually staining all sides of the structure.at the end it was a painting and sound device, accompanied by the changing smell coming from the waste.

the performative installation dealt with notions of change and decay in relation to food, highlighting the ways in which we unconsciously waste food.here, the quotidian unit, symbolically familiar to us, has gone rebellious, now turning against us, however still serving up a plate to please–or tease–our senses, but something uncontrollable. 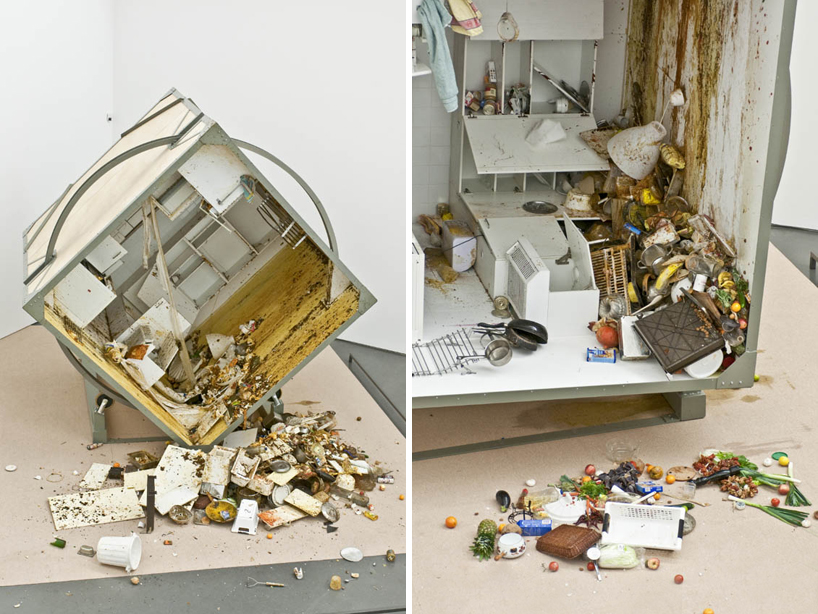 over the course of its installation the quotidian space slowly rotated, resulting in a large sound and painting device… 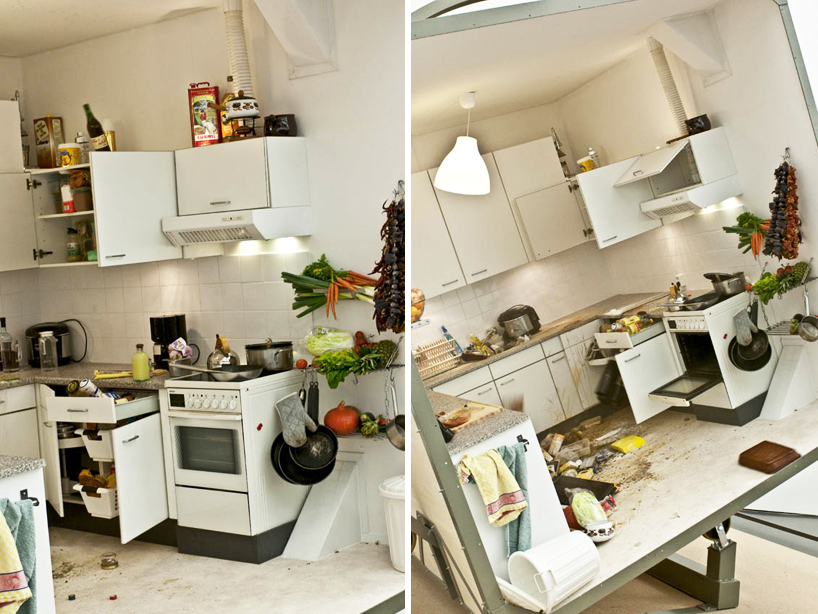 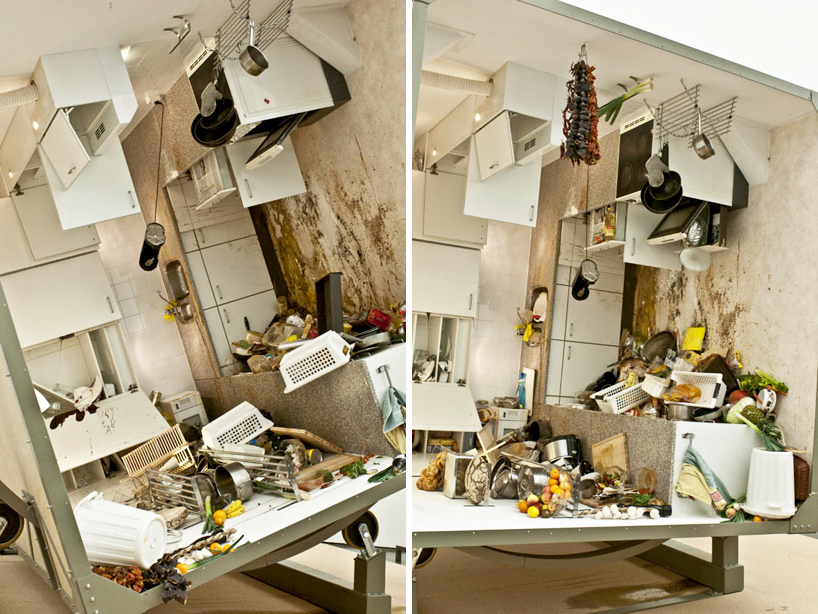 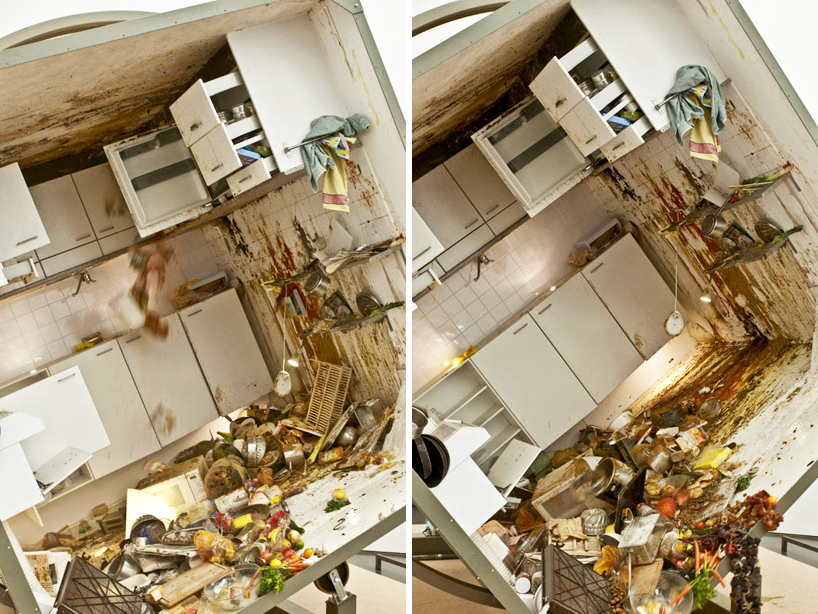 over time, the food began to rot and decay, the walls painted in the sludgy mixture 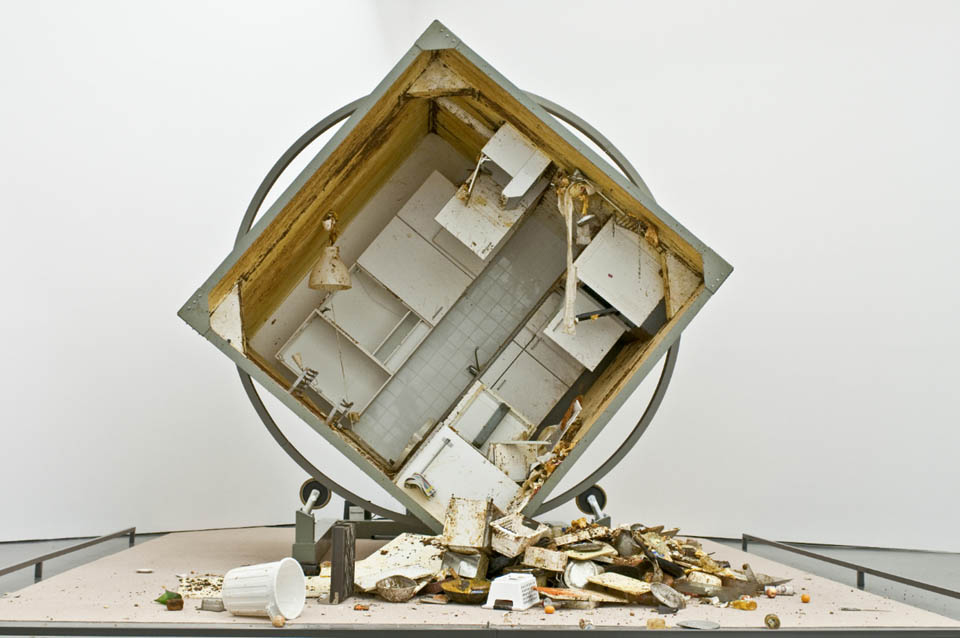 the ‘rotating kitchen’ upon completion

Sep 28, 2021
a dialogue with artist jeff koons: trust in yourself!
in our recent interview jeff koons also reveals that, as a logical extension of his practice, he will soon foray into NFTs.
art
264 shares
connections: +310