‘ex limbo’ by belgian art collective rotor is an investigation of the scenographic elements that have been realized for the fashion show sets designed by and for prada, alongside rem koolhaas / OMA  for over more than a decade.  installed inside the fondazione prada‘s space on via fogazzaro in milan, ‘ex limbo’ presents the conservation of every single structural component used in these catwalk constructions for the italian fashion house’s past runway shows. 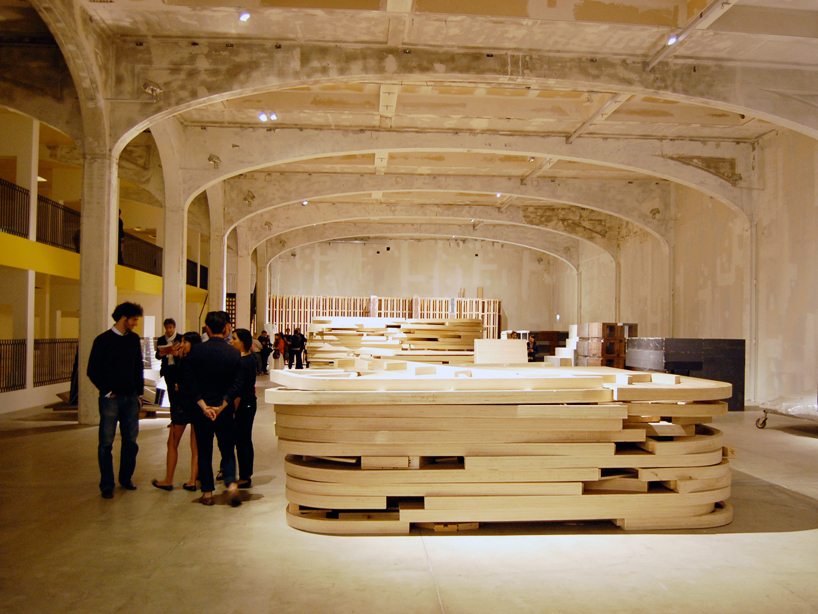 interested in material flows in industry and construction, rotor brings out every single one of these disassembled and reorganized structures and objects from miuccia prada’s storage, making them the focus of their installation. piles of wood, polyethylene seats, metal structures, mirrors and walls are brought back into the space where they were first presented – reinstating their original purpose – in a systematic inventory of what was stored in prada’s archives.

excerpt from a discussion between rotor and miuccia prada: rotor: we realized that everything could fit in the via fogazzaro space. miuccia prada: how many fashion shows do you mean? rotor: from what we found, probably everything you ever kept. miucca prada: I keep everything! 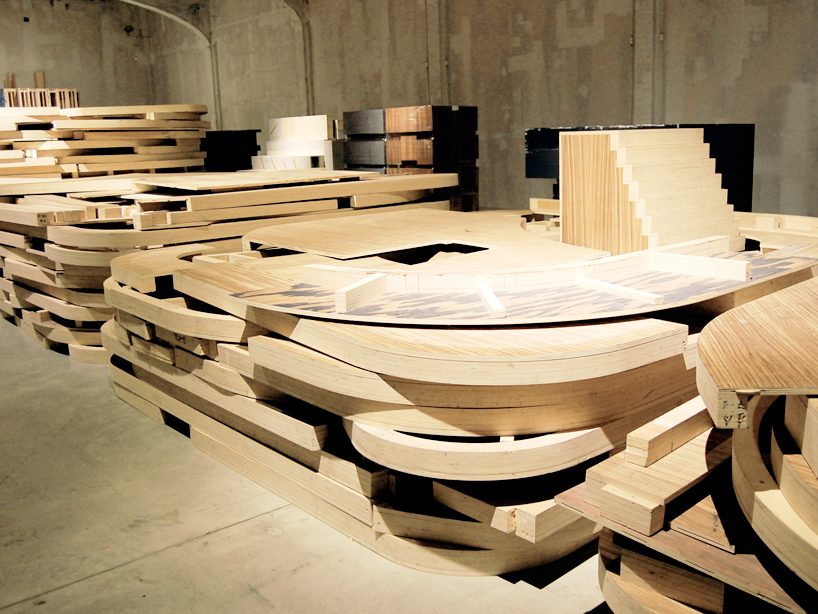 assemblage of 25 mm plywood panels recovered with a veneer of zebrano wood protected by a transparent varnish on the visible surface stacked in separate piles; the sizes of these piles is determined by the dimensions of the largest modules. of the nine islands used for the set of the fashion show, eight tacks were made in the flat hall of largo isarco. they were used as seating during the men and women SS 2009 fashion shows (6/2008 and 9/2008). four of the nine islands were reused for the next season, FW 2009 (1/2009 and 2/2009) image © designboom

what might seam to be waste, for of course miuccia prada, the materials all convey memories of previous runway shows that are brought back to life. 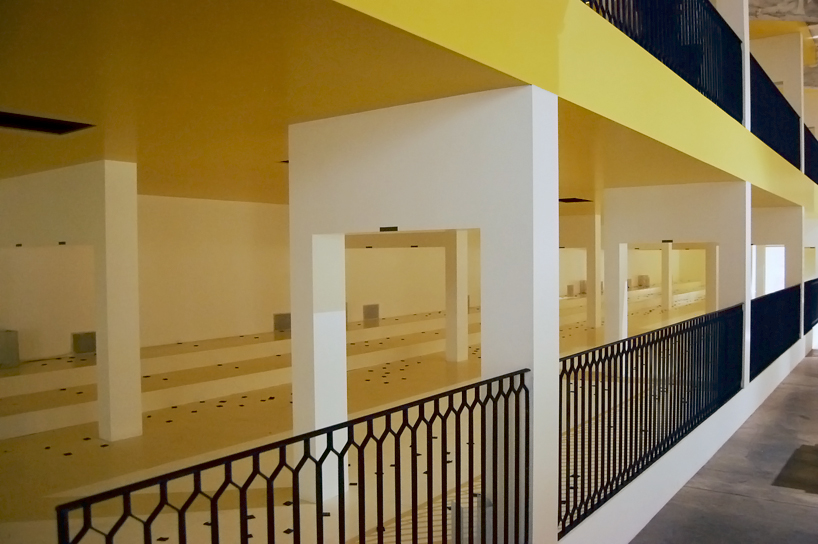 construction consisting of a steel structure, wall-mounted MDF, plywood coated with vinyl used twice as a catwalk for the men and women 2011 fashion shows (1/2011 and 2/2011). it will stay in via fogazzaro until a decision is taken concerning its possible reuse. between the two events, the openings in the separating walls are widened from a small window to vertical openings. the type of seats, the color of the catwalk and the lighting were also modified. 38 x 7 x 6.35 m / 1689 m³ overall volume image © designboom 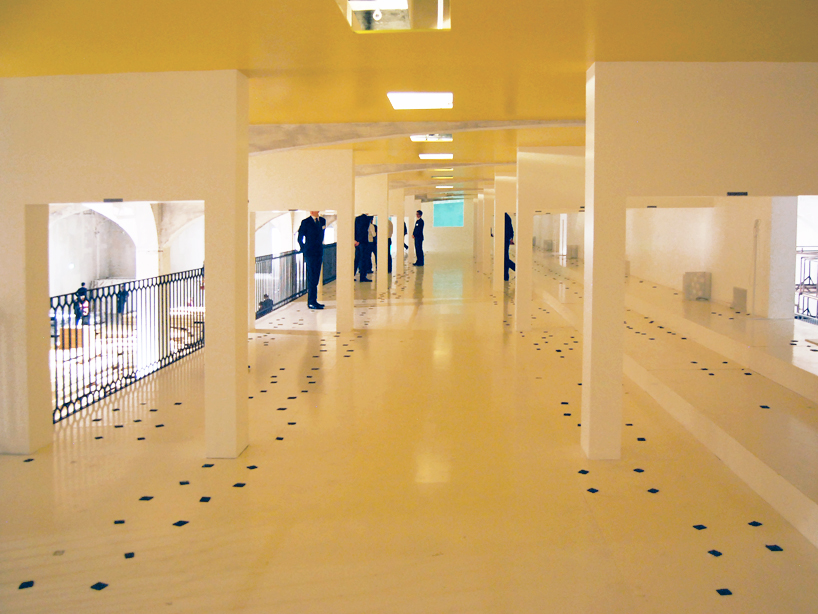 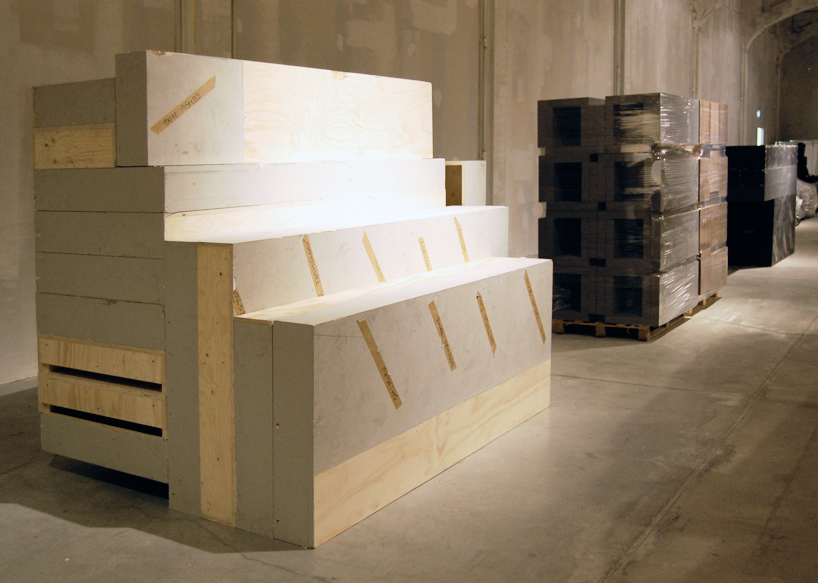 plywood podium structure painted beige left in the via fogazzaro space after eing used during the men and women’s FW 2011 fashion shows (1/2011 and 2/2011). as usual, the names of the accredited photographers are written on pieces of adhesive tape. this podium was placed at the end of the exterior runway, and was crowded with 40 photographers during the fashion show. image © designboom 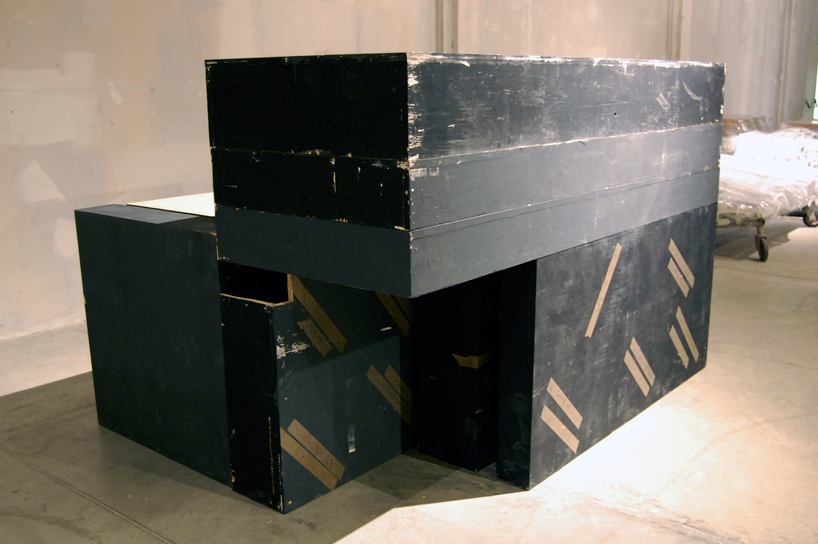 blocks made of pinewood, painted black, stacked in the flat hall of largo isarco and still bearing the names of accredited press photographers. they were used as podiums for the press photographers during different fashion shows include the women’s FW 2006 runway (2/2006). their neutral appearance makes them difficult to traces to other specific events. 100 x 100 / 250 x 20cm each element / 5.9 m³ overall volume image © designboom 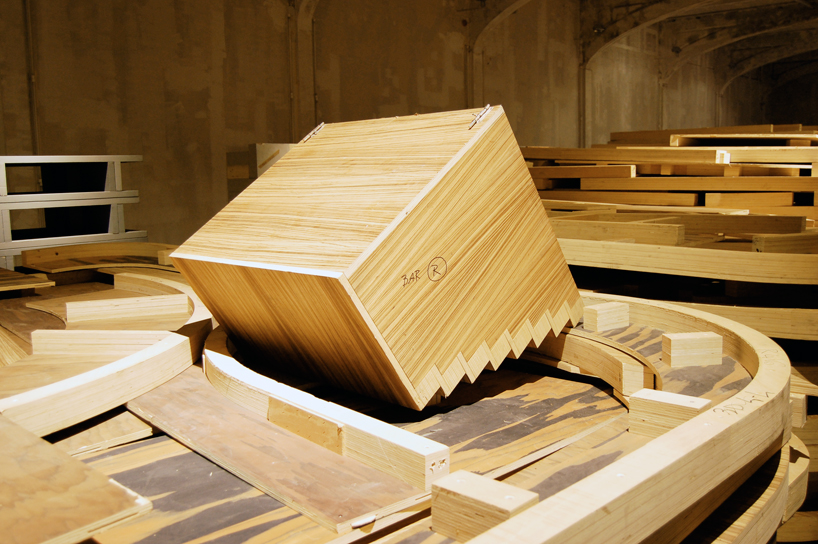 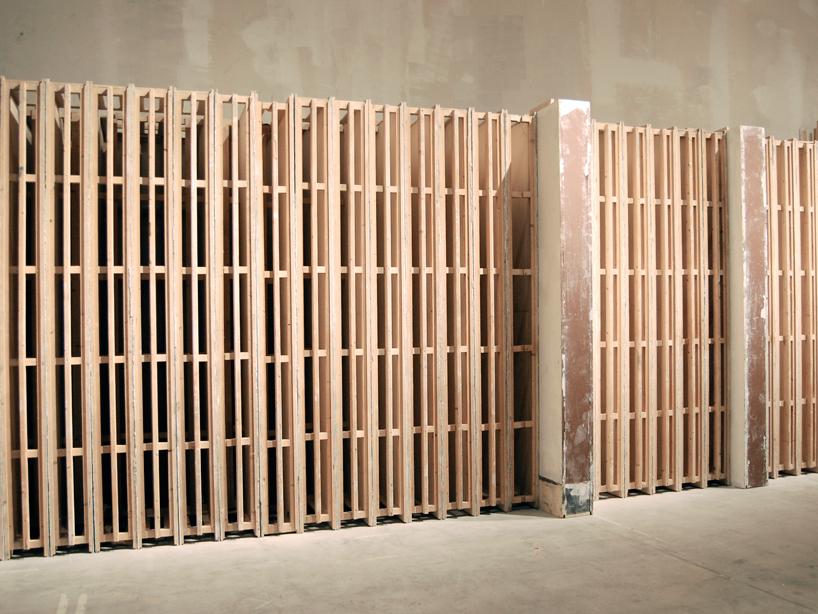 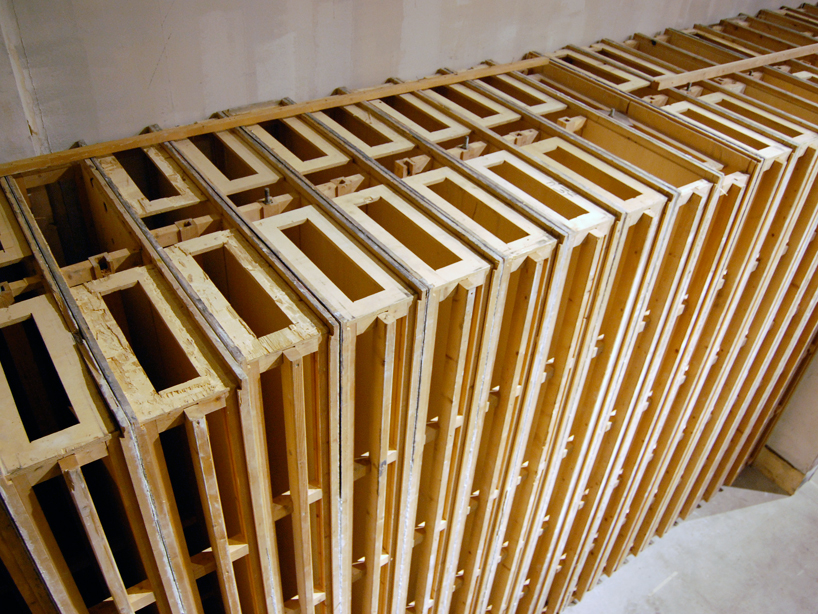 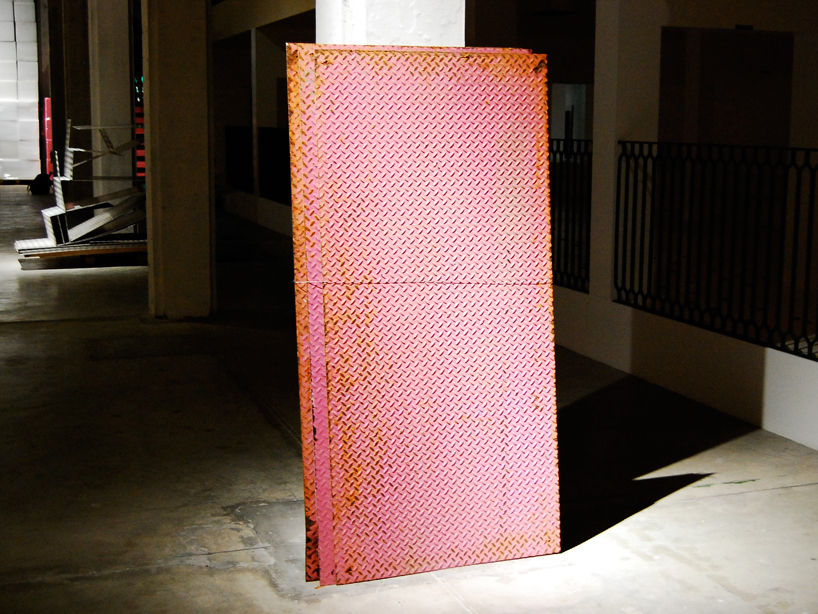 embossed steel sheets covered with pink paint on one face were used as a ramp in the flat hall of largo isarco; two at the entrance and one between two floor levels. the sheets were used as floor coverings during the men and women’s FW 2010 fashion shows (1/2010 and 2/2010). 3 elements / 85 x 177 x 0.3 cm image © designboom 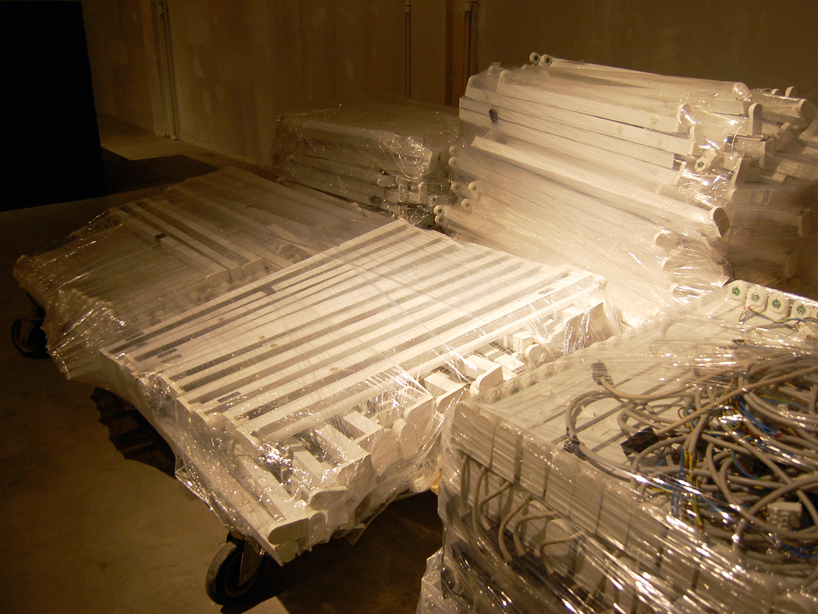 fixtures and fluorescent tubes stacked on pallets and partially plastic-wrapped in the flat hall of largo isarco. the neons and their flickering were a major part of the scenography for the men and women’s SS 2011 fashion shows (6/2010 and 9/2010) 7 pallets / 1050 elements / 90, 120, 150 cm length image © designboom 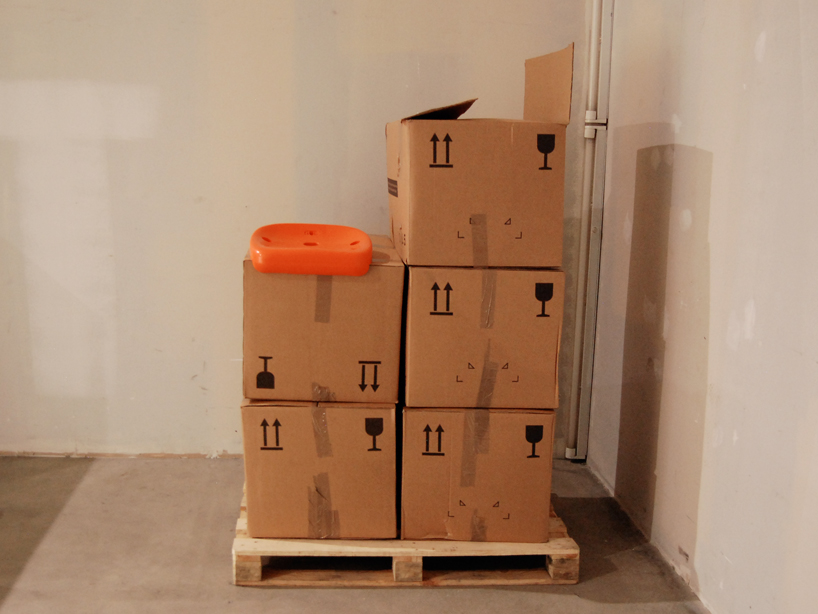 orange seats in polypropylene stored in plastic-wrapped cardboard boxes on a pallet in the flat hall of largo isarco. during the men and women SS 2011 fashion shows (06/2010 and 9/2010), this type of seating was screwed to the plywood panels of the stands. the fashion show was reproduced at the central academy of fine arts museum of beijing in january 2011. only the orange seats were reused; the rest of the set was rebuilt on site. most of the seats are still in beijing. 1 pallet / 60 elements / 42 x 35 x 8 cm each image © designboom 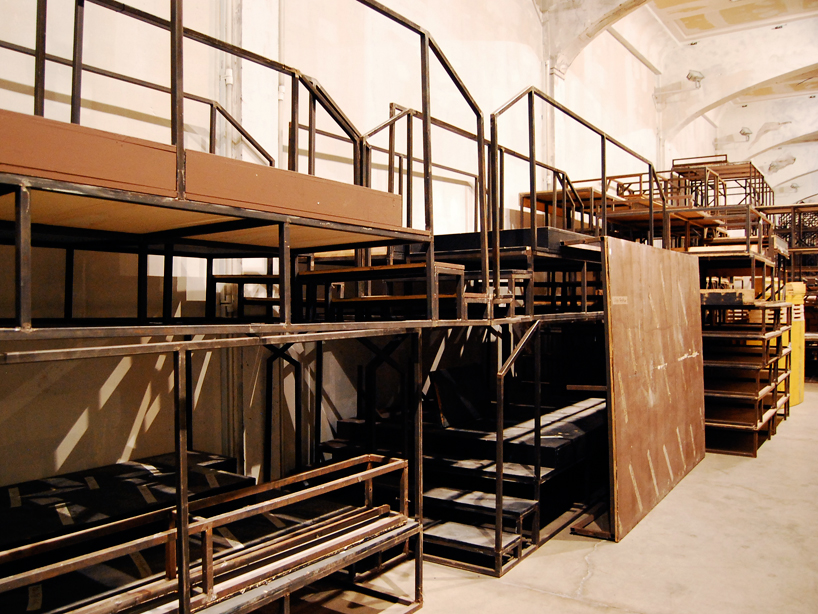 a group of metallic structures made of untreated steel tubes, with plywood paneling, stacked up to 5 meters high in the long hall of largo isarco. the stacks began with the flattest and more modular items, to culminate with the most intricate steel articulations. these structure have been used as frames for building platforms and tribunes for many events and fashion shows, predating OMA’s involvment in designing the sets for the shows. they were used before 2001, when the fashion shows were taking place in the prada headquarters in via maffei. the wooden panels bear traces of multiple layers of paint and fabric. they have an overall volume of 390 m³. 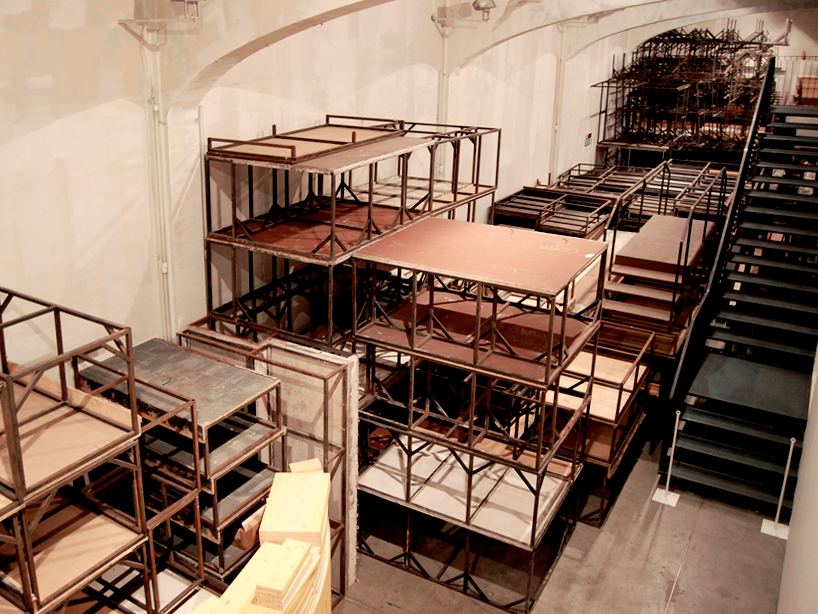 podiums with handrails of untreated steel and plywood panels are laid along the floor int eh long hall of largo isarco. they were used as platforms for the audience at the fashion shows for the men and women’s SS 2006 (6/2005 and 9/2005) and women’s FW 2006 runway shows (2/2006). 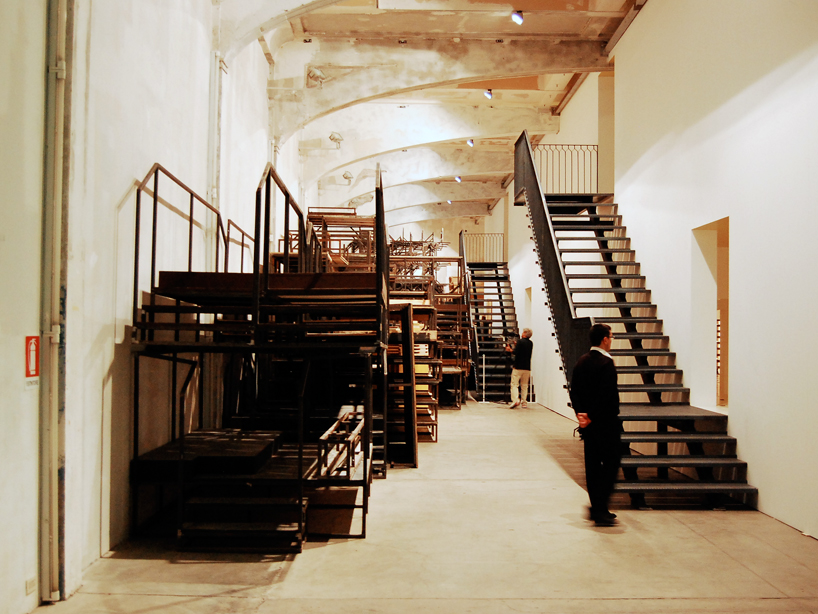 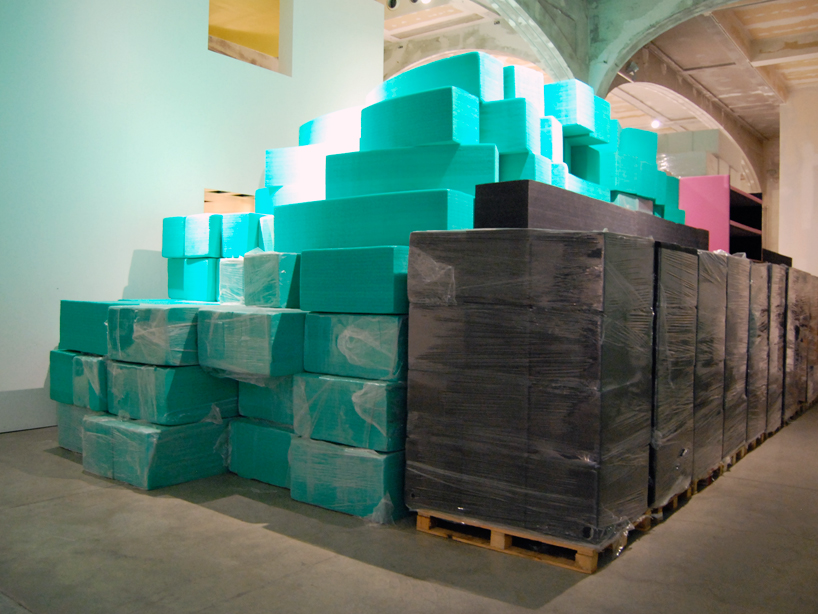 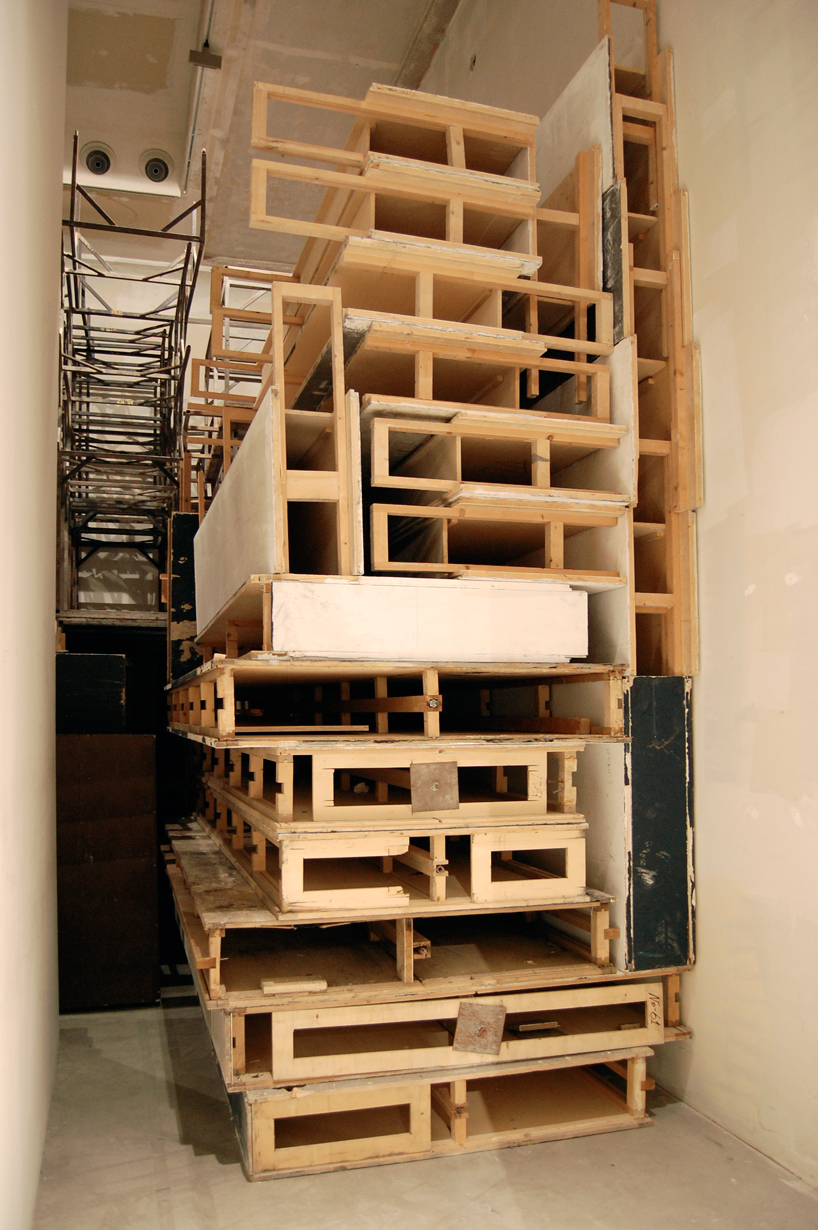 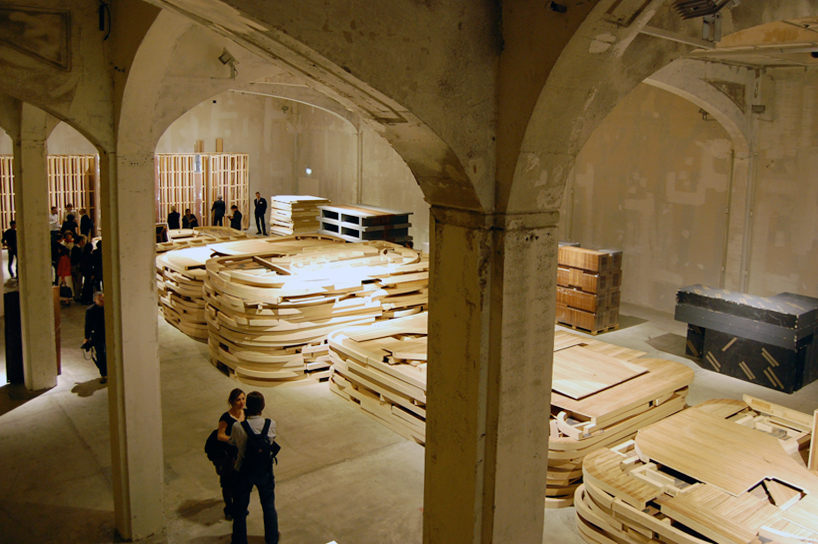 view from above image © designboom 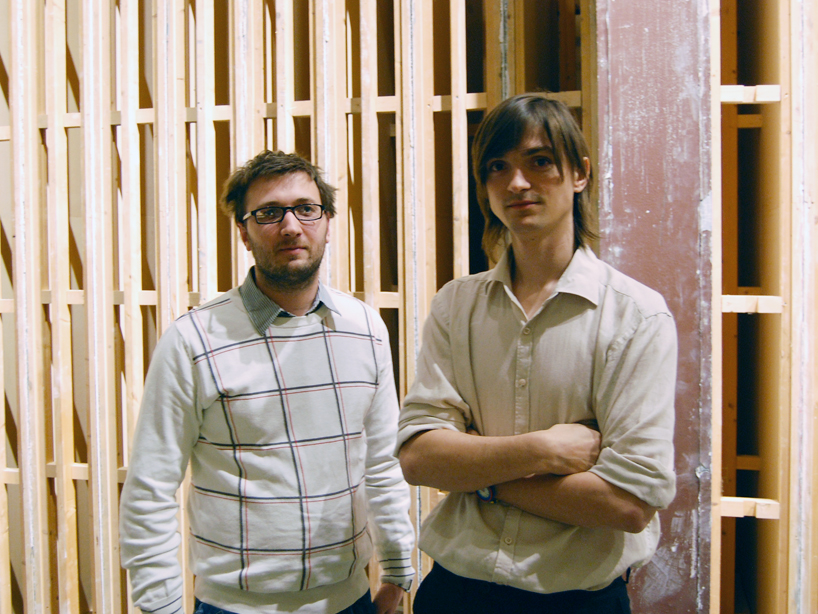 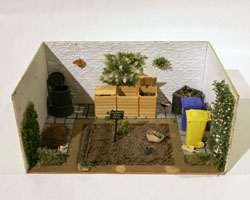