russian criminal tattoos archived by arkady bronnikov on exhibit
police files print no. 9 / © arkady bronnikov / FUEL
(above) on the arm beneath the skull is the latin phrase memento mori meaning ‘remember that you will die’. the double-headed eagle is a russian state symbol that dates back to the 15th century and was used by peter the great. in 1993, after the fall of communism, it replaced the hammer and sickle as the coat of arms of the russian federation. this photograph taken in the soviet period shows this emblem tattooed as a bold symbol of power and rage against the USSR. it can also be interpreted as ‘russia for the russians’ or ‘for a russia without yids, wogs and marxist-leninists’. the statue of liberty implies a longing for freedom, while the dark character holding a gun denotes a readiness to commit violence and murder. the eyes on the chest signify ‘I can see everything’ and ‘I am watching’, the powerful tattoo of a criminal ‘overseer’. the eight-pointed stars tattooed on the shoulders mark the bearer as an ‘authoritative’ thief.

as senior expert in criminalistics at the USSR ministry of internal affairs for more than thirty years, arkady bronnikov can be regarded as russia’s leading expert on tattoo iconography. from the mid-1960s­ to mid-1980s, he visited correctional institutions of the ural and siberia regions where he interviewed and documented images of convicts and their body art, going on to build one of the most comprehensive archives of this category. he regularly helped solve criminal cases across russia, exclusively granting the collection for police use, to aid in the identification of culprits and corpses. his photographs of nameless figures present a visceral representation of criminal society; their bodies illustrate an unofficial personal account of their history, imbued in symbolism and metaphor. 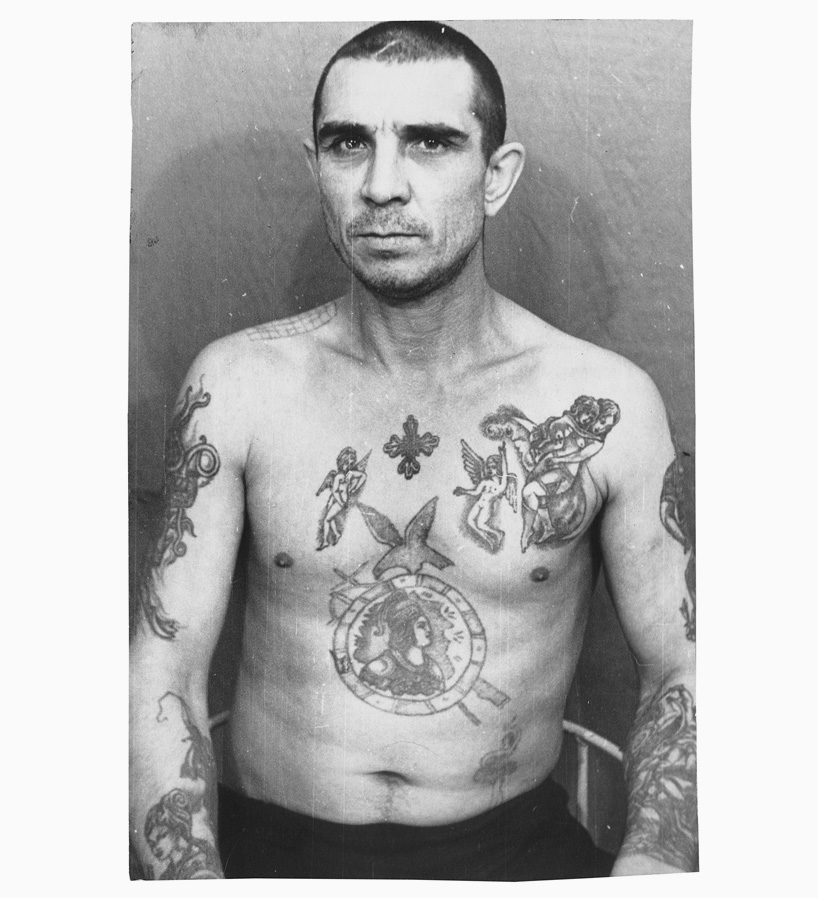 in 2013, london-based design & publishing house FUEL acquired this collection of 918 photographs. a selection of these photographs has been published by FUEL in a book titled ‘russian criminal tattoo police files‘, comprising over 180 photographs and accompanying texts from the arkady bronnikov collection and also featuring a 48-page section printed on pink paper with texts, mug shots and criminal profiling.

the tattoos on this inmate mimic those of higher ranking criminals and indicate the bearer has adopted a thieves mentality. however, he does not wear the ‘thieve’s stars’, he is not a ‘vor v zakone’ or ‘thief-in-law’, and therefore holds no real power among this caste. as soon as normal inmates enter the mass population of the ‘zone’ (either a prison or a camp), they realize that the thieves are in charge. they copy both their tattoos and mannerisms in an attempt to elevate their status. for self-protection they need to show themselves to be exceptional, experienced, brave and seasoned men. in addition to fear, respect and the obedience of friends, their tattoos are intended to demonstrate a desire for self-assertion and the conquest of authority in the criminal environment. 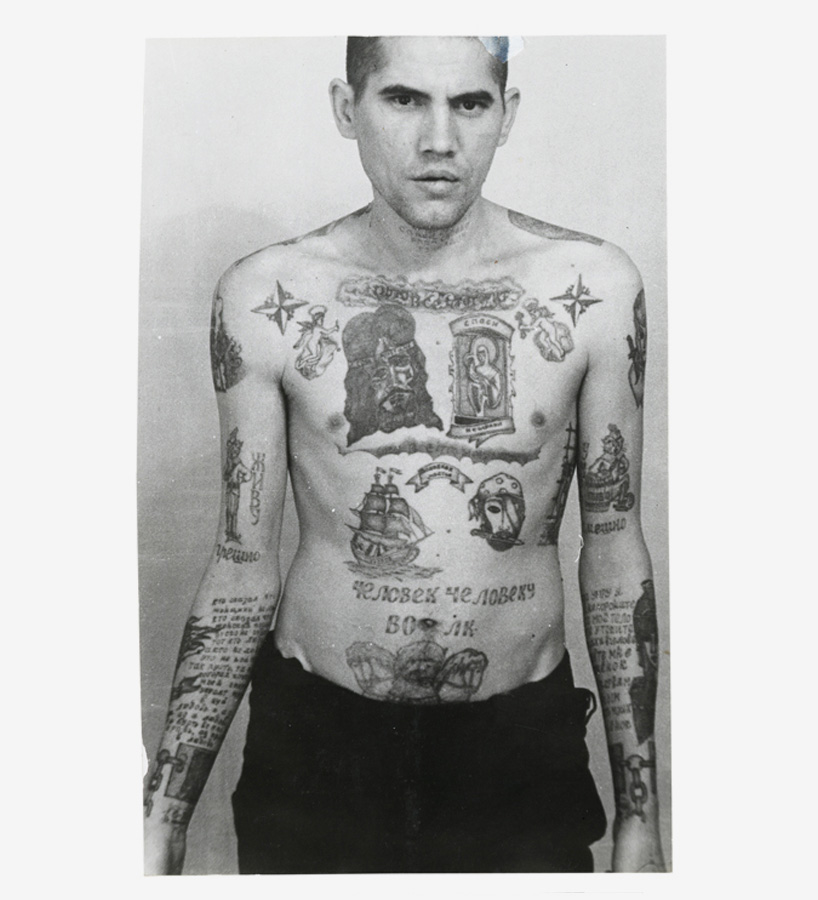 text on the stomach reads ‘man is wolf to man’. text across the arms reads ‘live in sin, die laughing’. a pirate with a knife in his teeth is often accompanied by the acronym ‘ira’ (a russian female name) written on the knife, which stands for idu rezat aktiv (I’m off to kill the activists). worn by otritsaly (prisoners who refuse to submit to the prison rules) it denotes an inclination to brutality, sadism, and a negative attitude towards activists – prisoners who openly collaborate with prison authorities. 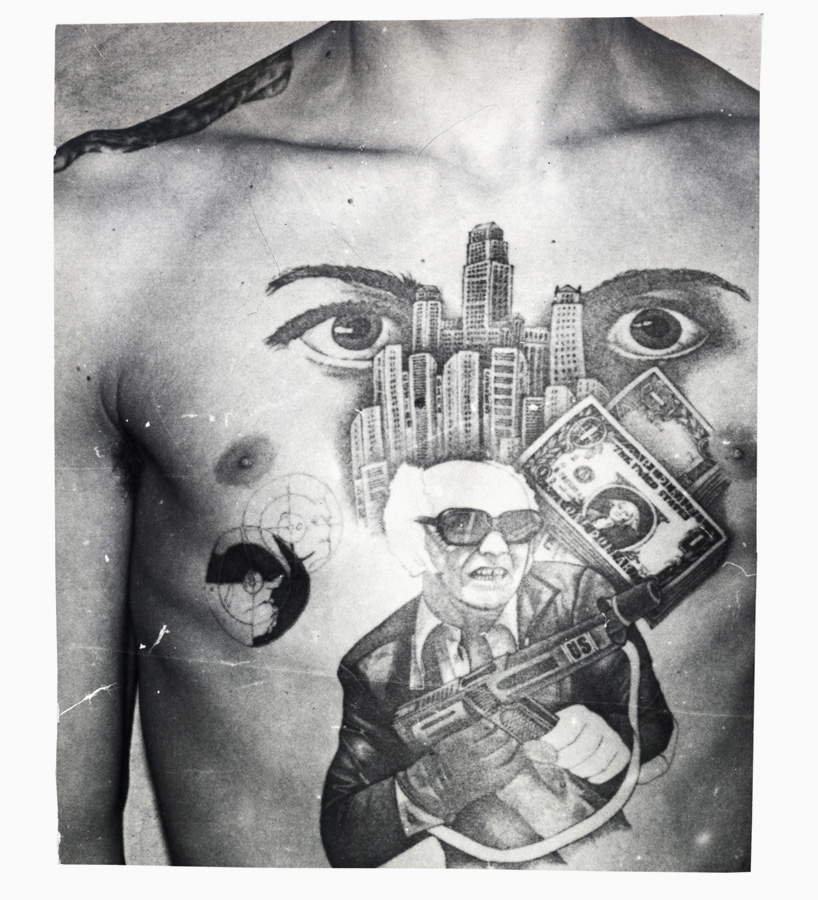 the dollar bills, skyscrapers and machine gun with the initials ‘US’ stamped on it convey this inmate’s love for the american mafia-like lifestyle. the eyes signify ‘I’m watching over you’ (the other inmates in the prison or camp). 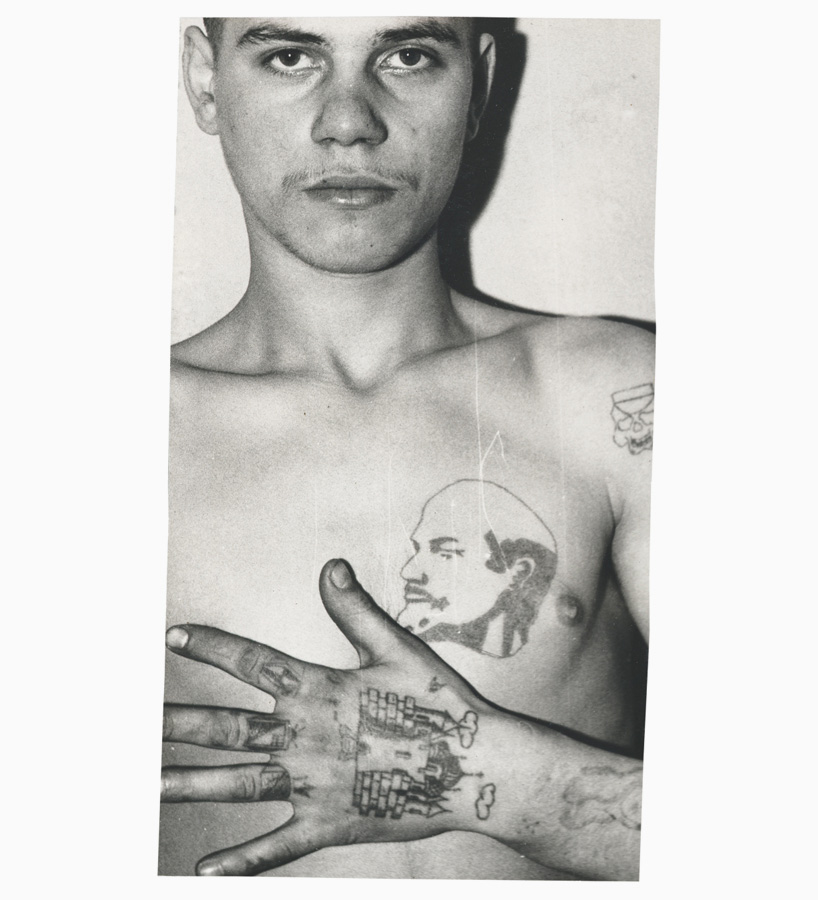 on the index finger is a variant of an ‘otritsala’ ring, denoting someone who is hostile to law-enforcement and the regime. they cannot be re-educated. middle finger ‘freedom for the youth’ or ‘I’ve done time and I will steal again’. third finger ‘ruined youth’, the bearer was convicted as a juvenile. the five dots on the wrist are a common sign of someone familiar with the prison regime. they signify ‘four watchtowers and me’ or ‘I’ve been through the zone’, an inmate who has served a sentence in a correctional labor or penal colony. lenin is held by many criminals to be the chief pakhan (boss) of the communist party. the letters bop, which are sometimes tattooed under his image, carry a double meaning. the acronym stands for ‘leader of the october revolution’ but also spells the russian word vor (thief). 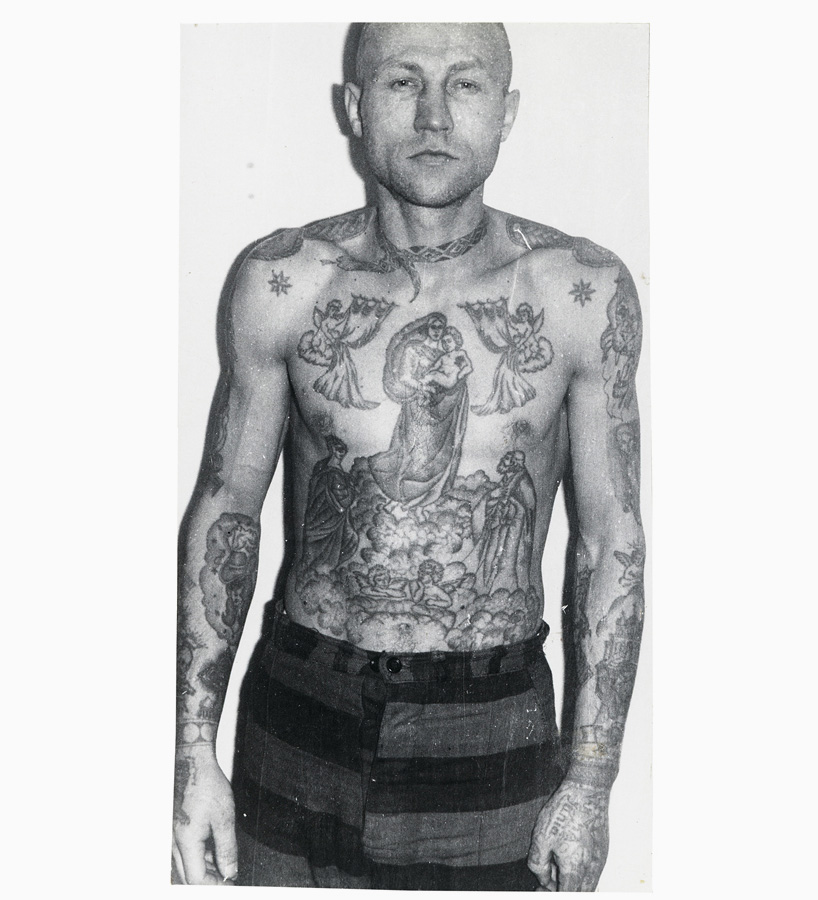 a snake around the neck is a sign of drug addiction. most inmates are either alcoholics or substance abusers. their crimes are often committed while in a state of intoxication. the stars on the clavicles and epaulettes on the shoulders show that this inmate is an authority. the trousers worn by the inmate are part of the uniform of a special regime colony, the strictest type of regime in the soviet union. criminals sent here are known as osobo opasnim retsidivistom (especially dangerous recidivists), who have carried out grave offenses such as murder or pedophilia. they are assigned to harsher and more restricted regimes of detention than other prisoners, and are not subject to be released on parole. 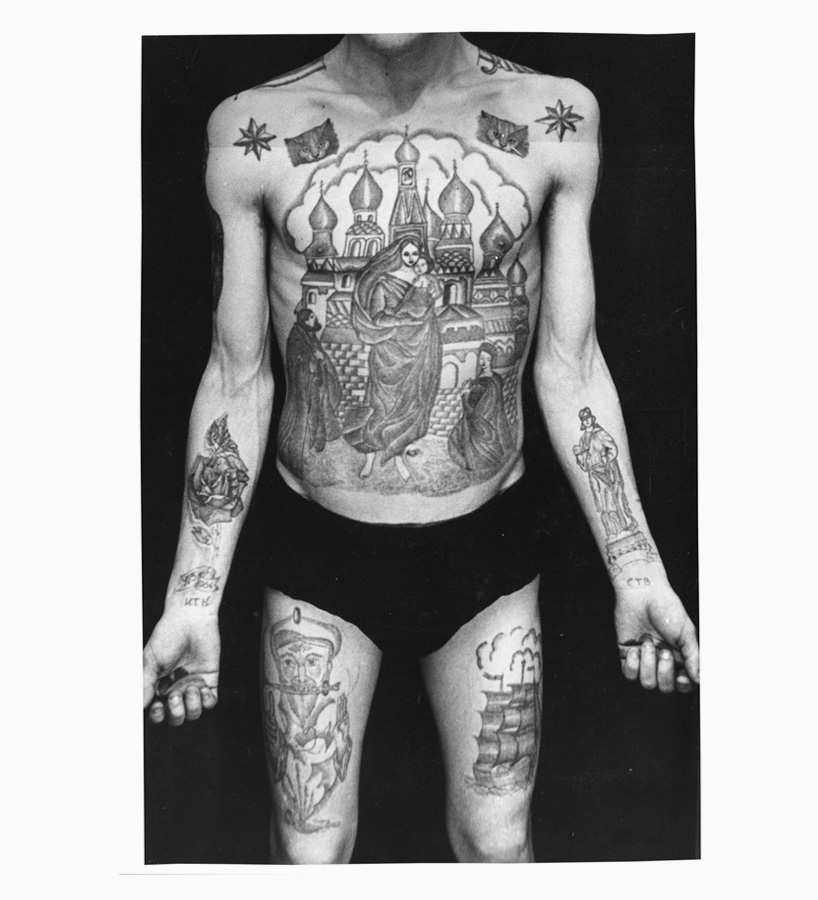 text on the right wrist reads ‘1975-1984 itk’ ispravitelno trudovaya koloniya (1975-1984 correctional labour colony); the rose above the dates denotes the bearer spent his youth in prison. the acronym on the left wrist reads ‘stv’ severnaya gruppa voisk (northern army group) applied during conscripted army service. this thief is tattooed in the traditional fashion with a large image (usually a church or a cross) taking up the most important part of the body: the chest. this is intended to show a devotion to the thieves’ traditions and stand as proof that his body is not tainted by betrayal, that he is ‘clean’ before his fellow thieves. the number of cupolas on the church signifies the number of convictions (in this case six). the image of a cat’s head with open eyes applied to the pectoral muscle, the scapular region or on the top third of the shoulder area signifies a residential burglar, who enters premises through a window or unlocked door. this tattoo is also applied to criminals who strangle their victim (usually rapists). on the left leg a sailing ship with a white body, shaded sails and flags on the masts is the distinctive sign of a gulnoy – someone who has fled from custody, putting themselves in an illegal situation to engage in criminal activity. also a ‘nomadic traveller’, a migrant offender who travels to various cities to commit theft. on the right leg is a genie emerging from a lantern – the sign of a drug addict, this can also mean that the bearer was convicted of a crime while under the influence of narcotics. 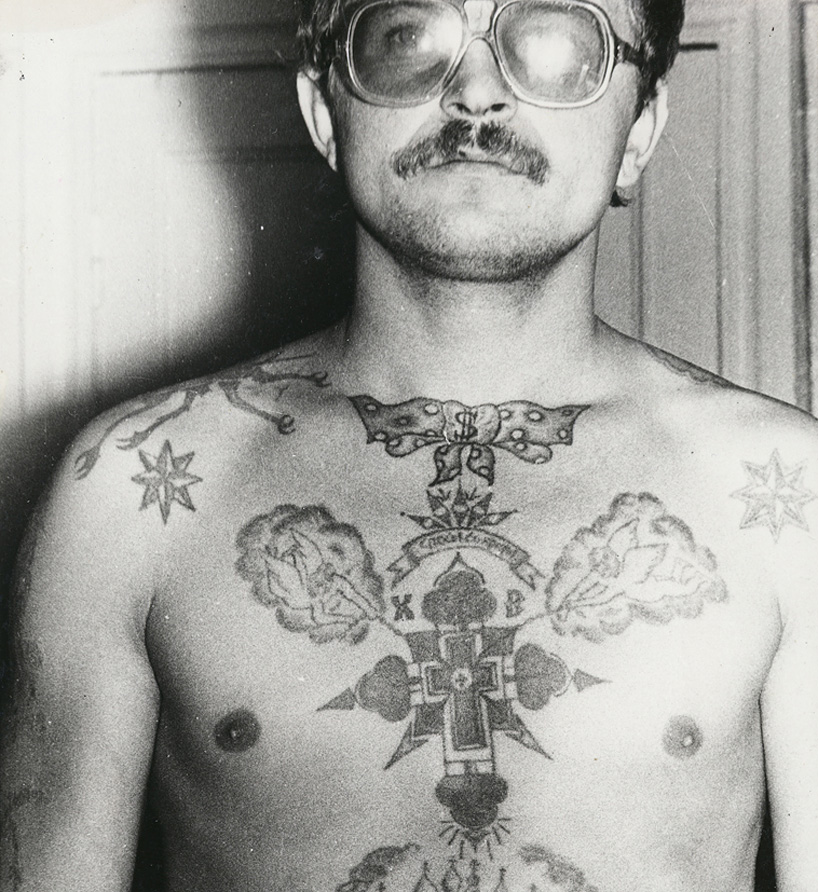 text on the chest reads ‘save and protect’. text either side of the cross reads ‘xv’ hristos voskres (christ has risen). the eight-pointed stars on the clavicles denote a high-ranking thief. a bow tie tattooed on the neck is often found in strict regime colonies. originally bow ties were a dishonorable tattoo. they were forcibly applied underneath the clavicle cat tattoos of pickpockets who had broken the ‘thieves’ code’ and sided with the authorities. today, however, there is no stigma attached to them. the dollar sign on the bow tie shows the bearer is either a safecracker, money launderer or has been convicted for the theft of state property. 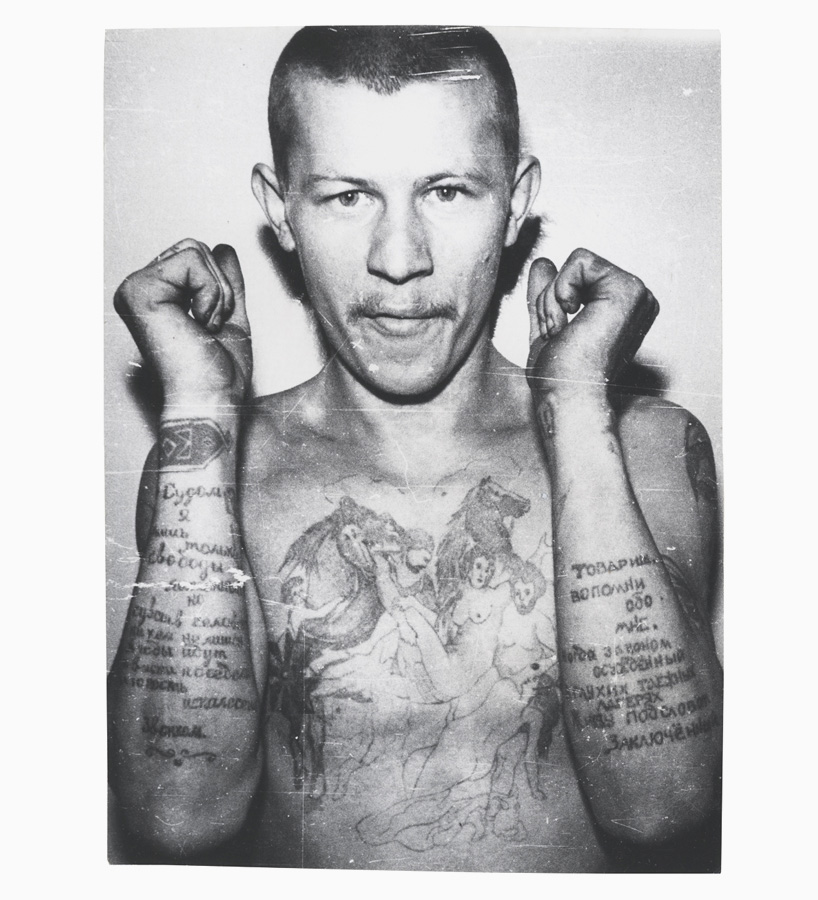 text on the bearers right arm reads: ‘the court only deprived me of freedom, but nobody deprived me of human feelings. and the years go by, and my temples have gone grey, and my youth has been damaged.’ the bell tolls [meaning he is serving his time ‘to the bell’ – the full sentence with no remission]. the manacle on the wrist indicates a prison term of more than five years (if they tattooed on both wrists, more than ten years). if the manacle is ‘broken’ it means the prisoner is an escapee. text on the bearers left arm reads: ‘comrades, think of me every now and then. when the law sentenced me, in desolate camps of the taiga, I lived under the name of ‘prisoner’.’ 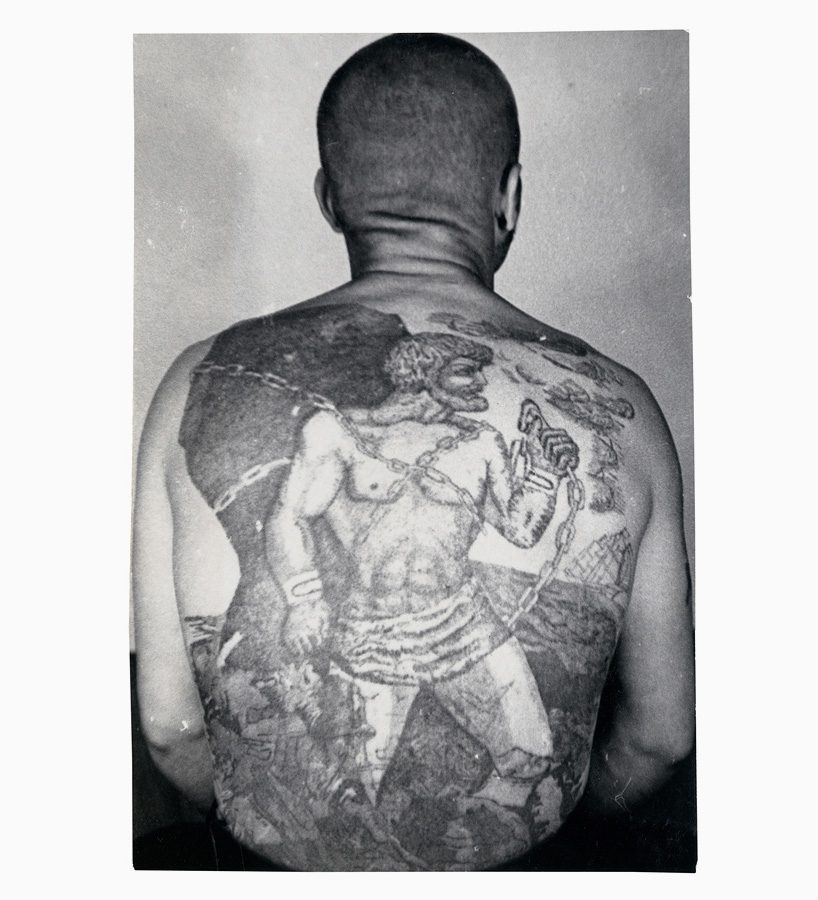 this tattoo is a variation on the myth of prometheus who, after tricking zeus, is chained to a rock in eternal punishment. the sailing ship with white sails means the bearer does not engage in normal work, he is a traveling thief who is prone to escape. 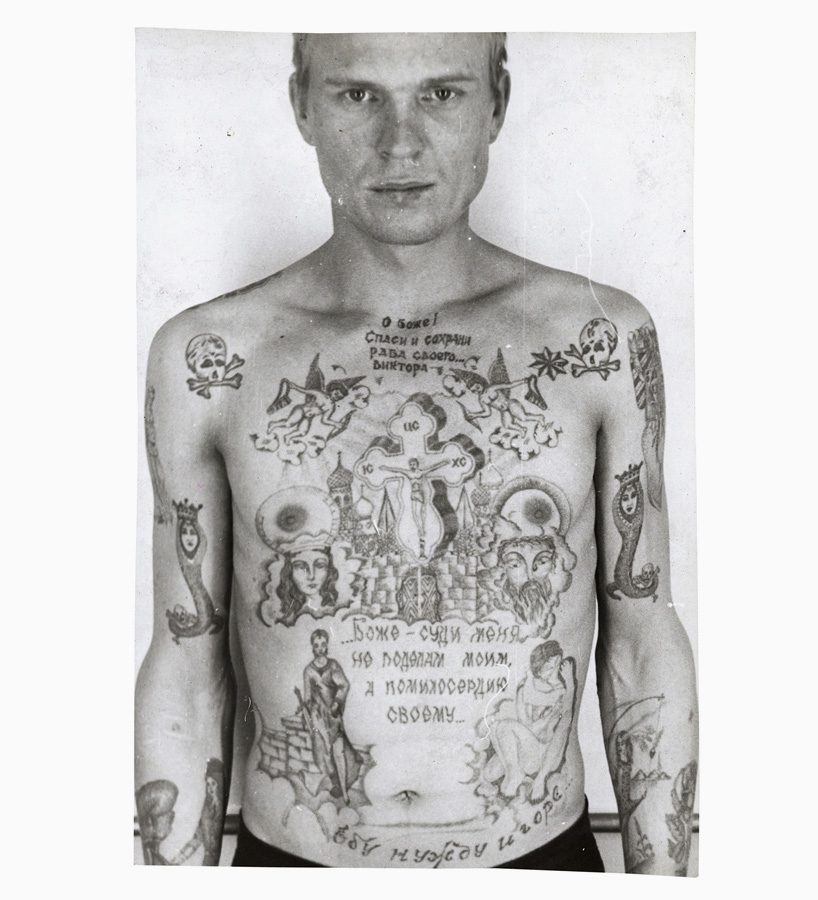 text above the cross reads ‘o lord, save and protect your servant viktor’, text beneath reads ‘god do not judge me by my deeds but by your mercy’. text above the waist reads ‘I fuck poverty and misfortune’. the skull and crossbones show that the prisoner is serving a life term. the single eight-pointed star denotes that he is a ‘semi-authority’ among thieves. the girl ‘catching’ her dress with a fishing line on his left forearm is a tattoo worn by hooligans and rapists. the snake coiled around human remains (positioned on the middle third of each arm) is a variation on an old thieves’ tattoo. the snake is a symbol of temptation; here the snake’s head has been replaced by that of a woman: the temptress. tattooed on the right side of the stomach is a version of judith (1504) as painted by giorgione: this is intended as a symbol of a scheming, seductive woman who betrays a noble man. 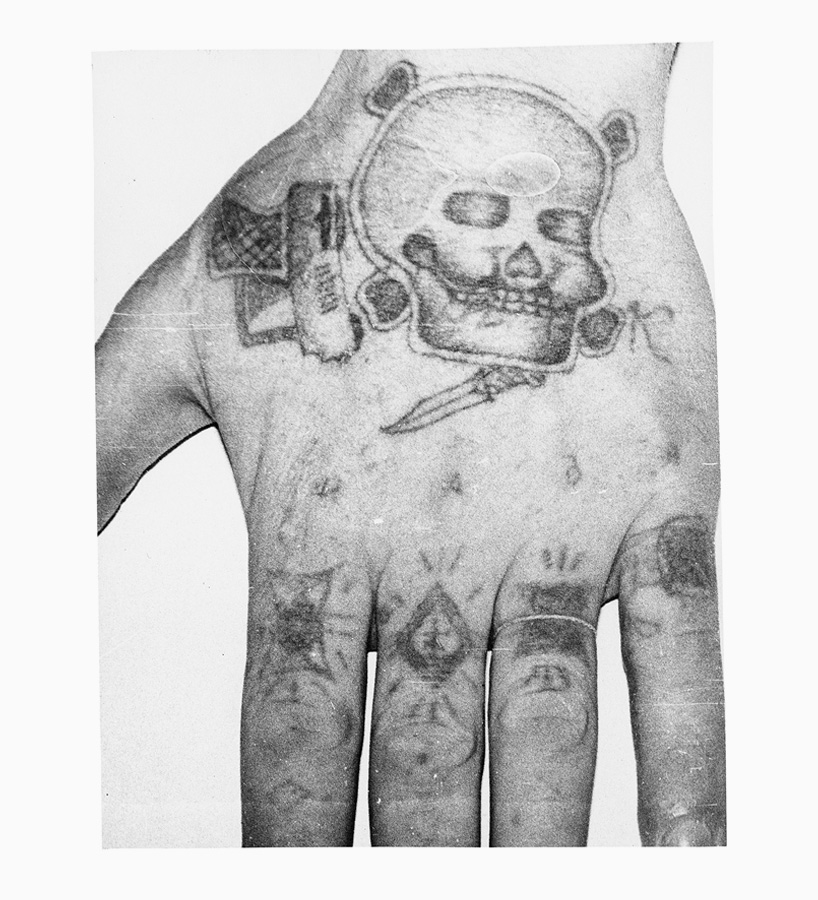 text across the knuckes reads ‘nadya’ (womans name). the ‘ring’ on the forefinger stands for ‘rely on no one but yourself’, a ‘patsan’ one of the most privileged inmates vtk. middle finger ‘the thieves cross’ of a pickpocket. third finger: ‘i served my time in full’, ‘from start to finish’, ‘went without parole’, the prisoner served his complete sentence with no remission for working with the system. little finger ‘the dark life’ the bearer spent a lot of time in a punishment cell. the skull and crossbones, gun, knife and letter ‘k’[iller] denote a murderer.