in addition to the realization of the murals, the artists had the opportunity to immerse themselves into and experience the various marine ecosystems of cozumel island, and learn from local experts about environmental challenges they are facing. the team also had the chance to both witness endangered sea turtles lay their eggs, as well as help release sea turtle hatchlings into the ocean.

throughout the event pangeaseed team members facilitated youth educational activities where the island’s local kids were able to learn about the importance of marine animals such as sharks, turtles, and dolphins whilst making arts and crafts from reclaimed materials. furthermore, a public screening of award-winning documentary film méxico pelágico attracted over 100 residents to the main square of isla mujeres. the film highlights the vast diversity of marine biodiversity in mexico, the challenges, and pioneering efforts to help sustain the health of the ocean ecosystem in mexico. 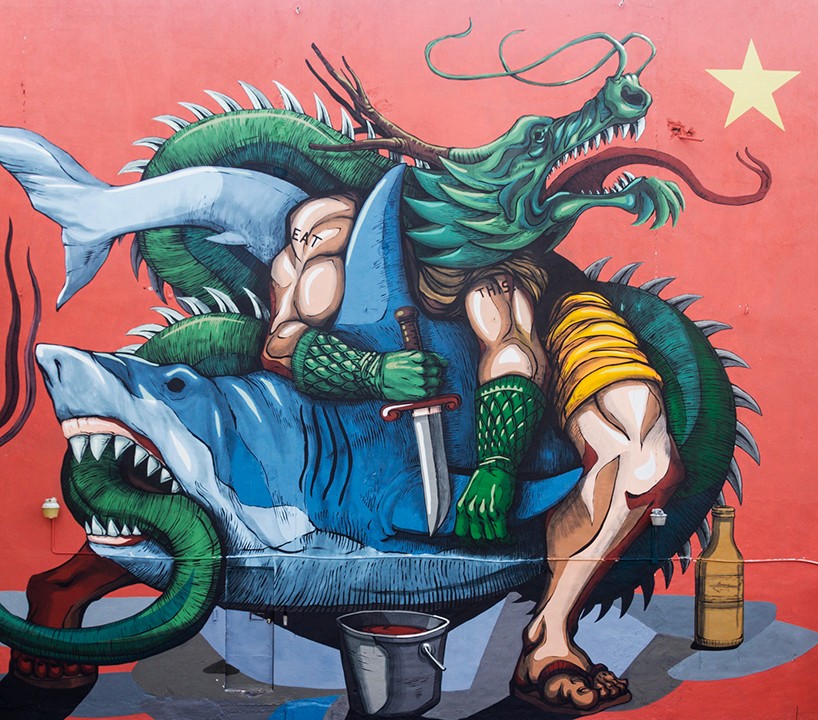 close up of the mural by jaz –  less than 10 people die annually due to shark bite. in stark contrast, up to 100 million sharks are killed annually for the global trade in shark’s fin. – and the un estimates global shark populations could become extinct in the next 10 – 20 years if current destructive fishing and consumption practices continue. toilets, vending machines and falling coconuts kill more people than sharks each year. rethink the shark. 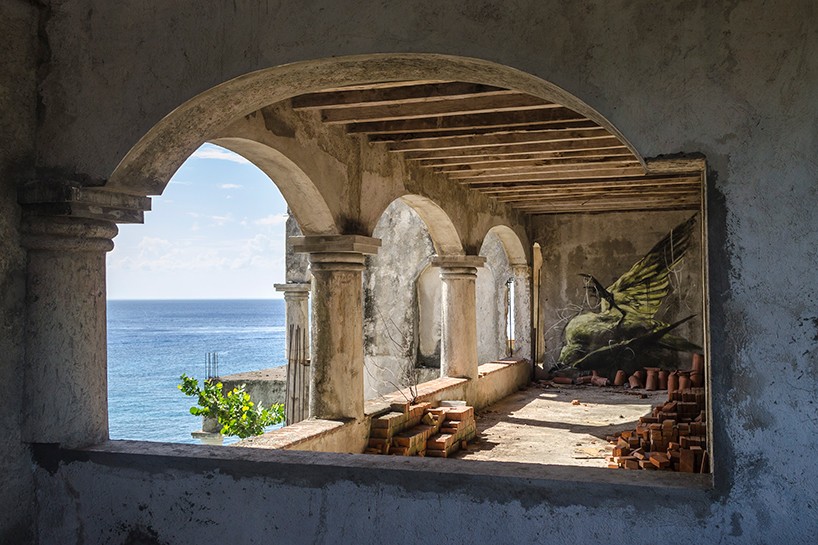 mural by faith 47 – photo by the stills agency – over the last ten years we have produced more plastic than during the whole of the last century. with the average american throws away approximately 185 pounds of plastic per year, enough plastic is thrown away each year to circle the earth four times. plastic in the ocean breaks down into such small segments, where pieces of plastic from a one-liter bottle could end up on every mile of beach throughout the world. 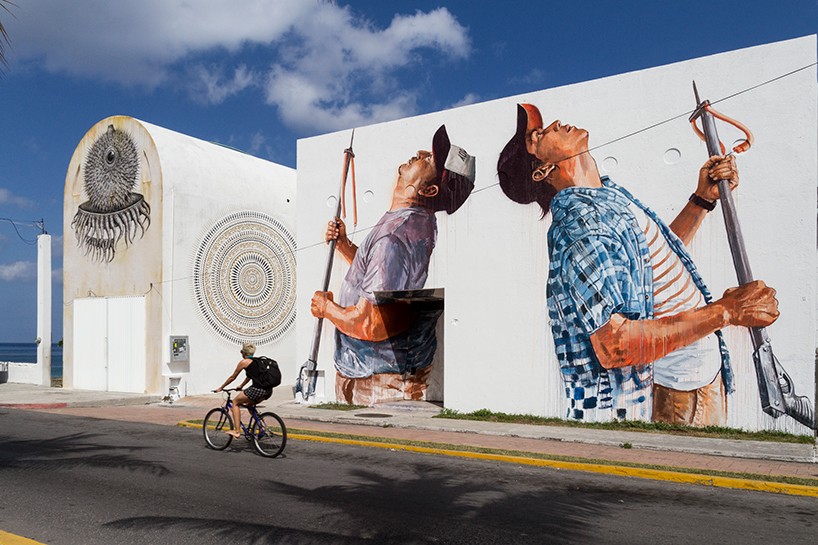 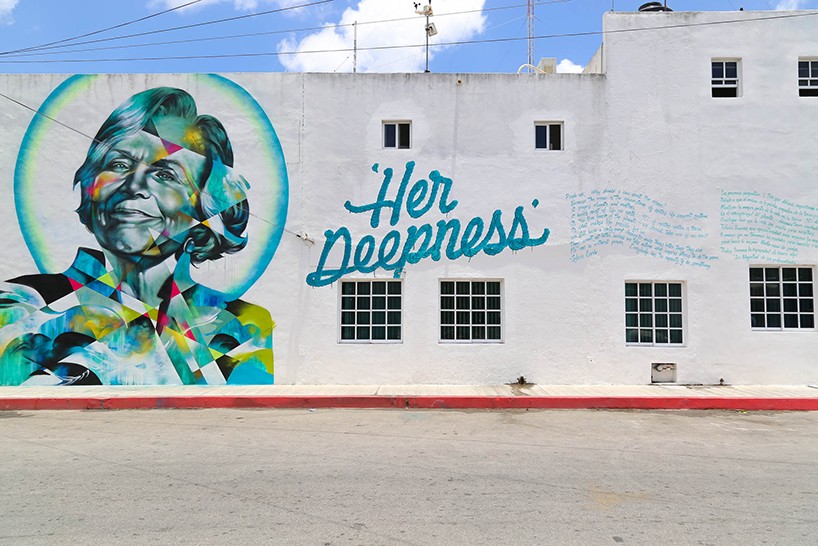 mural by hueman and jeff grass – photo by tre packard – tribute to american marine biologist, explorer, author, and lecturer, dr. sylvia earle. nicknamed ‘her deepness’ dr. earle has been a national geographic explorer-in-residence since 1998 and was named by time magazine as its first ‘hero for the planet’ in the same year. she was the first female chief scientist of the US national oceanic and atmospheric administration and won the TED prize in 2009. with TED’s support, earle launched mission blue, which aims to establish marine protected areas (or ‘hope spots’) around the globe. last year, the netflix documentary mission blue was released, focusing on earle’s life and career as well as her campaign to create a global network of marine protected areas. 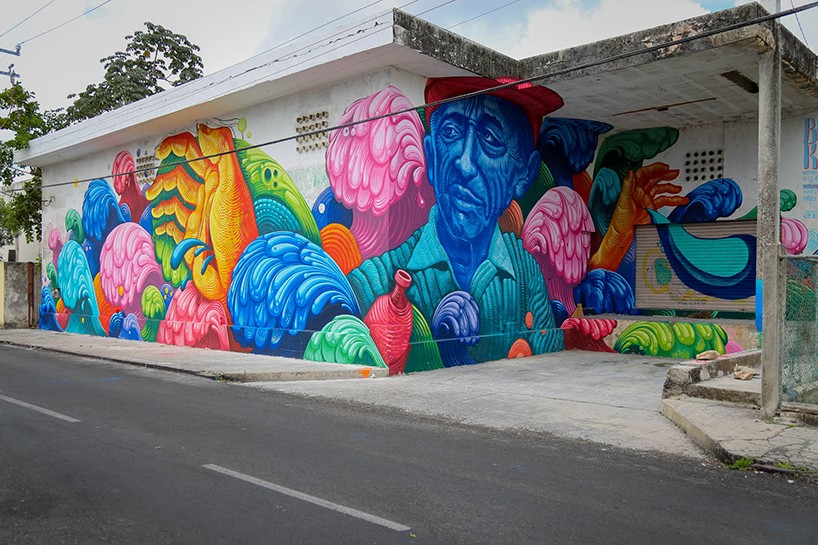 mural by jason botkin – photo by – tre packard – captain jacques-yves cousteau left his mark forever on the planet and the oceans. when cousteau and his teams embarked aboard calypso to explore the world, no one yet knew about the effects of pollution, over-exploitation of resources and coastal development. the films of calypso’s adventures drew the public’s attention to the potentially disastrous environmental consequences of human negligence. cousteau, through his life and his work, was a major player in the environmental movement. ‘when you enter the ocean, you enter the food chain, and not necessarily at the top.‘ – jacques yves cousteau. 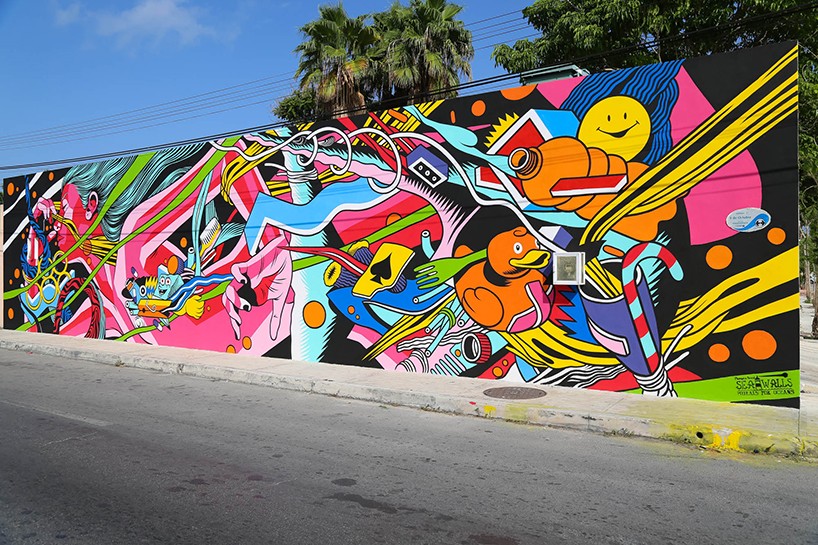 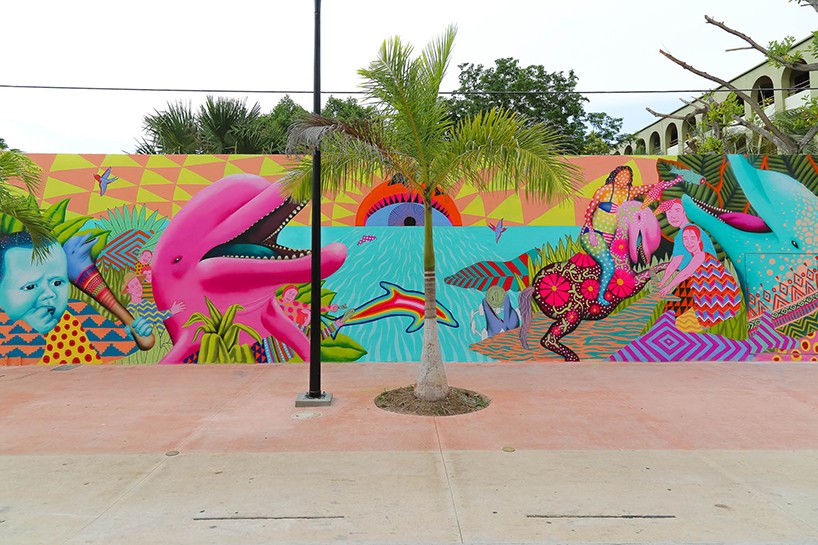 mural by aaron glasser – photo by tre packard – dolphins are highly intelligent creatures that live in complex social groups. wild dolphins can swim up to 100 miles a day, hunting and playing. in captivity they have very little space and cannot behave naturally, reducing their lifespan. 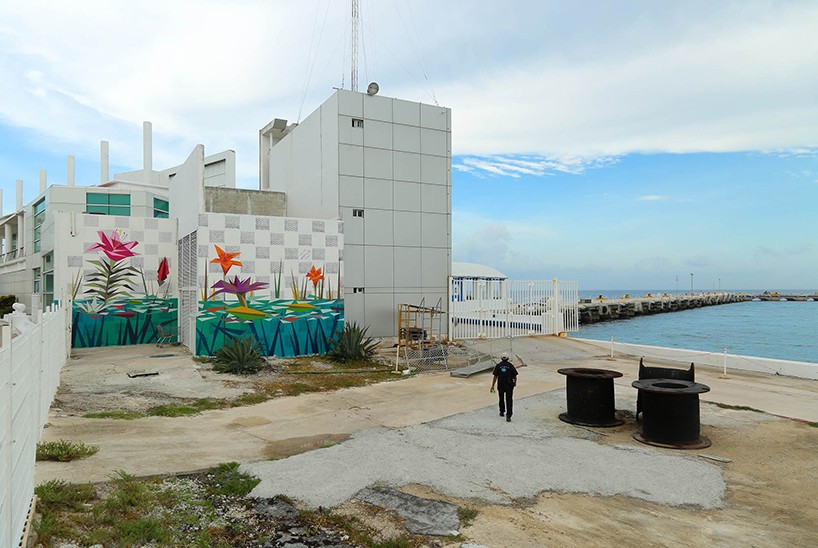 mural by naturel – photo by tre packard – the sheer number of people who use and depend on the ocean, and the sometimes unwise practices we adopt, have created problems such as overharvest of resources, reduction in biodiversity, and degradation of marine habitats and species, among others. we risk the very ecosystems on which our survival depends. no matter how far from the shore that you live, oceans still affect your life and the lives of your families and friends, classmates and colleagues. 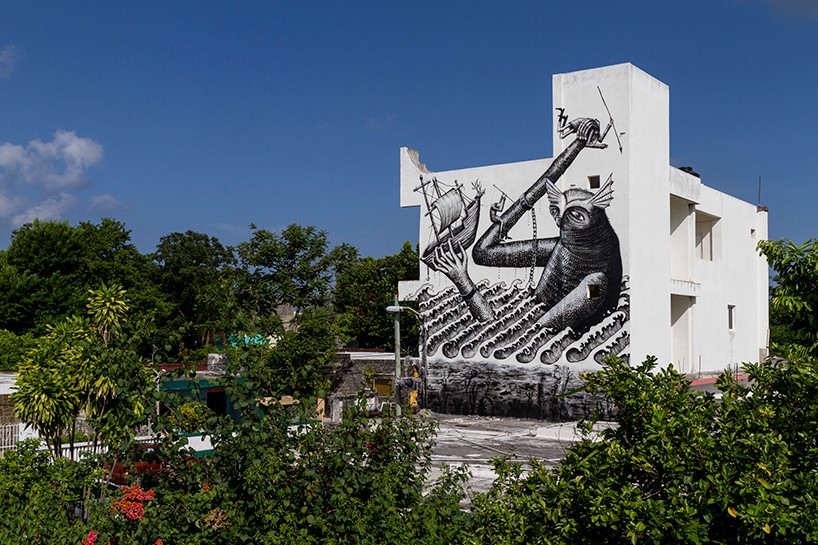 mural by phlegm – photo by the stills agency – our oceans have limits and in the past 50 years human impact, such as destructive fishing practices, have push the oceans to the brink. 90% of the oceans big fish, including sharks, tuna and marlin have been fished out. 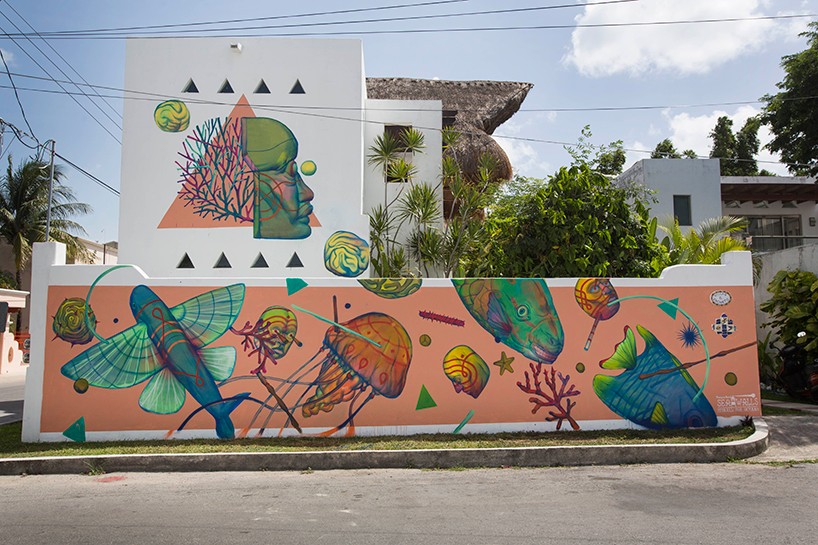 mural by smithe – photo by nate peracciny – over the last 50 years, caribbean coral reefs have suffered enormous declines in live coral cover. on average, coral cover on reefs of the region has dropped from about 50-60% to less than 15% today. a mixture of sponges, algae and bare substate now occupies the vacated space. the causes of these widespread declines in reef ‘health’ remain contested, although there is nearly unanimous agreement that the leading suspect is coral disease – ultimately stemming from human impacts. declining water quality, extensive coastal development, overfishing, and direct and indirect tourism impacts are all believed to have contributed to conditions favoring the growth and spread of coral diseases. 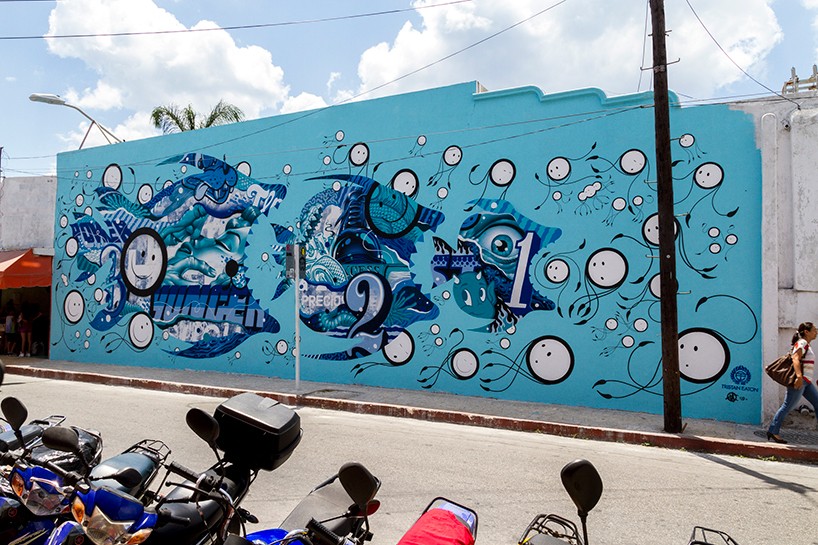 mural by tristan eaton x the london police – photo by the stills agency – with more and more coastal nations selling their fishing rights to the highest bidder, industrial fishing fleets are pushing small-scale fishing communities to the brink. as result, piracy and slavery are spiraling out of control in many nations that are dependent on traditional fishing for survival.

more about the project…
pangeaseed’s sea walls: murals for oceans is the first movement of its kind helping to save our seas via public art and activism. the festival featured over 50 contemporary artists from across the globe, collaborating to bring vital ocean environmental issues into the spotlight. sea walls: murals for oceans aims to educate and inspire individuals and communities to protect the planet’s most important ecosystem: the ocean.

‘the power of public art and activism has the ability to educate and inspire the global community to help save our seas. no matter where you are in the world, the ocean supplies us with every second breath we take and life on earth cannot exist without healthy oceans. with dwindling global fish stocks, rising sea levels, and widespread pollution, whether you live on the coast, in the city or in the mountains, we should all feel responsible for the health of the oceans and life that lives within it’ –  says pangeaseed executive director tre’ packard.

sea walls 2015 was hosted by pangaseed in collaboration with 1xRUN, tony delfino, and world art destinations.