new york’s times square has garnered the title of most-visited place globally, with 360 pedestrian visitors per day, which adds up to over 131 million visitors a year. sometimes its referred to as ‘the crossroads of the world’, where more than 100 variously sized jumbo screens compete to catch people’s attention for the products or services they’re advertising. each one is characterized by their short time frames, bright lights and colors, camera movements, fast editing and strong motion graphics; thus times square billboards are considered the most coveted and costly ones around, affordable only by the biggest commercial brands, playing 24 hours a day, 365 days never stopping… 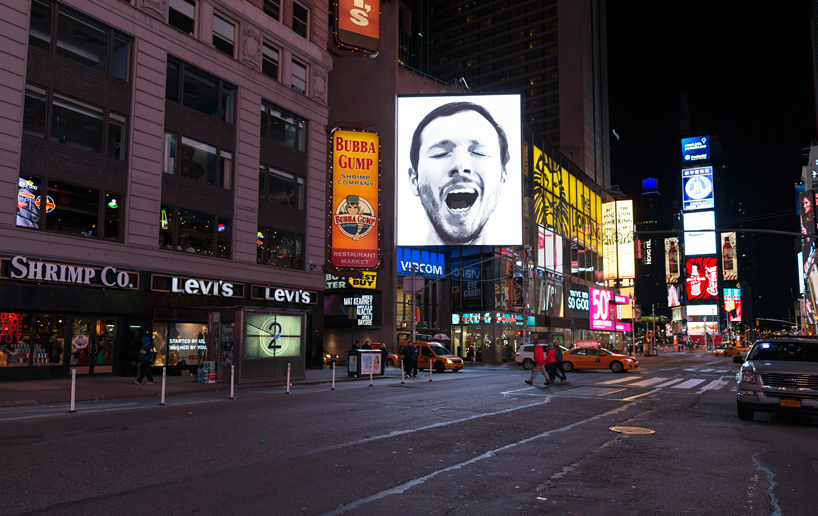 sebastian errazuriz responds to this continuous blitz of imagery with a public art piece. ‘a pause in the city that never goes to sleep’ is a site specific video installation which sees the errazuriz contrasting the rush and buzz of times square with an extremely slow-paced black and white moving image, depicting a close-up of the artist himself looking around and yawning multiple times throughout the 3-minute duration of the video — no camera movements, no editing cuts and no motion graphics. errazuriz yawning at an unhurried pace, juxtaposed with the flashy signs and billboards, make him standout amongst the visual and physical hustle and bustle; and momentarily he dominates and takes centre stage. his presence draws many of the visitors looking at the screens, suddenly coerced into joining in the act of yawning as well, triggering a domino effect of involuntary tiredness among passersby. 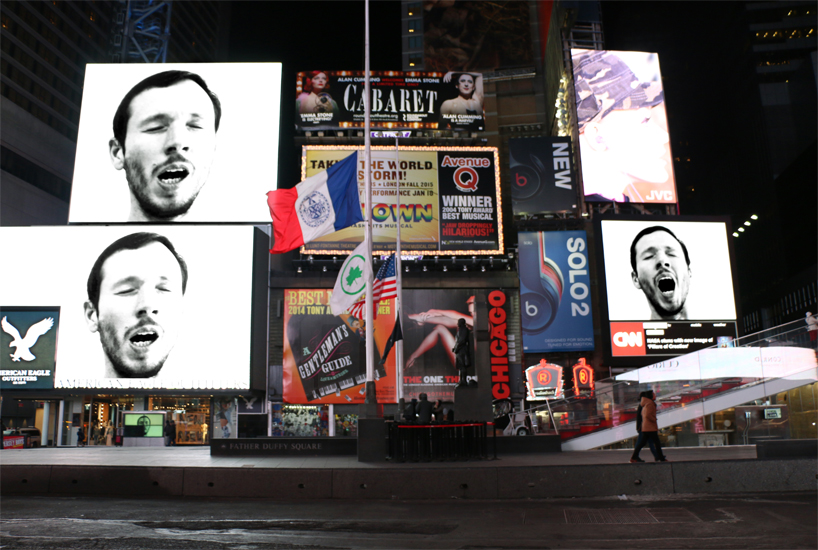 taking place each night at 11:57pm for the month of january from 42nd to 47th streets, between broadway and 7th avenue, the public art piece commands approximately 50 electronic display boards, and can be interpreted as ‘a peaceful and personal act of protest by the artist against the overwhelming marketing that surrounds him‘. the contagious behavior of the yawning seen in the video seems as if it has been designed to purposefully get others to join errazuriz, as if they have voluntarily gathered together each night in times square, to protest with him. 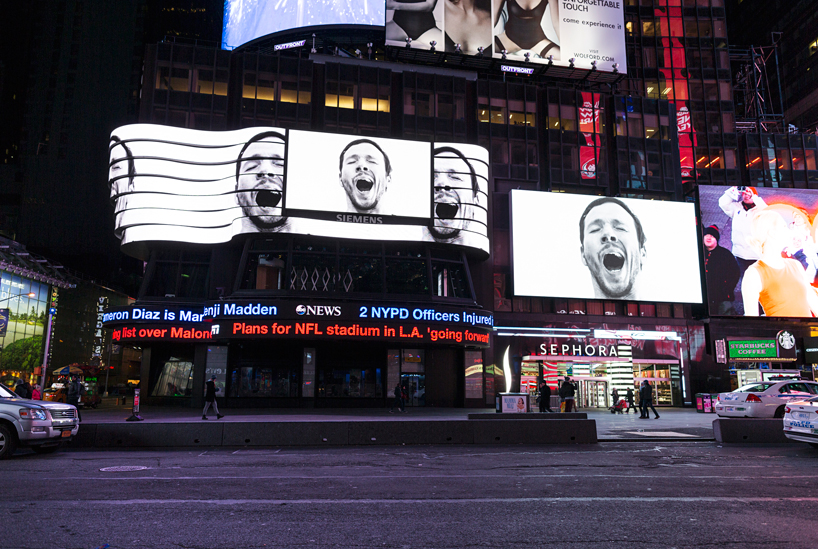 ‘I hope that the video can offer a brief moment of pause that can remind us of our urgent necessity for free space and time that can allow us to recover a stronger sense of awareness. (…) I am yawning at everything and all of us; we need to wake up.’ – sebastian errazuiz 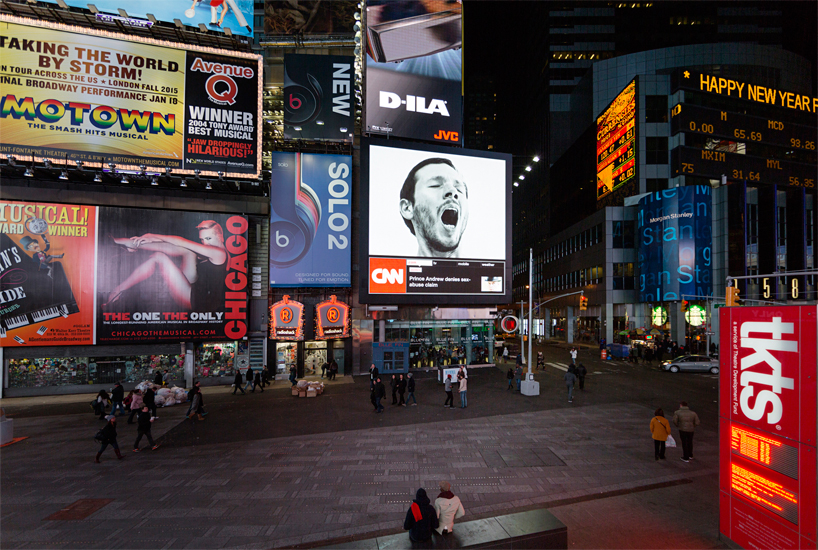 ‘a pause in the city that never sleeps’ is being displayed as part of a monthly presentation delivered by the times square advertising coalition (TSAC) and times square arts, additionally supported by PS122 and COIL15.

‘a pause in the city that never sleeps’ by sebastian errazuriz from designboom on Vimeo. 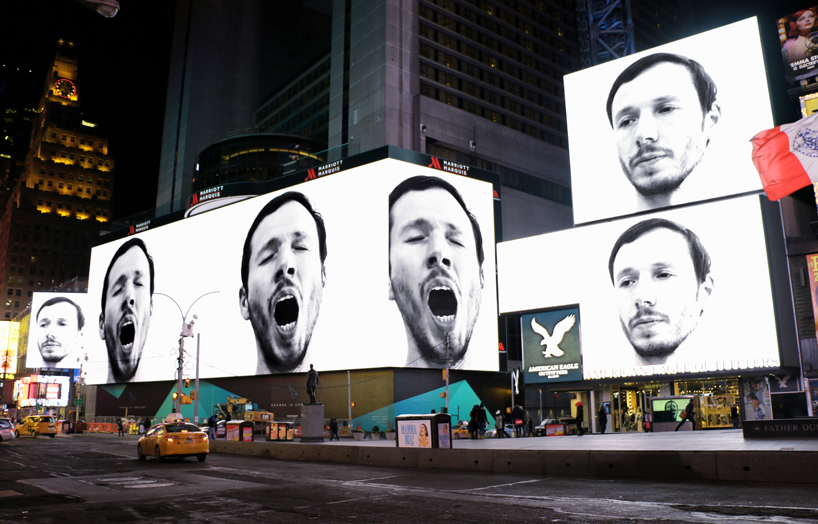 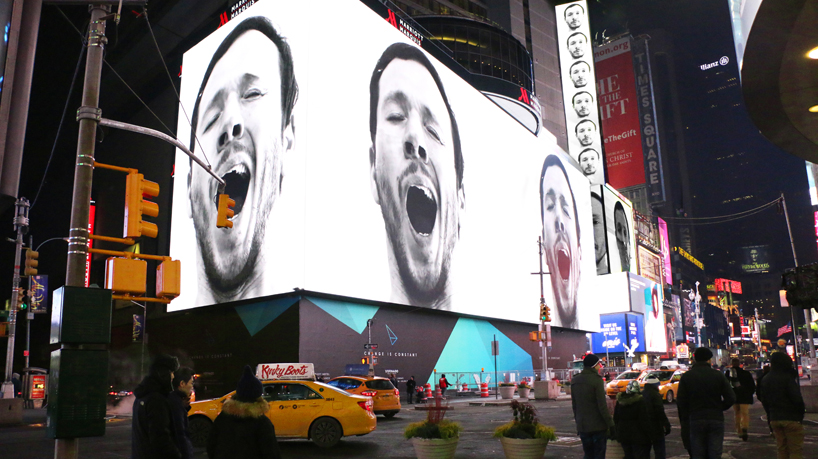