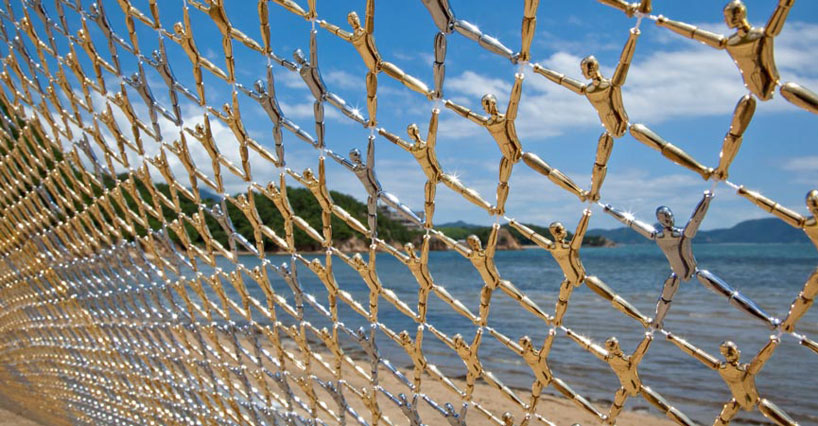 the seto inland sea of japan has been an important nexus of transportation. boats from the mainland have come and gone, bringing new cultures and lifestyles to the islands which dot the sea. since then, each island has formed its own culture. however, globalization and increased homogenization has caused the islands to slowly lose their characteristics due to the aging and decreasing population of the islands.

setouchi international art festival 2010 aims to bring vitality back to the islands of the area. the event features the work of 75 artists, from 18 countries and regions who bring forth new discoveries in the workings of our daily life. the islands have become the stages, through which elements of life related to art, focusing on the islands’ lifestyles and history, are exhibited.

suh do ho has created ‘net-work’, a system of tunnels covered in fishing nets near the dobuchi strait, angel road and the beach near tomioka hachiman shrine. at first glance, there appears to be fish drying in the nets, but upon closer observation, the installation reveals that they are spread-eagled human figures connected at the hands and feet. 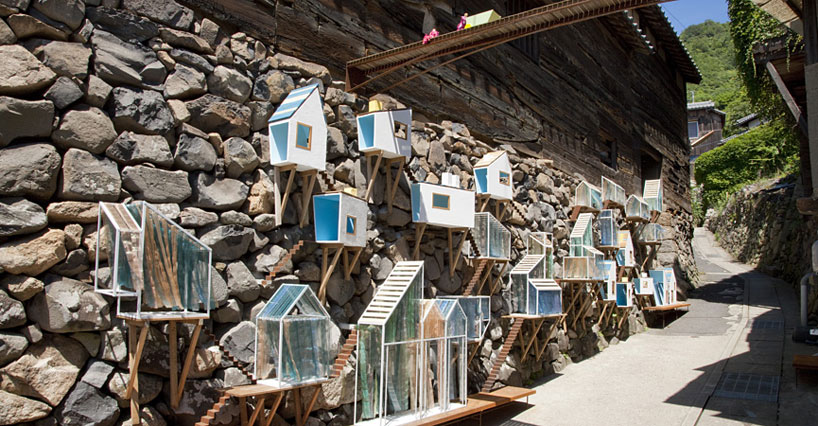 nakanishi nakai ‘a town between the sky and the sea’

‘a town between the sky and the sea’ by nakanishi nakai (architect hiromu nakanishi and landscape designer takeo nakai) is a reproduction of the landscape of ogijima. built against a stonewalled lane overlooking the sea, meant to representa gorge, the duo has created a microcosm, one-eighth its actual size. 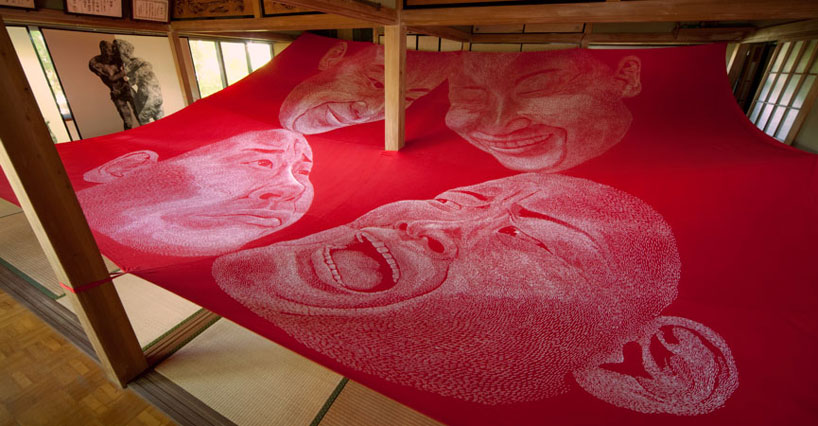 ‘birth-sex-live-death-house-legend’ by yoshio kitayama, is installed within a shrine, dedicated to the god safe of child birth, located at the top of the hill in ogijima. kitayama, whose works center on themes of life and death, presents paintings and an installation which draw on the legends of the shrine. 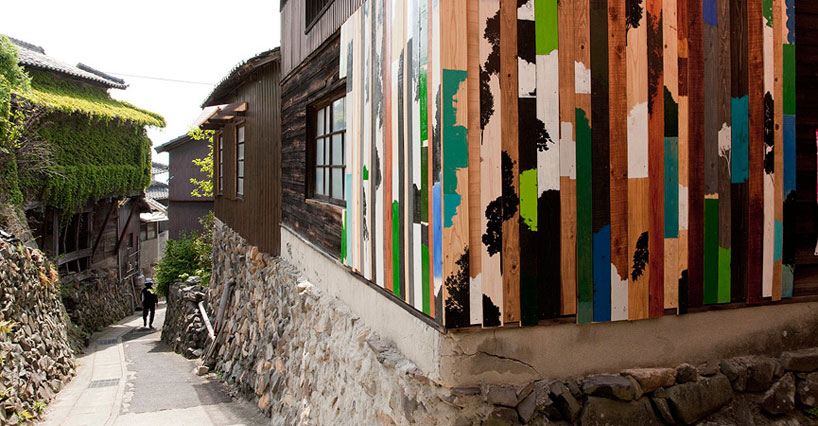 rikuji makabe has created ‘project for wall paintings in lane, ogijima wall alley’, a series of site-specific installations on various buildings located throughout the ogijima village. the wall murals are constructed from scraps of wood, materials discarded from ships etc., each of the panels are affixed to the exterior walls of the island homes in strategic locations so that the murals become part of the island scenery. 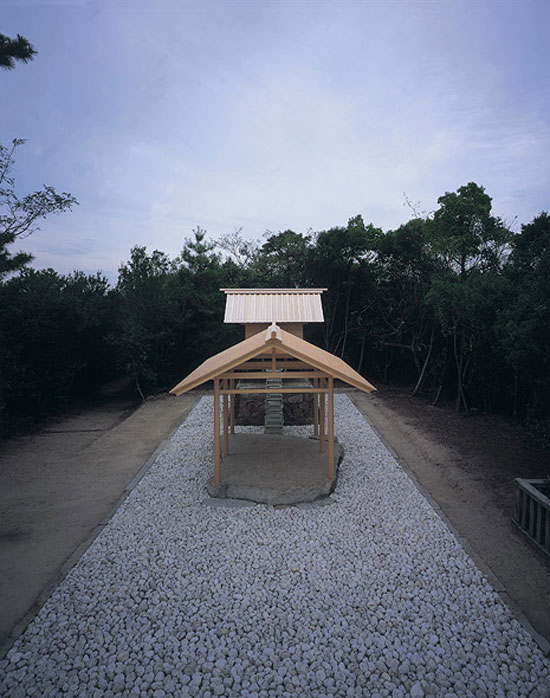 for his contribuation to the festival, hiroshi sugimoto has restored the sanctuary and designed a new worship hall for an existing shrine in naoshima. entitled ‘go’o shrine / appropriate proportion’, a glass staircase connects the shrine’s main building to an underground stone chamber. 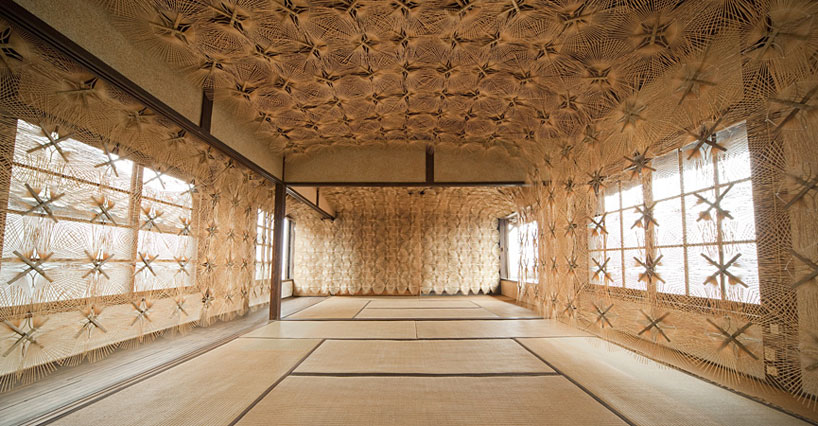 for ‘uchiwa bone house’, takashi nishibori focuses on the traditional kagawa handicraft of the uchiwa fan. utilizing the bamboo frames of numerous fans, he explores light and wind, inside and outside, island life and scenery, the relationship between tradition and the present. 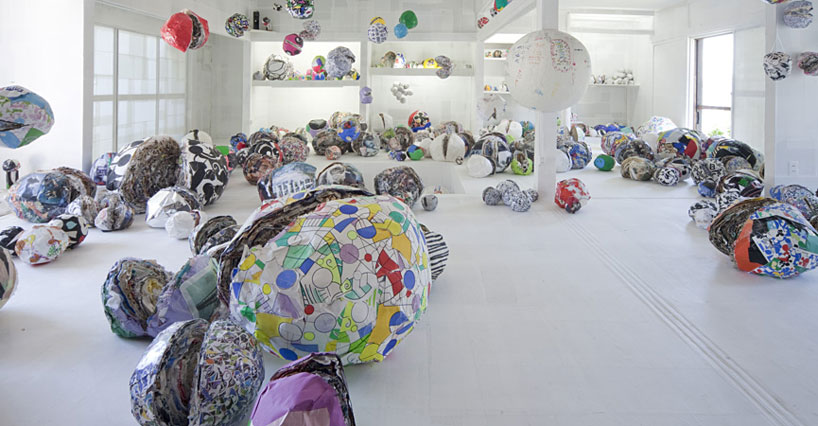 ‘memory drops’ by takeshi kawashima & dream friends, are colorful, spherical works predominantly constructed from flyers, magazines, old newspapers and wrapping paper. some drops are made with the islanders out of their letters, diaries and other papers crammed with precious memories. installed within the entrance, corridors, walls and under the eaves of the exhibition space, visitors are invited to make their own memory drops, some of which will be added to the installation as the festival progresses. 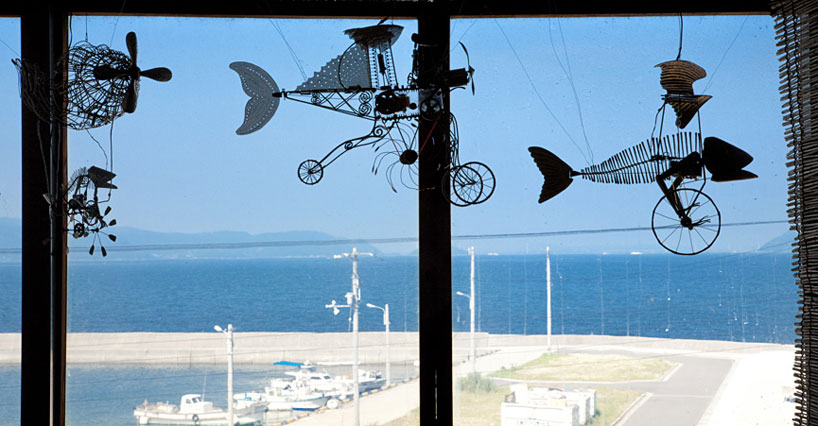 takashi imura is an artist known for his ‘karakurin’, imaginary sea creatures made from copper and bronze. on the island of ogijima, a number of these mechanical objects are hung at madoka, a restaurant that serves cuisine made from local seafood. by displaying these creatures in this location – by the windows and on the terrace – the ‘karakurin’ fuse with the scenery of the seaport. 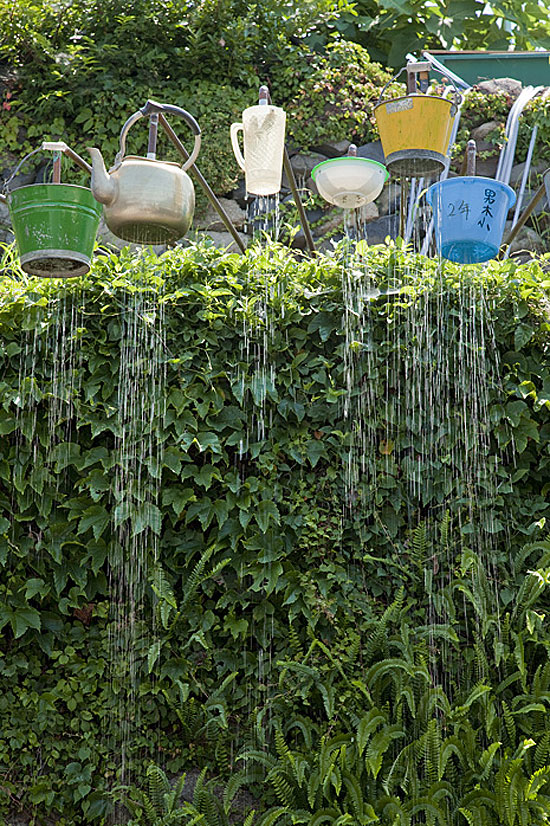 kyoko taniyama’s ‘rainy lane’ consists of washbasins and buckets which have been hung, periodically releasing a shower of water, making it look like its raining, even on a sunny day. in the past, water was so scare on ogijima, that islanders had to haul it from a well at the top of the hill. taniyama’s installation reminds us of the importance of water and its relation to island life. 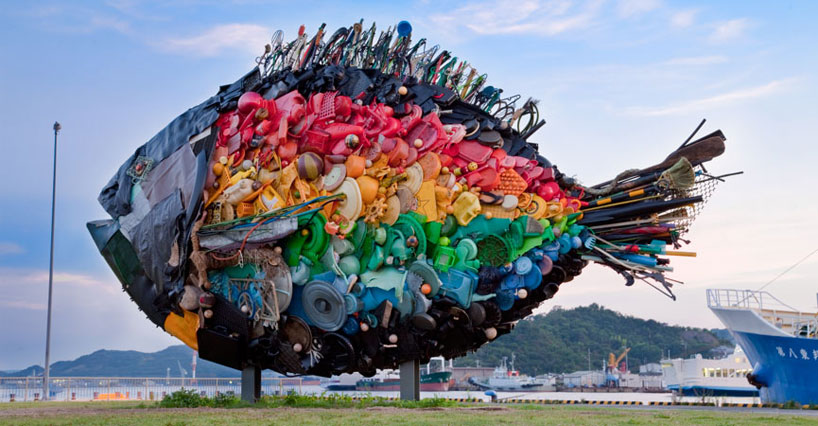 yodogawa-technique‘s (hideaki shibata + kazuya matsunaga) ‘black porgy in uno’ is a giant, life-like fish built from flotsam and jetsam, washed up on the shores along the seto inland sea. much of the garbage collected not only originated in japan, but also in other parts of the world. 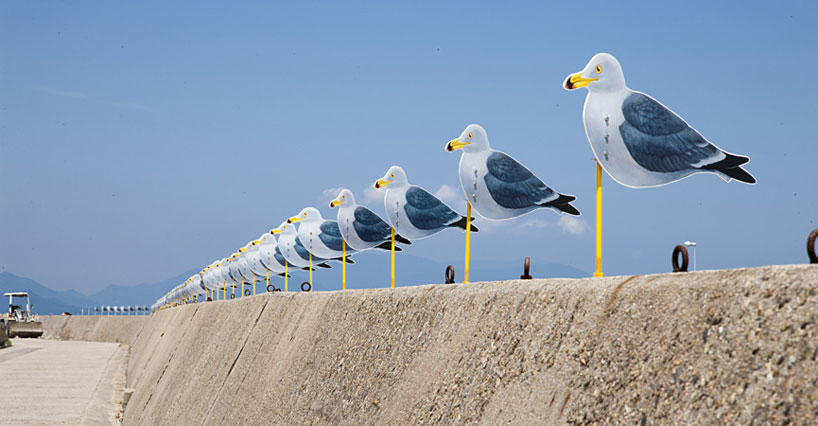 ‘sea gull’s parking lot’ responds to its site location which is fishing port. takahito kimura has placed a host of weathercocks here, so that when the wind blows in from the sea, they all turn simultaneously, giving the invisible wind a visible form. the work is mean to bring visitors’ attention to the natural phenomena that surrounds the island. 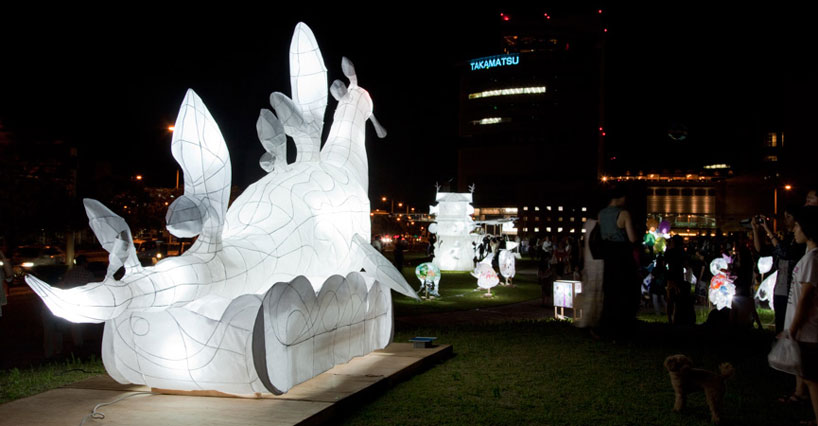 for the festival, various local groups, working under the direction of noboru tsubaki, are collaborating to create large illuminated sculptures, some which appear as mythical creatures, situated in central takamatsu near the island’s station and port. 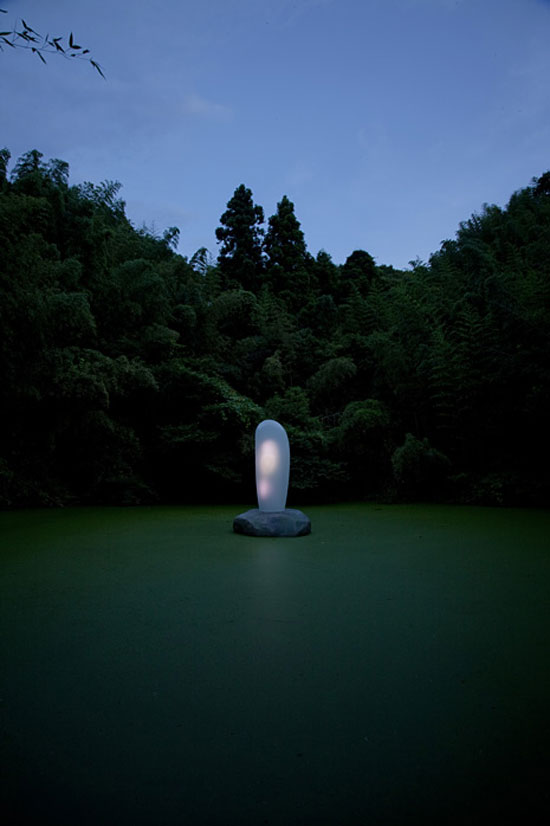 in ancient celtic lore ‘tom na h-iu’ was a place where souls waited to pass on to their next life. drawn to this myth, mariko mori has developed a contemporary glass monument. networked to the super-kamioka neutrino detection experiment, her work responds when the local observatory captures a neutrino, such as those emitted by a dying star. when a neutrino is detected, the work emits a luminous light. 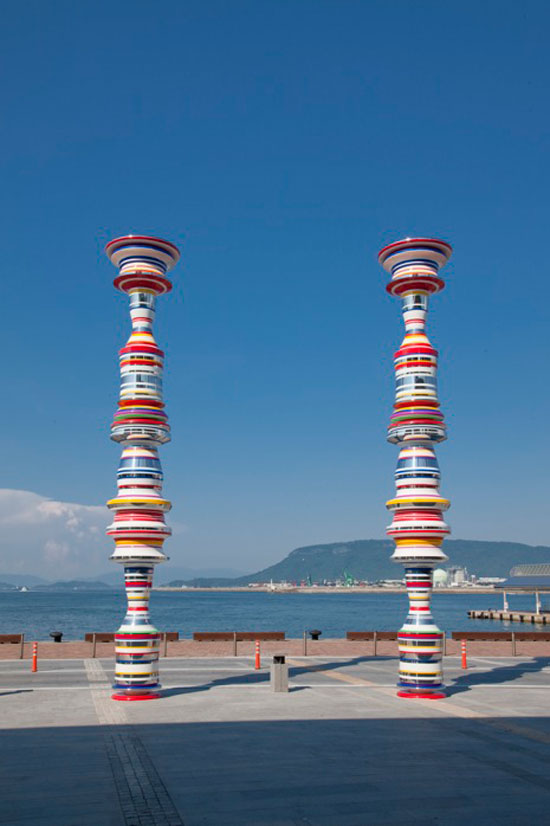 shinji ohmaki‘s installation ‘liminal air- core-‘ consists of pillars with mirrored surfaces that capture the changes that occur in light and color throughout the day. their appearance alters, depending on the angle and time of day in which they are viewed. their location serves as a gateway to the world of takamatsu’s port’ 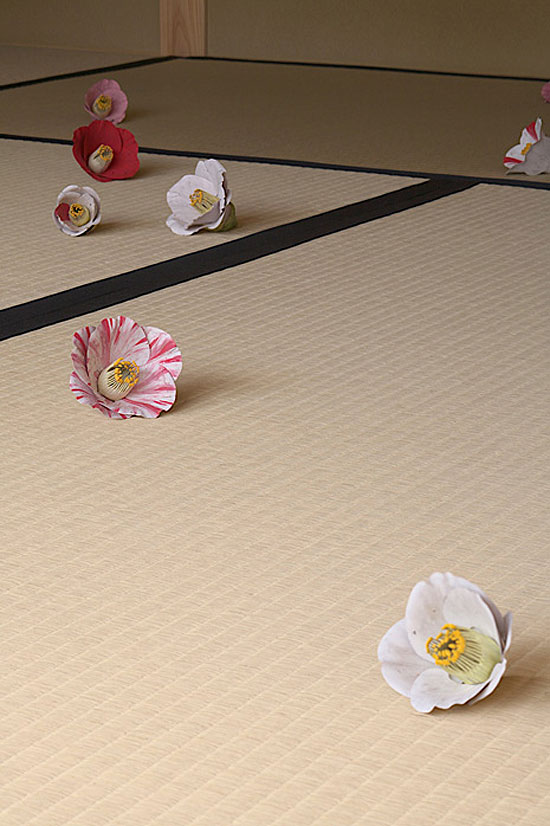 the name of the site, ‘gokaisho’, is derived from the fact that local villagers used to gather here to play ‘go’, an ancient board game. the art space’s interior is strewn with yoshihiro suda’s camellia blossoms which have been carved from wood, paralleling the five-hued flowers of the camellia tree that is planed in the site’s garden.

for his latest work, the artist has taken to the streets of berlin to show the impact digital technology has on the physical world.

for his latest work, the artist has taken to the streets of berlin to show the impact digital technology has on the physical world.