histories and biographies are written, rewritten or faked. with a british mother and a japanese father, artist simon fujiwara unfolds a practice that is ostensibly a ‘journey of personal discovery’ which touches on themes of ethology, eroticism, architecture and ancestry. 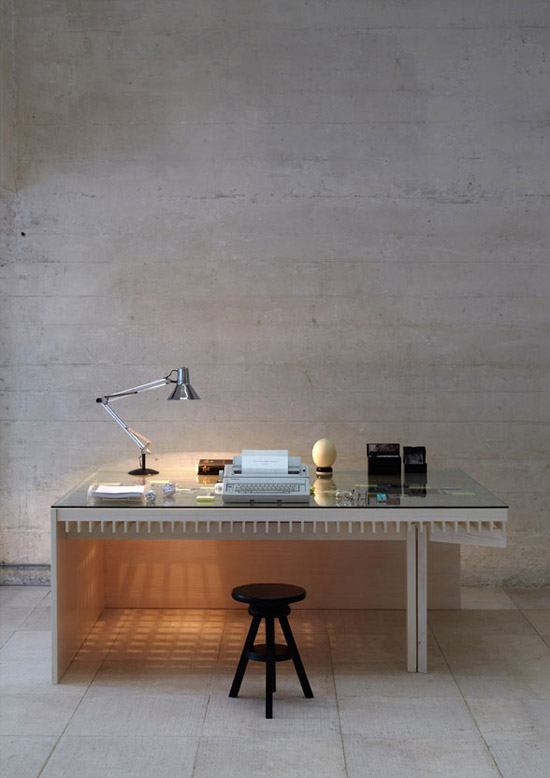 in the recent projects of fujiwara, he questions the possibility of manipulating history and affecting collective memory through the individual tales and anecdotes he tells. his passion for constructing stories and his love of writing and writers are all evident in his narrative work. he references cacophonous dialogues and contradictions in the movies of john cassavetes, woody allen, ingmar bergman. 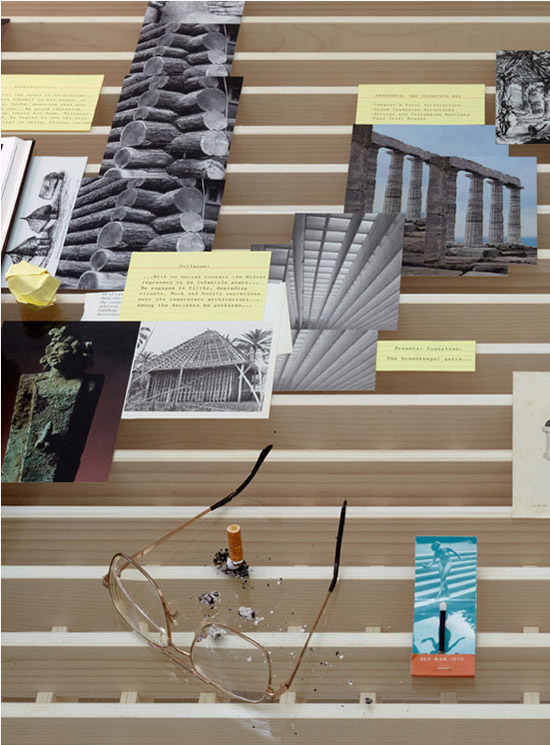 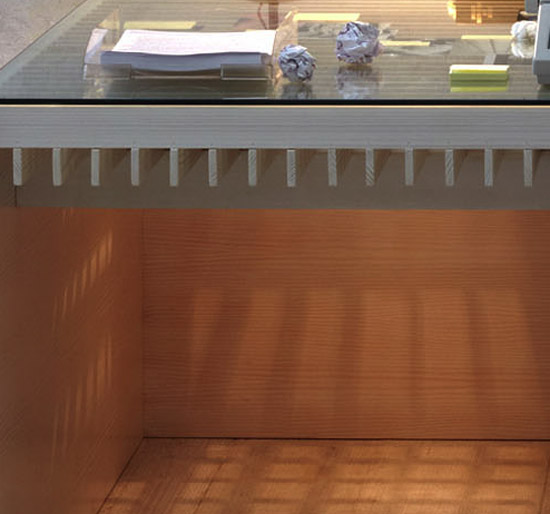 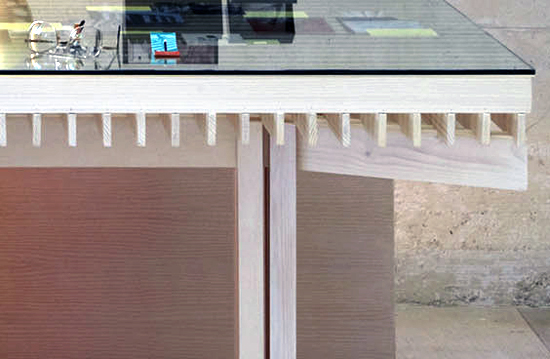 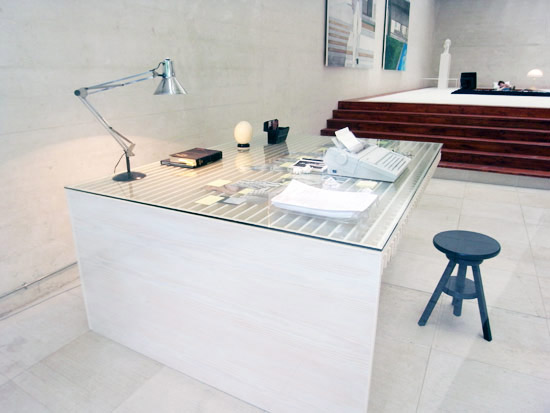 ‘desk job’, installed in the exhibition ‘the collectors’ in the nordic pavilion at the venice art biennale 2009
image © designboom 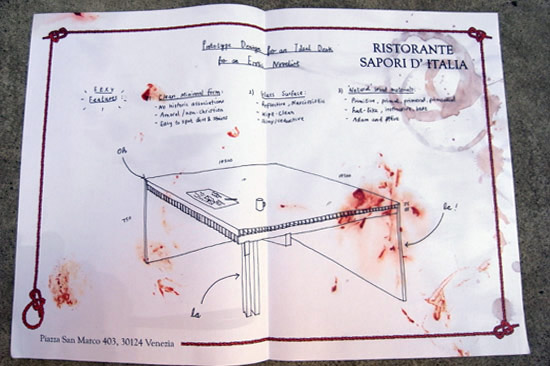 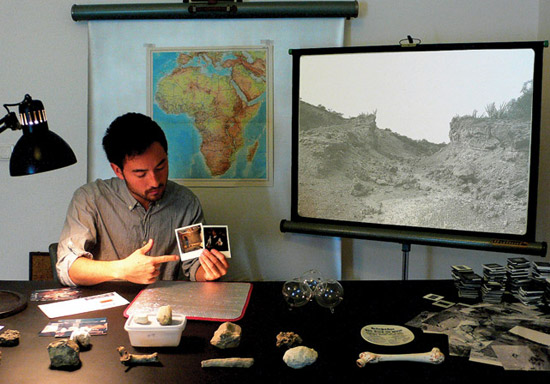 ‘the museum of incest: a guided tour’, simon fujiwara in 2009

‘the museum of incest’ (2007–ongoing) is an exploration of human incest. fujiwara reflected on his own relationship with his father which was far from incestuous. instead the project was initiated after his visit to the burial site of the earliest human ancestors in the olduvai gorge, tanzania. it seemed to him that these small tribes could only have willed their own survival through incestuous relationships. if inbreeding played such a pertinent role in both the economic and personal survival of early humans species, fujiwara questions if incest should be considered an unnatural practice.

‘the museum of incest’ is a multipart project. encompassing formats such as performance lectures, published fiction, and collection of various articles and artifacts, the project appears as a trail of scattered evidence. each unearths an implicit myth of human origin and an explicit sexual archeology which together weave narratives that take us from our shared and most distant past, to the up close and personal with fujiwara and his family history. it includes three tableaux which references the concept of incest – ‘ancient’,’modern’ and ‘middle ages’ (here actors portray the last days of sodom and gomorrah). the lecture performance is completed by an underground gallery and café. this absurdist building looks at ancestry and the sexualization of family as central themes for education and entertainment. fujiwara’s mischievous museum is wilfully spurious, a visitor’s attraction where human sexuality and identity are rendered gloriously ambiguous. 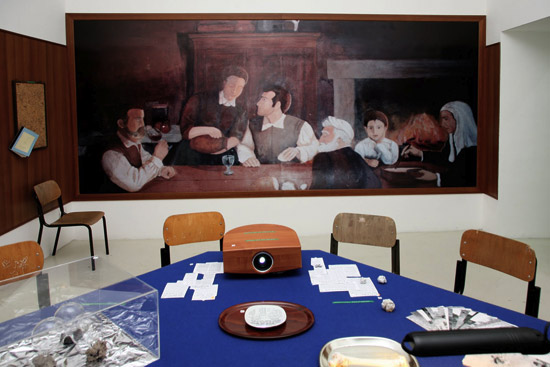 a reproduction mural of a family scene, originally created by fujiwara’s father, is used as the backdrop of his lecture performance. the artist has also published a text in the form of diary entries supposedly written by the renowned archaeologist louis leakey who seems have discovered the incestuous history of olduvai gorge in 1950s. 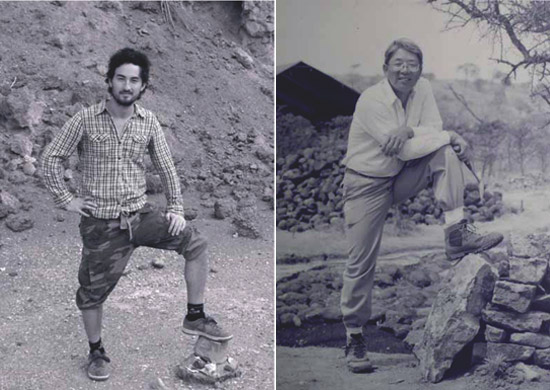 ‘ancestral grave digg – a site survey for the museum of incest’
(simon fujiwara in 2007 and his father in the same place in 1970 ca.)
image courtesy simon fujiwara

fujiwara has taken the fossil-rich olduvai gorge in northern tanzania, a site often referred to as ‘the cradle of mankind’, as the starting point for his proposed museum. ‘it began with an expedition to the ‘cradle of mankind’, the archaeological site in africa where ‘first man’ was supposedly found. this was the missing link that sent the church crazy because it was used as proof that first man was not human, but an ape and worse still an african. the idea that this race-less ape could cause all these political problems three and a half million years later was comical to me – being categorically ‘race-less’ myself – so I decided I wanted to go to the site and see it for myself.‘ – SF ‘ancestral grave digg – a site survey for the museum of incest’ is an installation that seemed to mimic an interrupted lecture or a dysfunctional archive which appeared to be either half finished or semi vandalized. slides of the purported expedition were scattered on the floor or were projected on a screen. 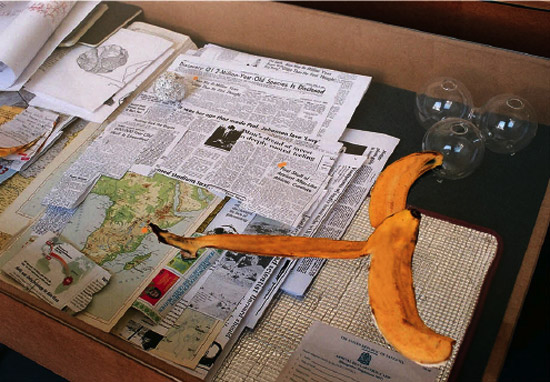 several display cases, filled with spuriously labelled items as well as maps, drawings, newspaper clippings with headlines such as ‘man’s dread of incest is a deeply rooted feeling’ and ‘600,000-year-old skull is unearthed’. meanwhile, slippery clues such as a banana skin lay alongside a model of the ‘controversial’ new museum. the proposed form of the museum itself, three interlocking spheres, is taken as if in an act of creative inbreeding from a design for a goldfish bowl, conceived by the artist’s father. 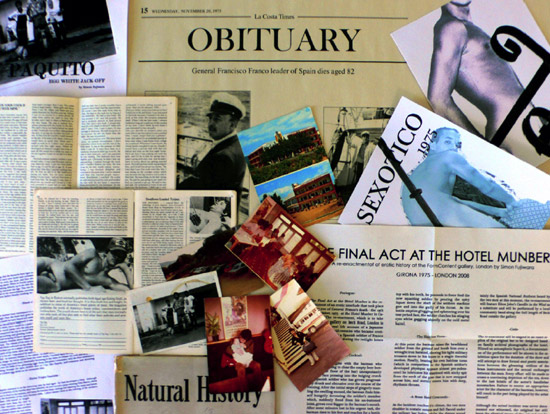 ‘welcome to the hotel munber’ springs from fujiwara’s re-imagining of his parents’ life running a hotel on the costa brava during the 1970s. ‘the hotel munber was a touristy hotel in catalunya that my parents owned and ran in the 70’s during the last years of the franco dictatorship. my parents told endless tales of violence and oppression, set against a backdrop of sangria and flamenco. I always imagined it like a novel, the characters, the setting – it was exotic and vibrant to me. when I started to seriously think about what kind of book I could write, I placed myself in that time, I tried to imagine how a gay, mixed-race young man would feel about life in a homogeneously white dictatorship.‘ – SF 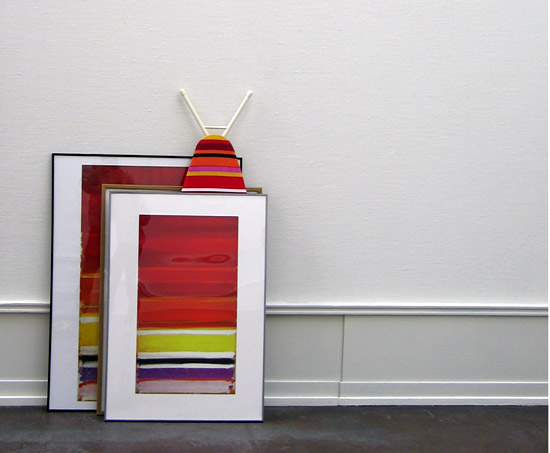 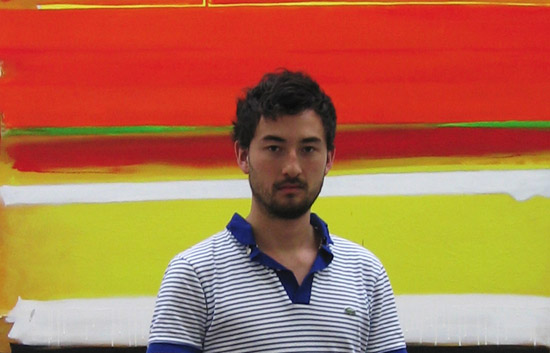 simon fujiwara was born in 1982 in london, UK and currently lives in berlin and london. shortly after receiving a degree in architecture at cambridge university, simon went straight on to a two-year fine art course at the staedelschule in frankfurt. he has recently been an artist in residence at the MAK center for art & architecture, schindler house, los angeles (2008–2009). he also participated in the exhibition ‘office of real time activity’, curated by graduating students of the MA curating contemporary art at royal college of art in london (2009). his work was part of a group show ‘the collectors’ at the danish and nordic pavilions, during the 53rd biennale di venezia.

simon fujiwara’s work is currently part of the exhibition ‘tutta la memoria del mondo’ (all the memory in the world) at the modern art gallery in turin, italy. it will run from february 25 to may 23, 2010. 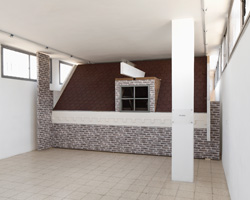 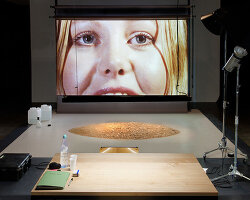 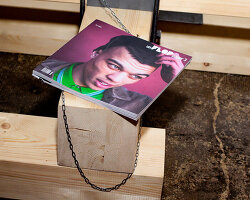 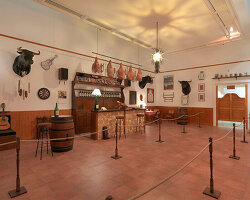