time becomes the key director of a series of images created by california-based artist jay mark johnson. the striking photographic artworks appear to be photoshopped, however, the pronounced effect is achieved through a specially built slit camera that emphasizes time over space. motion manifested as a moving car, a dancer or crashing waves is translated into sweeping bands of color as the movement passes by the camera. similar to an EKG showing sequential heartbeats, an object is registered by the rate of movement as opposed to distance or size so that viewing the image from the left side is effectively viewing backward in time. the project began when johnson purchased an US85,000 rotating slit-scan camera for high-resolution panoramas and noticed the accidental peculiar effects the device was capable of, from this he tested stopping the rotation and focusing in on one small area.

the slit camera in a fixed-position registers only a moment of a scene – represented visually by a vertical sliver. over a period of time, which johnson can control, the photographic method records line after line of his moving subject – resulting in a composite series of strips. this means that an object taking a long time to pass the lens would appear stretched across the canvas, whereas a fast moving subject would appear scrunched up.

johnson says he wants to expand our view of reality through his work, describing the philosophy behind the concept:

‘it shows us that what we see is a product of our cultural traditions and means of perception.’

‘swept away #2‘ from the belgrade series

‘carbon dating #1’ from the hazard series

‘swept away #1’ from the belgrade series 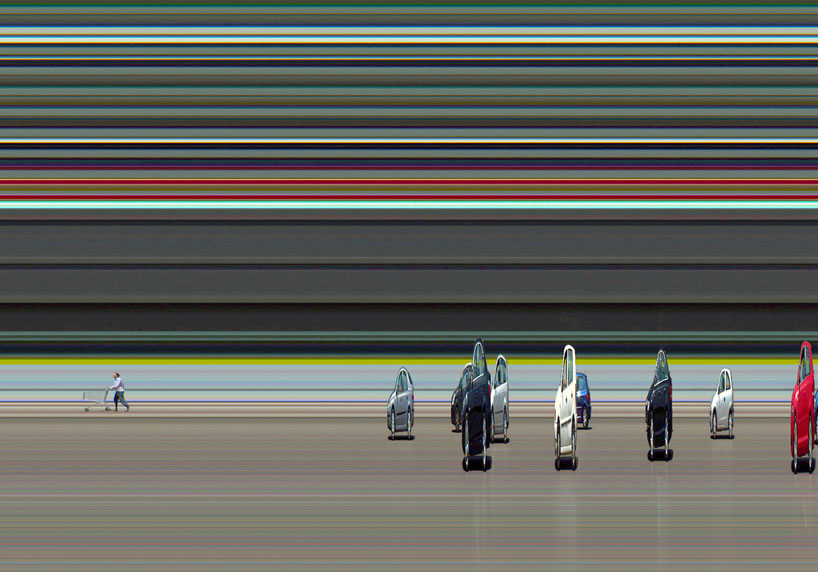