alexander iolas’ polyvalent personality is vividly transmitted in the ‘iolas shelter’ installation. the tribute temporary installation is an interactive space creating a hybrid between an archive, a boudoir, a cenotaph and a hideaway, in line with iolas’ prolific persona. the installation was conceived by architect sophia vyzoviti in collaboration with students of the department of architecture from the university of thessaly and the school of visual and applied arts from the aristotle university of thessaloniki. 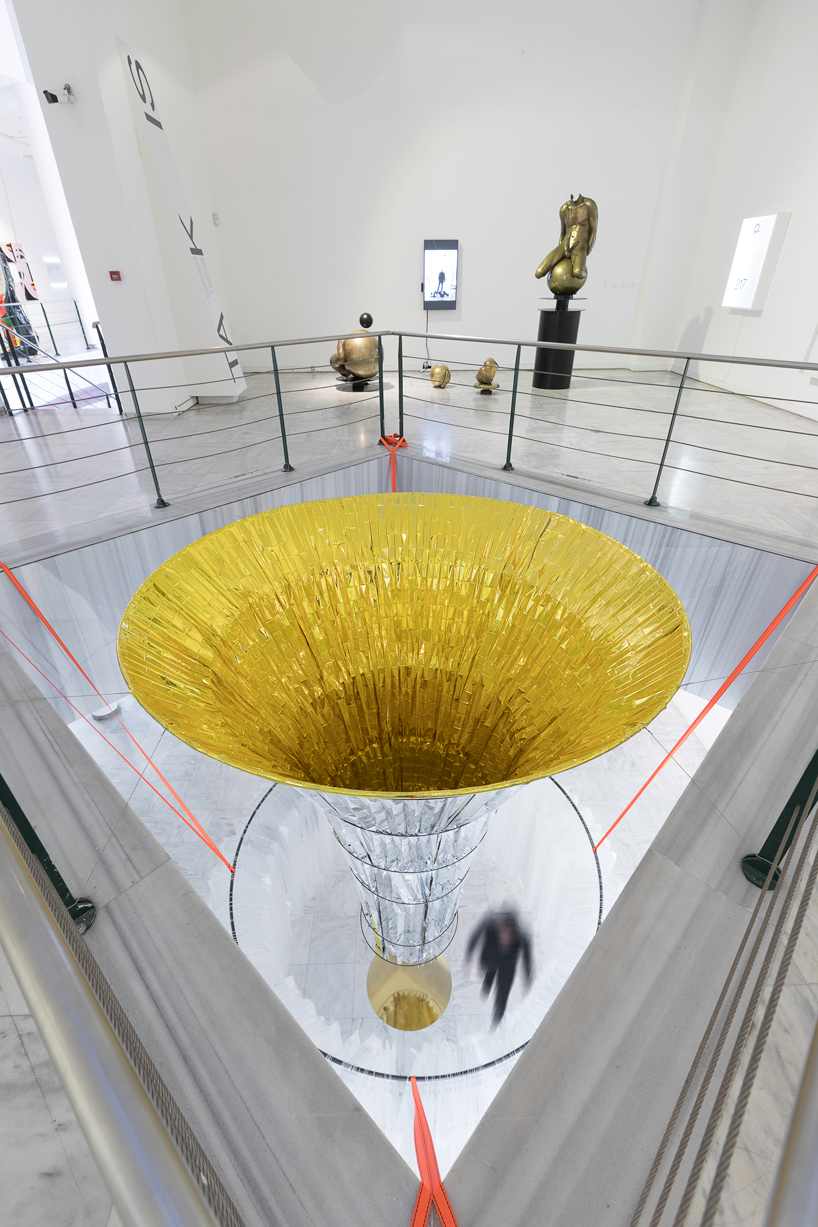 suspended in the atrium ‘iolas shelter’ creates a visual link between the museum’s ground floor and main exhibition level.

known as the man who discovered andy warhol, iolas was a greek gallerist and art collector. he was an ambassador of the arts, a cosmopolitan merchant, a networker and an intellectual. conceptualizing his polyvalent personality and taking from his biography, the designers of the installation included significant characteristics and transformed them into a physical space. his sense of universality in an era before globalization, hellenic heritage as a catalyst for cosmopolitan placelessness, his contribution to the momentum of the avant-garde and his affection for painting and dancing are expressed with spatial elements. 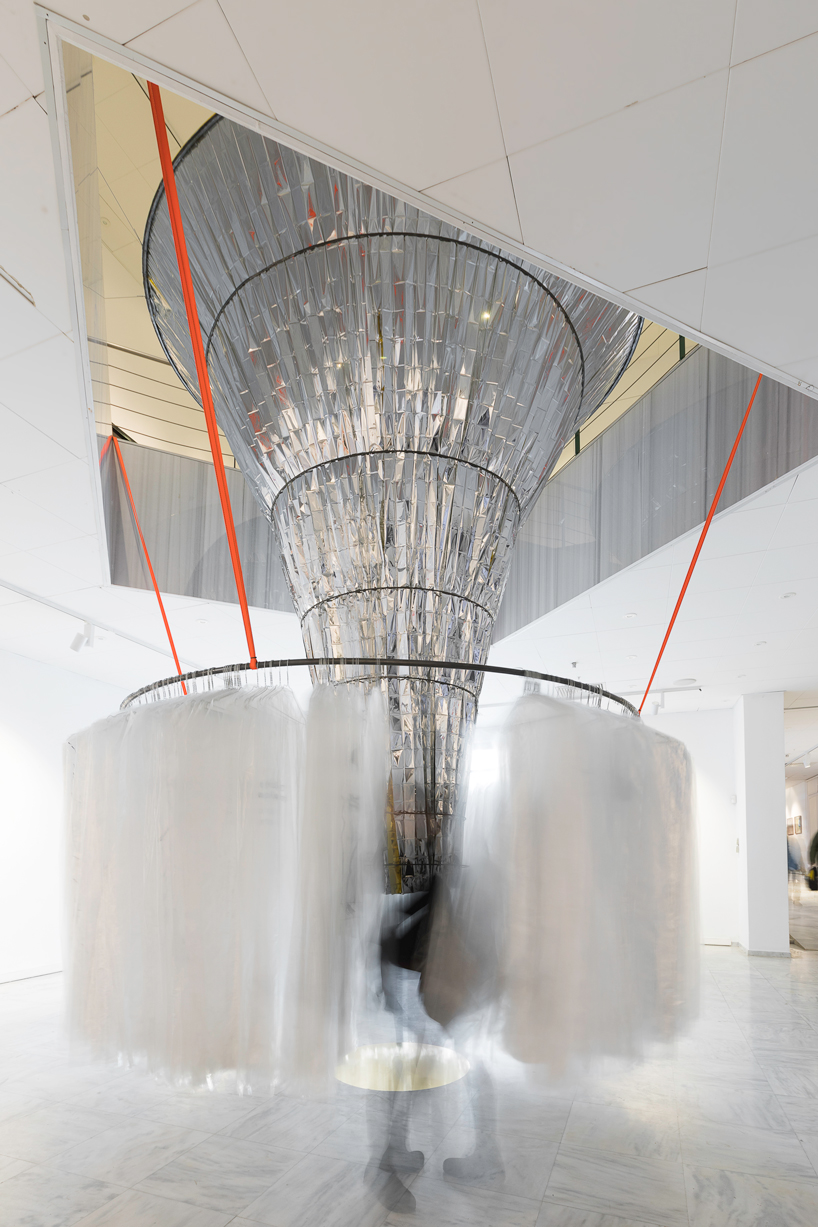 the column, the pyramid and the orb, coexist with synthetic materials and ready-mades composing a translucent architectural body in suspension.

archetypical shapes like the column, pyramid and the orb are juxtaposed with complex geometries, synthetic materials and ephemeral elements. together, they are composed into a translucent architectural body suspended from the ceiling. the lightweight structure is conceived as a garment for the visitor’s body, immersing it within the installation.

the central element, the paraboloid funnel’s golden interior represents alexander iolas’ inventive character. the funnel’s swinging metal frame is lined with emergency blankets. the skin of the funnel itself is composed of a double surface of mylar: heat-absorbing gold on one side and reflective silver on the other. the material selection is a metaphor to the recent refugee crisis that conveys multiple and contradictory meanings. wealth and glamour are juxtaposed to unsettlement, precarity and displacement. 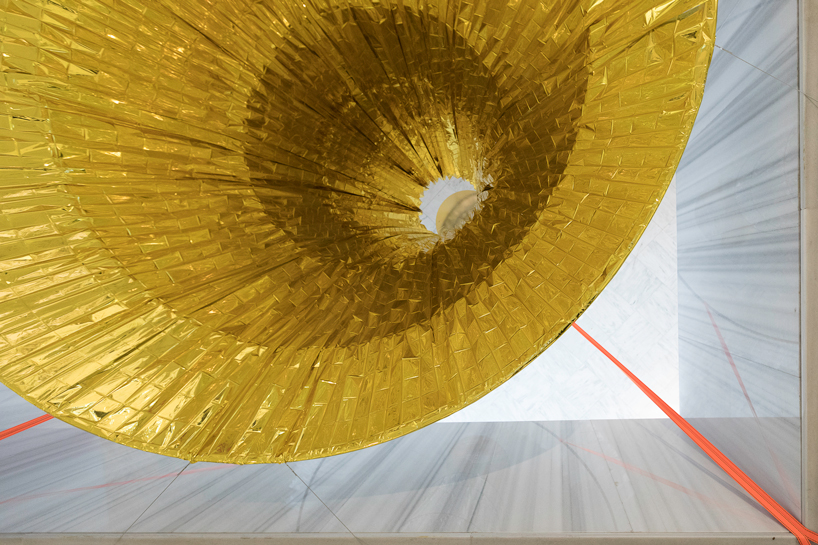 ‘iolas shelter’ is a lightweight structure tailored as a garment to the human body exploring relations between architecture and textiles.

wrapped like an overcoat around the funnel, a circular cloakroom references the once luxurious – now ruined – villa iolas in athens, in whose basement a precious collection of garments was kept. four hundred nylon garment protector bags become the canvas of experimental writing, the narrators of a spectral presence. instead of clothes, there is an archive of drawings and texts, portraits, heirlooms and quotes. 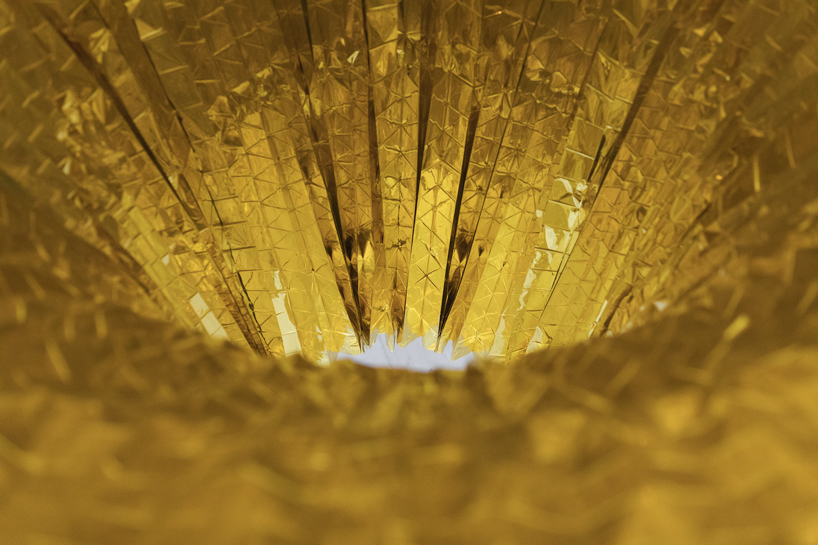 alexander iolas prolific persona is expressed in the golden interior of the paraboloid funnel whose swinging metal frame is lined with emergency blankets.

occupying a nodal location in the museum’s layout, the structure incorporates architectural elements from its context. suspended in the atrium of the apergis hall, it creates a visual link between the ground floor, the first floor with exhibitions and the museum roof, where a glass pyramid skylight reminds the visitor of iolas’ birthplace in alexandria, egypt. the space serves as a focal point within the museum and shines a golden light on illustrious iolas. 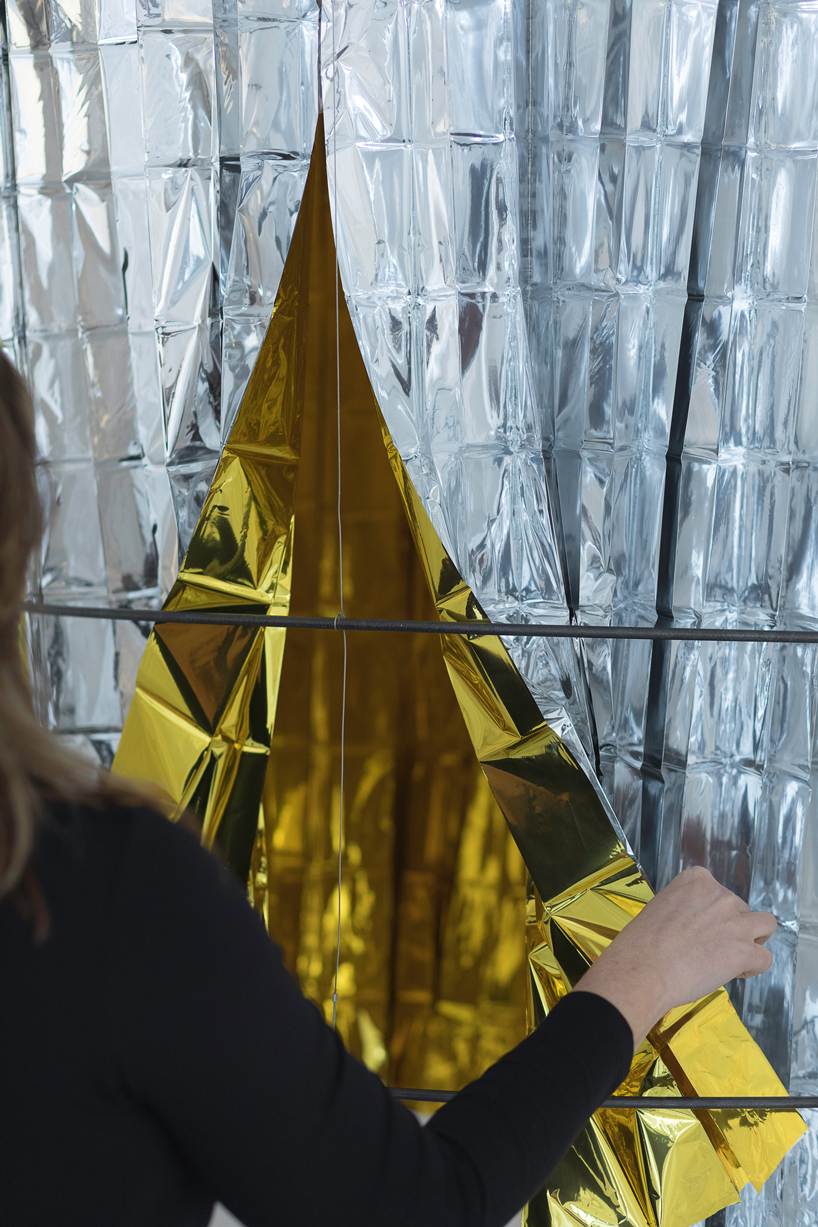 the double surface of mylar; heat-absorbing gold on one side and reflective silver on the other, is an image all too familiar in the recent refugee crisis that conveys contradictory significations. 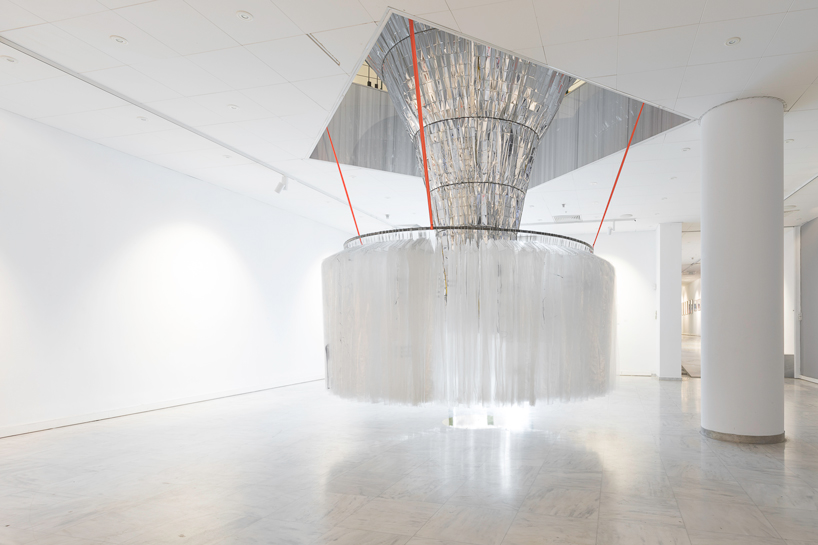 wrapped like an overcoat around the funnel, a circular cloakroom refers to the once luxurious and now ruined villa Iolas in Athens in whose basement a precious collection of garments was kept. 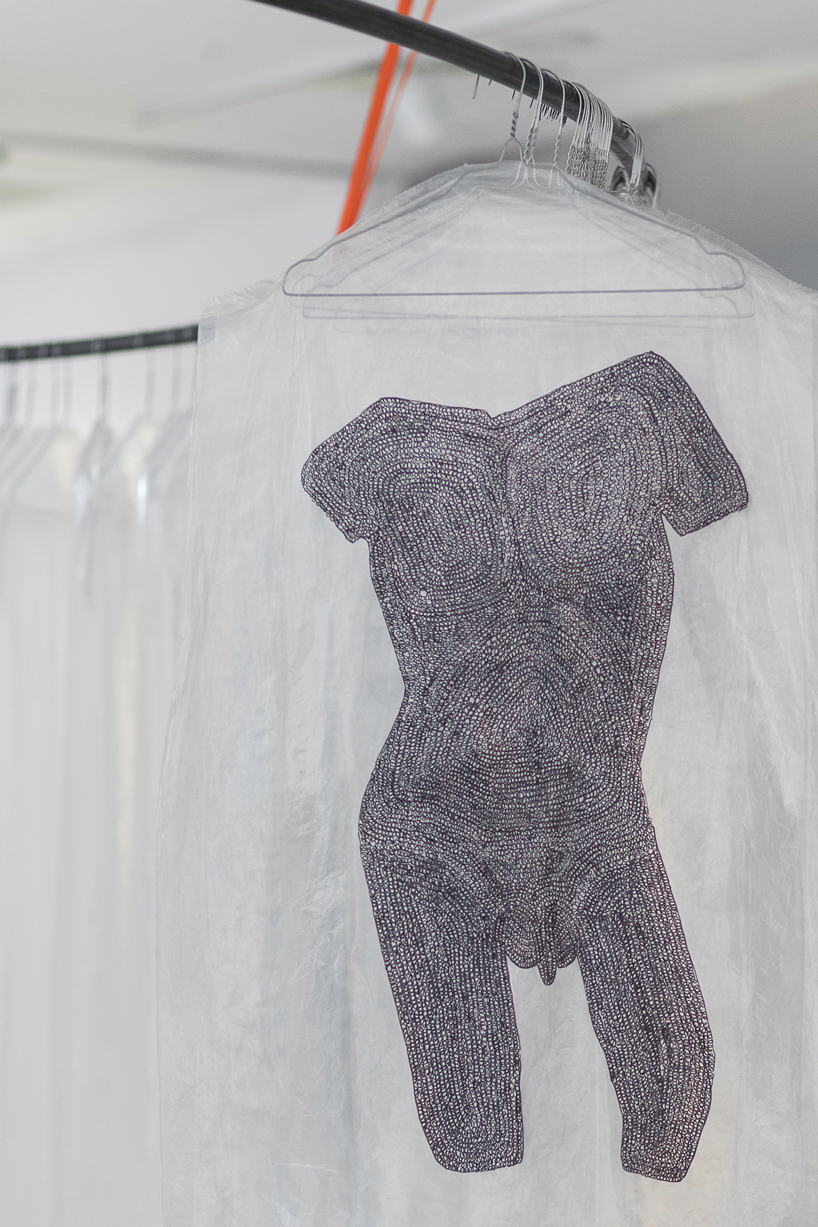 instead of clothes, we find an archive of drawings and texts, portraits, heirlooms and quotes. 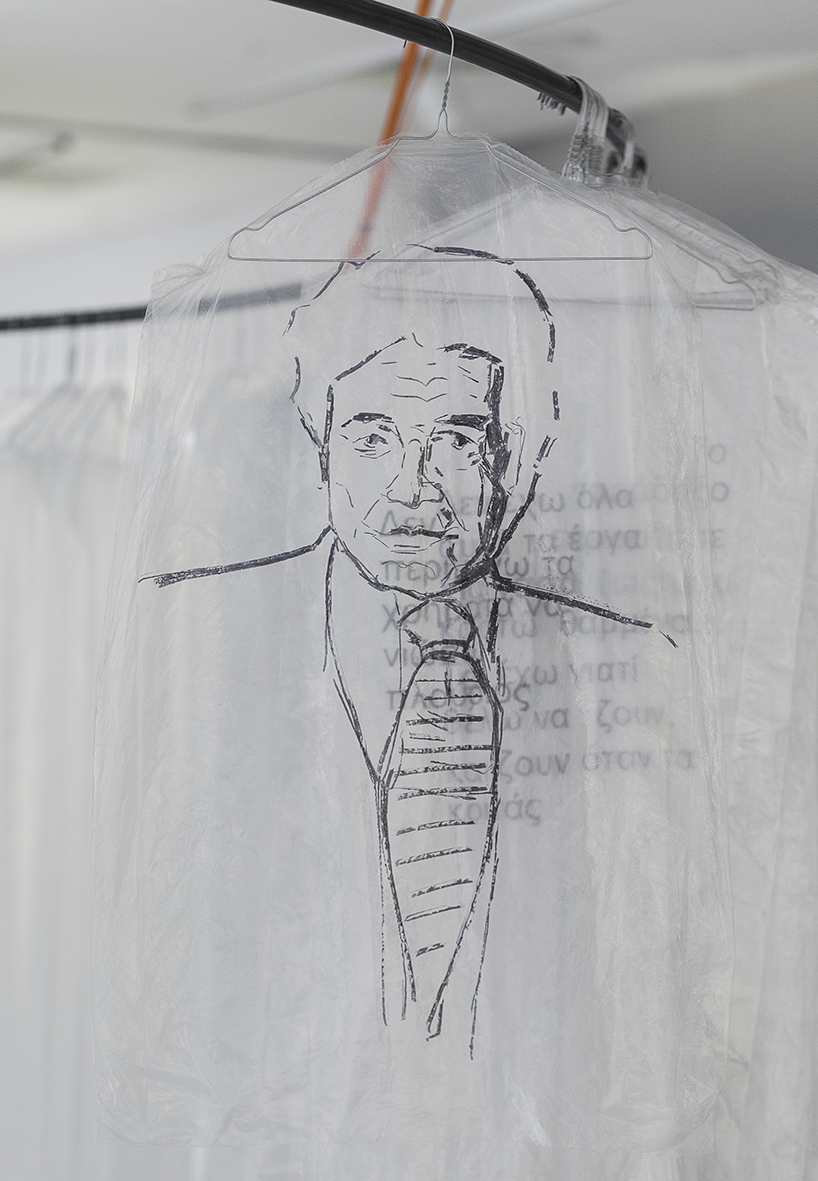 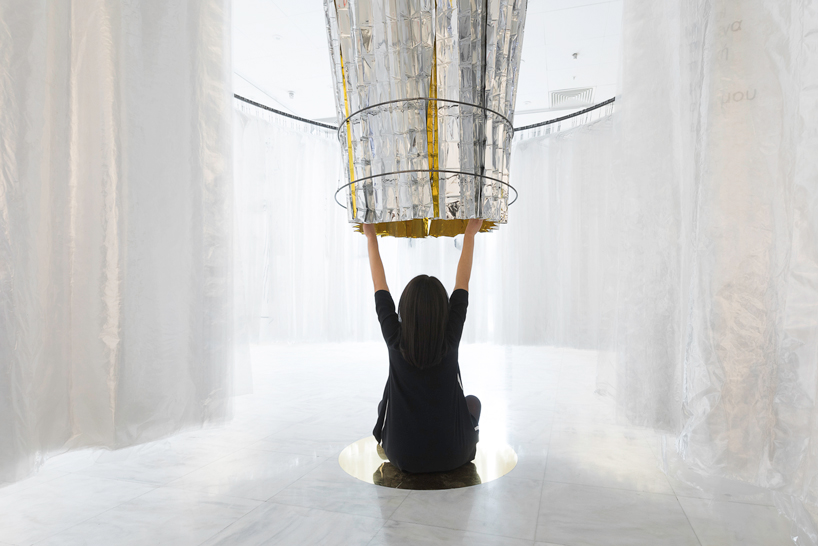 having permeated the synthetic foliage, we are puzzled by the rim of a funnel, thin as skin, reflective as a mirror. 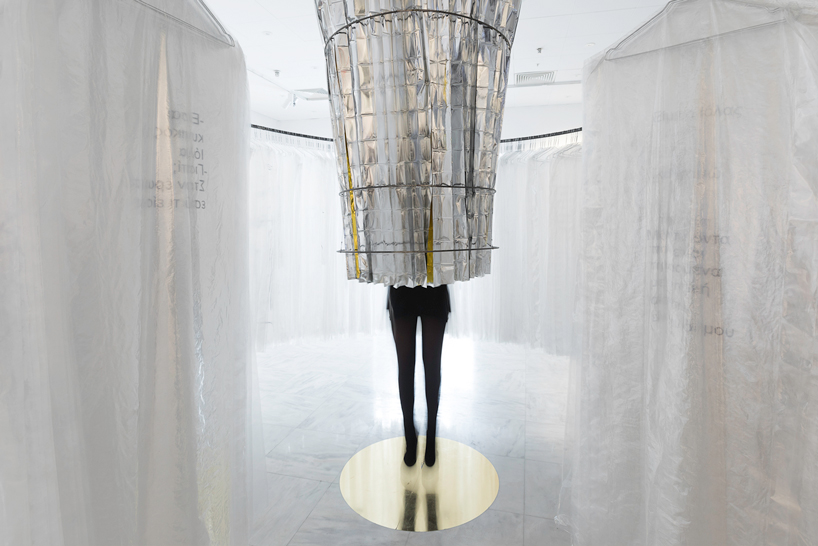 with a little bow, we slide inside. 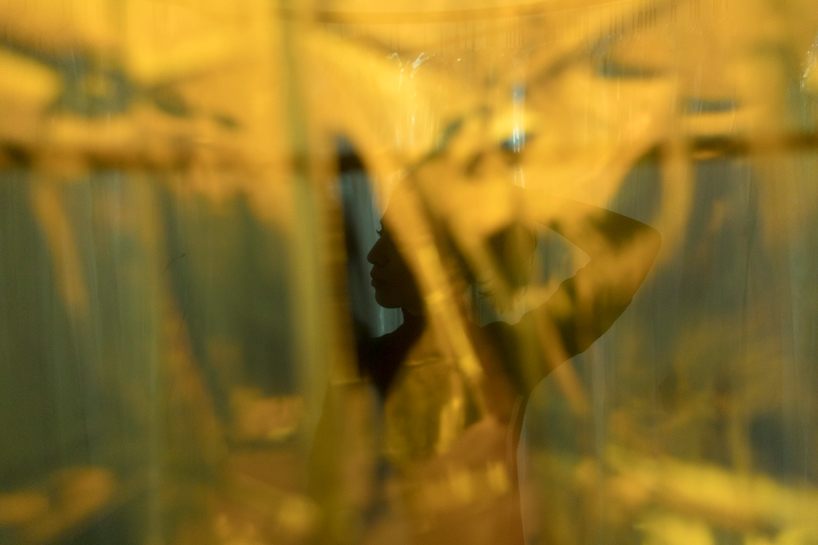 in the isolation of a dazzling hinterland all we see becomes gold. 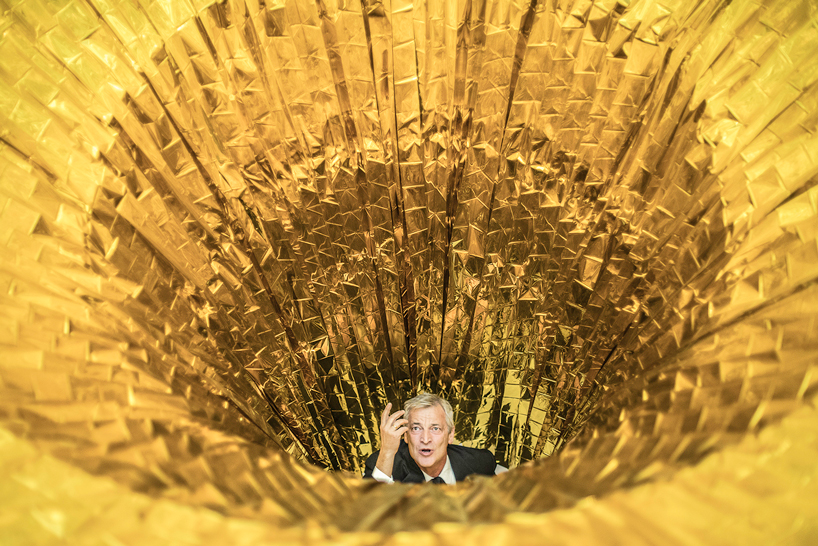 we turn our heads towards the sky to realize that our isolation is utterly exposed to supervision.

installation duration: ‘alexander iolas: the legacy’ on show between 6 october 2018 and 31st march 2019