ryan enn hughes, a director and photographer based in toronto, canada, has produced a new animated GIF series picturing individuals jumping about a darkened space ‘painting’ with a lit sparkler. the collection of moving images portray four young people drawing illuminated and non-static shapes in various formations as the artist has sewn together several 5,000 pixel images for each piece. the photographs were captured by hughes in first constructing an entirely darkened interior space then making permanent these light-drawn images with a DSLR camera set to an eight-second exposure. hughes notes that while he has been experimenting with the medium of animated GIFs for some time, ‘sparklers’, is his first completed moving picture project.

this man moves the sparkler in shapes creating squares, stars, hearts and straight lines around his jumping form

a young man springs into the air, moving his light in a manner that creates winds, a halo, hearts among many other more fluid forms

‘sparklers – behind the scenes video’ by ryan enn hughes 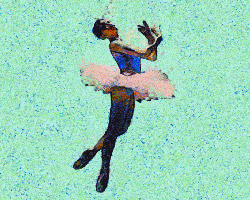