‘pointed’ emerges from the roofline of an empty building

messam has integrated three inflatable, fabric sculptures into the buildings and landscape of the borders sculpture park at mellerstain house. all white in color, the trio of structures emerges as a contemporary echo of the marble statues originally envisaged to adorn the gardens, establishing a dialogue between past and present.

‘scattered’ comprises a series of spheres that seemingly float like enormous opaque bubbles on the surface of the property’s lake, punctuating one of the most known and impressive views of mellerstain. spanning up to four meters in diameter, the shapes interrupt the space of the water and play with its scale, surface and light. ‘pointed’ emerges from the roofline of a building and extends out from its long-absent pitched roof. 28 elongated peaks rise more than three meters in the air, mimicking the silhouette of a starburst or stylized explosion frozen in time. finally, ‘towered’ materializes from the curved walls of the ruin of an old laundry with column-like forms reaching over eight meters high. messam extends the structure’s uncertain origin with new narratives that play with their inherent sense of wonder.

28 elongated peaks rise more than three meters in the air

messam plays with the structure’s inherent sense of wonder

situated on the surface of the property’s lake, the orbs punctuate one of the most known views of mellerstain

spanning up to four meters in diameter, the shapes play with the water’s scale, surface and light 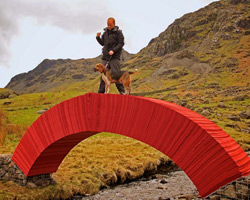