designboom has received images from studio 400’s ‘white’ installation. a team of twenty students from a fifth-year architectural design studio at california polytechnic state university, san luis obispo (cal poly), developed the large-scale, interactive sculpture to showcase each student’s research book. the piece integrates both the introduction of the students’ investigative publications and their collective installation by creating a previously unseen environment. ‘white’ is an actualized representation of the relationship between environment, user, material and space. the 4,500 square foot space has been transformed by a climbable sculpture constructed from 80,000 square feet of plastic sheeting arranged in cylindrical and tapered weaves. the material was first sliced, then loomed, woven, stapled, taped and tied by the collective in order to create a supportive surface in which gallery goers could rest and examine their architectural studies. 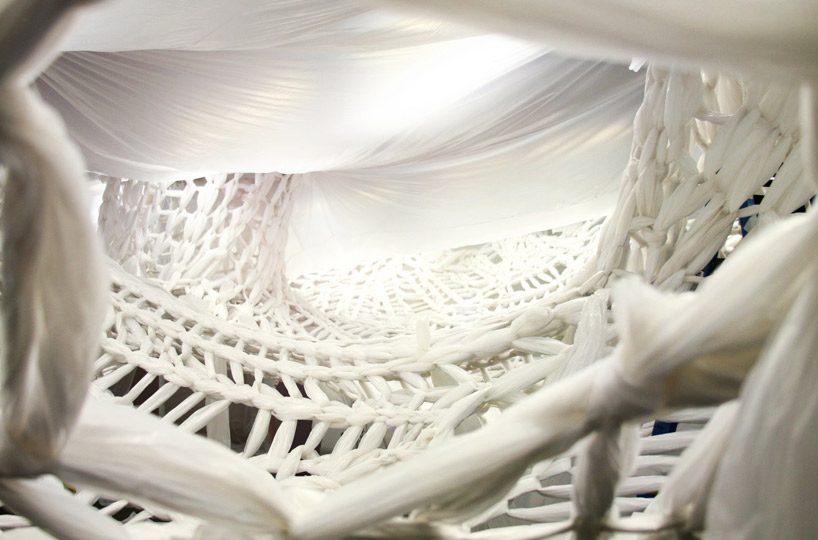 the twenty students aspired to create a sculptural work which would function as a climbable surface which could divide the space. studio 400 decided upon plastic to develop the work due to its flexibility, strength, cost efficiency and ability to be reused or modified following its role in the ‘white’ installation. the woven surface was constructed through traditional weaving methods, becoming a malleable system of prefabricated hanging columns and infill panels to fill the large gallery. 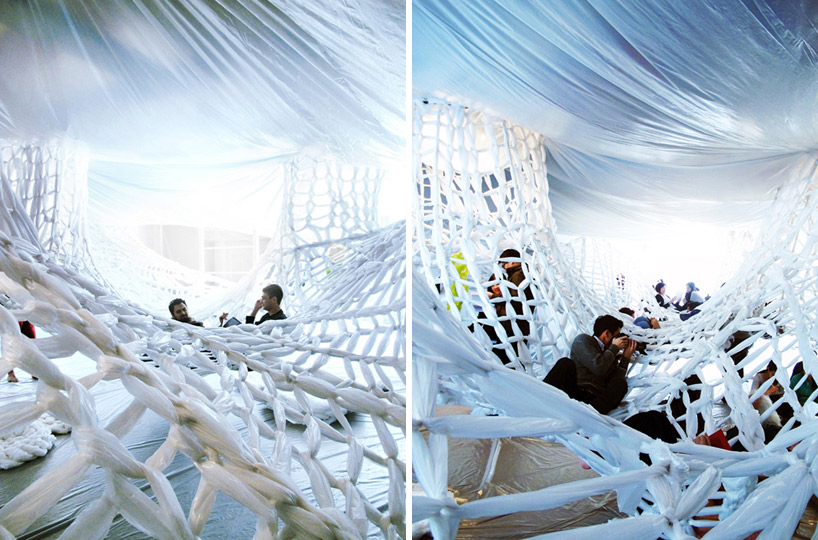 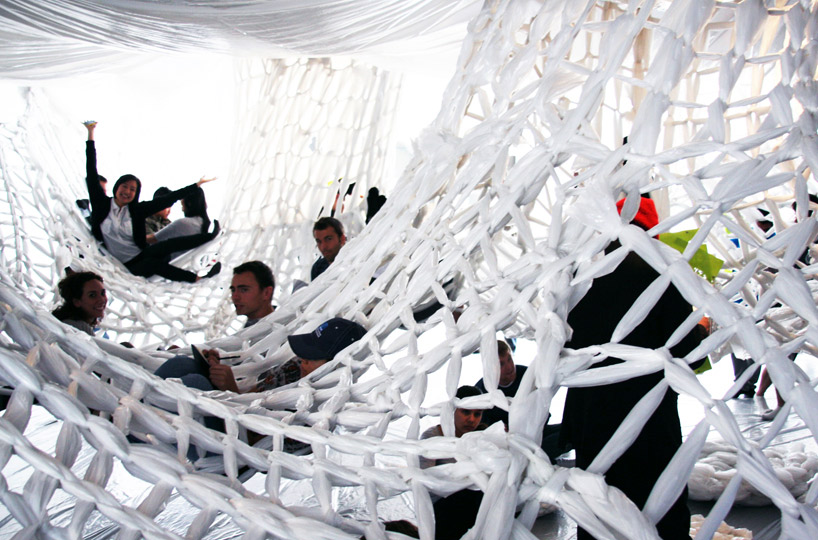 the piece has been engineered so that both above and below the piece, installation viewers may actively enjoy the sculpture 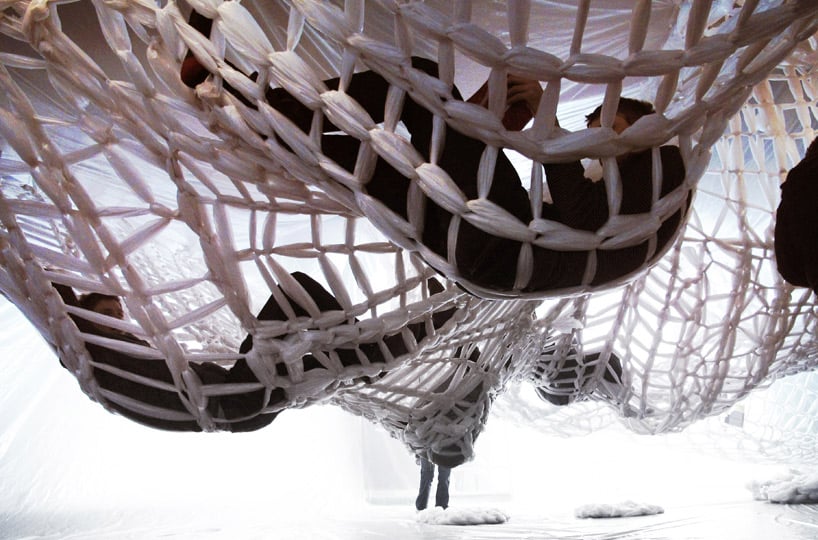 guests recline in the exhibition space 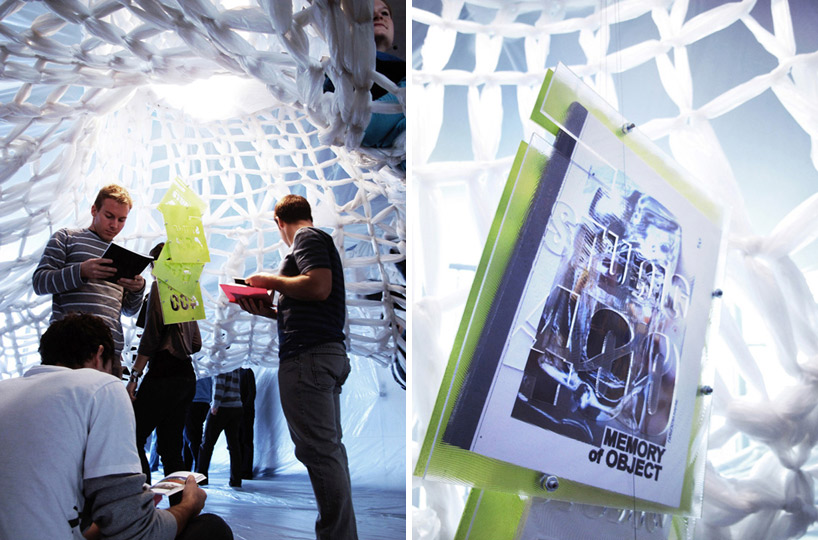 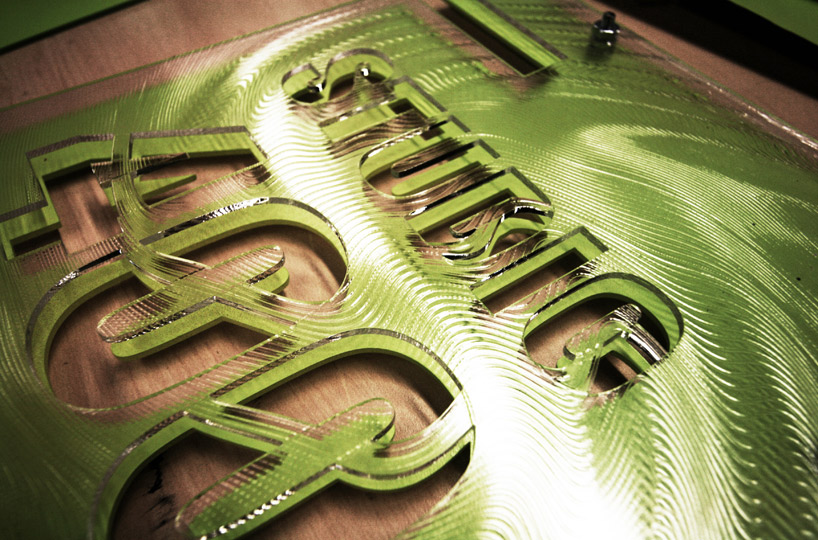 the book slipcases have been laser-cut from clear acrylic panels 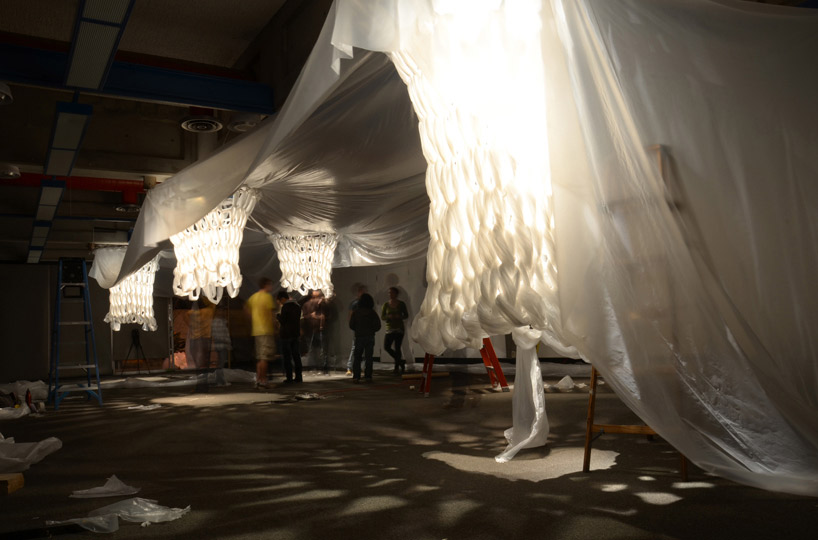 the ‘white book installation’ in progress

‘students participated in a collaborative, two-day effort to construct the components for the piece. circular and straight weaving looms (assembled from re-used materials) allowed for the quick and precise weaving of the columns and panels. round steel rod was hand-bent into five foot diameter rings that provided a transitional structure between the gallery space and the woven vertical columns. the foresight of using of pre-fabricated elements allowed the piece to be custom-fitted to the gallery space within a three-day time period.‘ -studio 400

conceptual drawings of the piece