swing it! by morag myerscough and luke morgan in wakefield, UK.
photo by bob collier.

morag myerscough and luke morgan have created a kinetic interactive art installation at the orangery’s garden in wakefield, west yorkshire, UK that explores ‘ideas and memories of play’. swing it! opened earlier this month and will remain in place until 30 september – admission is free.

the 10m high installation is a scaffold structure with fabricated metal swings, aluminum mobiles, wooden hand-painted seats and signs. it playfully creeks and waves its 72 brightly colored hand-painted signs at the passer by. the wind spins intriguing mobile shapes as the movement from people using the swings below gently rocks the signs above sending an invitation to come and play.

swing it! by morag myerscough and luke morgan.
video produced by beam. 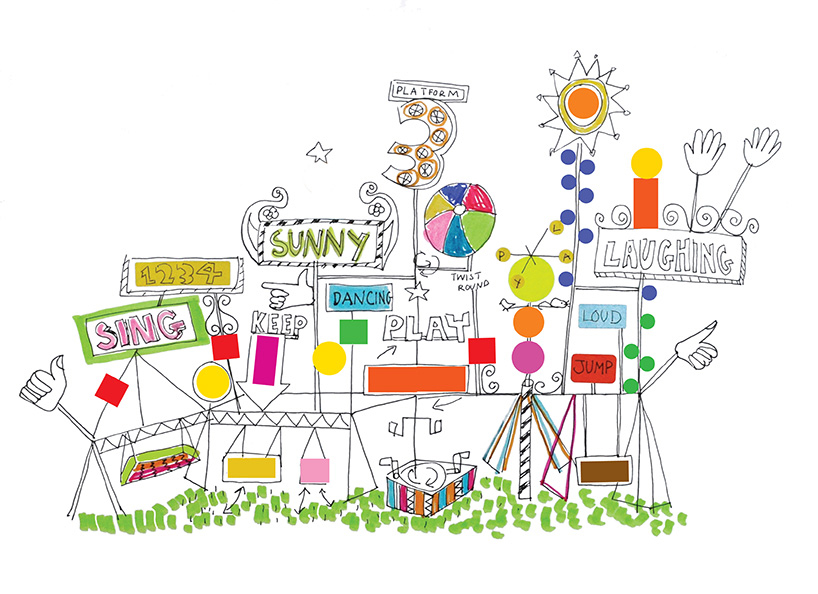 swing it! sketch by morag myerscough. 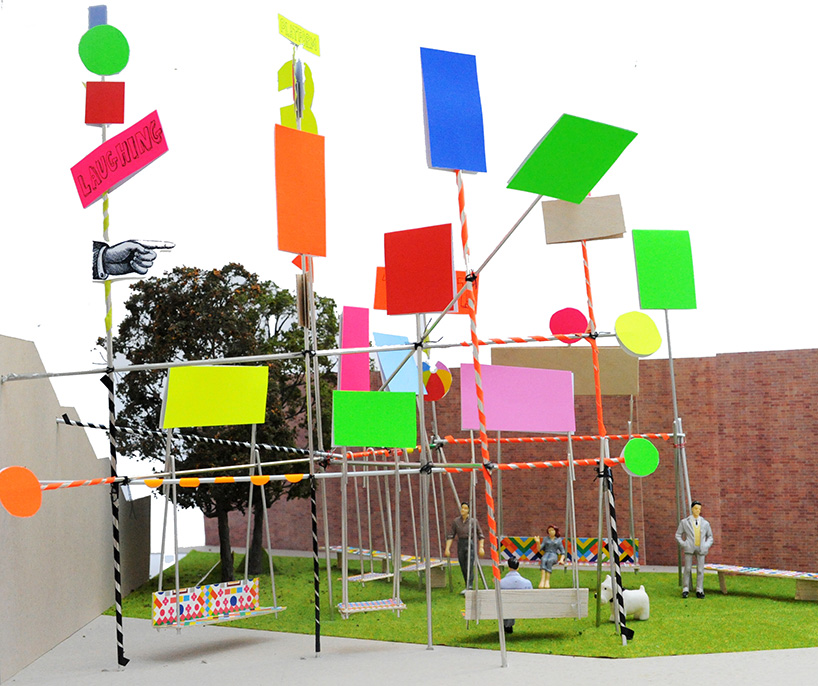 swing it! model by morag myerscough. 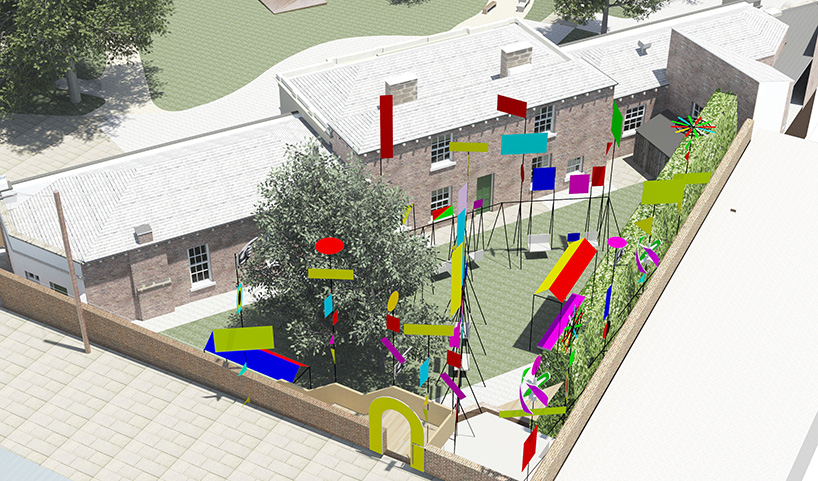 visualization of the swing it! installation by morag myerscough and luke morgan.

swing it! was commissioned by beam – a public arts charity who invited luke and morag to build the installation. after learning that the orangery has been occupied by schools at various times in its history – the last time being during 1930s to 1957 – myerscough & morgan felt a the site had a strong connection with play and held many fond memories. this led the artists to think of long summer days, children’s laughter and playground chants, this resulted in morag making a sketch [above] and luke writing a poem [below]. 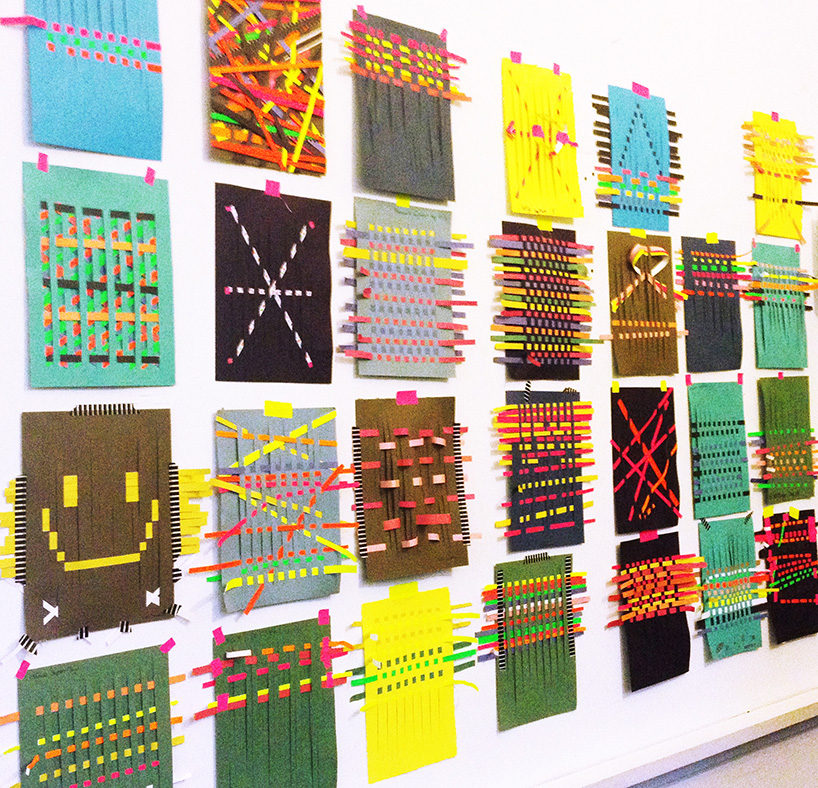 the woven paper references wakefield’s connection to the textile industry, these experiments formed part of the visual language for swing it!

‘developing the patterns on the swing seats we were inspired by wakefield’s long history of textile manufacturing and combining this with the thoughts of british summer traditions especially the use of the iconic ‘picnic rug’ which to us epitomized the informal, social, shared essence of play to all ages. which lead to a paper weaving workshop with local residents and the results have been combined in the final patterns for the swings.’ – morag myerscough & luke morgan

the words were handpainted on to the 72 double-sided signs by morag in her studio and the wind mobiles fabricated by luke in his studio. 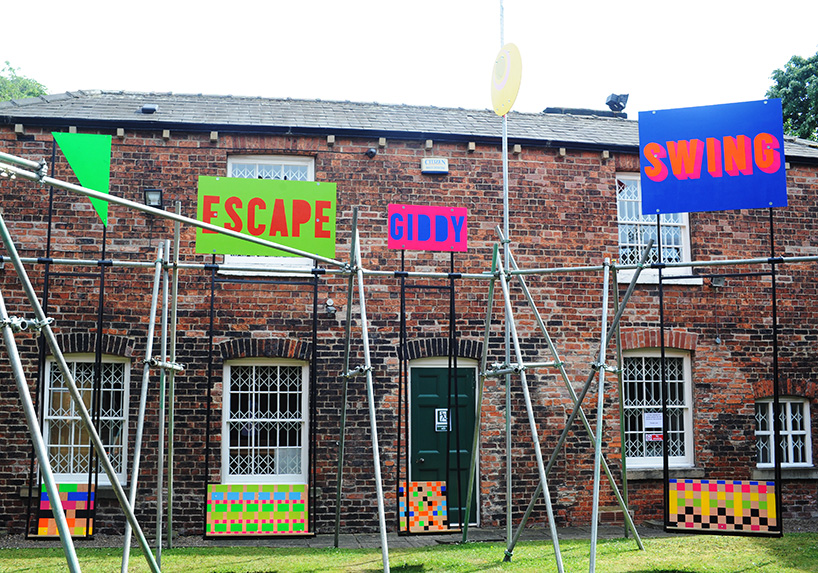 swing it! by morag myerscough & luke morgan in wakefield, UK 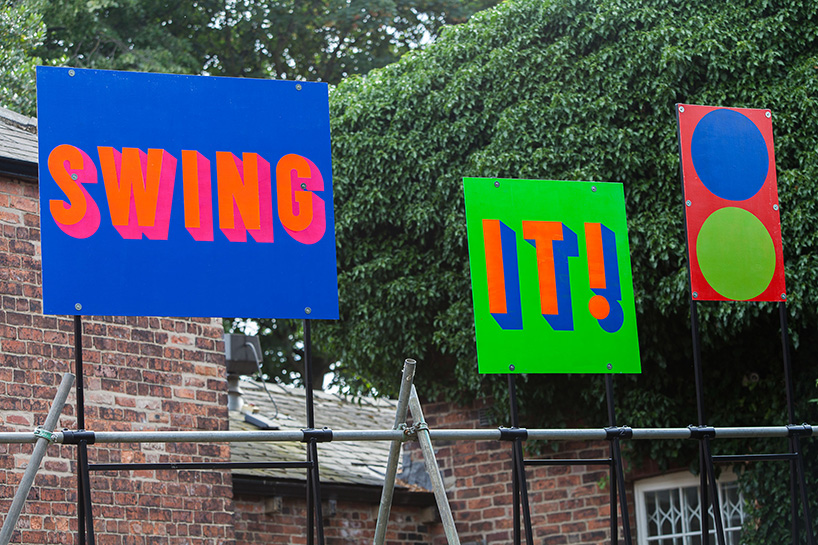 swing it!
photo by bob collier. 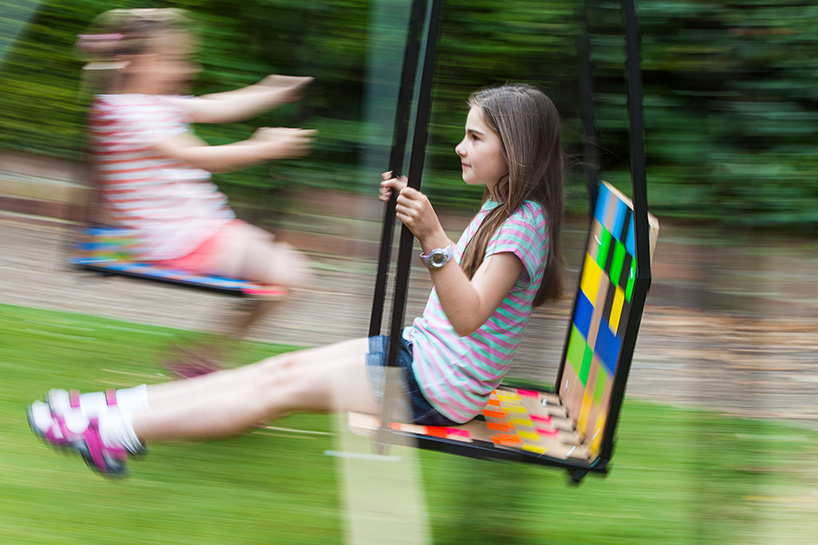 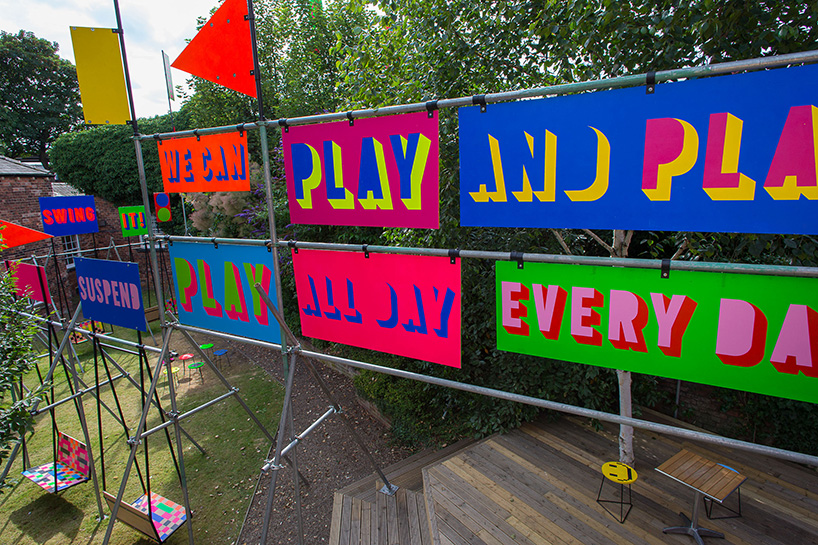 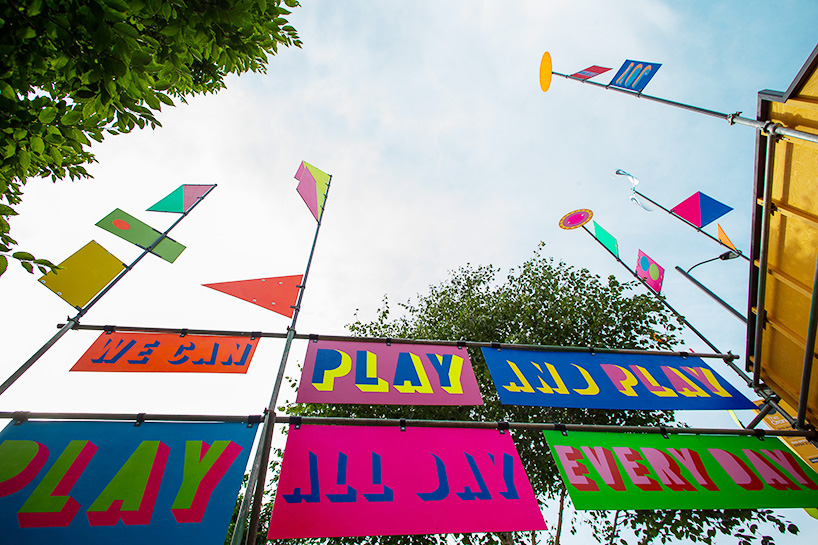 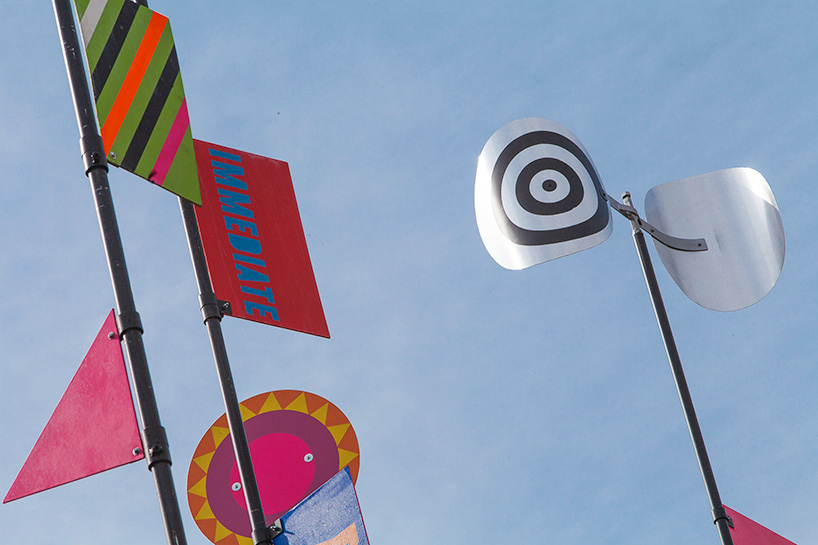 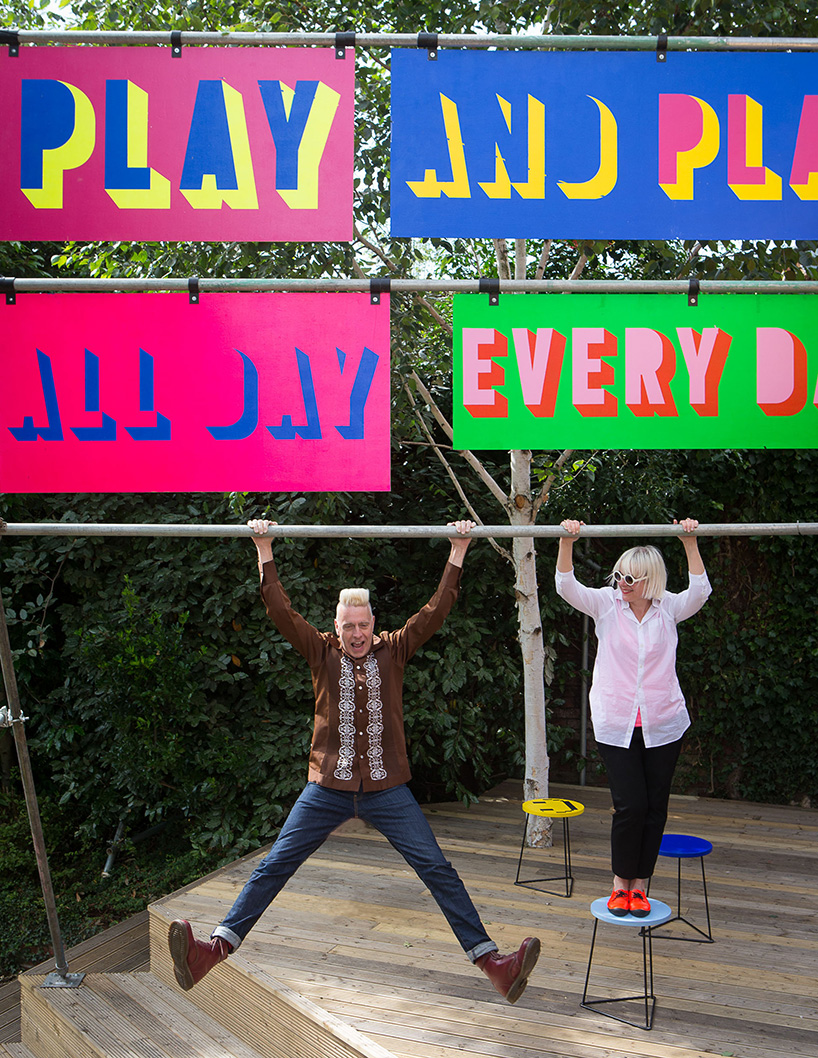 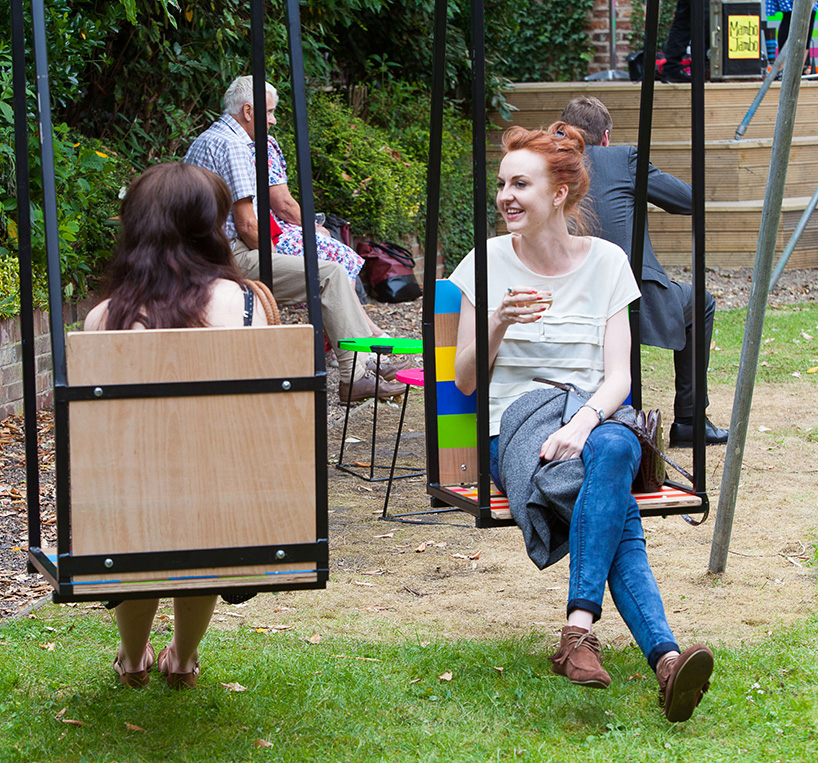 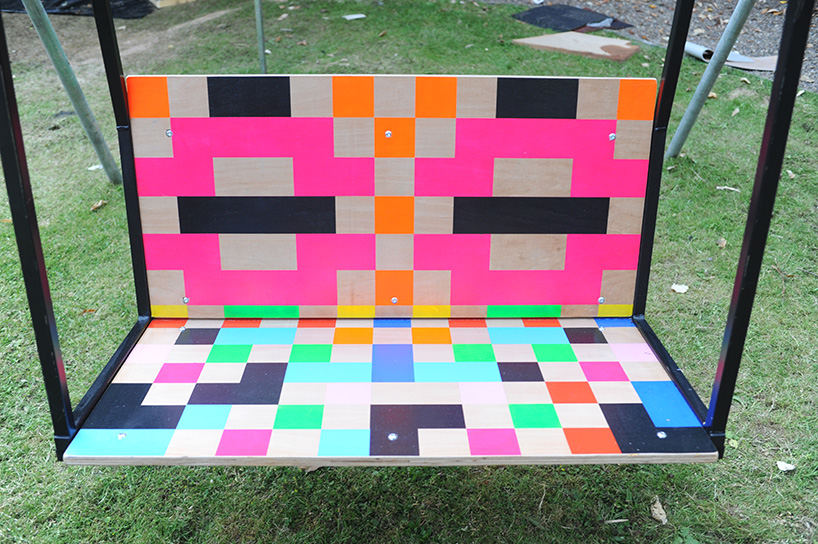 detail of a two person swing.
photo by supergroup. 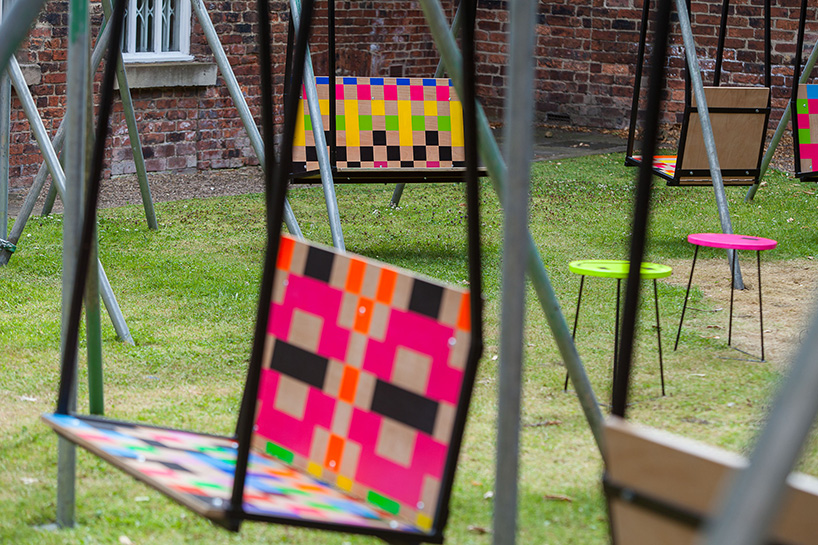 view of the swings in the garden of the orangery, wakefield.
photo by bob collier. 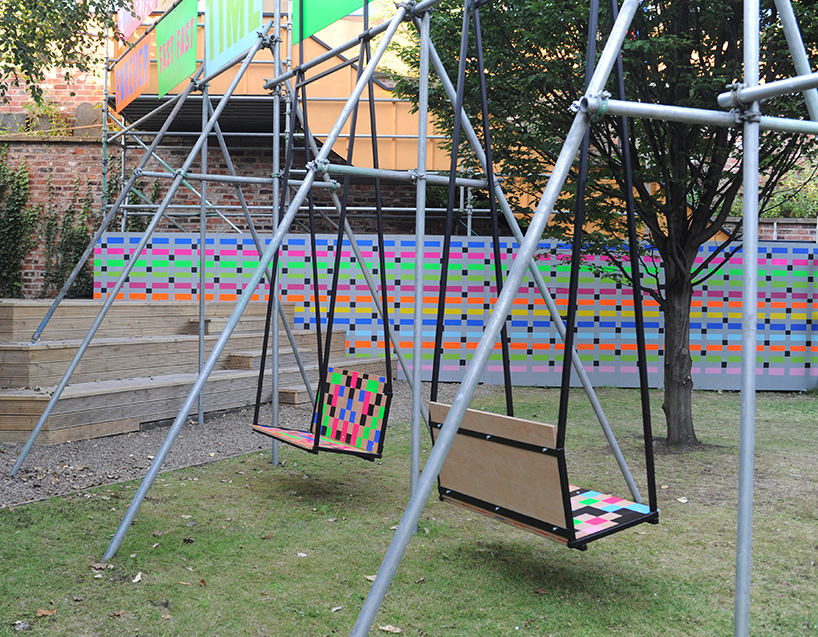 swings and wall with the woven graphic pattern.
photo by supergroup. 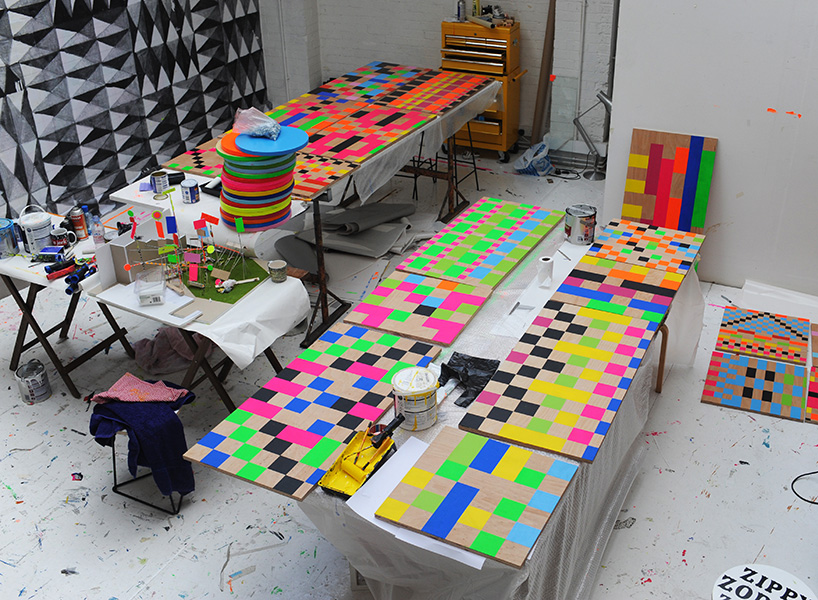 swing panels being painted at morag’s studio.
photo by supergroup. 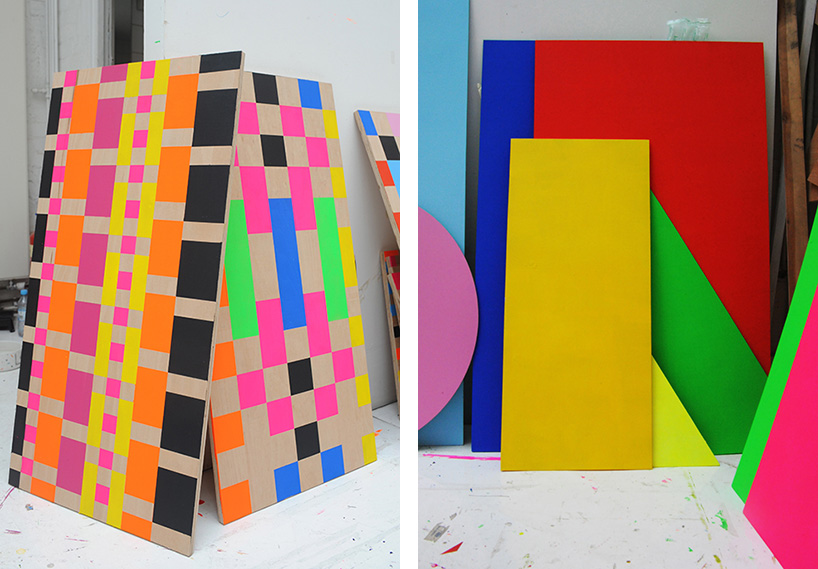 swing and word panels during preparation.
photo by supergroup. 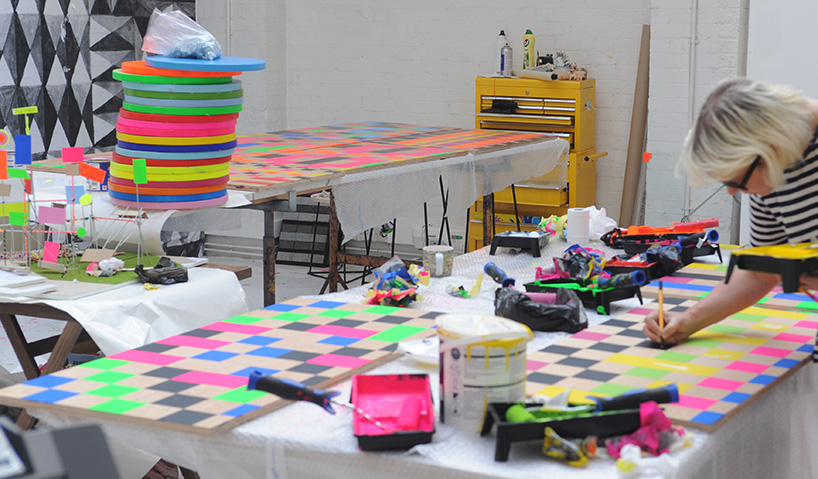 morag working on the swing panels.
photo by supergroup.

admission to swing it! is free – please visit the orangery website for more information.