each year, since 1988, the tate archive and library in london has commissioned an important contemporary artist to decorate a christmas tree for display in its grand rotunda. we have been presented with some strange ideas, which has been all in good fun and part of the christmas spirit.

tacita dean’s 2009 christmas tree, has turned out to be, imagine this… ‘christmassy’. entitled ‘weihnachtsbaum’, the candle lit tree was on view at the tate britain from december 11th until december 23rd, 2009. the 4-metre-high nordman fir was decorated with specially made candles. for the course of the two weeks, the candles were lit everyday at 4pm and were designed to slowly die out at 6pm when the museum closed.

tracey emin’s 2002 ‘tree’ wasn’t a tree at all. instead, it was a booth made of canvas. emin donated the actual tree to lighthouse west london, a charitable organization which serves patients with HIV and AIDS. in its place was a panel asking museum patrons to make a donation to the charity in exchange for a raffle ticket. a lucky donor won a valuable prize at the end: an original artwork by emin.

in 1996, julian opie decided not to simply decorate a tree, but created a forest by constructing a number of model trees constructed from two intersecting planes of wood. highly stylized, the pieces resembled over-sized children’s toys and evoked the feeling of a forest. 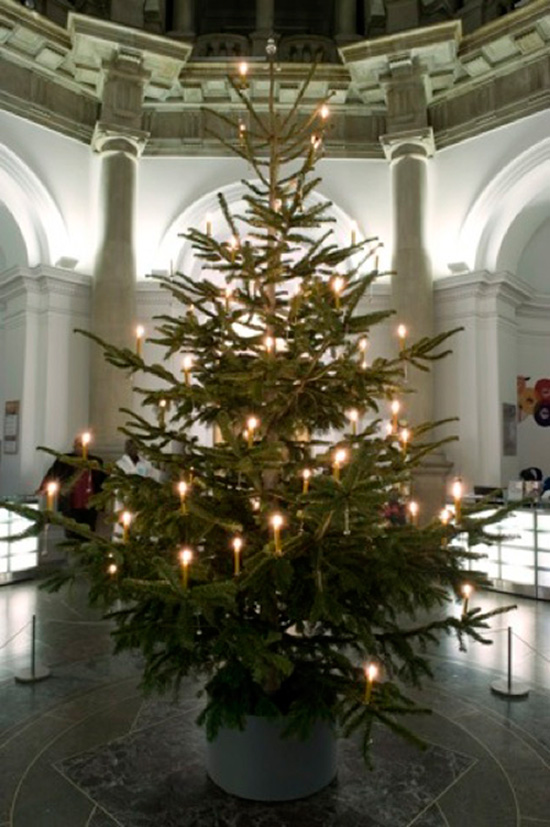 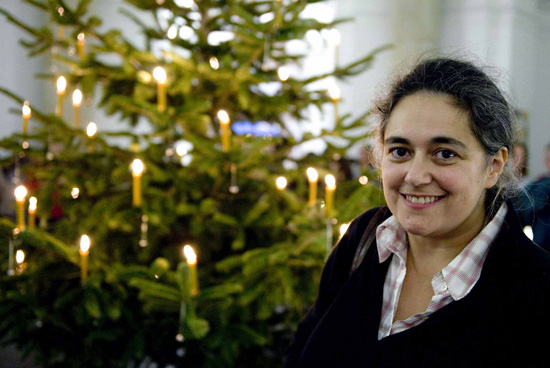 tacita dean, who lives in berlin, drew inspiration for her tree from the way christmas is celebrated in germany: ‘I was struck when I arrived in berlin by the simplicity of christmas there. I felt the germans had managed to hold onto something of its purity and magic despite commercial pressures. they have a great tradition of christmas decorations and are still unafraid to have real candles on their trees. it was fascinating to learn that the origin of the bauble stemmed from the spherical weight hanging beneath the holder that kept the candle upright. as many of my films encompass twilight and the transition from day to night, it seems appropriate to light the candles at this moment of each day.‘ – TD