french brand of bottled mineral water perrier® has a rich heritage in the arts and for over a century it has been committed to supporting the next-generation of creative leaders shaping contemporary culture. from salvador dalí to andy warhol, the brand has collaborated with great artists, allowing them to restyle the iconic and vibrant perrier® green bottle. its latest collaboration features renowned japanese artist takashi murakami whose signature smiling flowers will bring an extra pop of color and joy to the iconic bottle.

prior to the launch, designboom spoke with murakami who shared with us insights on the creative process, the challenges and some advice for young creatives. 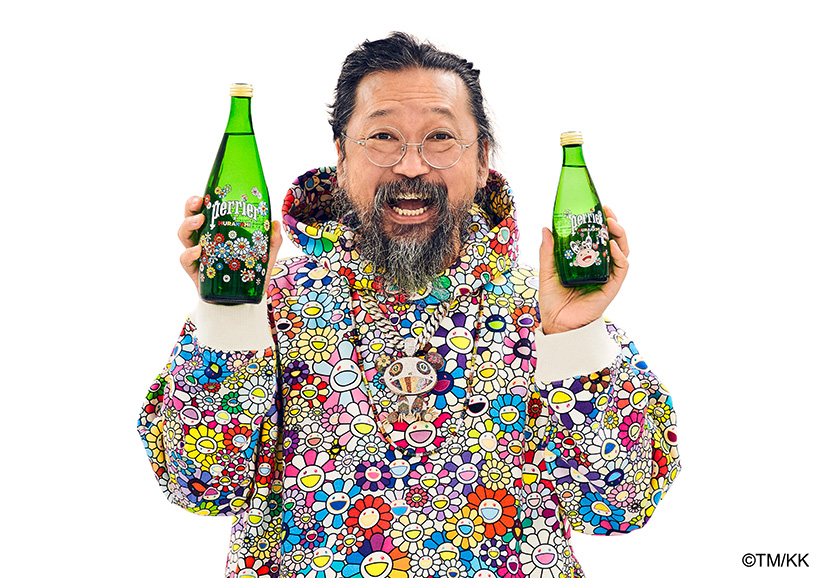 DESIGNBOOM (DB): can you guide us through your collaboration with perrier?

TAKASHI MURAKAMI (TM): when perrier approached me, I felt honored at the opportunity to collaborate with such a well-known brand that for me holds many positive associations. perrier also has a long history of working with artists.

because of the ongoing COVID-19 pandemic people are increasingly immersing themselves online, and due to social distancing, communication styles have drastically changed overnight. that is, people can no longer interact in ways that several months ago were so normal. as one of the enjoyable tactile experiences still available to us, the carbonated water’s stimulating sensation on one’s tongue and lips could especially stand out. so, I hope this collaboration will contribute in blowing up that sense of elation further.

I worked closely with perrier throughout this collaboration, and we have created a number of fun perrier products, including two premium limited edition perrier screen printed glass bottles, which will be launched early october 2020. in early 2021, the full perrier original range will be released.

I also had the chance to direct an animated movie with perrier to bring our collaboration to life. 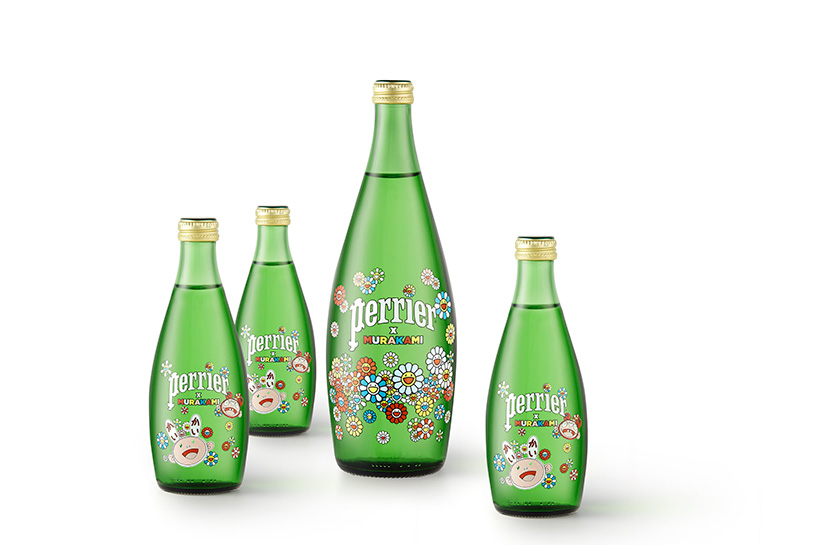 DB: what were the difficulties — both physically and conceptually — you encountered when facing this project?

TM: on a practical level, adapting my artworks, which are designed extremely precisely, to a variety of containers and packages was quite challenging. we had countless back and forth between my studio in japan and perrier’s team in france over many months before we could arrive at the final versions. and due to my artwork usually appearing flat on the surface, we really had to tailor the imagery to the curved surface of the bottles. 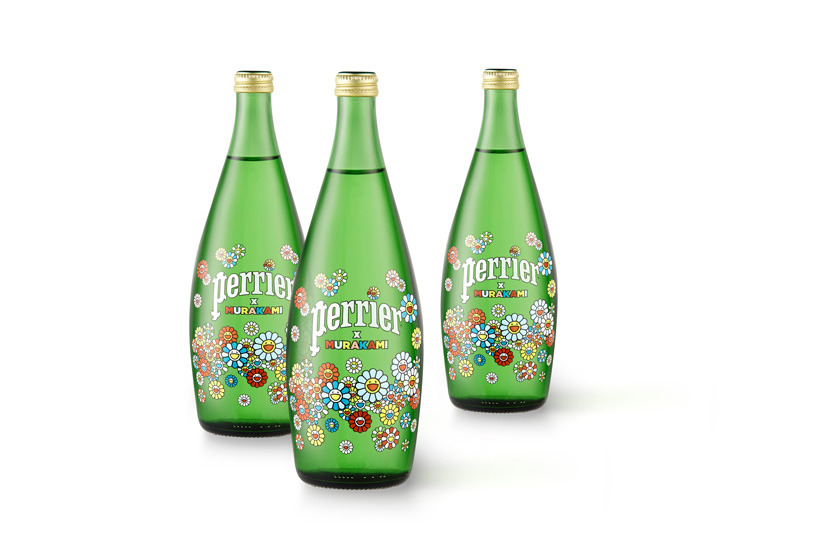 DB: two of your well-known characters — kakai and kiki — as well as your signature smiling flowers are featured on the bottle. what’s the story behind them, where do they come from? why not mr. dob?

TM: when I first spoke to perrier, they were interested in working with my signature characters, flowers and kaikai and kiki. so I understood that I, myself as an artist, was to be a significant part of this collaboration.

I studied nihonga in university and one of the traditional painting subjects is setsugetsuka (snow, moon, and flower). I attempted to paint flowers myself in this line of tradition and that is how I first came to paint flower motifs. the smiles on the flowers have to do with japan’s post-war kawaii culture.

kaikai and kiki originated in an adjective invented to describe an eccentric japanese painter from 450 years ago, to mean something like ‘splendid, wild, and venerable,’ as an expression of admiration similar to ‘bravo’ or ‘wow’. I named my company kaikai kiki, and subsequently made the characters of the same name. these characters embody total, delightful surprise. the cultural specificity of the kaikai and kiki characters as well as the flowers is an element of my work that I am glad to have brought to this collaboration with perrier because I don’t think there had been strong japanese or asian influences in the brand’s past collaborations. 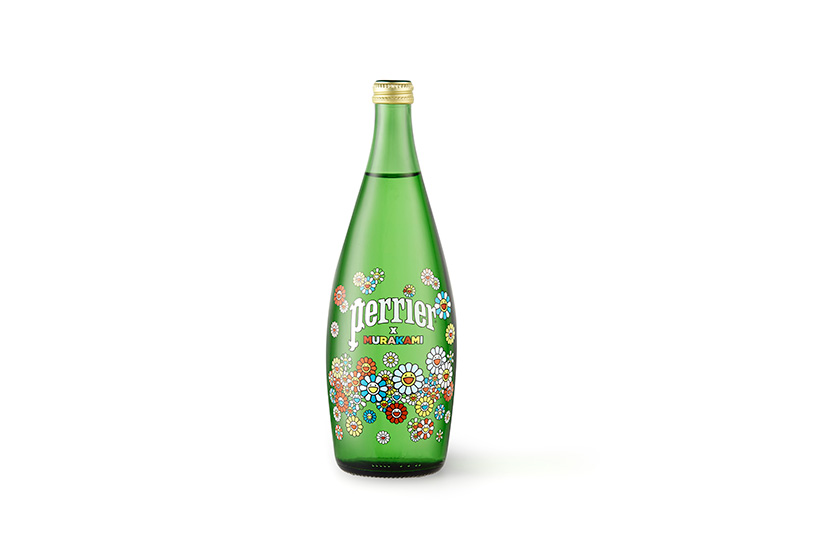 DB: you have cited andy warhol as a big reference and have been compared to him many times. what’s it like to join him in perrier’s roaster of artists?

TM: I am delighted to be the latest artist in perrier’s line-up of impressive and distinguished artists from all over the world. andy warhol, in particular, was a genius of collaborations. 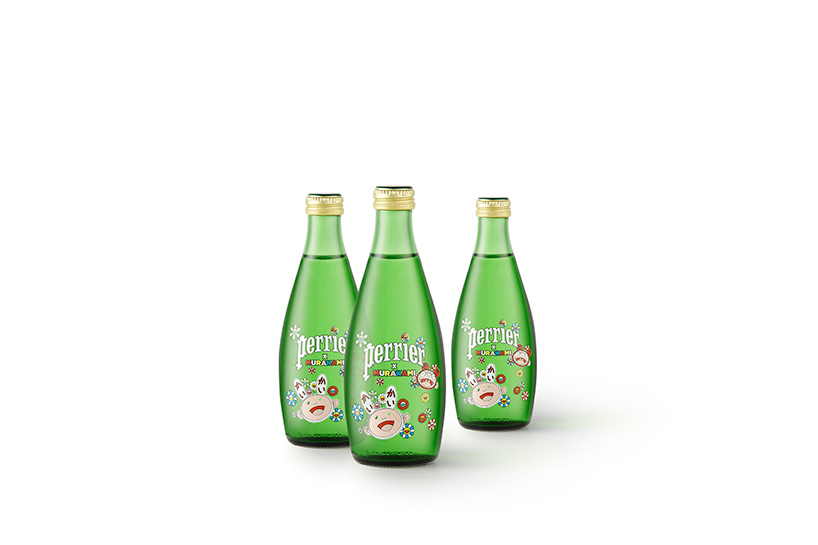 TM: when I was a senior in high school, it became apparent that i would never pass the university entrance examinations with my academic ability alone, so I decided to change my course and aim for art universities. it took me two years of retaking the exams to be accepted, but that’s how I came to pursue painting as my vocation.

DB: you are very active on instagram. what’s your relationship with social media?

TM:it’s a breather for me, a place to let off my steam. contemporary art enthusiasts tend to have a limited, narrow range of understanding in terms of the realm of interest, but i myself have been interested also in street culture, anime and sci-fi geek culture, fashion, and toys. for a long time I was searching for those with whom I could discuss these wide range of interests, but it wasn’t possible to meet them when I was young. now, I have met a number of kindred spirits through social media. I’m so glad. 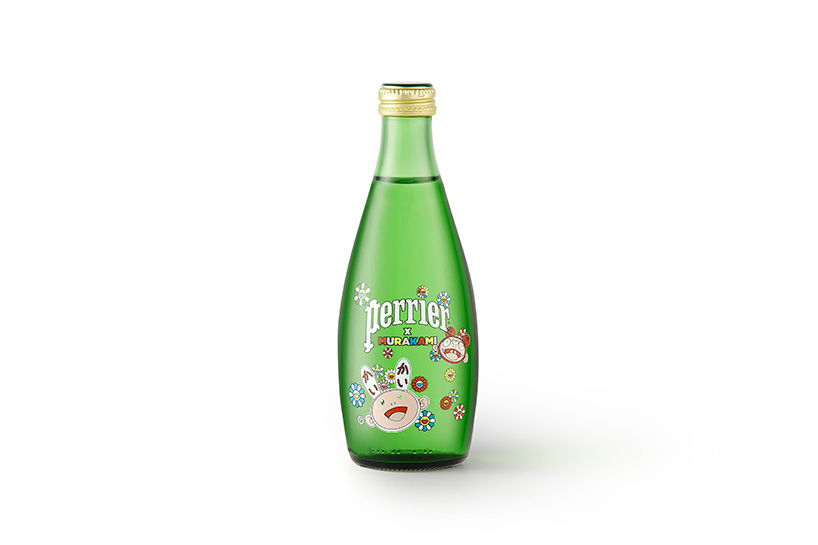 DB: are you a collector? if so, what do you collect?

DB: any advice for the young artists/creatives?

TM: I believe those who can lay themselves bare are the true creators, but it’s very difficult to really tell your story honestly. you can’t help posing in one way or another. with young artists, my approach is to coach them in order to remove such limiting factors. 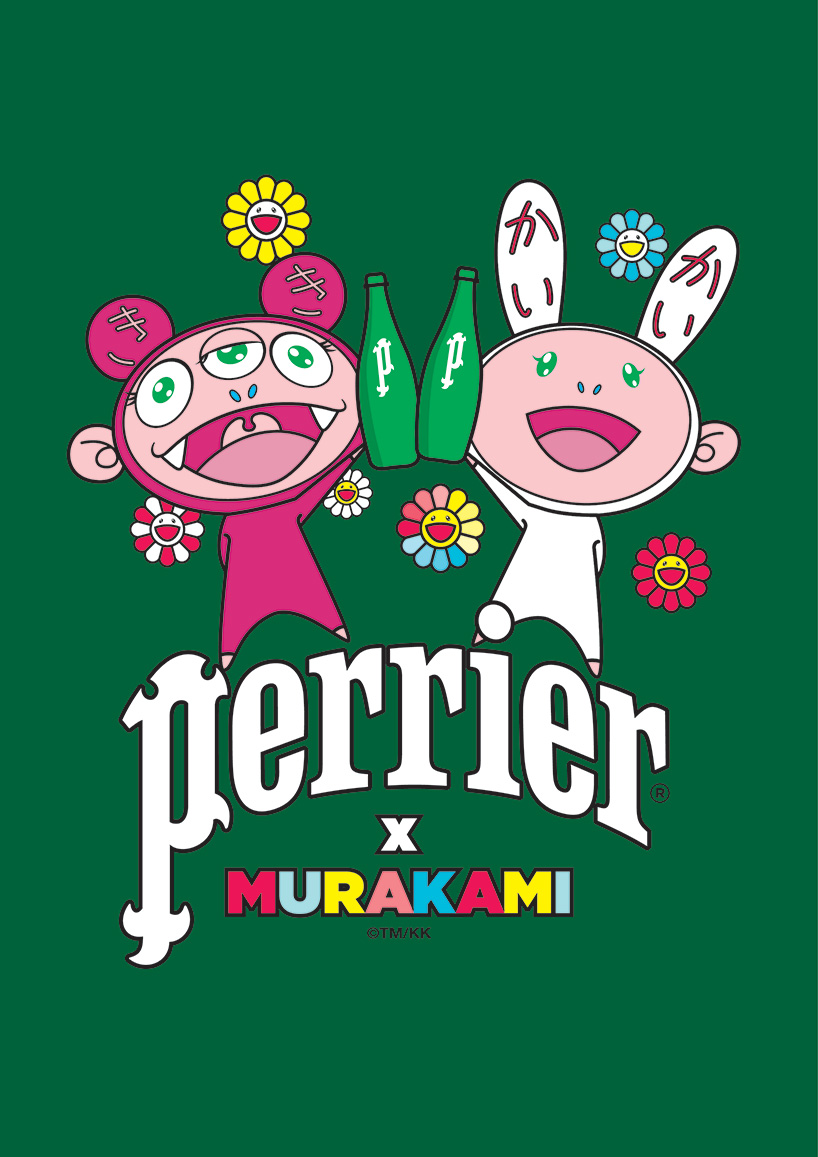 considered one of the most important japanese artists of our generation, takashi murakami draws from traditional japanese painting, sci-fi, anime, and the global art market. his work comprises paintings, sculptures, and films featuring repeated motifs and mutating characters of his own creation. associated with the smiling flower motif and playful characters, murakami has captured his bright imagery —including the flowers and two of his best known characters kaikai and kiki — on the new perrier® bottle. 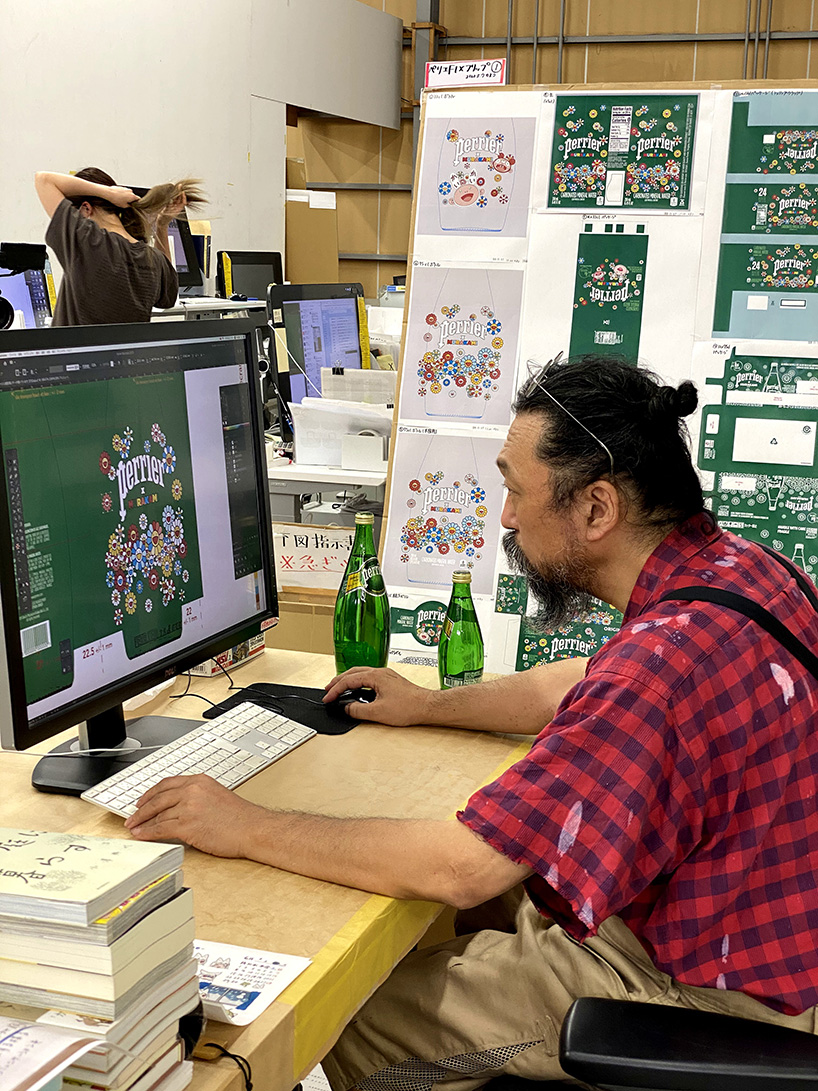 ‘takashi murakami is one of the most prominent contemporary living artists in the world,’ comments paul cordina, global communication manager, perrier®. ‘he has succeeded in creating art that is both accessible and deeply considered, with a flair for what is most fresh and most pertinent to the widest audience. the vibrancy and delight of murakami’s work is the perfect match for perrier®, a brand that has invested for over a century in creativity to bring out a differentiating brand spirit, tinged with its unexpected, crazy and original personality. 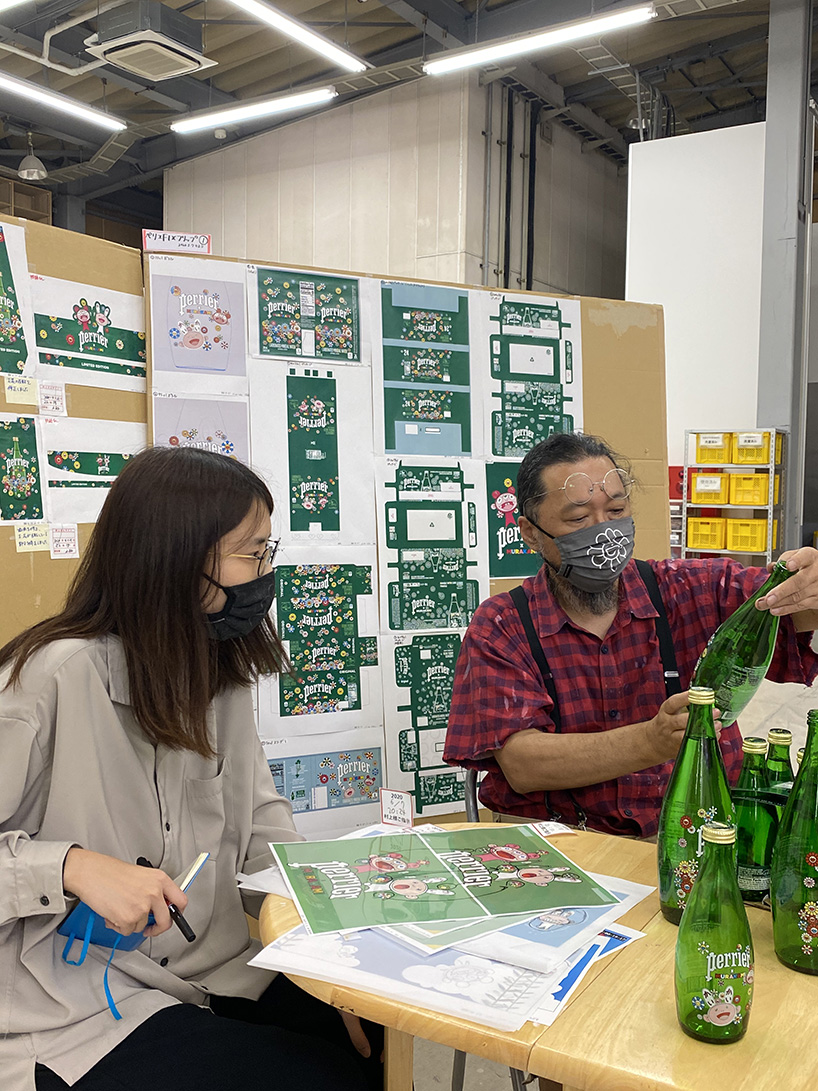 ‘the brand has inspired and collaborated with some of the world’s most famous and distinguished artists, such as andy warhol, salvador dalí, raymond savignac and bernard villemot, who have each in their own way established a touch of artistic irreverence, providing them a space of expression in the identity of perrier®,’ cordina concludes. ‘we hope that this collaboration, inspired by the pop and colorful universe of takashi murakami and the creative spirit of perrier®, will increase the accessibility of art for an even broader global audience.’’