following a wildly successful kickstarter campaign, the team behind the taxi fabric project is turning their dream of beautifying transportation through design into a reality. as one of the most convenient forms of transport, taxi cars have become a significant social and cultural aspect of daily life in mumbai. while drivers maintain great efforts in making sure their service stands out from the many competitors, very little attention is paid towards the cars’ aesthetic appearance. ‘design — as a job or studied at school — is unfortunately not widely recognized in india’ the taxi fabric team explain. ‘older generations don’t understand it. design to them just performs a function. many people don’t know that design can create a real impact. with so few spaces for young people to show off their skills, it’s hard to change that perception.’ 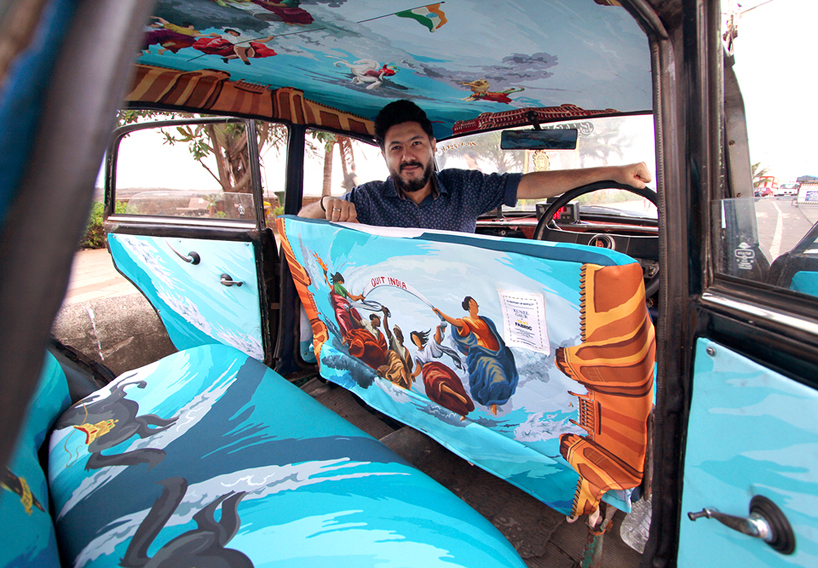 the team plans to outfit up to 30 taxis with colorful and creative compositions, printed onto fabric that lines the entire car interior. with the funds collected through kickstater, a group of emerging indian designers will show off their talent and storytelling skills by illustrating a design, printing it onto fabric, stitching upholstery and seat covers, and fitting the sheets onto the taxi. 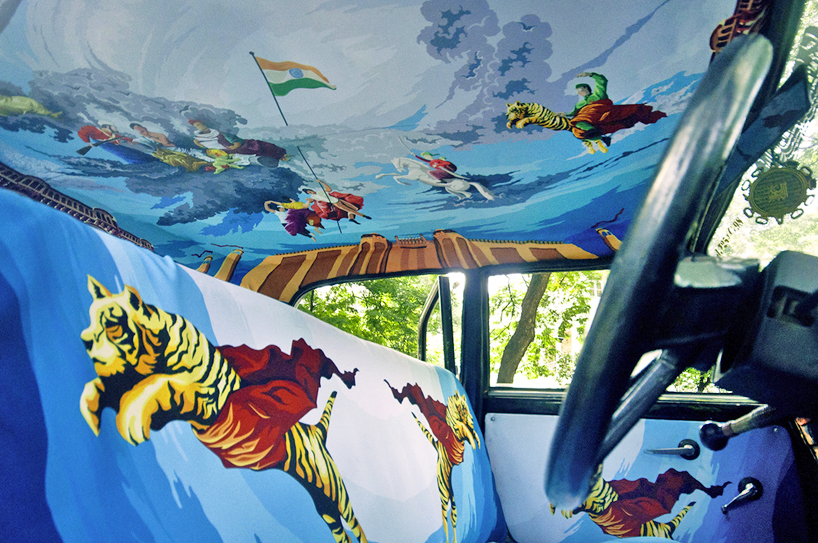 the tenth taxi fabric collaboration displays the work of artist kunel gaur. his composition ‘a century of revolt’ bears a painterly effect that canvasses the seats, ceiling and car doors. ‘my original idea was to do a fresco inspired piece around the indian independence’ gaur says. ‘I thought of dedicating it to those I admire for the courage and strength to carry on a war for freedom for over 100 years — the freedom fighters. I wanted to show them floating hand-in-hand in a utopian scene of a free india that they must have dreamt of when they took it upon themselves to fight for it.’ 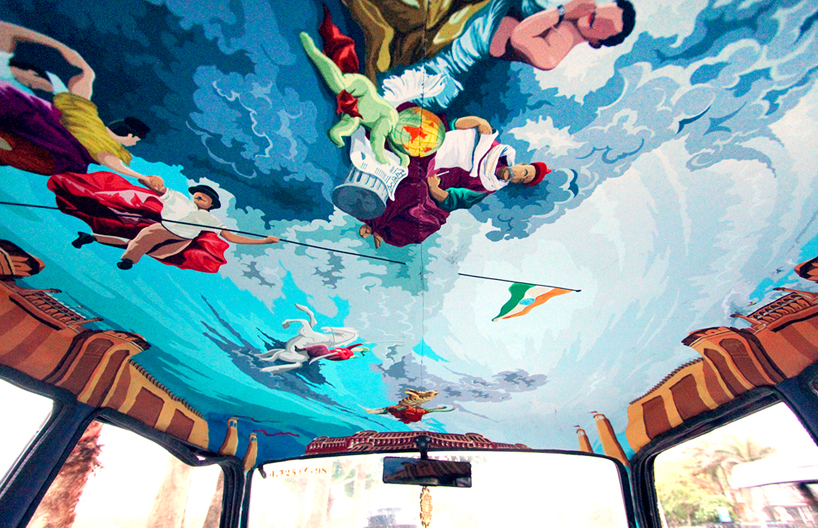 the design is spread over 8 meters of taxi fabric 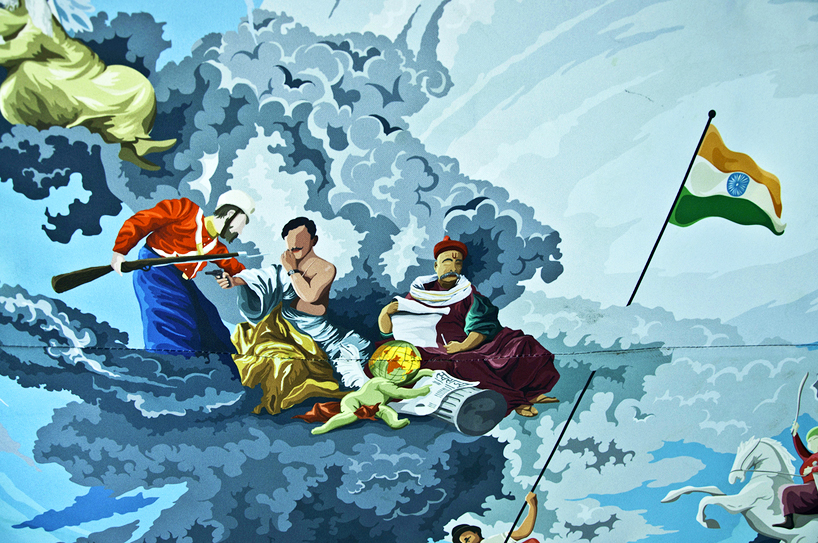 the scenes depict the story of indian freedom fighters 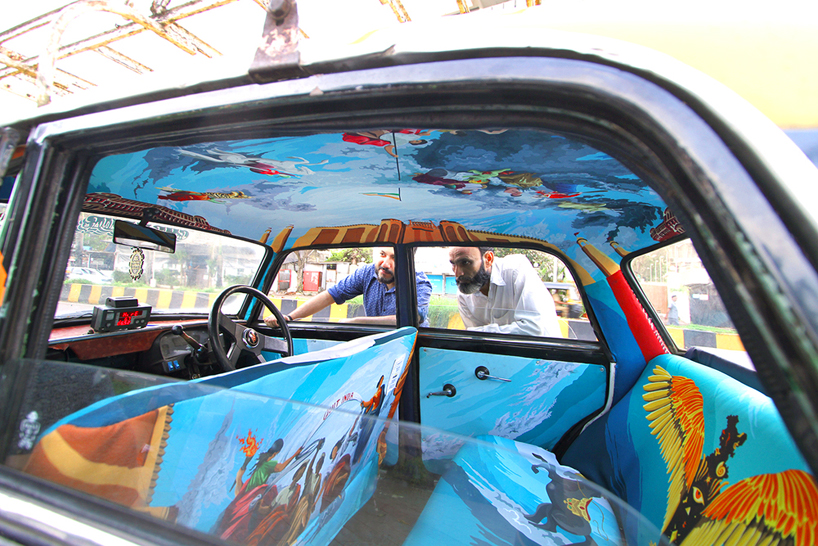 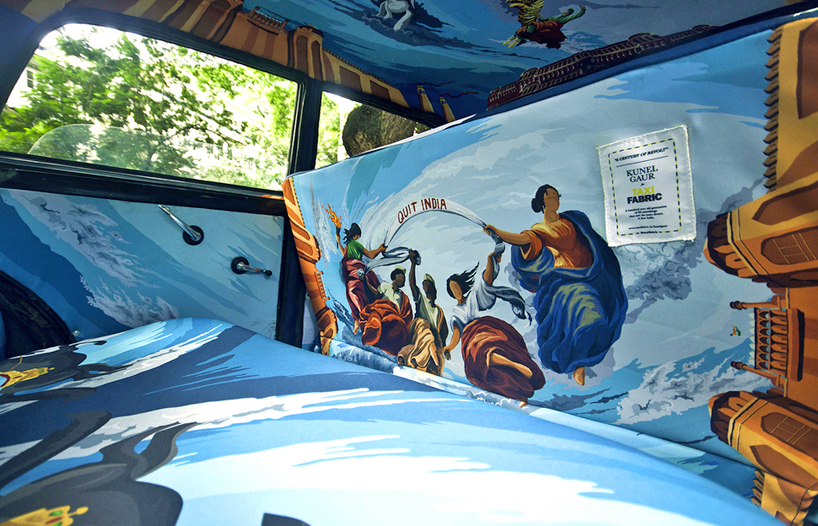 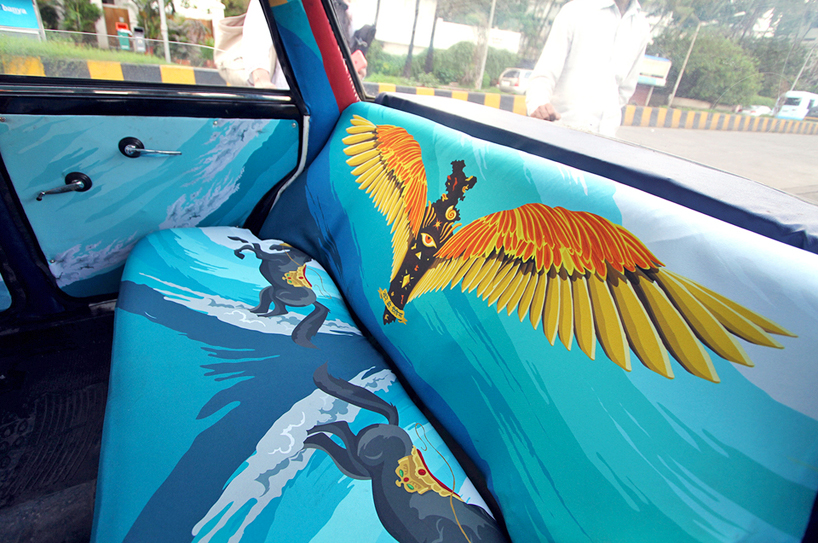 blue hues set the backdrop for a vibrant illustration

samia arif, a young designer from pakistan has designed ‘monad’, a piece which is influenced by the similarities between indian and pakistani culture. speaking of her design samya says, ‘I was approached by taxi fabric to do a design for the upcoming independence days of both india and pakistan. I based my designs on the idea that indians and pakistanis are essentially the same people, coming from similar roots and focusing on our commonalities and unique characteristics at the same time.’ 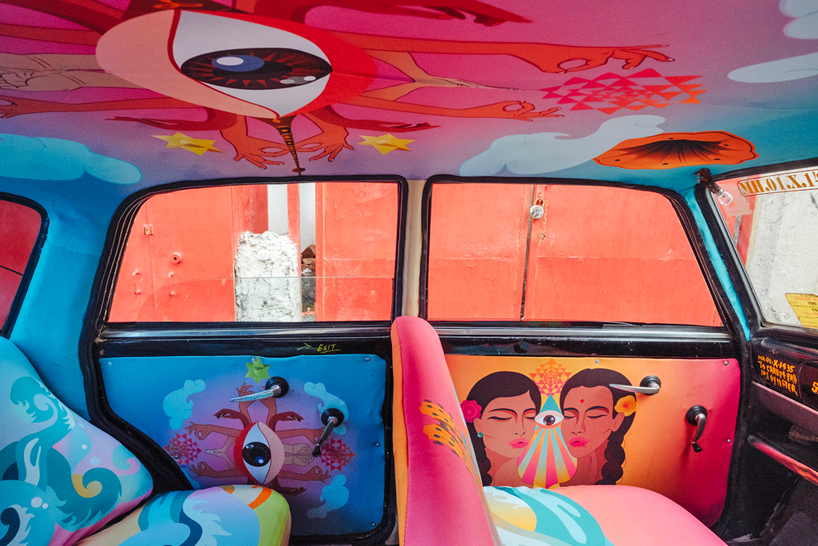 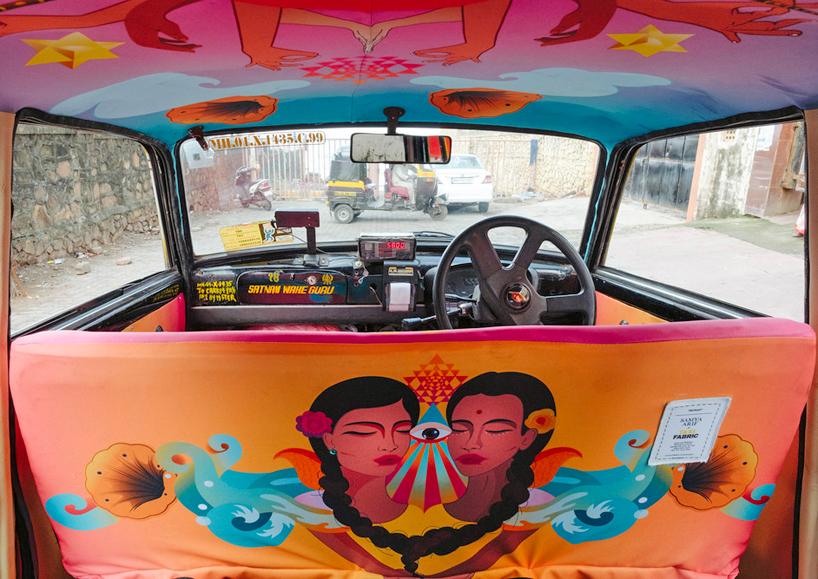 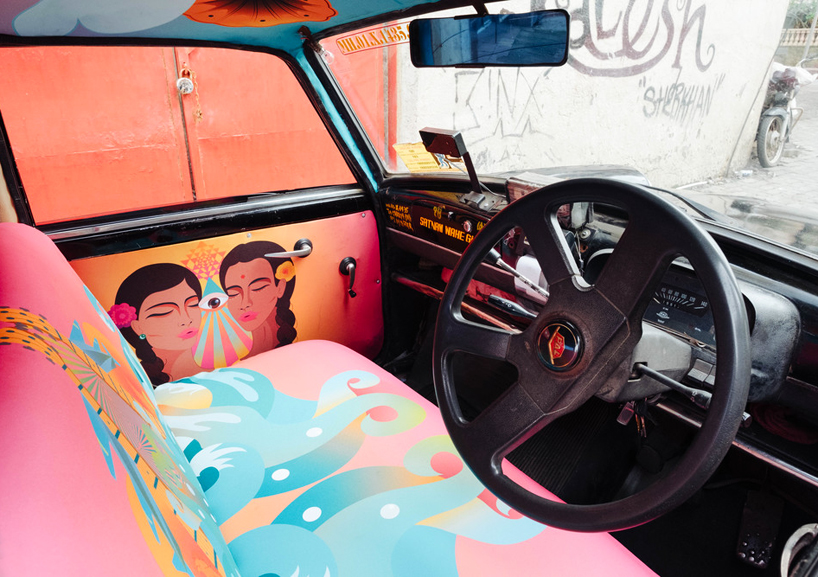 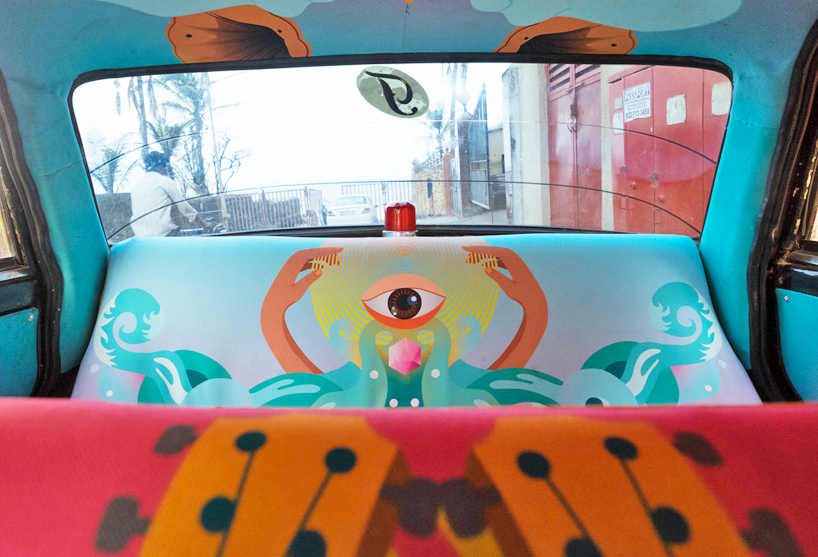 a colorful seascape is the background for a vibrant visual collage 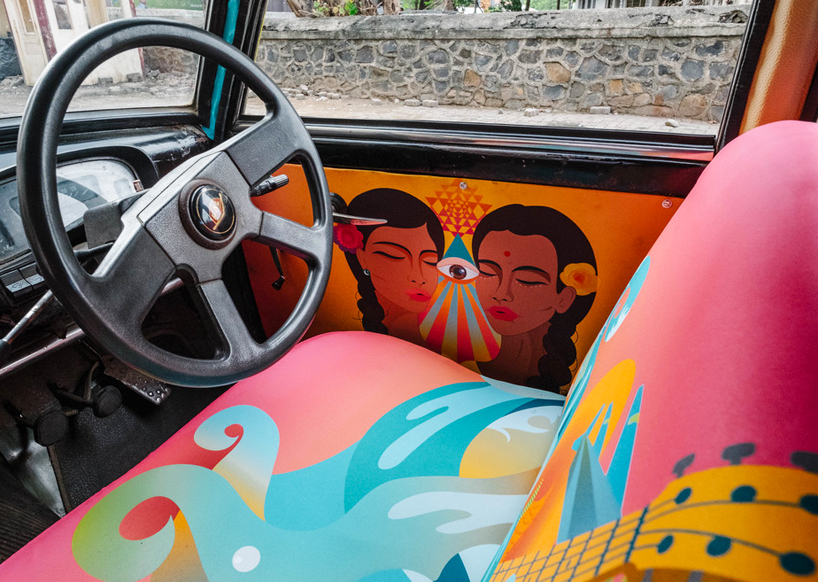 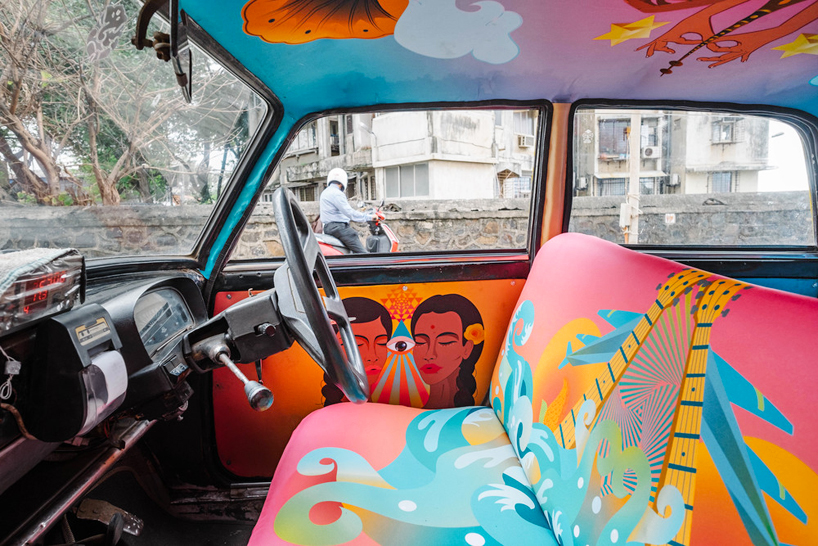 ‘design can help people understand and communicate with each other better’, arif says of her work 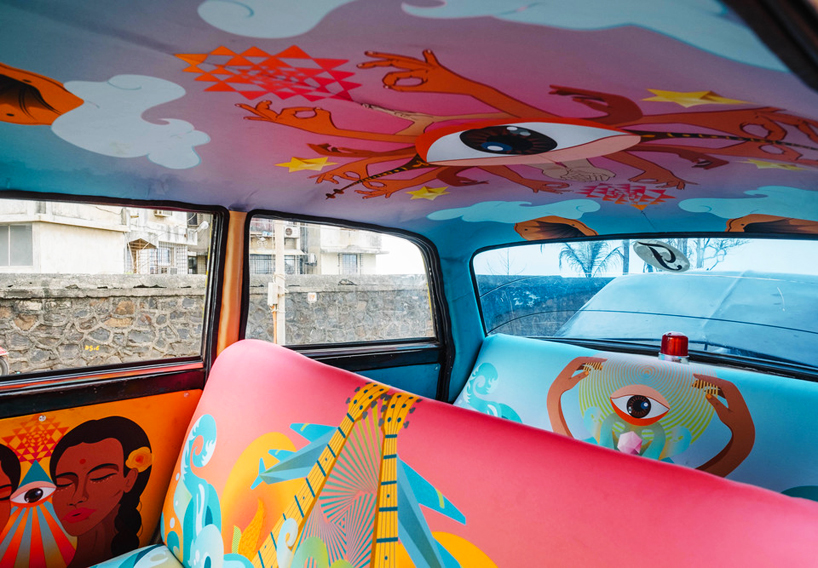 the ceiling, seats and car doors are lined with vibrant illustrations 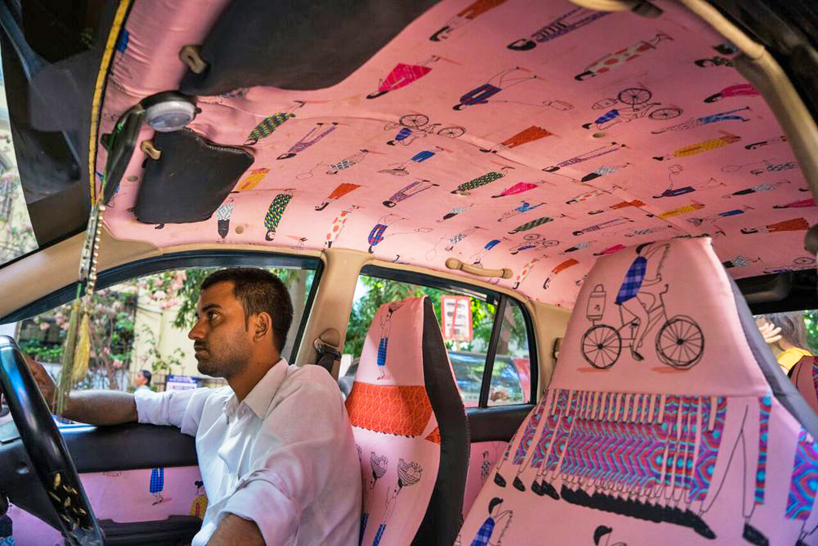 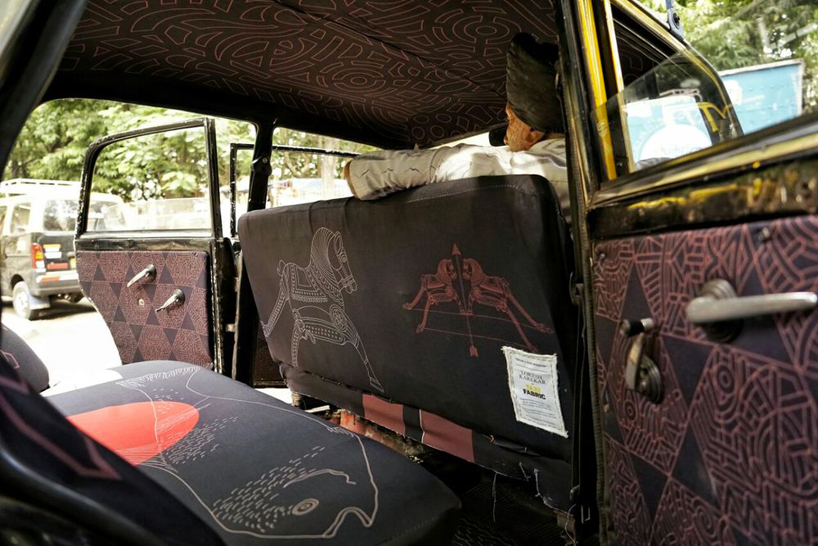 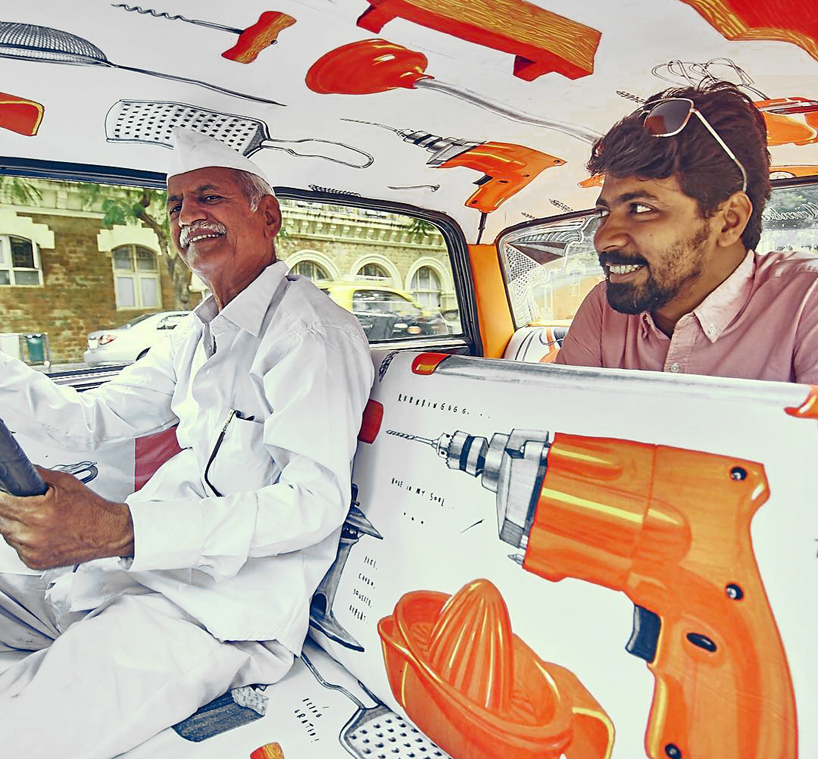 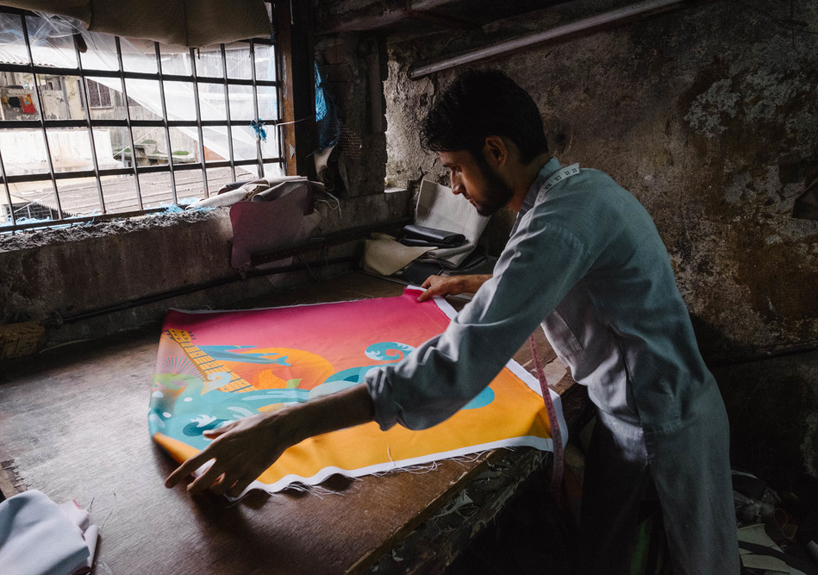 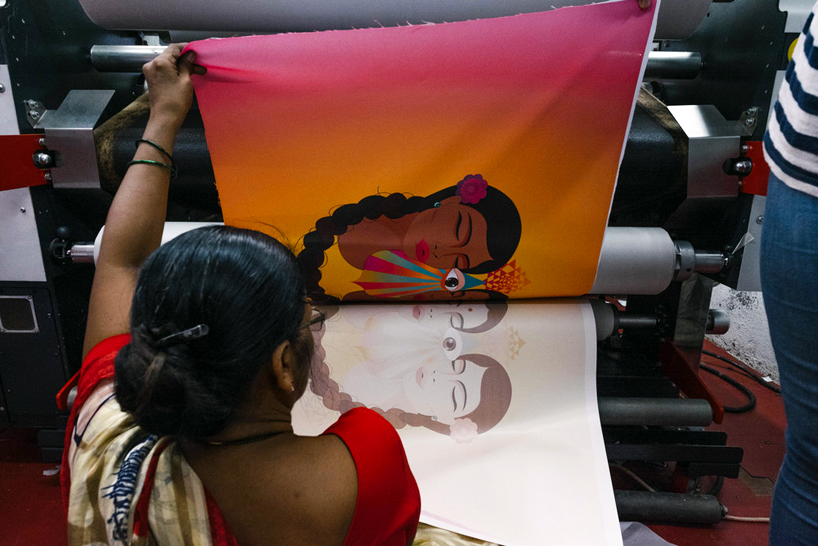 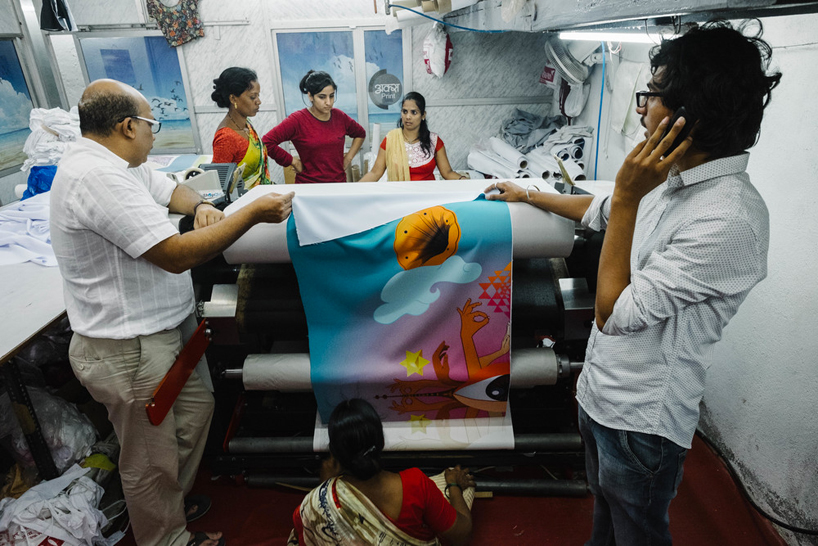 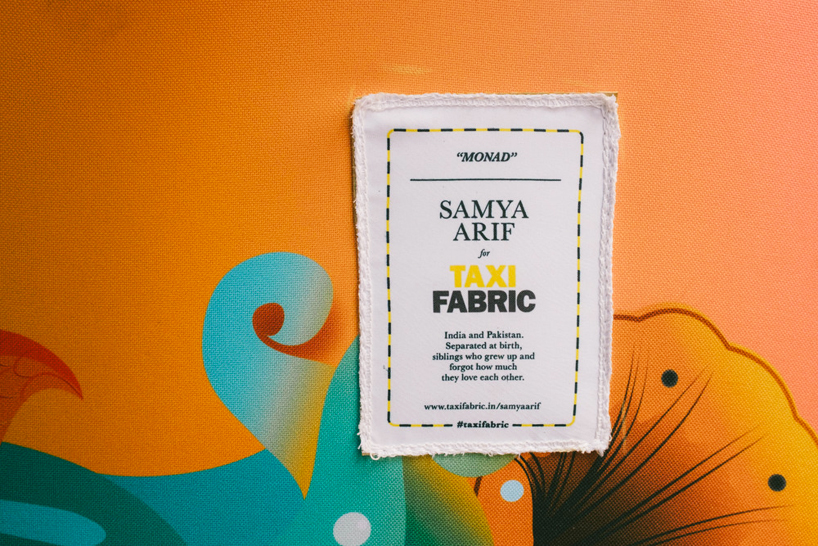 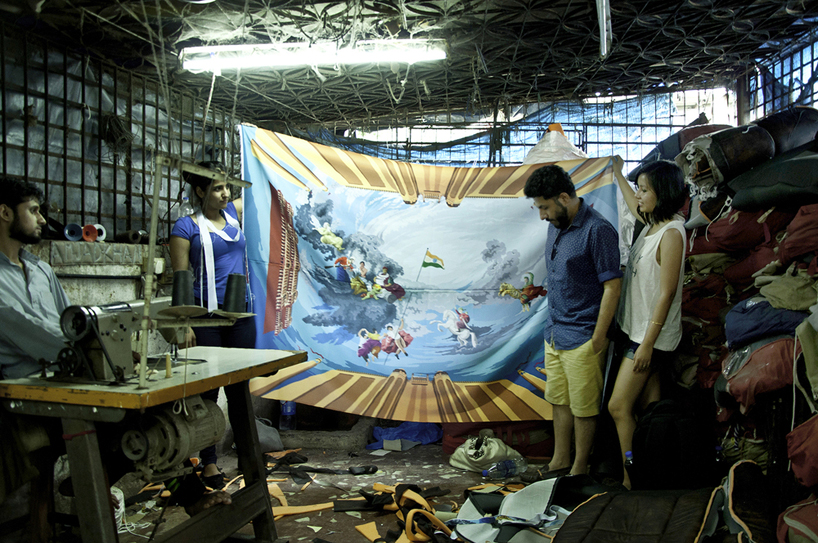 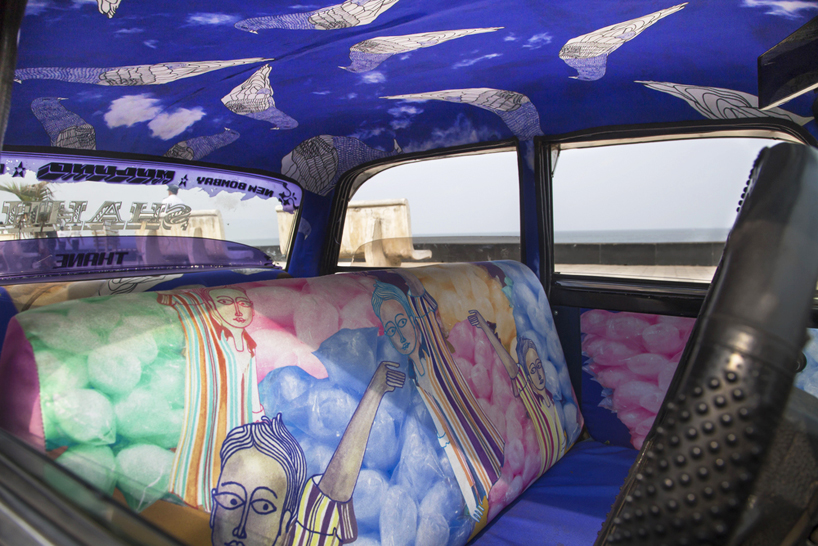 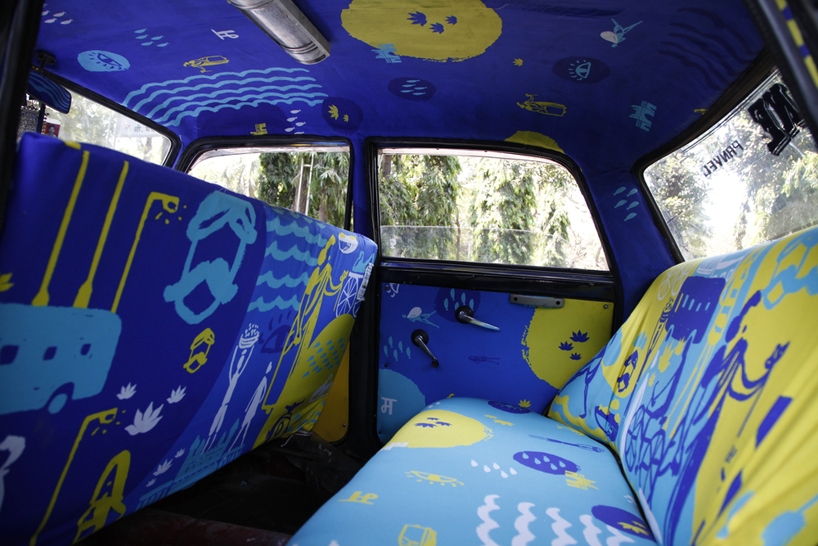 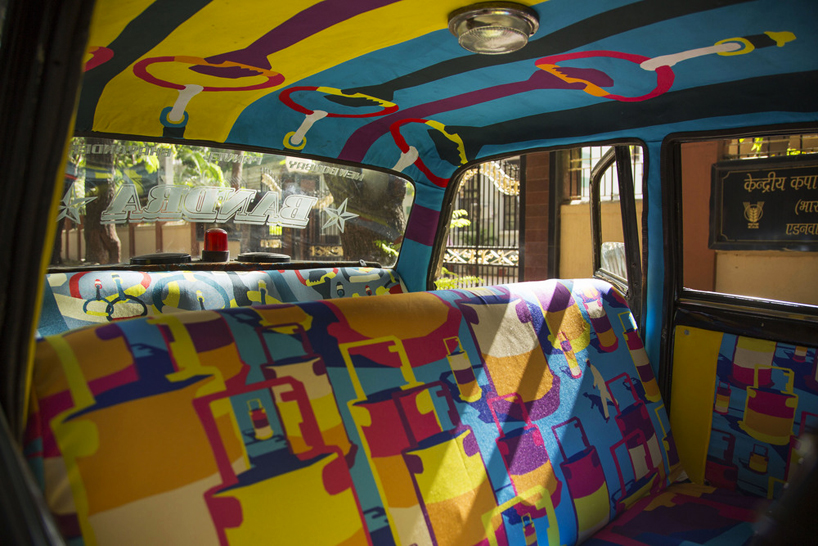 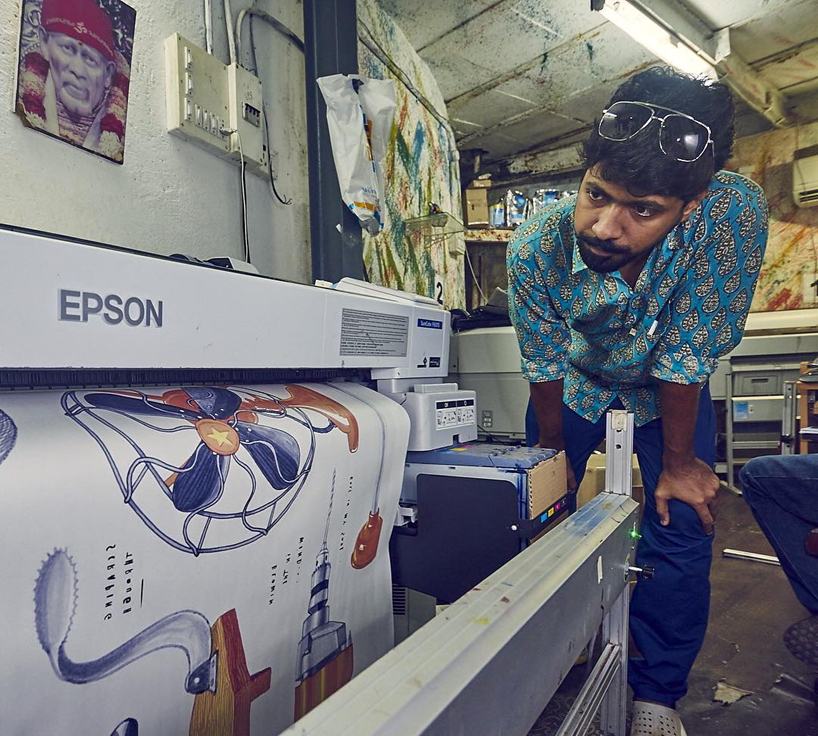