in often overlooked wooded areas on the outskirts of copenhagen, danish artist thomas dambo has installed six, oversized ‘forgotten giants’. forming an artistic, open air treasure hunt for the public to experience and enjoy, dambo’s huge wooden creatures are ‘hidden’ in rødovre, hvidovre, vallensbæk, ishøj, albertslund and høje taastrup. all six sculptures have been carefully crafted from recycled scrap wood, and have been built alongside the help of local volunteers. 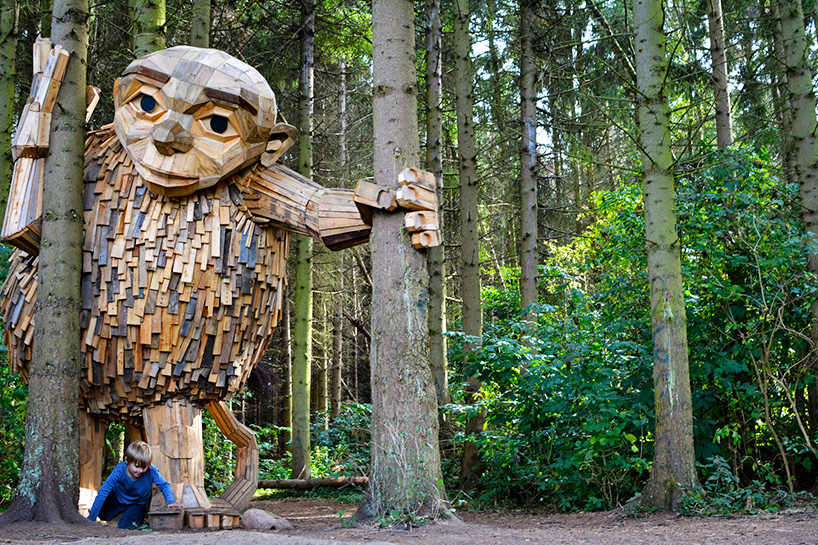 ‘little tilde’ in installed in vallensbæk

‘little tilde’, ‘teddy friendly’, ‘thomas on the mountain’, ‘oscar under the bridge’, ‘hill top trine’, and ‘sleeping louis’ are hidden in ‘secret’ locations across the danish woodland. each of the six giants have been built by hand by dambo and a team of volunteers, who sourced scrap wood from local fallen trees and broken down buildings. completely unique, the enormous figures can each be engaged and interacted with, like ‘little tilde’ who hides 28 birdhouses inside its belly, and ‘sleeping louis’, whose gaping mouth can be entered and played within. 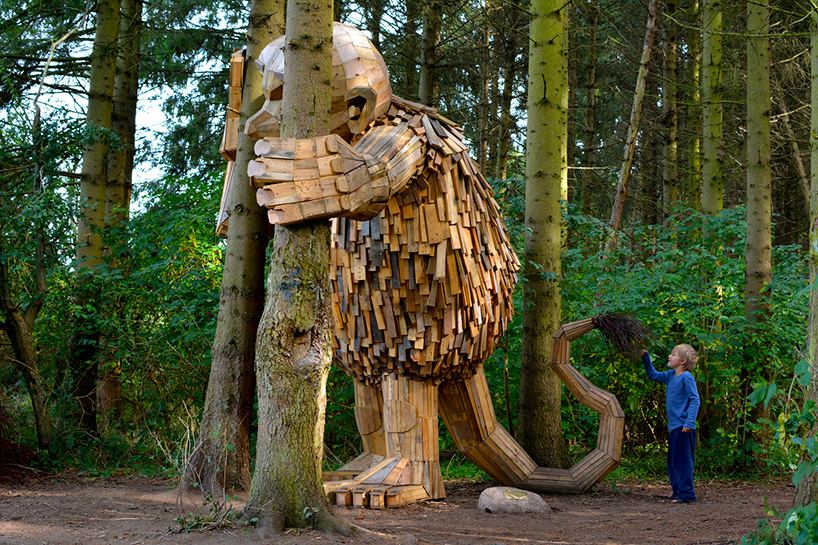 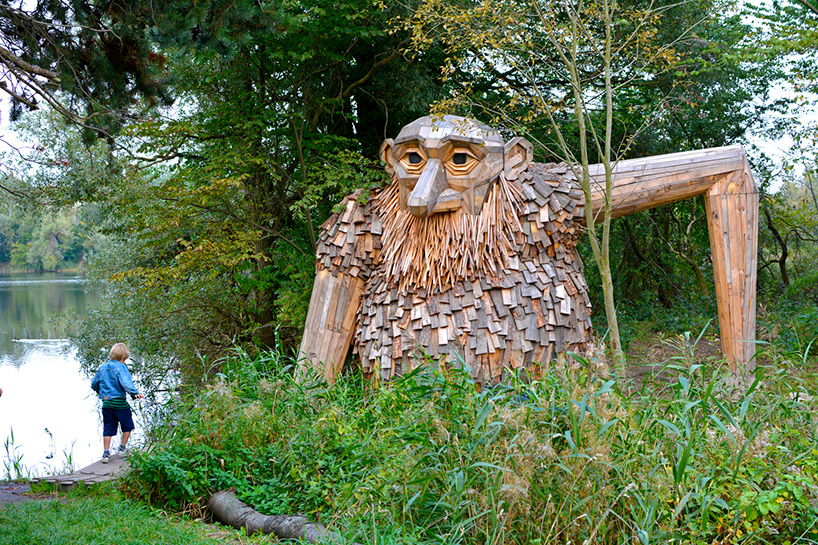 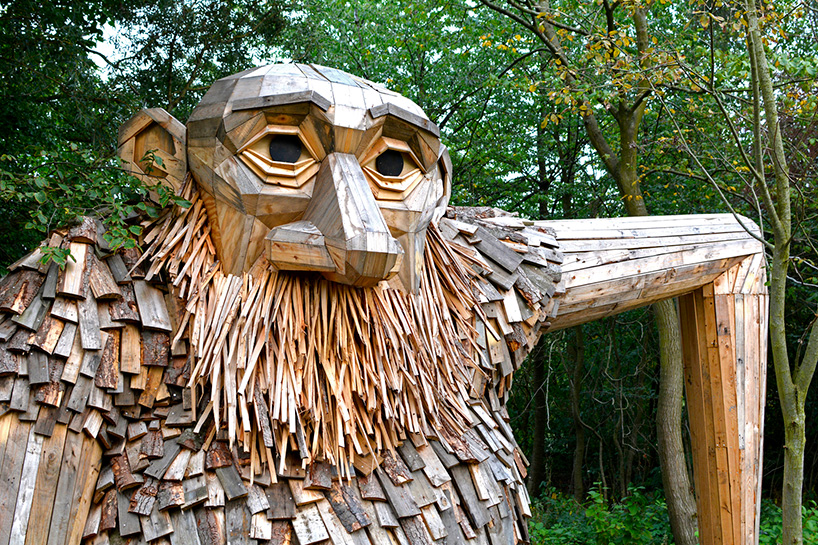 local trees have been used to create the figure’s ‘fur’ 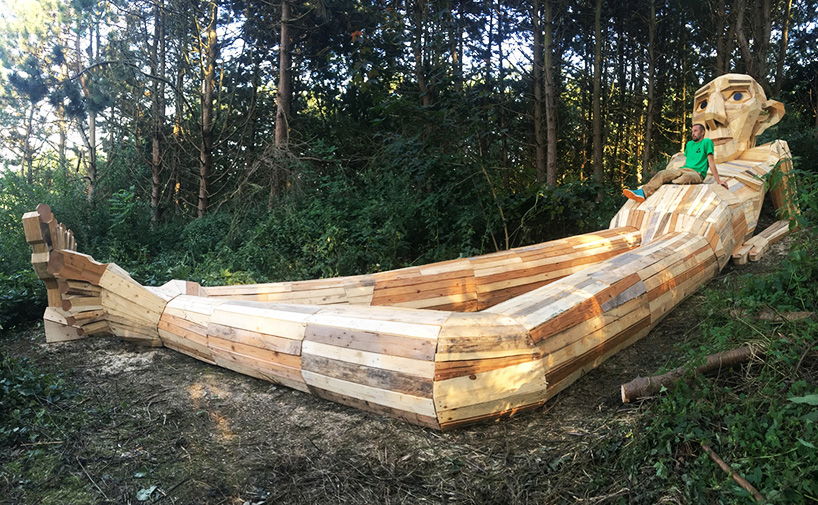 ‘thomas on the mountain’ can be found in copenhagen 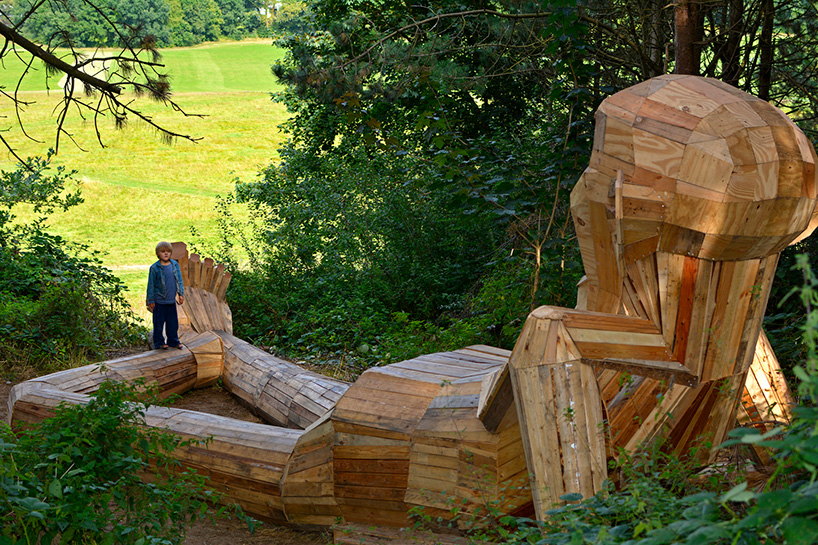 sitting on the top of a hill, ‘thomas’ overlooks the municipality of albertslund 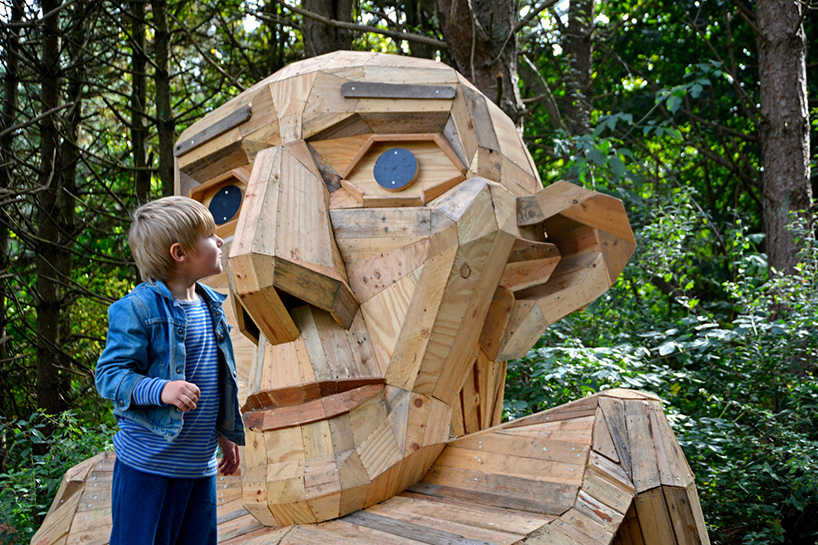 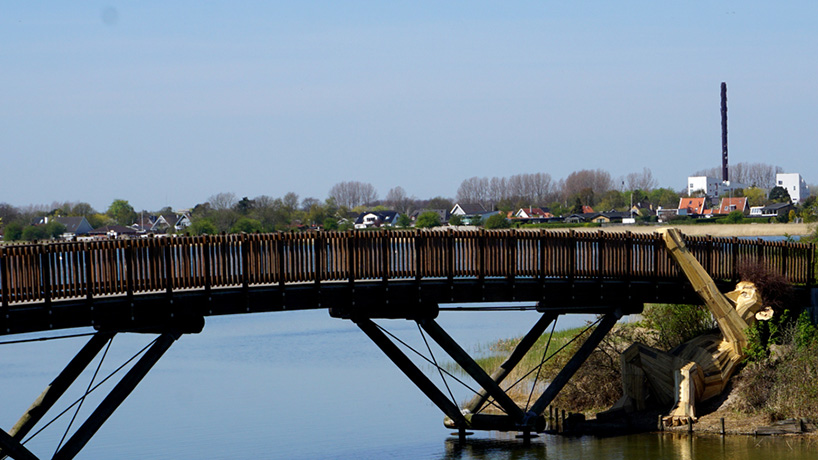 ‘oscar under the bridge’ is installed in ishøj 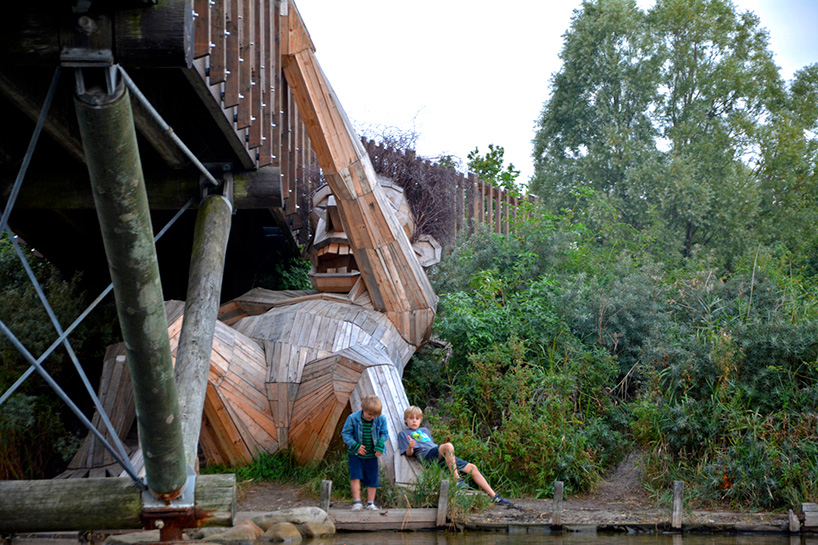 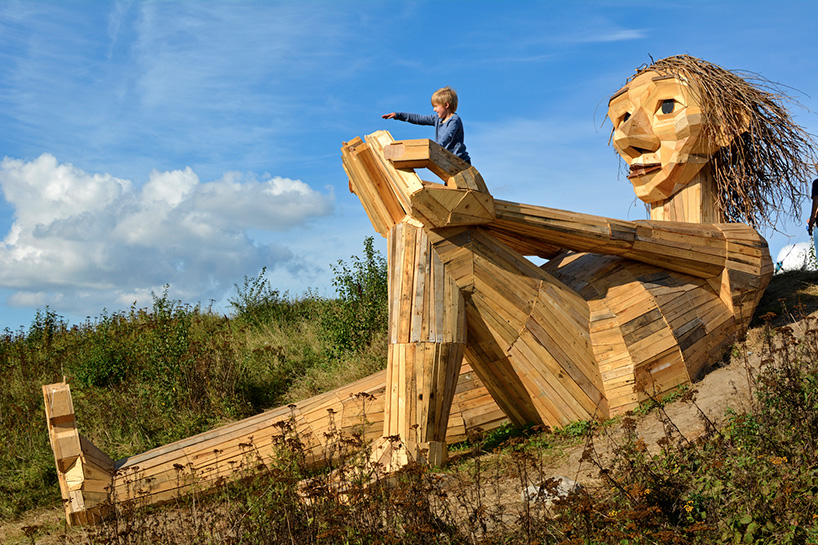 ‘hill top trine’ can be spotted in copenhagen 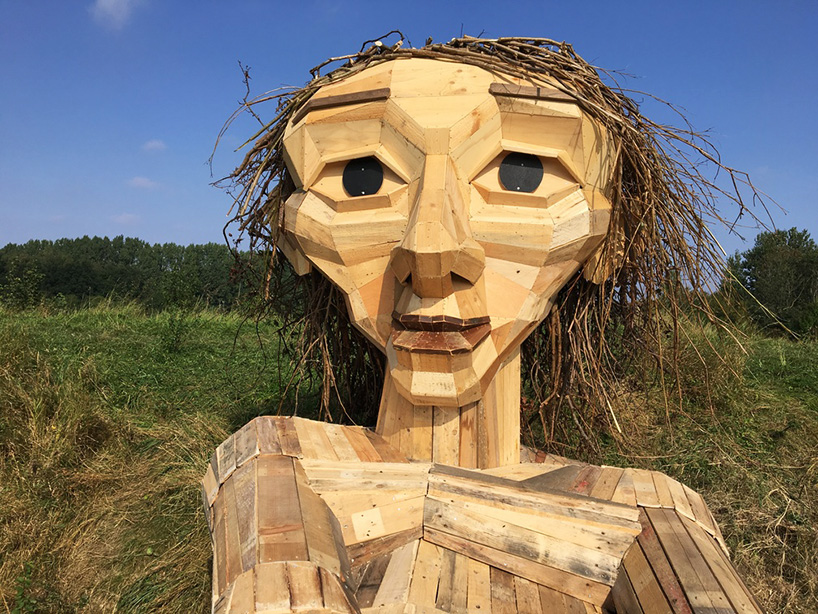 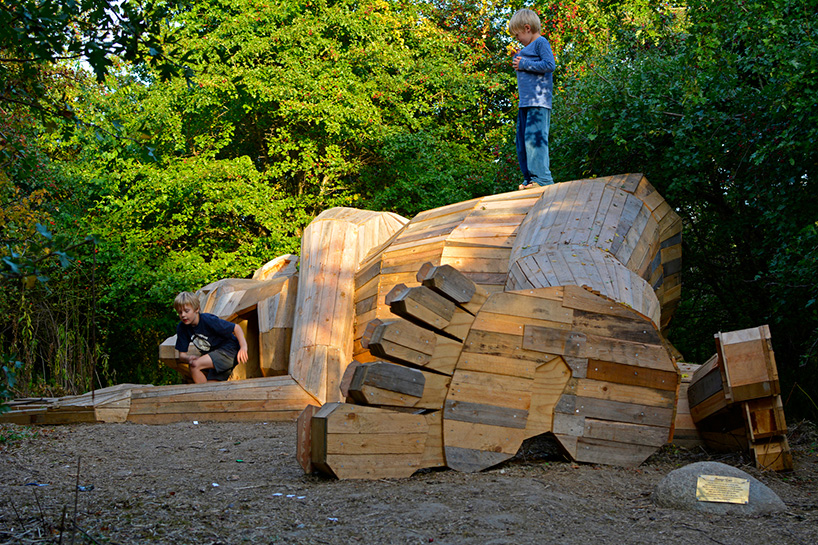 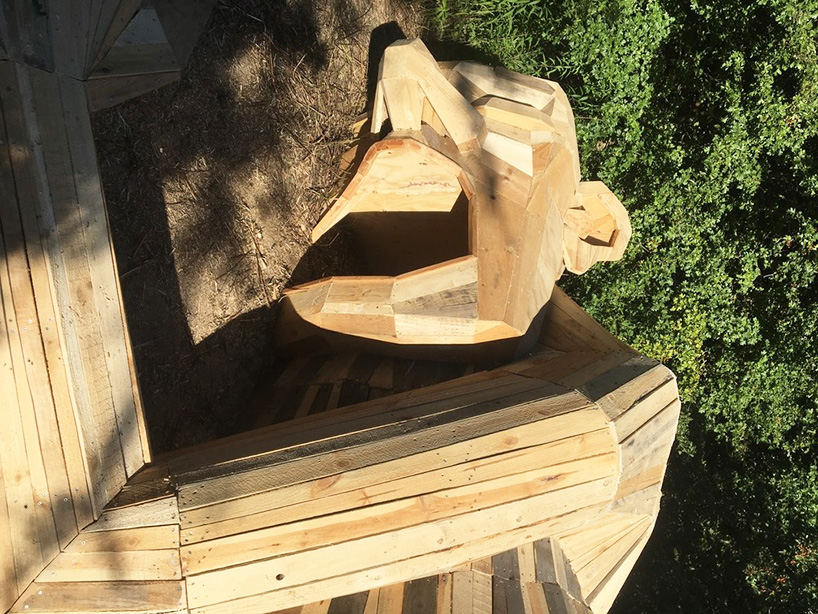 people can crawl into his gaping mouth, play or even sleep inside of him