japanese creative group secca has combined 15.000 pieces of artificial wood into an intricate sculpture that resembles a three-dimensional puzzle. titled ‘A↔︎UN’, the piece depicts a pair of a-un komainu (guardian lion-dogs), made by connecting each individual pixel-like piece to the next. the project explores how digital technology impacts our relationship with nature by combining traditional japanese techniques and concepts with cutting-edge technology.

all images courtesy of secca

‘can digital replication technology create a one-of-a-kind world?’ asks secca. with ‘A↔︎UN’, the japanese group of creators explores the desire of humans to mimic nature through advances in technology. the three-dimensional sculpture is made of 15.000 pieces of artificial wood that together form a pair of guardian lion-dogs. the pair is enclosed in a series of frames that resemble a digital device, representing a parallel world that countlessly exists in a virtual space projected by the front and back mirrors.

‘humans have admired and envied what nature is capable of creating, and in the process of desperately trying to mimic and artificially replicate those creations, we have made advances in technology,’ explains secca. ‘what may have started as figurative painting, the act of replicating a scene observed by a viewer, has now become capable of recreating the structural colors of morpho butterflies, organs, genes, and even personality traits of an individual. wood too can be artificially produced just like the others. while it was originally done two dimensionally by printing simple wooden patterns on flat surfaces, the cutting edge 3D-printing technology has evolved to the point where it is capable of reproducing the finest bumps of a vascular bundle, making it difficult to distinguish man-made from real wood. we like to have trees around, but never being satisfied with what we have, we create artificial ones that are more convenient to us. what we are enjoying in the end is a space surrounded by fake trees that look real.’

the three-dimensional object is made by connecting pieces that look like pixels, similar to a virtual image that has been materialized by digital data. depending on the viewer’s angle, the back side of the artificial wood structure becomes apparent, showing all the imperfections of the digital world. the frame that encases the two komainu sculptures resembles a digital device that invites visitors in a virtual space projected by the front and back mirrors. according to secca, it depicts how strongly people in today’s society value diversity and are diversifying the subjects they seek comfort in, extending out into the digital world. ‘A↔︎UN’ is part of the exhibition ‘kiinseido: hirakushi denchu and works connecting tradition with the future’ at the meiji jingu forest festival of art in tokyo. 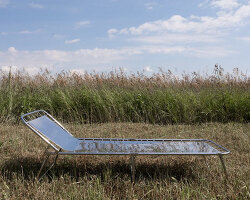 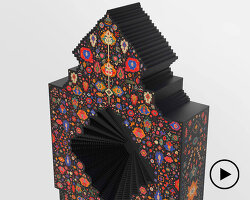