on view until february 14, 2021, tomas saraceno’s ‘moving atmospheres’ at the garage museum of contemporary art takes us a step closer toward an aerocene epoch. for more than a decade, saraceno and the multi-disciplinary community group aerocene have been exploring ideas for a new era, a new way of being with the atmosphere through emissions-free travel, free from the carbon, extractivism, capitalism, and patriarchy that fuels some forms of life (you can see earlier iterations on designboom here and here, and read our interview with the argentinian artist here). suspended in midair, the monumental, partially-mirrored sphere presents a working prototype for a balloon that is able to float around the world, fuelled only by the air we breathe and the heat of the sun. 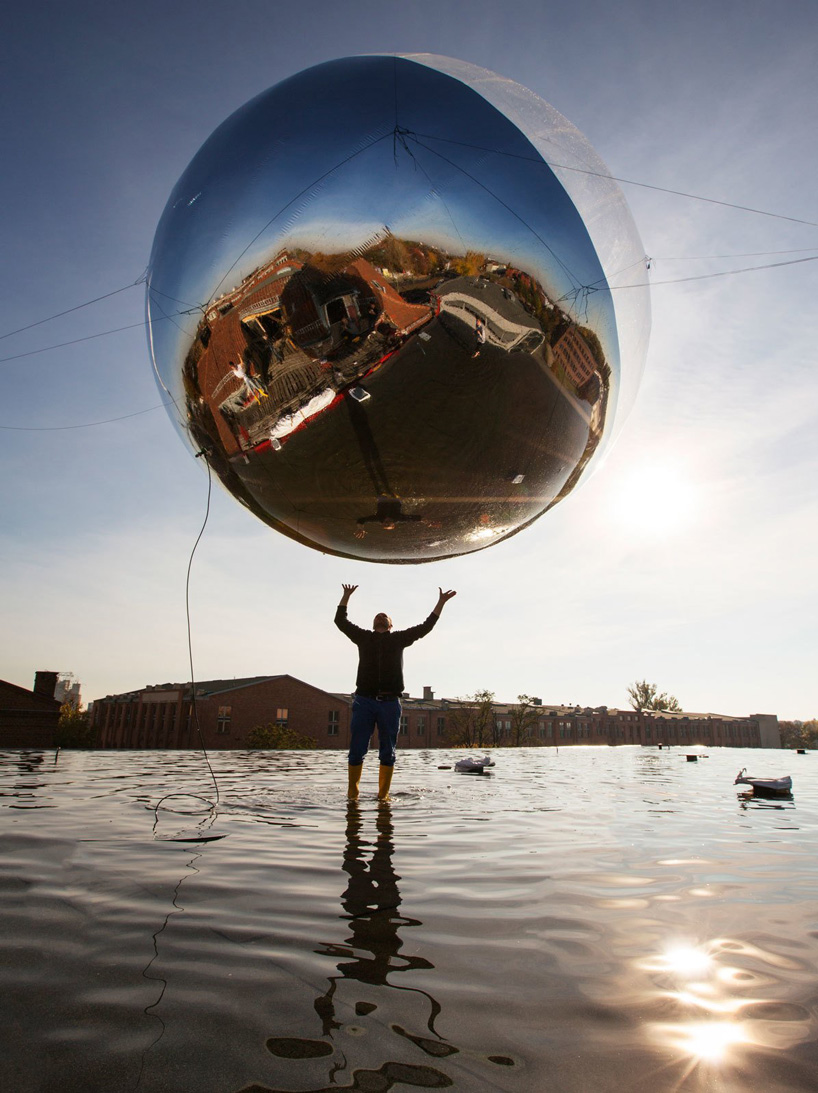 the tenth garage atrium commission, ‘moving atmospheres’ is a product of saraceno’s long-standing occupation with lighter than air movement and utopian modes of co-existing. the aerosolar sculpture is made of ETFE, an extremely durable translucent polymer, while it is modelled after a bigger structure, made of the same material, which is proven to sustain long-distance flights while floating at altitudes between 20 km and 40 km. the design of this sculpture builds on scientific experiments begun by the french centre national d’études spatiales (CNES), where tomás saraceno was artist in residence in 2012. 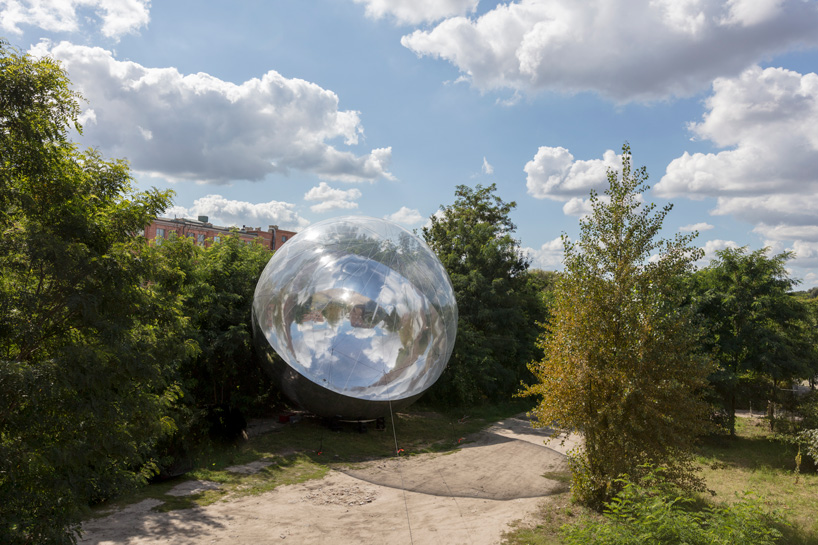 from the late 1970s, CNES began to launch infrared radiation balloons (montgolfière infrarouge, or MIR) into the upper levels of the atmosphere, made of two different lightweight materials: transparent and mirror foils. the mirror half reflects part of the sun’s radiation, thus preventing the air envelopes from overheating, while the transparent half helps maintain the temperature inside the envelope during the night. in ‘moving atmospheres’ saraceno works for the first time with ETFE, presenting a crucial next step in the development of aerosolar flights. 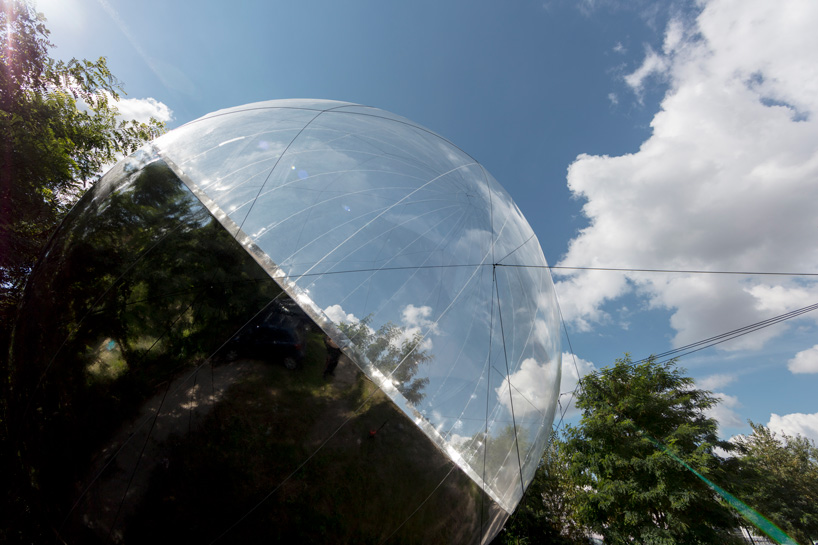 ‘the future is in the air!! as we float at the bottom of the ocean of air, we move into aerocene, an era that resists the gravity of today by keeping the temperature of the air stable so all passengers may stay aboard this journey!!,’ explains saraceno. ‘as you know we need to find alternative ways to move within the planetary boundaries and out of the colonialist, extractivist and patriarchal practices that keep fueling our economies, and find alternative social, environmental and mental ecologies of practice among all of us…to open up our thermodynamic imaginations, to float within an envelope of sun-heated air, to move with the wind…towards a movement of other orbits of interaction to keep us all together on this journey aboard this flying earth!!’ 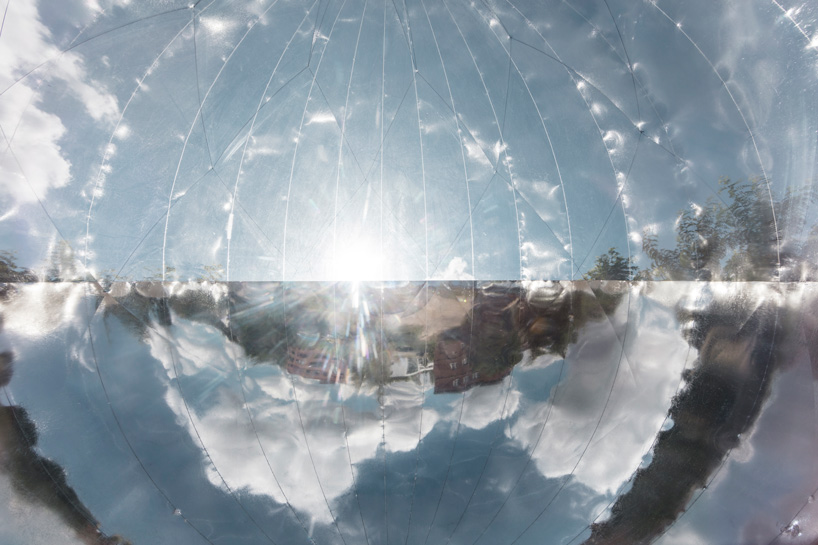 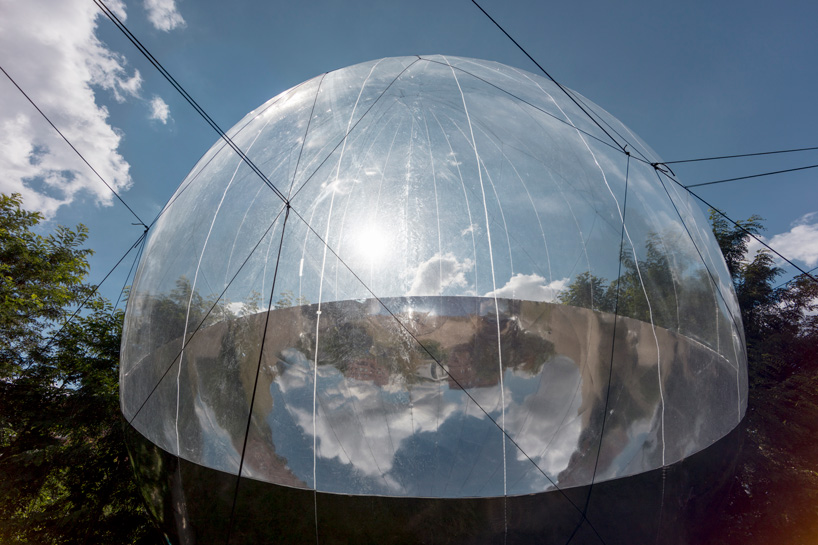 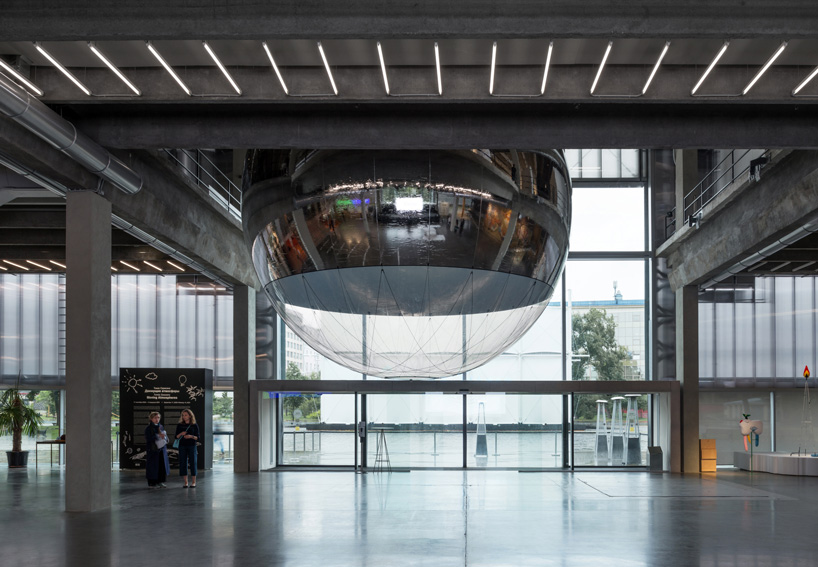 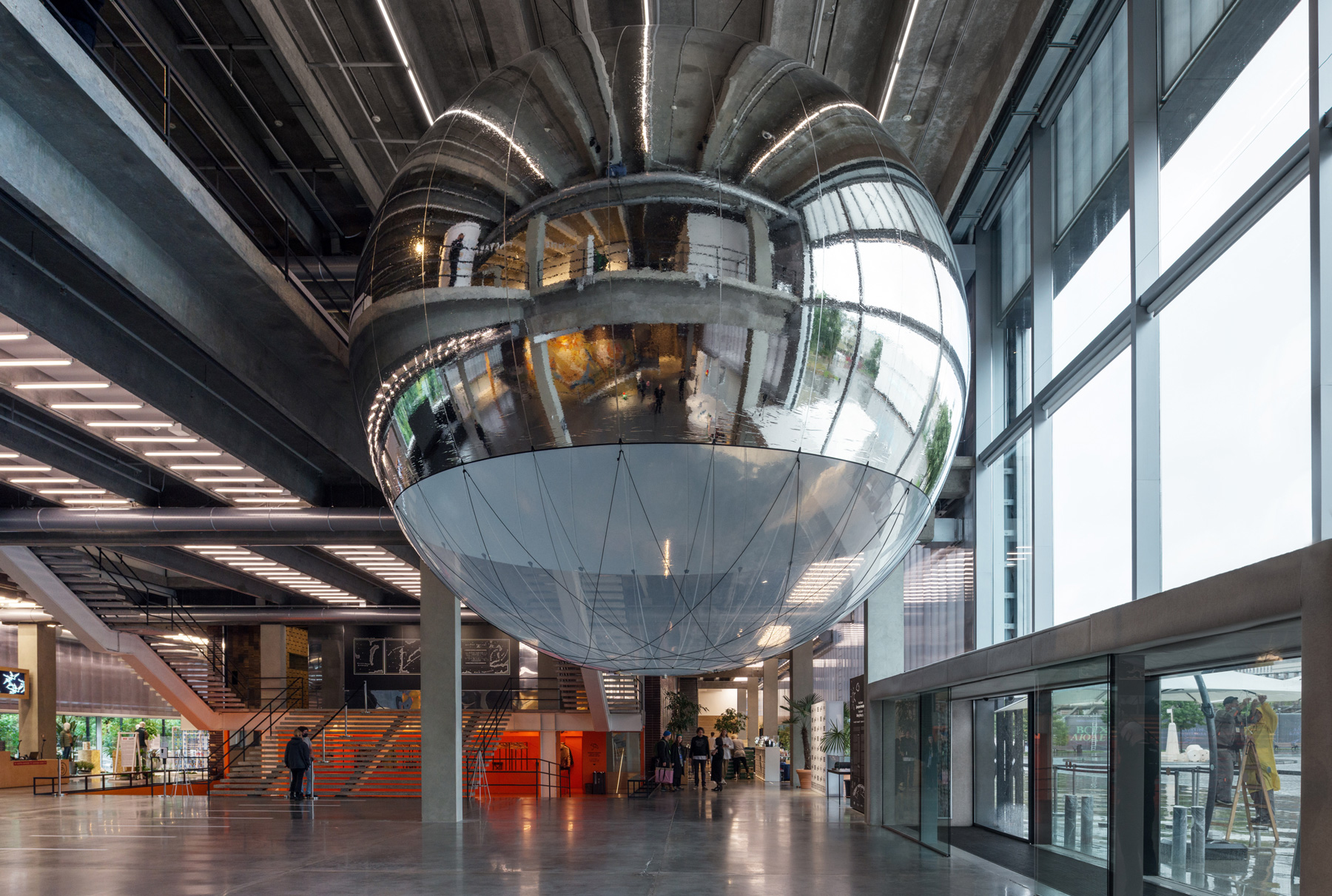 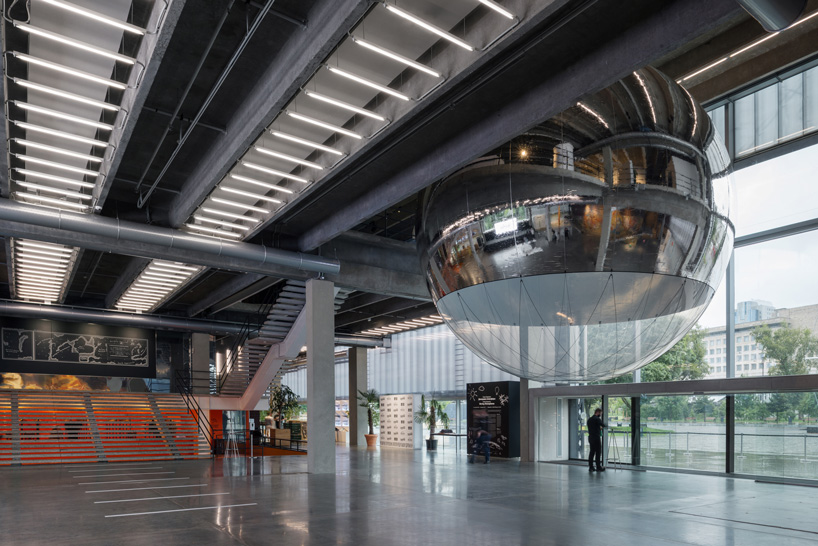 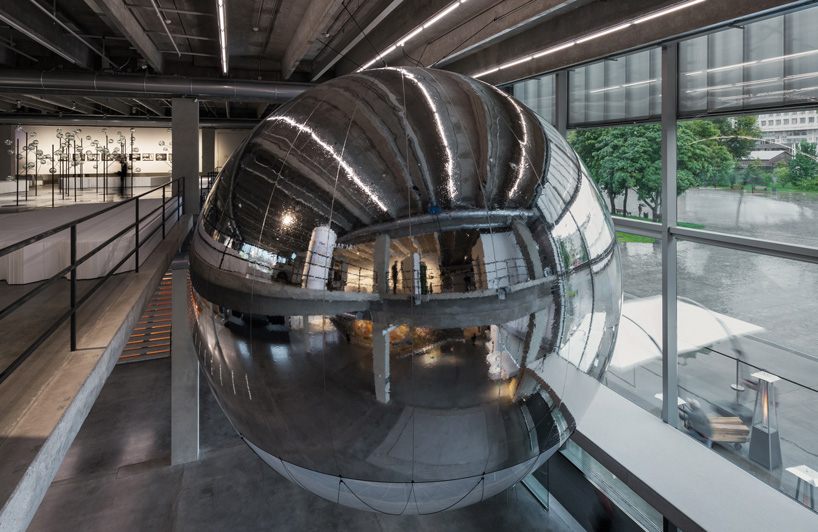 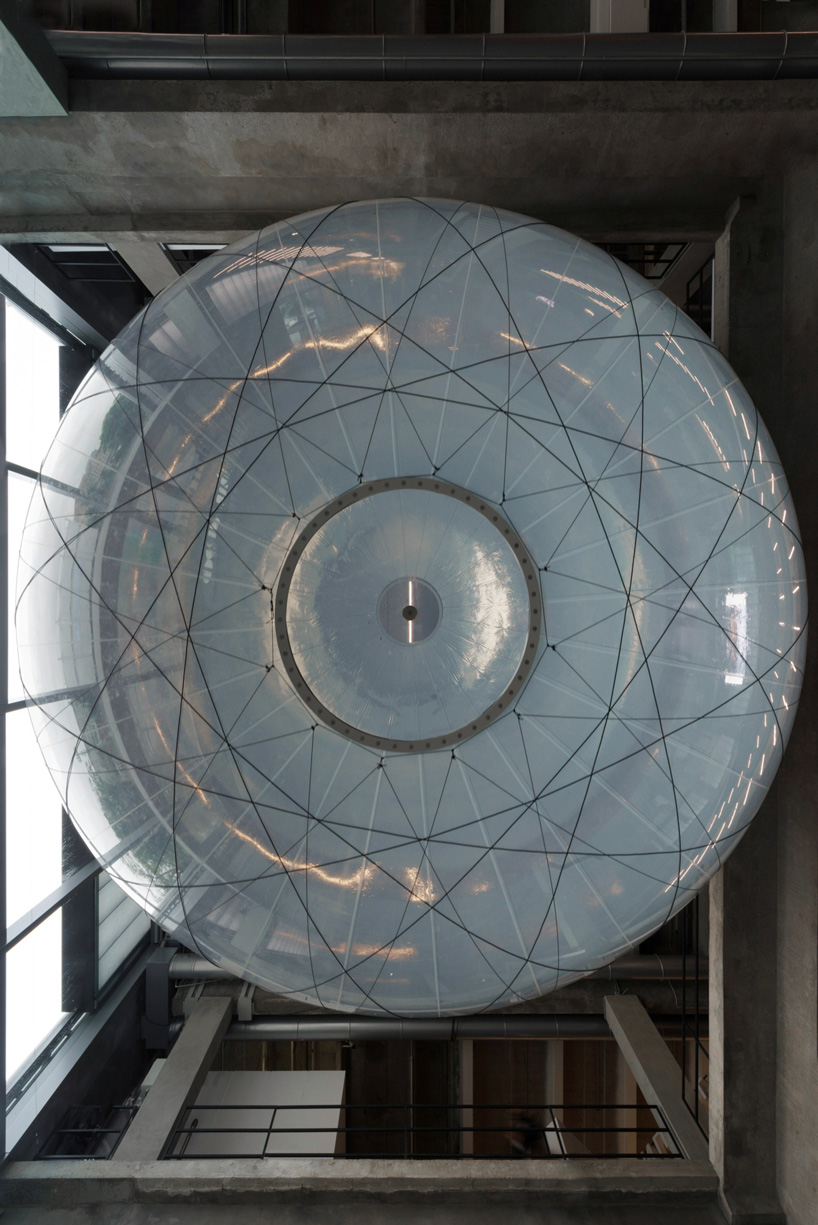 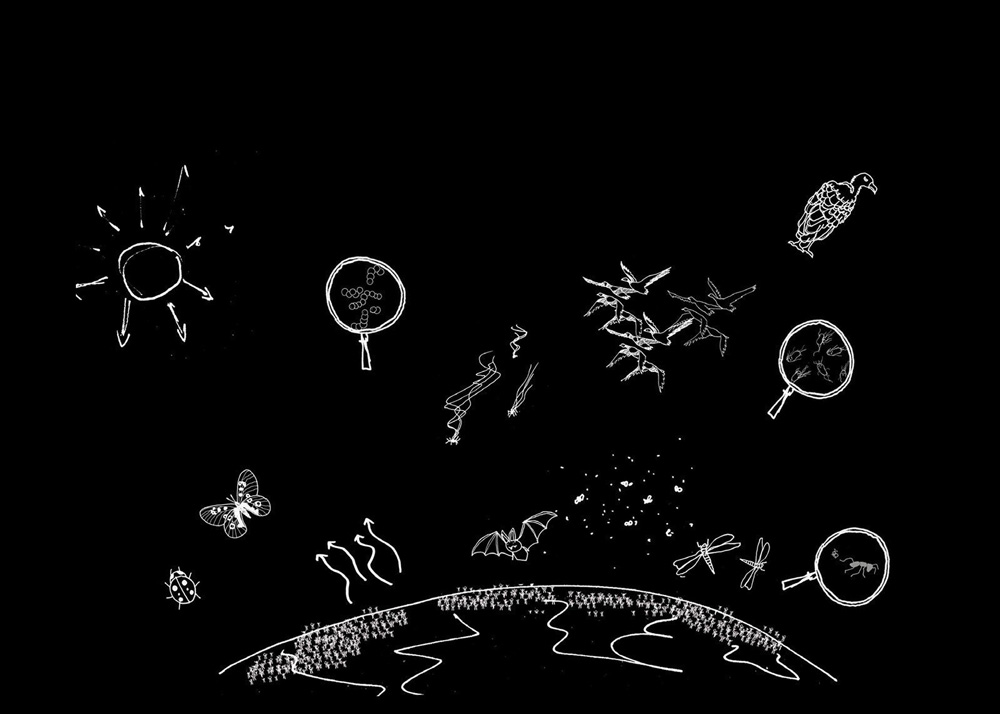 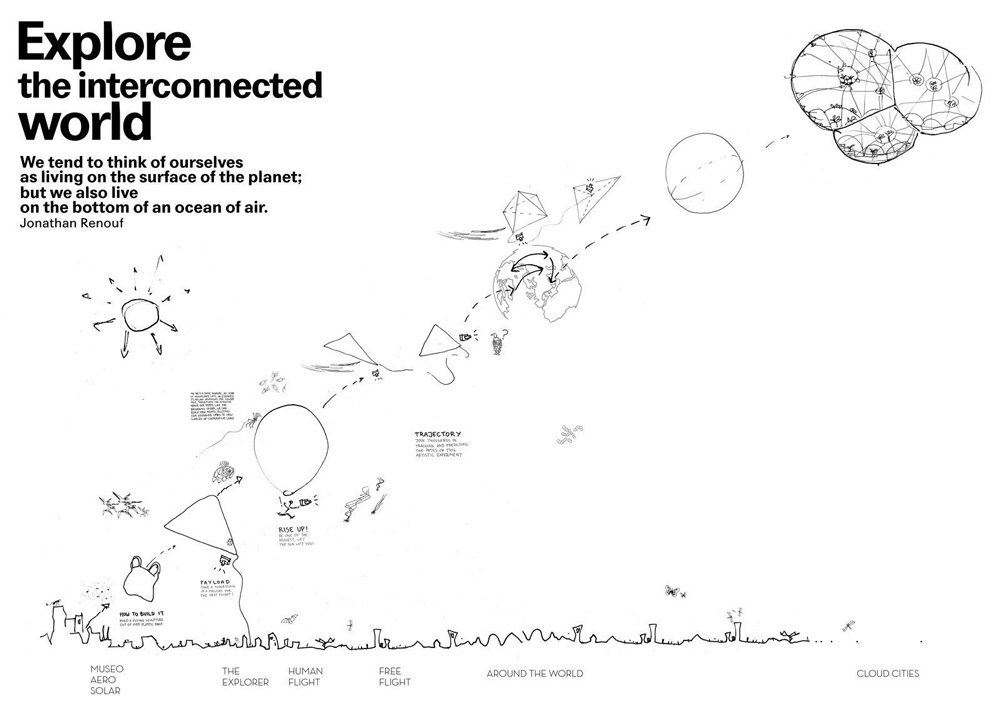 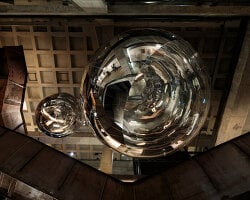 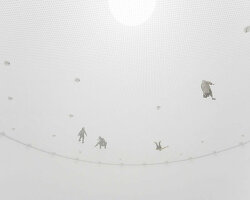