whether sculpted from sugar, photographed in a booth, or projected on urban façades, 2015 saw a number of international artists using animals as a theme for their creative work. projects like the leather wunderkammer of biological curiosities by zim & zou for hermès, and street artist hua tunan’s chaotic yet controlled painted tiger embody the range of techniques and mediums creatives use to interpret the natural world through art. take a look below at 10 of designboom’s most popular art projects featuring animals in 2015. 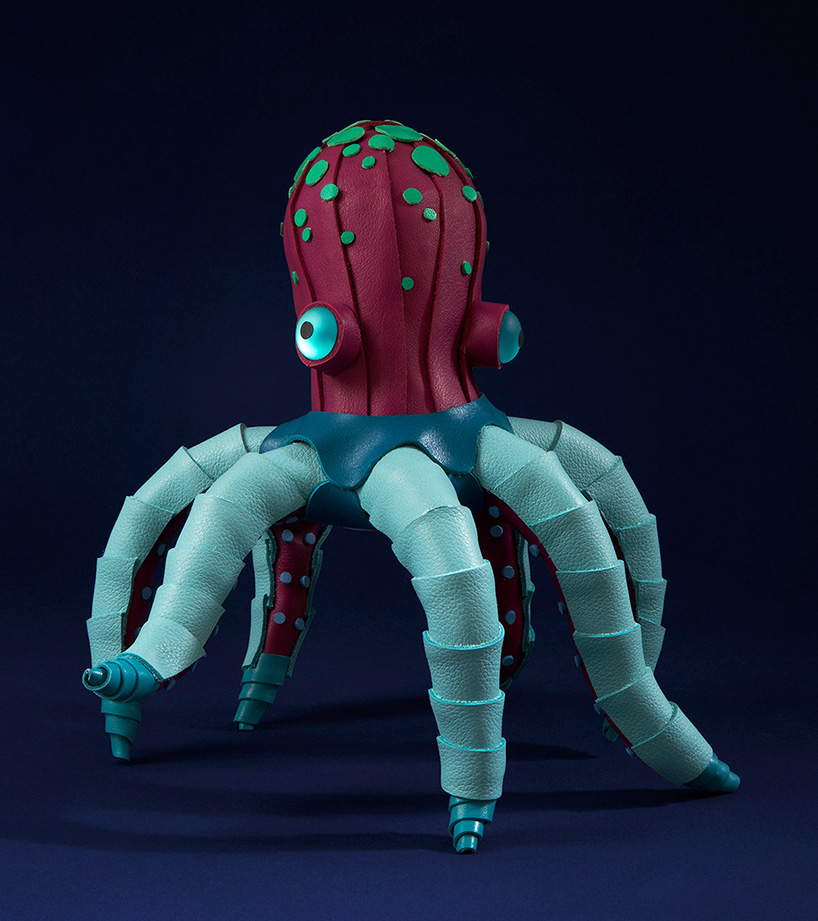 zim & zou have referenced the inherent magic in museums of natural history for their storefront installation at hermès maison in shanghai. biological curiosities from large birds and butterflies to fish and insects have been intricately crafted from hundreds of paper and leather pieces, soured using offcuts from hermès workshops in paris. layer-upon-layer of meticulously cut feathers, fins and tiny feet form an eclectic array of vibrantly-colored sculptural critters like peacocks, owls, caterpillars and crabs. thematically, the scenes are influenced by nature — the two main windows relate to air and water, while the two smaller ones about earth. infilling both displays, the creatures form a wunderkammer of interesting and artistic characters, where passers-by can suddenly experience a walk through the corridors of a mysterious museum, straight from the street. the smithsonian american art museum‘s renwick gallery reopened to the public this november with ‘wonder’, an exhibition which has seen the complete transformation the entire museum into an immersive artwork. one of the featured artists is wisconsin-based jennifer angus. upon entering her installation for, visitors encounter a hot pink-painted room, seemingly a wallpapered domestic space from the victorian era. in fact, the textured wall pattern is entirely made up of insects. collected from southeast asia, 5,000 bugs showcasing their natural, unaltered colors cover nearly every inch of one of the renwick’s galleries, wrapping the interior in iridescent greens, vivid blues, and pearly mauves. ‘in the midnight garden’ sees the careful placement of these shimmering winged and walking species into spiraling designs, ornamental motifs and starry-eyed skulls. the immense potentially reshaping the perspective of these creepy crawly creatures. combining traditional, asian-influenced motifs and contemporary public art practices, chinese graffiti artist hua tunan has painted the image of a roaring tiger with gold, black and white pigment. rendered on a towering canvass wall, tunan has formed the monumental image by spraying, throwing and catapulting different hues onto the solid surface, where the layered textures become an integral part of the final result. the performance-like personality of the painting process, characteristic of the artist’s overall approach, lends itself to a chaotic yet controlled composition where the animal image is formed by the fusion of various textural qualities. from sketch book to pen to paint brush, the work takes shape over the course of multiple trials and techniques, finally forming the dynamic image of the dangerously-realistic wild creature. 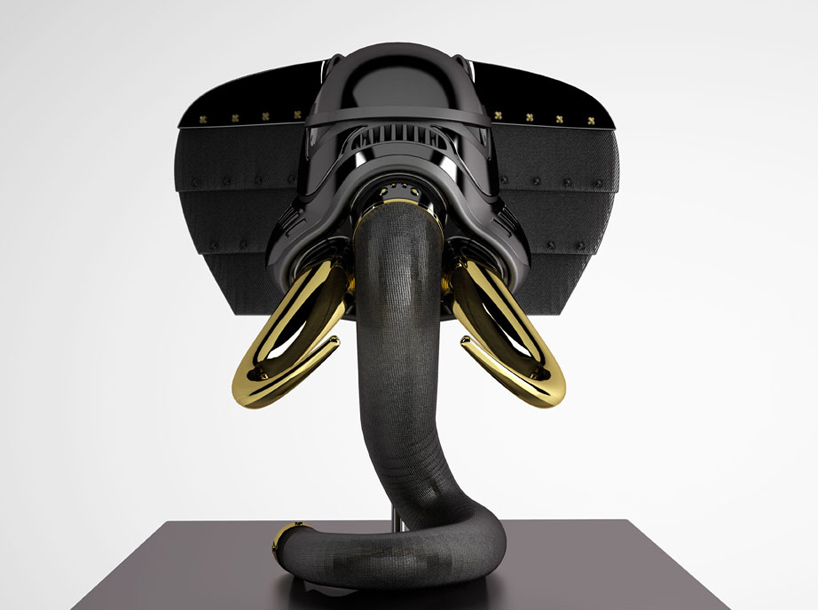 new york-based designer blank william has reinterpreted the familiar features of star wars stormtroopers as a series of wild animal armor. three species — a rhino, hippopotamus and elephant — have each been sculpted with the same aesthetic qualities as the fictional film soldiers, characterized by glossy surfaces and gilded gold details. ‘the new order’ collection has been realized in two versions, white and black, each which see animals’ facial features warp and distort to suit the style of stormtroopers’ distinctive plastoid body armor. for the ‘black’ set, elephant tusks, the rhino horn and hippo ears are wrapped in a glistening golden hue; in the ‘white’ series, these same parts are coated in a cool chrome finish. 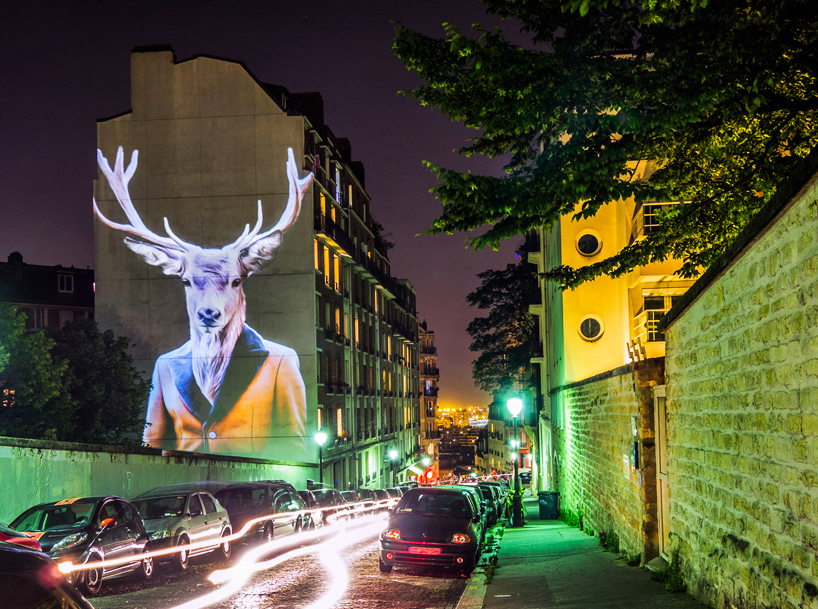 since the start of september, passersby paris’ picturesque buildings and boutiques have encountered a spell of ephemeral graffiti projected onto the architectural landscape. artist julien nonnon has scattered an ‘urban safari’ around the french capital, illuminating images of smartly-dressed wildlife on the city’s structures and surfaces at night. the series of short-lived souvenirs include ‘hip’ animals donning unusual outfits, like a cheetah clothed in a bomber jacket and an eagle sporting a suit and tie. each of the figures are named after the streets they newly inhabit, including the flannel-wearing ‘lemur of montmartre’ and smoking ‘shepherd of clignancourt’. 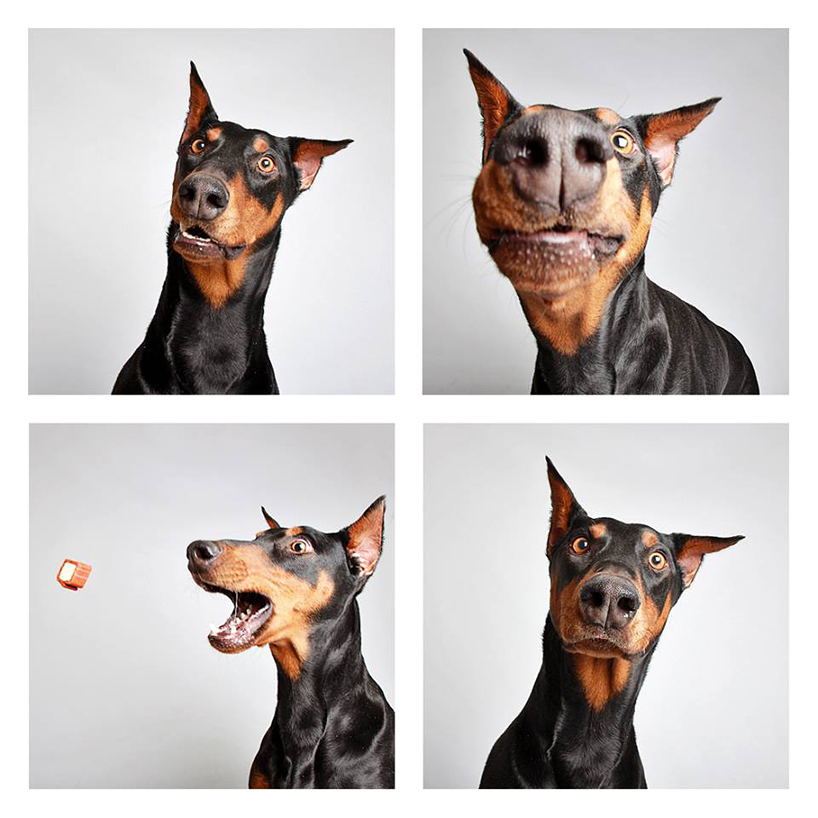 image courtesy of the humane society of utah

the humane society of utah recently enlisted photographer guinnevere shuster to come up with a creative and playful way to show the unique personalities of their adoptable dogs. in order to most closely capture the quirky character of each breed, shuster snapped photo booth portraits of each pooch in various positions and poses — blankly staring at the camera, shyly looking to the side or mid-bite. the square format photos of each dog, featured on the facebook of the humane society of utah, is coupled with a short description and details about their age and size for potential adopters. 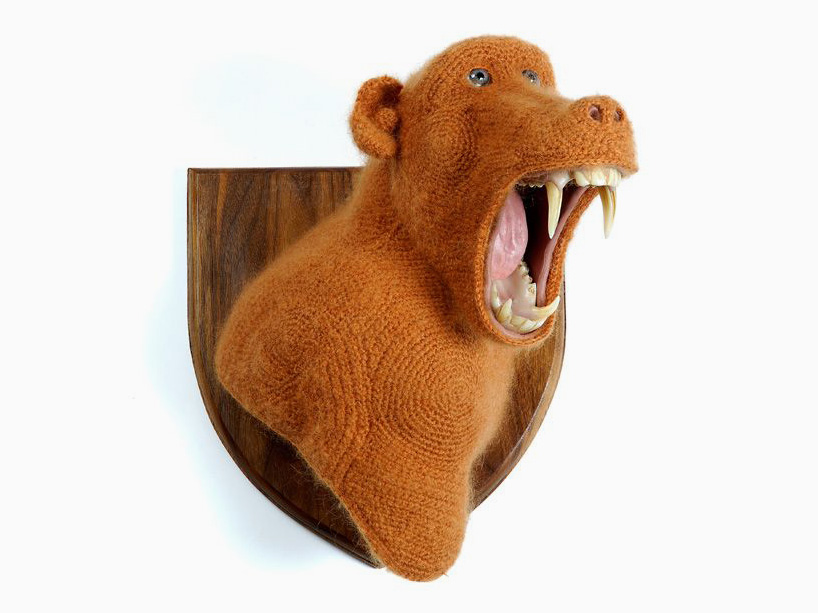 UK-based creator shauna richardson has developed a technique using crochet to sculpt realistic life-size animals she has coined ‘crochetdermy’. using materials like coarse wools, mohair mixes, glass eyes, and reproduction claws, richardson painstakingly renders the anatomical features of baboons, lionesses, hares and bears. autonomously working over a period of months, the artist clearly links the craft of taxidermy with crochet, marrying two creative methodologies and modes of preservation. ‘my work is entirely hands-on’ richardson describes. ‘I use the traditional craft of crochet in a not so traditional way and have developed my own freestyle technique which I use to respond to, and highlight, the anatomy of each piece asIi go along. no two pieces are ever the same. it is meticulous work, typically using mohair yarn and a 3mm hook.’ 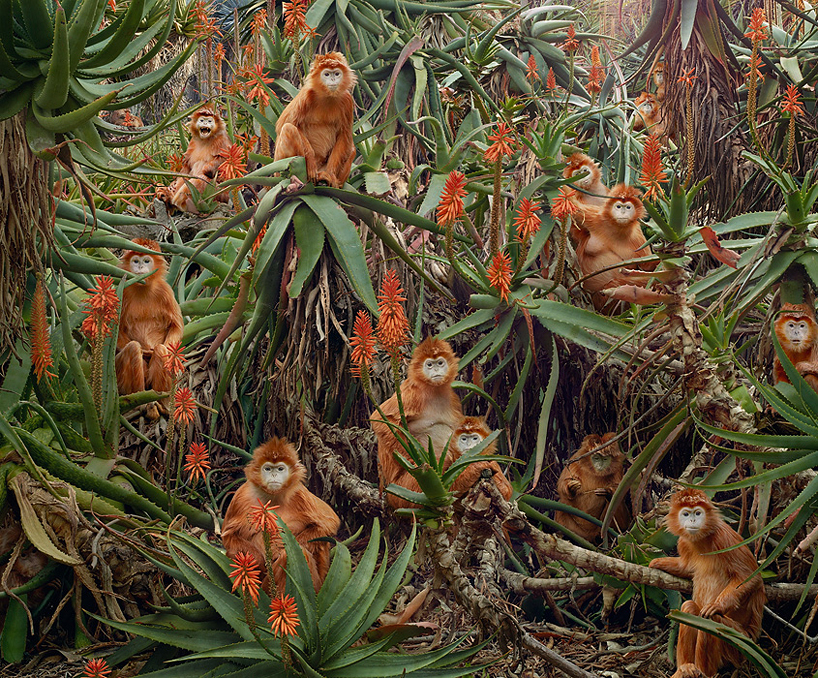 through the careful digital manipulation of photographs taken from geographical locations across the globe, simen johan constructs an otherworldly animal kingdom. his ongoing series ‘until the kingdom comes’, depicts the natural world as something familiar, yet undeniably surreal. while many photographers shy away from the reality of using computer tools like photoshop to enhance and distort the content of their work, johan not only admits it, but describes it as an essential part of his practice. ‘its rare that I see something that I want to simply photograph and not change at all’ he tells national geographic. ‘when constructing or manipulating images, I’m still limited by whatever raw material I’m able to capture on film, but I have more creative freedom to be imaginative.’ 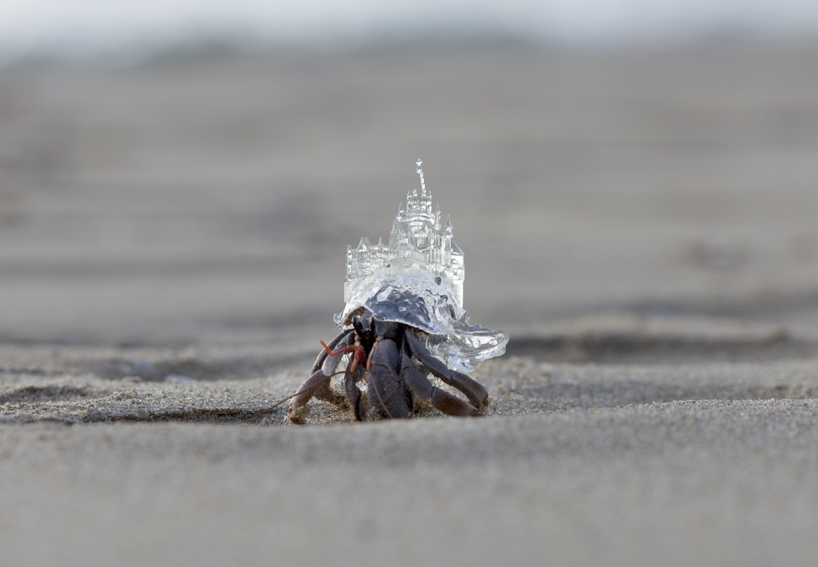 japanese artist aki inomata continues her series of 3D-printed, architecturally-influenced hermit crab habitats with ‘white chapel’ — an animal shelter formed in the shape of a japanese wedding site. these built structures, which at first glance appear to be ordinary chapels, are actually religious facilities solely meant for nuptials. although only 1％ of japanese people are christians, 60％ of weddings in japan are held in christian-style buildings. these all-white structures tend to reproduce an eclectic mix of many styles, such as gothic and romanesque — an appropriation which has probed inomata’s investigation of their origin. 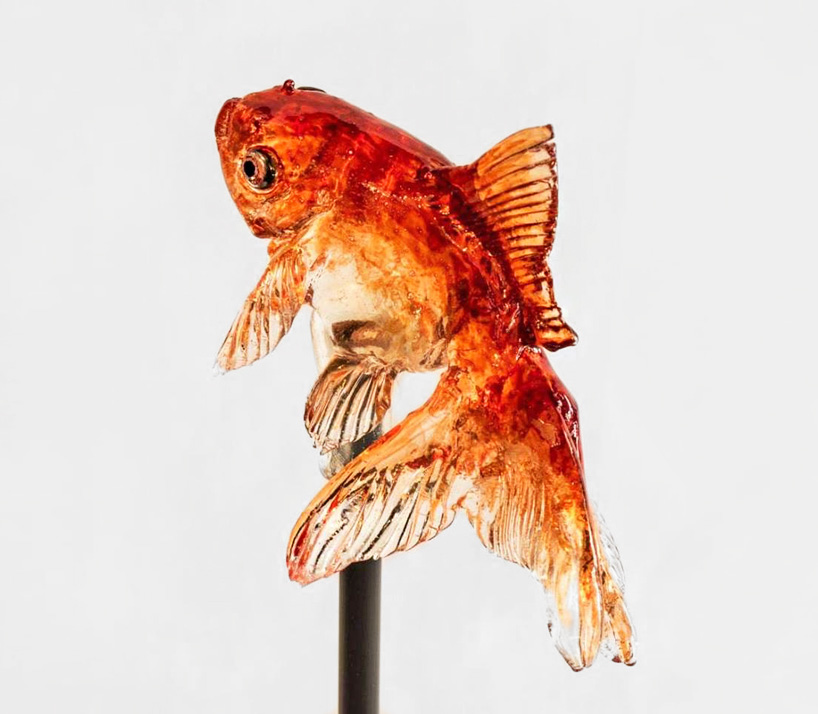 young japanese artisan shinri tezuka — one of only a handful of remaining amezaiku practitioners in japan — has completed a series of hyper-realistic sculptural edibles. amezaiku is the traditional japanese folk art of sculpting candy into a variety of shapes, using tools such as tweezers, scissors and softened candy heated to a temperature of 90°C. a sugar base is prepared beforehand, using a starchy syrup recipe that requires careful monitoring to ensure proper consistency and appearance. the mixture is then kneaded, pulled by hand, and formed into a large ball, which is then reheated to make it pliable again. the artist puts their hand into the hot mass to pinch and sculpt the necessary material, then quickly rolls and mounts it on a stick. finally, the mass is then pulled, twisted and clipped into form — typically an animal or insect with intricate characteristics.