the art world boomed this year, with some of the most renowned, international creatives in the field exhibiting their new works around the globe. the artworks and installations shown have each immersed audiences in an impactful and significant experiential context — monumental in scale, discipline, and material. from olafur eliasson’s expansive and multi-faceted exhibition in paris’ gehry-designed fondation louis vuitton to the esteemed photojournalistic imagery of steve mccurry, 2014’s presentations blew us away. take a look below at designboom’s most popular articles this year about exhibitions. 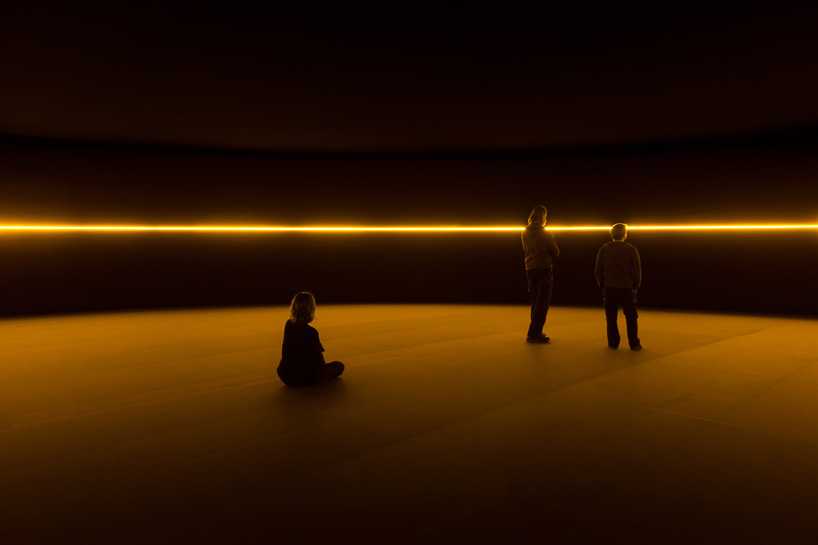 commencing the second phase of its inaugural program, paris’ gehry-designed fondation louis vuitton presents an expansive, multi-faceted exhibition that feeds the senses, by danish-icelandic artist olafur eliasson. ‘contact’ explores ‘the relations between self, space, and universe’ by creating a surreal, alternate reality within the newly-built museum. a series of site-specific installations immerse visitors in an interplay between moving light and shadow, a chiaroscuro which seemingly transports the audience into the complete darkness of outer space. various smaller optical devices distributed throughout the exhibition along with specially-built passageways build upon eliasson’s on-going study of human perception and the construction of space. ‘my exhibition addresses that which lies at the edge of our senses and knowledge, of our imagination and our expectations’ eliasson explains. ‘it is about the horizon that divides, for each of us, the known from the unknown.’ 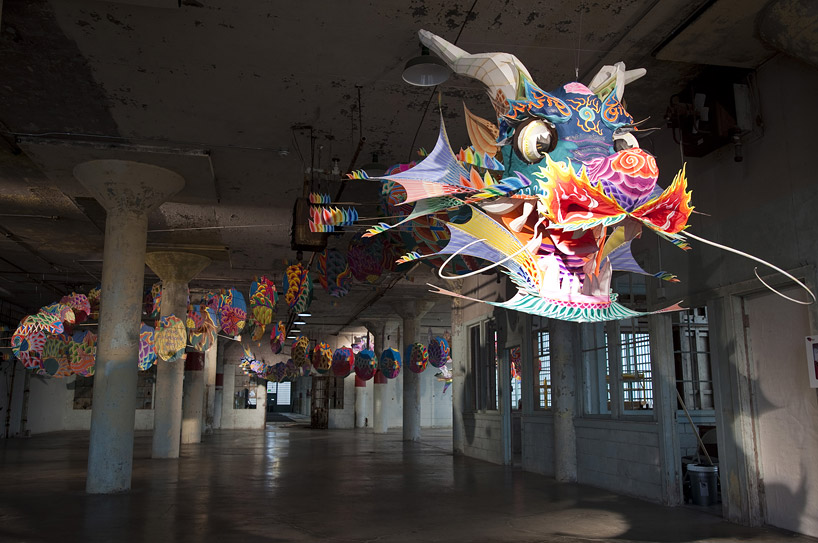 seven sculpture, sound, and mixed-media works by chinese artist ai weiwei infill alcatraz island for his exhibition ‘@large’ as an investigation of human rights and freedom of expression in the context of the historic space. the site-specific installations are installed across four locations within the building, drawing reference from the island’s multifaceted history as a 19th-century military fortress, notorious federal prison, important ground of native american history, and now one of america’s most visited national parks. each piece aims to raise questions about the social implications of incarceration and the definitions of justice, individual rights, and personal responsibility. ‘the misconception of totalitarianism is that freedom can be imprisoned’ ai weiwei explains ‘this is not the case. when you constrain freedom, freedom will take flight and land on a windowsill.’ 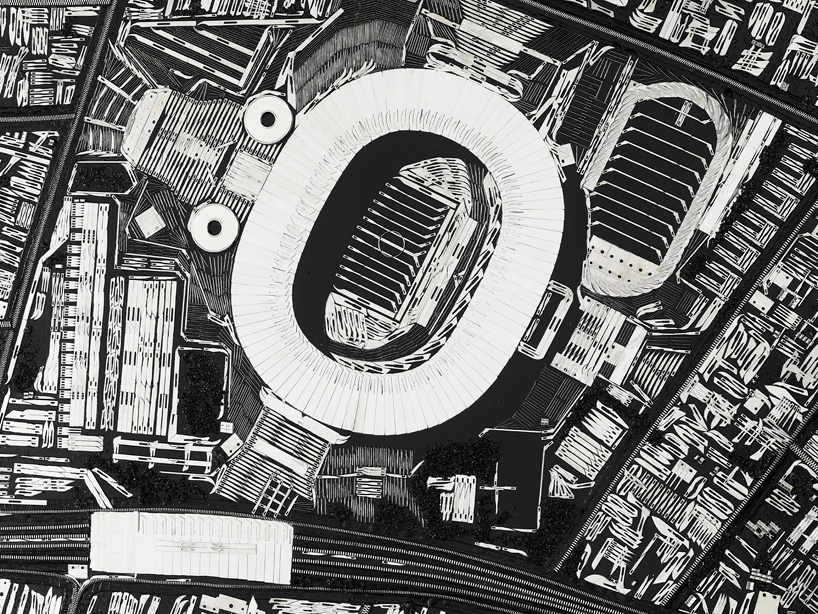 renowned british artist damien hirst reveals a new collection of paintings for an exhibition at white cube gallery in são paolo. the ‘black scalpel cityscapes’ — described by the artist as ‘portraits of living cities’ — are comprised of surgical instruments, arranged in compositions of a bird’s-eye map view of urbanized sites. both the built world and natural elements are depicted with scalpels, razor blades, hooks, iron filings and safety-pins, and set against black backgrounds. the 17 cities included in the exhibition are either sites of recent conflict, places relating to the artist’s own life, or epicenters of economic, political or religious significance — washington D.C. ; rome and the vatican city; leeds (where hirst grew up); beijing; moscow; new york; and london. 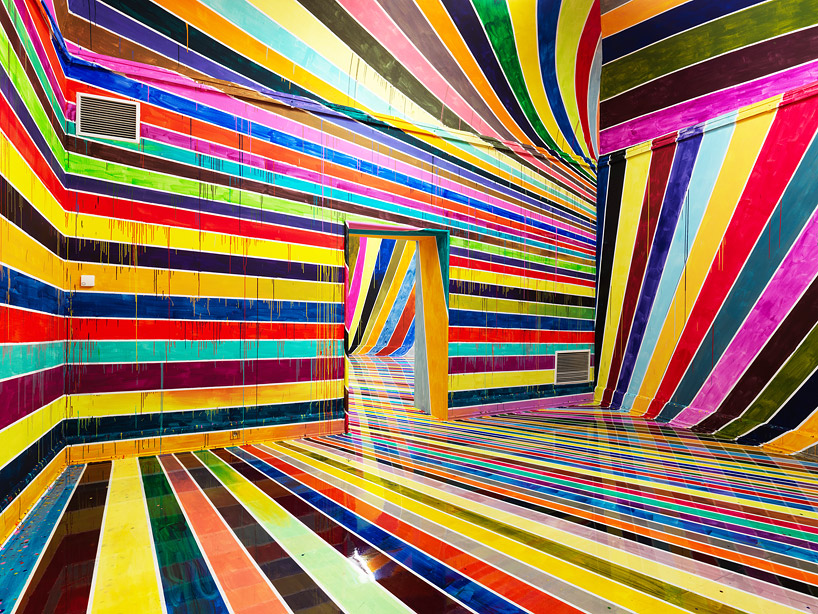 uniting painting with architecture, new york based artist markus linnenbrink has transformed two exhibition spaces at the kunsthalle, nürnberg into a walk-all-over canvas. the floors, walls and ceiling of the german site have been pigmented with vibrantly-hued parallel streaks, traversing through the gallery’s rooms. the specific arrangement of the tones and their linear movement sees the line between two-dimensionality dissolve, simultaneously suggesting the idea of an endlessly expanding space. this color adaptation, which linnenbrink has titled ‘wasserscheide(desireallputtogether)’, evokes a wild and psychedelic sense of mobility, with an intensity that the viewer’s eye can hardly follow. 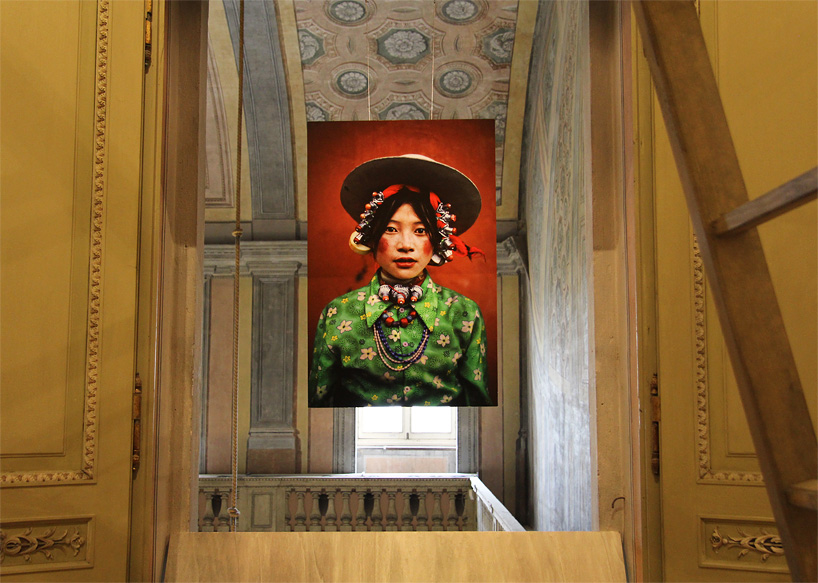 a portrait from tagong, tibet taken in 1999 is exhibited within an interior window frame at villa reale di monza
image © designboom

infilling the spacious rooms and neoclassically-decorated corridors at the exquisite villa reale di monza in italy are large-format images from american photographer steve mccurry’s more than 30 year career, comprising approximately 150 pictures from his extensive travels throughout the globe. the exhibition ‘oltre lo sguardo’ presents an expansive and rich selection of portraits and photojournalistic imagery that exemplify mccurry’s oeuvre and embody the visceral condition, cultural study and unforgettable quality for which he is widely celebrated. on the occasion, designboom was invited to preview the remarkable display of curated work, carefully arranged and hung within the apertures of windows and door frames of the former royal home. we also had the opportunity to speak with mccurry about the importance of this exhibition, his overall relationship to the subjects of his portraiture and his recommendations for future generations of young photographers.

henrique oliveira roots his largest installation to date at the MAC, sao paulo 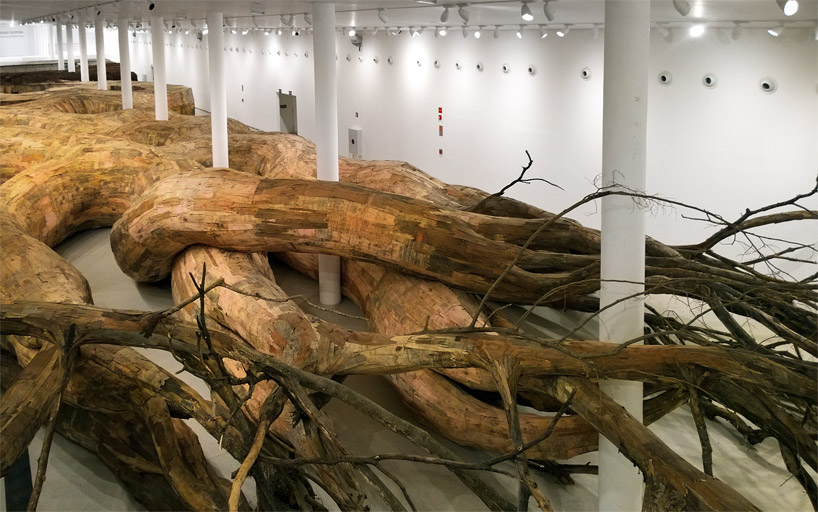 brazilian artist henrique oliveira has occupied the vast gallery expanse of the museum of contemporary art, university of são paulo with ‘transarquitetônica’, his largest immersive installation to date. using materials recycled from his home city’s urban fabric, oliveira has configured a massive series of snaking wooden columns wrapping through the interior space, which can be entered and experienced by the visitor. the various routes with multiple possibilities are designed to embrace the observer in a sculptural universe, with the smells, sounds and sights of the medium surrounding them within the form. shifting in narrative and aesthetic from front to end, the piece epic proportions begins as the knotted roots of a tree, and finishes as narrow, white-painted corridors, symbolically expressing the evolutionary transformation in architecture from the caves which served as shelter to men and women for millennia to the high-rise buildings in the sky we occupy today.

numen/for use swap staircase for an interwoven net pathway 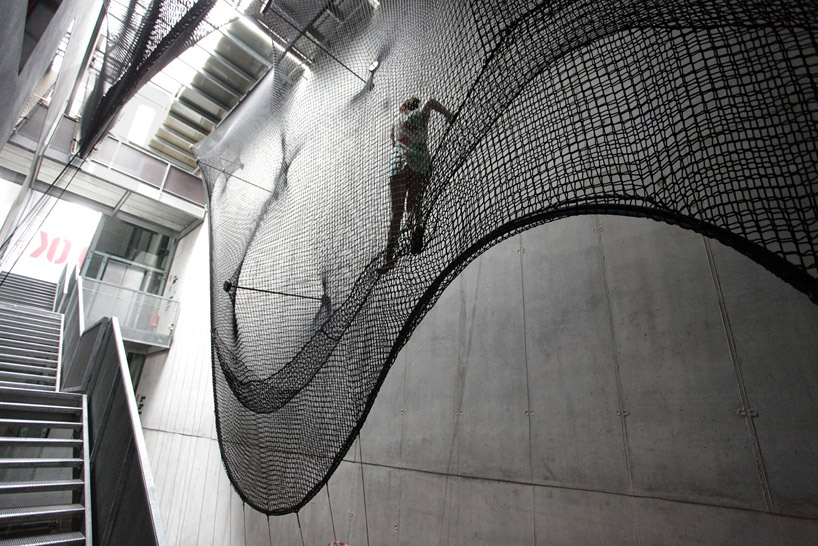 image courtesy of numen/for use

acting as supplementary staircase in the exhibition space at the OK center for contemporary art, ‘net linz’ by croatian-austrian design collective numen/for use is an inhabitable and climbable social sculpture made of intricately interwoven mesh. nets are suspended from the ceiling and stretched with the weight of sand bags attached to their base. their vertical orientation, reaching towards the height of the room, results in a canyon-like path, where the visitor must slowly swing as they meander along the steep and undulating aisle. 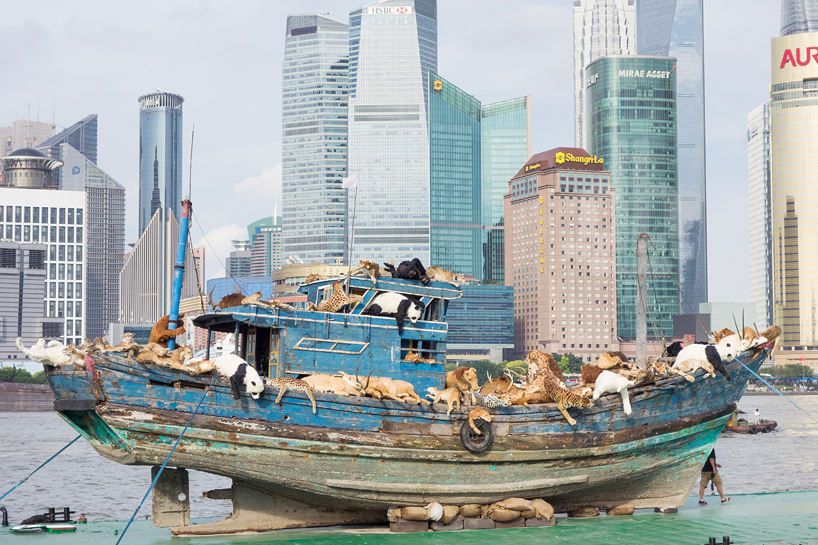 ‘the ninth wave’ sailing on the huangpu river in front of the bund, shanghai, 2014
photo by JJY photo, courtesy cai studio

as part of a monumental exhibition presented by the the power station of art in shanghai, chinese artist cai guo-­qiang has set sail to ‘the ninth wave’, a fishing boat from the artist’s hometown of quanzhou carrying 99 fabricated animals. sailing along the famous bund on the huangpu river, tigers, pandas, camels and apes cling to the worn ship, looking weather­‐beaten and sullen with their heads bowed in fatigue. the installation draws visual influence and takes its name from russian painter ivan aivazovsky’s 1850 painting, which depicts weary survivors from a shipwreck just barely holding onto to a mast, communicating human helplessness in the wake of nature’s unforgiving forces. 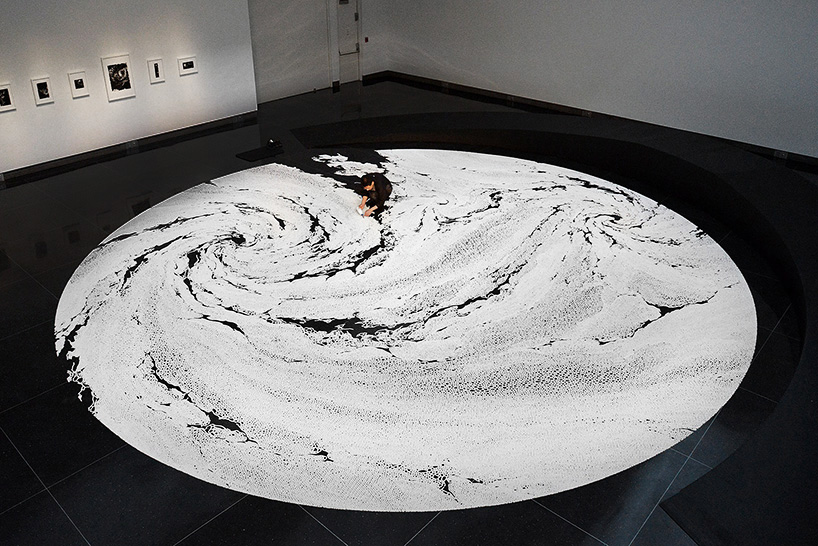 japanese artist motoi yamamoto has completed two monumental salt works in utah, encompassing the ground floors at westminster college and weber state university. using his trademark medium, yamamoto has created new iterations of his ‘floating garden’ lacework, this time bound within the confines of a circular form. filling the shape are minutely interconnected lines of matter, linked to each other within the complex labyrinth. the swirling, hurricane-like pattern is used as a symbol in east asia, representing life and death, resurrection and rebirth and the displays of vitality. ‘there is no set motif in the patterns I draw’ yamamoto explains, ‘but shapes and forms that can be found in nature such as typhoons, whirling tides, and galaxies are part of my work.’ creating such intricate netting on such a mammoth scale requires patience and practice. holding a bottle of salt in hand, the artist must sit down in a small space where no particles will be laid, simultaneously moving the container with a certain rhythm. the subtle movement creates tiny cells that mimic bubble-like patterns, each of which symbolize pieces of memories and fragments of time.

abraham poincheval lives inside a bear for two weeks 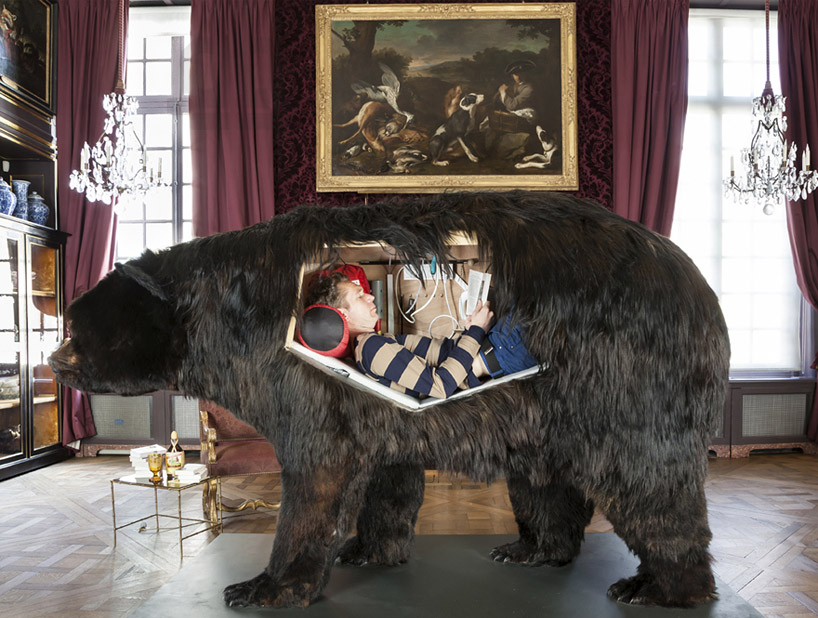 for thirteen days and thirteen nights, french artist abraham poincheval has lived inside the hollowed-out carcass of a bear, positioned in the center salon at the musée de la chasse et de la nature in paris. just like the mammal during the winter months, poincheval has remained within a small enclosure, keeping with him all the basic things he might need to survive throughout the weeks spent inside; food, water, activities and even a place to relieve himself are all contained inside the makeshift unit. by residing within the species, poincheval aimed to understand his own physical limits and experience animal nature, a symbolic image of the ‘inside out’ of a bear during hibernation.