whether painstakingly poured, digitally manipulated, or intricately sculpted, 2015 saw a number of international artists using hair, skin and limbs as a living canvases in their creative projects. these atypical mediums have been the starting points for artists such as blake little — who poured buckets of honey on subjects and photographed the results — to jyo john mullor — who digitally sculpted a series of custom-made human head helmets. take a look below at 10 of designboom’s most popular body art articles of 2015. 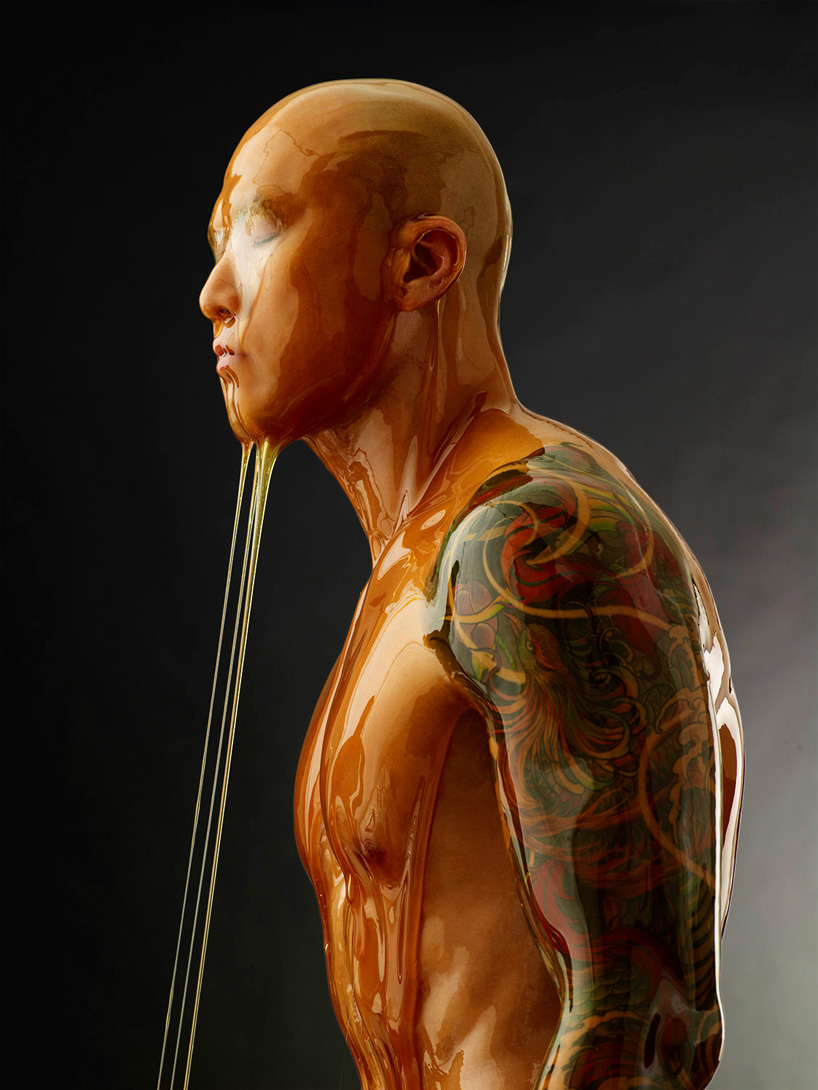 american artist blake little experimented with the human body for his ‘preservation’ series adding a ‘sweet’ sculptural quality to his photographic portfolio. little covered portrait subjects in tubs of sticky-sweet honey while being photographed in the studio. models representing a diverse range of ages, ethnicities and body types were completely canvassed in cascading sheets of golden goo, resulting in their almost amber-preserved appearance. seemingly frozen in place, the subjects evoke sensuality and drama, their positions and limbs exaggerated by the molten material hanging from them. 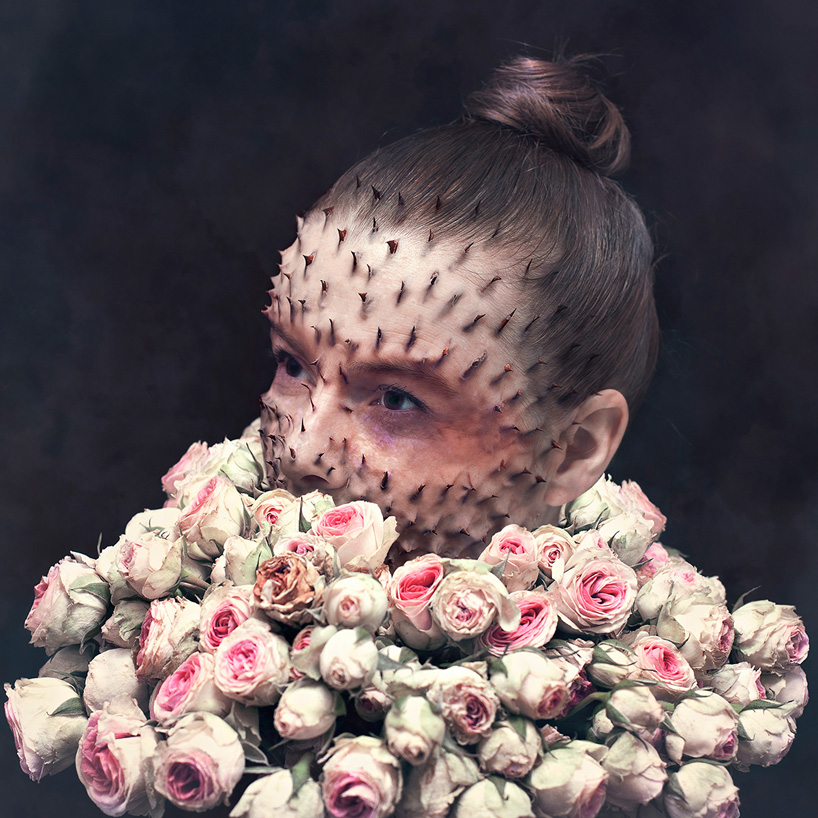 with sharpened skills in digital photography and retouching, french artist cal redback comprised a series of surreal compositions that deform and reform individuals with the natural world. a singular image titled ‘herbraiser’ features a disturbingly realistic impression of a female face growing thorns in the same way a bouquet of roses would. overall, the metamorphosis of mortal characteristics into alternate botanical life forms unite two categories of existence into one, redefining the term ‘human nature’ as a seemingly new species of hybrid creatures.

global photoshop study shows ‘perceptions of perfection’ across the world

a website offering online medical services questioned how perceptions of body images vary across the globe. superdrug onlinedoctor asked 18 female graphic designers from around the world to photoshop an unedited image of a female form by making her — in their own opinion — more conventionally attractive to other citizens of their country. the brief sparked a thought-provoking and varied selection of results, which form an interesting study of the many different paradigms of beauty. the goal of the project is to better understand potentially unrealistic standards of beauty and to see how such pressures vary around the world. 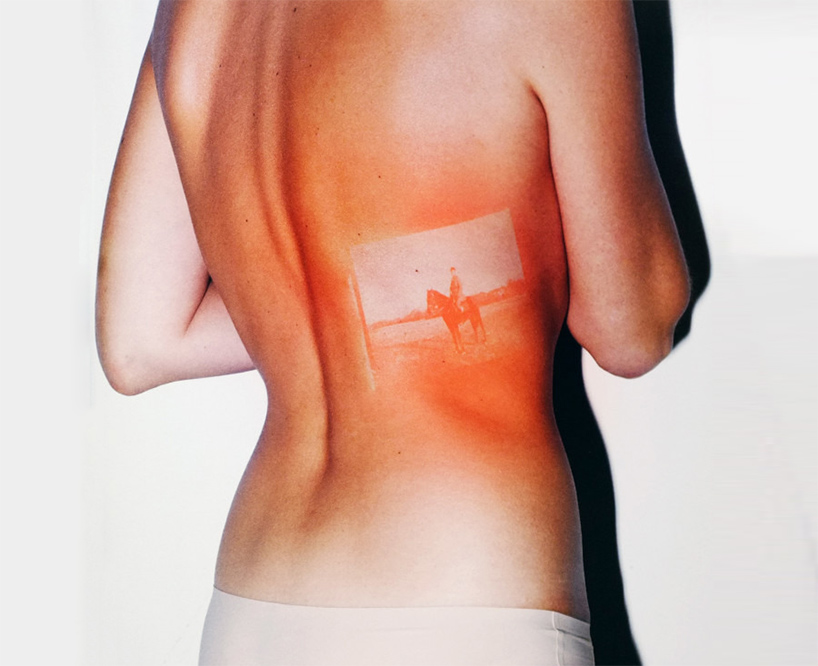 french artist thomas mailaender manifests an artistic performance in pictures, illustrating the product of his ephemeral and experimental body artworks. the images show the result of the artist’s work with UV light: mailaender applied 23 original negatives from the archive of modern conflict’s collection onto the skin of models, before projecting a powerful UV lamp over them. the result reveals a fleeting picture on the skin’s surface, which he photographed just moments before ​​exposure to daylight caused them to disappear. 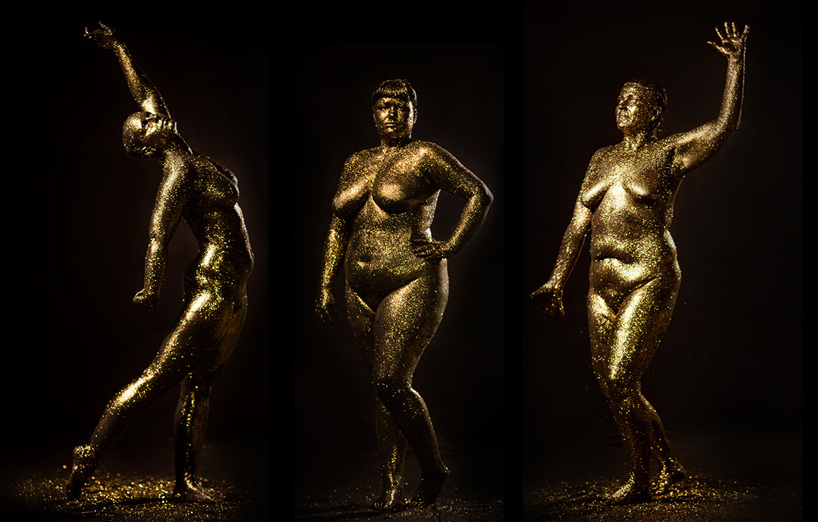 fed up of the media’s attention to and objectivation of women’s bodies, artist kitty von-sometime has realized an ongoing art film series in an effort to empower females of all descriptions. the short film entitled ‘#embraceyourself’ serves as the music video for the song ‘dim the lights’ by CREEP featuring sia. nude women encrusted in a thick layer of gold body glitter gracefully dance amongst a floor filled with wet volcanic sand, interacting with each other and the dusty substance. a backdrop of angled mirrors reflect and refract multiple images of the moving female models and their sparkling bodies, creating an ever-changing array of light and color. 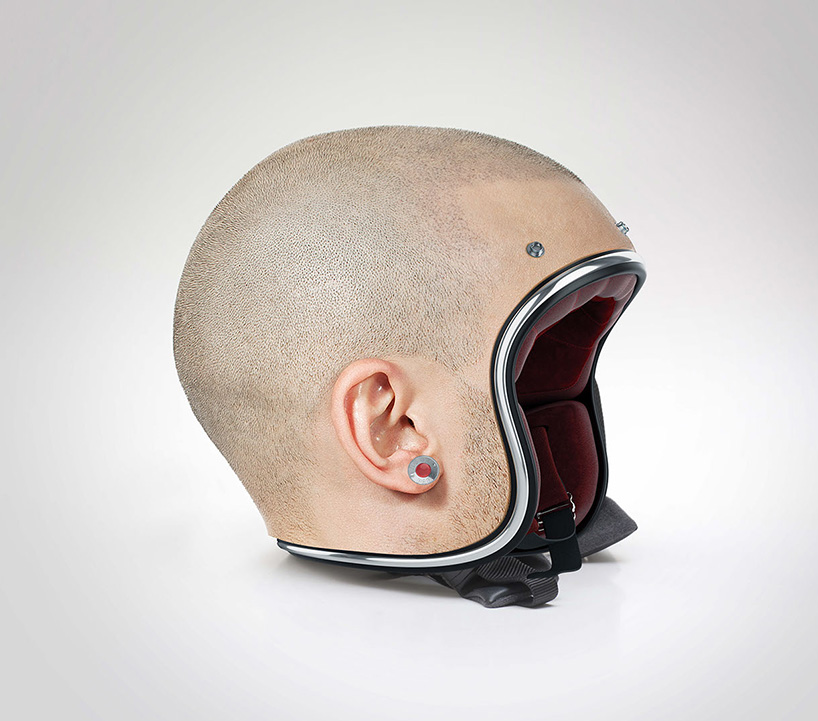 dubai-based digital designer jyo john mullor has realized a series of helmet designs that appear to leave the human head totally exposed to outdoor elements. the trompe-l’œil effect brings about the illusion that a series of different people with shaved heads are seamlessly integrated into the plush, yet sturdy protective gear. four variations include a motorcycle cap with ears and earrings, a simple bicycle style with shaved brunette hair, and a vintage safety hat with attached goggles stretching over the surface of the skin. although not yet physical objects, mullor’s ‘custom made helmets’ provide a look at the possibilities of extreme personalization, and would guarantee a double take on the road.

throughout the course of history, the standard of female beauty has significantly shifted, shaping the ways in which women look and are perceived. buzzfeedvideo compiled a short feature with a diverse cast of models, who take the viewer on a journey through the last 3,000 years of beauty. from the curvaceous bodies of the renaissance period in italy, to the boyish, 1920s figures in america, the dramatic evolution proves societies’ standards are constantly unfolding. watch the video to follow history’s course through trends following everything from full-figures to tiny feet. 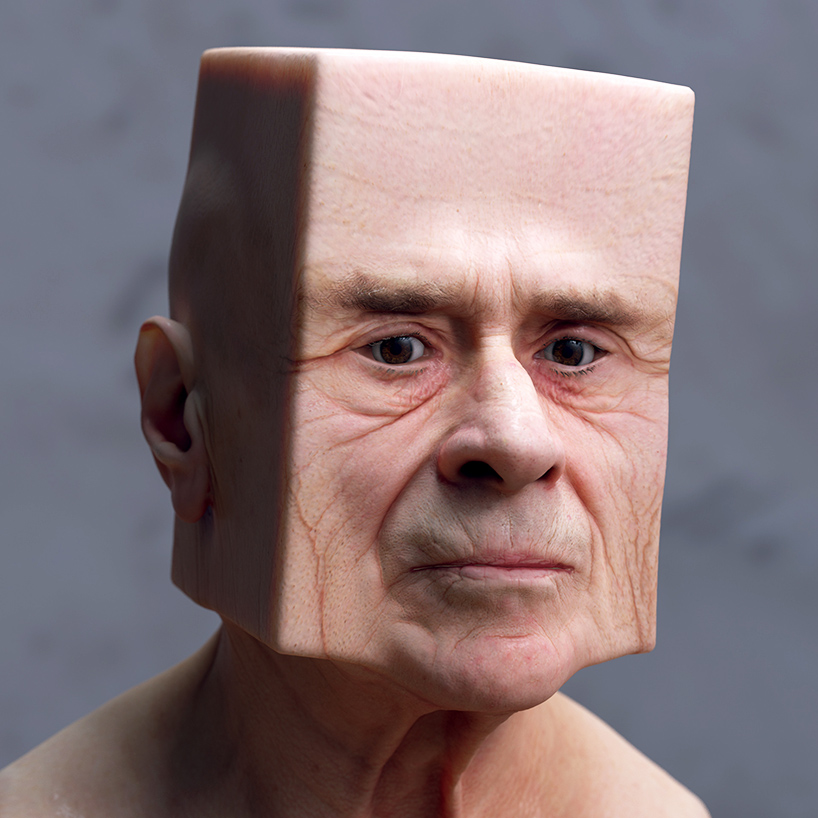 using digital tools, spanish designer lee griggs has created a series of facial ‘deformations’. the collection depicts incredibly realistic and human-like figures — eyes, noses and mouths are delineated with exact and precise dimensions, scale, shading and perspective. however, it is immediately evident that each of the virtual people, despite their graphic accuracy, are not real. their faces and heads are distorted by various geometric objects and shapes that seem to be hidden within the skin. rectangles, spheres and cylinders stretch and disfigure the images, each bearing pained, mangled and skewed expressions based on the contorted contours their faces take on. 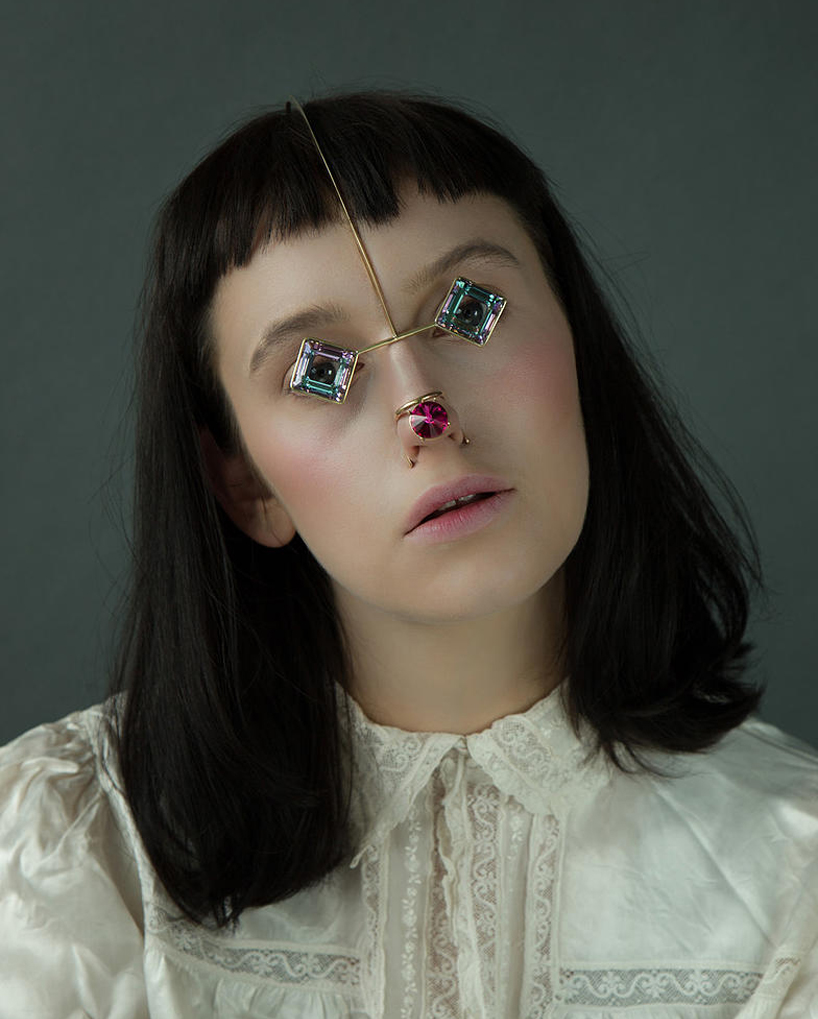 observing societal behaviors and our pursuit for beauty and physical attractiveness, akiko shinzato has delicately crafted ‘another skin’, influenced by the aesthetic and structural idea of a pair of pince-nez — a style of glasses used throughout the 19th century that simply pinched someone’s nose to stay in place, rather than using the support of arms. the collection of jewelry addresses the part of the body that is focused on during the first impression, and what people seem to care about most: the face. utilizing precious materials such as leather and crystal, in combination with soft metals, the london-based designer explores how easily one can change their appearance. 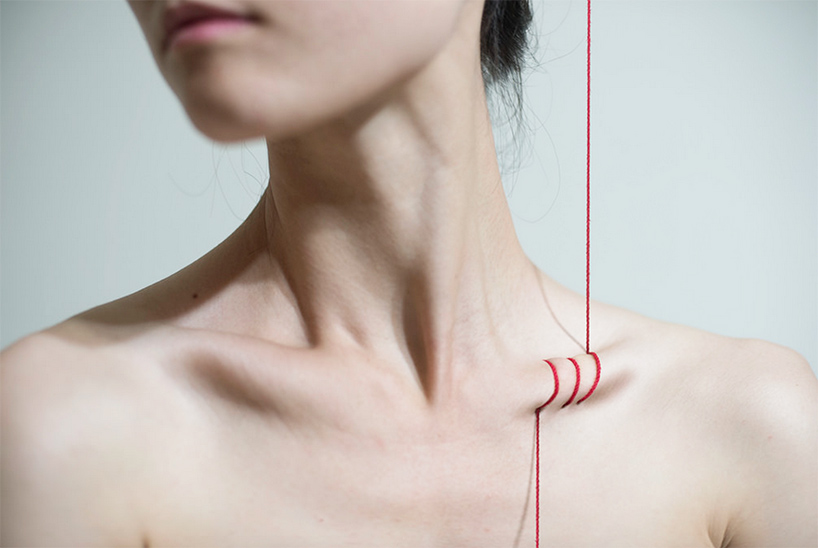 taiwanese artist yung cheng lin visualized themes of women’s issues, social standards, and body modification through a photographic lens. the artist interprets these subjects through simple tools and materials that interact with a human body to reveal a message and convey an idea. red string, push pins and roses literally intersect the female figures in the photographs, creating striking and somewhat alarming visual compositions that come to life through digital manipulation. while some images subtly reveal their context, the series as a whole seeks to reflect on societal standards and the extreme effort many women go through to modify their bodies to suit these ideals.