at the venice art biennale 2017, artist mark bradford blends mythology with america’s history of crisis within five galleries inside the united states pavilion. ‘tomorrow is another day’ is developed as a multilayered narrative, intertwining personal experience with social history. today’s world is re-imagined as ancient past, turning individual stories into mythological tales. paintings and sculpture that expand upon bradford’s experiments with material abstraction are presented alongside an existing video work that takes on new relevance in the current political climate. 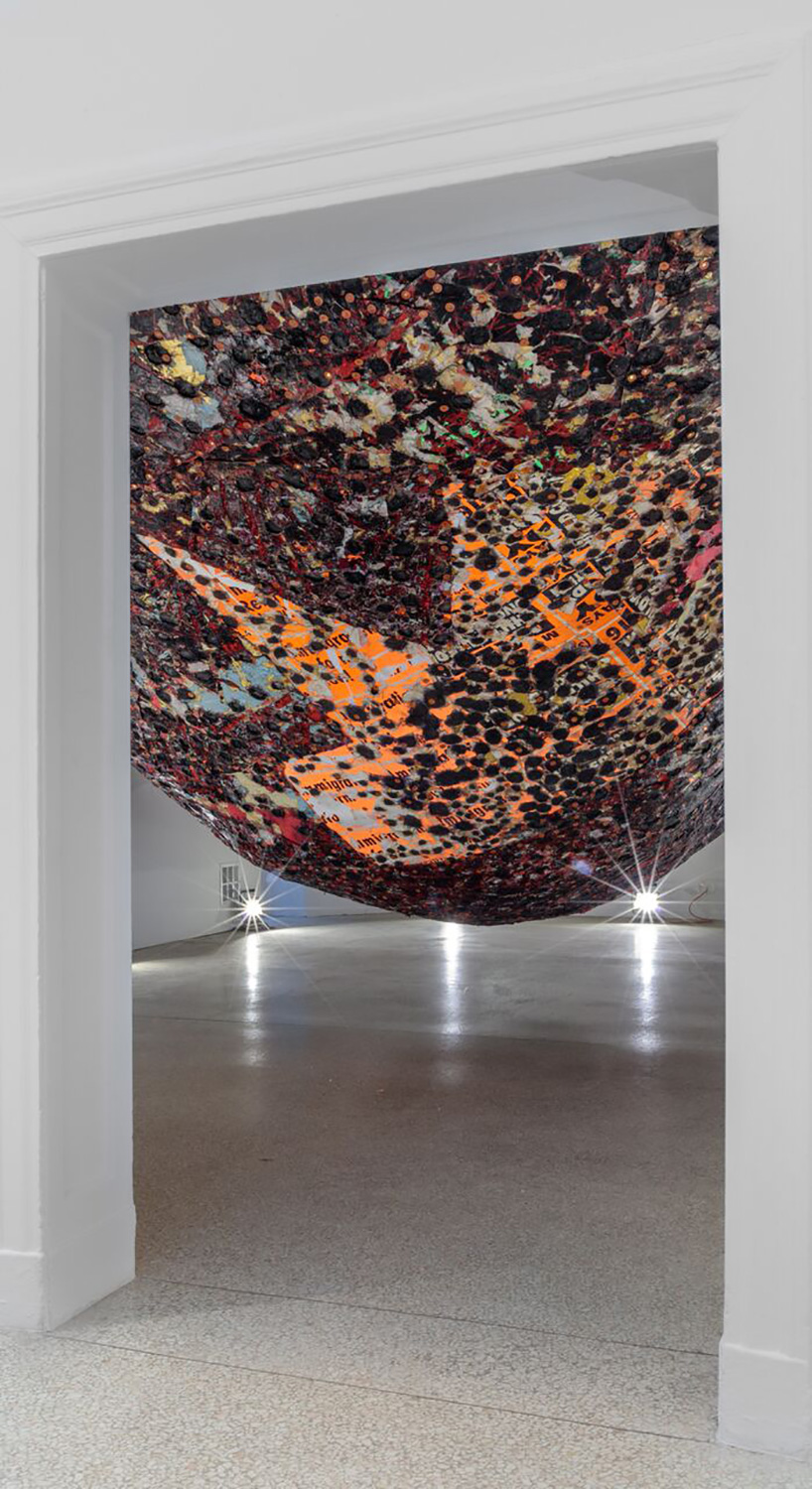 ‘tomorrow is another day is the culmination of my personal and artistic process leading up to this incredible moment of representing the united states, but it also addresses the difficulties experienced by so many others who are trying to create foundations for themselves and find their footing,’ says bradford on his exhibition for the venice art biennale. ‘the exhibition is not just about me, but about all of those who feel like they’re on the periphery.’ 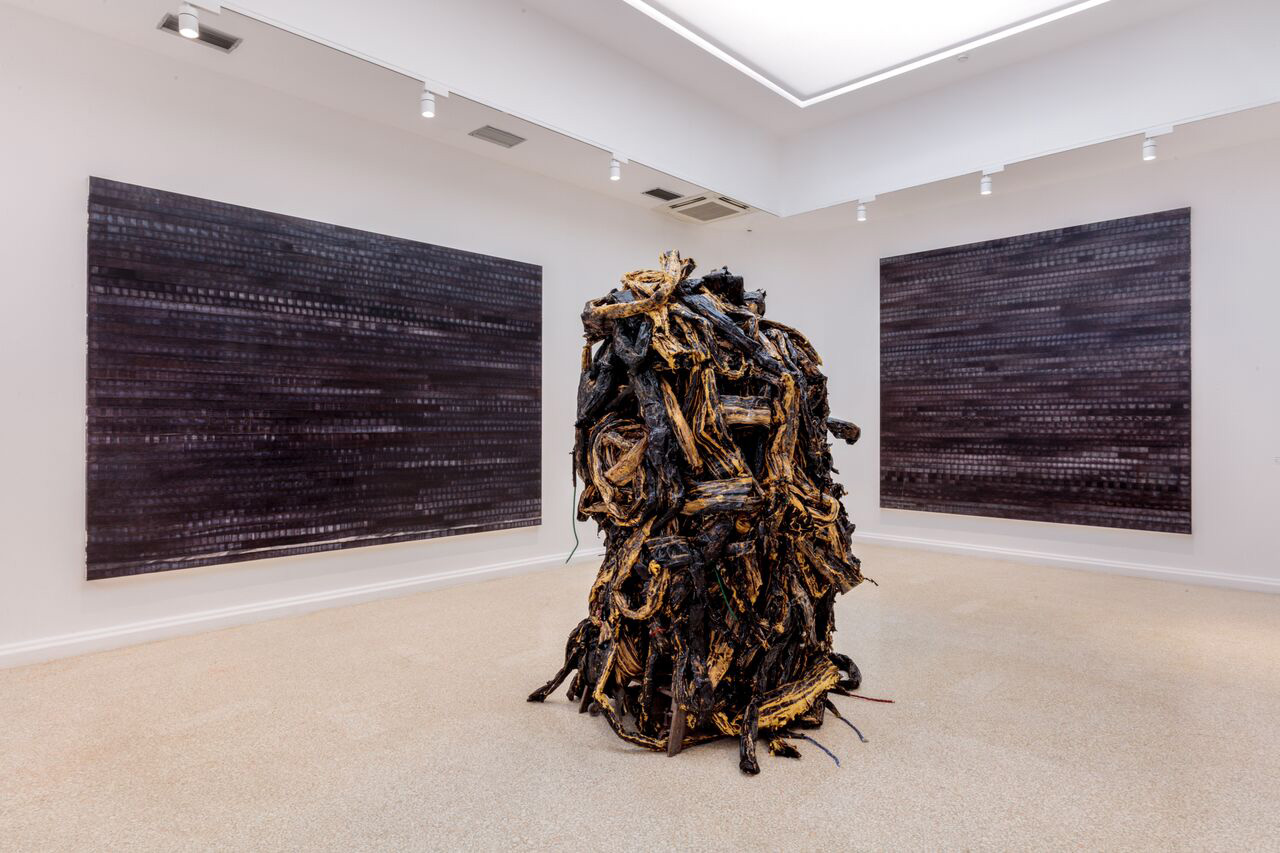 installation view of mark bradford’s ‘tomorrow is another day’

‘tomorrow is another day’ is presented by the rose art museum at brandeis university and the baltimore museum of art, and has been co-curated by christopher bedford and katy siegel. the exhibition begins on the façade of the U.S. pavilion, where two large slabs of cement board titled ‘hephaestus’ have been engraved with a poem by bradford that hints at the galleries inside. visitors enter the exhibition from the side of the building, rather than the stately, column-framed main entrance — in effect, sending them through the servants’ door.

once inside, an obstructive swollen mass with a black and red pockmarked surface looms above entrants and forces them to navigate around the outer perimeter of the room. the placement of ‘spoiled foot’ seeks to make visitors feel powerless and vulnerable within a metaphorically collapsing social power structure. the work’s title draws from the story of hephaestus, god of artists and makers, who was cast from mount olympus for being born lame. 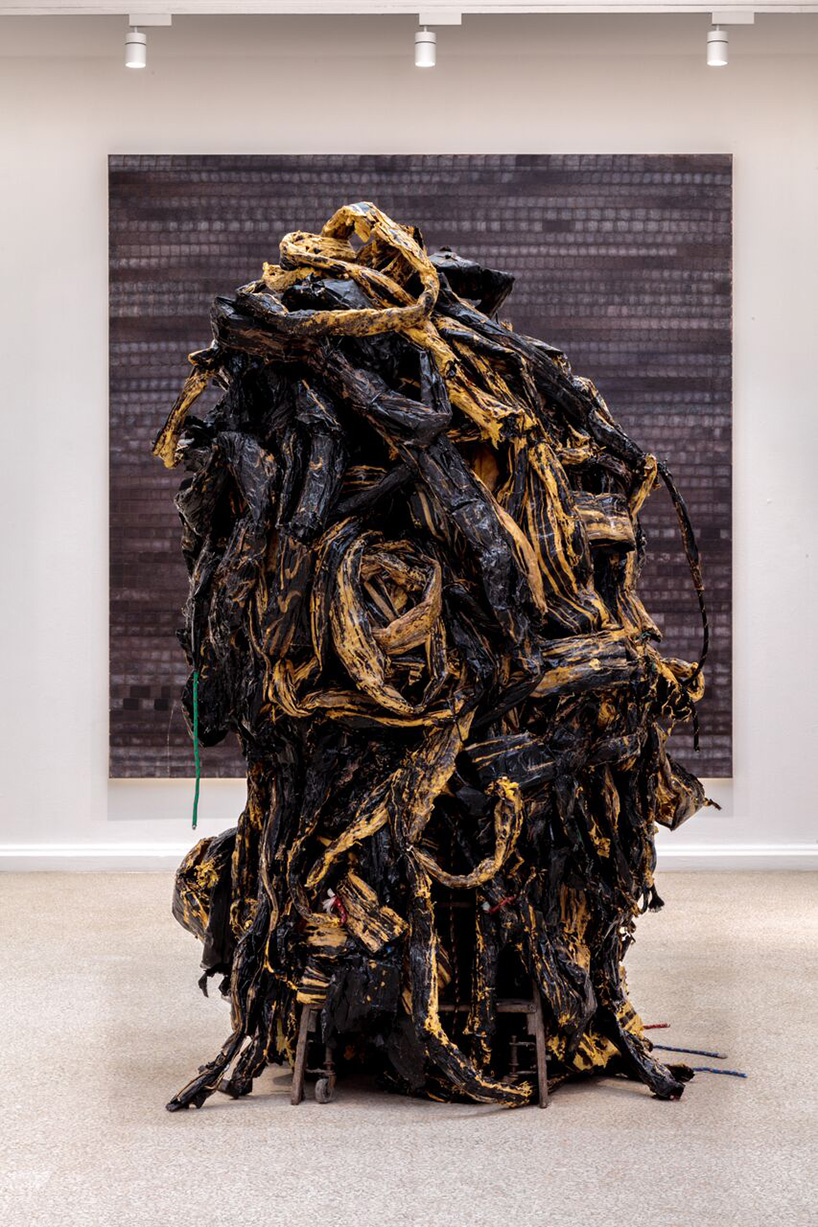 in the second room of the pavilion, bradford uses endpapers — the sheets at the beginning or end of a book — to carry broader themes of labor, socioeconomics, and politics. soaking the sheets in large basins, and incorporating them into shimmering black-purple paintings, bradford alludes to the mythological sirens, which represent the allure, the abuse, and the rage of women. these paintings surround a new sculpture titled ‘medusa’, which emerges as a tangle of bleached black paper locks. 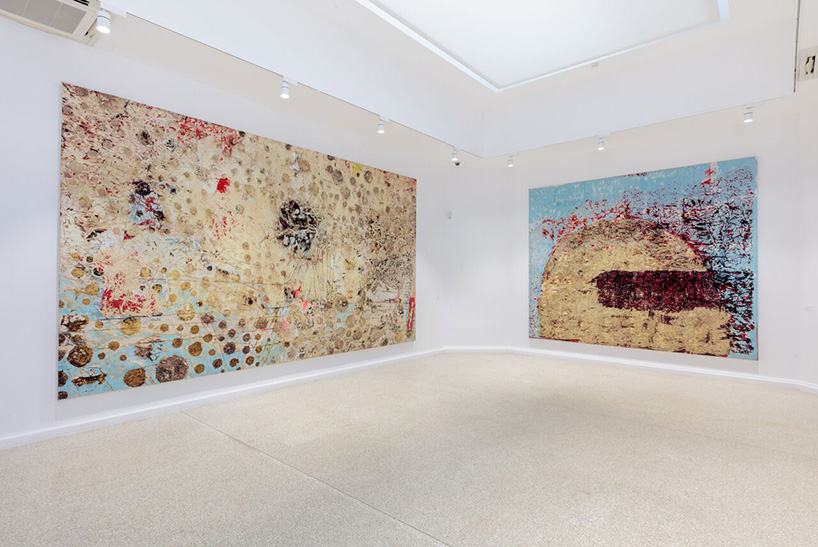 installation view of the US pavilion at the venice art biennale

in the rotunda of the pavilion, bradford has created ‘oracle’ using skeins of bleached and black paper. bradford’s site-specific work hovers between a cave and an altar, transforming the architecture of the interior into an ancient grotto where oracles would deliver truth and predictions. as visitors enter the fourth room, a collection of monumental canvases explore the relationship between intimate biology and the grand cosmic perspective. formed of bleached paper — which the artist soaked and molded by hand — the paintings suggest both the building blocks of life and heavenly bodies.

concluding the progression through the pavilion, a video work titled ‘niagara’ depicts the artist’s former neighbor, melvin, walking away from the camera — just as marilyn monroe did in the 1953 film of the same name. viewers are intended to feel an abstracted, invisible violence that threatens retribution for melvin’s self and sexuality. 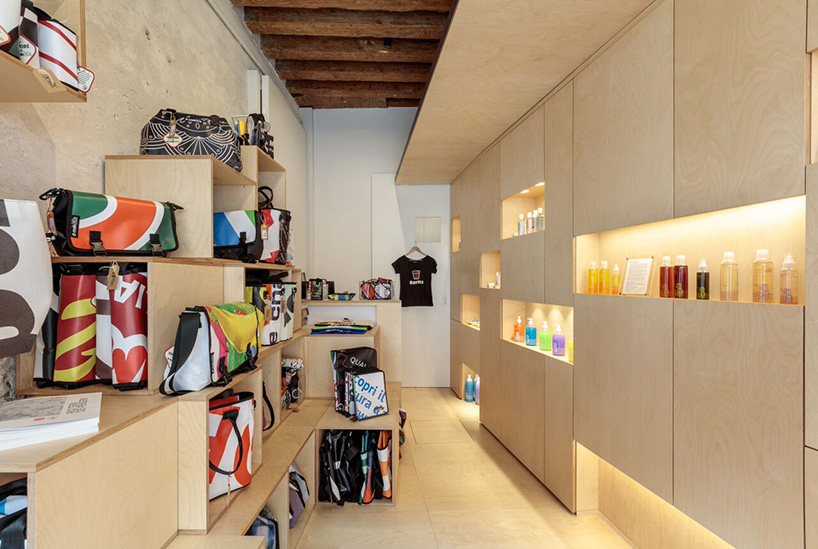 in conjunction with the exhibition, bradford presents ‘process collettivo’ — a six-year collaboration with venice nonprofit social cooperative rio terà dei pensieri. the program provides employment opportunities to men and women incarcerated in venice who create artisanal goods and supports their re-integration into society. a storefront in venice is the initial manifestation of the collaboration, and is open to the public in conjunction with la biennale di venezia. 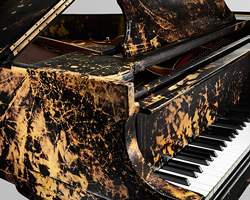