for the swiss pavilion at the venice biennale in 2013, valentin carron does not succumb to the temptations of spectacle, opting for an elegant discourse on the definition of sculpture. thanks to sudden shifts of register and the variety of the works on display, the artist manages to convey a sense of the complexity of sculpture, without any over-simplification. curator giovanni carmine, director of the kunsthalle in sankt gallen decided to showcase  valentin carron’s work against the modernist architecture of the swiss pavilion, designed in 1952 by bruno giacometti. entering the exhibition visitors come face to face with an 80-metre-long two-headed, cast-iron snake. while one head looks out over the top of the exterior wall of the pavilion, the other guards the main door. both are joined by a long thin body that winds its way through the building and courtyard accompanying the visitor to carron’s paintings and sculptures. the metal snake neatly sums up valentin carron’s artistic approach: the journey is more important than the final destination. the series of flattened musical instruments is made of a copper and zinc alloy, then trampled on, crushed and finally cast in bronze. the technique comes from the french neorealism movement, but the destructive gesture is a new one. the instruments are exhibited inside and outside the pavilion, sometimes camouflaged against the walls. 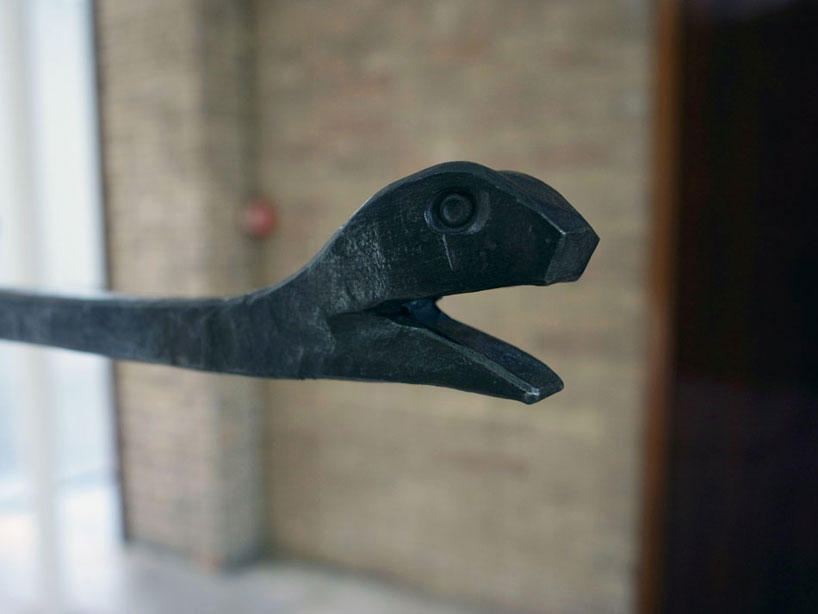 ‘you they they I you’ is a 240-foot-long, two-headed snakeimage © designboom

the sinuous bends of the serpent in the exhibition rooms is evoking the relationship between work and viewer, author and space. once again this is a case of copying, since it is a reinterpretation of a grille covering a window on a building from the early 20th century in zurich, which contains a police station. carron thus upsets hierarchies, making a decorative detail into an autonomous sculpture that impacts space, occupying it with its presence. in this sense the artist also conquers fear, an emotion habitually associated with snakes, but without depriving us of the infinite possible associations generated by a universal symbol like this one. from aby warburg to the biblical notion of evil, the formal minimalism of the work conflicts with the wealth of reminders evoked by the serpent. 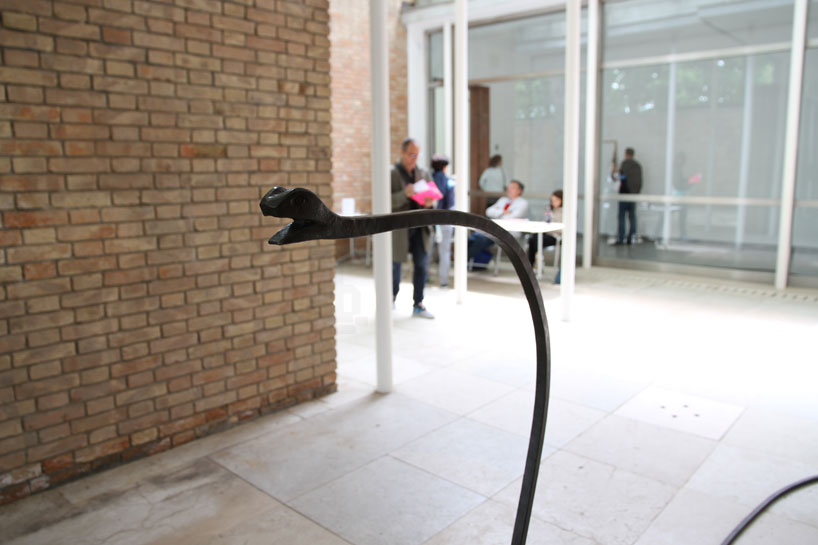 the idea for the snake comes from a detail found on a window on a zurich fire station building. its minimalist shape respects the pavilion’s art nouveau styleimage © designboom 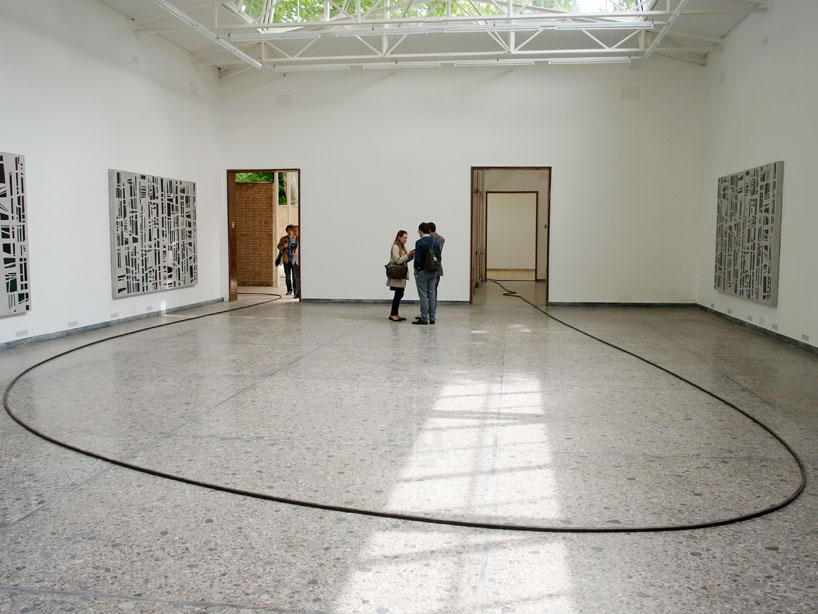 the surfaces of the resin paintings resemble cement and resemble the raw materials used to build the swiss pavilion. coloured ‘windows’ drawn on the surfaces mimic the glass windows on the facade of the royal academy of fine arts in brussels. each painting is different and pays tribute to modernist abstract work. 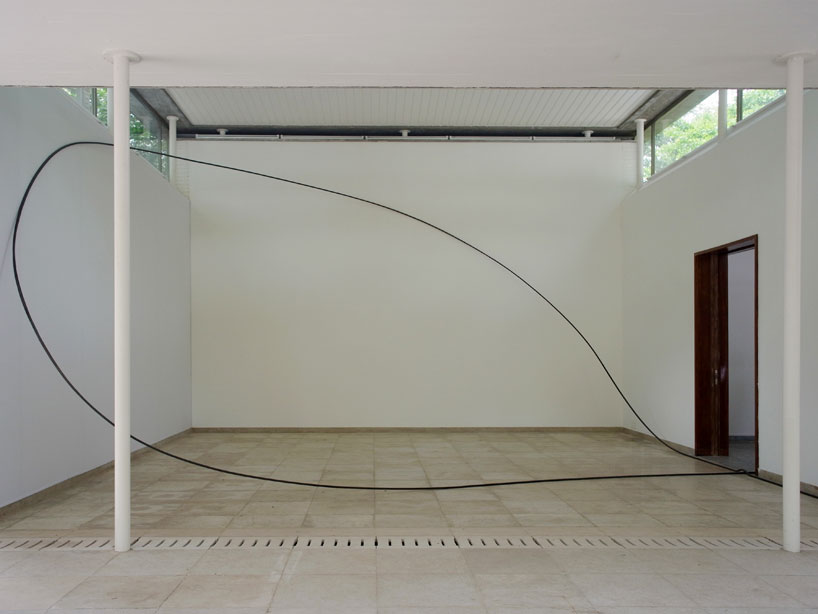 ‘salon suisse’ : platform for lively international exchange this year the swiss arts council pro helvetia presents the first ‘salon suisse’ to take place as an official collateral event to the 55th international art exhibition – la biennale di venezia. an accompanying talks and event programme, the ‘salon suisse’ was initiated at last year’s architectural biennale. it takes place at the palazzo trevisan degli ulivi in the heart of venice’s old town, offering a platform for exchange on contemporary art and thought in a relaxed atmosphere. referring to the tradition of art and literary salons in past centuries, ‘salon suisse’ aims to encourage an international dialogue among artists, specialists, scholars, students and other interested visitors from all over the world. the 2013 edition is curated by berne-based art historian jörg scheller who put together a challenging programme of events focusing on the legacy of enlightenment in the globalized art world and looking at the history of the biennale. five series of events will take place over the entire duration of the biennale with leading academics and arts practitioners. all events are free of admission and open to everyone. partner of ‘salon suisse’ is LAUFEN bathrooms AG. the company is is contributing to the events with the intention to participate in and encourage an international dialogue in the fields of arts and architecture. 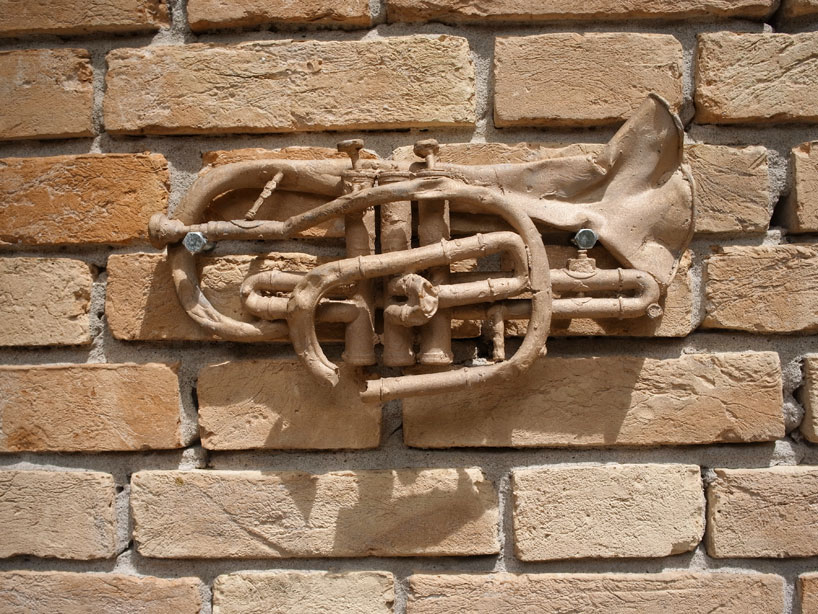 the instruments of ‘azure, uranium, umbrage’, eight bronzes that represent trombones, tubas and other brass instruments have been deformed and scattered on the walls of the pavilionimage © designboom

the bronzes are the result of a performative gesture not lacking in irony, in which the artist, simulating angry behaviour, stamps on the original instruments with his feet. the brutality is also conveyed in the casting of the works, which captures the gesture, on the one hand, while seeming to be suspended between shoddy workmanship and infinitely fine detailing, on the other.

there is also a 1967 piaggio ciao scooter parked in the middle of the courtyard (carron carefully restored it without being 100 per cent faithful to the original). this restoration work raises questions about adolescent desires, speed limits and even the correct tone of paint to use. see the image gallery below. 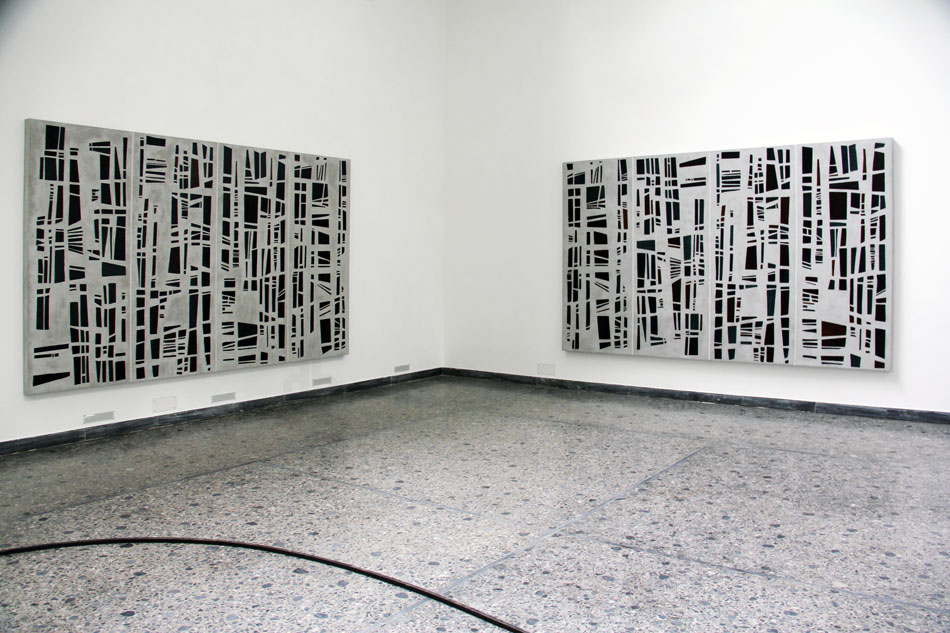 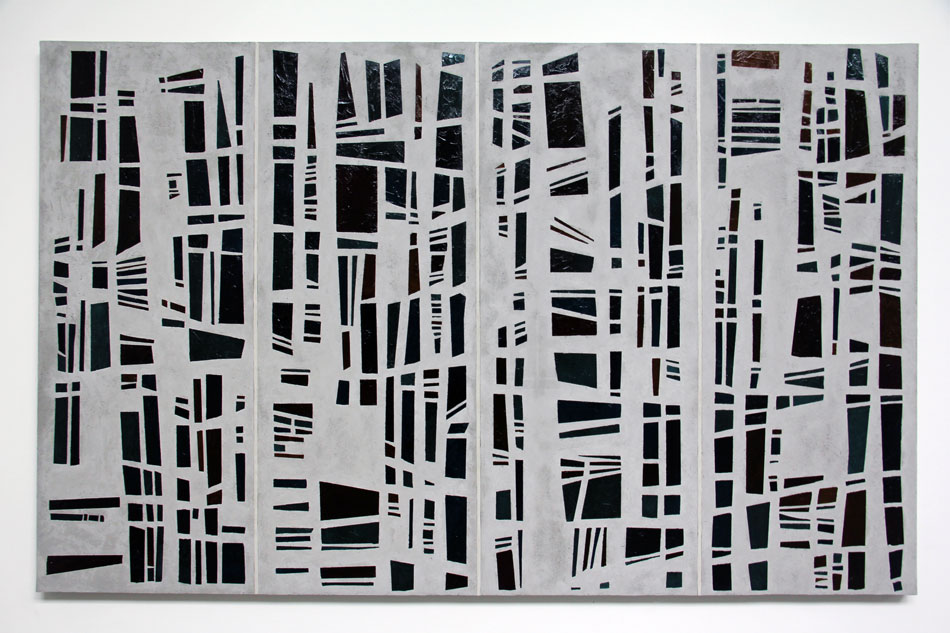 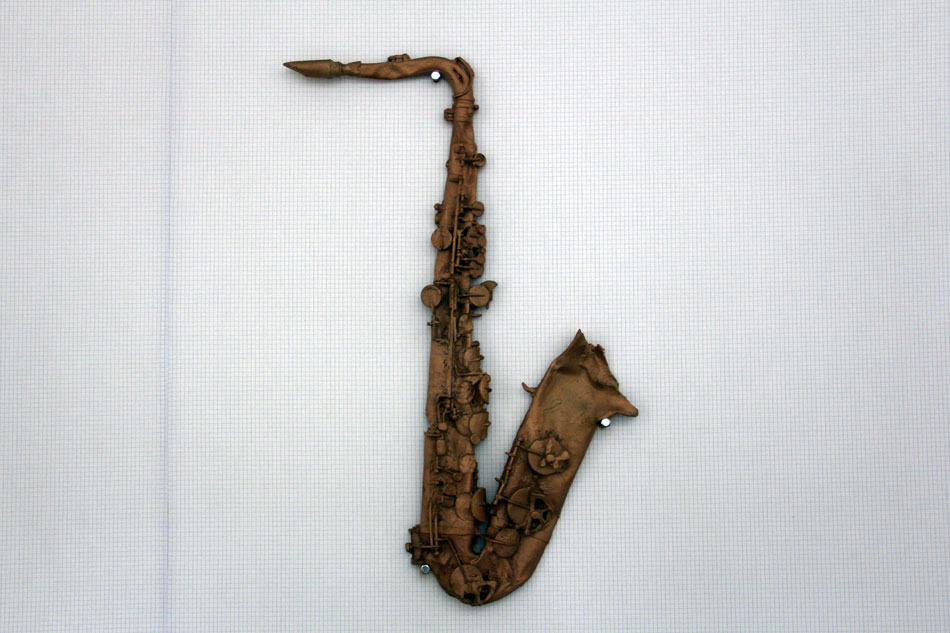 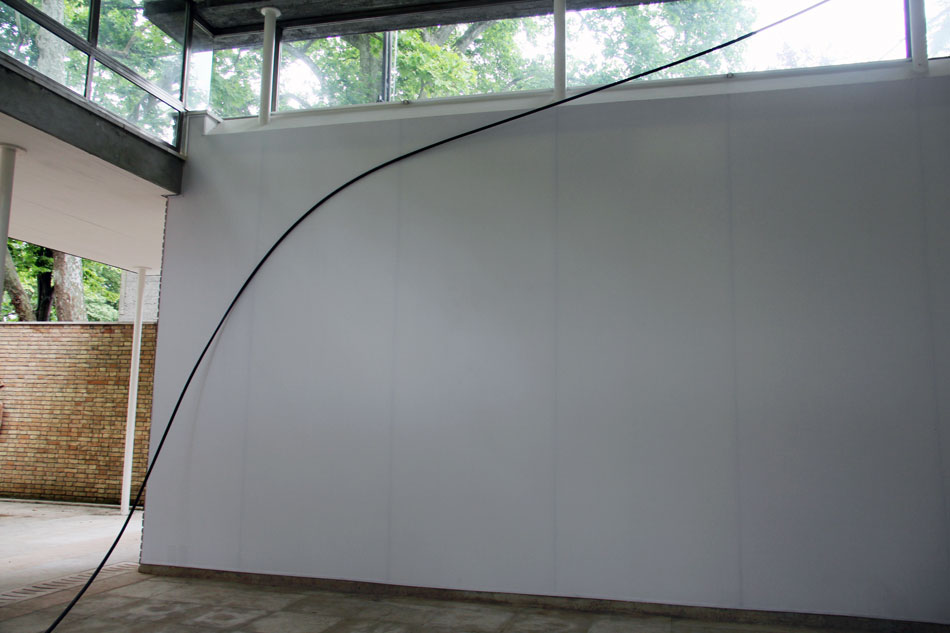 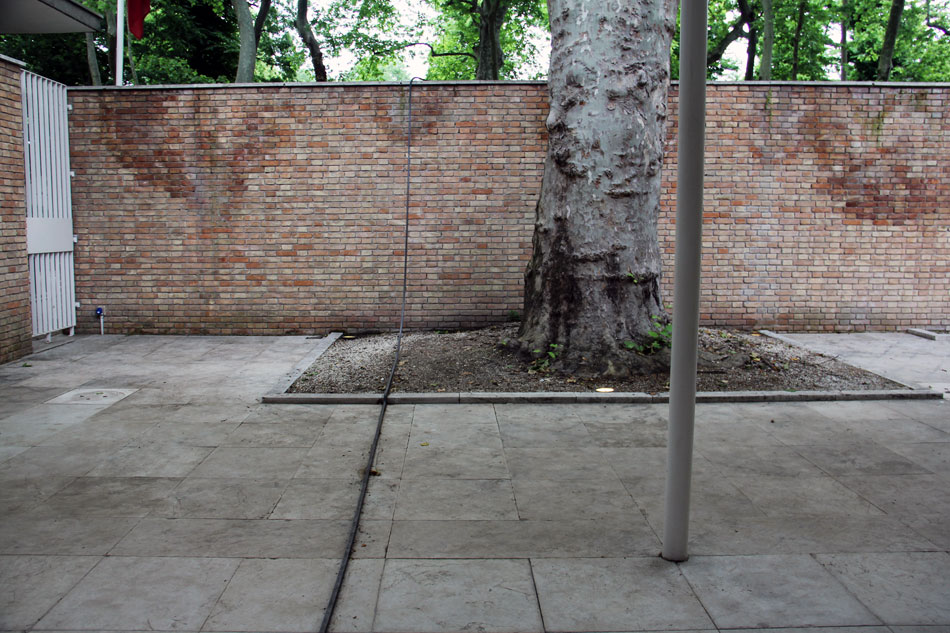 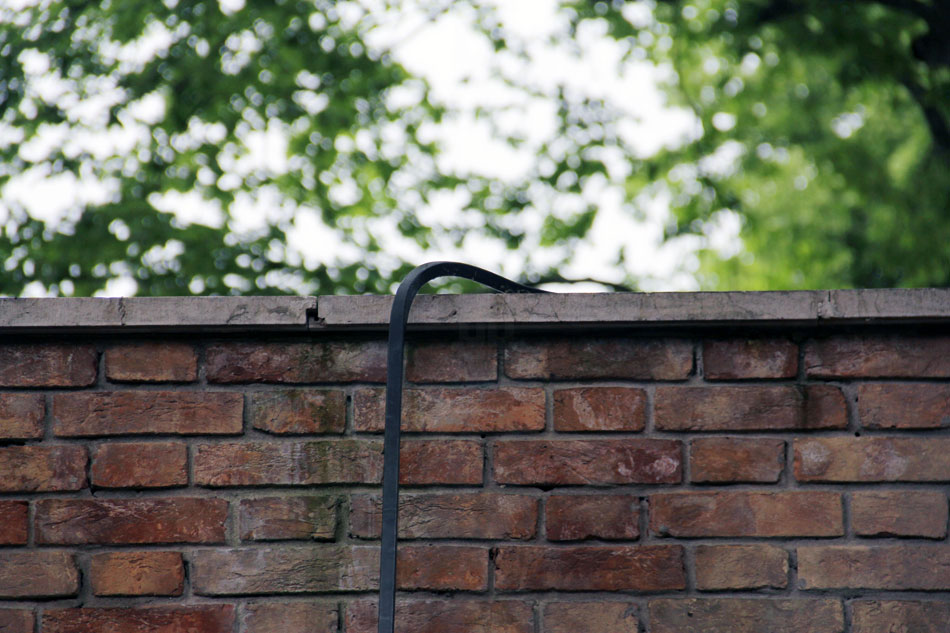 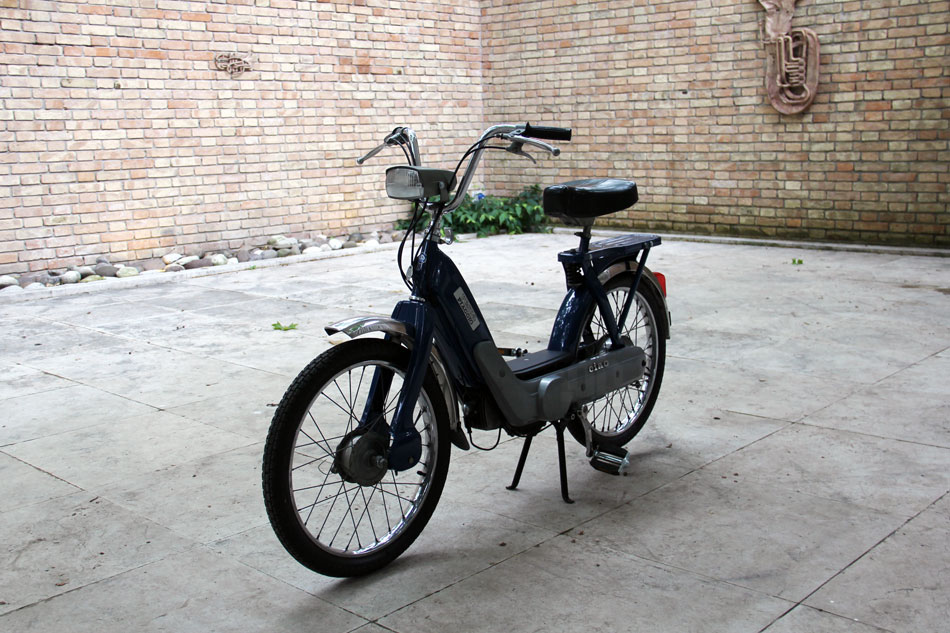 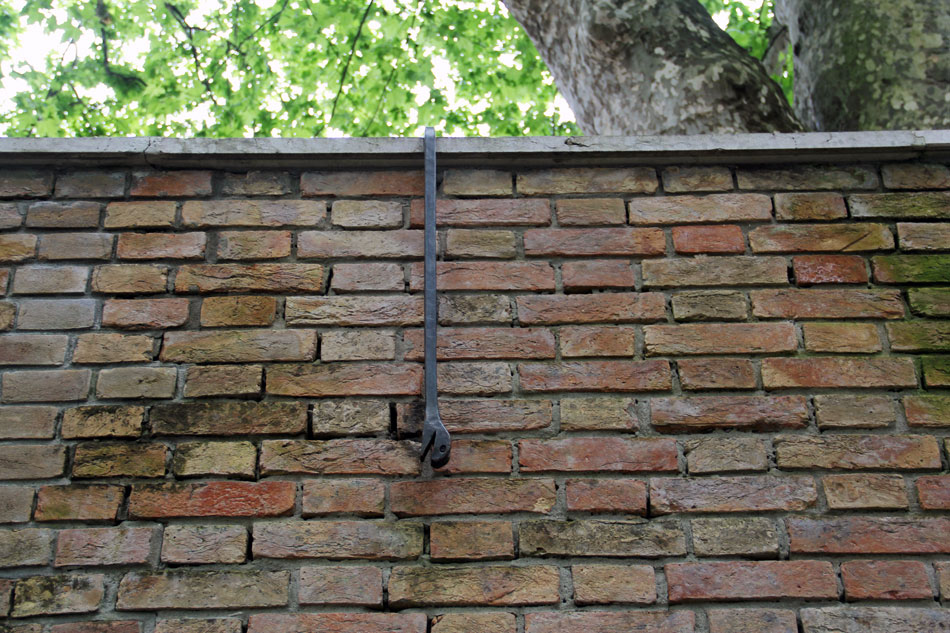 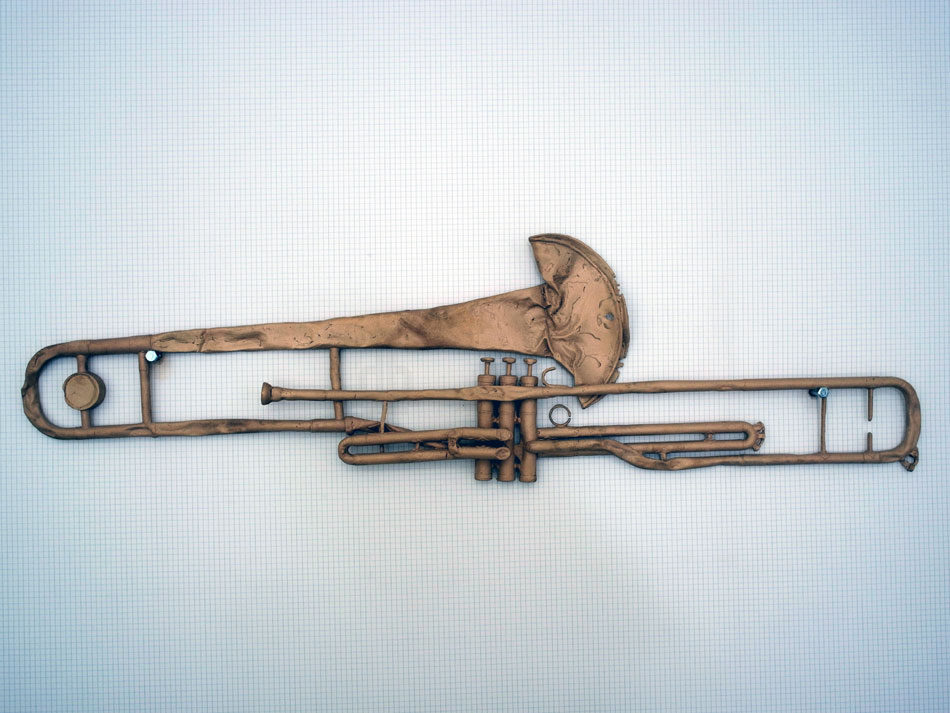 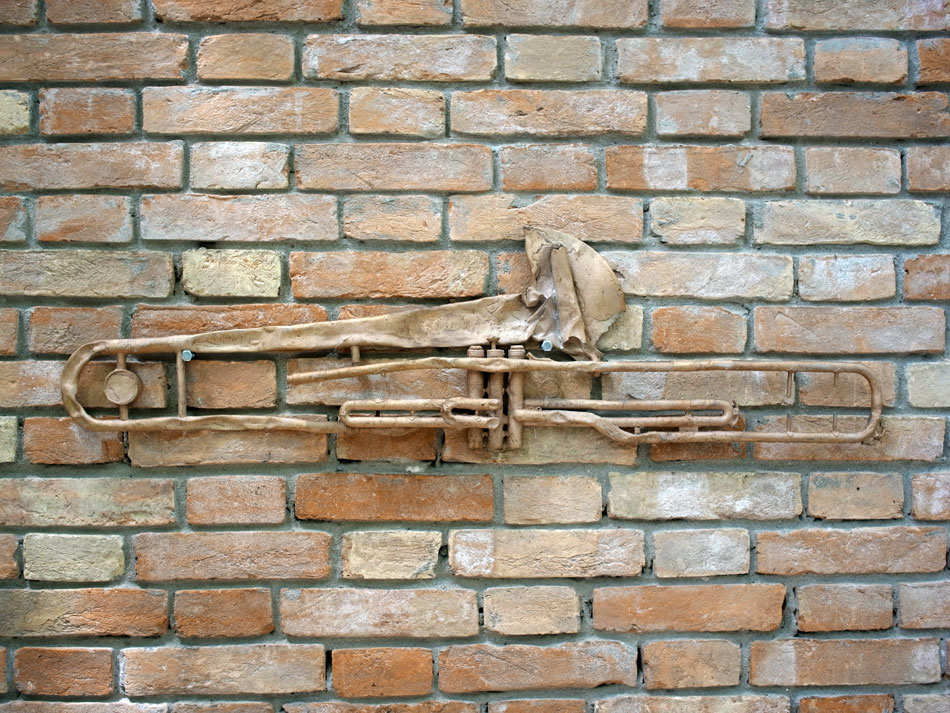 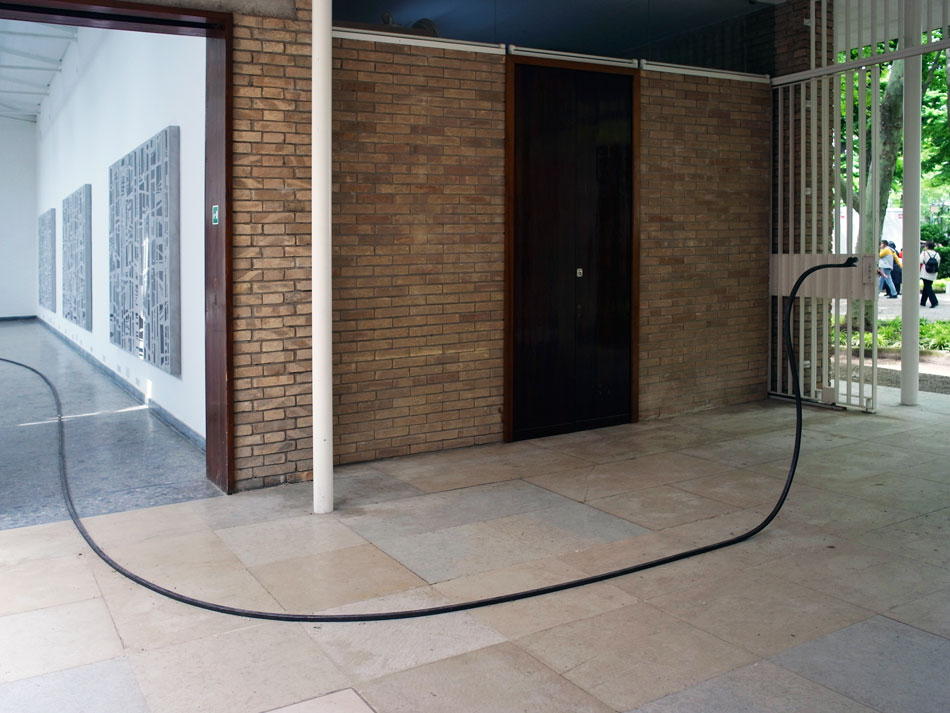 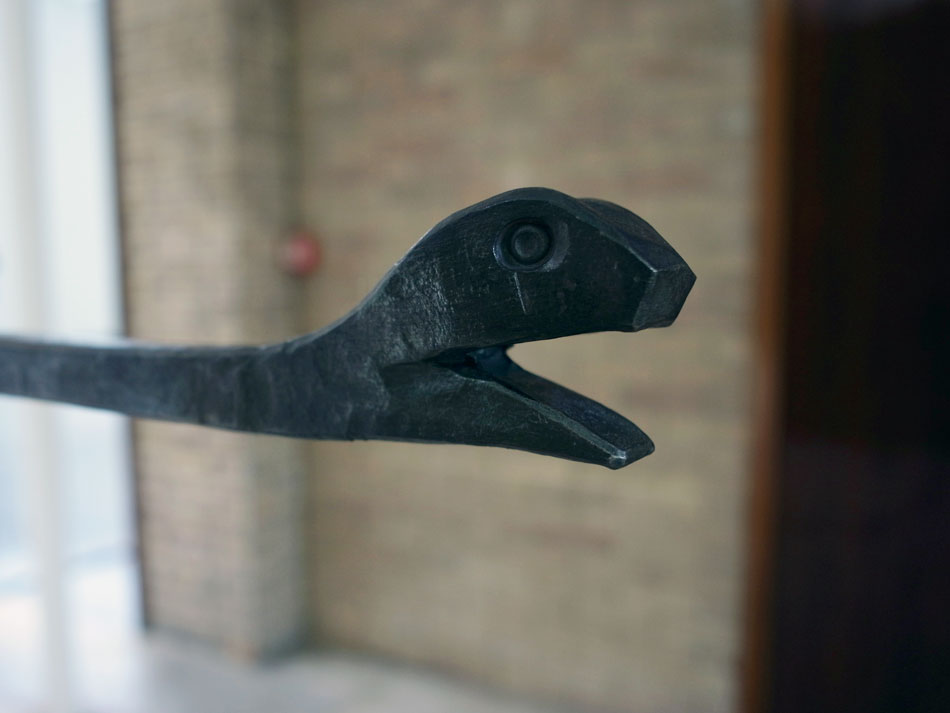 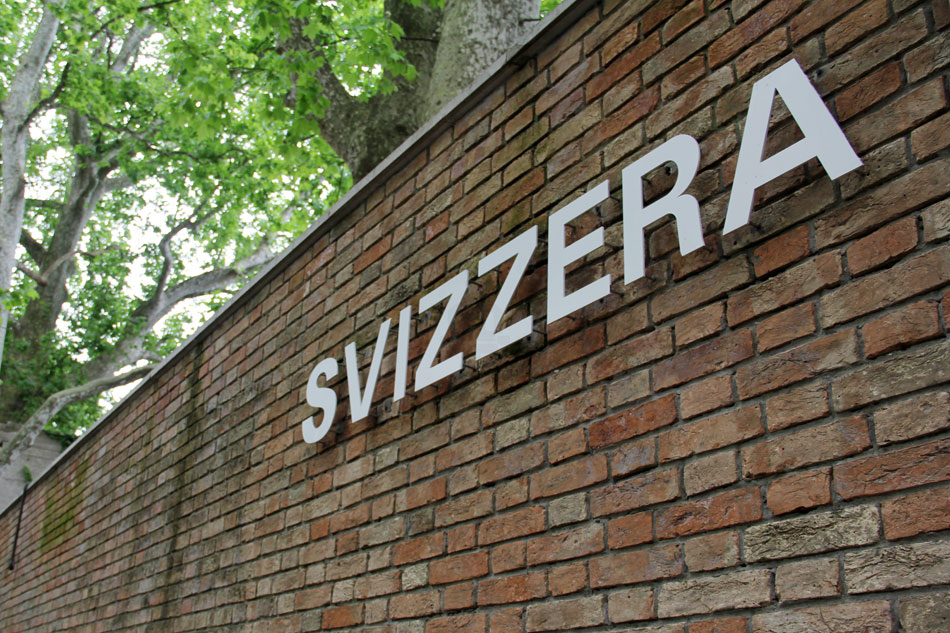 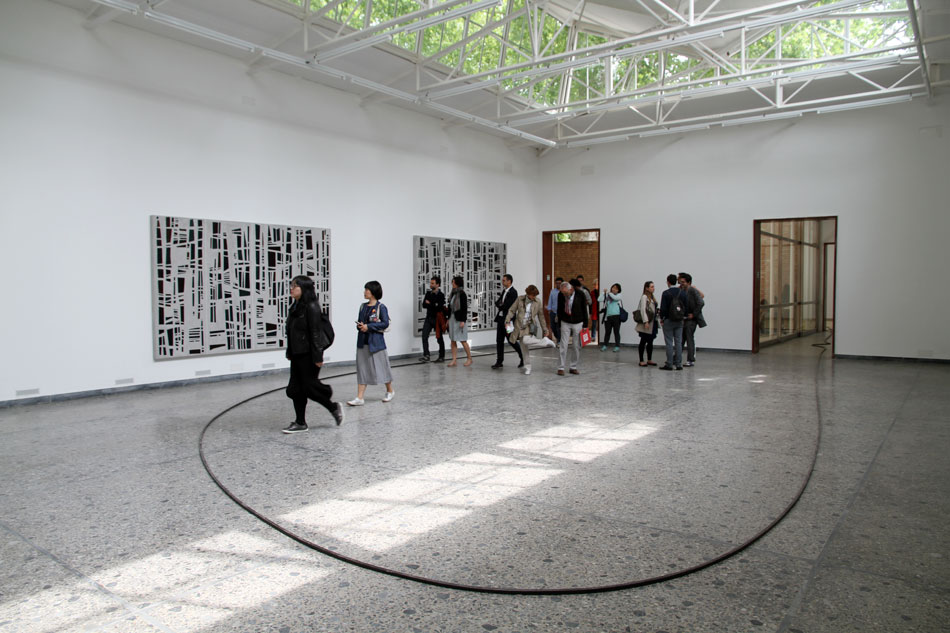