the show is composed of two parts: a new performance ‘VB65’ created especially for this exhibition at the milan contemporary art gallery PAC and 4 video projections of performances and videos ‘VB48’, ‘VB54’, ‘VB61’  and ‘VB62’. ‘VB65’  is a performance of 20 african immigrants, only men, seated at a 12m long table, dining as if at a last supper, dressed formally, a few did not wear shoes, but all were wearing black dinner jackets, suits, eating chicken, brown bread, drinking water, without platters or silverware, in front of an audience of invited guests. the 20 hosts of the supper sat silently eating during the opening (for 3 hours).

known for her performances during which numerous models enact the ritual of being and appearing, vanessa beecroft (born in genoa in 1969) is one of the most internationally recognized italian artists. she lives and works in los angeles, USA.

everything in vanessa beecroft‘s life revolves around food. beecroft has struggled to control an obsession with food since the age of 12. the spectre of anorexia haunted her teens and twenties, beecroft suffers from what psychiatrists call ‘exercise bulimia’, a compulsive need to burn off unwanted calories using excessive exercise. she is practising ashtanga yoga, ‘without it’, she says she ‘would go crazy’. vanessa beecroft announced herself boldly to the art world in 1993, after a professor at the accademia di belle arti di brera in milan, where she studied from 1988 to 1993, invited her to participate in a group show at the city’s inga pin gallery. she showed a performance of 30 girls, consisting of fellow brera students or girls found on the streets of milan, who were instructed to move around the space, dressed in beecroft’s own clothes. many of the girls were chosen for their resemblance to beecroft, and were themselves struggling with eating disorders. this first performance set the blueprint for beecroft’s future as a conceptual artist. since then, she has staged many more performances around the world (all titled VB01, VB02, VB25, VB45, etc), and each was more elaborate than its predecessor. 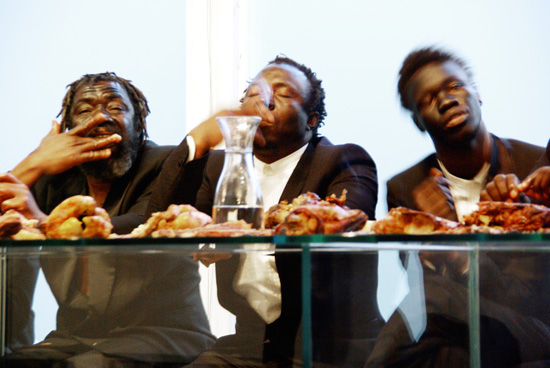 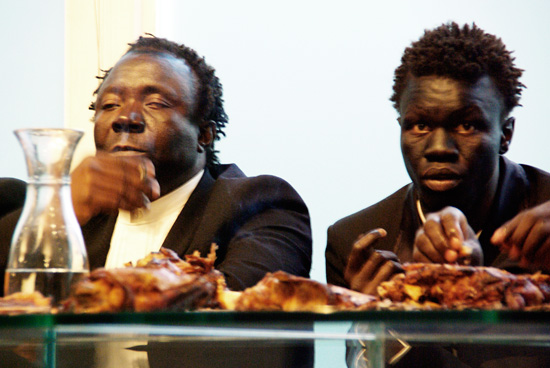 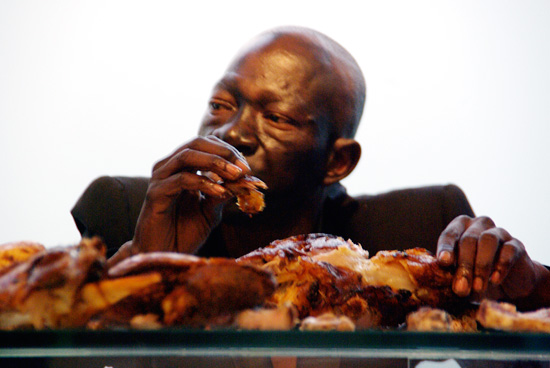 no plates, no cutlery, they are eating with hands image © designboom

earlier performances featured girls wearing high heels, cheap costumes and wardrobe, allusions to european cinema (films by rainer werner fassbinder, jean-luc godard, luchino visconti) and classical painting (rembrandt harmenszoon van rijn, hans holbein, piero della francesca), her works also come out very much from the tradition of performance art: marcel duchamp, yves klein, gilbert and george. the more recent performances featured girls wearing clothes and accessories loaned or specially created by famous fashion designers (from prada, to tom ford, and helmut lang). the girls have also become increasingly stripped, most performances since VB23 have featured full nudity. she makes the girls stand for up to three hours in uncomfortable positions, and told them they should not have eye-contact with the audience. 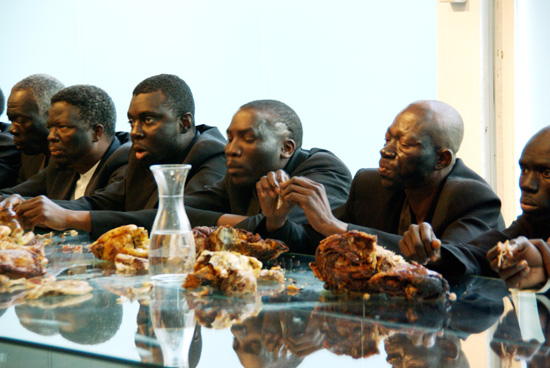 no glasses, they drink out of the carafes image © designboom 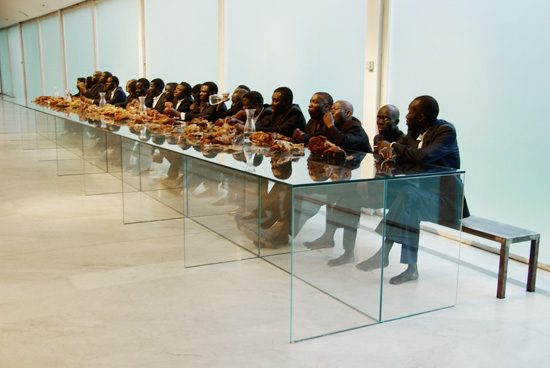 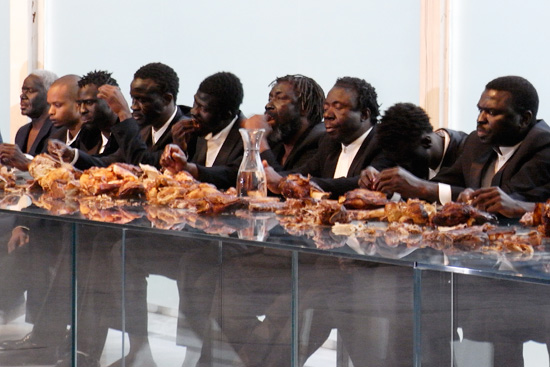 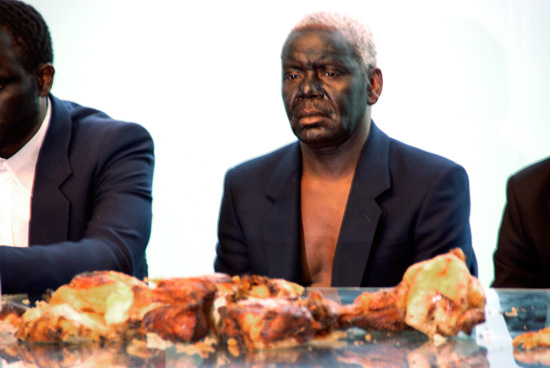 among her most recent works is ‘VB61: still death darfur still deaf’, 2008. the performance featured 30, mostly-nude women in a public place, only this time they’re painted pitch black and covered with buckets of fake blood. beecroft stands over the bodies, with red liquid dripping from her hands and splattered all over her feet. in ‘VB64’, 2009 the performance featured live models, soaked in white, as though they were cast as sculpture. the line between the inanimate and authentic human forms could only be traced by the blink of an eye or the slow and subtle change of position. a grecian panalopy. 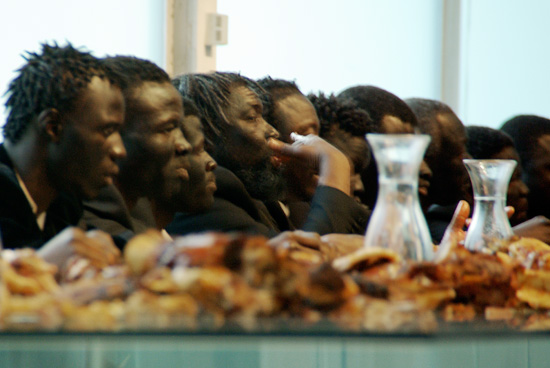 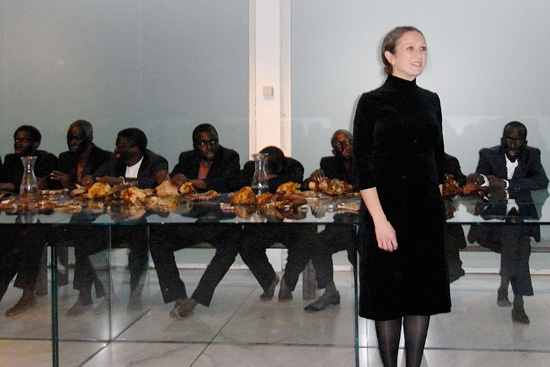 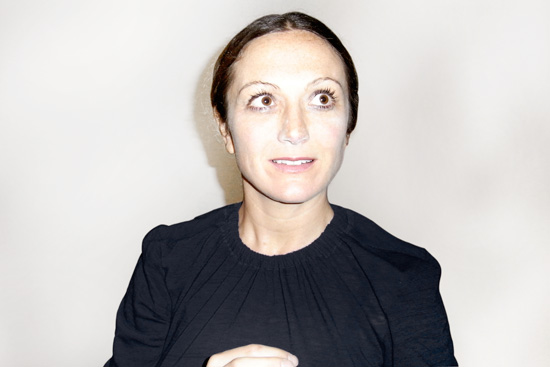 it was the first time of vanessa beecroft in a public exhibition space in milan. exhibition curated by giacinto di pietrantonio,  organized by PAC  in collaboration with MiArt and sponsored by tod’s. catalogue available in italian and english language, published by electa.

see images of  the press conference 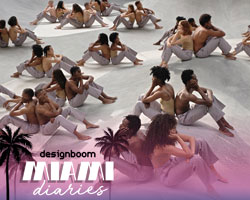 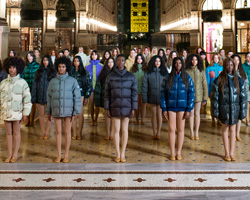 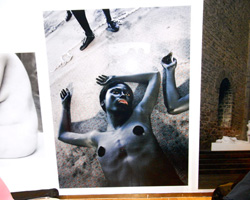