the 58th international art exhibition of la biennale di venezia, held in locations throughout venice, italy, opened to the public on may 11. titled ‘may you live in interesting times’, the venice art biennale will remain open until november 24, 2019. planning a trip? here’s what you won’t want to miss.

designboom selected the 15 best presentations (listed in alphabetical order) out of a total of 89 national participations in the historic pavilions at the giardini, at the arsenale and in the city centre of venice. all images by designboom, if not otherwise stated. 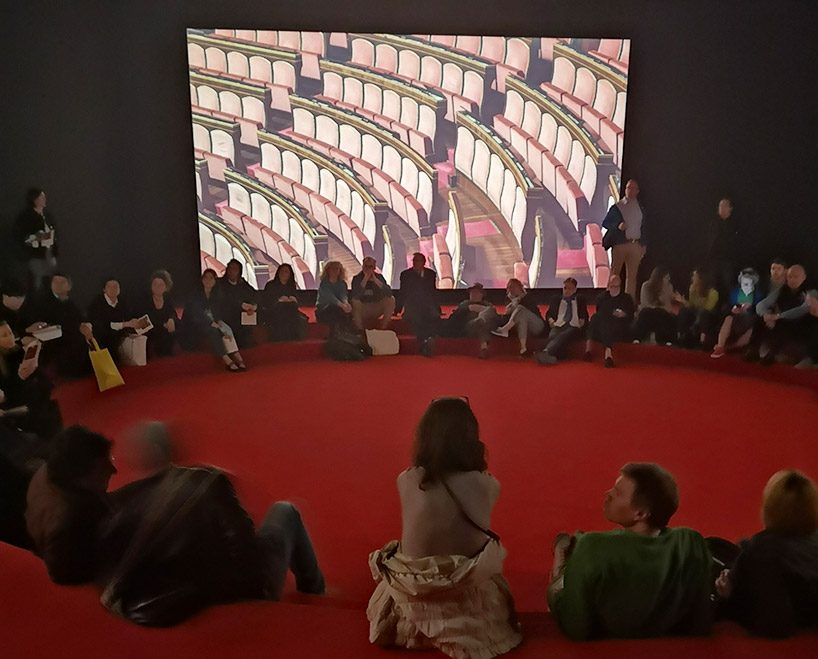 angelica mesiti intended to turn the australian pavilion into a site of democracy and community. visitors can take place in a mini amphitheater where a three-channel film elaborates on of conflicting voices and viewpoints. filmed in the plush senate chambers in italy and australia, the work encourages listening and recognizes the ways that we communicate. the piece starts with an operator of a device used by stenographers – known as the michela machine – who translates a poem by david malouf, then had the resulting coded language turned into music by composer max lyandvert… we won’t tell you more. expect that with exuberant energy mesiti demonstrates the creativity and strength of community at a time when ‘democracy’ is fragmenting and failing. 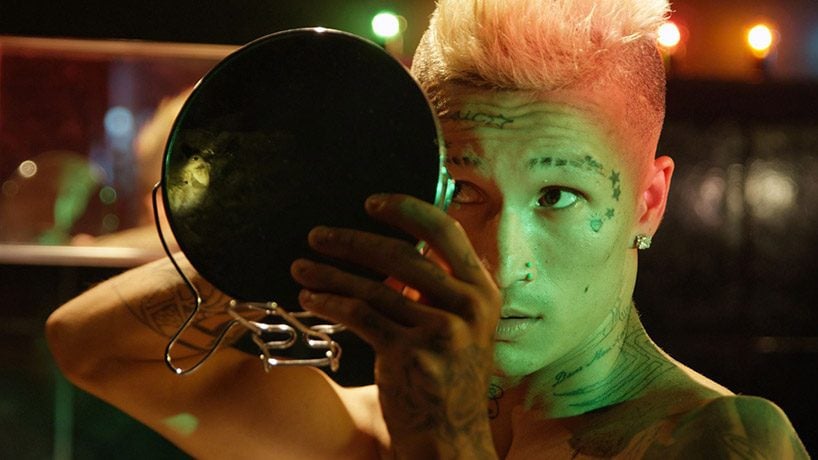 swinguerra takes its title from swingueira, a little-known but locally very popular dance phenomenon of the music genre in the north-east of brazil, fused with the word guerra, meaning war. in the city of recife, groups of young, black brazilians (many of whom are nonbinary) form groups of as many as 50 to 100 dancers, that rehearse their choreography several times per week, to be able to enter into national competitions. bárbara wagner & benjamin de burca’s two-screen swinguerra film is a documentary-esque piece that provides a deep and empathic view of contemporary brazilian culture at a time of significant political and social tension.  swinguerra shows incredible dedication, athleticism, synchronicity and is sharing an understanding of the complexities of contemporary self-representation and awareness. 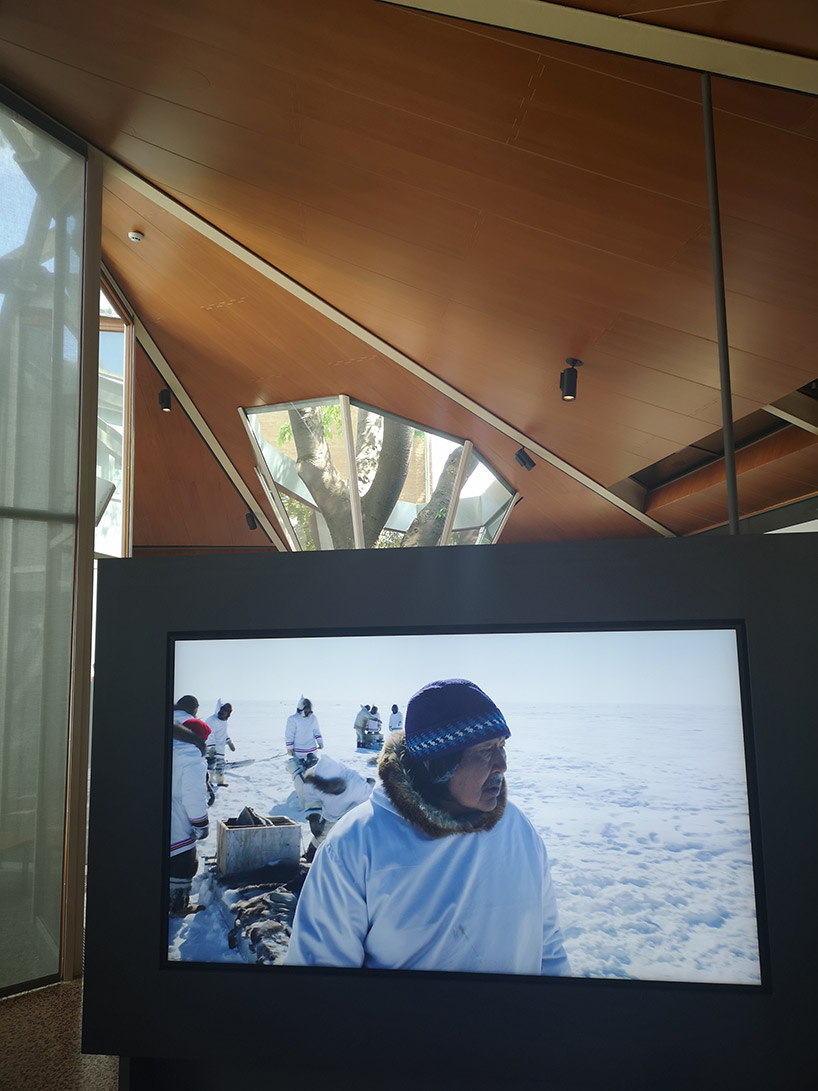 an artistic collective called isuma is canada’s first inuit video-based production company that aims to preserve inuit culture and language and to present inuit stories to inuit and non-inuit audiences around the world. isuma, meaning ‘to think, or a state of thoughtfulness’ in inuktitut, reclaims the history of canada’s forced relocation of the inuit people in the 1950s. not sure if it’s documentary or ART, but beautifully done and a powerful communication. 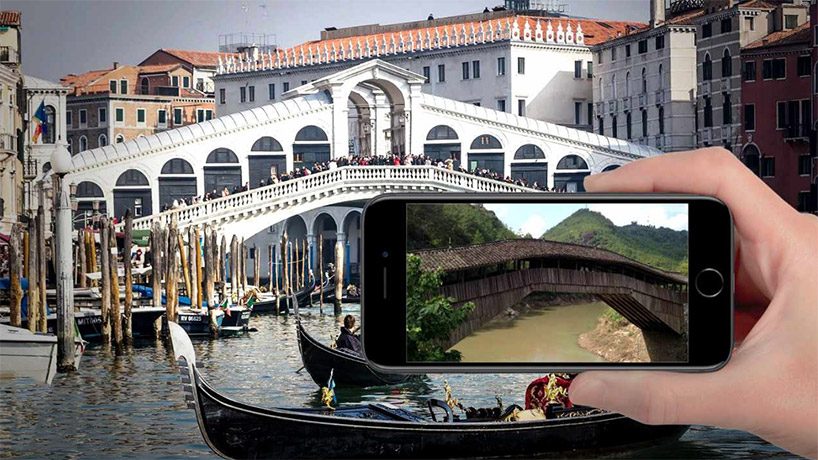 the exhibition integrates artificial intelligence, new media, and the traditional logic of the chinese art, intersect the parallel world, the virtual and reality, and hence create a multidimensional experience beyond time and space. he xiangyu’s installation ‘everything we create is not ourselves’ is made of soft carpet in a warm shade of pink designed to mimic the interior of a mouth. chen qi shows ‘elsewhere’ installations inspired by wormholes found in an ancient chinese books and their relationship to contemporary scientific research on the subject. geng xue presents ‘the name of gold’, a stop-motion animated film of clay sculptures that explores the mystic nature of reincarnation (on a 10 meters high and 4 meters long screen). fei jun created elaborate augmented reality apps ‘research’ that invite users to go on a treasure hunt around venice to identify old venetian bridges that are similar to old chinese bridges (displayed on the mobile phone screen)… we particularly loved the work ‘the born and expansion of 2012’ by chen qi. 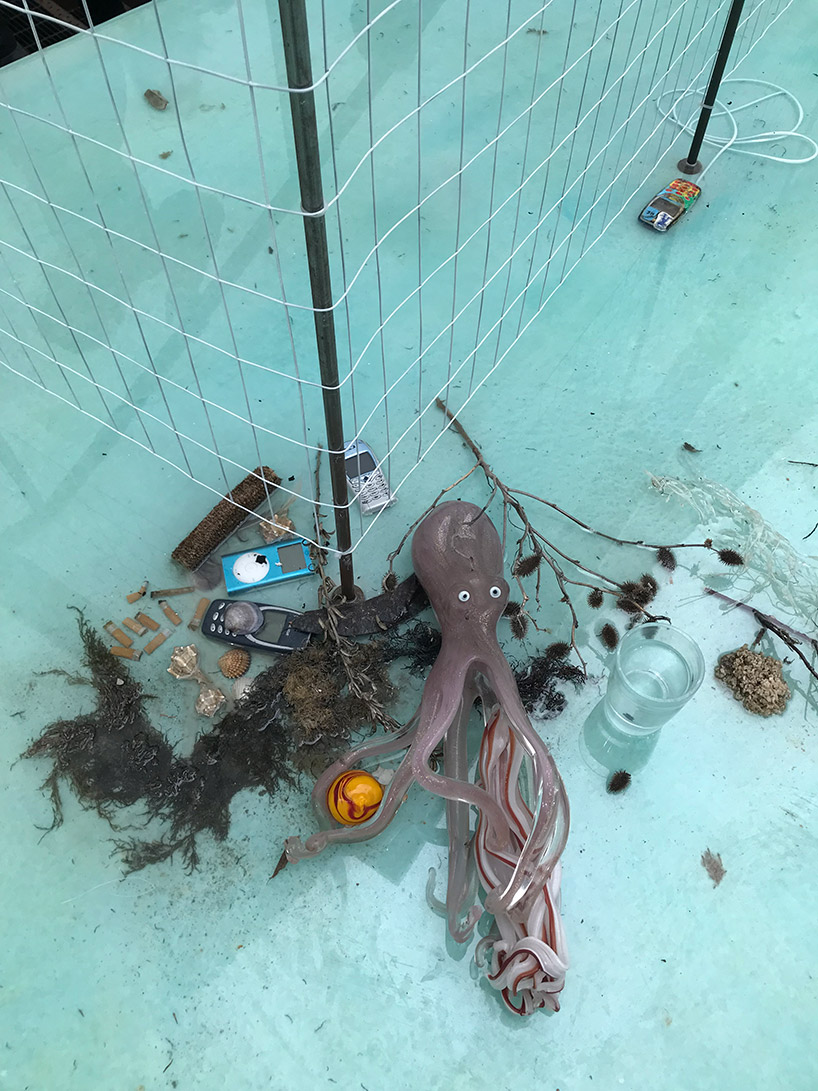 long waiting lines in front of the french pavilion discouraged a visit during the preview days. on the first day of public view, we came early and took on a euphoric journey…we were given a mask and entered a rubble-filled basement, took the stairs to a bright-white room with a clear, seafoam-blue floor and meticulously arranged still-lifes of cell phones, branches, eggshells, murano glass sculptures of octopus and other sea creatures, doves… soft gray curtains led us to laure prouvost‘s joyous, visually stunning film of a group of young people on an escapist journey (traveling from paris to venice) towards an ideal elsewhere, and challenges the representation of a fluid and globalised world, in which diverse unveiled and shared realities intermingle. a sculptural in situ installation enriches the experience. well done! 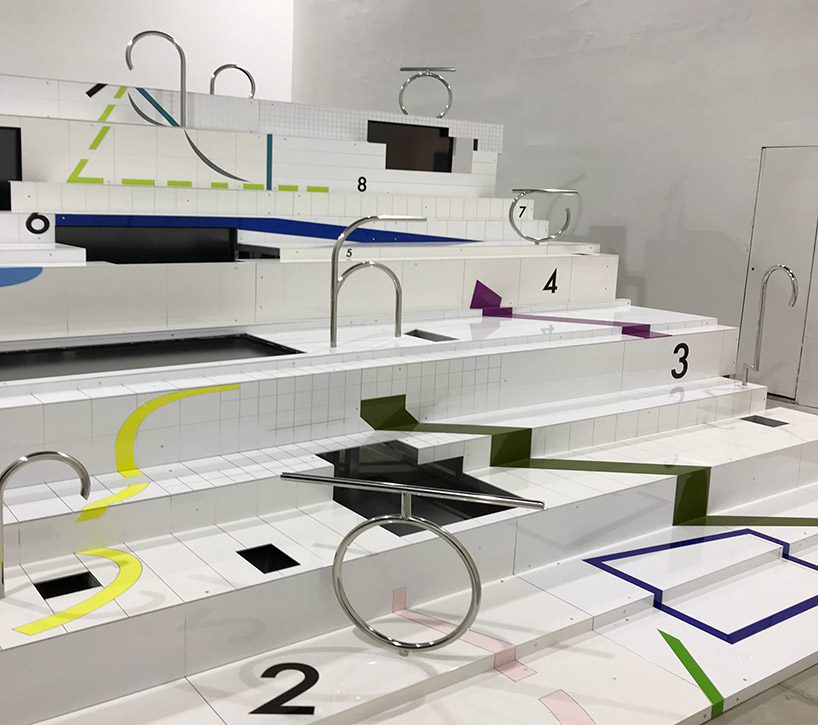 anna K.E. has conceived an architectural environment of stairs and steel faucet-like sculptures, which circulate water, and are based on the original georgian alphabet, interspersed throughout are videos that feature her own body as protagonist – restricted, contorted, or isolated – often pointing toward an evolving interdependency between our corporeal and digital selves. a sleek synthetic model of (in equal parts) public stage, ascending and descending tribunal platform, communal fountain, and sculptural object of observation. 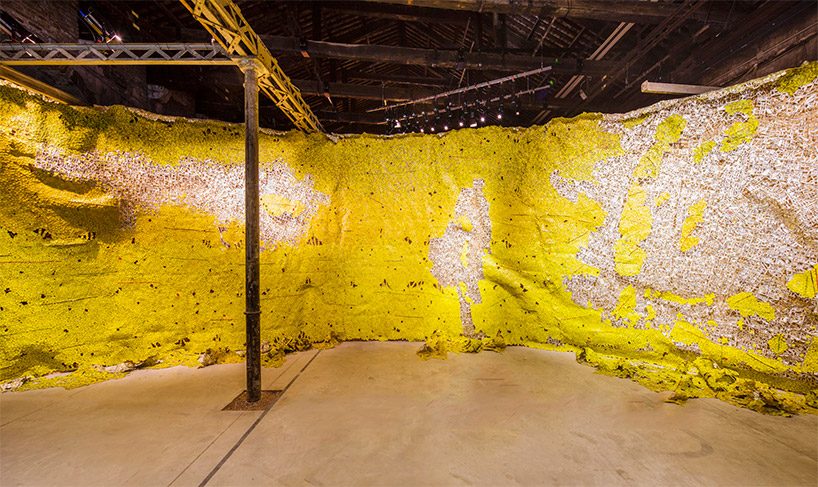 ghana’s first-ever national pavilion at the venice biennale — the show titled ghana freedom, after the song composed by E.T. mensah on the eve of the birth of the new nation in 1957, in the elliptically shaped pavilion, designed by sir david adjaye, examines the legacies and trajectories of that freedom by six artists, across three generations. a triumphant tribute to the country’s deep cultural roots. new tapestries by el anatsui, three-channel films by john akomfrah and selasi awusi sosu, self-portraits and studio images of felicia abban, paintings by lynette yiadom-boakye and a cabinet installation ‘a straight line through the carcass of history’ by ibrahim mahama includes smoked fish, adding a distinct fragrance to the space :-). the pavilion is dedicated to the former biennale curator curator okwui enwezor and will travel all the way to ghana to be shown there. take your time and watch ‘the elephant in the room – four nocturnes’ (2019) by john akomfrah.

italy
enrico david, liliana moro, chiara fumai
‘neither nor: the challenge to the labyrinth’ curated by milovan farronato
@ arsenale 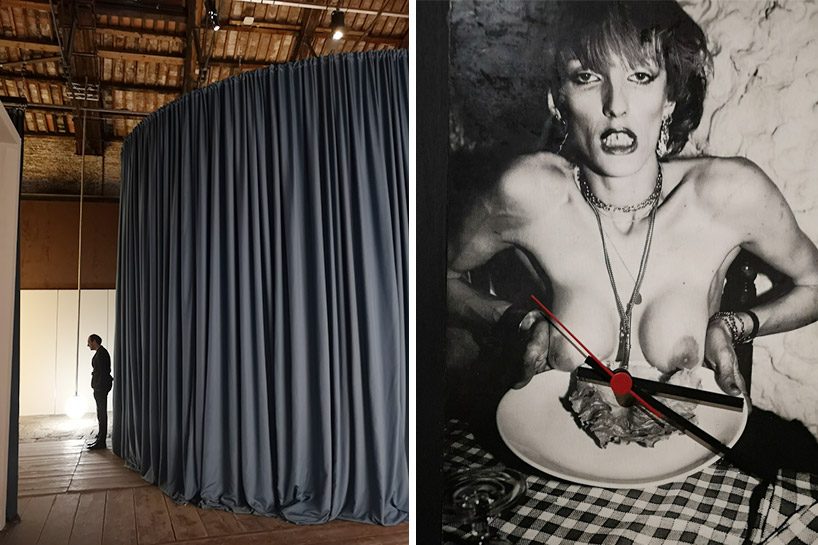 expect to get lost in venice — the labyrinthine experience of the city is a perfect setting for the italian pavilion. neither nor: the challenge to the labyrinth, entitled after a famous essay written by italo calvino in 1962, the exhibition features never-before-seen and historical works of three major italian artists: enrico david, chiara fumai and liliana moro. the works on display and the installation itself converse and overlap to form a tangle of lines, forms, and tendencies reflecting the impossibility of reducing knowledge to a series of predictable trajectories. 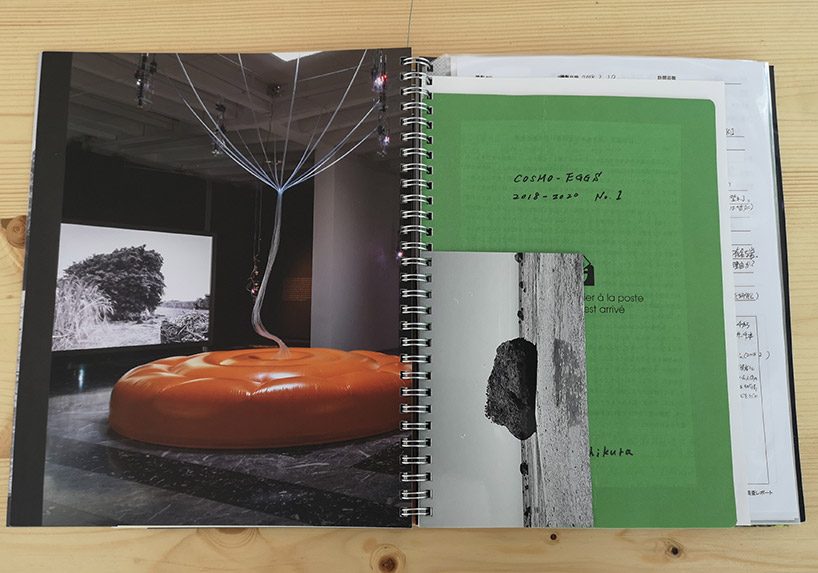 a collaboration between an artist, a composer, an anthropologist, and an architect. four black-and-white films by motoyuki shitamichi capture ‘tsunami boulders’ washed ashore from beneath the ocean and are accompanied by automated sounds, controlled by an algorithm that never repeats. cosmo-eggs ‘singing bird generator’ by the composer taro yasuno are performed on recorder flutes, and allegories developed by toshiaki ishikura in reference to various local beliefs and folklore related to the tsunami. a large orange inflatable bench creates an unified spatial experience, that when sat on pushes air through tubes to play the recorders. fuminori nousaku was inspired by the architecture of the japan pavilion, linking together images, music, and texts… 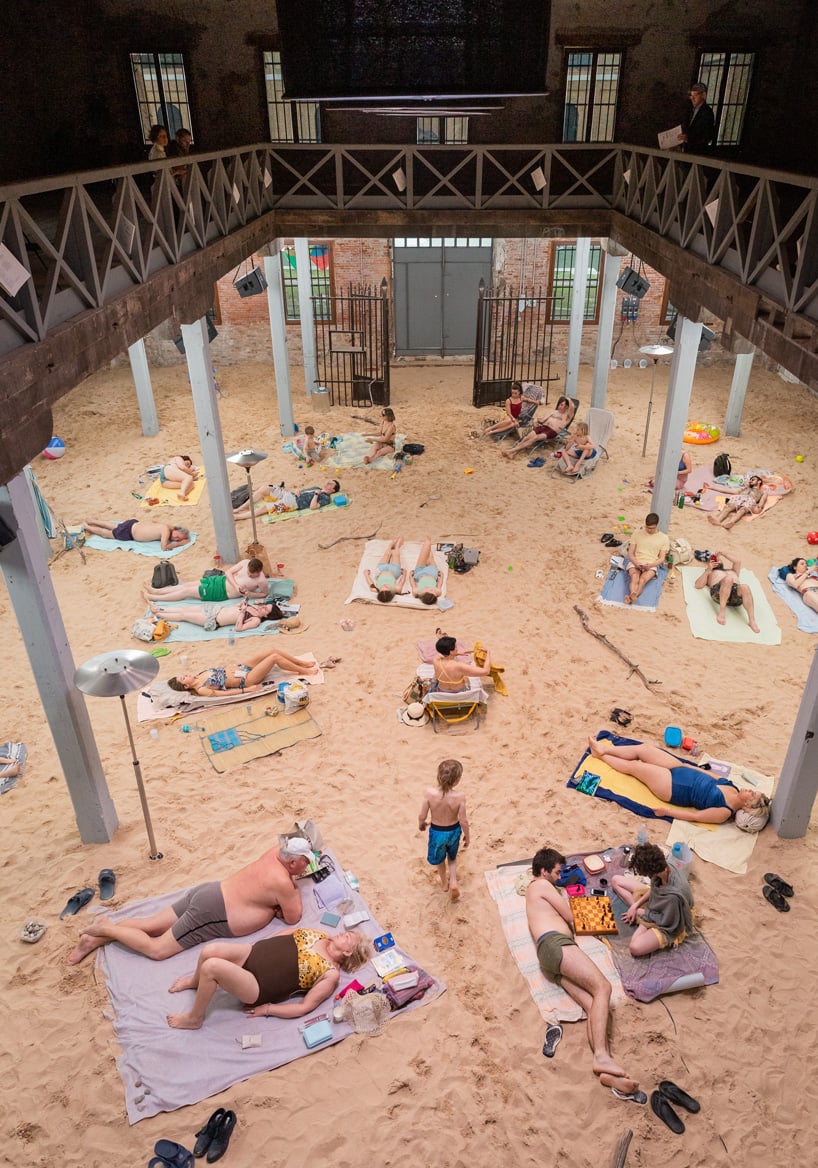 the lithuanian pavilion was awarded the prestigious golden lion prize! it’s an opera about climate change set at the beach with performance every saturday, 10 am – 6 pm. you watch the happening from a viewing platform: a surreal beach with towels, chairs, bright-colored swimsuit-clad performers and seaside paraphernalia (lunch boxes, sudoku, colouring books). their angelic voices arefilling the room about travelers that tell stories of air travel interrupted by a volcanic eruption, a scuba diving trip to the milky white great barrier reef, and a X-mas time spent in springlike weather… 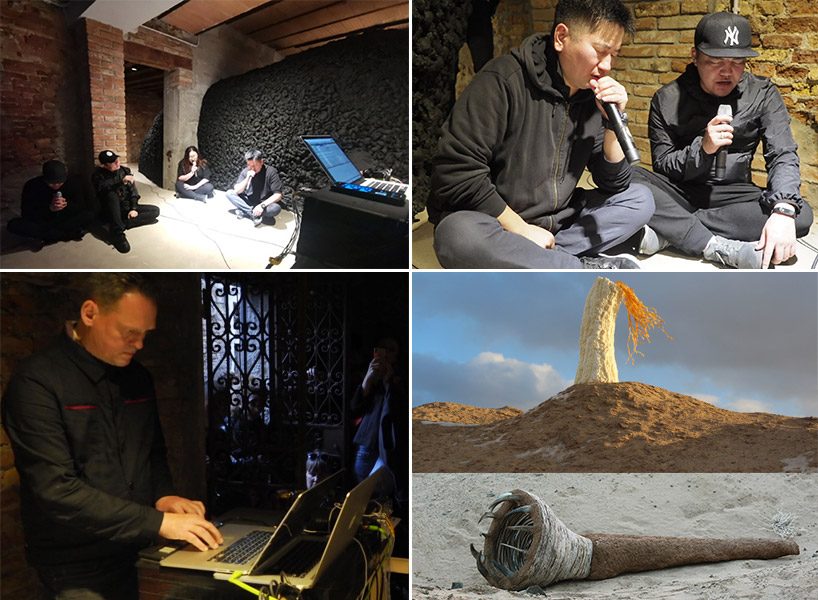 jantsankhorol erdenebayar created a magical rural setting for the mongolian pavilion. experimental sound-making traditions practiced by mongolian nomads for centuries as a way to communicate with their inner selves and surrounding nature are brought to the public via an interactive sound performance by traditional mongolian throat singers, accompanied by guest artist carsten nicolai. techniques of such oral expressions have acquired unique and complex forms and are registered by UNESCO as intangible cultural heritages.

roman stańczak cut a luxury private airplane in half and reconstructed it inside-out. the surrealist sculpture is a monument to the paradoxes of modernity and a commentary on polish capitalist transformation. a metaphor for the reverse of the modernisation processes and a commentary on inequalities, the so-called 1% – the rich élite, problems with redistribution, resentment, and populism. maybe a bit too obvious, but nicely done. 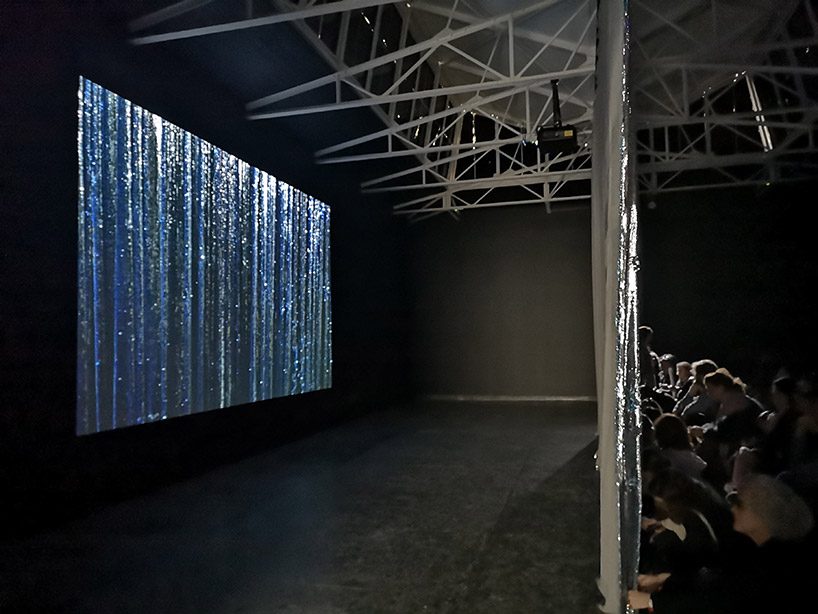 another one of several countries with a line out the door during the biennale preview, ‘we do not feel represented by our governments and do not agree with decisions taken in our name’ reads a letter welcoming visitors. the exhibition explores the resistance practices that combine guerrilla techniques, postmodern choreography and urban dance, as well as elements of queer underground culture. the artists propose a recipe for the contemporary state of the world: ‘let’s collectively move backwards’. in a large film installation, five dancers in the environment of an abstract nightclub are shown, sometimes moving in reverse, to the point where the viewer is left wondering which way is forward (a poignant question for the present moment). boudry and lorenz were inspired by kurdish women guerrilla fighters, who deceived their enemies about their movements by wearing their shoes backward as they walked through the snowy mountains. the sound is great and the moves strangely motivating (actual backwards motions seamlessly mixed with digitally reversed footage), occasionally interrupted by a sequined curtain – we had a hard time not to step on stage and dance along. 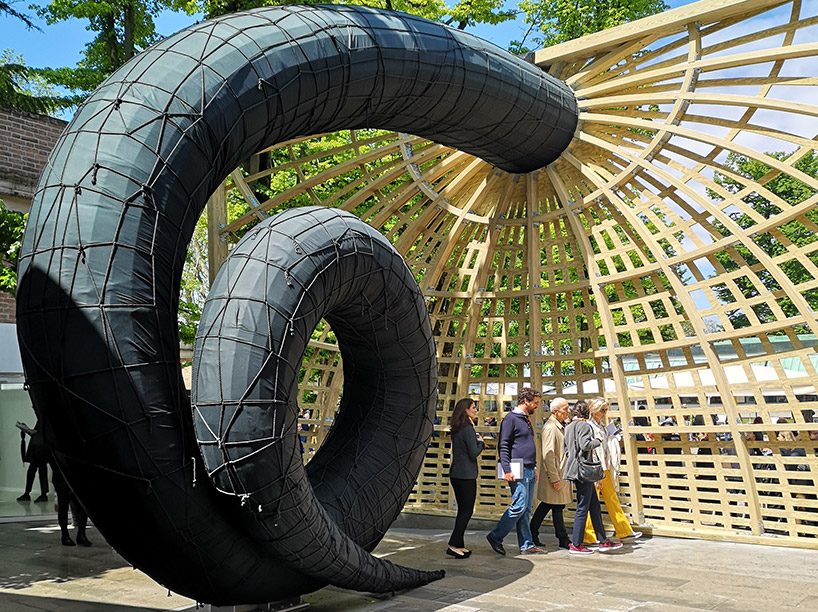 the artist’s work shares minimalism’s faith in plain, solid forms and the hand is still his sovereign tool. the eight sculptures in his show, with their large forms, are painstakingly hand-planed and carpentered in natural materials (mostly wood). in his case, solidity is often an illusion: the ‘bower’ basket seems to have been turned upside down to become a trap, ‘swallowed sun (monstrance and volute) at the entrance shows a black, twisting tube, inspired by a detail on a greek column but resembling a snake,… a solid body of work!

stay tuned to more — our upcoming articles on the venice art biennale 2019.
you might also want to see our dedicated instagram coverage @venice.art.biennale !