In a project of discovery and imagination, VizArt is a data visualization and 3D cartography studio based in Orvieto, Italy, that specializes in interactive visualization, static infographics, geovisualization, and 3D shaded relief maps. The studio was founded by Silvia Spacca, a graduate in Entertainment Disciplines and Film Engineering, and Leonardo Zanchi, a graduate in Computer Science with a specialized degree in Virtual Reality and Multimedia. In an innovative collaboration, Leonardo’s growing interest in data visualization found a new dimension with the application of Silvia’s 3D modelling knowledge, merging the two initially unknown fields and propelling a constantly evolving visual journey. Through the combination of traditional cartography and the use of satellite data, places far away in time and space are brought to life and made tangible, culminating in a series of vintage and modern 2D prints depicting 3D shaded relief maps that are available for purchase. VizArt’s cartography works include rendered and enhanced topographical maps, hypsometric relief maps and data visualization infographics. Their projects have been completed with the support of cartographers Daniel Huffman, Peter Atwood, Morgan Hite and Joshua Stevens, who have contributed their professional cartography and georeferencing techniques and knowledge. 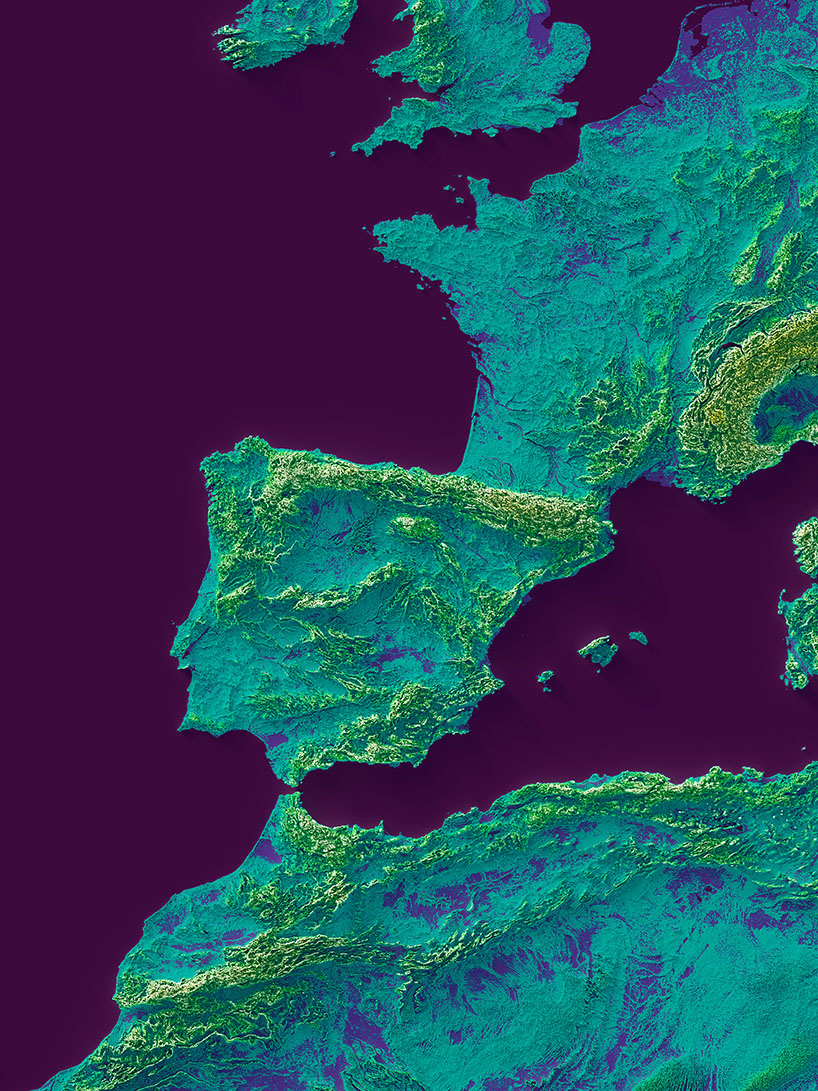 detail of an elevation tint viridis of Europe

all images courtesy of VizArt

The Italy-based studio’s work has been completed with the support of cartographers Daniel Huffman, Peter Atwood, Morgan Hite and Joshua Stevens, who have contributed their professional cartography and georeferencing techniques and knowledge. With their cartography work, the first phase of VizArt’s projects involves research, including looking for maps, the licences that bind them, and the years of realization. Once Silvia and Leonardo have chosen a potential candidate, they carry out a thorough check of the state of preservation and an assessment of digital restoration possibilities. Restoration work may consist of the removal of some stains due to the wear and tear of time, colour correction, reconstruction of missing or torn parts, or the removal of the sheet fold mark. Next, the map is georeferenced. Using the information provided by the map itself, often simply the year it was made and the scientific agency that commissioned it, the appropriate projection is sought in order to place it correctly in geographical space. This is followed by the search for and positioning of digital elevation models, which, depending on their type, convey information on natural geographical reliefs, and general surfaces such as vegetation and buildings.

After this information is processed several times, Silvia and Leonardo combine the created elements with three-dimensional modelling software. This decides the light, the extent of relief to be shown, and the depth of shadows, and then the final product begins to be configured, somewhat like a photograph or rendering. Just like in a photograph, the temperature or intensity of light temperature, or the inclination of a lamp attribute each final image with a different quality and feel. ‘Since the papers we make are meant to be an artistic product, not technical papers, the emotional and visual aspect of the images is favoured, so in some cases the reliefs have been exaggerated to emphasise the evocative elements of a particular area’, comments VizArt. This enhancement is evident in their series of Ipsometrical maps where colours have been assigned according to elevation, which has been greatly increased. 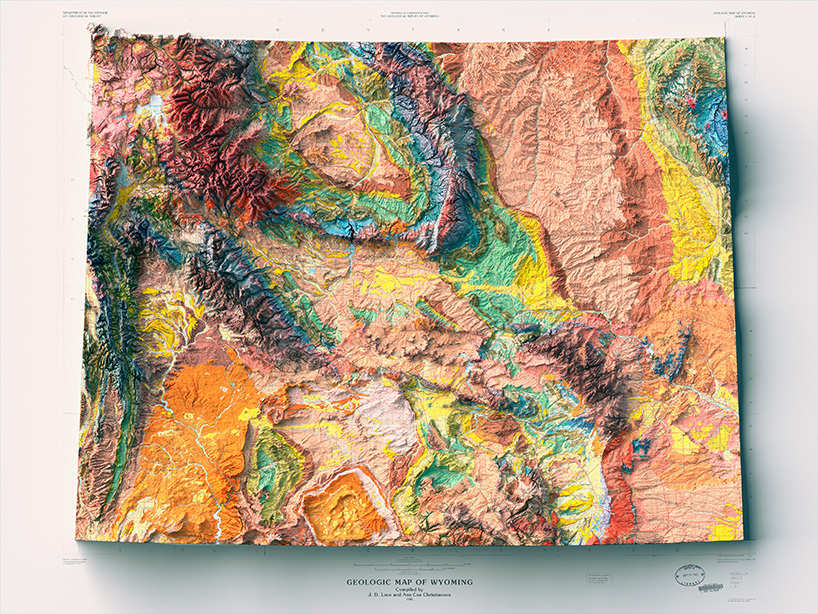 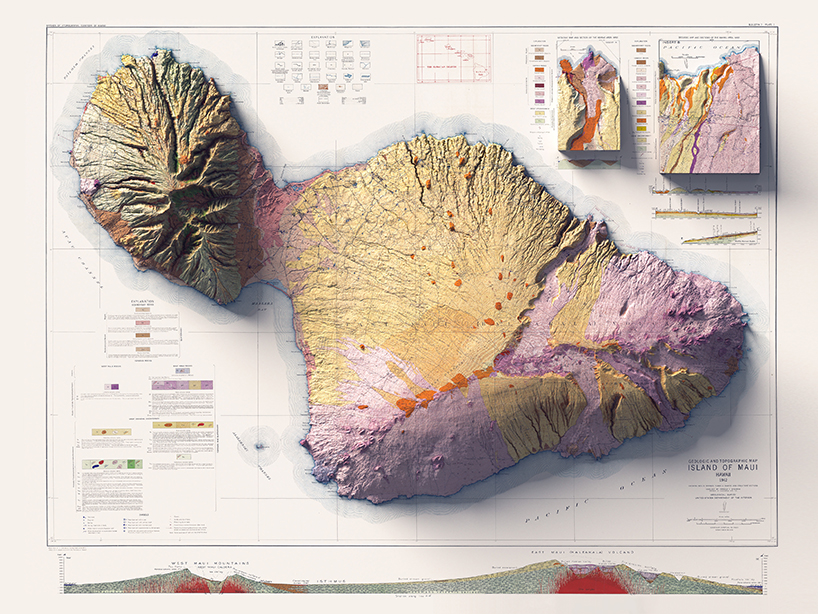 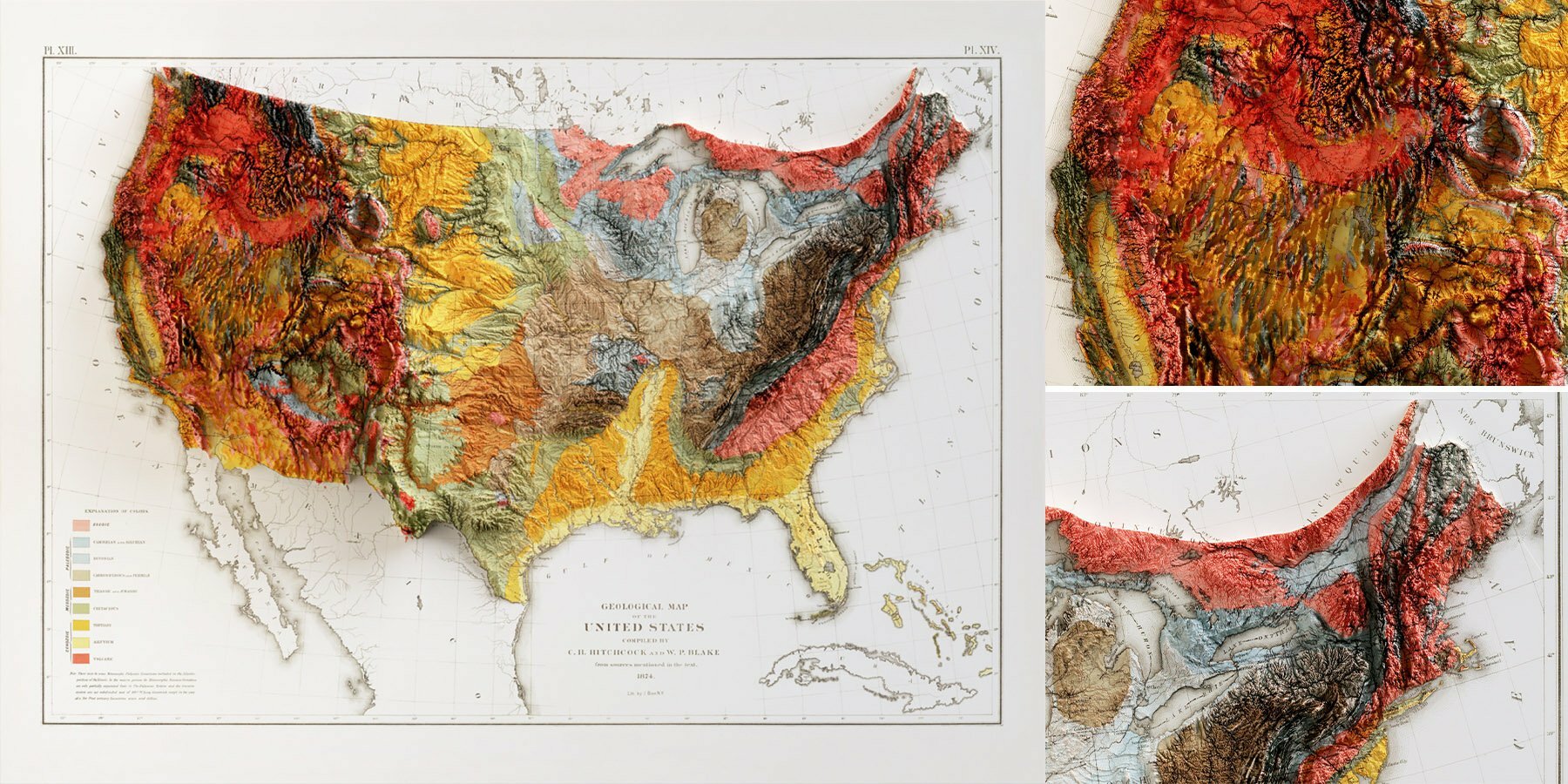 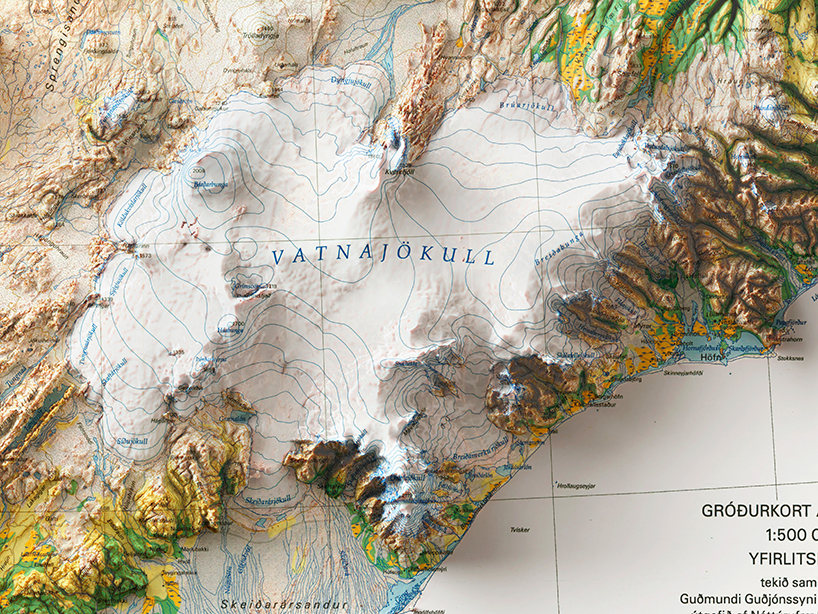 detail of a vegetation map of Iceland with shaded relief 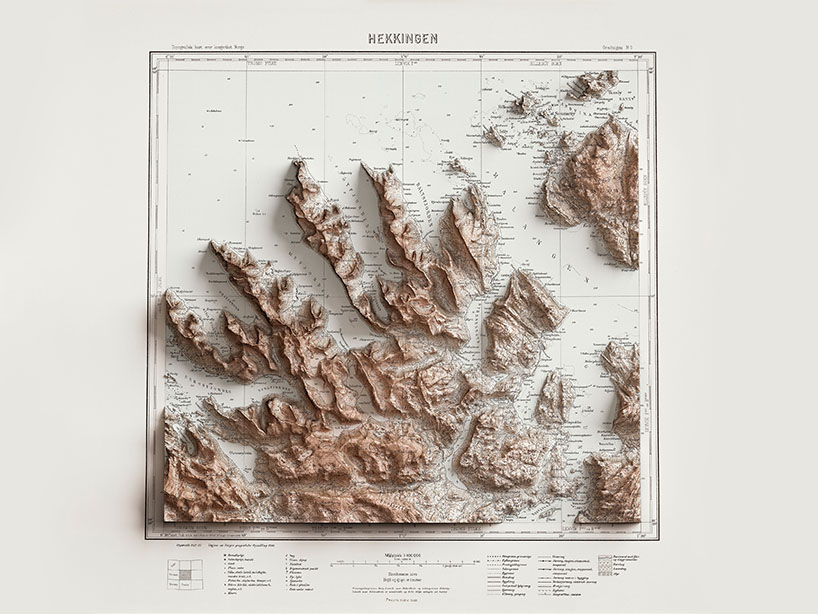 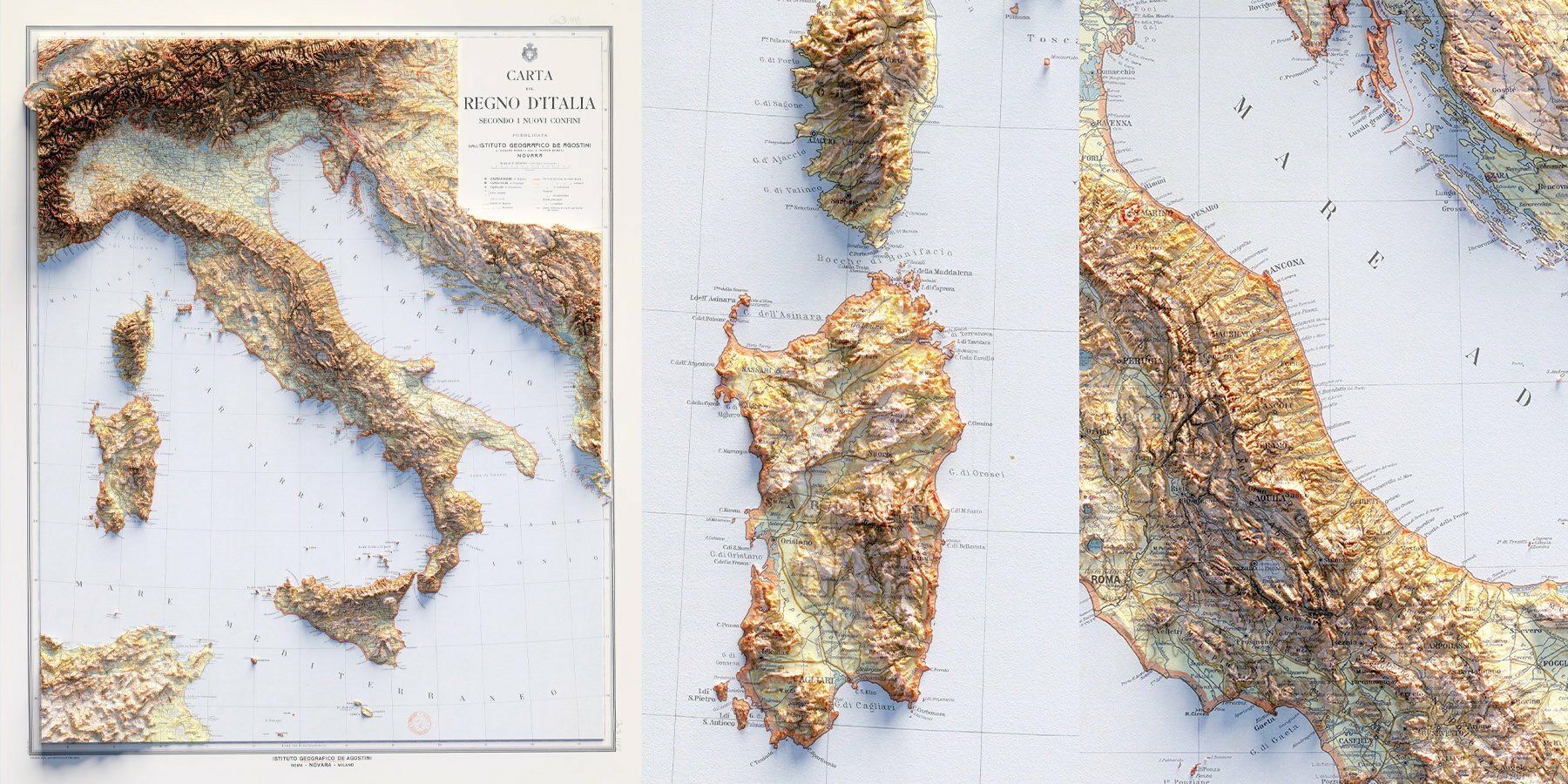 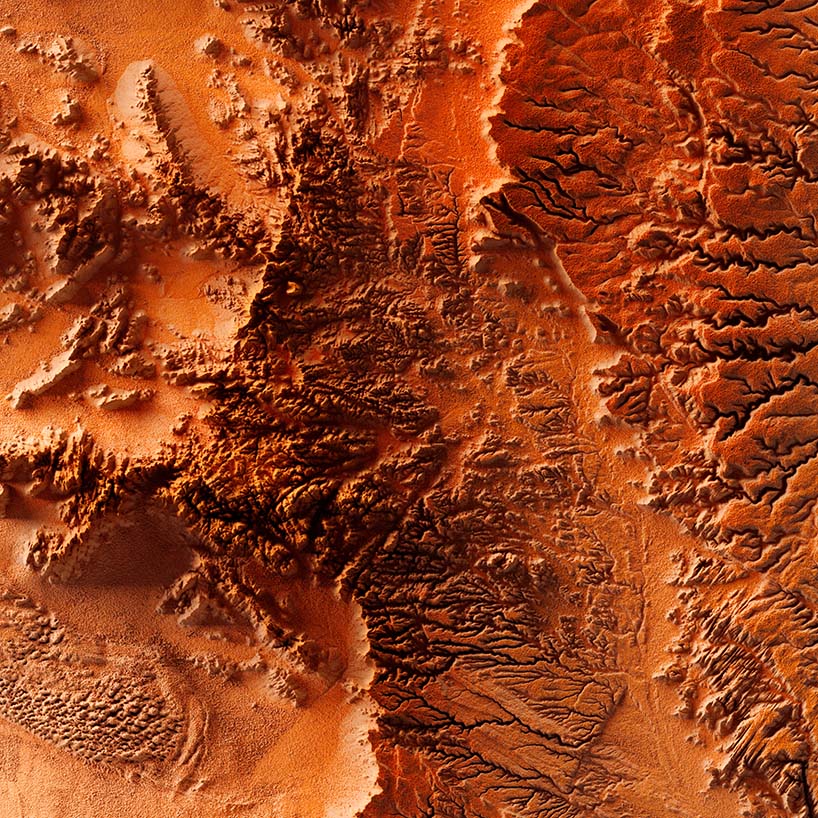 Detail of a red elevation tint of Namib Desert 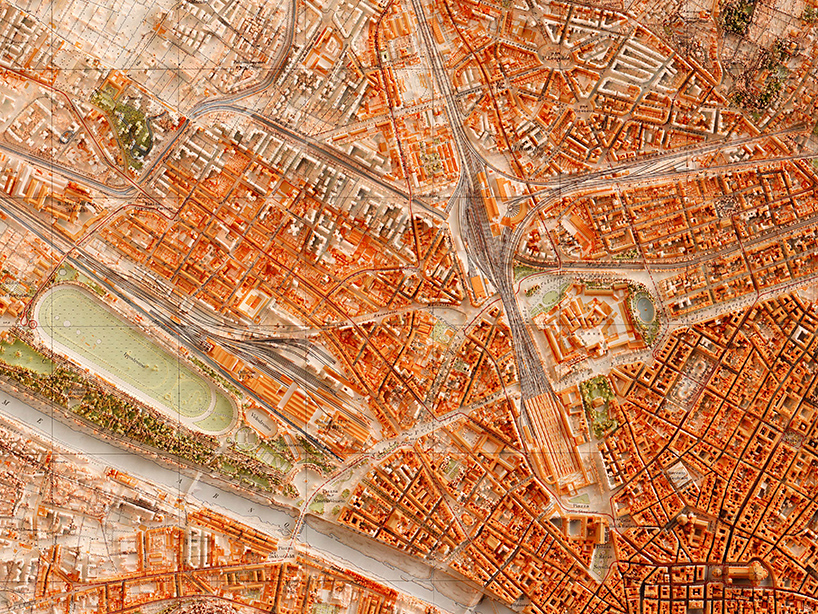 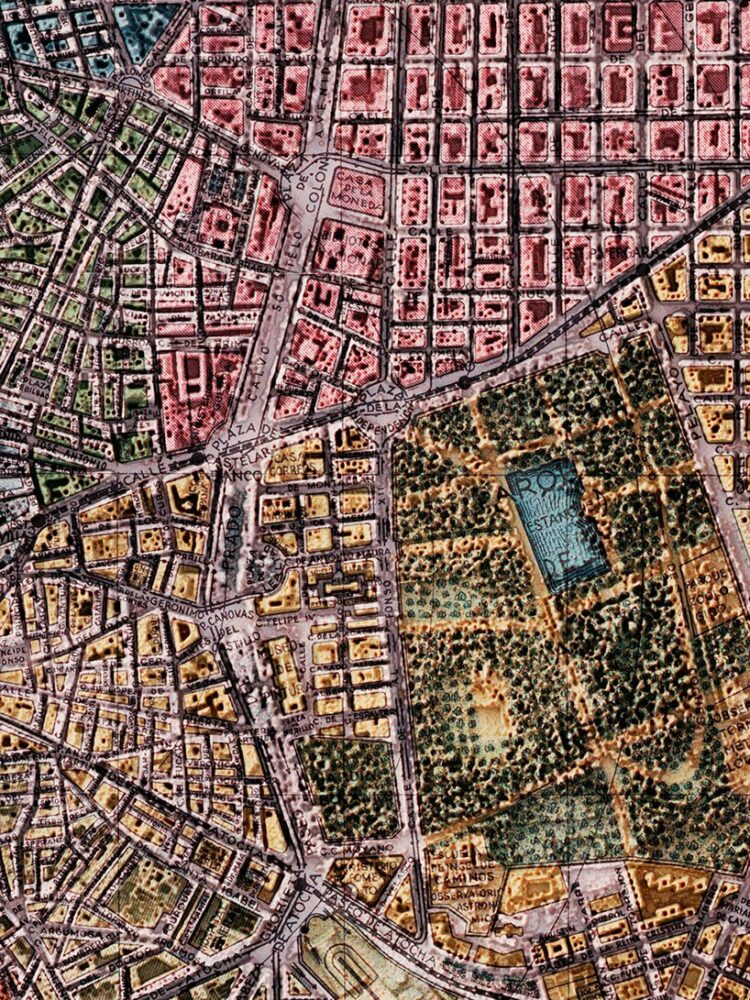 detail of a 1940 restored city map of Madrid, Spain with shaded relief 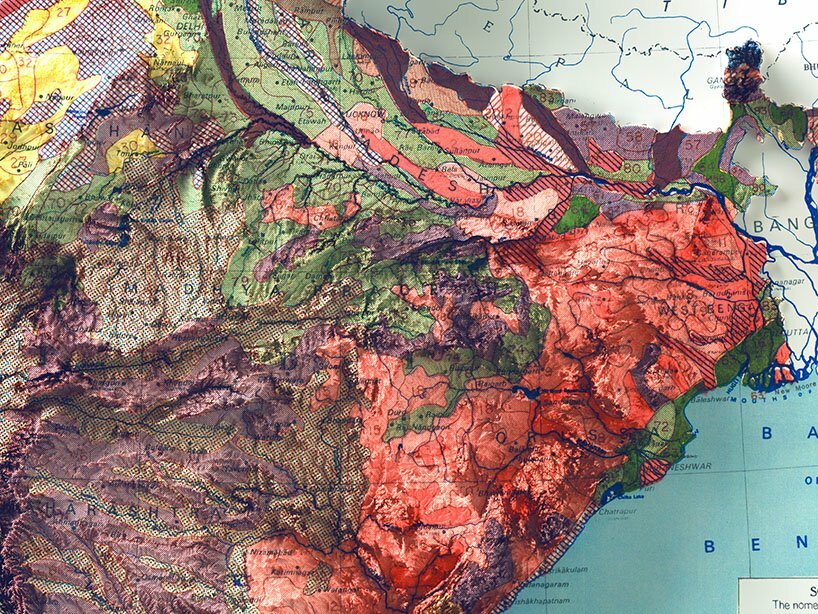 detail of a 1985 soil map of India with shaded relief 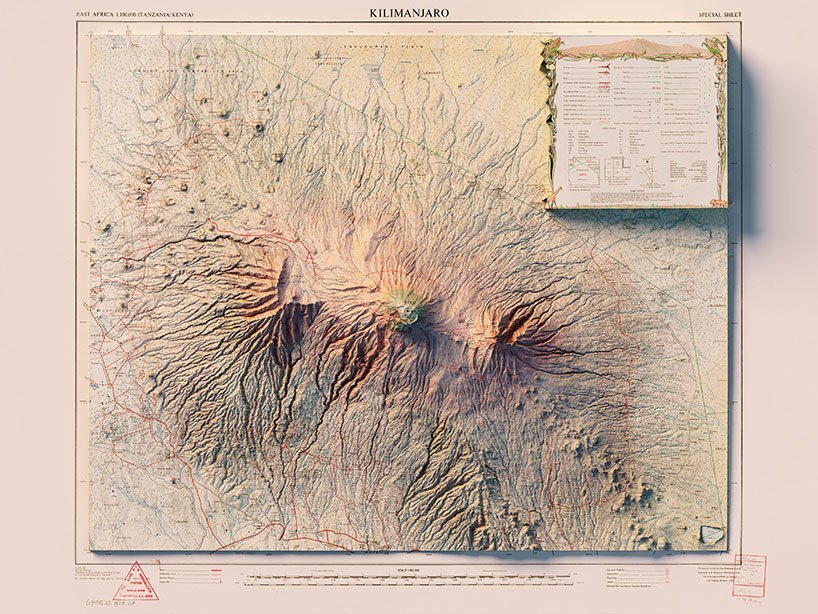 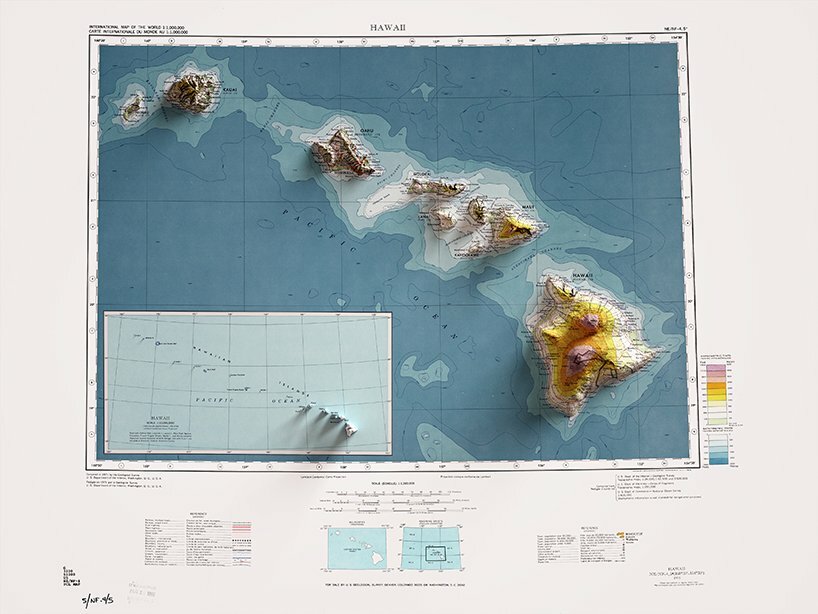 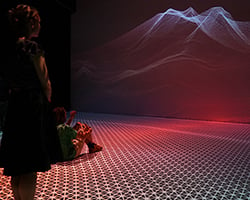 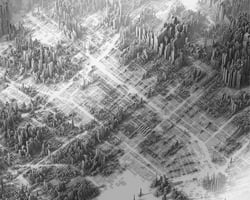