every straw in these photographs, all 168,000, could have been purchased for less than $20 USD on alibaba.com, but the partners and volunteers who put these waves together didn’t take the easy way out. someone’s mouth touched all of these at one point. they were then found on the streets or in cans or bags and collected by a non profit in vietnam called zero waste saigon for six months. then von wong got on board. then starbucks. now, a sun of LED panels has risen over an 8 X 3 kilogram sea, in the atrium of the estella place mall in ho chi minh city, where onlookers are taking photos and superhero-volunteers are high-five’ing behind the seas. 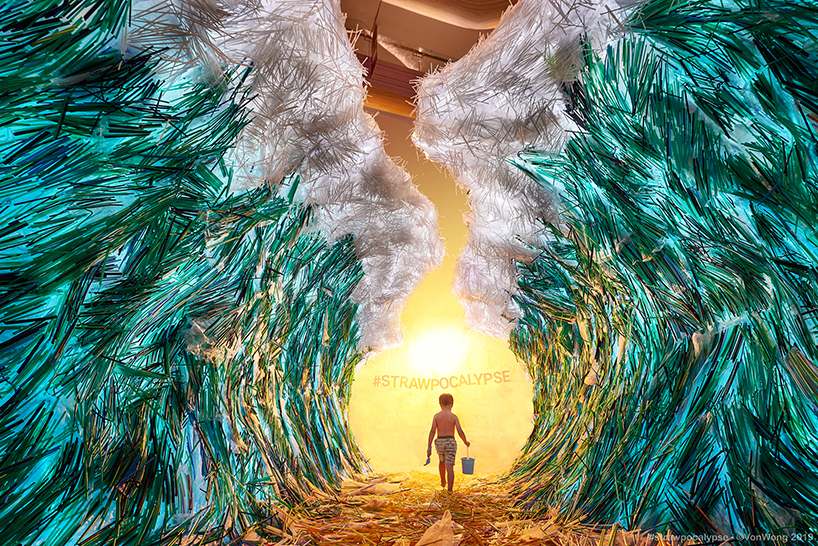 this isn’t von wong’s first time taking thousands of objects and photographing them in a way that makes us feel the weight of numbers — actually, it isn’t his first time this month. in december 2018, VW created the world’s tallest closet, hanging 3,000 articles of clothing over the average-consumer’s head. earlier in 2018, he tackled e-waste. some people throw statistics around in conversations to prove they are aware, while von puts in intense work to visualize them in beautiful ways, so that others might become more aware too. awareness isn’t a state of mind. it’s an action. it’s cleaning dirty straws for months when 100,000 could have been purchased online in 10 seconds. 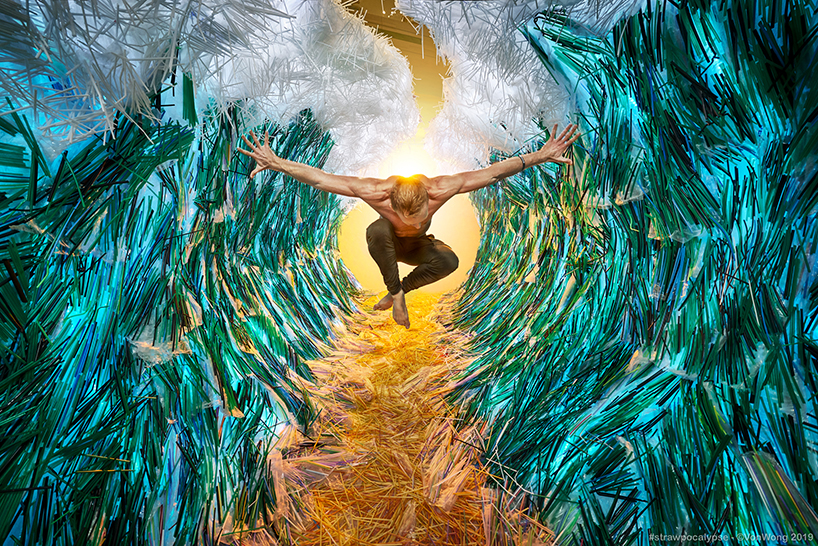 each straw we use — for 10 minutes or 10 seconds — will likely float in oceans for 450 years. by 2050, there’s estimated to be more plastic in the sea than fish. these statistics and others like them are sewn together in a spoken word story by steve connell in the video above, ‘the last straw.’ 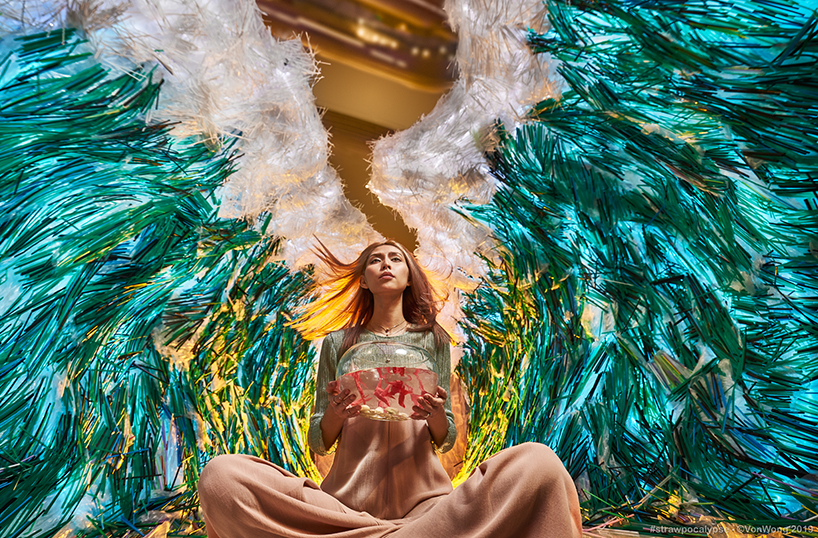 ‘every day, dozens of new volunteers streamed in to give thousands of discarded straws a second life,’ von says on his blog. groups of volunteers split up to tackle different patterns to place on the wave, early volunteers showing newcomers where to place what. it was a quick turn around of plastic bagging, light-stringing and straw adhering. you can see these volunteers and their assembly lines of joy below — they sorted straws by color, crescendoing them from straw-sand to white straw-froth. they fold in jaggedly, foaming above the passers-through as yellow mistakes crunch carelessly beneath their feet. 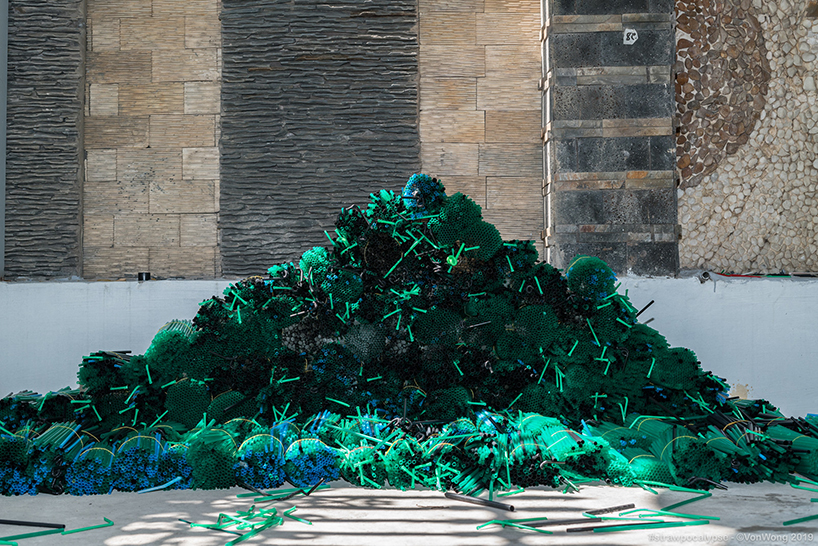 ‘the plastic problem is either out of sight, out of mind – or so omnipresent that it becomes invisible,’ according to von wong, ‘I wanted to use art to tackle both angles – by creating something beautiful and unique out of an environmental tragedy.’ 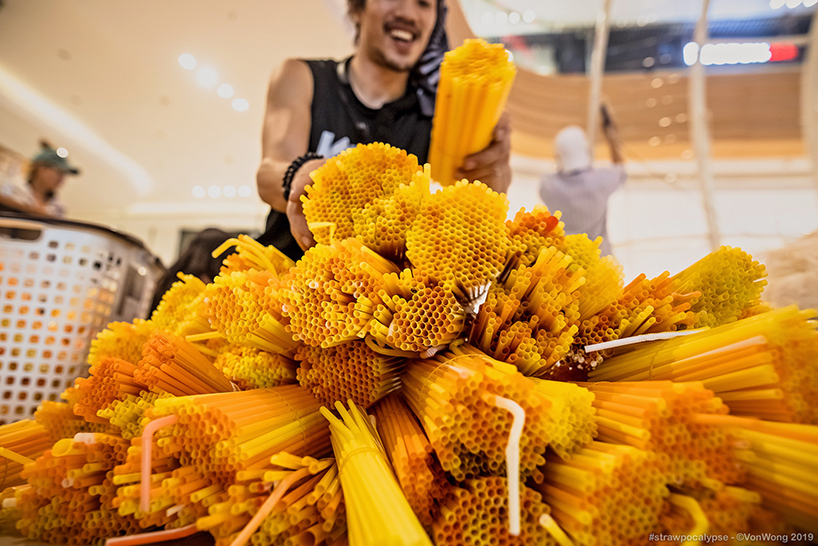 the creators of this installation have repurposed hundreds of thousands of lazy seconds into hundreds of thousand of meticulously beautiful ones. but each straw here is still virtually impossible to recycle. if you are a museum or entity who knows of a potential forever-home for #strawpocalypse, contact the creators at zero waste saigon, or von — the guy taking a selfie below. 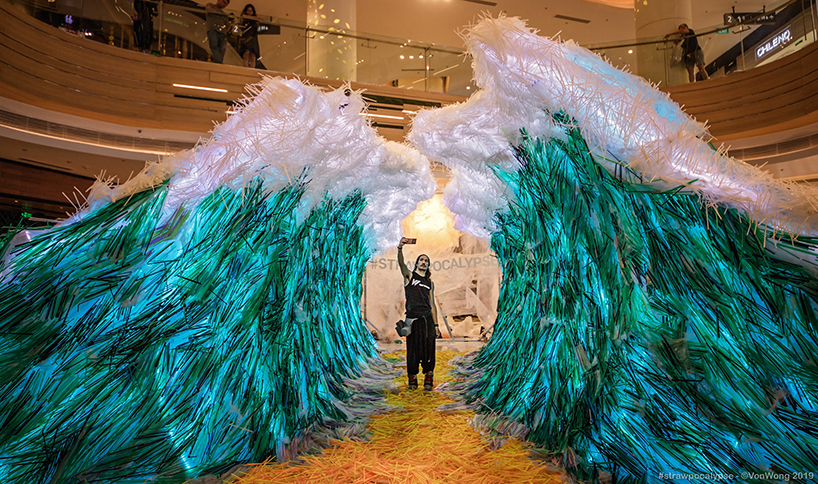 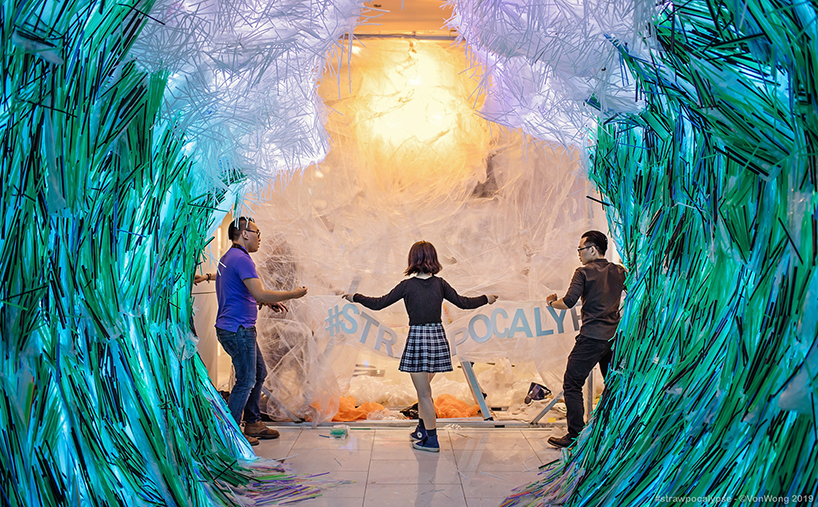 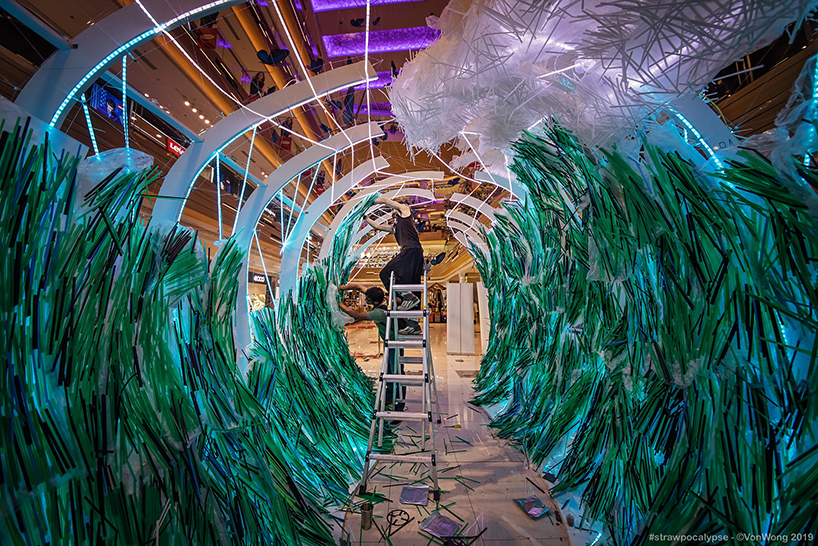 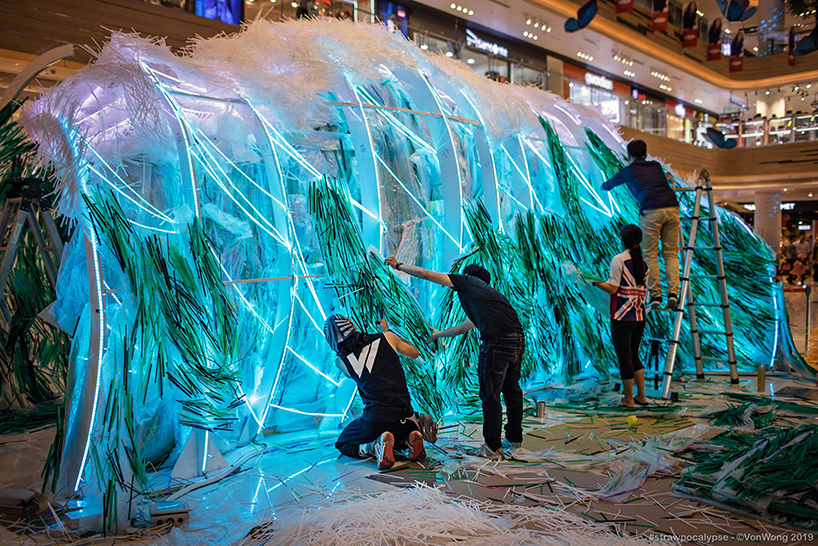 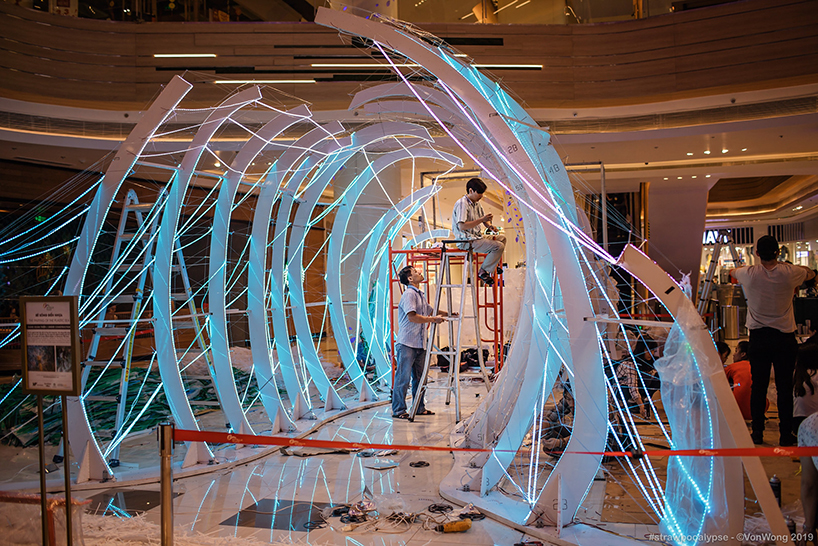 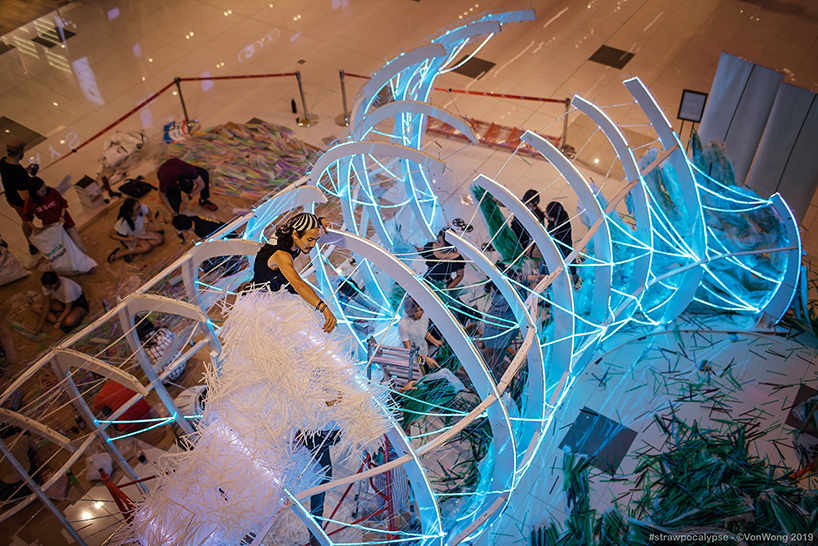 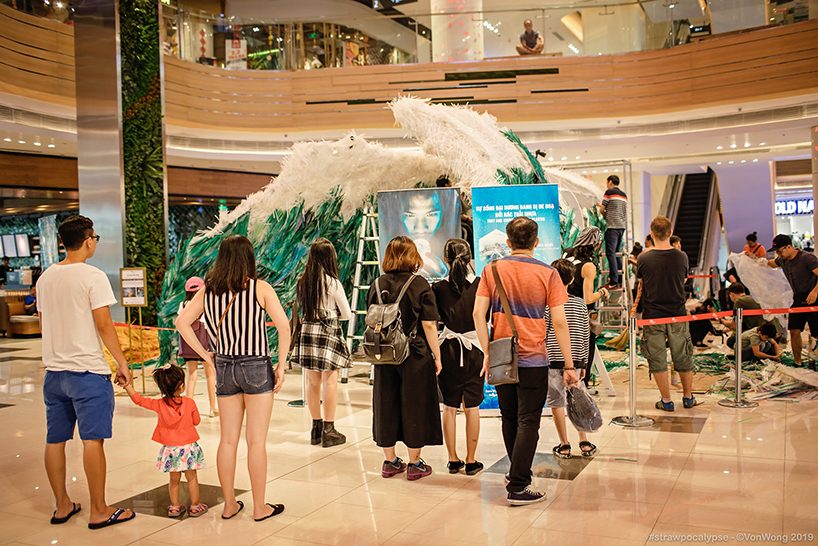 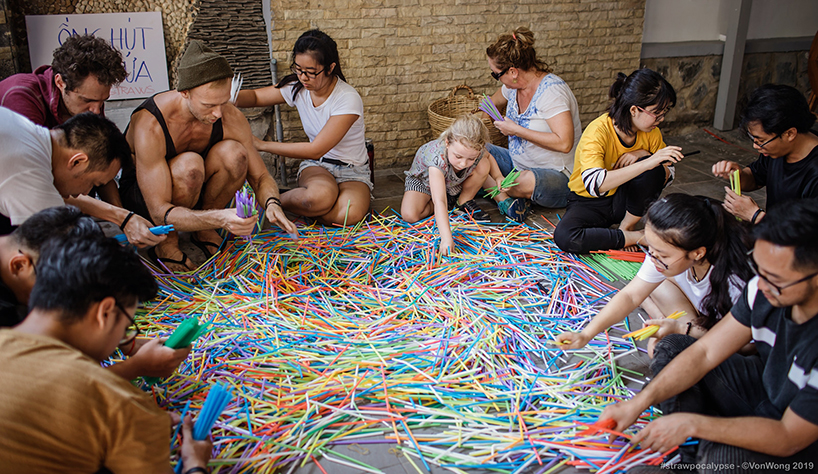 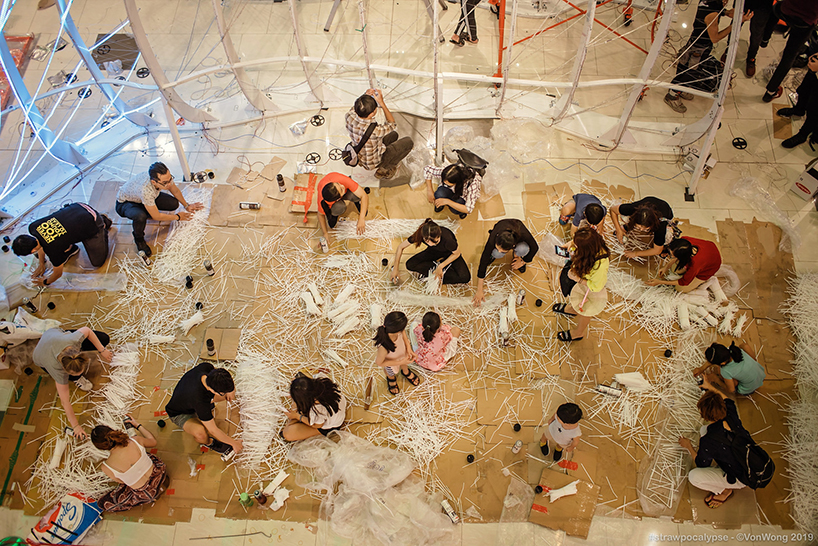 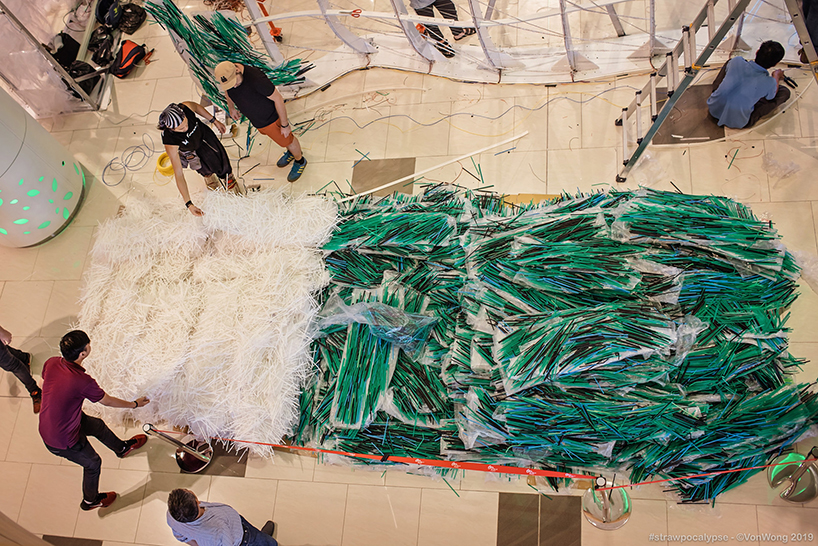 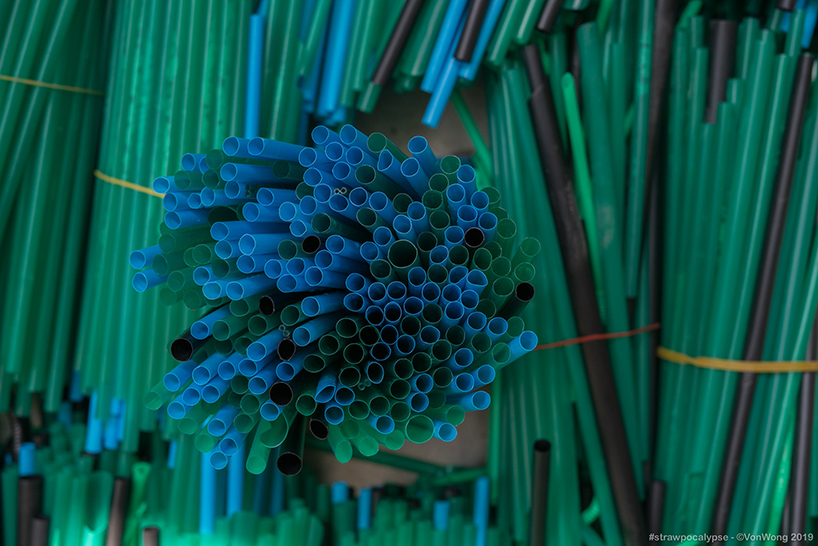