chinese conceptual artist zhang huan‘s latest exhibition ‘hope tunnel’ is a curated social project related to the 2008 earthquake in wenchuan, sichuan province. the show features the remains of the train which crashed during that period of disaster. according to huan, it allows people to reflect on the scale of the catastrophe, commemorate the victims and contemplate the possibility of reconstruction and the challenges that lie ahead. 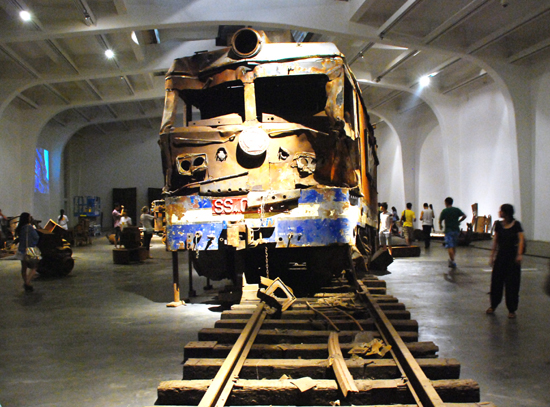 ‘it is a witness to history. at a time when the whole world is looking forward toward the future, preserving the past seems more important than ever. reflecting on the disaster, investigating the causes, mitigating future dangers and finding ways to live in harmony with our environment rather than trying to conquer it – that’s where the real future is, the tunnel of hope that leads us to tomorrow.‘- ZH 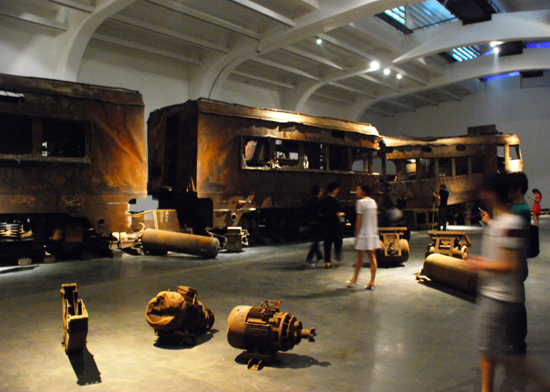 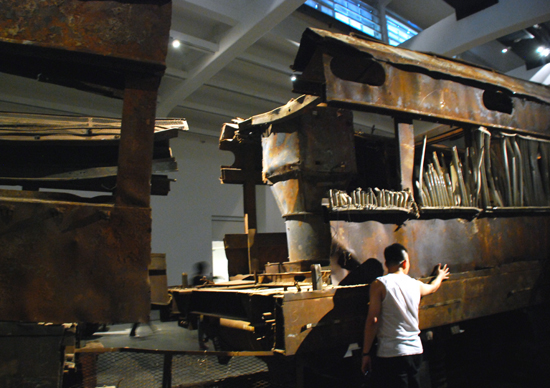 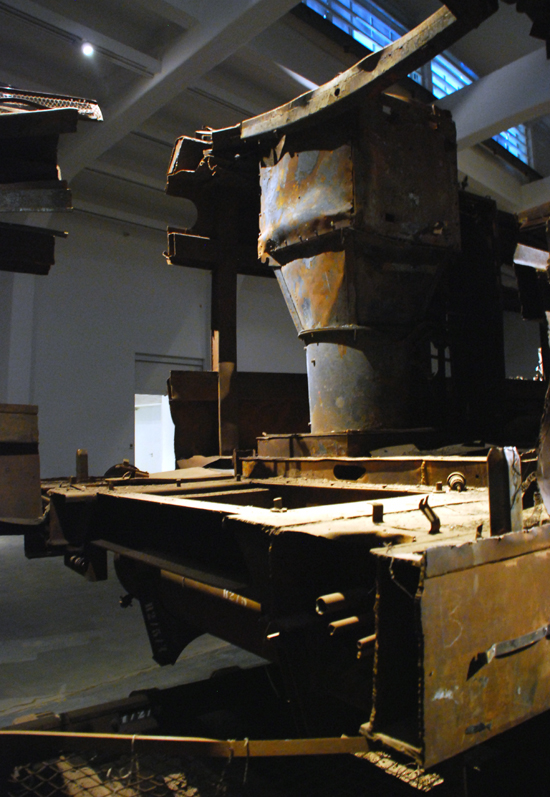 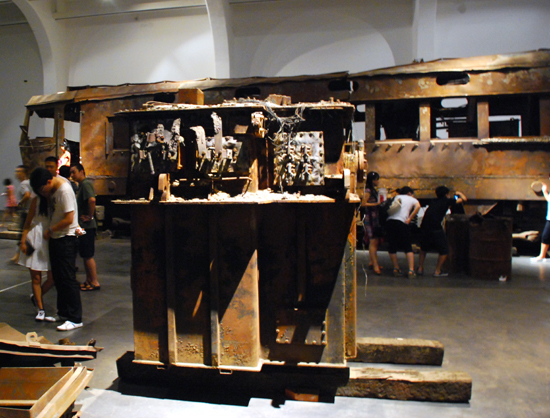 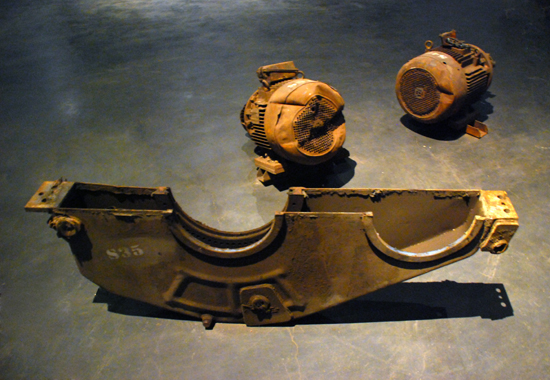 zhang huan was born in 1965 in anyang, henan. he currently lives and works in shanghai. before relocating to new york in 1998, he was heavily involved in the beijing art scene in the 1990s. in america, he became a full time artist working in a variety of different mediums and giving artistic performances in major cities worldwide. in 2005, he returned to shanghai and established the zhang huan studio. with his desire to expand new realms and develop new forms of creative processes, he pioneered the ash painting technique amongst many others such as sculpting in ox-hide, wooden door carvings and woodcuts with feather additions. more recently, huan directed and stage-managed the lyric opera ‘semele’ performed at the la monnaie royal theatre in belgium. he is the first chinese, modern artist to direct a lyric opera. 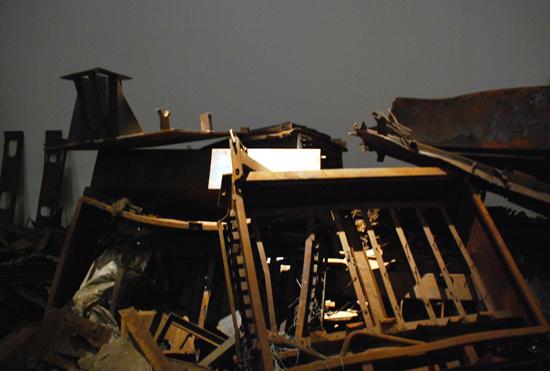 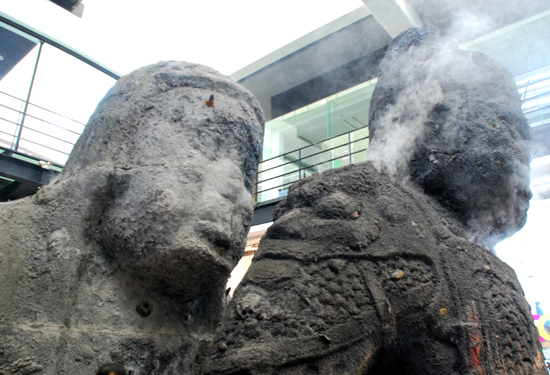 in addition to the main exhibition are large oversized sculptures titled ‘military officer’ and ‘cultural officer’ found in the lobby of UCCA. zhang huan crafted them using incense ash collected from some twenty temples in and around shanghai. the process of doing this required great patience, as no monk or abbot would accept payment for such material. huan had to convince the temples of the purity of his intent before removing them off-site to his studio. during his production process, he sorted and mixed the ash with a binding agent before molding them in various shapes. overtime, the sculptures will shed a certain amount of their surface material, highlighting the ephemeral nature of art. 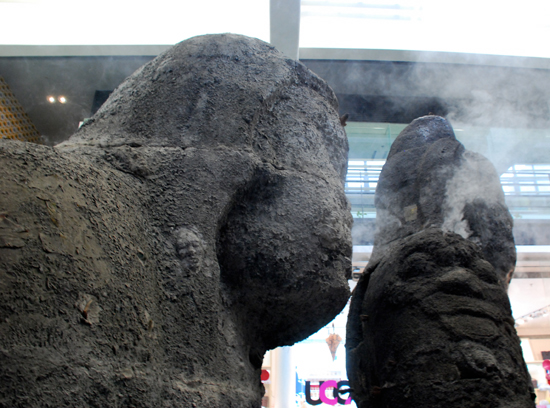 side view of ‘military officer’ and ‘cultural officer’ image © designboom 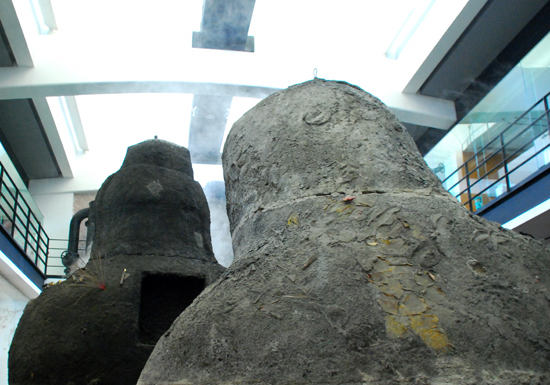 back view of ‘military officer’ and ‘cultural officer’ image © designboom 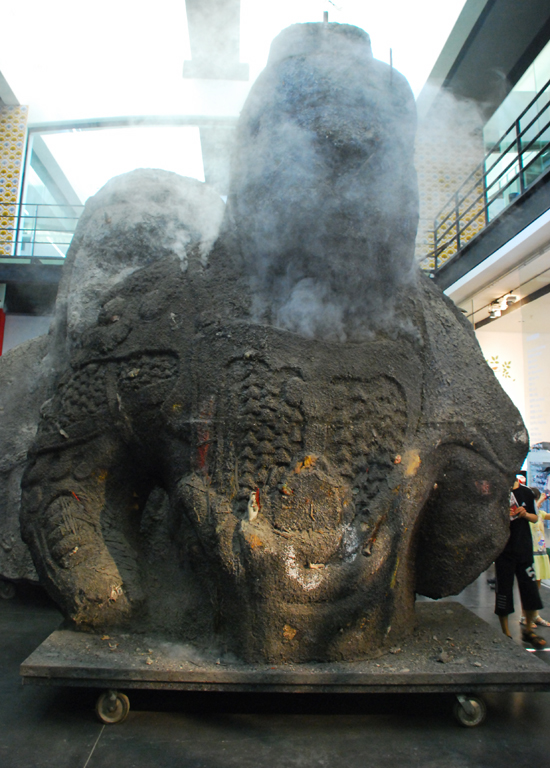