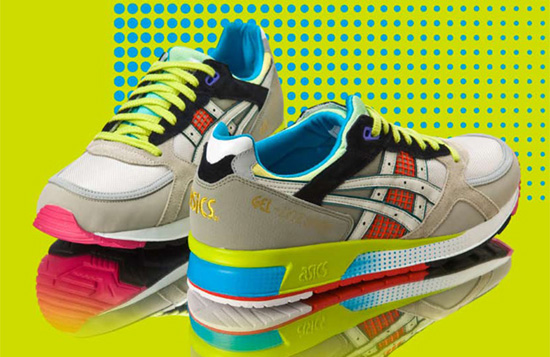 asics and mita sneakers have collaborated on the gel-lyte speed which will hit the market this coming september. the new shoe is based-on the gel-light III designed in 1990.

tropical influence
according to asics the color tone of the 500-pair gel-lyte speed limited edition was inspired by tropical fruits that bring to mind a comfortable, lightweight and cushioned run along a tropical island beach. the upper uses gradation to further fortify the summer feel. some of the nylon materials in the upper were inspired by the cotton-woven fabrics often used in hawaiian summer clothing.

background
the first gel-lyte speed shoes were launched in the US in 1991 and the following year in japan. the shoes feature the split tongue construction; an idea put forward by a shoe developer at the asics head offices in kobe in 1988 to prevent the tongue from slipping inside while running. long-distance runners started taking to this new idea, and the split tongue system was used in gel-lyte III and later in gel-lyte speed.

May 09, 2021
unfolding the art of pleating: history + techniques that have fascinated the world of fashion
human touch, tradition, experience and entrusted knowledge is still very much at the heart of this painstaking and time-honored craft.
design
486 shares
connections: 78

May 08, 2021
a timeline of new york's tallest buildings, from a wooden observatory to one WTC
starting in the mid 1850s, designboom traces the history of the city's skyscrapers.
architecture
683 shares
connections: +1790